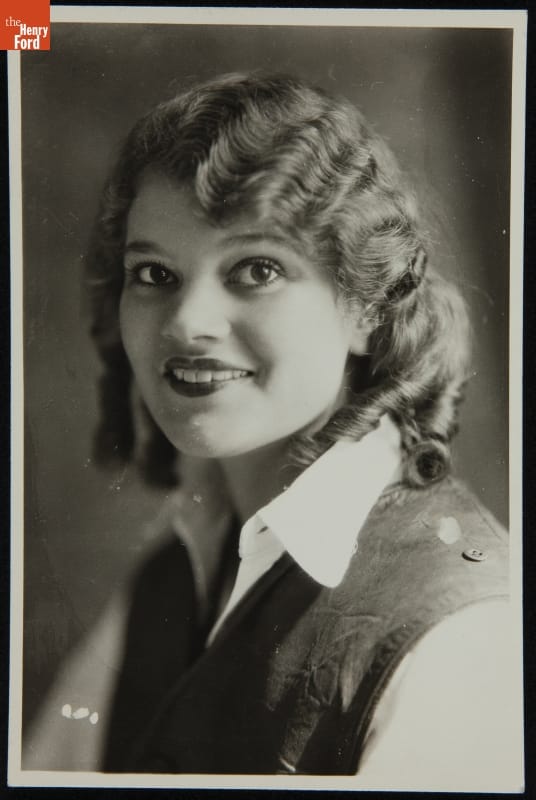 Secretary. Driver. Mechanic. Lecturer. Explorer. Cinematographer. Filmmaker. All of these job titles, and many more, were held by one extraordinary woman in the 1920s. Her global adventures, visiting more than 40 countries on four continents, earned her the moniker, “The World’s Most Widely Traveled Girl.” And throughout it all, Aloha Wanderwell Baker challenged societal norms, built a career for herself, and created an inspiring legacy of curiosity and resourcefulness.

The young woman who would become Aloha Wanderwell Baker was born Idris Galcia Hall in Winnipeg, Alberta, Canada, in 1906. After her father was killed in action at the Third Battle of Ypres during World War I, Idris’ mother decided to move with both of her daughters to Europe. Young Idris, enrolled in a French convent school, longed for adventure and world travel. According to her memoir, Call to Adventure!, she was a girl who, “desired to sleep with the winds of heaven blowing around her head, and who preferred the canopy of stars and the Mediterranean moon to the handsome but dust-catching and air-repelling draperies of the school furnishings.” With these yearnings, Idris’ time at the school would not be long. 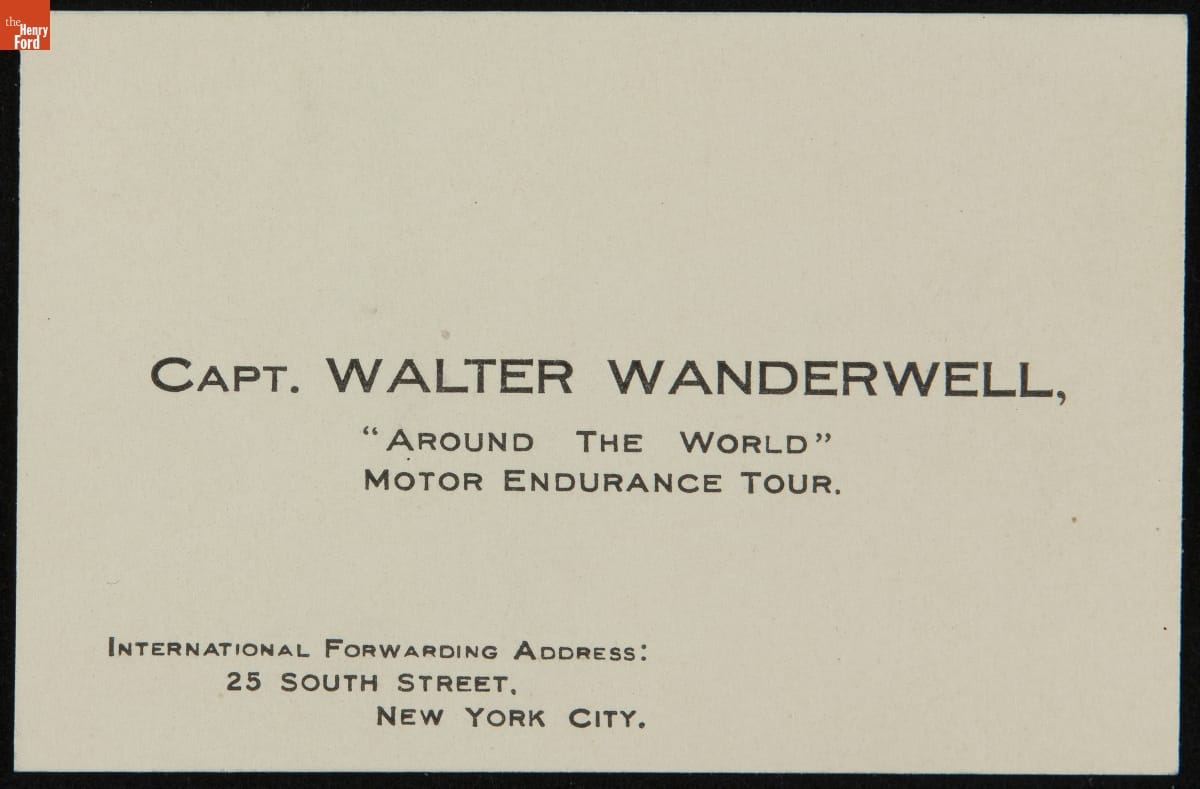 In 1922, young Idris’ future would be forever changed when a traveler known as Captain Walter Wanderwell arrived in Nice, France. Cap, as he was more commonly known, was Polish-born Valerian Johnannes Pieczynski. In 1919, Cap and his wife Nell founded the Work Around the World Educational Club, or WAWEC, to promote world peace, provide educational opportunities, and monitor global disarmament. To accomplish these goals, Nell and Cap competed in a global driving race, the winner being the team to rack up the most miles. Along the way, the teams would sell promotional pamphlets, host lectures, and screen their adventure films as a means to raise money and educate the public. Corporate funds were also sought, such as Cap contacting Henry Ford in 1922 about purchasing the negatives for educational films that were shot. By the time Cap wrote that letter to Ford, he and Nell were physically separated, in Europe and North America, and essentially separated in their marriage. 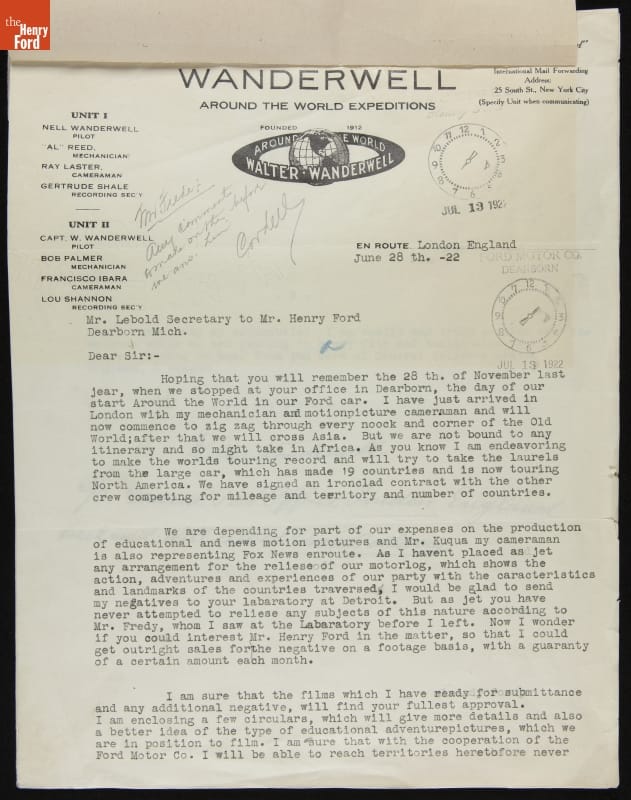 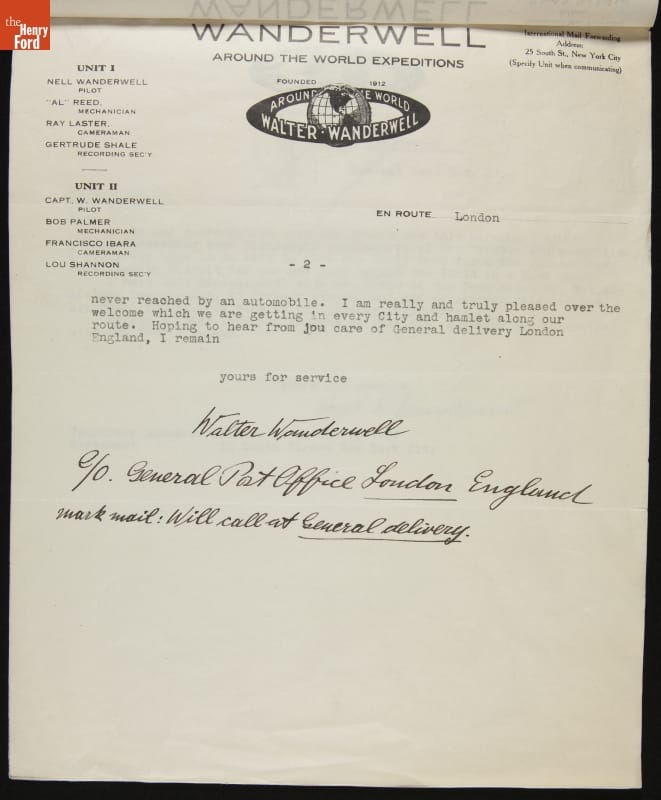 And so it was in Nice, in October 1922, that Cap and Idris’ paths would cross, and her future would forever be changed. In her memoir, she talks about seeing an advertisement for Cap’s lecture in the local newspaper, sneaking out of school to attend. Utterly inspired and captivated by the images she saw, young Idris spoke with Cap afterward. During the conversation, he mentioned his need for a new expedition secretary. The Nice newspaper also carried an ad for this position with the headline, “Brains, Beauty and Breeches-World Tour Offer for Lucky Young Woman.” Going against contemporary norms, the woman who accepted this position would forego skirts for breeches, promise not to marry for at least three years, and be prepared to rough it through Africa and Asia. At the age of 16, Idris, with her mother’s permission, joined the Wanderwell Expedition and became known as Aloha Wanderwell. 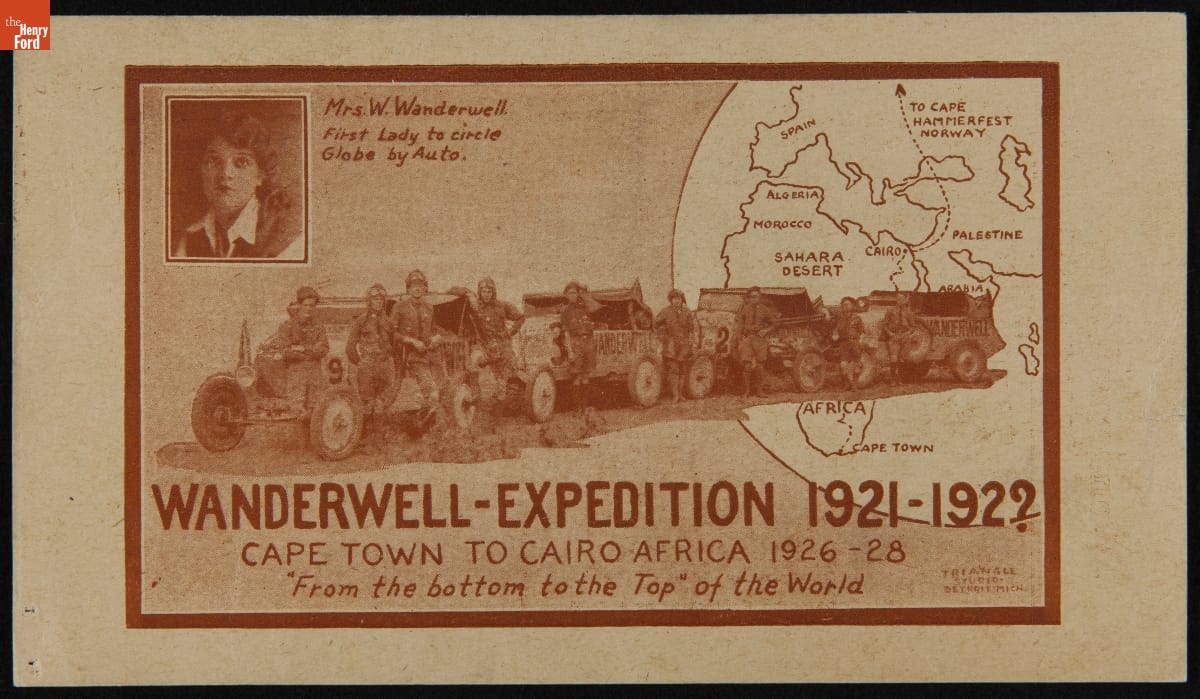 Between October 1922 and December 1923, the Wanderwell Expedition crisscrossed Europe in their Model Ts. Spain, Italy, France, Germany, Poland - all were visited, some multiple times. Along the route, Aloha learned the skills that would carry her career into the future. After leaving the tour for a few months due to an argument with Cap, Paris became a bore and Aloha longed to be back on the road. She tracked the expedition down in Egypt, and met up with the crew in March 1924. 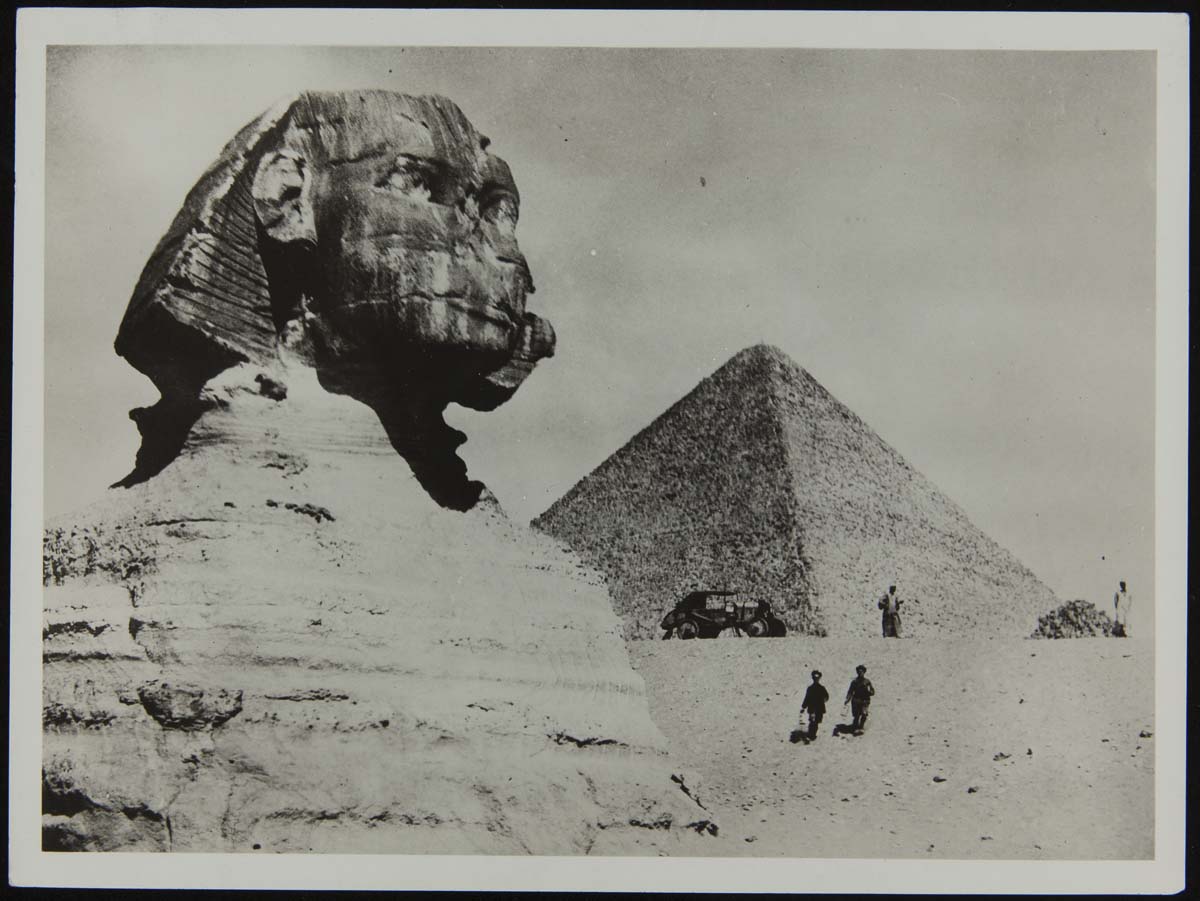 Aloha Wanderwell Arrives at the Sphinx, 1924

After Cairo, the expedition wound its way through the Middle East, then sailed on to Pakistan and India. They covered more than 2,200 miles before sailing to Malaysia. The travelers then made their way up to Cambodia, where they marveled at Ankor Wat, and then went on to Singapore, Hong Kong, and Shanghai. They went up through Tientsin, Peiping, and Murkden before being granted visas to travel to Siberia. Japan was visited after Russia, and then the Wanderwell Expedition sailed for North America. 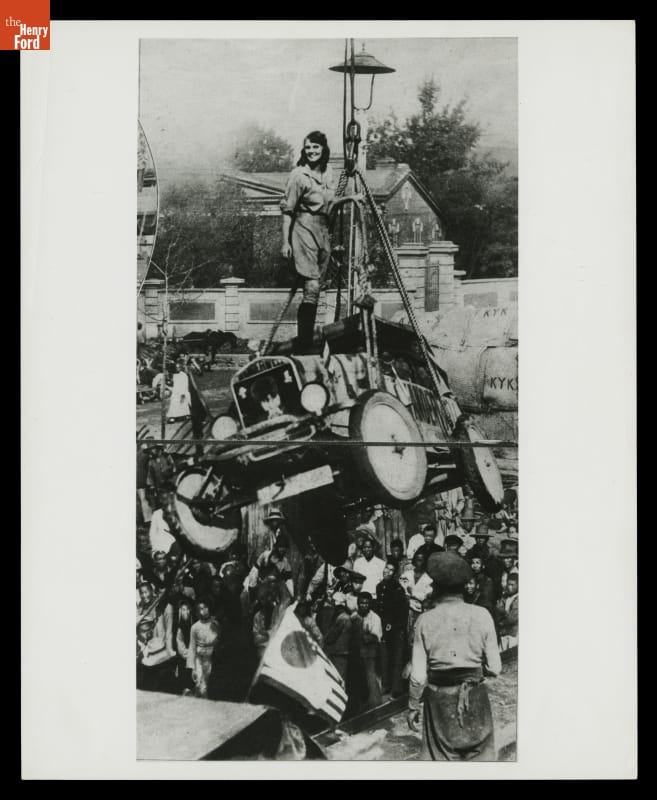 They made landfall in Hawaii, where Cap filmed Aloha next to the Halemaumau volcano. When the expedition arrived in California, Cap left for a few weeks, traveled to Florida, and legally divorced Nell.  Upon his return to California, Cap proposed to Aloha, and they wed in April 1925. Over the next few months, they drove throughout the American West and Midwest, ending up in Detroit that August and ultimately ending in Florida. Their first child, a son named Valri, was born there that December. 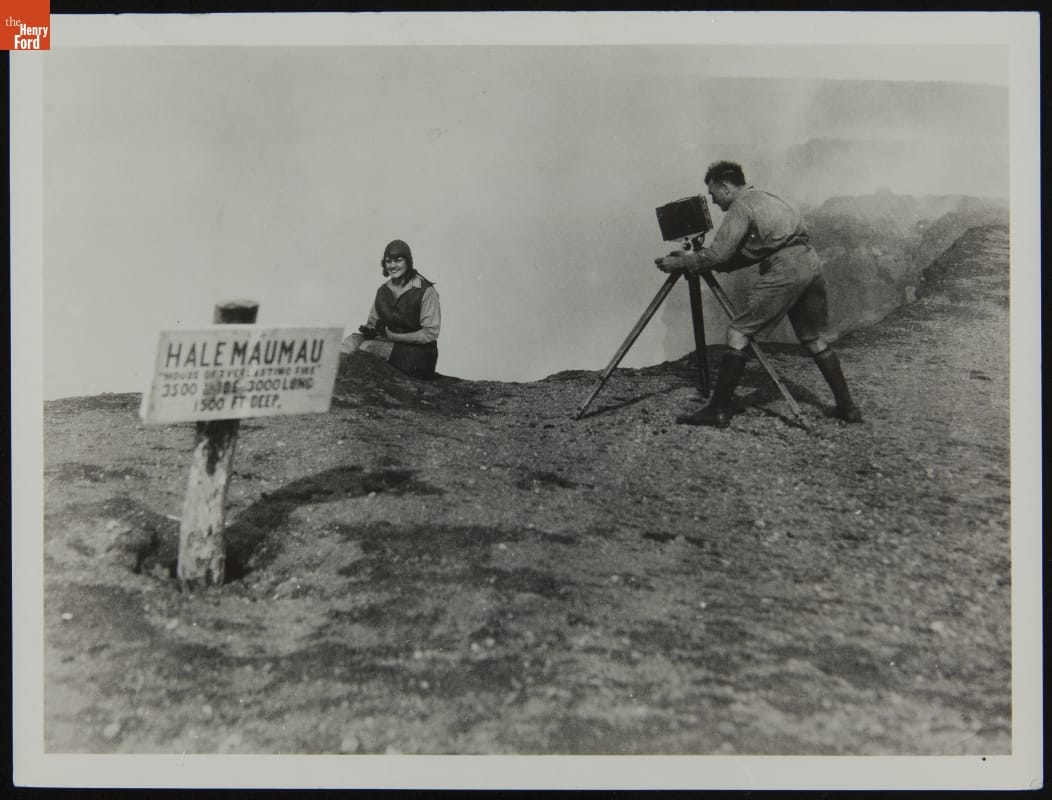 In 1926, the Wanderwells were traveling through Cuba, Canada, and the northeastern United States before they sailed for South Africa, where Aloha reunited with her mother and sister. There, in April 1927, Aloha gave birth to the couple’s second child, a son named Nile. Three weeks later, with Aloha’s mother caring for the children, the expedition left again to traverse the eastern coast of Africa. North they drove, through Zimbabwe, Mozambique, Tanzania, Uganda, and Kenya, where on October 13, 1927, Aloha celebrated her 21st birthday in Nairobi. This journey ended in France, where the Wanderwells reunited with their children and the family returned to the United States. The film documenting these journeys, With Car and Camera Around the World, debuted in 1929. 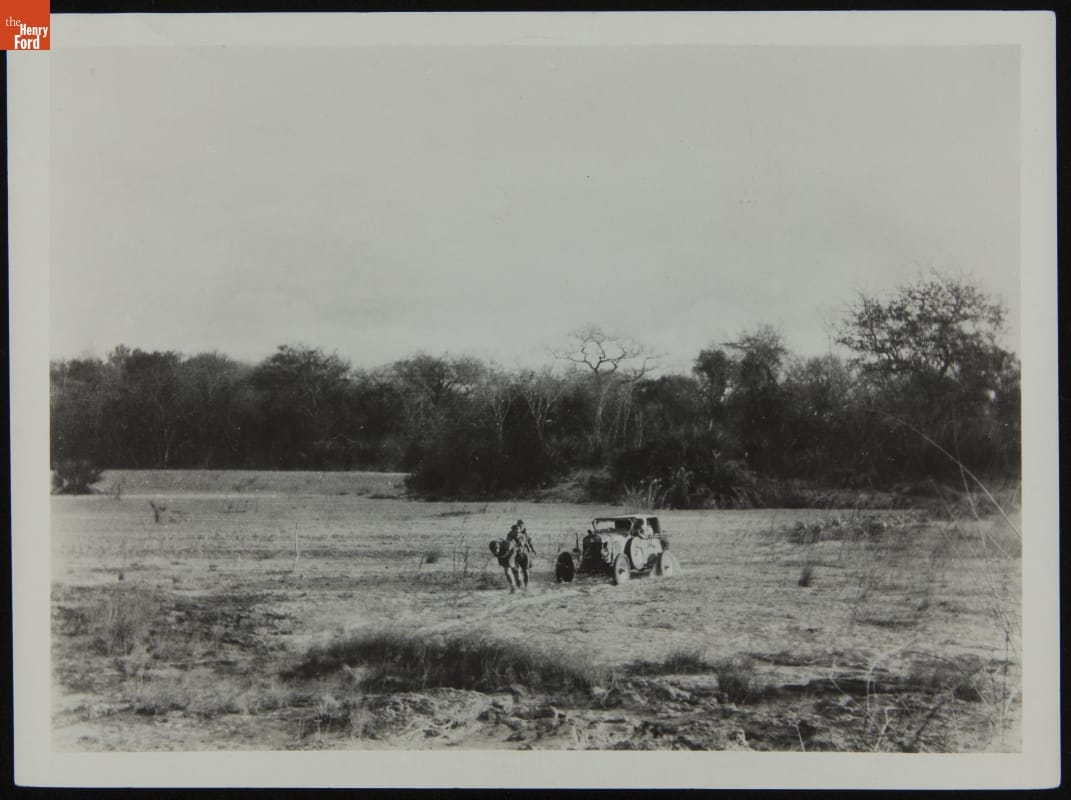 The following year in 1930, Cap and Aloha were traveling to Brazil, visiting the Mato Grosso region in an effort to search for lost British explorer Lt. Colonel Percy Fawcett. Flying to the interior of the Amazon rainforest, the Wanderwells’ plane had to make an emergency landing, ending up in the territory of the Bororo tribe. Over the next month, Cap and Aloha befriended them, and when Cap left to obtain replacement parts, Aloha stayed with the Bororos and filmed her experiences. The resulting film, Flight to the Stone Age Bororos, remains part of the Smithsonian’s anthropological film library to this day. Another film focusing on this trip, The River of Death, can be viewed through the Library of Congress.

The next Wanderwell expedition was to be an ocean voyage throughout the Pacific. A yacht, The Carma, was being fitted out for this journey, although it was not to be. In December 1932, Captain Wanderwell was shot and killed on board, a case that remains unsolved. The year after Cap’s death, Aloha married former WAWEC cameraman Walter Baker. The couple continued to travel and film their adventures. Over the years, the travel grew less, but Aloha continued to give lectures and presentations about her adventures. Aloha Wanderwell Baker passed away in Newport Beach, California, in 1996, about a year after Walter.

Aloha’s films, photographs, and writings have allowed later generations to learn of this extraordinary woman who followed her passion. In an age where women were expected to wear dresses and work within the home, she wore breeches and traveled the world. Aloha cultivated skills in jobs that were traditionally reserved for men, and used that knowledge to further her career. She turned a desire to be out in the world into a lifetime of learning and exploring. And in the end, her desire to “sleep with the winds of heaven blowing round her head” drove her to follow her heart, keep an open mind, and learn from the world.

Janice Unger is Processing Archivist at The Henry Ford.