Ford Methods and the Ford Shops

In 1913, Ford Motor Company combined the standardization of interchangeable parts with the subdivision of labor and the fluid movement of work to workers to create the world’s most influential assembly line. We are unusually fortunate that two keen observers of industry, Horace Lucien Arnold and Fay Leone Faurote, were there to document it.

Arnold, a correspondent for The Engineering Magazine, grasped the significance in Ford’s work and began a series of articles on the company’s Highland Park factory. After Arnold’s untimely death, Faurote completed and compiled the articles in the 1915 study Ford Methods and the Ford Shops. The book’s detailed descriptions, numerous photographs and careful diagrams give us a vivid window into Highland Park at a seminal moment in manufacturing history.

Looking back now, the most remarkable aspect of Ford Methods and the Ford Shops is the liberal level of access Ford gave to its authors. It is difficult to imagine Google or Apple opening their doors to today’s press and giving unfettered access to employees, workspaces, and sensitive production figures. The company’s cooperation speaks volumes about Henry Ford’s confidence in Highland Park. He knew that his methods were far ahead of his competitors, and there was little fear of them catching up too quickly. 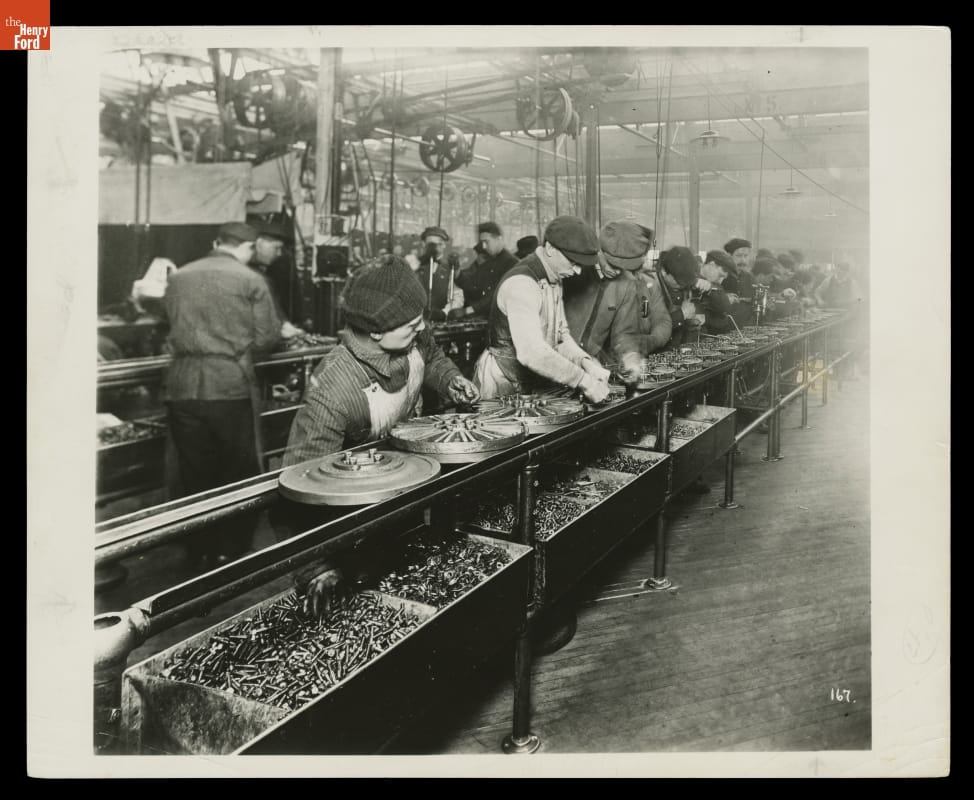 The assembly line came to Ford Motor Company in stages. Around April 1, 1913, flywheel magnetos were placed on moving lines. Instead of one worker completing one flywheel in some 20 minutes, a group of workers stood along a waist-high platform. Each worker assembled some small piece of the flywheel and then slid it along to the next person. One whole flywheel came off the line every 13 minutes. With further tweaking, the assembly line produced a finished flywheel magneto in just five minutes. 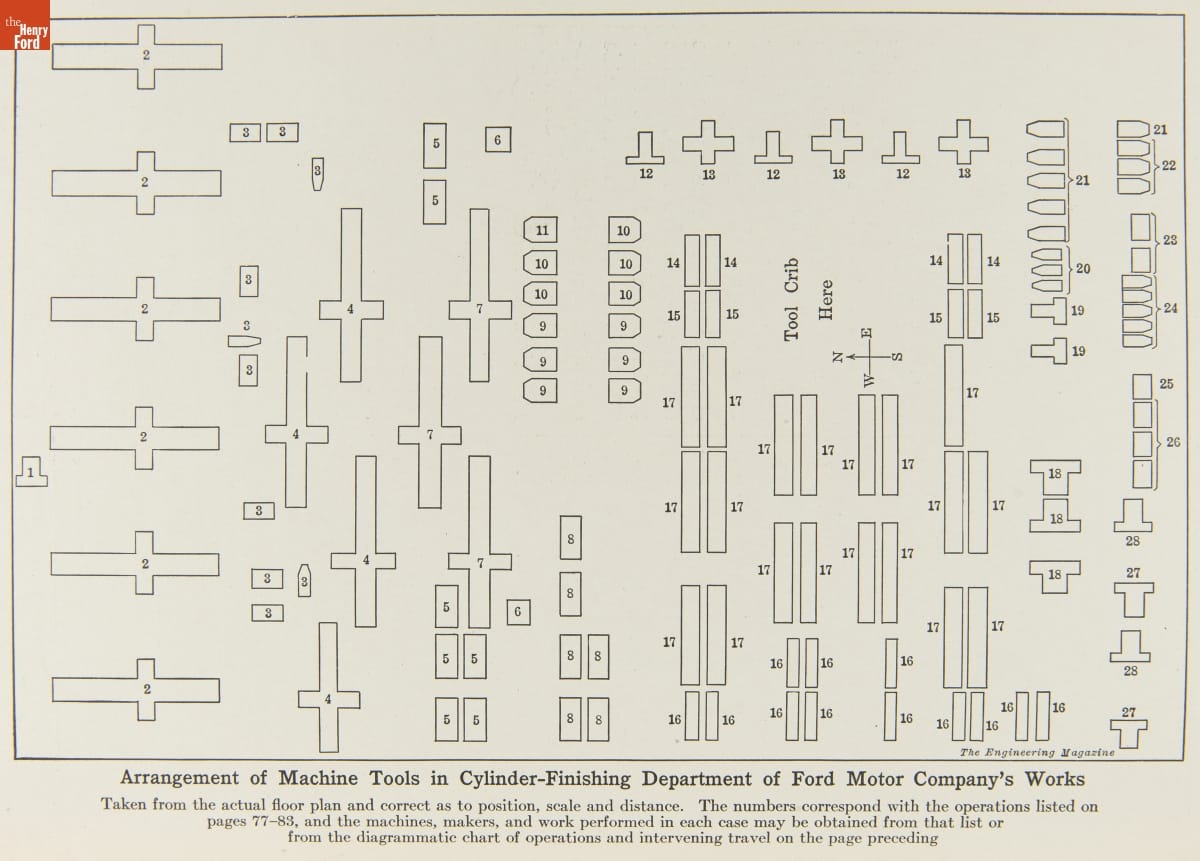 Flow charts and maps in the book illustrated the logical, sequential arrangement of machine tools at Highland Park. / THF600582

It was a genuine “eureka” moment. Ford soon adapted the assembly line to engines, and then transmissions, and, in August 1913, to complete chassis. The crude “slide” method was replaced with chain-driven delivery systems that not only reduced handling but also regulated work speed. By early 1914, the various separate production lines had fused into three continuous lines able to churn out a finished Model T every 93 minutes—an extraordinary improvement over 12½ hours per car under the old stationary assembly methods. 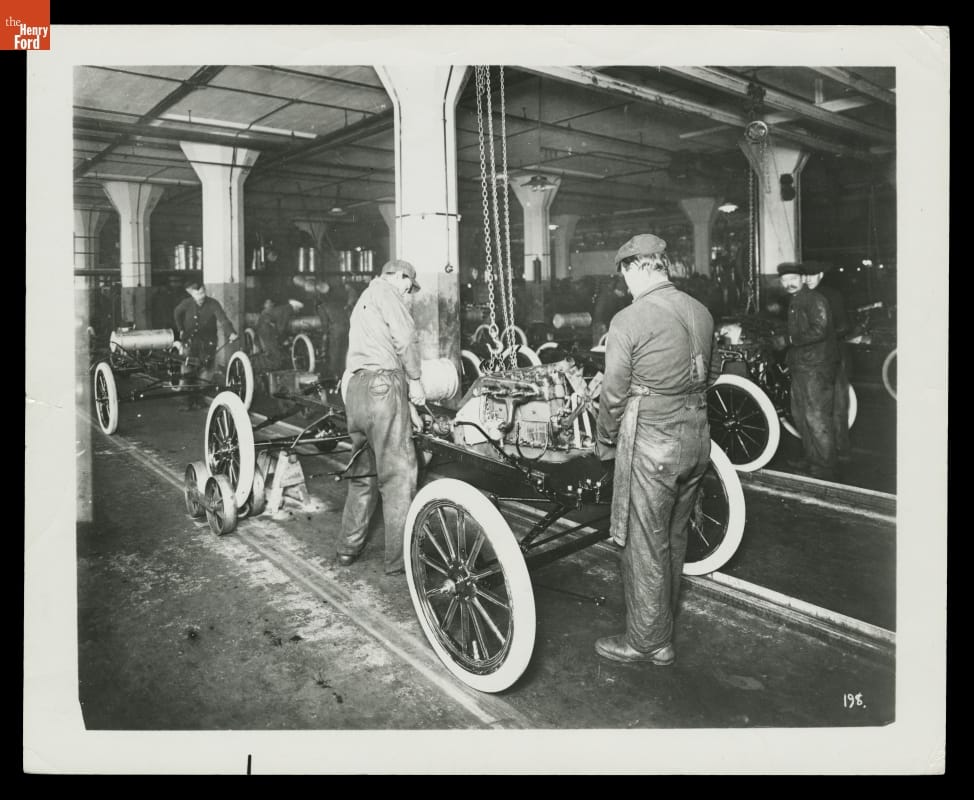 Workers lower an engine into a Model T chassis, 1913. Note that the line is not yet chain-driven. Ford constantly improved the assembly line in search of time and cost savings. / THF91696

The incredible time and cost savings realized through the assembly line allowed Henry Ford to lower the Model T’s price, which increased demand for the car, which then prompted Ford to seek even greater manufacturing efficiencies. This feedback loop ultimately produced some 15 million Model Ts selling for as little as $260 each.

The peak annual Model T production of 1.8 million in 1923 was still years away when Arnold and Faurote made their study. They did not capture Ford’s assembly line in a fully realized form. In fact, the line never was finished. It existed in a state of flux, under constant review for any potential improvements. Adjusting the height of a work platform might save a few seconds here, while moving a drill press might shave some more seconds there. Several such small changes could yield large productivity gains.

Ford Methods and the Ford Shops captures a manufacturer that has just discovered the formula for previously unimagined production levels. The assembly line is groundbreaking, and Ford knows it. The company’s openness with its methods, and Arnold’s and Faurote’s efforts to document and publicize them, helped make the Model T assembly line the industrial milestone that we still celebrate more than a century later.


Matt Anderson is Curator of Transportation at The Henry Ford. This post was adapted from a 2013 post in our Pic of the Month series.