Melville and Anna Bissell: “Sweeping” Their Way to Success

Melville and Anna Bissell, husband and wife entrepreneurs, solved their own “sweeping” issues--then “swept” the market with their mechanical carpet sweeper.

Needed: A Better Way to Clean
Housework has always been physically demanding and time-consuming--including keeping floors free of dust and dirt. For centuries, people used brooms to tidy their homes. It wasn’t until the 19th century that the first mechanical breakthrough in sweeping would appear. 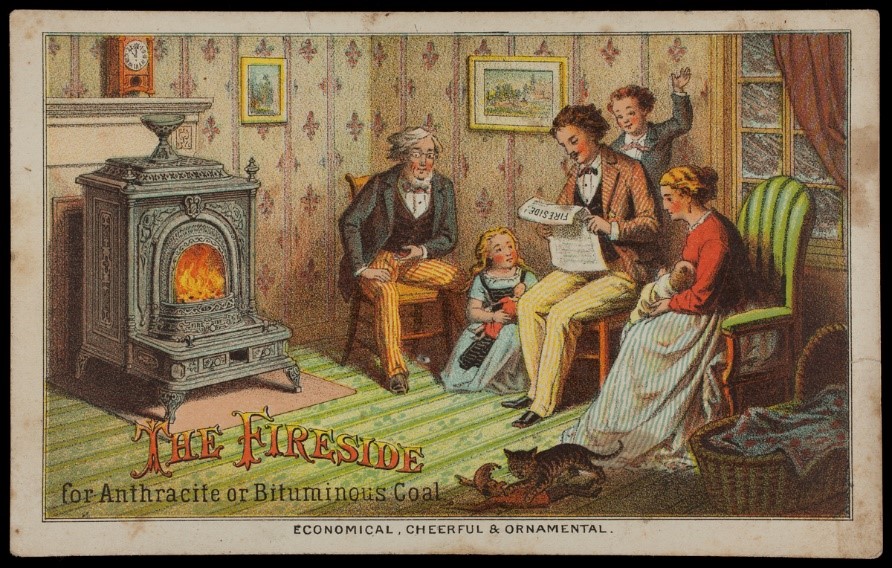 This trade card illustrates a more elaborately furnished--and more challenging to clean--home of the late 19th century. While brooms worked well enough on bare floors, they were much less effective at removing tracked-in dirt or coal dust from heating stoves that settled in carpets. THF208366

As house size grew and furnishings increased, people needed more effective methods of cleaning. Carpeting became very popular in middle- and upper middle-class homes during the last half of the 19th century--and it was more challenging to clean than bare floors. Going after dust and dirt with a broom on a carpeted floor wasn't terribly effective--it tended to just spread dust around. “Deep cleaning” one’s carpets was an elaborate process. Carpets had to be taken up once or twice a year, carried outside, and beaten with a carpet beater. The carpet then had to be reinstalled in the room.

Mechanical carpet sweepers made their debut in America during the mid-19th century. Carpet sweepers had a rotary brush connected to a pair of driving wheels. As the sweeper was pushed, the brush revolved, sweeping up and depositing dirt into a container that could be emptied easily. The United States Patent Office granted the first flurry of carpet sweeper patents in the late 1850s--five in 1858 and nine in 1859. Other patents would follow in the coming decades. 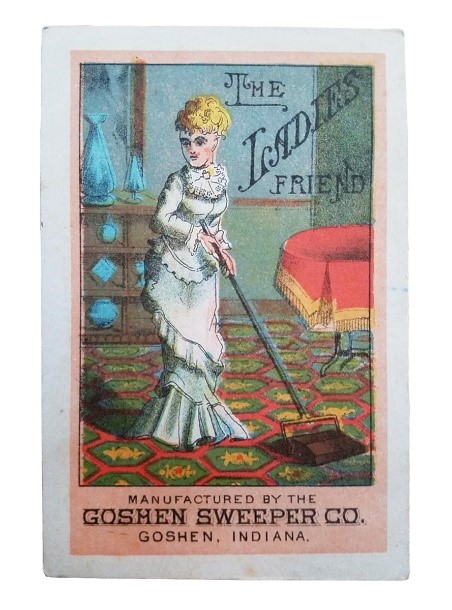 The fashionably dressed middle-class housewife in this circa 1880 Goshen Sweeper Company trade card “demonstrates” the company’s product. (She reminds me of June Cleaver from the 1950s television show, “Leave it to Beaver”-- who vacuumed while wearing high heels and pearls!) THF184126

Sweeping the Market
Grand Rapids businessman and inventor Melville Bissell would design his own carpet sweeper in 1876.

Melville Bissell was a serial entrepreneur. In 1862, at the age of 19, Melville opened a grocery store with his father Alpheus in Kalamazoo, Michigan. By 1870, the Bissell family had moved to Grand Rapids where father and son operated a successful crockery and glassware store. Melville Bissell had married 19-year-old Anna Sutherland in 1865. Anna would prove to be an astute business partner.

The Bissells’ crockery and glassware stock arrived at their Grand Rapids store packed in sawdust or straw. Unpacking this merchandise before placing it on store shelves created a hard-to-clean-up mess-- sawdust and straw escaped the wooden crates and collected in carpet fibers. While the Bissells owned a mechanical carpet sweeper, they found it just wasn’t up to the task. Melville solved the annoying problem by developing a much better mechanical carpet sweeper and patenting it in 1876. 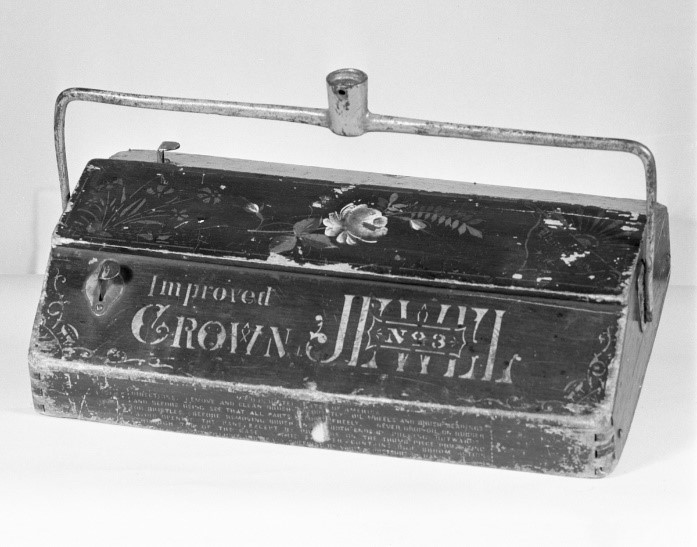 Anna Bissell quickly recognized this improved sweeper’s marketability--American housewives could keep their homes clean even more effectively, reducing the drudgery of housekeeping!  She became the driving force of sales and marketing. The Bissells decided to distribute their product through houseware retailers, rather than door-to-door salesmen. Anna made many sales calls to stores in the Grand Rapids vicinity, succeeding in getting shopkeepers to purchase and display their carpet sweeper.  Soon, hired workmen were turning out 30 sweepers a day on the second floor of the Bissell’s crockery shop to meet demand.

The left side of this circa 1880 Bissell trade card shows a vexed couple using a broom to clean their carpets. The right side depicts the couple--much happier now--using a Bissell carpet sweeper. (When holding the two-sided card up to the light, the entire message and images appear.) THF184124; T184125 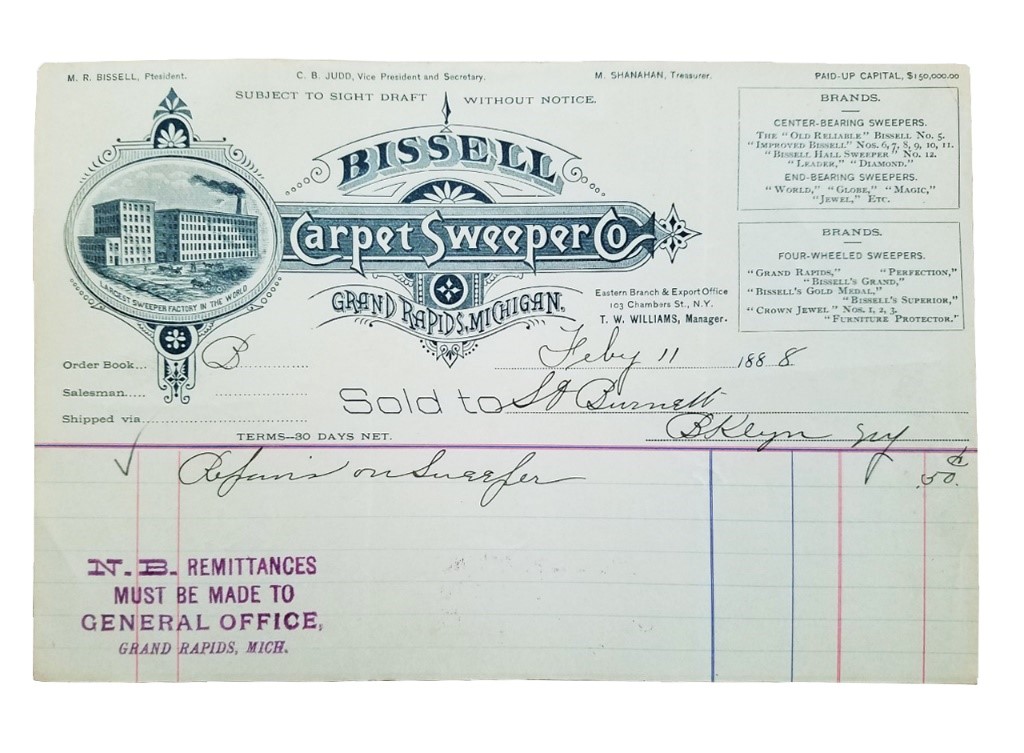 An image of the Bissell company factory and a list of Bissell carpet sweeper products appear on this 1888 invoice. THF184432

In 1883, Melville Bissell organized a stock company with a paid-up capital of $150,000 and built a five-story factory for manufacturing their carpet sweepers. When the factory burned the following year, the Bissells mortgaged the family home and other property to finance its reconstruction. Soon, the Bissell Carpet Sweeper Company was on its way to dominating the field as carpet sweepers grew increasingly popular in the 1880s.

It was essential to not only have a good product--but be adept at marketing it effectively to potential customers. This Bissell trade card lists the many advantages of Bissell carpet sweeper--making it unquestionably better than sweeping with a broom! THF213981 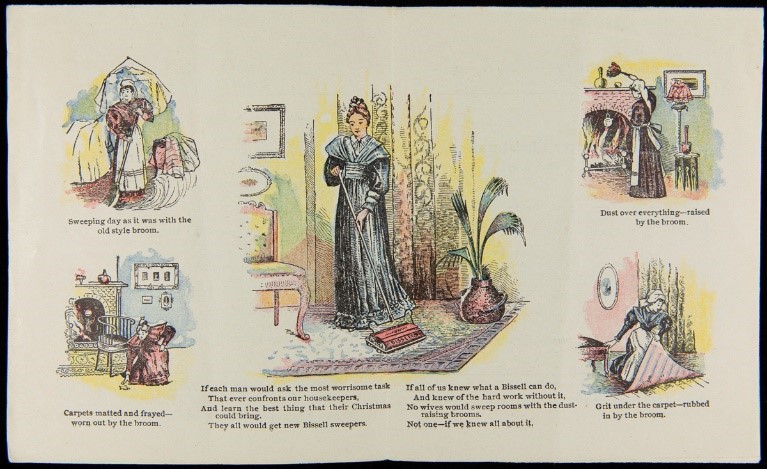 This "Christmas Bissellisms" advertising brochure suggests that a Bissell carpet sweeper would be a welcome Christmas gift for any woman. THF277410

Tragedy struck when Melville died of pneumonia in 1889 at the age of 45. Anna--now a widow with four children age 21, 7, 4 and 1--stepped in to lead the company. From the company’s beginning, Anna had been intimately involved in business affairs. Anna Bissell served as president of the Bissell company from 1889-1919--the first female CEO in the United States--and then as chair of the board from 1919-1934. She successfully managed the business, defending the company’s patents and marketing the sweepers throughout North America and Europe. 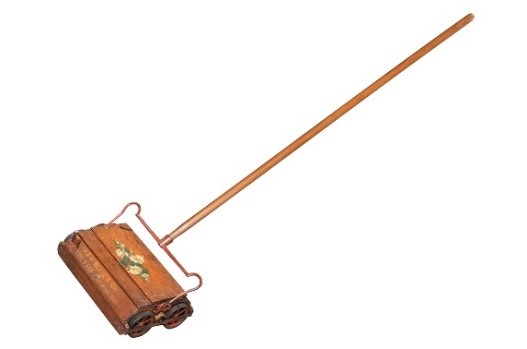 This circa 1891 Bissell carpet sweeper was sold by J.C. Black & Son at their store, The Fair, in San Jose, California. THF17277

By the 1890s, the company had an international presence and was producing 1000 sweepers per day. In addition to the company’s branch office in New York, the Bissell company established factories in London, Paris, and Toronto, with agencies in 22 foreign countries. A progressive employer, Anna Bissell was among the first business leaders of the time to provide her employees with pension plans and workers compensation.

Melville and Anna Bissell took a risk and thought big. They might have chosen to remain focused on their crockery business. But their collective vision for success went beyond. Bissell carpet sweepers would dominate the mechanical sweeper market, as people “bisselled” their way to cleaner carpets and rugs.