Capturing a Moment: How We Created a Display for Henry Ford’s “Sweepstakes” 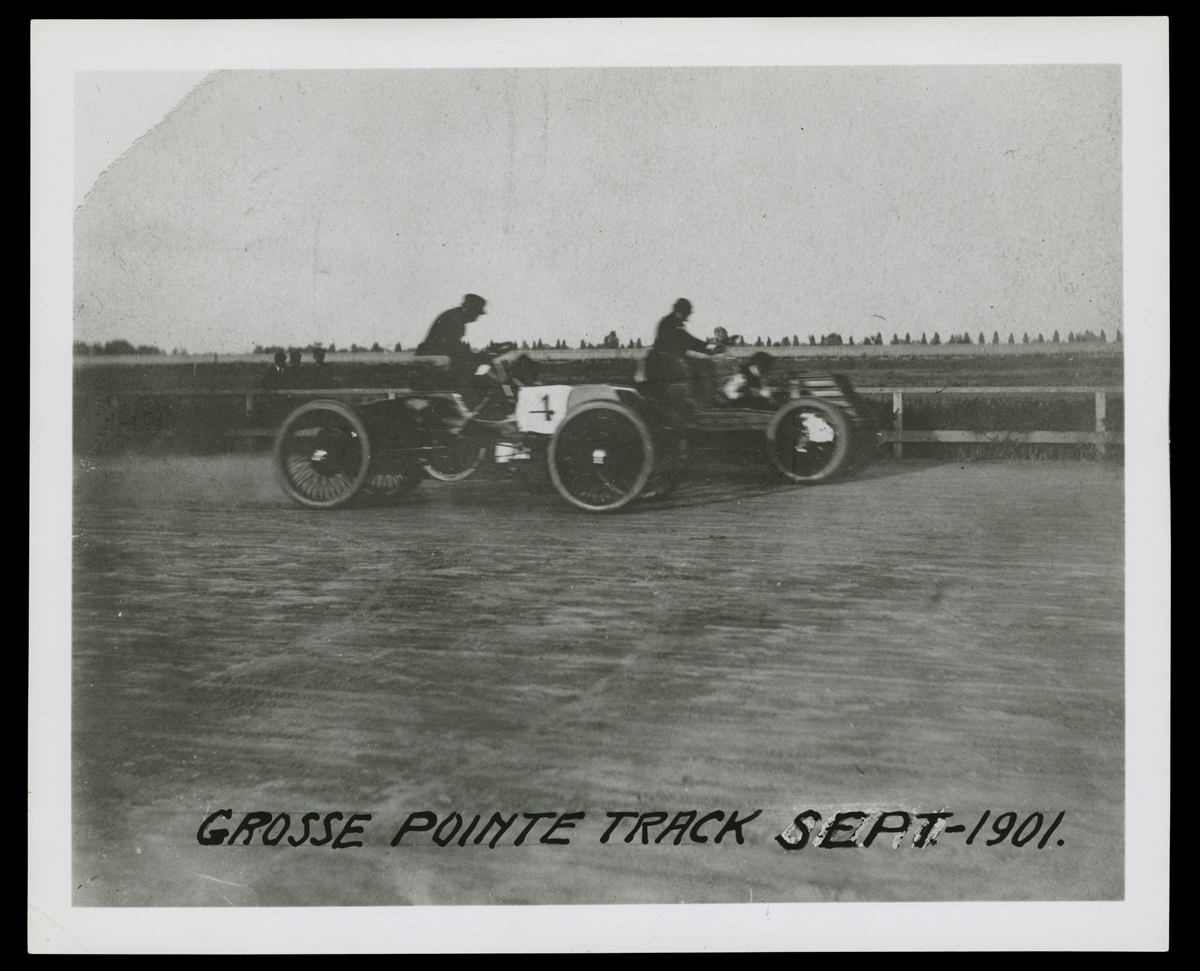 In his first race ever, Henry Ford beat Alexander Winton in the Sweepstakes Race. / THF94819

On October 10, 1901, Henry Ford made history by overcoming the favored Alexander Winton in his first-ever automobile race. Backed by a willingness to take risks and an innovative engine design, Henry  earned the reputation and financial backing through this one event to start Henry Ford Company, his second car-making venture.

His success that day is a natural introduction display for our newest permanent exhibition, Driven to Win: Racing in America, presented by General Motors. Driven to Win celebrates over 100 years of automotive racing achievements and the people behind the passion for going fast. 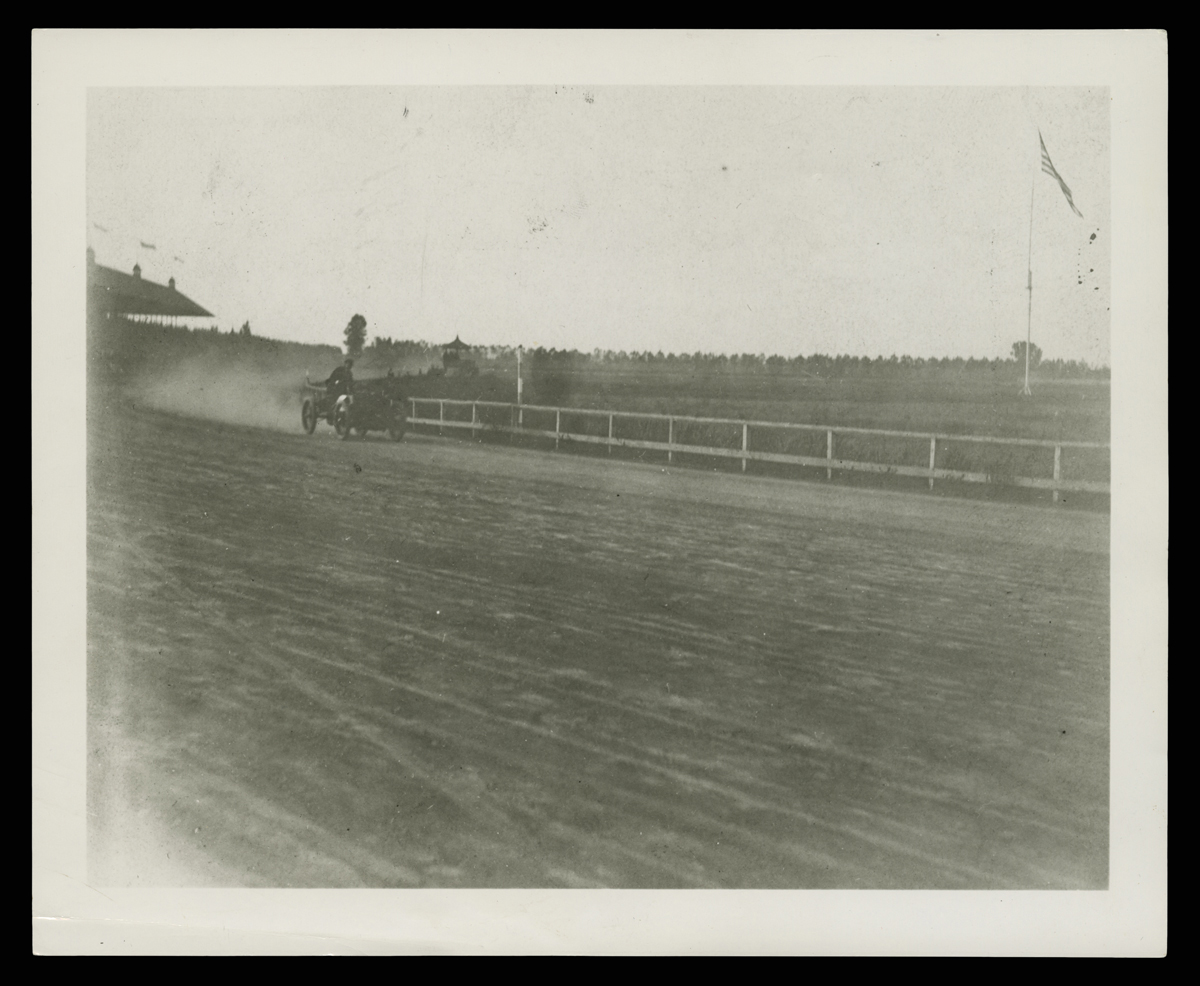 Photos of the 1901 race provide a view of the environment that written accounts don’t. / THF123903

In creating an exhibition, we start with many experience goals. In this case, one exhibition goal is to take our guests behind-the-scenes and trackside. As you experience Driven to Win, you’ll find many of the vehicles displayed on scenic surfaces and in front of murals that represent the places the cars raced. Henry Ford’s Sweepstakes Race took place on a horse racing track in Grosse Pointe, Michigan. Through reference photos and discussions with our exhibit fabrication partner, kubik maltbie, artisans created a surface that captures the loose dirt quality of a horse racing track. If you look closely, you’ll see hoof prints alongside tire tracks, which capture the unique location of this race. 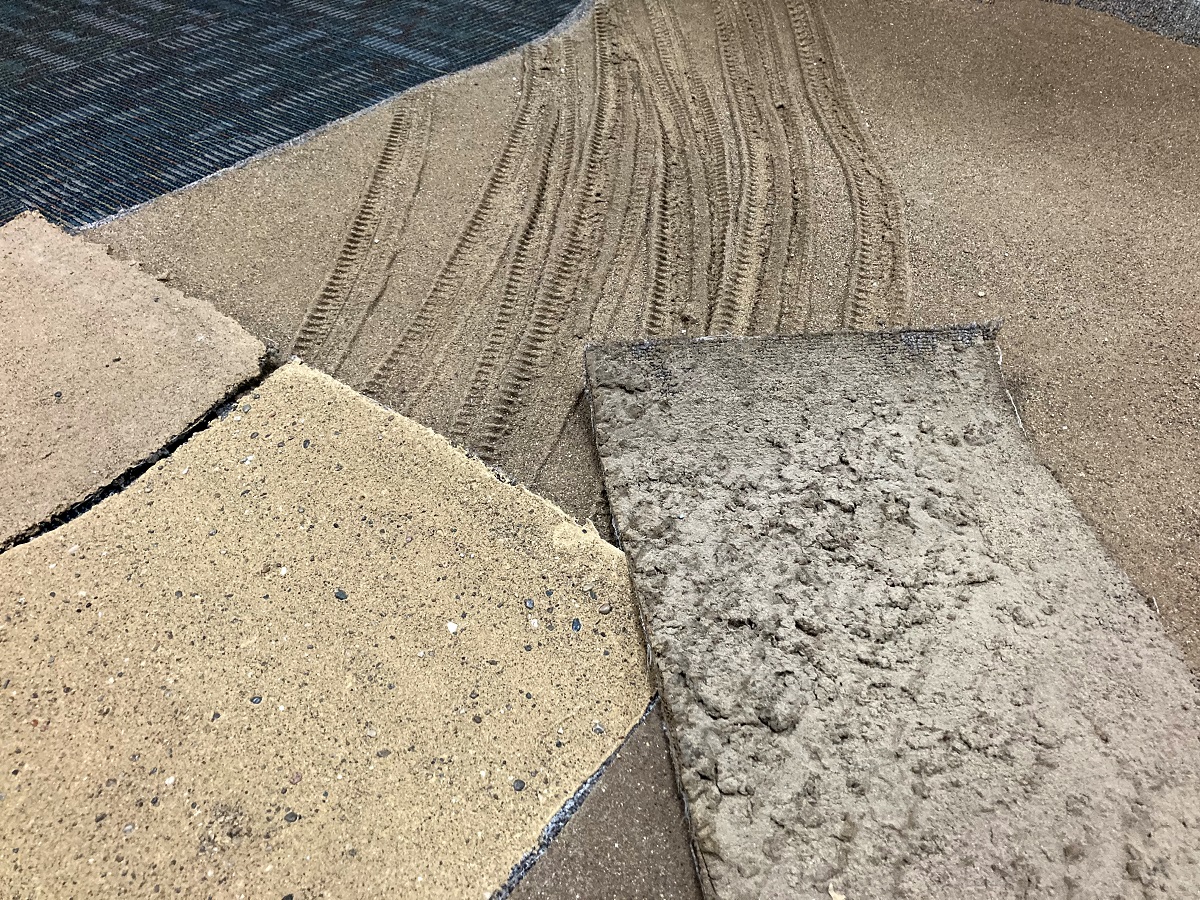 kubik maltbie’s artists created a variety of samples to find the most accurate dirt display surface that’s also suitable for use in a museum setting. 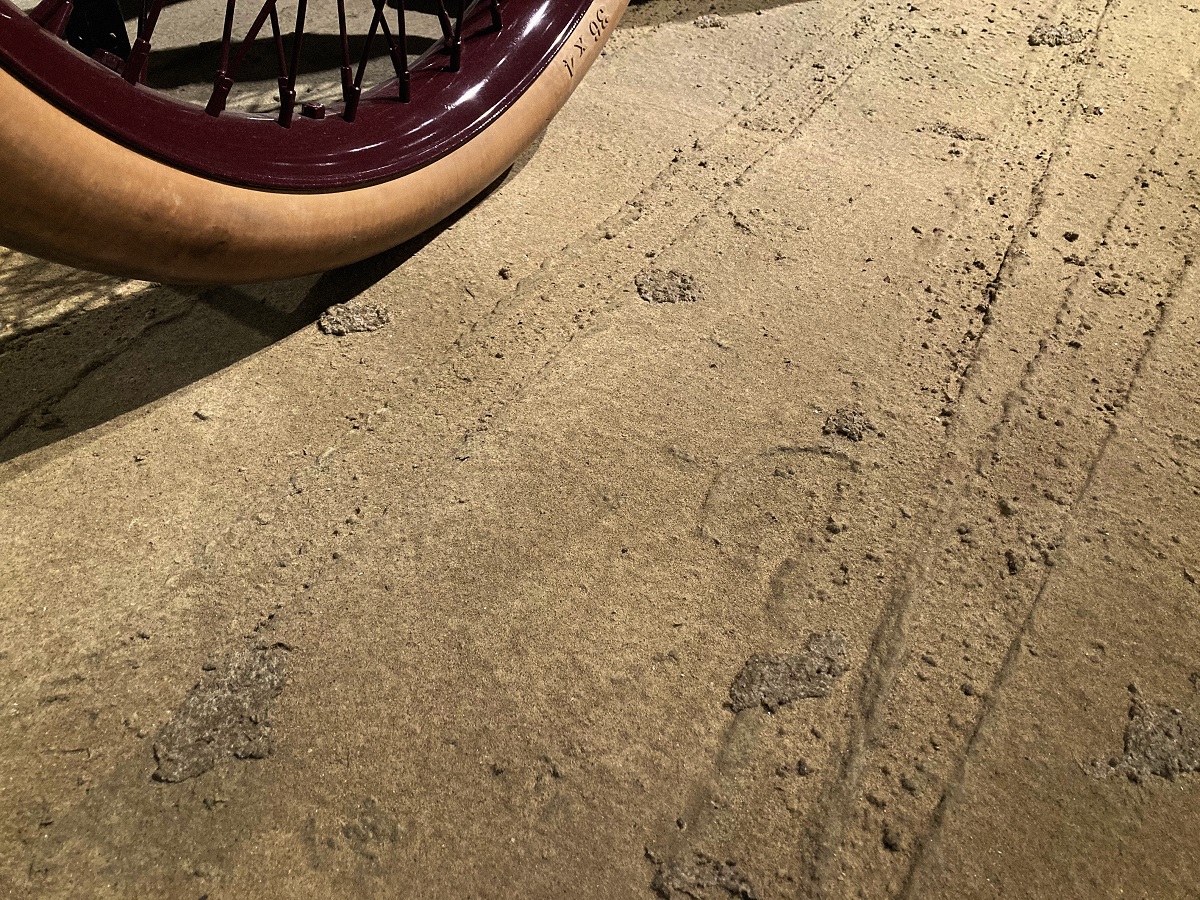 Look closely and you can see evidence of horses having raced on the same track.

The next component in bringing this race to life needed to illustrate what the day was like. It also needed to convey the most exciting part—when Henry Ford overtook his competition. Working with a local artist, Glenn Barr, we created a background mural depicting Henry’s rival being left in the dust. To do this, we returned to available reference photos showing the track, grandstand, and Henry’s rival, Alexander Winton, who was the country’s most well-known racer at this time. 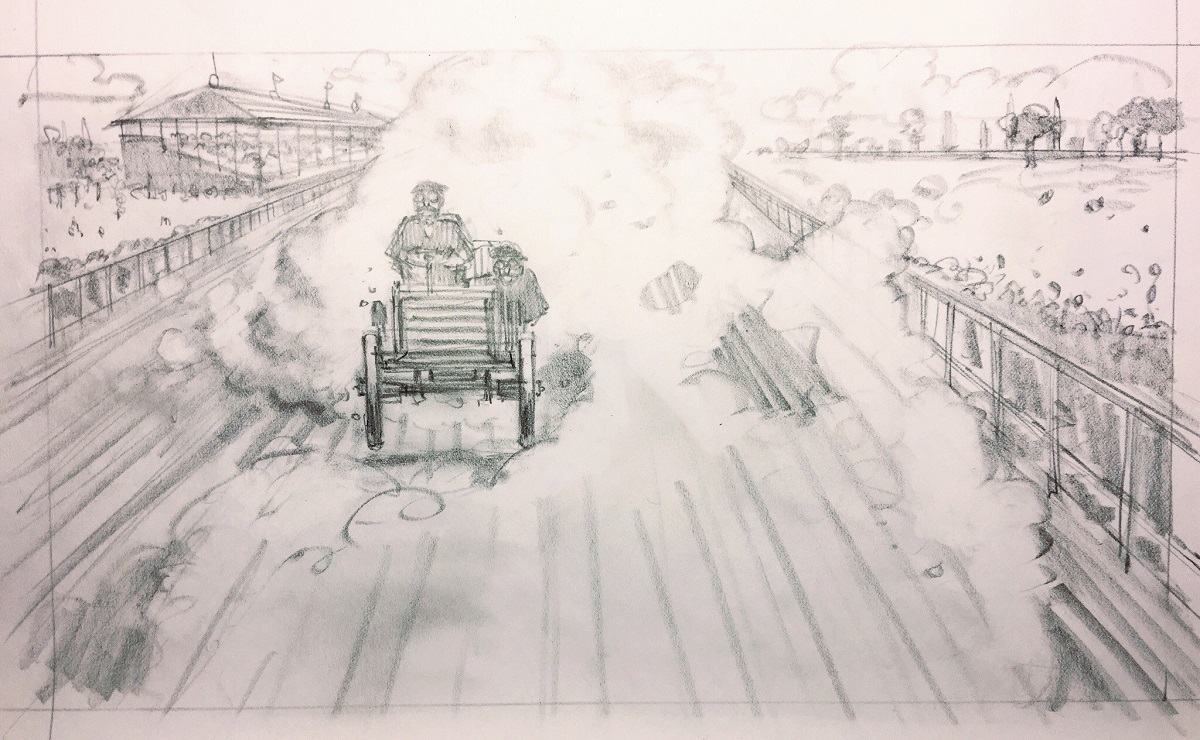 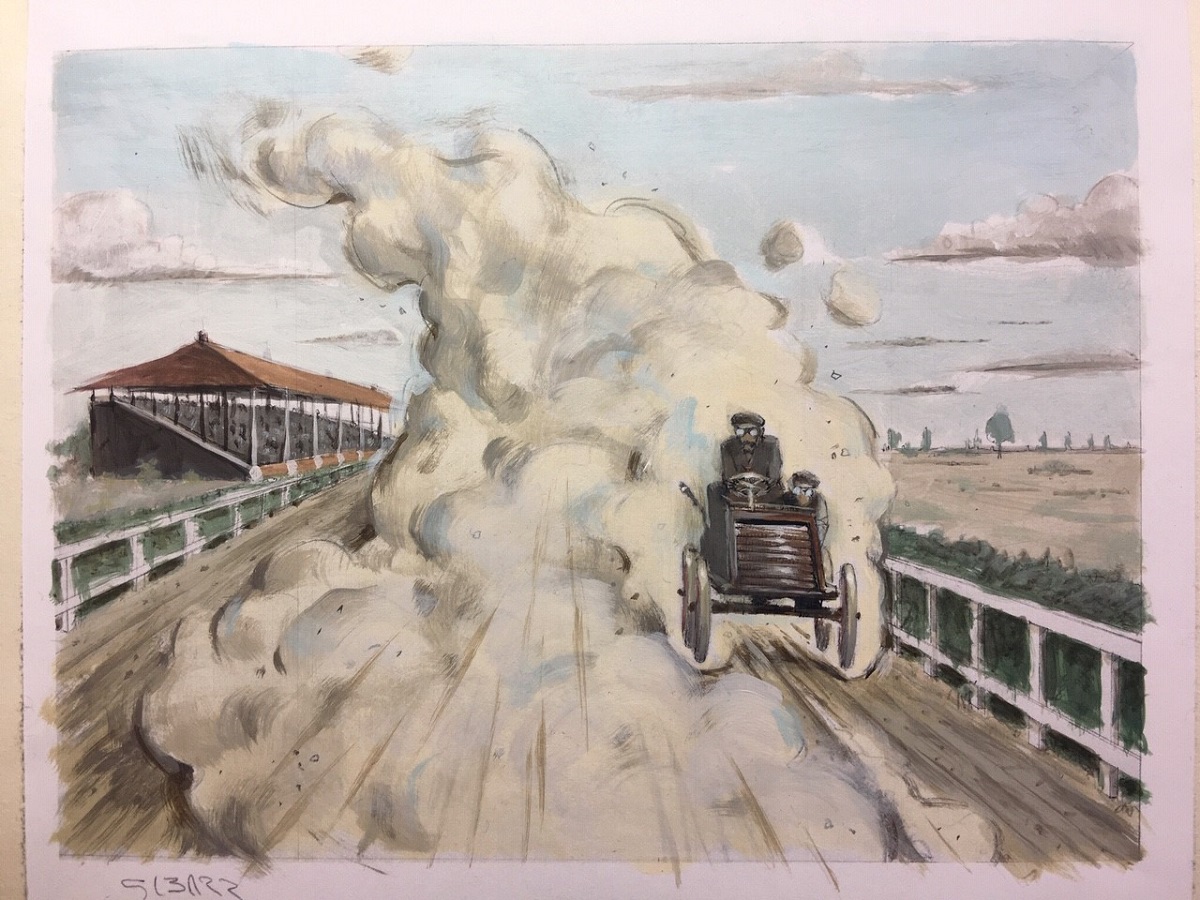 Sketches and small-scale paintings allowed Glenn Barr and the design team to discuss components of the mural before the final painting was created.

Glenn created a series of early sketches to make sure we had all the important elements. We then took those sketches and added them to our 3D model of the exhibition. This allowed us to pre-visualize the entire display from all angles, and verify we had the correct perspective in the mural. Color plays a big part in creating this scene with a certain mood. The goal was a color palette that felt like 100+ years ago, but also like we were watching the race. Glenn created a series of color samples that allowed us to find the right combinations. 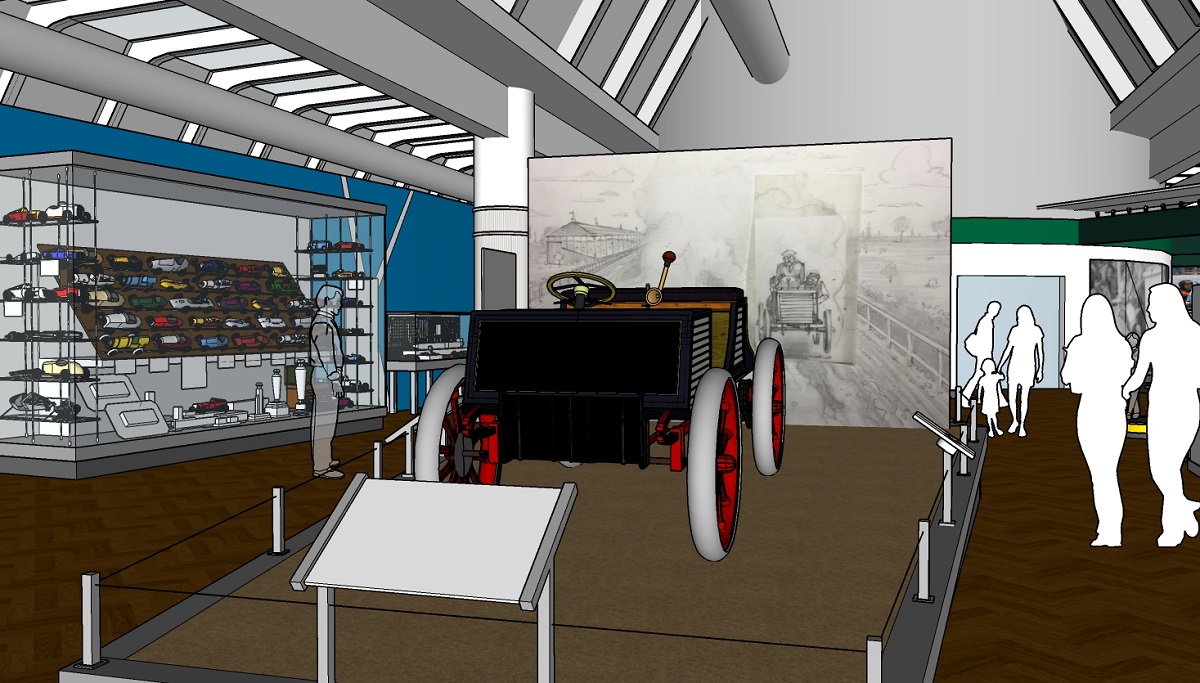 Programs like Sketchup allow us to easily create exhibit spaces in three-dimensions so that we can study sightlines and relationships between exhibit elements. 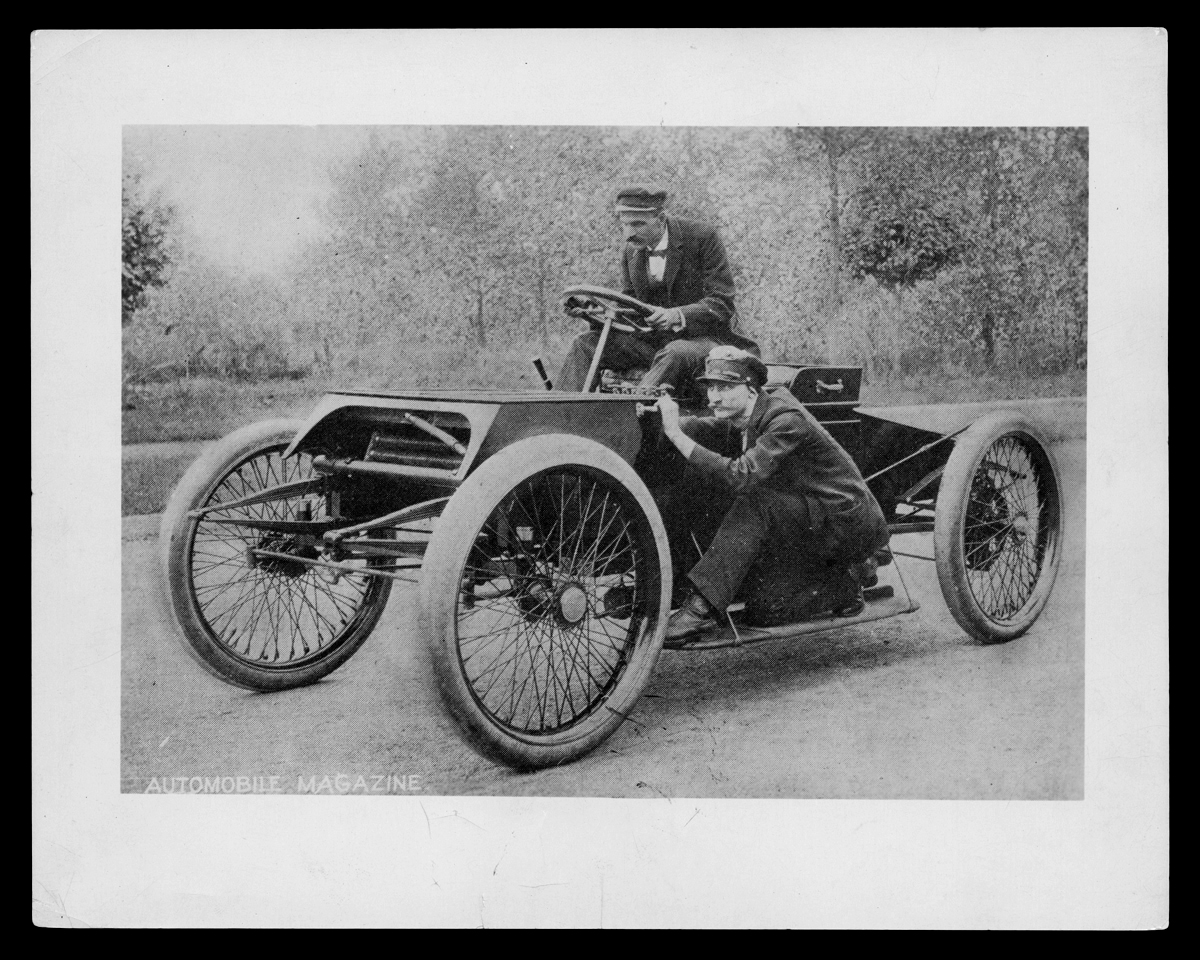 While this photo was posed, likely to commemorate the race win, Henry Ford and Ed “Spider” Huff’s postures are confirmed from other photos, and this one provides clearer details. / THF116246

The last element in creating our day-of-the-race display was perhaps the most important—Henry Ford and his ride-along mechanic, Ed “Spider” Huff, themselves. Again, reference photos are vital tools in seeing the past. In creating these mannequins we had three key elements to address: Henry and Spider’s likenesses, the clothing they wore, and the postures they’d have sitting in the vehicle. kubik maltbie’s artists were able to capture this moment. They started with clay sculptures of Henry and Spider’s faces. 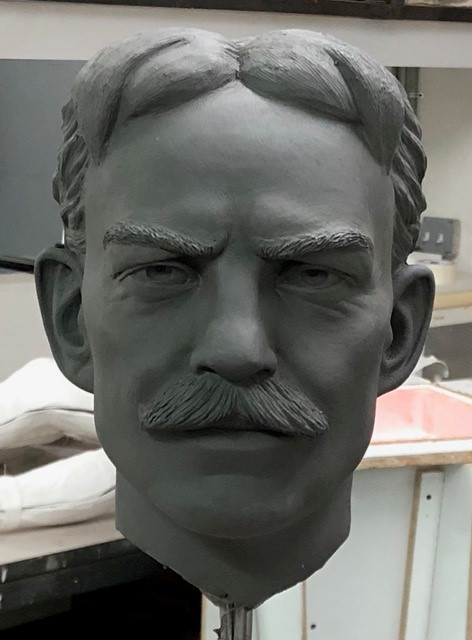 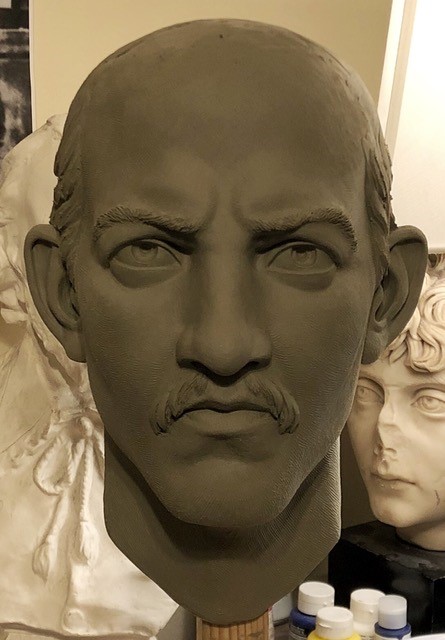 Henry Ford and Ed “Spider” Huff’s likenesses were captured in life-sized clay sculptures that would later be used to create molds for the finished mannequins.

As these mannequins needed to sit directly in the vehicle, a museum artifact, much of the final sizing, positioning, and decisions on how they interfaced with the car was done away from the actual vehicle. kubik maltbie’s sculptor came to the museum for several days and built a wood frame system around the Sweepstakes. This accurately captured important dimensions and connection points. An exact replica of the steering wheel became a template that sculptors could use in their studio to finalize hand positioning.

If you’ve visited Greenfield Village at The Henry Ford, you’ll have seen that period clothing is one of our specialties. Every spring we distribute over 1,000 sets of handmade attire authentic to many different time periods. With insight from our curators, our Clothing Studio provided period-accurate clothing, from shoes to hats, for Henry and Spider. 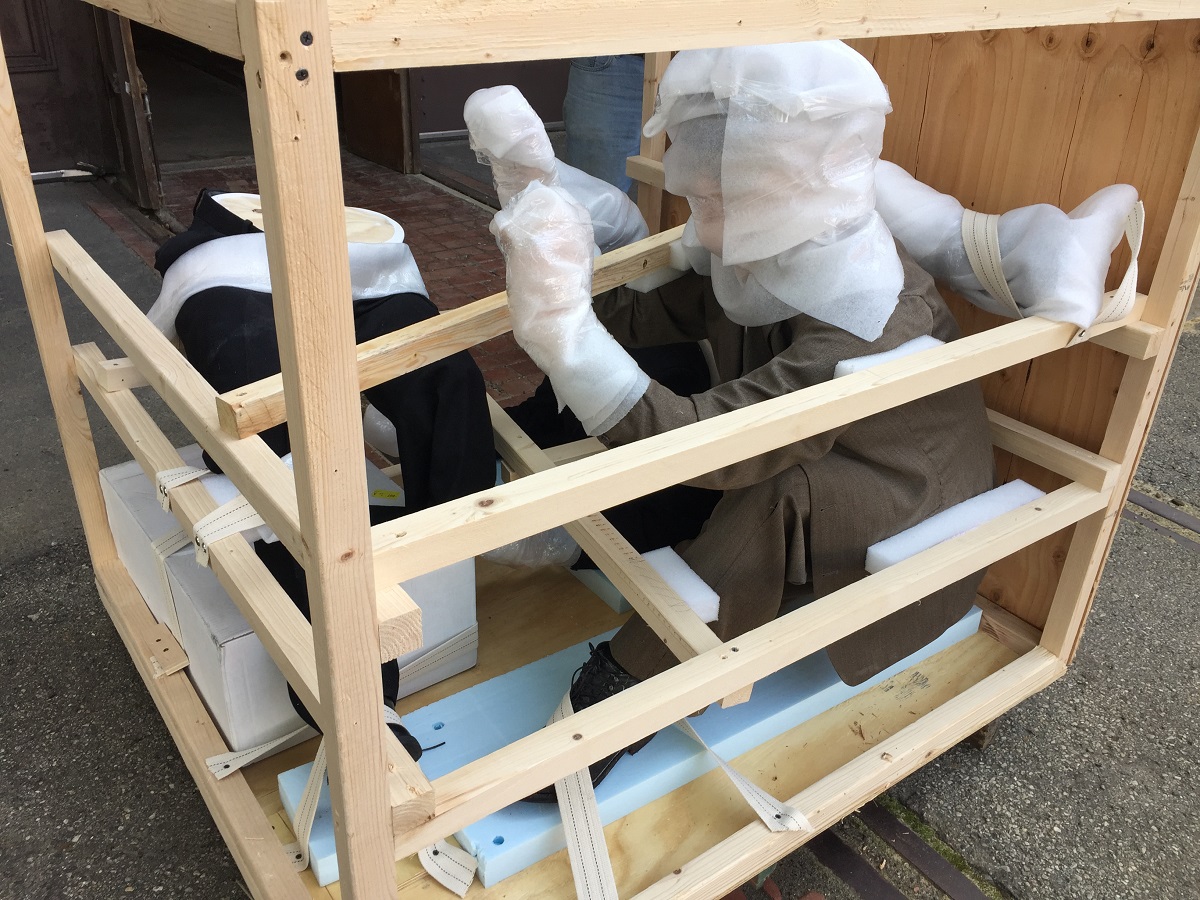 Henry Ford and Ed “Spider” Huff arrive at the museum. 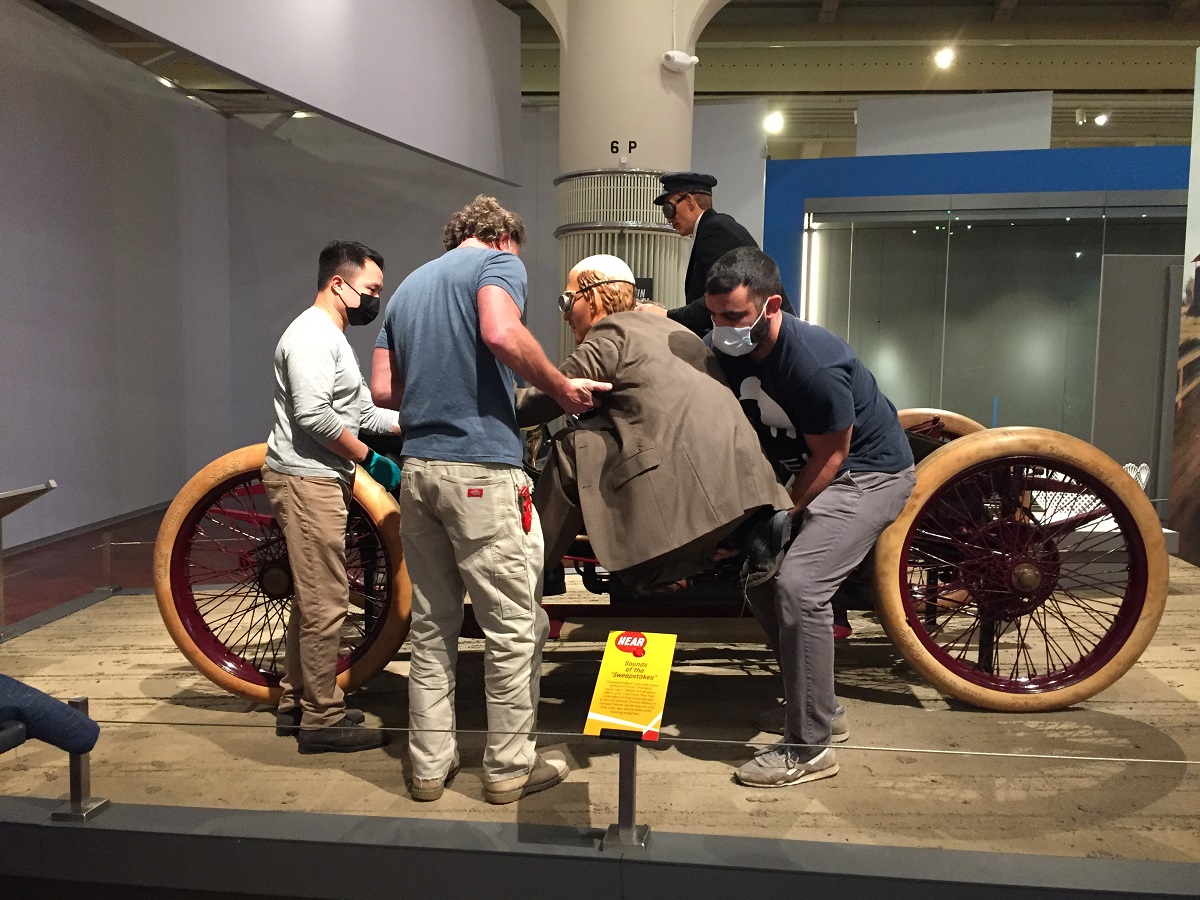 Together, all these elements allow us to take you on a trip back in time. I invite you to visit the museum and see this monumental moment in racing history, stand trackside, and imagine what it must have been like. You can even hear our faithful replica of the “Sweepstakes” running. It sounds nothing like today’s track-ready racing machines.