Behind the Scenes at

Heroes of the Sky

Heroes of the Sky is a tribute not just to aviation, but to the pioneers’ lofty achievements that helped define modern air travel. Join us on a journey through aviation’s first decades, and explore the stories behind the technologies that make flight possible.

The Beginning of an Historic Journey

In 2002, The Henry Ford received funding from Northwest Airlines, the U.S. Department of Transportation, and the National Endowment for the Humanities to create an exhibit that would tell the gripping history of flight. We had 15 planes to display; however, we did not merely want to present the planes in a linear narrative; rather, we wanted to tell how aviation came to the pivotal role it plays today.

“For years we followed the traditional practice among aviation museums of ‘park plane, place plaque,’” said Bob Casey, former Curator of Transportation. “This time we decided to make the connections between the larger story of aviation within our culture and the specifics of people’s individual stories.”

In evaluating the museum’s aircraft collection, the project team chose to highlight themes and personal stories. These are divided into five categories: inventors, barnstormers, record-breakers, explorers, and entrepreneurs.

“We want the widest possible audience to be engaged, not just flight enthusiasts,” says Donna R. Braden, Curator of Public Life and Exhibit Project Director. “So in every topic there are multiple ways to become engaged emotionally—it’s not an exhibit in which one size fits all.”

The Center of Sky Travel 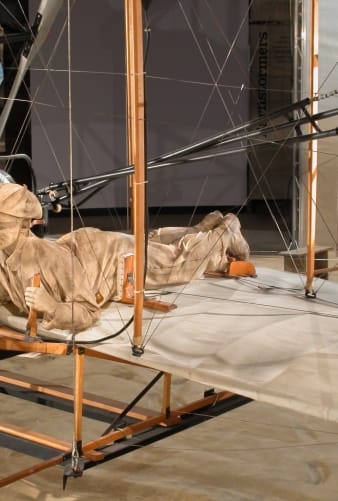 This copy of the 1903 Wright Flyer faithfully replicates the original aircraft. On December 17, 2003, the replica attempted to duplicate the Wright brothers' first flight at Kill Devil Hills, North Carolina, exactly one hundred years after that historic feat. The attempt was foiled by bad weather, though the replica flew successfully in earlier tests.

From the Collections of The Henry Ford. Gift of Ford Motor Company.

at Henry Ford Museum in Heroes of the Sky

The centerpiece of the exhibit is a replica of the 1903 Wright Flyer, built by Ken Hyde of the Wright Experience in Virginia. The rest of the planes revolve around the Flyer, demonstrating that no advancements in aviation would be possible without the Wright brothers’ original invention. However, while the brothers were brilliant engineers, they were not good businessmen. They failed to discover a practical use for their airplane, raising a question that the exhibit aims to answer: How did a 12-second flight create a world fueled by air travel?

The first section of the exhibit demonstrates the early power of the airplane. While still an infant industry, aviation caught the eyes and hearts of spectators, awestruck at the notion of human flight. The 1909 Bleriot XI, designed just six years after the Wright Flyer, was the first aircraft to cross the English Channel. Not only was this an accomplishment in the pioneer era of aviation, but it assured the future of aircraft manufacturing. This event created waves of appreciation for the new industry—the English newspaper The Daily Express led its account of the flight with the headline “Britain is no longer an island.”

The 1939 Sikorsky VS300A, showcased next to the Bleriot, was the first practical helicopter. It flew backward, sideways, up and down—even spun around—but it could not originally fly forwards. By 1941, Sikorsky had fixed the problem. This invention represented another shift in the aviation world. Now pilots had the dexterity and maneuverability of a helicopter to further explore the possibilities of flight.

With its polished navy blue body and rugged wooden wings, the 1926 Fokker Trimotor screamed adventure. In the same year, navigator Richard Byrd and pilot Floyd Bennett strapped themselves into the Fokker and became the first duo to fly to the North Pole. Byrd’s plane, nicknamed the “Josephine Ford,” for sponsor Edsel’s daughter, had the name “FOKKER” painted in huge letters on its wings and fuselage so it would not be mistaken for a Ford.

This age of airplanes made famous for their adventurous pilots ushered in a new era of exploration. Pilots such as Charles Lindbergh and Amelia Earhart became famous for demonstrating the use of an airplane as a tool of exploration: for seeing the world from new heights and stealing the collective imagination of the people.

Every new invention is followed by those who try to monetize it. Aviation created prosperous opportunities for those who dared to take a risk in the infant industry. “These inventions came in fits and starts,” says Casey. “There were dead ends; some things worked and some things didn’t. But like all inventions, uses for aircraft had to be developed. Then there was the question of profit.” To make airplanes commonplace, a profit stream had to be discovered.

Following the Model T’s success as a car that anyone could own, Ford sought to manufacture an airplane for the masses, the 1926 Ford Flivver. The single-seat aircraft was designed with Henry Ford’s instructions that it should “fit in his office.”

The airplane’s test pilot was Harry J. Brooks, a young employee and favorite of Ford. Charles Lindbergh was invited to fly the Flivver, and later described it as one of the worst aircraft he ever flew. When Brooks died in a Flivver crash, Ford stopped production and left the aviation industry.

However, other entrepreneurs had more success than Ford. The 1939 Douglas DC-3, a massive aluminum passenger plane painted with Northwest Airlines decals, stands over the exhibit floor as a tribute to the plane’s great success.

With room for 21 people, the DC-3 was the first airplane large enough to make a profit carrying passengers alone, without the need for supplemental mail contracts. The museum’s DC-3 flew more than 12 million miles in over 83,000 hours. More than 16,000 variants of the DC-3s were produced for civilian and military use, making it one of the most popular planes of all time. The DC-3 opened the door to the profit-making side of aviation, introducing mass air transit for travelers and soldiers alike,

The barnstormers were certainly the most daring class of pilots. These daredevils performed aerial stunts atop the plane’s wings, dancing and flipping in mid-air. They seized the public’s attention and spread excitement about early planes. Fairgoers would line up to watch the iconic barnstormers perform breathtakingly dangerous stunts, issuing much-deserved applause from the audience.

While they were fighting for equal treatment on the ground, women in the early 20th century proved themselves in the sky. Lillian Boyer was looking for a way to quit her job as a waitress and feel the excitement of the open air. In 1921, two customers offered to take her on an airplane ride and she accepted. Four days later, on her second flight, she tried climbing out on the wing: her career as an aerial exhibitionist had begun. Crowds were stunned by her bravery. As one local newspaper put it, she produced “more thrills than any other aerial artist.” Her career lasted until 1929, when federal regulations on unsafe planes forced her and other barnstormers into retirement.

While this age of aerial acrobatics was short-lived due to safety concerns, it certainly caught the attention of the public and spurred a wave of excitement around flying.

If aviators could no longer dance on the wings, they decided to get their thrills another way—by breaking records. The record breakers demonstrated the power, speed, and endurance of the airplane. Furthermore, they ushered in an era of specialty planes, those built for the sole purpose of making history.

The 1920 Dayton Wright RB-1 was one of the first planes engineered specifically for speed. While it raced only once and didn’t even finish, it had a top speed of 165 mph and demonstrated the potential of aviation.

The 1927 Ryan Spirit of St. Louis replica was designed to represent the plane that Charles Lindbergh flew across the Atlantic Ocean in the first-ever solo trans-Atlantic flight. In 33 hours and 30 minutes, Lindbergh completed the non-stop journey from New York to Paris. He was greeted by 100,000 screaming fans, dazzled by the accomplishments of the heroic plane and pilot.

In a little over a century, inventors have turned the unfathomable into reality. However, the future of aviation was not always clear. It took the great leaps of early inventors, the wanderlust of bold explorers, the risky ventures of early entrepreneurs, the daring acrobatics of barnstormers, and the thrilling speed of record breakers to make air travel mainstream. One hundred years of risk, failure, hope and excitement; these flooded the heavens with airplanes soaring from the imagination: these men, women and great machines truly are the heroes of the sky.