Learn how the bus on which Rosa Parks sat that day in 1955 was restored—going from a discarded relic in an Alabama field to one of the most popular artifacts in Henry Ford Museum.

Museums often showcase artifacts that represent significant technological advances as symbols of our scientific progress. Cultural innovation, however, is more difficult to convey. In our quest to spotlight social change, curators at The Henry Ford search for objects that embody some of America’s most compelling cultural movements.

On December 1, 1955, African-American seamstress Rosa Parks was arrested for failing to give up her seat on a Montgomery city bus to a white man, breaking existing segregation laws. Many believe this act sparked the Civil Rights movement. When the opportunity arose, our staff recognized that the Rosa Parks bus would be an extraordinary addition to the museum—though it would be a long journey to acquire and restore it.

The bus identification number was not recorded in any official documents when Rosa Parks was arrested, so years later, many museums and organizations were searching for the bus, but no one was quite sure which bus it was. When bus #2857 was retired in the early 1970s, Roy H. Summerford of Montgomery bought it. At the time, company employees told him that it was the Rosa Parks bus. Summerford and his descendants kept the bus in a field and used it to store lumber and tools. When Summerford passed away, the bus became the property of his daughter and son-in-law, Vivian and Donnie Williams. Although the Williamses knew that this had been identified as the Rosa Parks bus, they had no documents to prove it.

Robert Lifson, President of Mastronet, an Internet auction house, decided he wanted to auction off the bus for Mr. and Mrs. Williams. He began a search for documents authenticating the bus—and he found one.

Montgomery bus station manager Charles H. Cummings had maintained a scrapbook of newspaper articles during the 1955–56 Montgomery bus boycott. Next to articles describing the arrest of Rosa Parks, he wrote "#2857" and "Blake/#2857." James Blake was the bus driver who had Rosa Parks arrested. The son and wife of Mr. Cummings, now deceased, confirm that he jotted down the bus number because he felt the events were so important.

Often, as in this case, historical truth is not officially recorded, but is passed along in private memoirs and oral tradition.

The bidding began at $50,000 on October 25, 2001, and went until 2:00 AM the next morning. We persevered, with our staff bidding $492,000 to outbid others who wanted the bus, including the Smithsonian Institution and the City of Denver. At the same time, our team also bought the scrapbook and a Montgomery City Bus Lines driver's uniform.

Next came the restoration. After sitting unprotected in a field for 30 years, it is not surprising that The Rosa Parks bus needed a substantial amount of work. Its seats and engine had been removed, many windows were broken, metal had rusted through and the lime, white and gold paint job was a mere shadow of its former self.

Our experienced conservation staff carefully examined the vehicle and consulted with various experts. Three interested companies bid on the extensive restoration work, and finally, MSX International, an automotive engineering and technical services firm headquartered in Southfield, Michigan, was selected to perform the work at a cost of over $300,000.

Museum and MSX employees researched every detail of the bus so that the restoration would be truly authentic. Original material was reused wherever possible and original parts from identical 1948 GM buses were used when necessary. Our goal was to restore the bus to its condition in 1955—a seven-year-old urban transit coach. 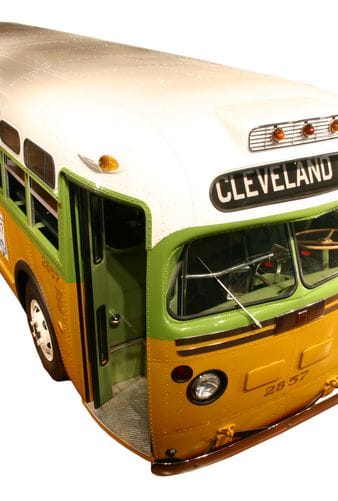 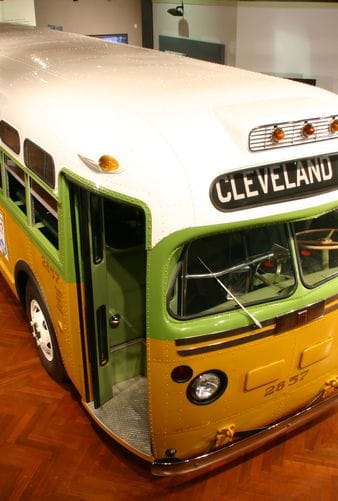 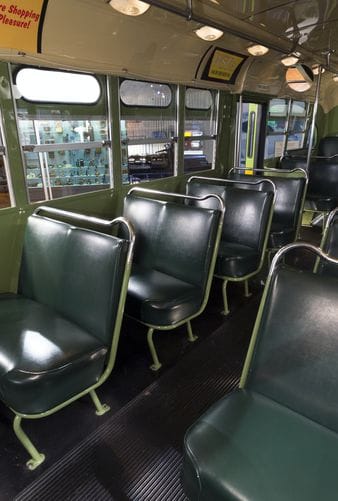 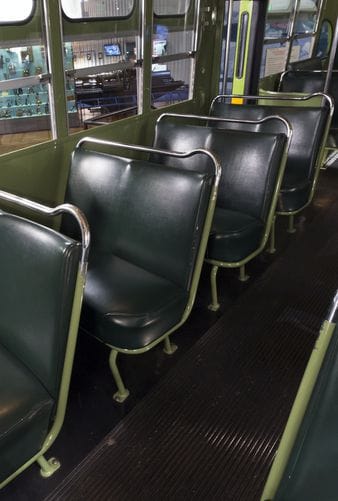 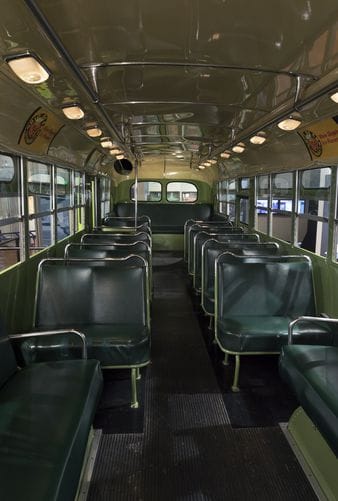 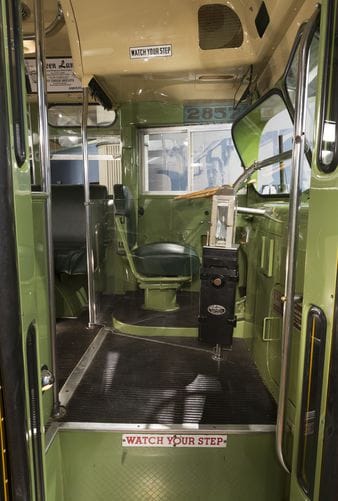 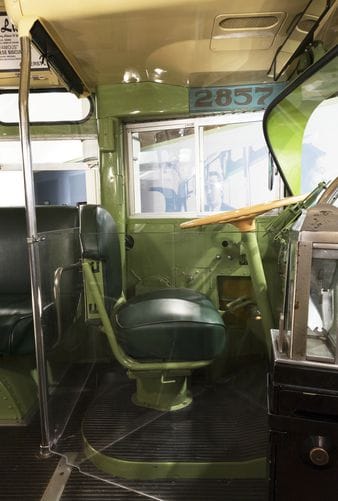 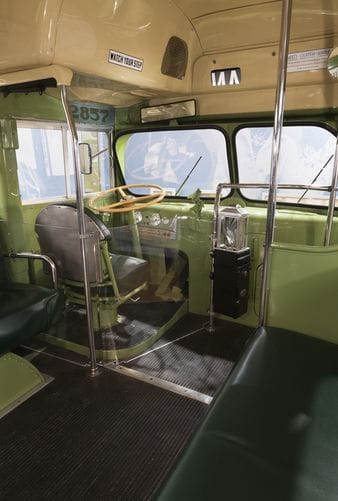 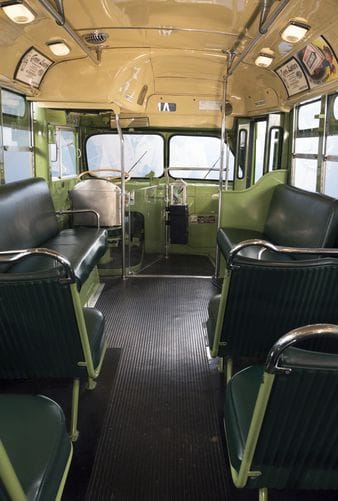 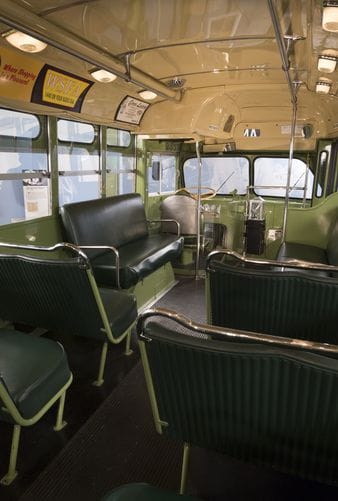 Inside this bus on December 1, 1955, Rosa Parks, a soft-spoken African-American seamstress, refused to give up her seat to a white man, breaking existing segregation laws. The flawless character and quiet strength she exhibited successfully ignited action in others. For this, many believe Rosa Parks' act was the event that sparked the Civil Rights movement.

at Henry Ford Museum in With Liberty & Justice for All

The restoration was shaping up to be both difficult and costly. Fortunately, the federal government stepped in to help cover the cost of the project.

In September 2002, the President’s Committee on the Arts and the Humanities excitedly announced, “The bus in which Rosa Parks helped inaugurate the civil rights movement will be restored in Dearborn, Mich., by Henry Ford Museum and Greenfield Village.” By then, The Rosa Parks bus project had received $205,000 in funding through the Save America's Treasures Program.

“These Save America’s Treasures grants help ensure that the nation’s priceless cultural heritage will be passed on to future generations of Americans for many years to come. From monuments to manuscripts, the rich and varied stories of American democracy are being preserved and told,” said Adair Margo, then-Chairman of the President’s Committee.

Selection criteria for the competitive grant program required that each project be of national significance, demonstrate an urgent preservation need, have an educational or other public benefit, and demonstrate the likely availability of non-federal matching funds. The Rosa Parks bus qualified in all respects.

The restored bus was first exhibited at The Henry Ford’s “Celebrate Black History” program that began on February 1, 2003, and was a focal point of celebrations of Rosa Parks’ life and legacy when she passed away in 2005, as well as on her 100th birthday in 2013. It now stands as the pinnacle artifact in our With Liberty and Justice for All exhibit.