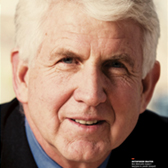 Bob Metcalfe He’s the inventor of Ethernet, a venture capitalist, pundit and publisher who says you’re supposed to stand on the shoulders of giants and, as for enemies, they’re a good thing.

Creator of Ethernet, venture capitalist and networking engineer Bob Metcalfe talks technological innovation and what it takes to stay on the cutting edge of invention.

Bob Metcalfe considers himself a lucky guy. His first stroke of luck, he says, was being born to Robert and Ruth Metcalfe, who told him to go to college and “do something you’re good at.” Second on his list, landing a job at the Xerox Palo Alto Research Center (PARC) in the early 1970s as the networking guy asked to figure out a way to connect computers sitting on desks (the first PCs).

He did just that and, unapologetically, accepts the title as inventor of Ethernet—the mysterious high-tech system of wires, cables and devices that makes it possible for computers and their users to talk to each other and work as teams.

When The Henry Ford sat down with the opinionated and outspoken Metcalfe as part of its OnInnovation series in 2008, he did not disappoint. Known for his candor and winner-take-all philosophy, Metcalfe does not hesitate to give credit where it’s due—to himself as well as to a select few others. He also jumps at the chance to slam monopolies (Microsoft’s Windows, for example, he likens to junk) and the status quo, which he calls nasty, conniving and the killer of innovation.

OI: Have you always felt you had an innovative nature?

Metcalfe: I loved going to school. My parents never went to college, and it was one of their goals for me. My dad was a technician, a union man, a gyroscopic test engineer for aerospace, and the basement was always full of gadgets. I think that's how I got into science and math. One day, he came home and found me unconscious on the basement floor because I had reached into a television (and there's a high-tension, high-voltage line in the back of those big ol' CRTs). Apparently, I grabbed it and fell unconscious. Maybe that was curiosity.

OI: Xerox PARC, your old stamping ground, is legendary for being a hotbed of innovation. What was it like?

Metcalfe: While I was finishing my Ph.D. at Harvard, I was offered a job at the Xerox Palo Alto Research Center, which was relatively new in 1972. I went. It was just beginning to be called Silicon Valley. And it was known for semiconductors and software. The Internet hadn't happened yet; the personal computer hadn't happened yet.

Some really smart people—George Pake, Bob Taylor, Jerry Elkind—started recruiting people from ARPA, MIT, Utah, Stanford and so on. We quickly believed that we were the best computer science laboratory in the world—naturally.

We pretty much invented the personal computer at Xerox, although people will argue forever about that.

Soon after I got to PARC, my colleagues had this idea for the personal computer, which was called the Alto. They said, "We're going to fill the building with personal computers, one on every desk, but we need a way to connect them together. Why don't you work on that?" From that came the Ethernet. That was my good luck. The breakthrough was not so much the invention; it was being there to get the job. It was the first time in the history of the world that there would be a computer on every desk. There wasn't a flash of genius. It was just sort of the next obvious thing to do.

OI: Downplaying a little aren't you?

Metcalfe: I generally try to convince people that inventing stuff is something that anyone can do. It's not something that special people who drop out of the sky magically do. It depends on what's around you. It's not a divine gift. It's a skill and something you can practice doing.

OI: Can you share the beginnings of inventing Ethernet?

Metcalfe: I had to think about how would you go about networking a computer? Not one per city, which is what ARPANET did, but one per desk. I combined the ideas from ARPANET and another network I encountered called the Aloha Network. Those two sets of ideas convolved to become the design of Ethernet. How these computers would all be connected to this passive ether, a piece of co-ax running down the middle of the hall, was the original concept. And then each PC on each desk would run a cable up and tap into this co-ax from which it could send and receive packets through the ether, and it would be part of the Ethernet.

I would like to be remembered as someone who is enthusiastic. To be enthusiastic about something is a source of happiness.

OI: Some say you stole the idea?

Metcalfe: There are those nasty people who think I stole the idea—that basically Ethernet is the Aloha Network. There is a germ of truth to that, but just a germ. Aloha was a radio network; the first Ethernet was a co-ax network. Aloha had two radio channels; co-ax Ethernet had just one. And 50 other little differences.

You're supposed to stand on the shoulders of giants, aren't you? Just as long as you acknowledge the giants, I think everything's OK.

Metcalfe: I think marketing is an important part of innovation. I figured Ethernet needed a birthday, so we could celebrate it and organize promotional energy around it. If you were to ask me when Ethernet was born, if it had a birthday, it would be this day. It was named, and its general principles laid out, in a memo I wrote dated May 22, 1973. Of course, if you're familiar with the innovation process, you realize that it wasn't really invented in one day, by one particular person. It's kind of a cloud of events.

OI: Whom do you like to give credit to for helping you invent Ethernet?

Metcalfe: A man named David Boggs noticed me fiddling with co-ax cable ineptly in the basement at PARC. He came over to help, and in that moment Boggs and I became a team. We built the first Ethernet together.

The story has repeatedly come up that Dave really invented the Ethernet and then I sorta stole it from him because he's the quiet, introverted, technical person and I am the more outgoing, articulate bullshit artist. Our personalities invite that interpretation, and everyone runs to Dave trying to get another side of this story. Dave always says, "No, we worked together on the building of it." That's in the record.

OI: Why do you think the competition didn't see the potential of interconnectivity of computers right away?

Metcalfe: Some of it is just personal animosity. Because when you have a bunch of high-ego individuals like moi, it's easy to get into petty personal disagreements. I have had more than my share of those. Part of it was also that Dave Boggs and I had some early trouble debugging the Ethernet, and people thought less of us for that. The real problem, however, was that the computer we were using wasn't finished yet.

OI: So Ethernet and personal computers sort of evolved together?

Metcalfe: Ethernet doesn't do anything if there were no PCs to connect together. And PCs are not as useful stand-alone as they are when there are networks. It's hard to sell Ethernet for PCs when there weren't any PCs. That's kind of a problem.

I estimate that it was around 1994 when connectivity became the dominant reason to buy a personal computer. Before that, people were using them for cockamamie ideas like balancing checkbooks and doing spreadsheets.

Metcalfe: I conceptualize it as a series of careers in technological innovation. During the student period, you're accumulating knowledge and skills. The scientist period is where you're discovering new knowledge. Engineering, you're taking that knowledge and making products. And then there's the journalism period in which you write about technologies to help build them and help people buy intelligently. And then there is the venture capitalist phase, where you're financing innovative companies.

OI: What advice would you give to those starting a career in technological Innovation?

Metcalfe: I once asked my father what I should do. He said, "It doesn't really matter what you do as long as you're good at it." Be sure you're good at something. Second, you'll never get any good at anything unless you enjoy it. Find something you enjoy, and get good at it.

Innovation and invention are things you do on purpose. It's not a lightning bolt from heaven. You set out to do it. You practice it. You develop innovation skills.

To be an innovator, you also have to be willing to make enemies. I'm proud that I am the kind of person who makes enemies. And I guess it's because I think collegiality is overplayed—it's a pathology of the status quo, which is the enemy of innovation.

You have to be willing to fight the status quo, which is resourceful, nasty, mean and conniving.

Eric Ryan: Turn Off the Tap