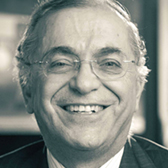 Charles Elachi As a kid growing up in a little village in Lebanon, Charles Elachi was always fascinated when he looked up. The star-filled sky above made him wonder: Are there other life forms out there doing the same thing—looking up at me?

Charles Elachi, head of NASA’s Jet Propulsion Laboratory and longtime space exploration enthusiast, reflects on the teamwork that landed a rover on Mars and counsels that with big risk comes big reward.

When The Henry Ford sat down with Elachi in 2009 as part of its Onlnnovation oral history project, he still had a childlike giddiness about him as he talked about the stars and exploring our solar system and universes beyond. As the current director of NASA's Jet Propulsion Laboratory (JPL), Elachi remains a leading force behind the United States' space exploration program. (He's the guy responsible for launching spacecraft to orbit Saturn and its many moons and for sending those rovers now roaming the surface of Mars—among many other galactic accomplishments.)

With more than 40 years at JPL, Elachi has learned a thing or two about being a strong leader and inspiring innovation. He doesn't claim to know everything, he's not afraid to take the heat when his team fails (or share kudos when a big victory is in sight) and he's always searching for young talent because he sees great value in those who think nothing is impossible.

OI: How does one lead NASA’s space exploration house?

Elachi: You always tell your team to remember that, most likely, things will not work the first time. And if you get discouraged after failure, you'll never be able to innovate.

OI: Where do you start when you want to explore space?

Elachi: The most important thing you need on an expedition of exploration is a good team, because there is this guarantee that problems are going to happen. There will, in fact, probably be problems every other day. Your best bet is to have a team that is with you, able to address those problems, overcome them and move on. No matter how good your design is at the beginning, once you start building, you're going to find issues. Interaction between intelligent people is what will create the innovation.

Ol: How fun is it to imagine and build a spacecraft? Explain the anatomy of a space exploration project.

Elachi: We have more than a dozen spacecraft across the solar system. The lingo here at JPL is that the solar system is our backyard. We get to play in that backyard, but it's serious play.

At first, we're just thinking about doing a flyby. Then, we want to orbit. After the orbiters—and we see things that are geologically very interesting—then we basically want to do what any typical geologist wants to do. We want to get to the surface, walk around, pick up a rock, look at it and test it.

If you're on Mars, of course, you can't just do that, right? It's beyond our current capabilities to send an astronaut. So, instead we build these rovers to be the equivalent of a human geologist.

We had teams of people that got together and started thinking crazy ideas about ways we could get on Mars. For us, it's the equivalent of standing In California, hitting a golf ball towards St. Andrews in England and getting the ball in the cup, which is moving at high speed.

To land a rover on the surface of Mars, we have to start with a heat shield to slow us down, then we have to use a parachute to slow down even more and a rocket to slow down even more. But what about those last 10 meters? Someone came up with the idea to use a bunch of air bags around the rover and just let it bounce. At first it sounded crazy, but actually that's what we ended up doing. The rover gets about 30 feet from the surface, huge air bags inflate and then we let it bounce, bounce, bounce. Once it stops bouncing, we deflate the bags and the rover comes out and has to quickly adapt to an environment never encountered.

OI: You make it sound fairly simple. Was it?

Elachi: Sure it sounds like a simple idea until you start testing. Parachutes broke; air bags were punctured. Literally, every day there was an issue the team had to address.

OI: How do you keep the team motivated through continuous setbacks?

Elachi: You have to stay calm, calm, calm. Your first reaction needs to be, "OK, now how do I solve the problem?" versus "Oh God, we are in deep trouble."

I think that's a characteristic of true innovators. They don't get discouraged or disheartened by a setback. They keep trying again and again, bringing in additional people with different ideas to figure it out.

OI: Your biggest challenge when it comes to leading a team?

Elachi: The biggest challenge for any leader is how do you get your team charged, excited and passionate and think there is purpose to what they are doing. And then how do you help guide them. For me, how do I make sure I have a team of 1,000 people all working together, using their collective knowledge to build complicated machines?

My first reaction when something goes wrong is not to assign blame, but to say, "OK, how do I lift them up? How do I support them to make sure we overcome the setback?" Exploration is a risky business. If we were always successful, I would wonder if we were trying hard enough. The key is, when you overstep or push the limits, you are able to get back up, learn from it and move ahead.

OI: Do you consider yourself an idealist/optimist?

Elachi: You have to be positive and stay curious. I believe that if you are positive and uplifting, you live longer. And you always need to keep asking questions. Every time we complete a mission, every time we do a new experiment, we create more questions. We delve deeper into understanding how did the solar system evolve? We create more wonder about the worlds around us. As scientists, you are never at the end; you will never reach full knowledge.

OI: Are there other leadership lessons you could share?

Elachi: No. 1: You have to have a vision and be able to articulate your vision, get your team excited. So you have to have passion yourself for doing what you're doing. If you don't have passion, you won't be able to transmit your vision. No. 2: You have to bring in the best people in the world, give them a good environment and get out of the way. I don't know all the details. That's why I bring in the experts. People with different backgrounds—mechanical engineers, electrical engineers and so on. We also make sure we bring in young people—nothing seems impossible to them. To balance, we have experienced people who have seen it before and know where you get in trouble.

OI: Is this a business with big egos, lots of arguments?

Elachi: We debate and argue, sure, but as long as it's done professionally and with respect for each other, we encourage it. When you're passionate about something, you're prepared to fight for it. Some of the most valuable people on a team are the ones that are the biggest pains in the neck. These are the people always thinking of problems, but keep us prepared for the "what ifs."

OI: How do you identify people who are motivated, right for your team?

Elachi: When I meet with new employees, I tell them: "If you're looking for a regular job, this is the wrong place for you. But if you have a passion for exploration, if you would love to go home and tell your girlfriend, your mom, your spouse that you just landed a spacecraft on Mars or just flew to Jupiter, then this is the right place for you.

You have to believe in what you are doing, take the setbacks even when it's hard and overcome.

OI: You talked about the solar system as your team’s playground. How do you keep the working environment playful yet mindful in such a high-stakes business?

Elachi: Having fun is a big part of being passionate about what you do. Every time we launch a spacecraft, we have to be very serious about it because we are spending taxpayer money and people have spent years and years designing these missions.

On the other hand, the work has to be fun or who is going to come here and work 60, 80 hours a week until the job is done?

Every morning, I look forward to whatever problem I might face because I am going to learn something new, be enriched and maybe become a little bit smarter. I think most of the people at JPL think about it that way. That this is a playground, but a serious playground.

OI: Why explore? Why do you do it?

Elachi: If our ancestors were not curious, we would still probably be sitting in caves drawing on walls. But they were curious. They wanted to see what's outside. They knew it was dangerous, but they wanted to explore anyway. It's part of human character.

There is this urge to know, be it for intellectual purpose, economic purpose or political purpose. It's an urge we have as humans. On a more scientific basis, I find it fascinating how some 13 billion years ago there was a Big Bang. As we explore space, we are kind of writing the book of how things evolved from that Big Bang. How a bunch of particles got together to create galaxies, planets, life—intelligent life.

We can't write that book in one single sweep. Step by step, we are learning first about our planet, our solar system and then beyond our solar system. If we can find that life evolved somewhere else besides Earth, that would be mind-changing. On the other hand, if we find that we are the only people in this huge universe – billions of stars – that would be equally mind-boggling.

This interview was originally published in the January-May 2015 issue of The Henry Ford Magazine.
Download Issue
See More