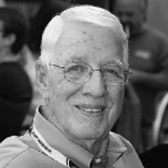 Glen Wood NASCAR has hardly known a time without Glen and Leonard Wood. Founders of Wood Brothers Racing, the brothers are the patriarchs of the oldest continuously operating NASCAR Cup series team. The two are also the celebrated architects of the modern-day pit stop, an ultimate example of precise, choreographed teamwork. The Henry Ford recently talked to Glen Wood about how the pit stop came to be and the discipline and respect required to run a winning racing team and successful family business.

For Wood Brothers Racing founders Glen and Leonard Wood, innovation runs in the family. The brothers discuss teamwork, running a highly successful NASCAR team, and what it took to pioneer the modern pit stop.

THF: The Wood brothers are known for their innovations. How did the idea of the modern-day pit stop come to be?

Glen Wood: It didn’t take us long to figure out that if you made a bad pit stop, you would be real far behind when you went back out on the track. I wouldn’t say we invented the pit stop. We concentrated on it more than others. We just figured out before everyone else that it needed to be done fast.

THF: As you streamlined the process, what worked and what didn’t?

Wood: One of the biggest things we noticed was that it took as many as 15 pumps on the jack to get the car up. My brother Leonard came up with a faster jack that took fewer pumps to get the car off the ground. That jack, which we still have today, was the turning point in our stops.

THF: How, as brothers, did you assign roles within the team? Did particular skill sets set each of you apart?

Wood: As the group went from race to race, we figured out who was best suited for certain jobs. My brother Delano was tall and stout and that made him best suited for being the jack man. In the early days, my brother Ray Lee was probably the quickest of the group, so naturally we made him the guy that changed the tires on the front of the car. Leonard was fast, too, so he changed rears. It took time, but we all fell into our roles.

THF: Did you practice?

Wood: We practiced and practiced, something I don’t believe anybody else did. We tried out different ways, and the ways that felt better and faster were the ones we decided to go with. Leonard was one of the first guys to do an entire tire change himself. In other words, he carried the tire around to the side he was changing, along with the gun, sat it down, took off the old tire, put the new one on and tightened it, then carried it back over the wall.

THF: Is teamwork important to a successful pit stop?

Wood: Real important. When you can predict what the guys are going to do, and you’ve practiced it, naturally it’s going to be more efficient. When everybody pulls in the same direction, it just becomes easy. I think that was what set our pit stops apart. We practiced, and each brother understood and could predict what the others were going to do.

THF: Some feel that working with immediate family can cause conflict. What do you see as some of the key advantages? Potential drawbacks?

Wood: I’ve heard that said—that brothers can’t get along if they work together. We always did because we respected each other. Each brother had a specific position on the team that he was best suited for and that was his responsibility. We were a family. Whether it was because the times were different and respect was a bigger thing back then, or whether we were just the exception, we made it work. Our team is still run by family, and I think that’s because we are such a close bunch.