One of FDR’s most cherished and meaningful phrases—the Four Freedoms— was nearly lost to history.

Join co-curators Stephanie Haboush Plunkett and James J. Kimble and The Henry Ford’s Jim McCabe as they explain how the artistic world, led by the beloved illustrator Norman Rockwell, rescued the president’s phrase from obscurity. Thanks to the home front collaboration between the worlds of politics and art, the Four Freedoms have become enduring ideals that have reshaped the world.

James J. Kimble, Enduring Ideals: Rockwell, Roosevelt & the Four Freedoms exhibition co-curator, is Associate Professor of Communication & the Arts at Seton Hall University. He is a Distinguished Honor Graduate of the US Army’s Chaplain Center and School, has served as a Fulbright Scholar in Croatia, and has been a Senior Fellow at the Rockwell Center for American Visual Studies. Kimble is the author of Mobilizing the Home Front: War Bonds and Domestic Propaganda and Prairie Forge: The Extraordinary Story of the Nebraska Scrap Metal Drive of World War II, as well as the writer and co-producer of the feature documentary Scrappers: How the Heartland Won World War II. His most recent book, co-edited with Trischa Goodnow, is The 10¢ War: Comic Books, Propaganda, and World War II.

Stephanie Haboush Plunkett is the Deputy Director and Chief Curator of the Norman Rockwell Museum. The curator of many exhibitions relating to the art of illustration—including Enduring Ideals: Rockwell, Roosevelt & the Four Freedoms; Inventing America: Rockwell and Warhol; Rockwell and Realism in an Abstract World; Roz Chast: Cartoon Memoirs; The Unknown Hopper: Edward Hopper as Illustrator; Ephemeral Beauty: Al Parker and the American Women's Magazine: 1940-1960; LitGraphic: The World of the Graphic Novel; and The Art of The New Yorker: Eighty Years in the Vanguard—she has previously held positions at the Brooklyn Museum, Brooklyn Children's Museum, and the Heckscher Museum of Art. She leads the Rockwell Center for American Visual Studies, the first scholarly institute devoted to the study of illustration art; Drawing Lessons from the Famous Artists School: Classic Techniques and Expert Tips from the Golden Age of Illustration, published by Quarry Books, is her most recent publication.

Jim McCabe is Chief Collections Manager at The Henry Ford, where he has worked for the past 25 years. Prior to coming to The Henry Ford, he was a Guest Curator at the Norman Rockwell Museum in Stockbridge, where he curated two exhibitions, Four Freedoms and Mirror on America for their new museum building. As part of that work, he co-authored Norman Rockwell’s Four Freedoms: Images that Inspire a Nation. 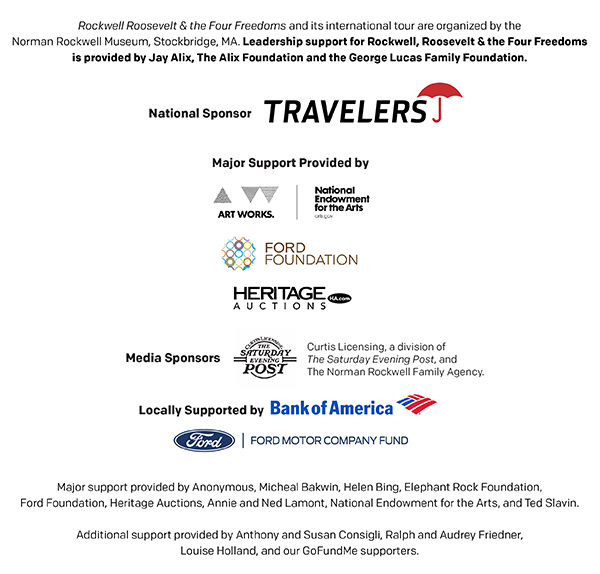