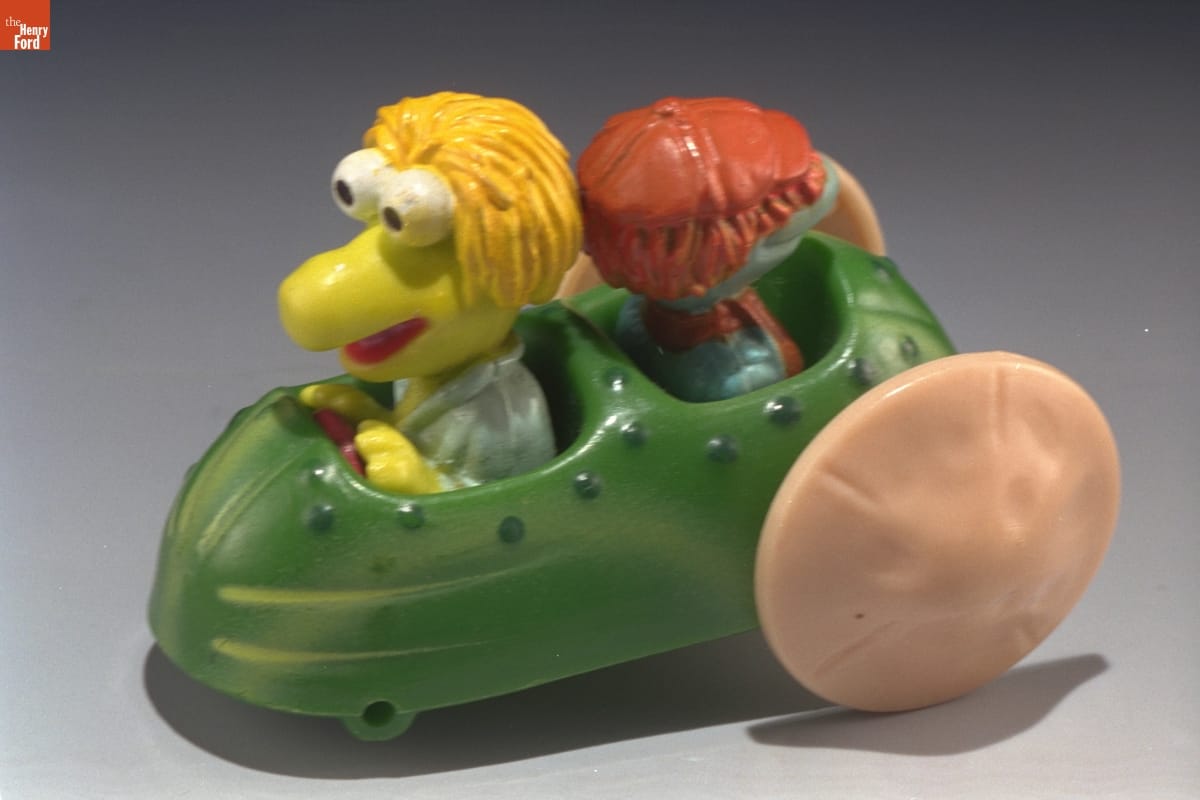 Characters Wembly and Boober in a pickle-shaped vehicle Happy Meal toy, 1988. This tie-in dates back to the Fraggle Rock with Jim Henson’s Muppets TV show that debuted in 1983, but more specifically to the Fraggle Rock Saturday morning animated cartoon series that premiered in 1987. THF308669 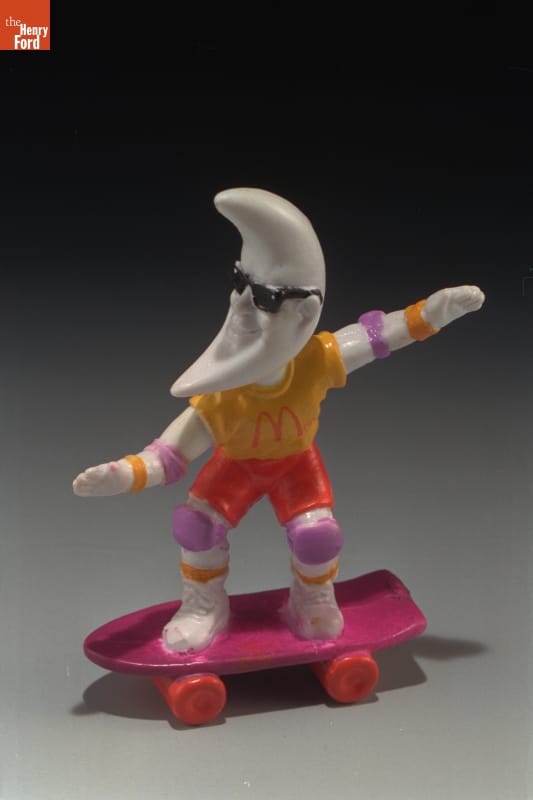 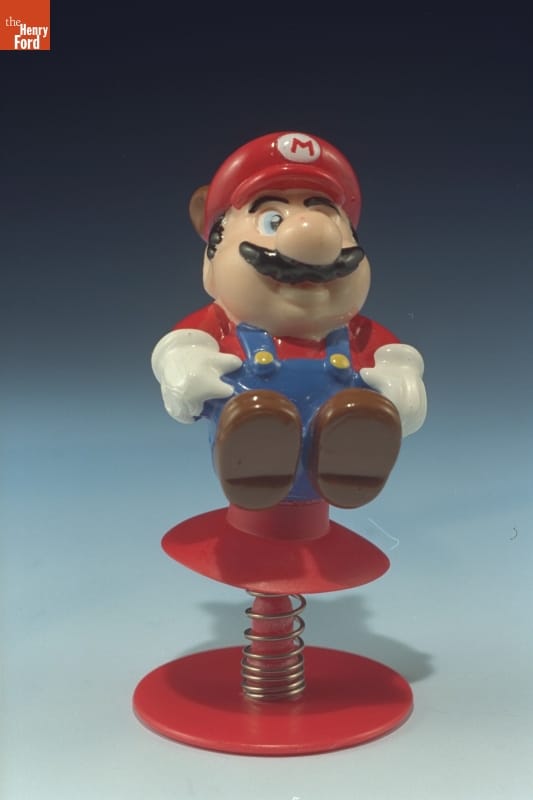 On June 11, 1979, McDonald’s introduced its first national Happy Meal promotion. Called Circus Wagon, it included six different cardboard boxes designed to look like festively decorated circus wagons. Each box, topped with handles shaped like the familiar golden arches, held a kid-sized meal and included a small toy, or premium, inside. The toys, depicting McDonald’s characters, were simple: erasers, decals for plastic ID bracelets, and “doodler” rulers incorporating different shapes with which to draw along with the measured ruler. Who knew at the time what a phenomenon Happy Meals would become? As of this month, they have been with us for 40 years! 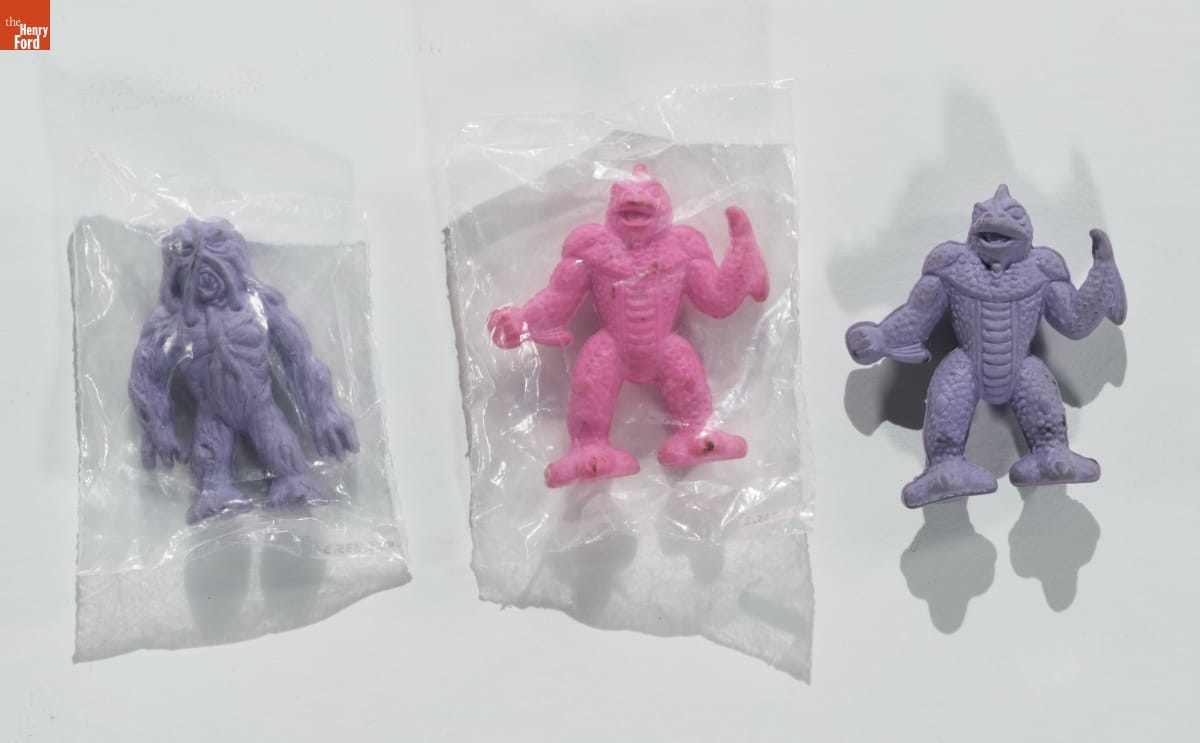 These rubber “Space Aliens,” featured in a 1979 Happy Meal promotion and made by Diener Industries, were also sold at retail stores as novelty pencil erasers. THF175125 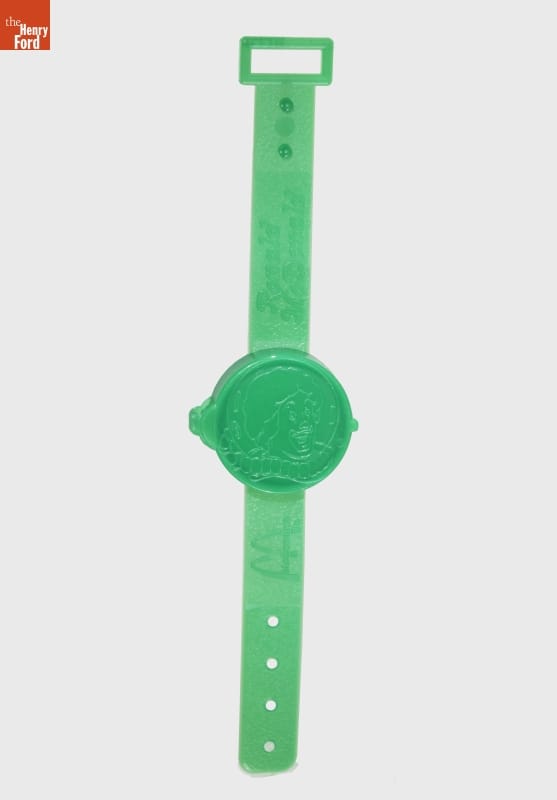 Origins
This plastic “McWrist” wallet was part of a 1977 regional test promotion for the Happy Meal concept. THF175122

Although the origins of Happy Meals are a bit murky, McDonald’s officially credits their “invention” to Missouri-based advertising executive Bob Bernstein. After noting the success of a kid-sized meal introduced by a McDonald’s operator in Guatemala and market testing several variations in different cities, Bernstein opted for the Kansas City, Missouri, test version: “a hamburger, fries, soft drink, packet of cookies, and a surprise inside the happiest box you ever saw.”

At the time, Bernstein was convinced that the container for the meal was the most important component. So, he engaged nationally known children’s illustrators to design the graphics, jokes, games, and stories that appeared on the boxes. Who knew back then that it was the “surprise,” the little toy inside, that would be the key to Happy Meal’s success? 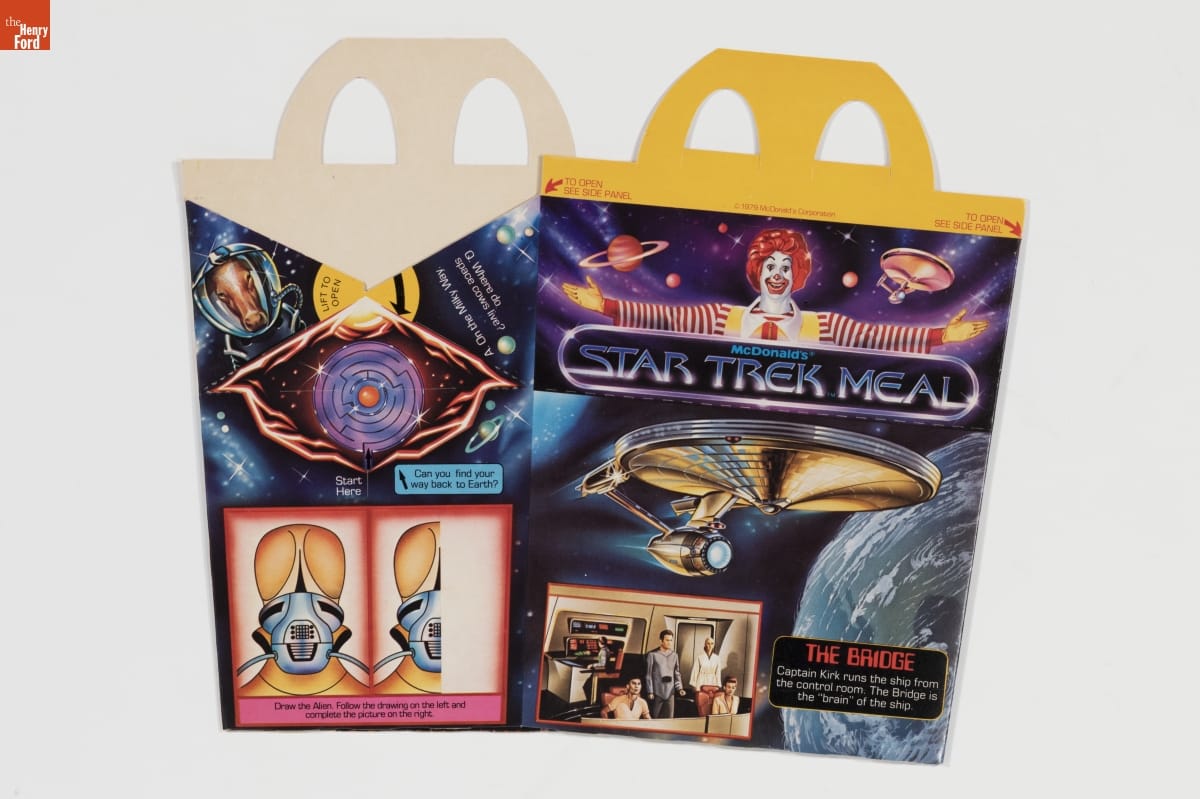 The Star Trek Meal
The 1979 Star Trek Meal marked a turning point in Happy Meal history, with the first Happy Meal designed to cross-promote a mass media feature, Star Trek: The Motion Picture. In the style of early Happy Meals, the boxes were striking, while the toys inside were still small and innocuous—a space ring, an iron-on transfer, a wrist bracelet, and a paper fold-out board game. 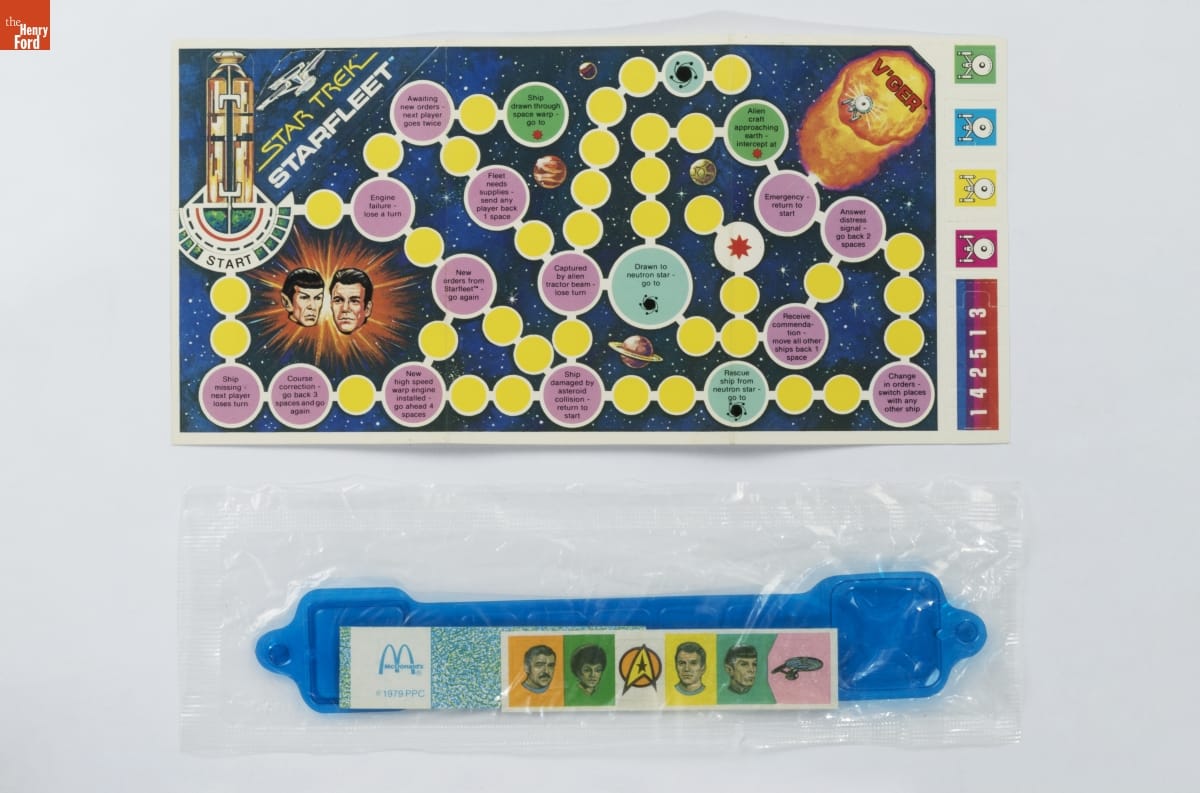 All Aboard the Birthday Train! 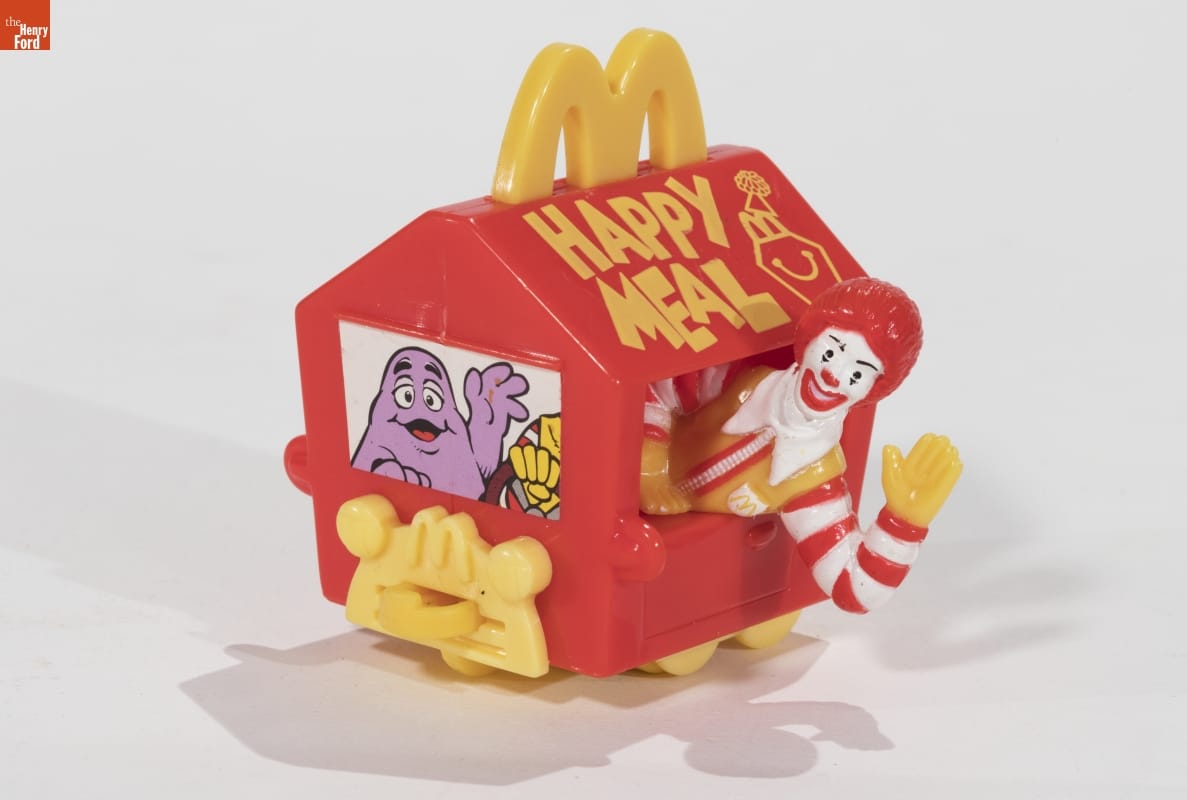 As McDonald’s began to focus on the toys rather than the boxes and to seek media tie-ins with their promotions, the popularity of Happy Meals grew by leaps and bounds.

In 1994, McDonald’s celebrated the 15th anniversary of its Happy Meals with a special promotion of 15 premiums, each reflecting a different promotion from the previous years. These premiums could be interlocked to create a 15-car circus train—harkening back to the first national Circus Wagon Happy Meal promotion of 1979. Kids were surprised, then delighted, to find that when they moved the train along, each of them would spin, jump, or rotate on its own little train car. The Happy Birthday Happy Meal birthday train, part of The Henry Ford’s large collection of early kids’ meal toys, is featured here in its entirety. So hop aboard for a ride through the first 15 years of McDonald’s Happy Meals! 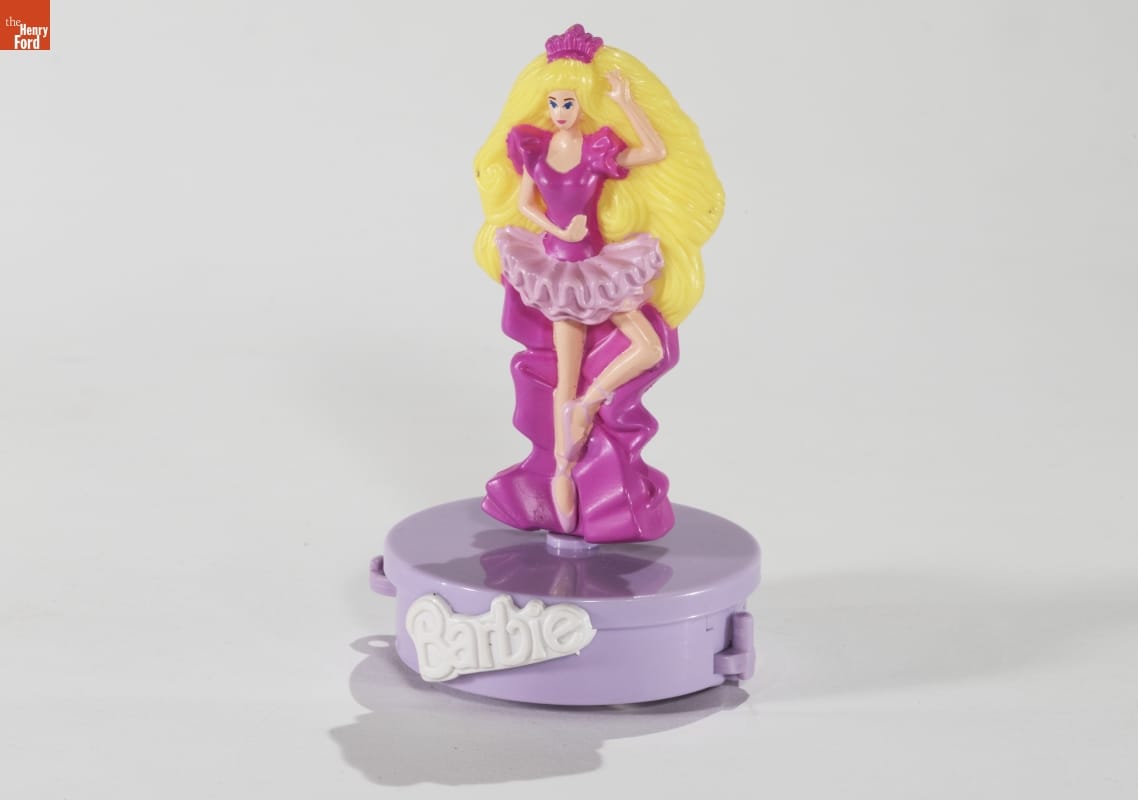 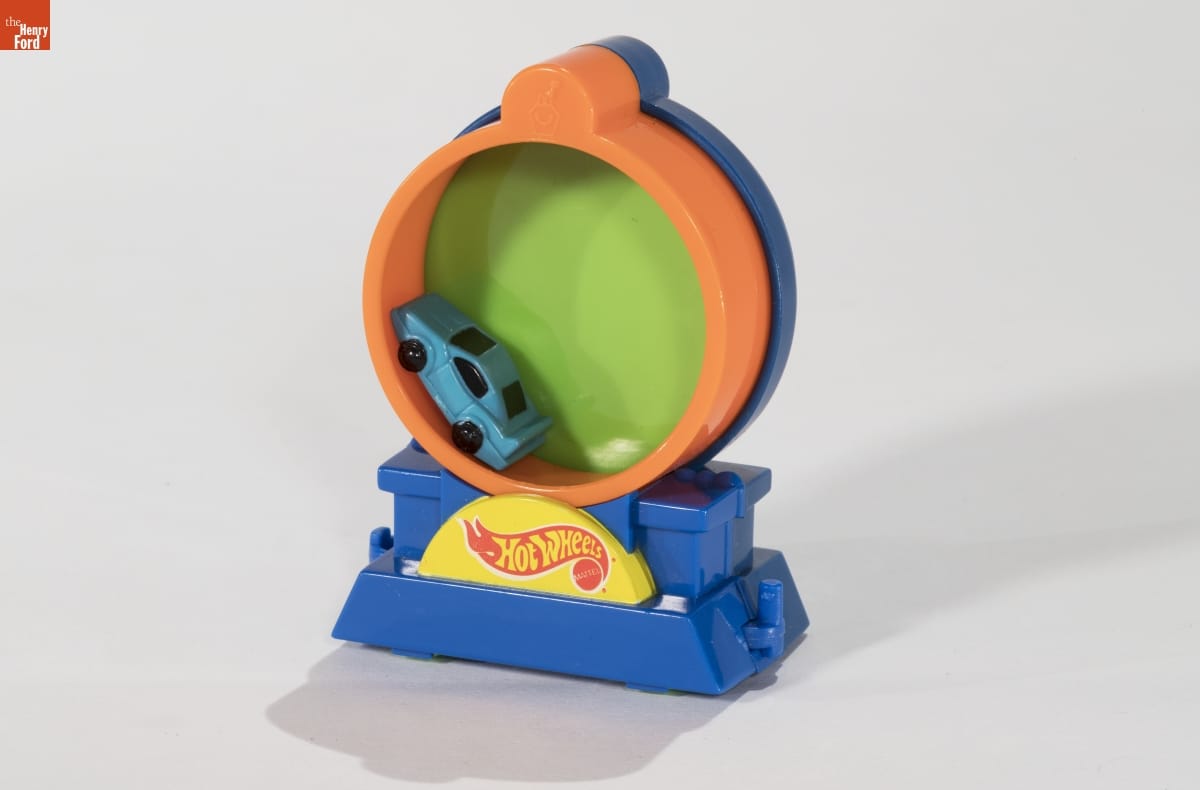 These date back to a Barbie-Hot Wheels Mattel tie-in from 1991.  The pairing of Barbie and Hot Wheels proved so popular that it returned three times in the early 1990s.  This promotion was the first to feature 16 different premiums and the first to offer separate premiums for both girls and boys (though sometimes girls preferred the Hot Wheels to the Barbie). Each original premium came with a coupon for purchasing the full-size toy in retail stores. As part of the birthday train, this Barbie twirled around, while the Hot Wheels car revolved inside the drum. 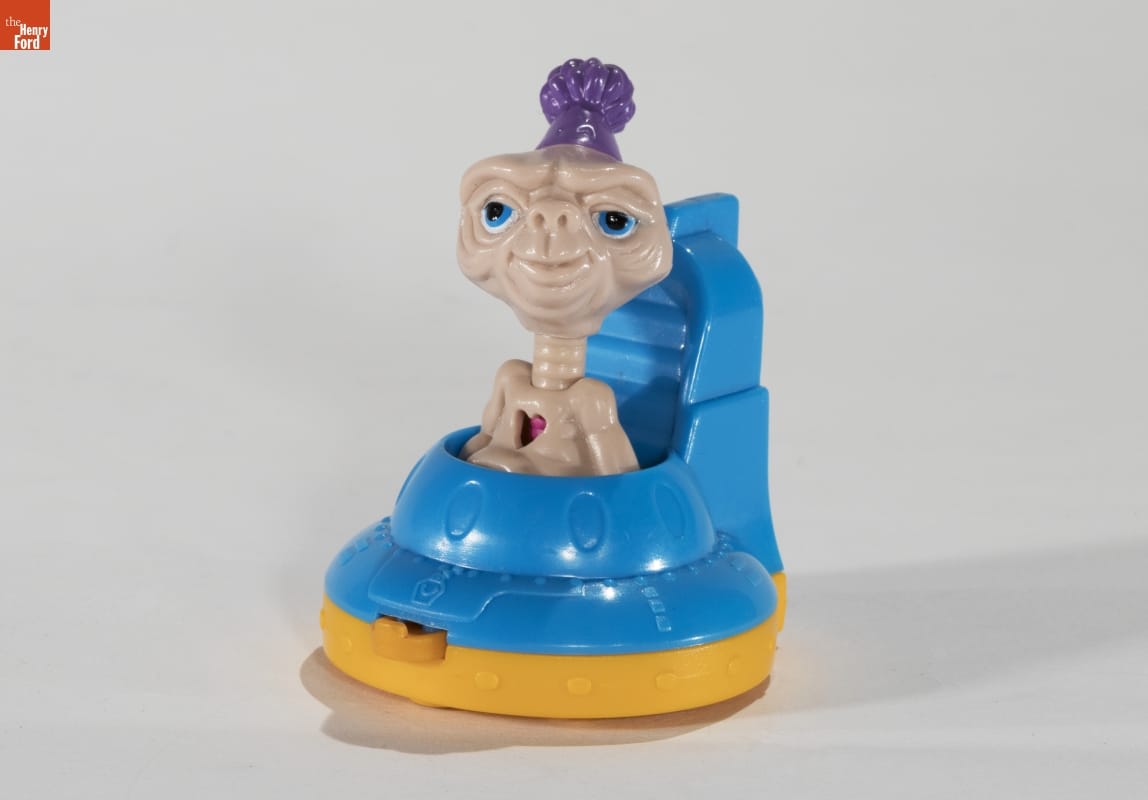 This figure references the 1985 re-release of the 1982 movie ET, The Extra Terrestrial.  The 1985 Happy Meal promotion featured four four-color posters that had to be hand-rolled by employees and secured with rubber bands as they would not fit into Happy Meal boxes. All royalties for the original promotion were donated by McDonald’s to the Special Olympics. As part of the birthday train, ET’s neck rose up and down. 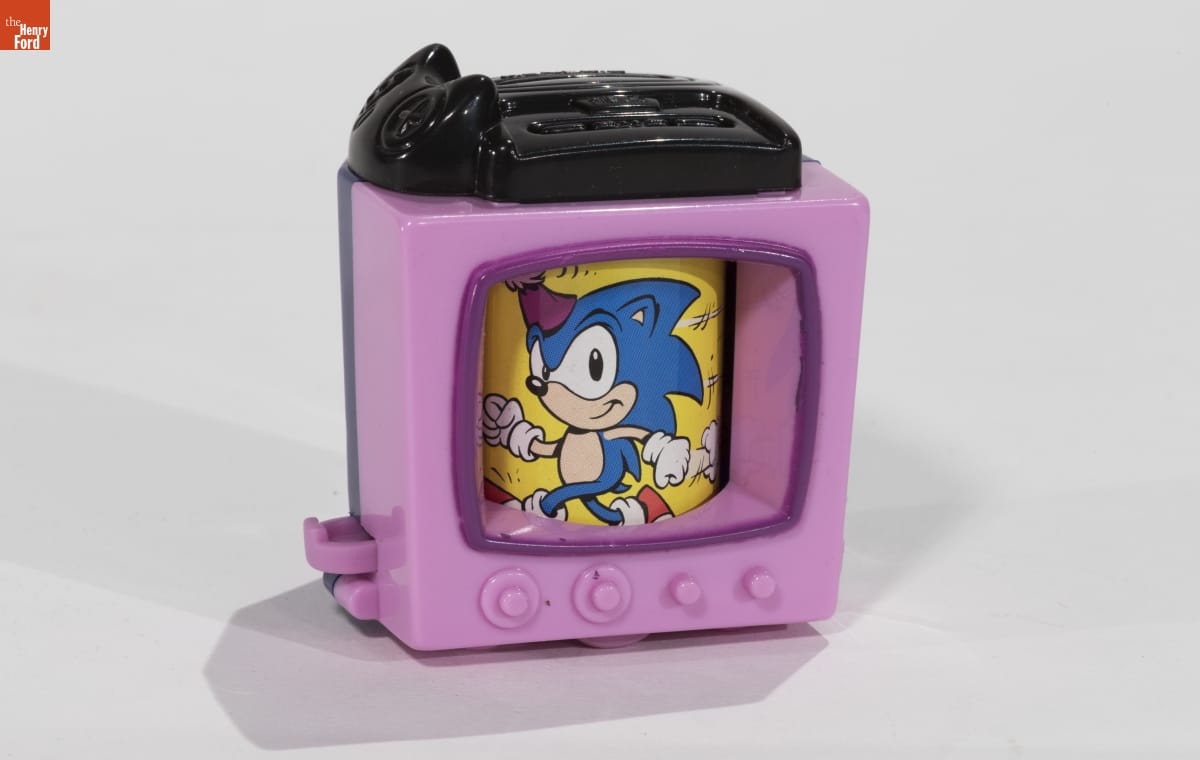 This 1994 promotion was a tie-in to both the release of Sega’s Sonic the Hedgehog 3 videogame (Sonic was created to compete with Nintendo’s mascot, Mario) and the Saturday morning Sonic the Hedgehog cartoon which premiered in 1993. As part of the birthday train, the paper “screen” revealed different scenes as it revolved inside the “television.” 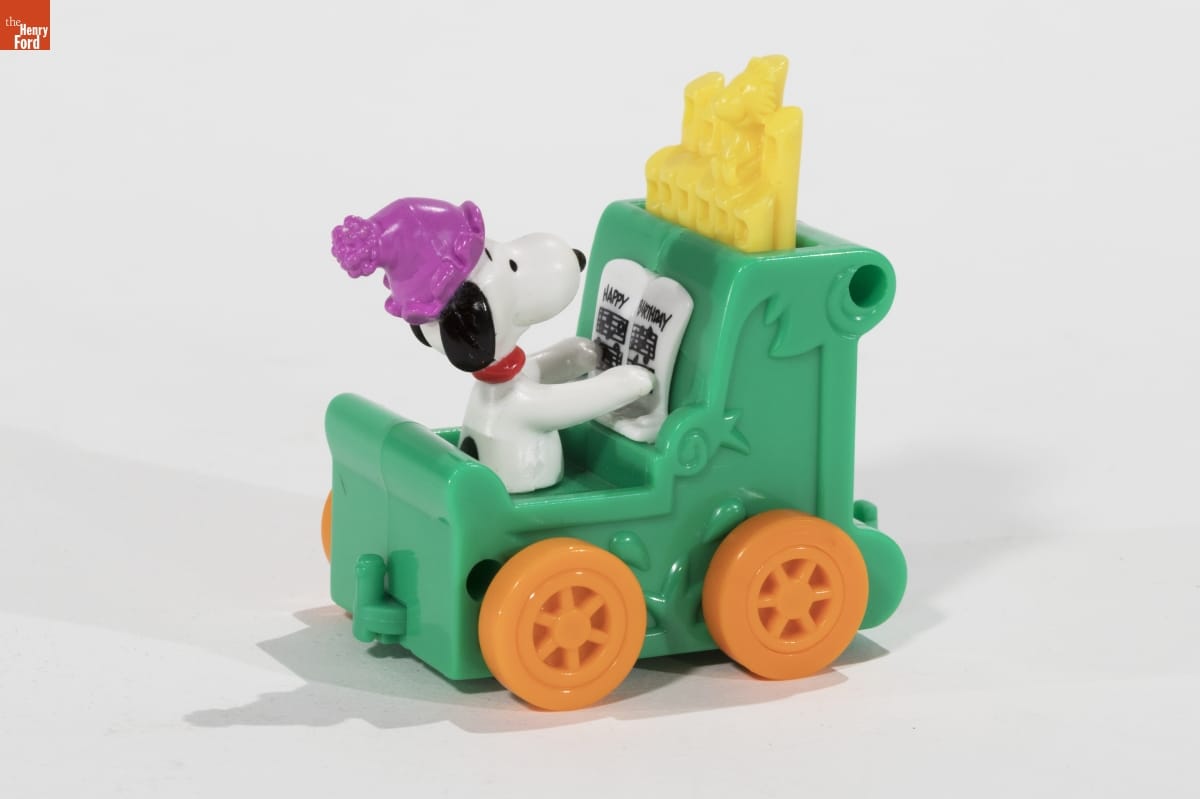 This birthday train car commemorates the 1990 Peanuts promotion that featured different Peanuts characters in a farm setting.  That series marked the 40th anniversary of the Peanuts cartoon strip by Charles M. Schulz.  When pushed along, the organ “pipes” on this train car—shaped like a pack of French Fries—rose and fell. THF319292 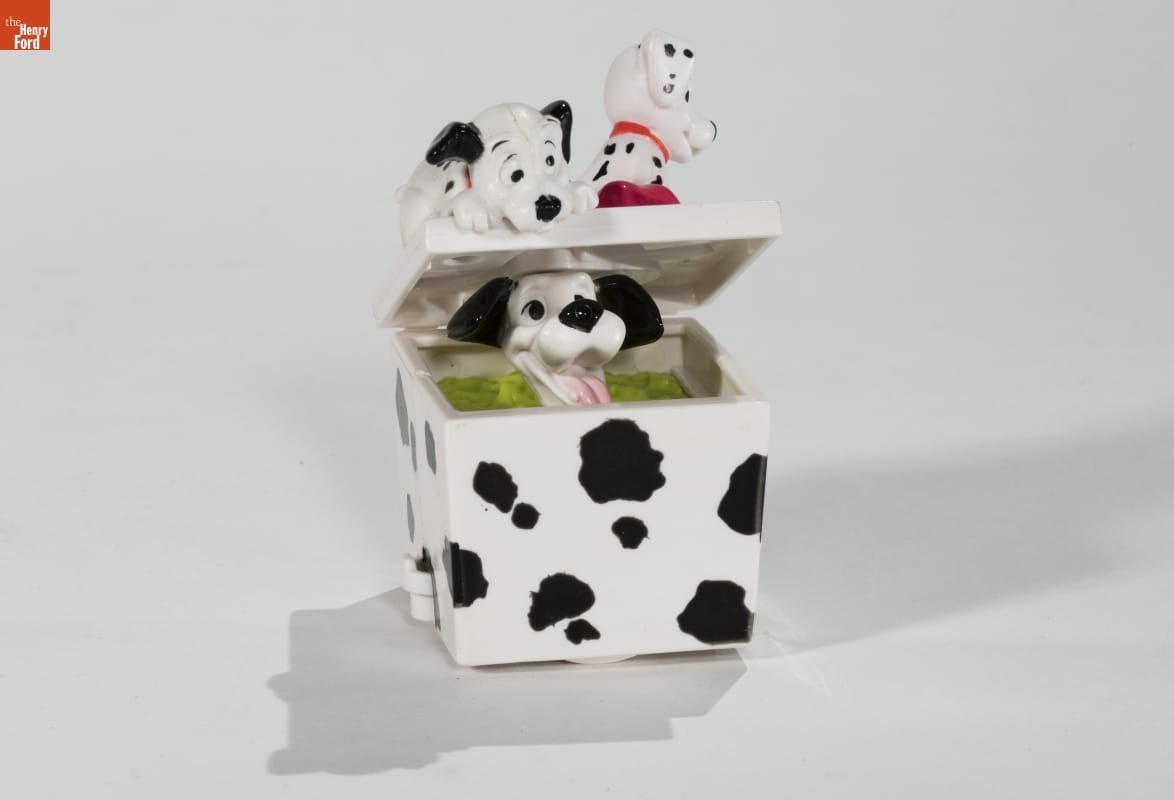 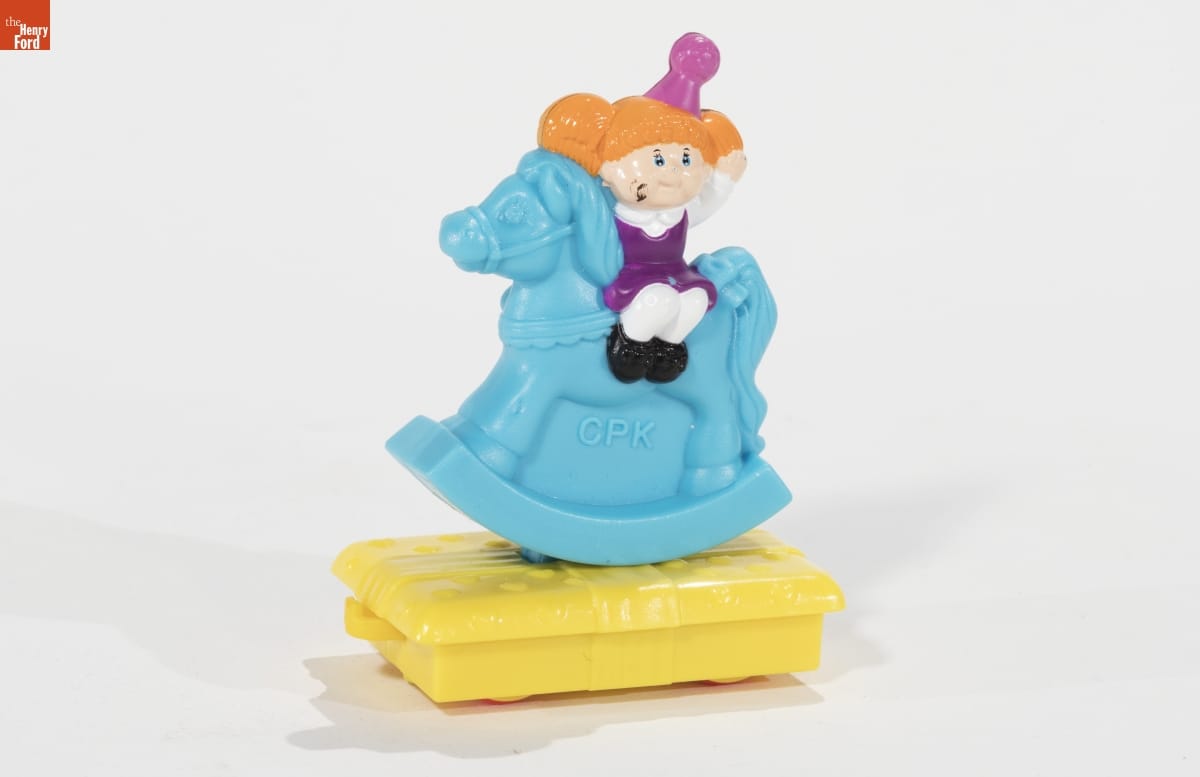 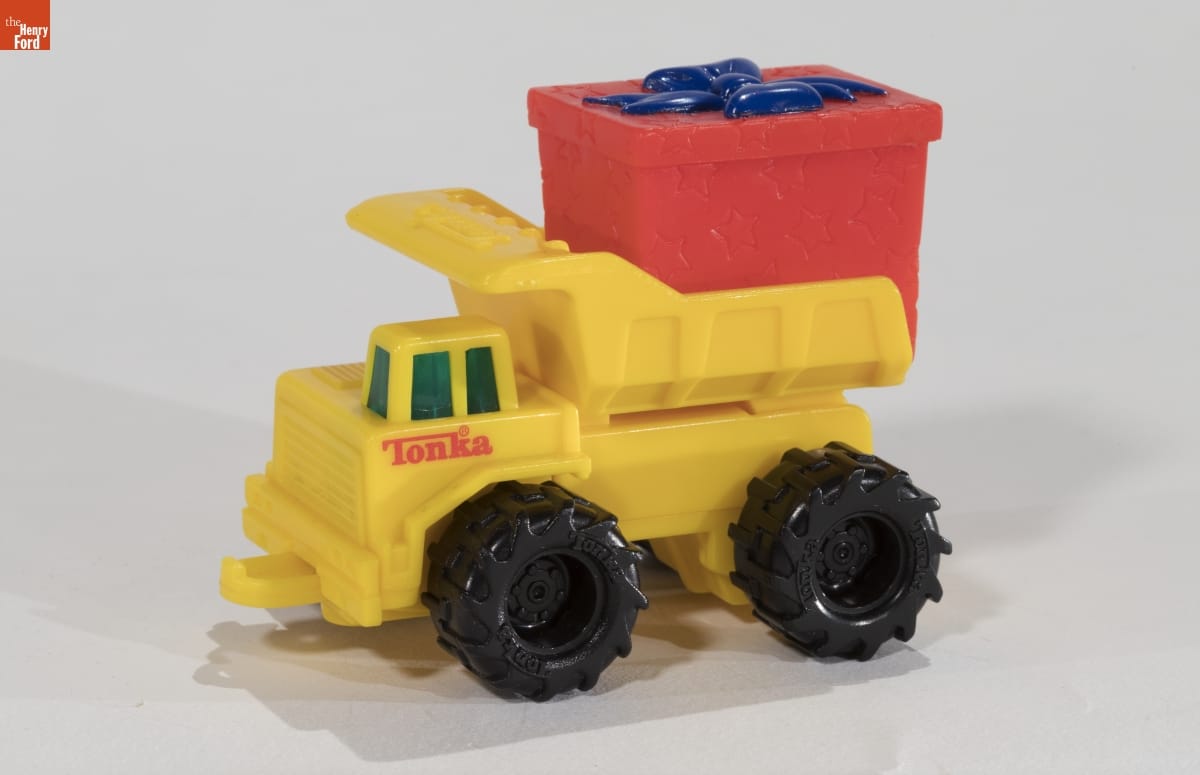 These two figures harken back to the Hasbro tie-in from 1992 that featured both 5 poseable Cabbage Patch kids with “real” yarn hair and 5 heavy-duty mini-Tonka utility vehicles.  On the birthday train, the Cabbage Patch Kid’s horse rocked while the Tonka truck’s open-box bed lifted and dumped the present out. 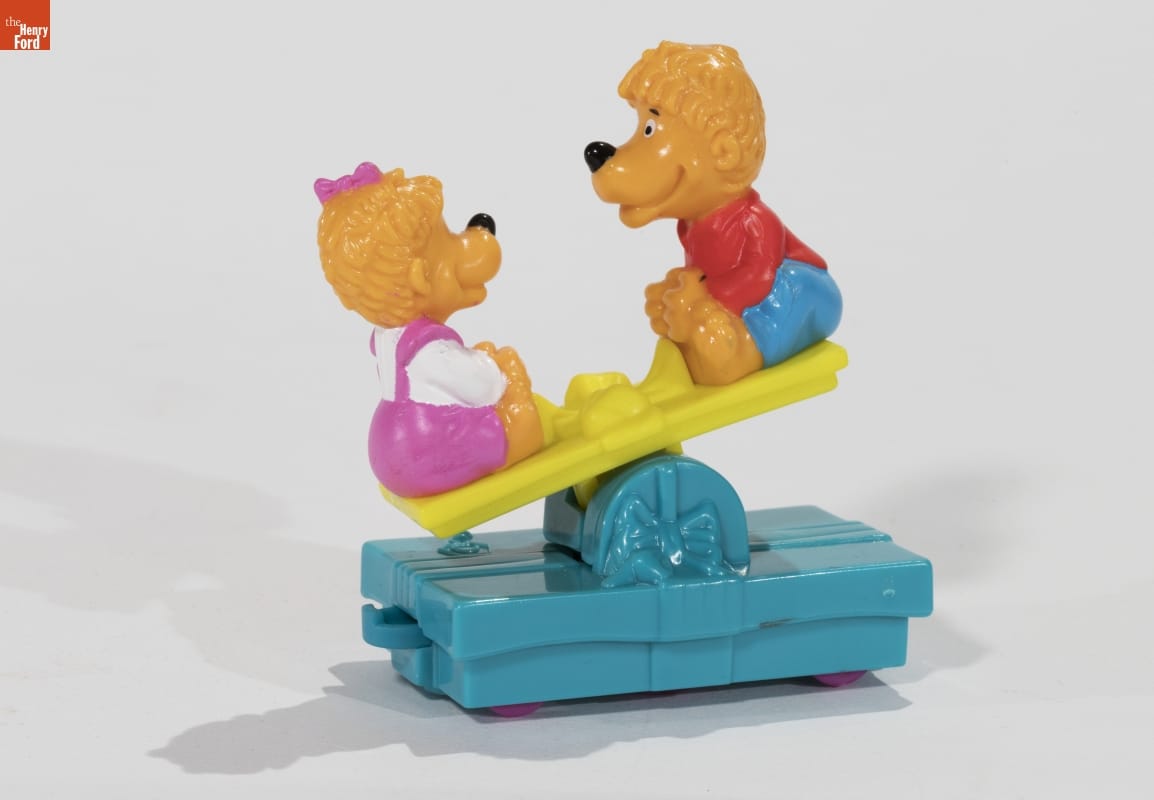 This birthday train car relates back to the 25th anniversary promotion (1987) of the beloved Berenstain Bear book series created by Stan and Jan Berenstain. Stories about Mama, Papa, Brother, and Sister were also featured on a Saturday morning cartoon beginning in 1985. As part of this train, the seesaw went up and down. 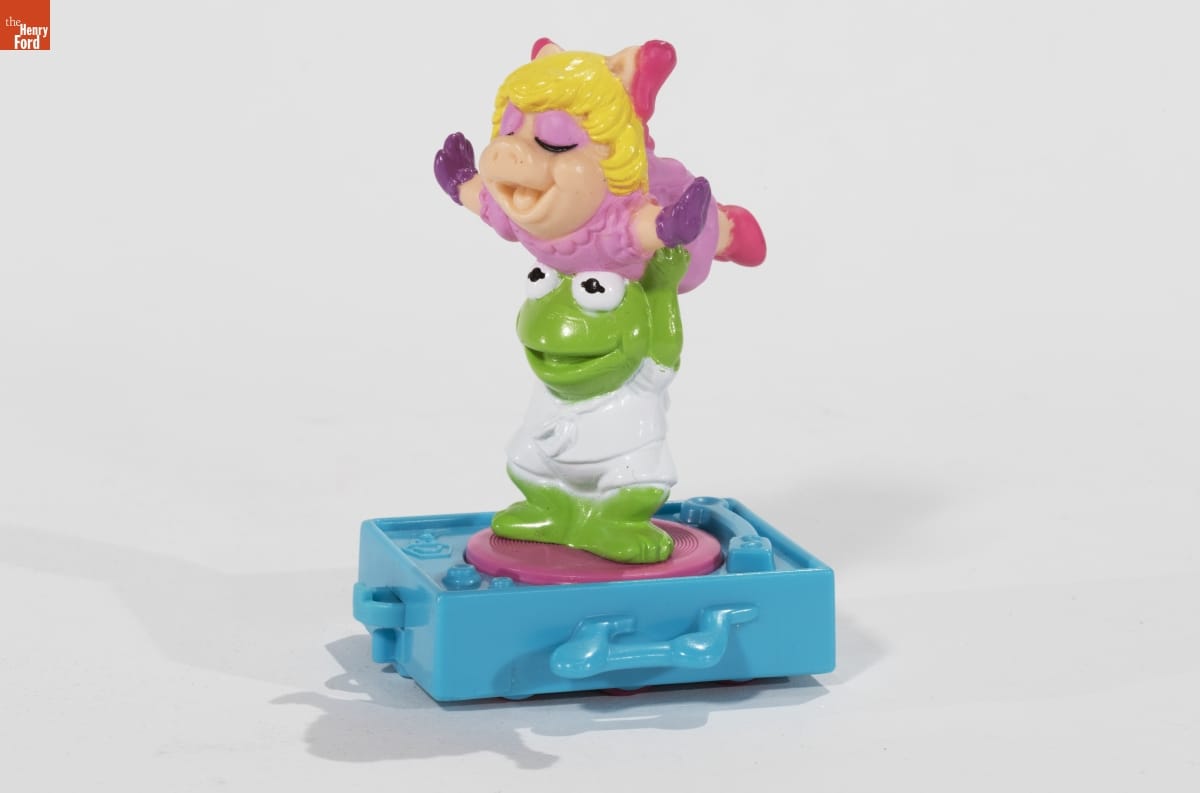 Jim Henson’s Muppet Babies first appeared in a flashback sequence in the 1984 film, The Muppets Take Manhattan, then were featured in their own Saturday morning cartoon series.  The original Happy Meal promotion, with four Muppet characters each on a moving wheeled vehicle, dated from 1987.  As part of the birthday train, babies Kermit and Piggy twirled around. 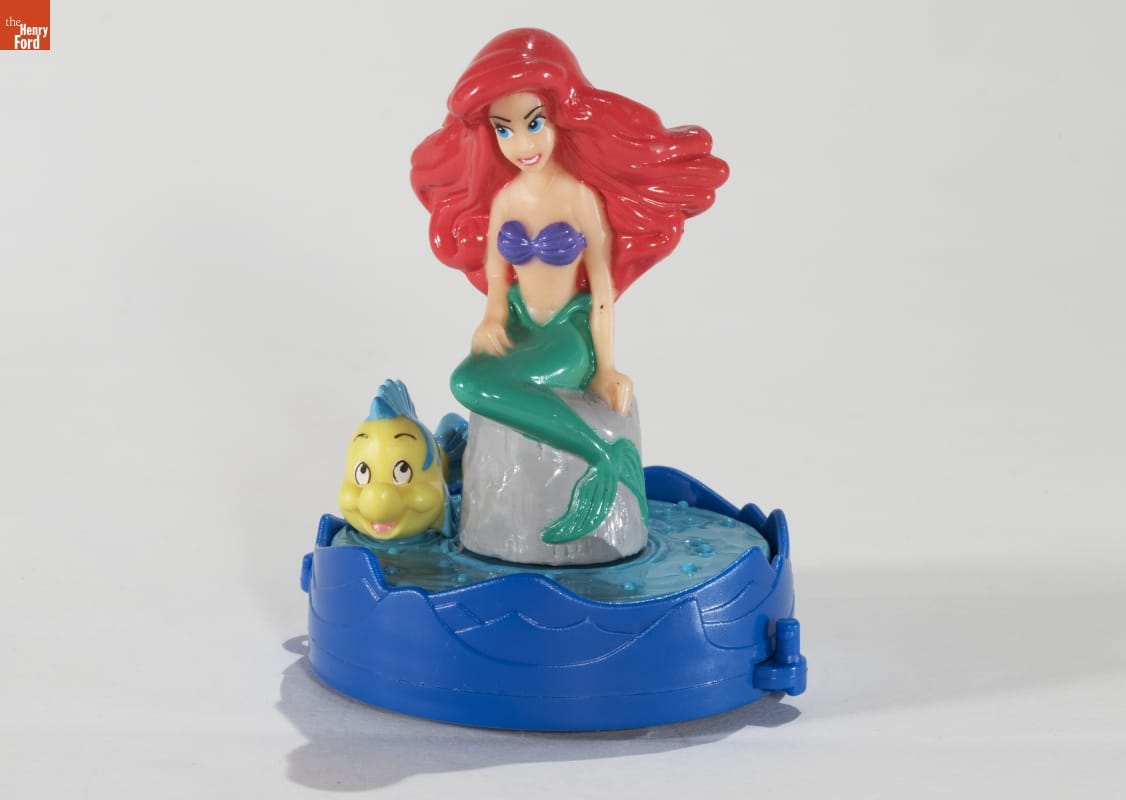 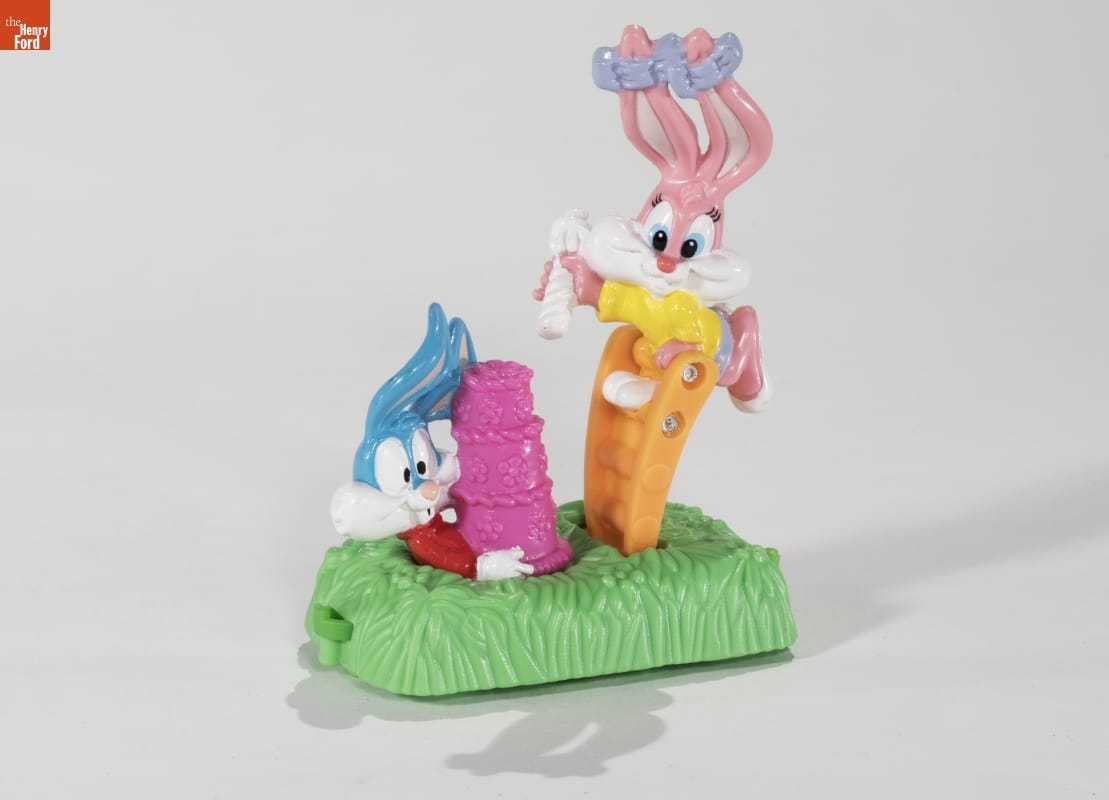 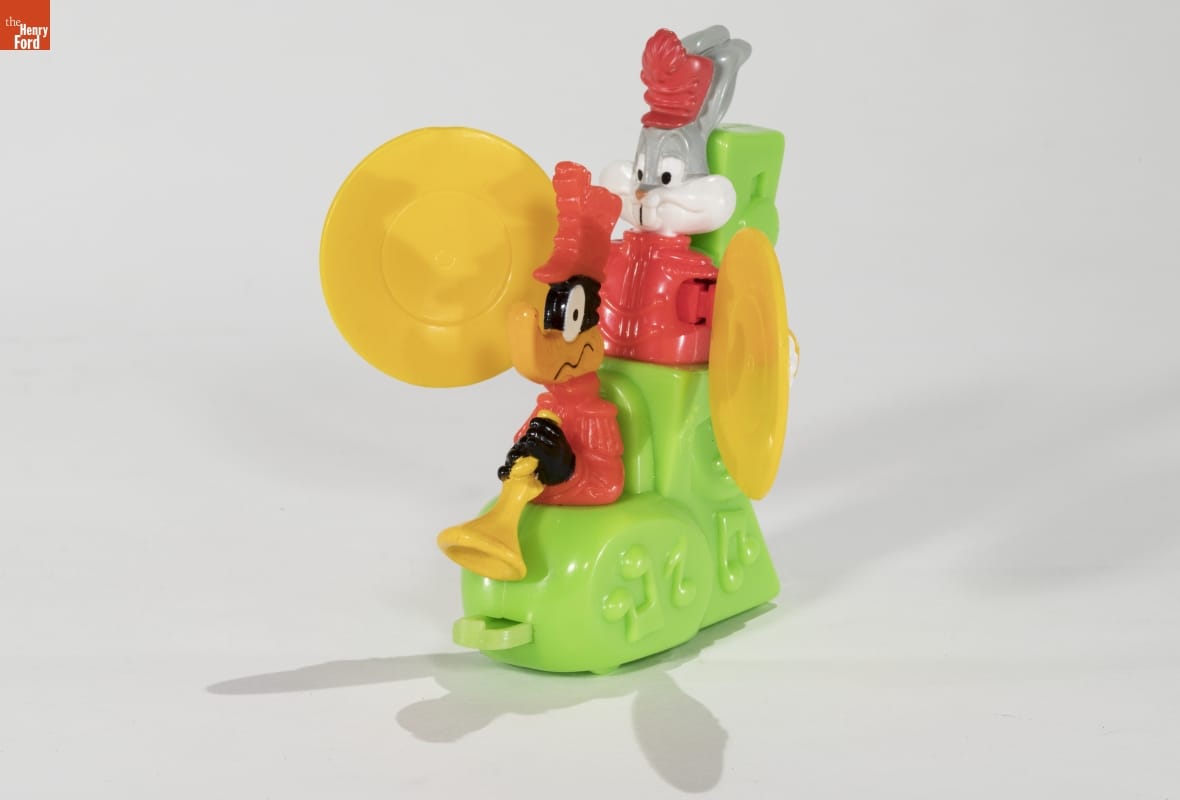 These two birthday train cars represent Warner Brothers promotions from 1991: Tiny Toon Adventures based upon the Saturday morning cartoon of that name and Super Looney Tunes—in which five different Looney Tunes characters came with add-on super-character suits. When the Tiny Toons car was moved, Babs Bunny placed a candle on and off the top of the birthday cake. On the Looney Tunes car, the pair of cymbals that Bugs is holding closed in and out around Daffy Duck’s head. 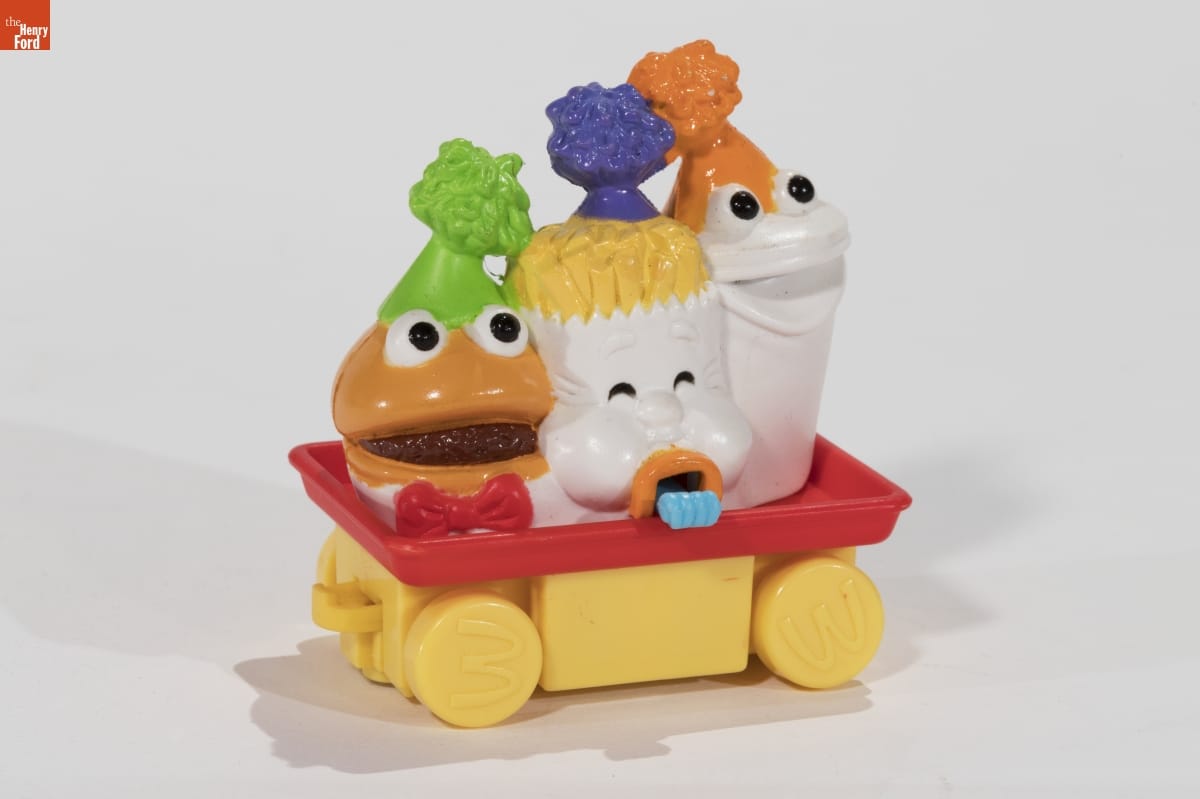 The “Happy Meal guys” bought up the rear on the Happy Birthday Happy Meal caboose, 1994. When pushed along, the French Fry’s party horn moved in and out.

Teenie Beanies Conquer All
By 1997, McDonald’s had sold over 100 million Happy Meals. They seemed successful and popular. But then, between the short window of April 11 and May 15 of that year, Teenie Beanies were introduced, taking advantage of the Ty Beanie Babies craze. This promotion blew all previous ones out of the water. Families who had never even visited McDonald’s were suddenly waiting in long lines to order Happy Meals. For many kids who grew up in the 1990s (and their parents), it was the most memorable Happy Meal promotion ever. 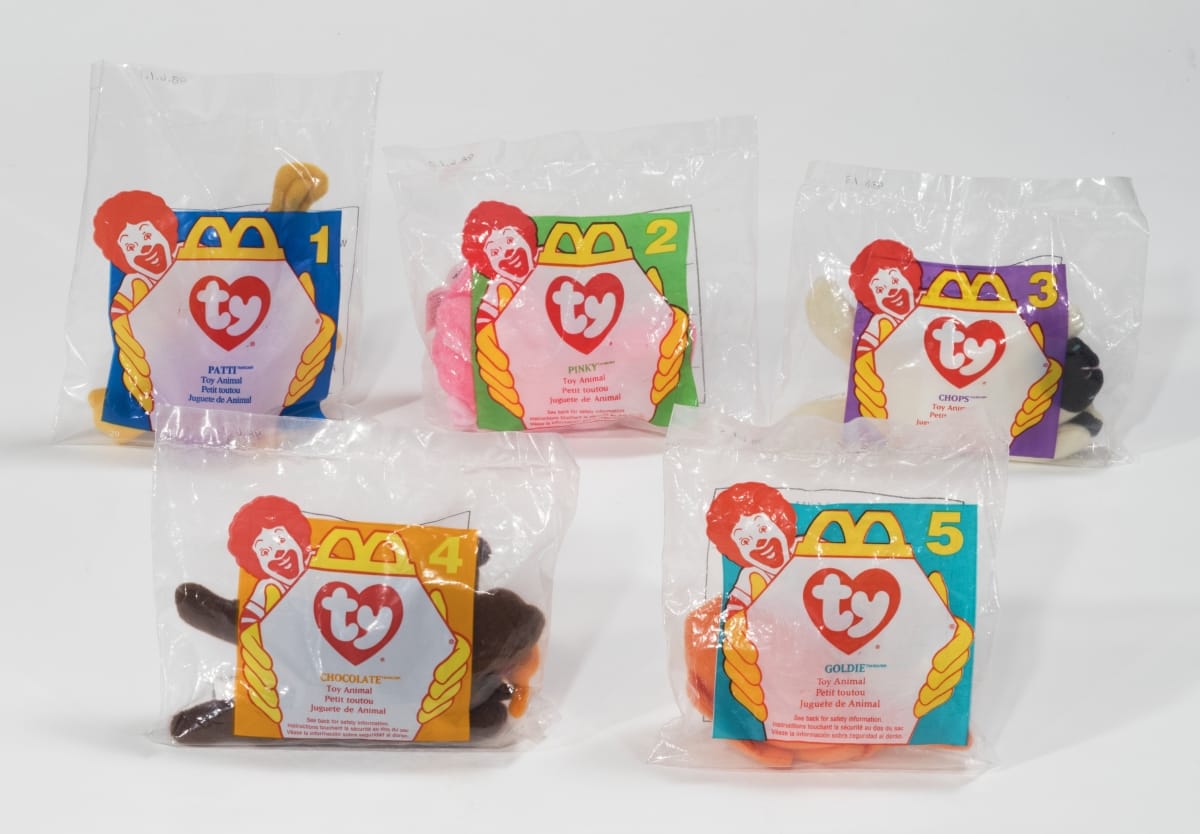 This promotion also firmly established the adult hobby of collecting Happy Meal toys. So many adults came in to purchase Happy Meals just to collect the Teenie Beanies—and so much food was wasted as a result—that McDonald’s began, from then on, to charge separately if customers just wanted to buy the toy. 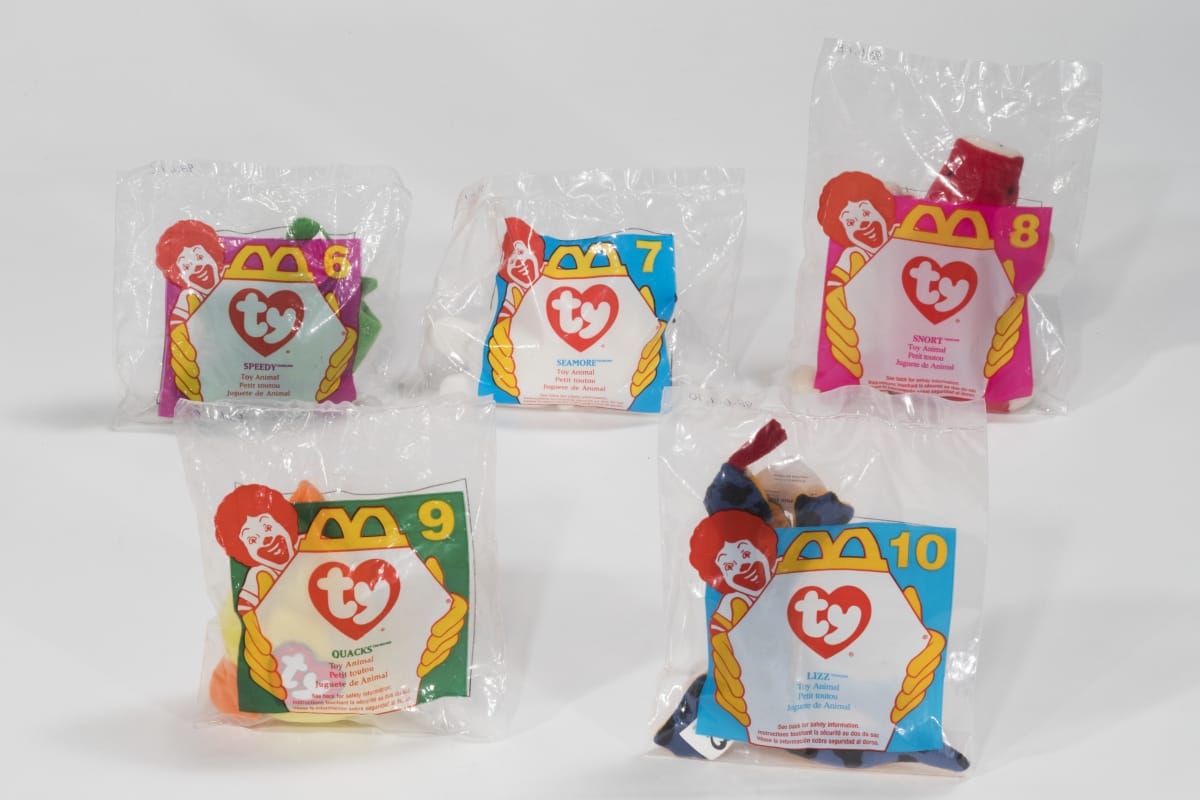 While several series of Teenie Beanies were released after 1997, the 10 mini-versions of Beanie Babies from that year were the most successful.

Still Going Strong
Though many other fast food establishments have offered kids’ meals and related premiums, McDonald’s Happy Meals have remained the most enduring and popular. They have not been immune to attack, especially by parents and healthy eating advocates, and there has been recent talk of repurposing kids’ meal toys into apps and digital downloads. Despite these trends, there is no denying the visceral quality of pulling out, unwrapping, and playing with a new Happy Meal toy. For 40 years, they have made kids happy, let parents enjoy their own meals, reflected popular trends, and become an inescapable part of our culture.

Donna R. Braden, Senior Curator and Curator of Public Life, was one of those Moms who actually enjoyed waiting in long lines at McDonald’s for the thrill of getting the latest Teenie Beanies.