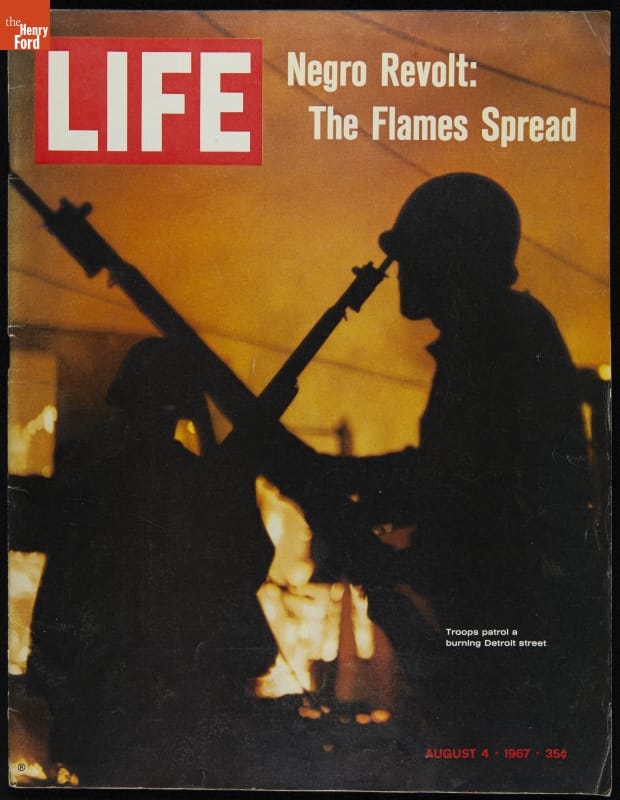 Resources from The Henry Ford for the Detroit 67 Project
As 2017 marked the 50th anniversary of the tumultuous summer of 1967 in Detroit, The Henry Ford collaborated with The Detroit Historical Society in its important community engagement project, “Detroit 67: Looking Back to Move Forward.”

Why Remember Detroit '67?
What started out as a police raid on an after-hours club early Sunday morning, July 23, 1967, escalated into five days and nights of uncontrolled violence, looting, and arson that left 43 people dead, 1,189 injured, and over 7,200 arrested.  While civil unrest had occurred in many other cities before and during that summer, this event stood out as the largest of these uprisings until the riots that followed the assassination of Dr. Martin Luther King, Jr. in April 1968.

Many people wondered how this could happen in Detroit—a city thought to have good race relations. What soon became apparent was African Americans’ anger and frustration at the lack of progress that had been made in achieving basic rights and equality, even after the long struggles of the Civil Rights movement and the passage of the Civil Rights Act of 1964. Several root causes of the uprising were cited, including: unemployment and job discrimination, substandard housing, poverty, low-quality education, lack of access to medical facilities, police brutality, mistreatment by white merchants, shortage of city services, and white indifference to these problems.

Despite efforts on many fronts to move past the devastation and bitter memories of 1967, Detroit is still considered a divided city today.

The Detroit 67 Project
The vision of The Detroit Historical Society’s groundbreaking project is to use the memory and legacy of this historic crisis as a “catalyst to engage, reflect, and provide opportunities to take the collective action that can help move our community forward.” To accomplish this, the Society has encouraged community-wide collaborators to lead programs, workshops, and discussions, collect oral histories, and/or share related archives and collections through exhibitions, publications, or websites. We have chosen to share digital content on our website related to topics that laid foundations for and offered responses to the upheaval that occurred in Detroit (and other cities) in 1967.

Our Involvement
Our mission, core collecting topics, and strategic plan all make this collaboration a perfect fit for us. First, our mission statement includes a call to action: to inspire people to shape a better future by learning from the traditions of ingenuity, resourcefulness, and innovation. Second, one of our core collecting topics is social transformation, which involves a shift in people’s collective consciousness, leading to new values, relationships, and patterns of behavior. Finally, aligning with our larger institutional strategic plan, the goals for digital content on our website include relevance, community impact, national awareness, and sustainability.

Because of the national scope of our collections, we have organized our digital offerings listed below into categories of before and after the events of July 1967. We hope this rich and wide-ranging content deepens your understanding of the foundations, context, and impact of this historical crisis. This content not only sheds light on the past but can also provide a jumping-off point to encourage conversation and inspire action into the future.