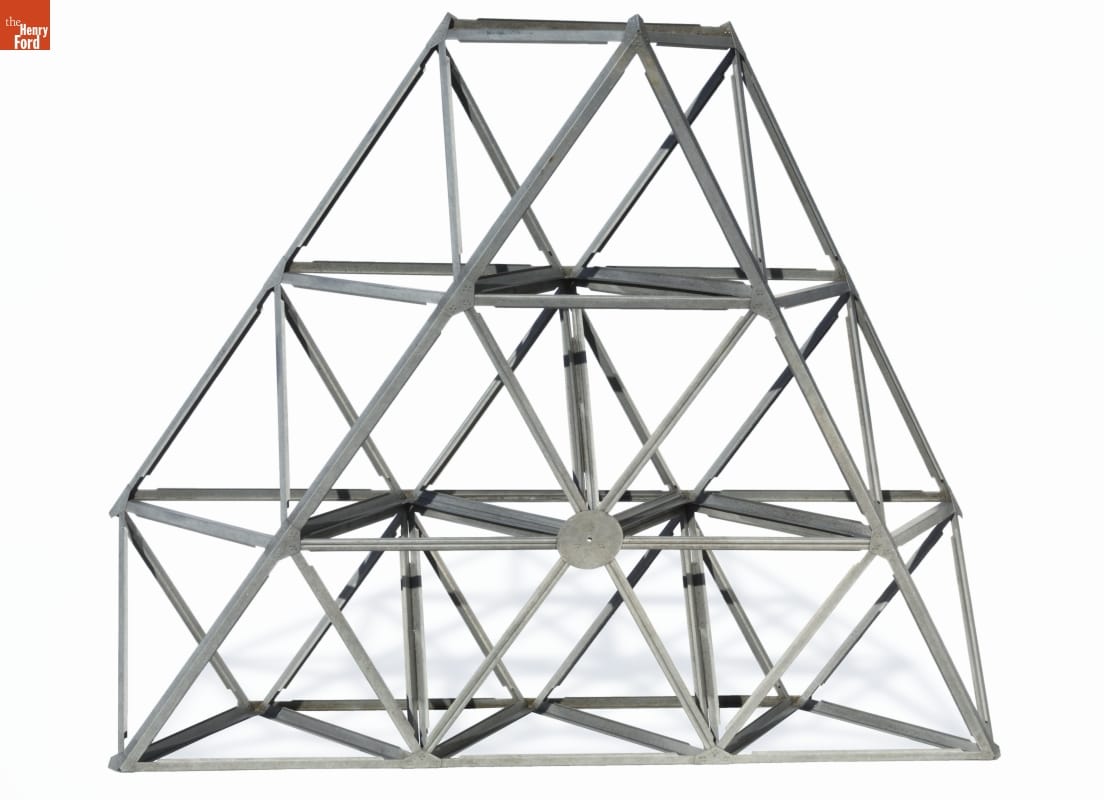 One of the key aspects of the Dymaxion House in Henry Ford Museum is its central mast, which supports the entire structure. Buckminster Fuller, who created Dymaxion, had a lifelong interest in creating maximal structural strength with minimal materials and weight, most famously seen in his work with geodesic domes. When Fuller won his first commission for a geodesic structure, the Ford Rotunda, he worked with the Aerospace Engineering Lab at the University of Michigan to create a truss for load testing. Saved twice from being discarded by university staff, this test module was donated to The Henry Ford in 1993.

It’s newly digitized and available for viewing in our Digital Collections, along with many other artifacts related to geodesic domes, Buckminster Fuller, and the Dymaxion House.

Dabbling with the Dome 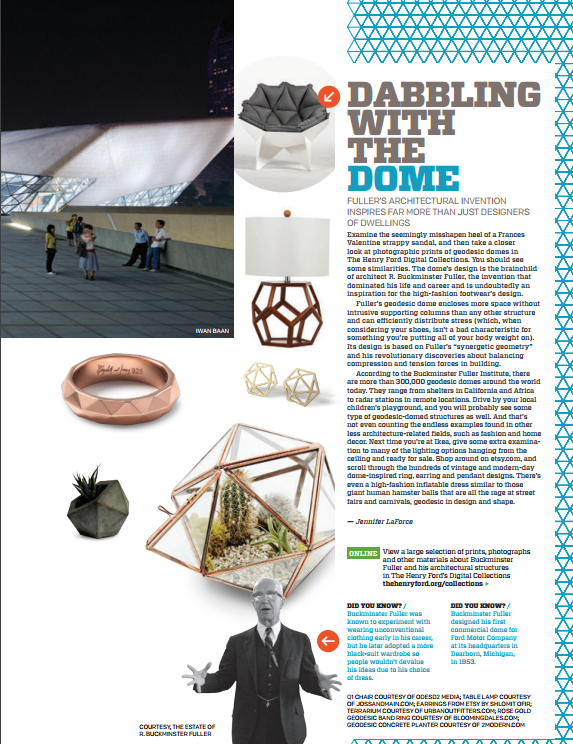 The Dymaxion House: A New Way of Living

How would you like to live in a round house built of aluminum, steel, and plastic, suspended on a mast like a giant umbrella, with built-in closets and shelves and a bathroom the size of an airplane toilet?

R. Buckminster Fuller thought this house, which he called the Dymaxion House, was just what the American public wanted. Fuller, an engineer, philosopher and innovative designer, conceived the house in 1927 and partnered with the Beech Aircraft Corporation in Wichita, Kansas, to produce prototypes in 1945. Although Fuller designed his house so that it could be mass-produced, only one was ever built and lived in. Continue Reading

To some people it’s a giant Hershey’s Kiss, while others sense a kinship with the Airstream travel trailer—both, it should be noted, recognized as icons. Even the more general touchstones—retro-futuristic spacecraft themes seem to hold sway here—tie into something powerfully elemental. Either way, the Dymaxion house has over the last decade assumed an iconic presence in Henry Ford Museum, a presence that delights and provokes a wide range of visitors. Continue Reading

Gauging the Condition of the Dymaxion House

At The Henry Ford, Conservation’s job is to maintain artifacts as close to original condition as possible while also ensuring access. The Dymaxion House is a fairly fragile aluminum structure, and a very popular exhibit, which makes preservation a little bit of a challenge.

Last year we did some rather major surgery on the Dymaxion House. We opened up the floor and patched all 96 aluminum floor beams to reinforce them where many had developed cracks.

As I explained in past blog posts, linked below, the damages were found primarily on the heavy-traffic side of the house, where our guests walk through. The repair job in 2012 took two months of hard work.

After all that effort, how do we ensure that this kind of damage won’t progress?

This year we are setting up some cool monitoring devices that will help us understand the house better.

All metal structures move. We want to figure out how our beams are moving, and whether the structure can continue to withstand the forces we apply to it.

Under the guidance of our own engineer, Richard Jeryan, who is retired from Ford Motor Company, and with the generous assistance of Ford Senior Chassis Test Engineer Dave Friske and two skilled technicians, Instrumentation Expert Walter Milewsky and Fastener Lab Technician Richard Talbott, we are installing stress and strain gauges along with crack detection and propagation gauges.

These gauges are the kind of very precise instrument used by engineers to find out how structures perform. They are used to test automobile parts (even ones as small as bolts) during design, and are also used on buildings and bridges.

Strain gauges are used to measure the amount of deformation (strain) when a building is loaded. Put another way, stress is a measurement of the load on a material, strain is a measure of the change in the shape of the object that is undergoing stress. We will be recording a baseline stress on the beams with the house empty of people and collecting our strain data on a busy week in the museum (like the Fouth of July!).

We also measured the deflection of the structural wire “cage” using a fancy laser-level and we recorded the data. This will enable us to compare yearly readings during our annual inspection to determine how the cage may be moving.

This is science and technology – working for preservation.

A checkup turns into surgery - repairing the Dymaxion House

A planned two-week checkup inspection of the iconic house of the future - Buckminster Fuller's Dymaxion House - turned into a two-month long “surgery” to repair extensive fatigue cracking of the thin aluminum beams that form the deck of the house. The cracks were visible from the underside, which is only accessible by sliding on your back on the museum's teak floor in about 18 inches of workspace.

Thorough inspection indicated that the damage was happening only in areas where the public walks. There were no cracks in the living room, which has never been accessible to visitors.

The cracks were developing due to the flexing of metal at the sharp edge of L-shaped brackets supporting the beams. Remember, there was no precedent for the use of aluminum in this architectural application, so we guess that Bucky was never aware he had allowed this fundamental design flaw. The house was a prototype in process - so it's understandable.

Our first look at the problem set off a flurry of activity to plan for repair. Fortunately, we had most of the expertise and labor required right on staff. Tim Brewer was there every step of the way when we put the house together the first time in Oct 2001; he knows every bolt and cable of the complicated dwelling machine.

Our dedicated volunteer Richard Jeryan, a retired engineer from Ford Motor Company, knew the best local firm to jump in and manufacture repair patches for us. Metro Technologies, located in Troy, Mich., made and helped install the necessary patches using high-tech adhesive and large rivets.

Most of the conservation department had a role as well. Some of our part-time staff - notably Fran McCans and Jill Maki - put in many extra hours to see this fascinating project through in good time.

Just getting at the problem required the removal of hundreds of fasteners – the stainless steel bolts, wood screws and aluminum rivets that hold the whole house together. Removing all those rivets while working in such tight spaces was challenging.

We lifted and moved the closet “pods” to open up more of the floor.  We shored the structure with lumber and removed the offending brackets. We pounded-out the floor-boards to access the bolts that retained the brackets.

Then we drill-out the ends of the cracks to arrest their progress in preparation for the addition of thicker aluminum patches custom-fit to the tapered U-shaped profile of the beams.

Two Metro Tech guys came in to apply the patches. Then we closed the first half and repeated the whole process for the second half of the deck.

Meanwhile, we worked with staff carpenters to make a new “over-floor” of plywood to install under the carpet.  This serves to spread the load of visitors’ foot-falls, reducing that flexing stress that causes fatigue in metals.

After reassembly and the carpet is relaid, the change will go unnoticed by most visitors.

Those of us familiar with the house can feel a distinct difference: it feels much more solid. Bucky meant for the house to hang from the mast.  He described the deck as “pneumatic” in some publications…but he had no idea that his prototype would become one of Henry Ford Museum’s most loved exhibits one day, with hundreds of thousands of visitors walking through it every year.

We think our work has preserved this house for another couple generations at least.  Only time will tell.

“You must be this small to enter.” How many times do you hear that in the workplace?

This week, our historic operating machinery specialist, Tim Brewer, and I have been squeezing between tie-down cables and sliding around underneath R. Buckminster Fuller's "house of the future," the Dymaxion House. We were part of the original team that restored this unique prototype and built it inside Henry Ford Museum.

Now, for the first time since it opened in October 2001, we have closed the house to the public; this shutdown will be for as brief a time as possible - we promise! - but it is essential to ensure the long-term preservation of the structure. (In the meantime, you can still view the exhibit and the exterior of the house from the platform.)

So what exactly is happening to the Dymaxion House during this time?

This extraordinary structure really does hang from the mast, with a cabled hoop (“cage”) system that the exterior wall “skin” floats on. We are using laser-levels to assess the relative movement of components in the cage system.

In addition, the flooring system (or deck) is made of hollow aluminum “beams,” with plywood attached with clip strips of bent aluminum. Right now we are determining the extent of wear on the deck  after 10 years of relatively trouble-free service.

As expected, we are finding more deterioration in the flooring path where visitors walk through the artifact, and we’ll be working hard over the next little while to repair any damages so our favorite house can delight the public for years to come. More details to come in a future post!

Senior Conservator Clara Deck has been a conservator at The Henry Ford for 20 years. Preserving the material integrity of the objects is her job - but making them look great is icing on the cake.

Learning about "the house of the future"

This week, we marked 10 years since R. Buckminster Fuller's Dymaxion House has been on exhibit in Henry Ford Museum!

This prefabricated house was reconstructed mostly from the parts salvaged from the only two Dymaxion Houses ever made - one of which was inhabited by the Graham family of Wichita, Kansas.

Did you know that a family actually lived in a Dymaxion House? It's true - William Graham, an original investor in Fuller Houses Inc., purchased the two prototypes and lived in a hybridized version of it from 1948 until the 1970s.

Fast forward to present day (last week, actually), when we came across this tweet:

It turns out that Robby Simpson, a fifth-grade science teacher at Columbus Academy in Columbus, Ohio, and his school have been bringing students to The Henry Ford for the Great American Museum Experience (G.A.M.E.) program for years, and they always enjoyed the Dymaxion House exhibit. As it turns out, Ted Graham's daughter began attending Columbus Academy recently, and last week he offered to come talk to the fifth graders about his experience growing up in such a remarkable building before they made their trip to Dearborn to see the real thing.

Watch the video to hear some of the great things we learned from the visiting fifth graders, including: