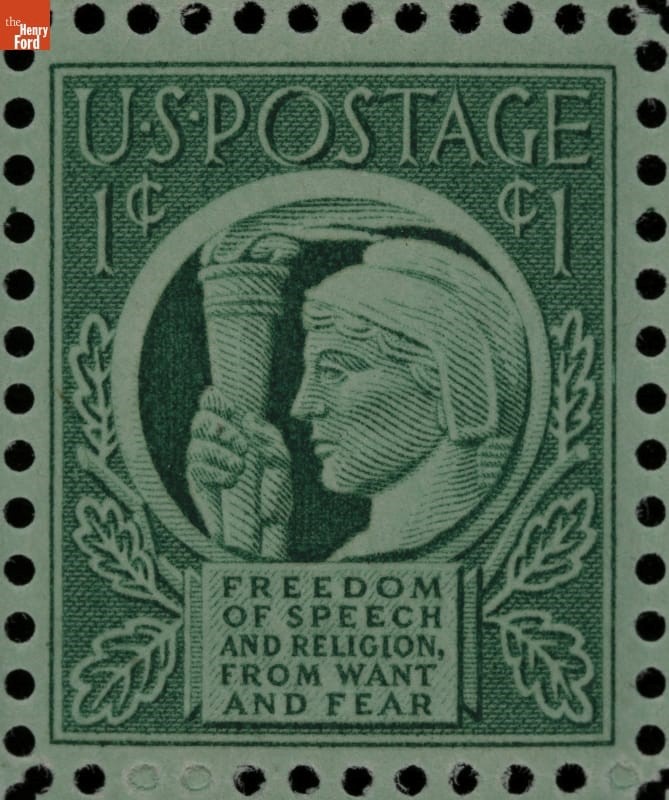 In January 1941, World War II raged in Europe—but the United States of America had not yet gotten involved.  Many citizens believed remaining uninvolved with the war was best. On January 6, 1941, President Franklin D. Roosevelt spoke to Congress, and laid out key principles he saw as at stake in this conflict. Among other arguments for American involvement, FDR’s “Four Freedoms” speech included this significant section, for which it is remembered:

In the future days, which we seek to make secure, we look forward to a world founded upon four essential human freedoms.

The first is freedom of speech and expression — everywhere in the world.

The second is freedom of every person to worship God in his own way — everywhere in the world.

The third is freedom from want — which, translated into world terms, means economic understandings which will secure to every nation a healthy peacetime life for its inhabitants - everywhere in the world.

The fourth is freedom from fear — which, translated into world terms, means a world-wide reduction of armaments to such a point and in such a thorough fashion that no nation will be in a position to commit an act of physical aggression against any neighbor — anywhere in the world.

These Four Freedoms have entered our collective conscience as universal ideals—perhaps always imperfectly manifested, but always worth working towards.

However, the Freedoms have also been interpreted differently, by different people and at different times. Four of our curators examined The Henry Ford’s collections through the lens of each of the Four Freedoms to create their own interpretations.

We hope these thought-starters inspire your own contemplative journey: What does freedom mean to you?