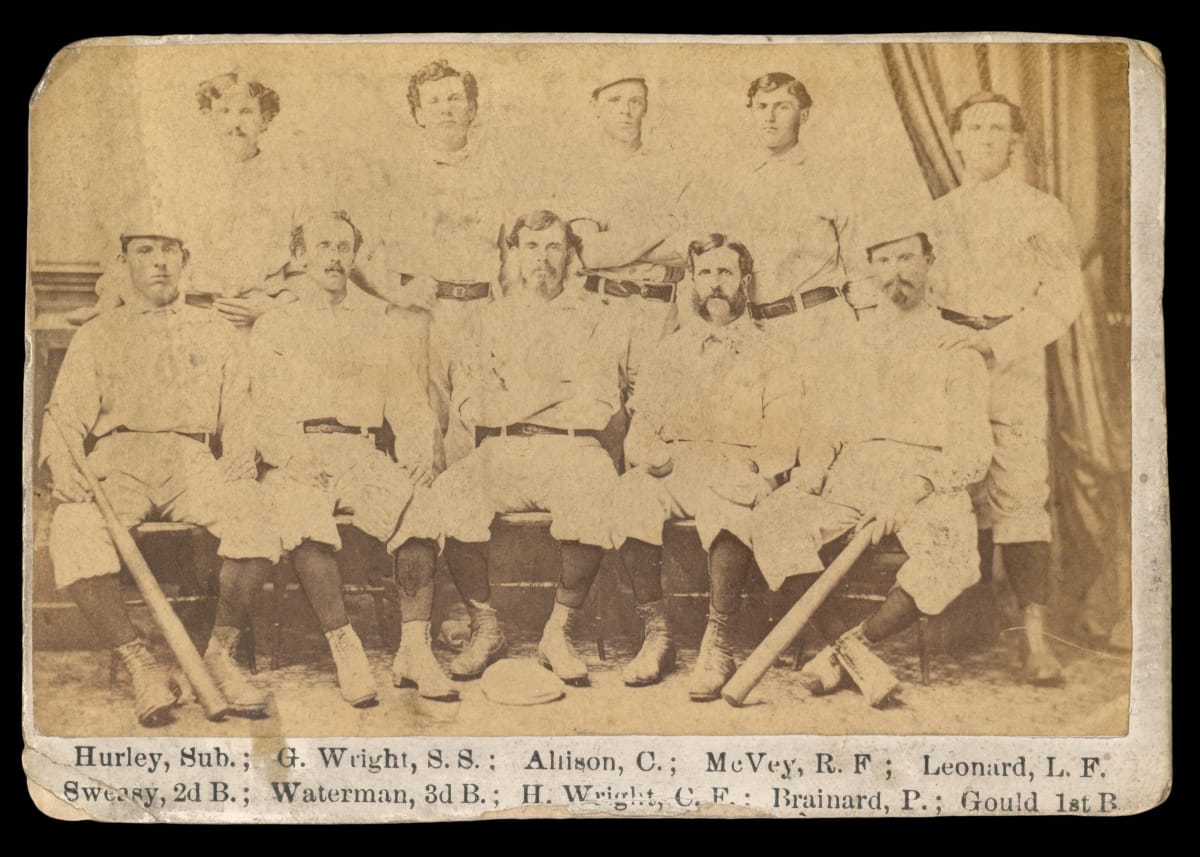 This Cincinnati Red Stockings trading card, issued by Peck & Snyder in 1869, is one of the earliest baseball cards. / THF94408

What does an old baseball card tell us about life in the United States? This baseball card was issued by Peck & Snyder, a New York sporting goods store. It features a team photo of the 1869 Cincinnati Red Stockings. This card is one of the earliest baseball cards, and in many ways, it marks the emergence of the modern game as a national pastime.

Since the 1840s, baseball had been evolving rapidly from a game for children to one for gentlemen. The grown-ups soon imposed structure and standardization on the largely improvisational kids’ game. Baseball clubs formed for recreation and exercise, and friendly competition between clubs was soon part of the mix. Following the end of the Civil War, that friendly competition became more intense. Strong rivalries developed between local baseball clubs; gradually, playing for sport was replaced by playing to win. Clubs began to recruit better players. They cast nets that extended well beyond their communities and quietly offered top players various enticements to play, including jobs and cash. The best ball players gained celebrity status and came to be known far and wide. Newspapers covered their exploits, fanning the flames of "baseball fever" across the country. The spread of railroads allowed clubs to play games farther away from home.

The stage was set for the 1869 Cincinnati Red Stockings.

The Cincinnati Red Stockings are one of the legendary teams of baseball. Harry Wright, who played for several New York clubs before the Civil War, saw the business opportunity in baseball as a spectator sport. In 1869, Wright built a club around a nucleus of himself, his brother George, and several other strong players from teams from the eastern United States. Backed by Cincinnati investors, the Red Stockings became the first openly professional baseball team. Taking advantage of the opening of the transcontinental railroad in 1869, the Red Stockings embarked on a coast-to-coast national tour, covering 12,000 miles and playing before over 200,000 spectators. They were unbeaten in more than 70 games over two seasons, finally losing to the Brooklyn Atlantics in June 1870.

The exploits of the Red Stockings did much to popularize baseball around the nation and demonstrated that professional baseball teams could be an economic success. Major League Baseball marks its start with the Red Stockings’ national tour of 1869. The team lasted only five years (1866–1871), but Harry and George Wright went on to form the Boston Red Stockings (which eventually became the Boston-Milwaukee-Atlanta Braves) and are members of the National Baseball Hall of Fame. 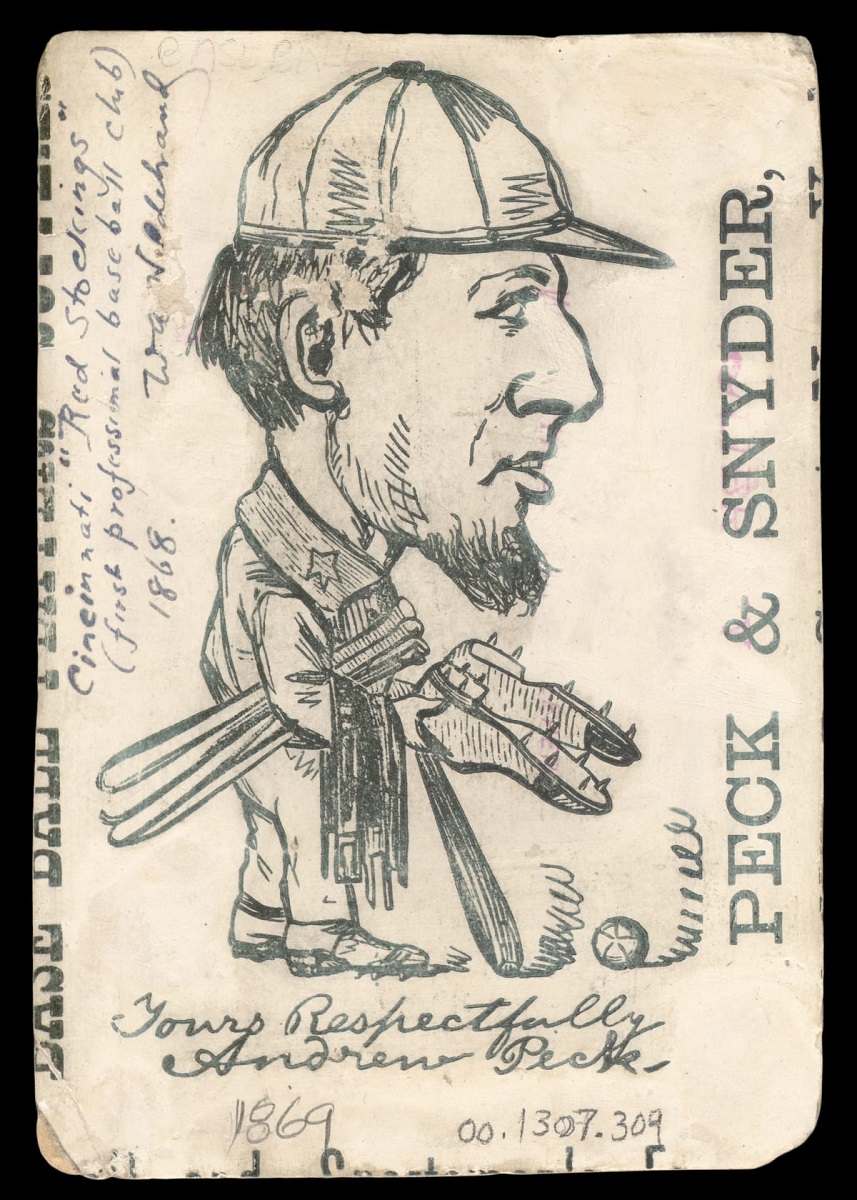 Peck & Snyder was Manhattan's first sporting goods store. Founded by Andrew Peck, who got his start in 1865 making baseballs, Peck & Snyder is credited with starting the first baseball card series when the store pasted advertisements on the back of team photographs, including the Cincinnati Red Stockings, the Chicago White Stockings, the Boston Lowells, the Brooklyn Atlantics, the New York Mutuals, and the Philadelphia Athletics. Along with brewers, hotel keepers, and transit companies, sporting goods makers knew that baseball was good for business.

In this card, we can see the emergence of baseball as a true national pastime—and as a business. Here was a New York store, creating a trade card with a Cincinnati team on it. The example now in the collections of The Henry Ford was important enough that it was framed—reflecting the celebrity status of the players it depicted and, perhaps, the rooting interests of its owner.


Jim McCabe is former Curator and Collections Manager at The Henry Ford. This post originally ran in May 2008 as part of our “Pic of the Month” series. It was updated for the blog by Saige Jedele, Associate Curator, Digital Content, at The Henry Ford.