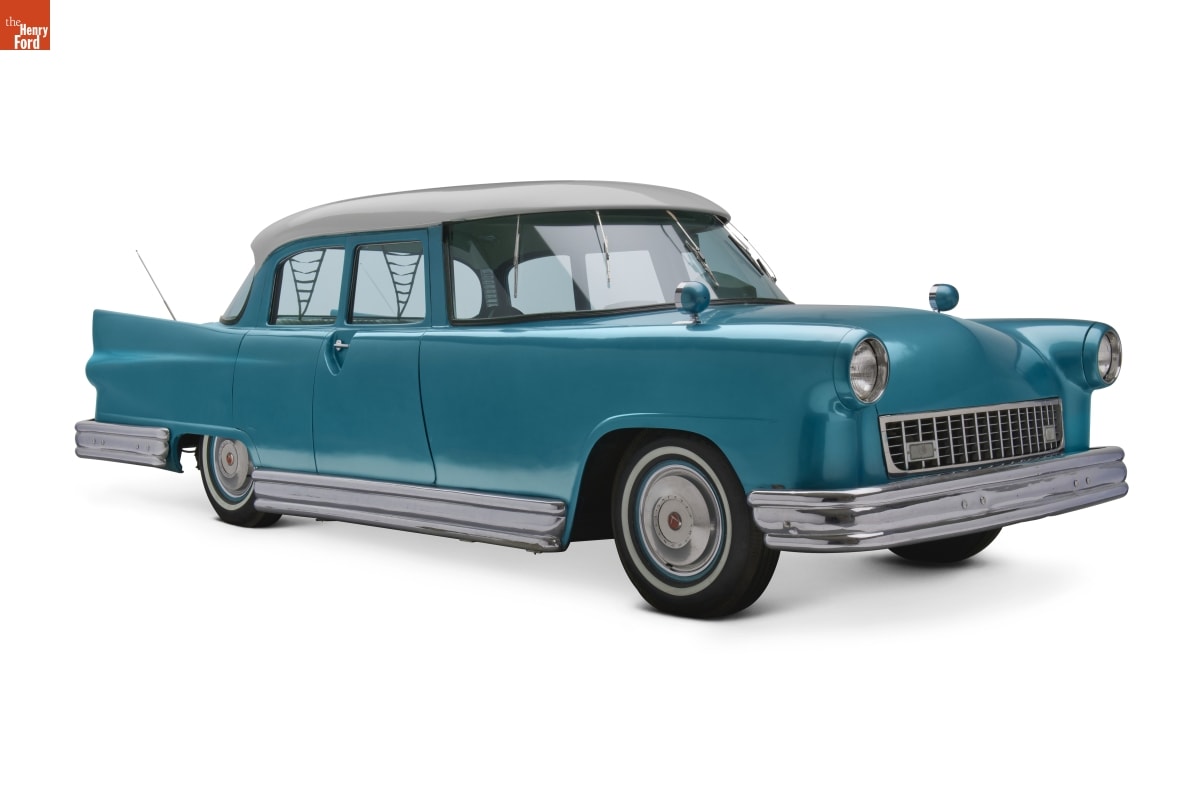 We have our share of unusual-looking automobiles in Henry Ford Museum. The Tucker, the Belly Tank Lakester and the Comuta-Car all turn heads. But there’s only one that looks like it just flew in from the Spacely Space Sprockets factory: the 1957 Cornell-Liberty Safety Car. Behind that endearingly odd exterior, though, was a serious five-year effort to save lives by making American cars safer.

Over the first half of the 20th century, many automakers focused their efforts on making cars more reliable, more comfortable and more powerful. Safety was a lesser concern. There were exceptions – laminated windshield glass, which didn’t break into sharp pieces, was in use by the late 1920s – but conventional wisdom held that safety didn’t sell. Customers wanted their cars to be faster, not safer.

By the 1950s, that attitude began to change. Cars were certainly faster by then, but they also had roads to accommodate the higher speeds. State-built turnpikes and federally-funded Interstates had drivers zipping along at 75 miles per hour, and the booming postwar economy put more Americans behind the wheel each year. It’s little wonder that more drivers traveling at faster speeds led to a rise in accidents. By 1950, some 35,000 people were dying in auto accidents each year. Faculty members at Cornell University and officials at Liberty Mutual insurance took notice. In 1951, the two institutions teamed up to research a simple question: What causes injuries in automobile accidents? 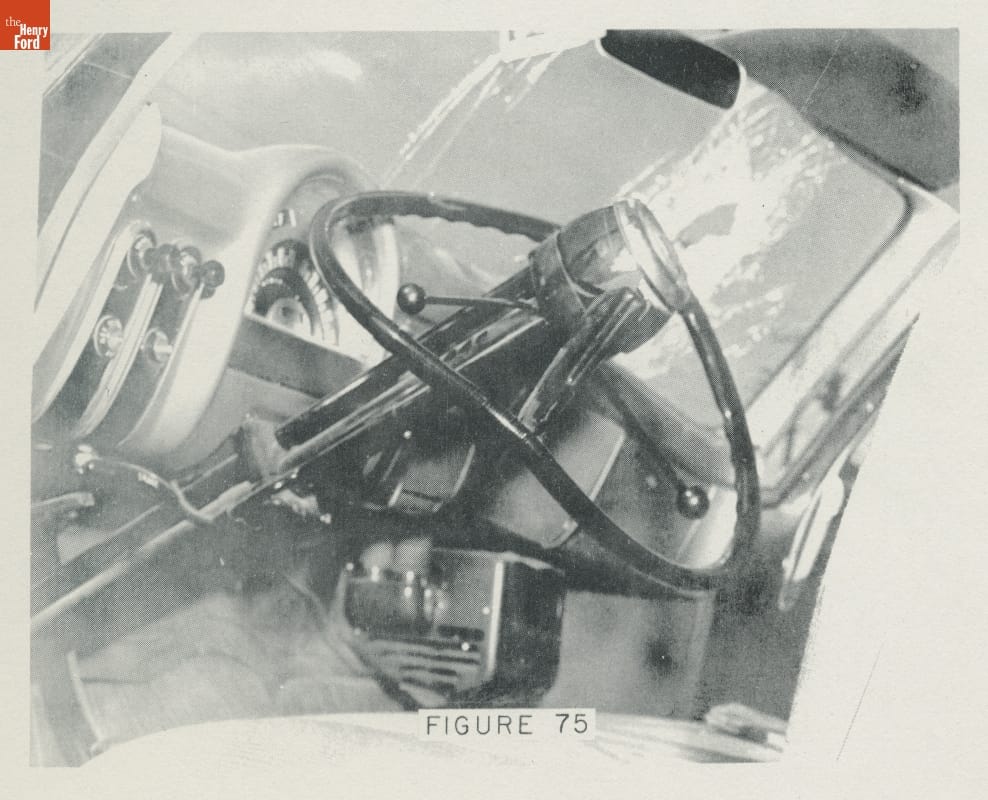 Steering wheels and sharp edges could be lethal. (THF103543)

America’s highways became a laboratory, and police officers and emergency room doctors became research assistants. By carefully studying accident reports and medical records from around the country, the Cornell-Liberty team made several key discoveries. Car doors were a weak spot. Too often in an accident, a door was smashed open and one or more of the occupants was thrown from the vehicle. Furthermore, the team discovered that someone thrown from a car was more than twice as likely to receive serious injury. They learned that back seat passengers were three times safer than those in the front during a crash.

Researchers determined that the head was the most frequently injured part of the body, and that one in ten victims received a facial disfigurement. Contrary to popular belief at the time, the steering wheel provided no extra protection to the driver. Indeed, the wheel was often a cause of injury, being pushed into a driver’s chest during a crash. What’s more, control knobs, window frames and decorative ornaments often maimed accident victims. 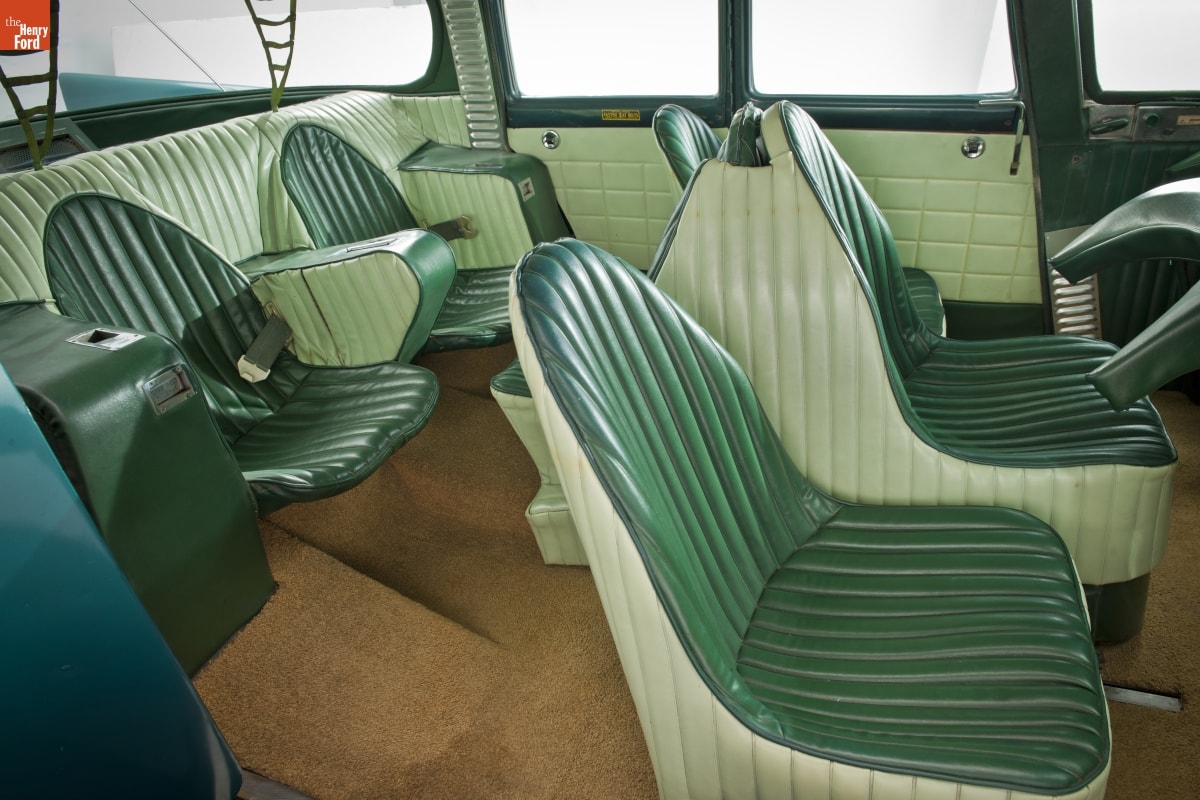 The Cornell-Liberty team put its findings into practice by building a concept car that reduced or eliminated many of these dangers. Working from a 1956 Ford Fairlane, the team produced a car incorporating more than 60 protective features. In effect, they thought of their car like a giant egg carton designed to keep its fragile contents secure. The safety car’s accordion-style doors latched in three places, keeping them closed in a crash. Its bumper wrapped completely around the vehicle, protecting in low-speed accidents. Seat belts were prominent. Head restraints prevented whiplash injuries. The steering wheel and column were replaced by a pair of control handles. The dashboard, like other interior surfaces, was padded. Door handles were recessed. Unnecessary badges and baubles were removed. 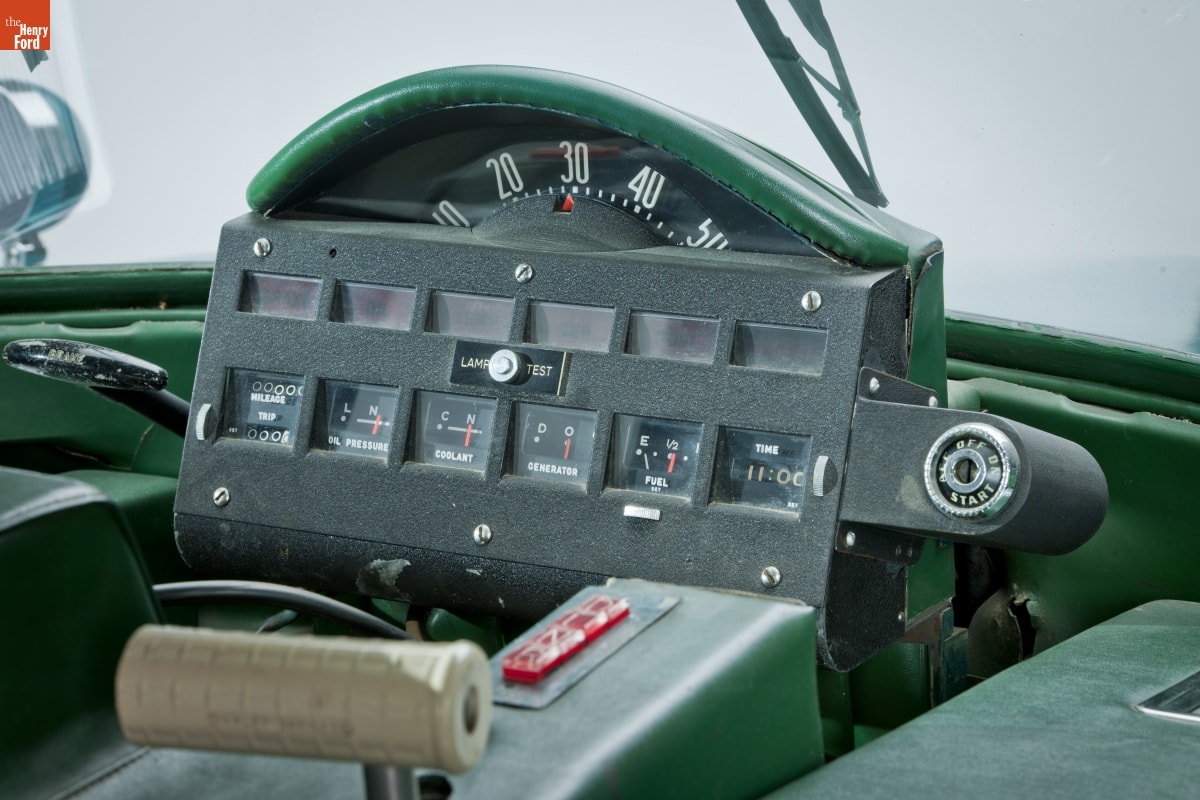 The dashboard is uncluttered and the gauges are easy to read. (THF90865)

The best way to survive an accident is to avoid one, so the Cornell-Liberty team took driver visibility and distraction into account. The panoramic windshield – cleaned by five wipers – gave the driver an unobstructed view (as did the driver’s position, in the middle of the car rather than on the left side). Controls were kept to a minimum, and the oversized speedometer dial and gauges were placed directly below the driver’s sightline. The fuel gauge even had a “low level” indicator – something of a novelty in 1957. Indeed, the Cornell-Liberty team seemed to have anticipated every possible distraction; contemporary press reports noted that the offset front seats discouraged “necking while driving.”

Neither Cornell nor Liberty Mutual had any plans to manufacture or sell safety cars, of course. Instead, they hoped that their project would bring more attention to crash protection from the public and – more to the point – from automakers. A decade later, after some additional prodding from Ralph Nader and new government regulations, safety was an established priority in Detroit. And while the car you drive today may not have five windshield wipers or handlebar steering, it’s certainly got a bit of the 1957 Liberty-Cornell Safety Car inside.