Celebrating the Jewish Holiday of Hanukkah 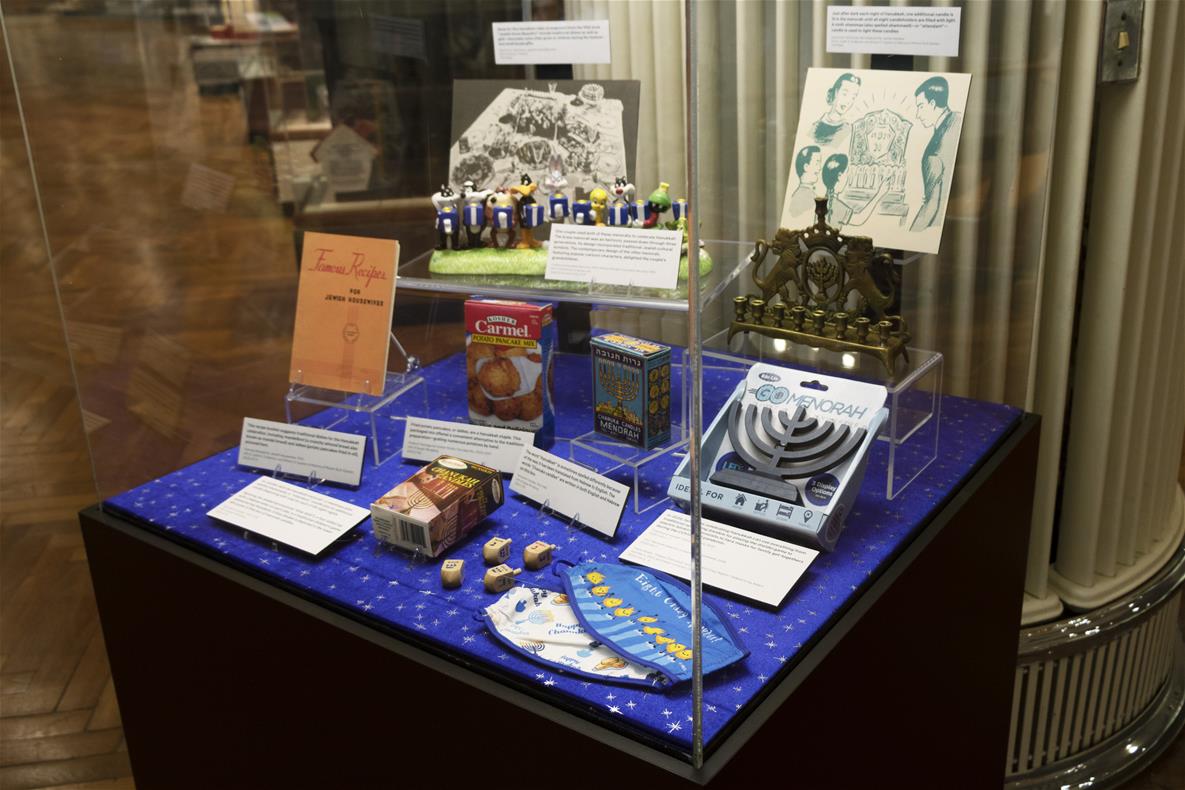 Legends and stories surround the origin of Hanukkah, whose name means “dedication” in Hebrew. Hanukkah celebrates the 165 B.C.E. victory over the Jews’ Syrian-Greek oppressors, who had seized the Holy Temple in Jerusalem. According to Rabbinic tradition, the Jewish victors—a rebel army known as the Maccabees—set out to purify and rededicate the defiled temple but could only find one day’s worth of ritual oil. Miraculously, the small amount of purifying oil burned in the temple’s lamp stand, or menorah, for eight days.

For centuries, Hanukkah was a modest occasion, a minor holiday. Jewish law and custom only required the lighting of candles for eight nights, with one candle to be used as the shamash (“guard” or “servant” in Hebrew) to light the others. The lighted candles were to be kept by a window where they could be seen by passers-by. In Eastern Europe, the celebration included eating latkes (potato pancakes), distributing small amounts of Hanukkah gelt (coins) to children, playing games with a dreidel (a spinning top), and playing cards.

In America, Hanukkah continued to be celebrated in this modest way, if at all. After the Civil War—as the American Christmas began to transform itself into a holiday of decorations, parties, shopping, and gift-giving—American Jews were drawn to the bright lights and excitement of that holiday.

Leading rabbis worried that, compared to the increasingly popular celebration of Christmas, Hanukkah lacked “romance” and allure. The campaign to revive and enhance Hanukkah began in the 1880s. Families were encouraged to create a festive atmosphere at home, to have Hanukkah parties, and to exchange gifts. By the 1920s, Hanukkah had begun to assert itself as a major Jewish domestic holiday.

Hanukkah reached its full flowering in the child-centered culture of post-World War II America. Beginning in the 1950s, not only did more families celebrate the holiday, the celebrations themselves became more elaborate. Jewish organizations encouraged this with books and manuals to help families make the holiday more appealing (and discourage the celebration of Christmas). Families might exchange gifts for eight nights, light several menorahs, give parties, prepare special foods, and decorate their houses.

Today, the eight-night Hanukkah holiday still usually involves menorah-lighting, latke-eating, and dreidel-spinning, but Jewish celebrants can choose from a wide variety of items and ways to celebrate the traditions and rituals. 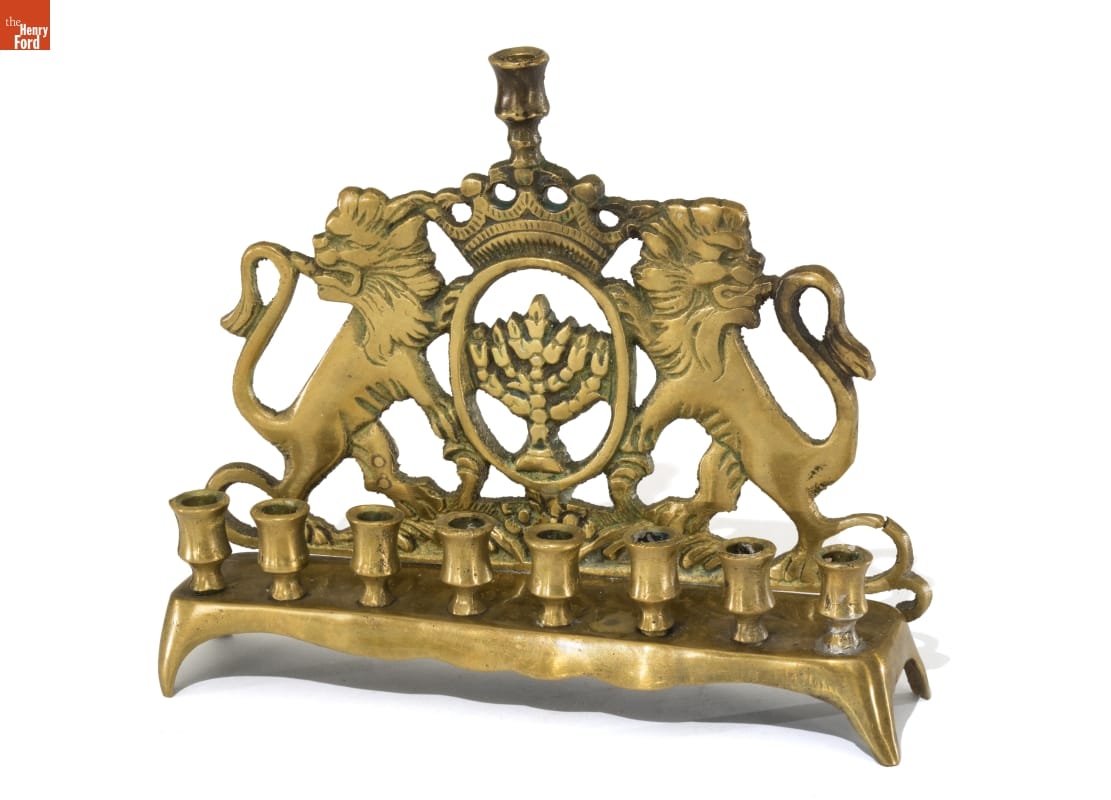 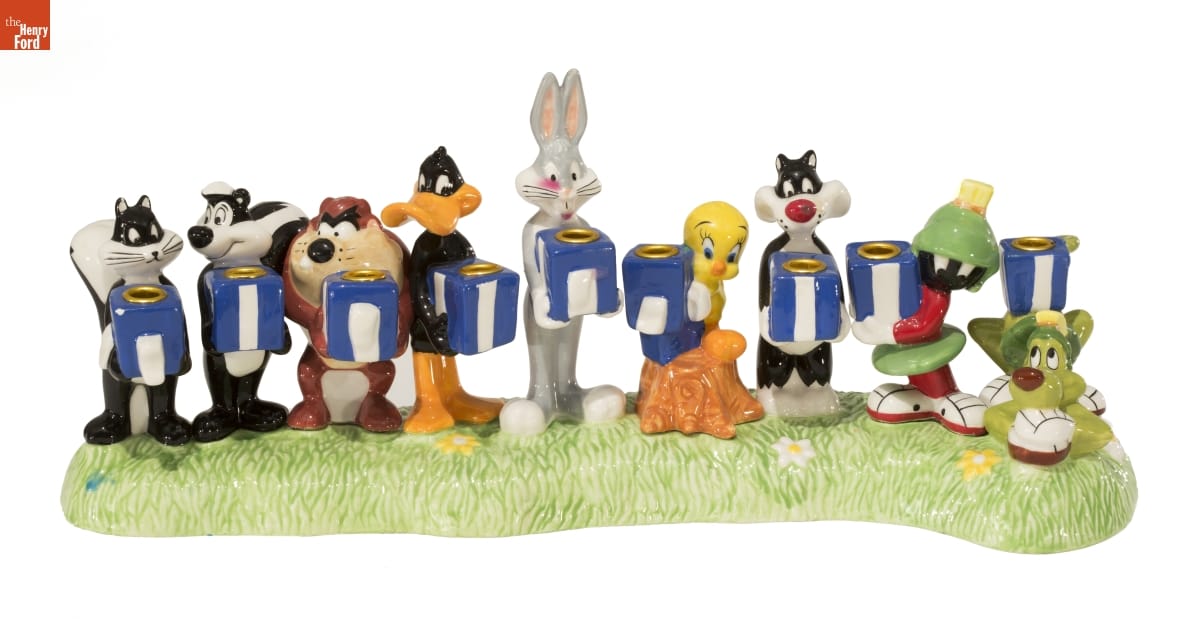 One couple used both of these menorahs to celebrate Hanukkah. The brass menorah was an heirloom, passed down through three generations. Its design incorporates traditional Jewish cultural symbols. The contemporary design of the other menorah, featuring popular cartoon characters, delighted the couple’s grandchildren. Traditional Hanukkah Menorah, 1900-1920 and Modern Hanukkah Menorah, 1998 / 2005.121.62 and 2005.121.61 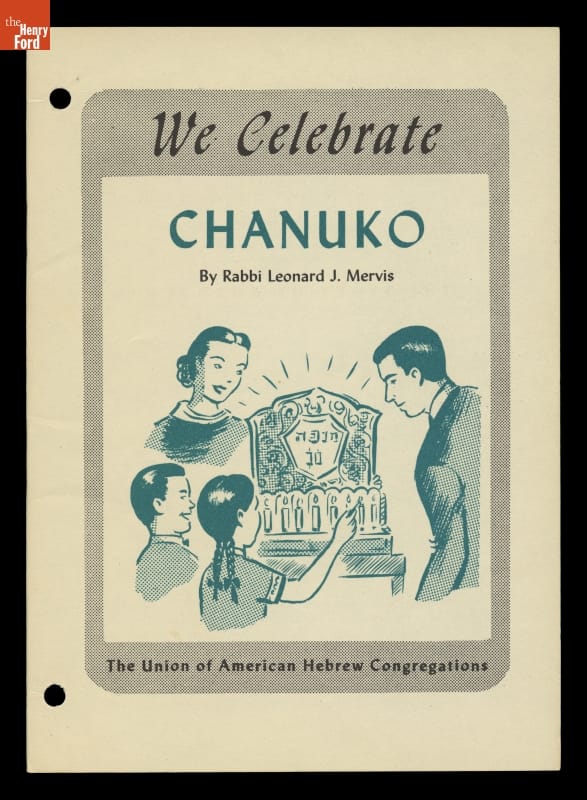 Just after dark each night of Hanukkah, one additional candle is lit in the menorah until all eight candleholders are filled with light. A ninth shammas (also spelled shammash)—or “attendant”—candle is used to light these candles. Detail from 1953 book, We Celebrate the Jewish Holidays. / THF111666 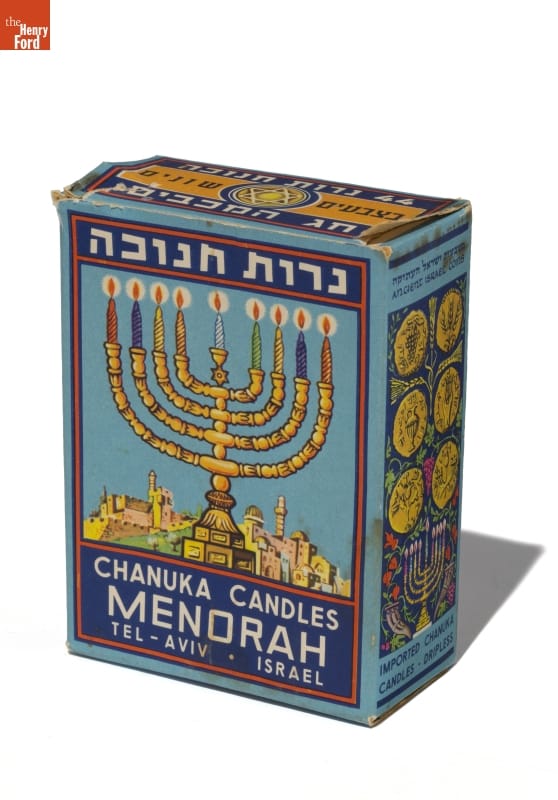 The alternate and more traditional spelling of the holiday starts with the two letters “Ch,” which is an English transliteration of the eighth letter in the Hebrew alphabet. The words “Chanuka candles” are written in both English and Hebrew on this box. Hanukkah Candles, 1946-1980 / 2010.2.178 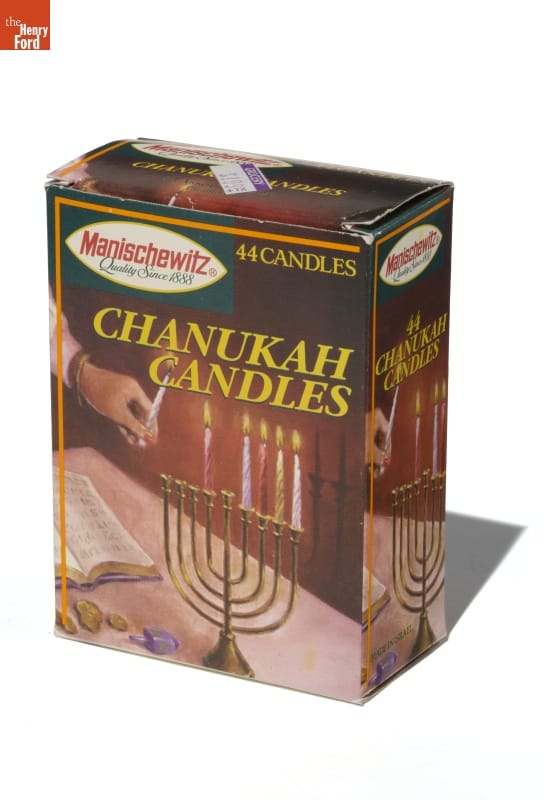 Forty-four candles light the Hanukkah menorah—a shammas (also spelled shammash), or “attendant,” candle plus an additional candle (beginning with one) for each of the eight nights. The candles are inserted from right to left (the direction in which Hebrew is read) but kindled from left to right. Spinning the dreidel (pronounced “dray’-duhl”), a four-sided top with a Hebrew letter on each side, is a traditional children’s game played during Hanukkah. A blue dreidel is depicted in the lower left corner of this box of menorah candles. Hanukkah Candles, 1990-2010 / 2010.2.176 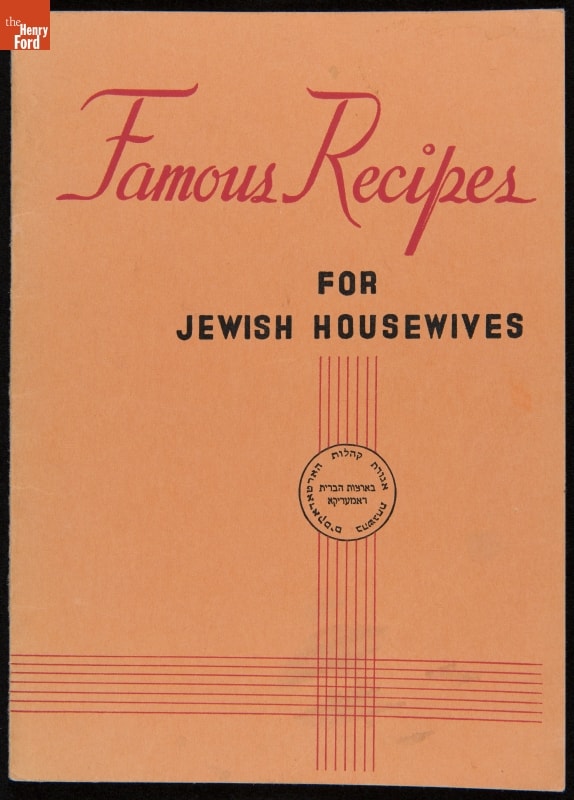 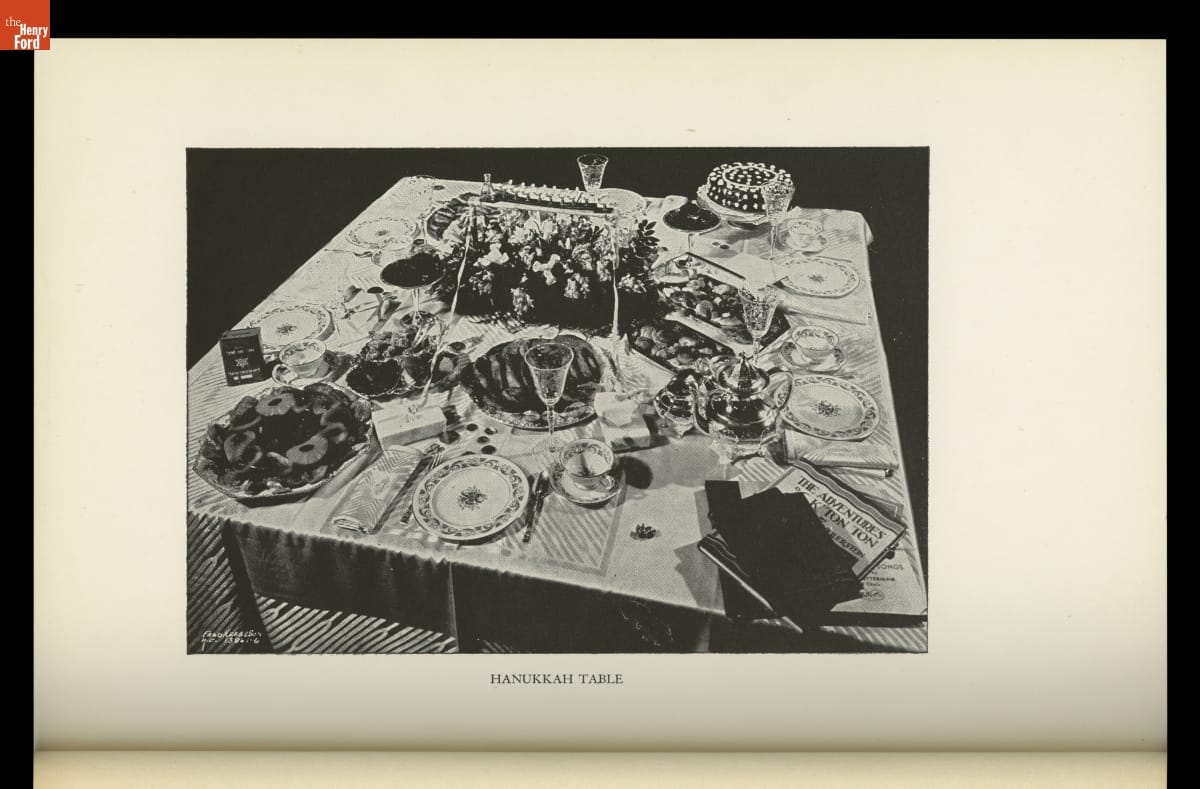 Also on exhibit, but not pictured here:

Donna R. Braden is Senior Curator and Curator of Public Life at The Henry Ford. She enjoys explaining the Hanukkah traditions that she grew up with to others. Thanks to authors Saige Jedele and Judith Endelman for their previous blog posts about the history and traditions of Hanukkah, from which this blog post heavily draws, and to Saige for writing the initial exhibit labels for many of these objects.