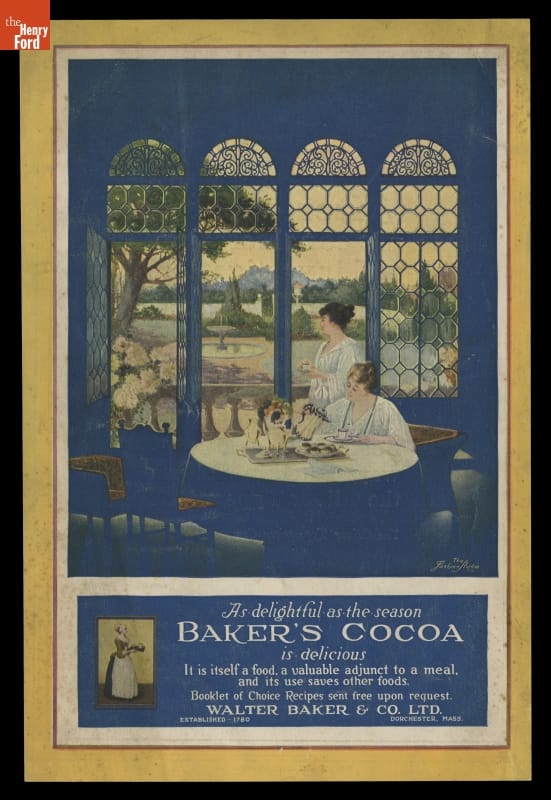 The copy in this ad references Americans’ voluntary reduction of food consumption during World War I. THF131084

Hot chocolate just might be the perfect drink. The scientific name for the chocolate tree—Theobroma cacao—means “food for the gods.” And for good reason. When mixed with hot liquid and sugar, chocolate has been known to stimulate, to calm, to improve digestion, to enhance the mood, to combat stress, and to promote long life.  All that, and it tastes great and smells divine!

Although a hot beverage using chocolate had originated in the New World with the ancient Aztecs—who consumed it during sacred ceremonies—it came to the American colonies by way of Europe. By that time, it was already a sweet creamy drink, popular with wealthy aristocrats who could afford the expensive imported sugar and spices that went into making it.  In early America, it became a popular substitute to tea after the colonists rejected British tea with its high import taxes (the response that brought on the Boston Tea Party). 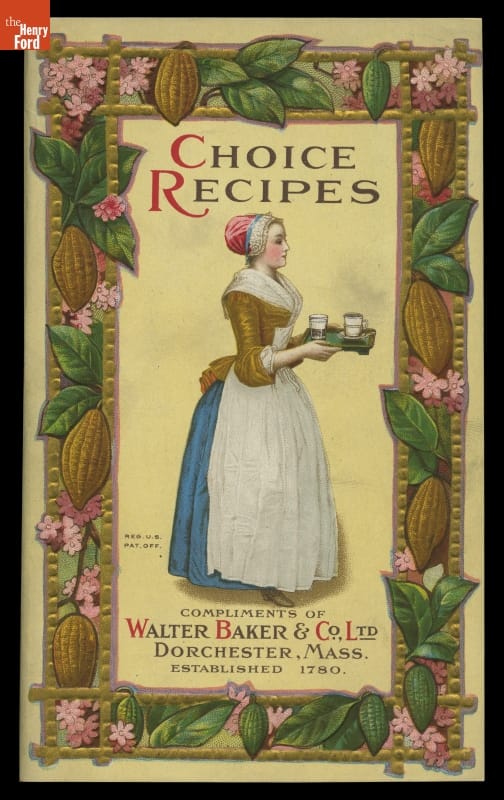 The famous image on this recipe booklet cover, adopted by the company in 1883, was based upon an earlier painting of a waitress in a Viennese chocolate shop. THF131089

Small-scale chocolate mills sprang up in early America to process cacao beans into chocolate, making the price more affordable than importing the chocolate either from Europe or the West Indies.  In 1765, Dr. James Baker, an American physician, and immigrant Irishman John Hannon converted an old gunpowder mill in Dorchester, Massachusetts, into a mill for manufacturing chocolate. The hardened “cakes” of chocolate that the firm produced lent themselves well to the sweetened chocolate drink Americans loved. Baker’s Chocolate would go on to become an American empire.  Distinctive packaging and extensive newspaper advertising spread its popularity as far west as the 1849 California Gold Rush.

Through the late 19th century, Baker’s Chocolate was arguably the largest chocolate manufactory in the United States. Its famous logo could be seen everywhere—on billboards, streetcar signs, grocery store placards, and recipe booklet covers.  The company thought it had it made.

Until Milton Hershey came along. 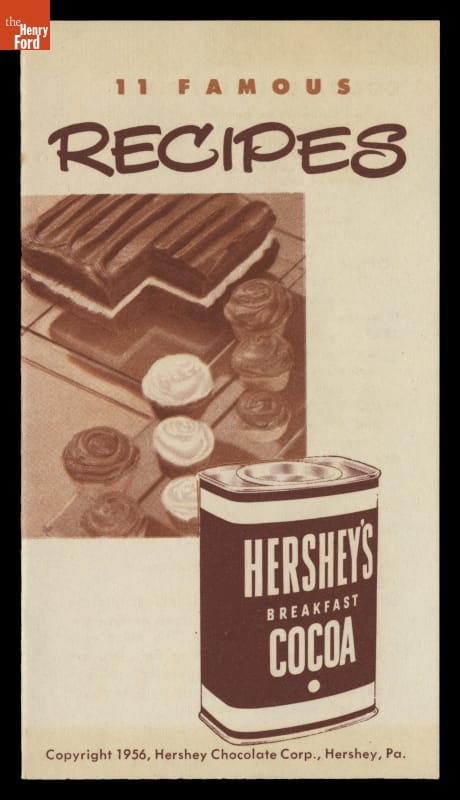 Hershey, a Pennsylvania Quaker, began his candy business producing caramels. At the 1893 World’s Columbian Exposition in Chicago, he became intrigued by a display of German chocolate-making machinery. He bought the machines and, after a few years of experimentation, came up with a smooth, creamy milk chocolate candy bar.  Soon he was mass-producing chocolate candy bars that, at five cents, virtually anyone could afford. Despite European critics who claimed that Hershey’s chocolate was inferior to the centuries-old chocolates produced in their own countries, Hershey’s acquired such a loyal customer base that many Americans thought Hershey’s chocolate was chocolate.

As a result of Milton Hershey’s innovations, Americans would soon favor eating chocolate over drinking it. But chocolate-drinking did not die out. It simply took on new forms and appealed to new audiences. 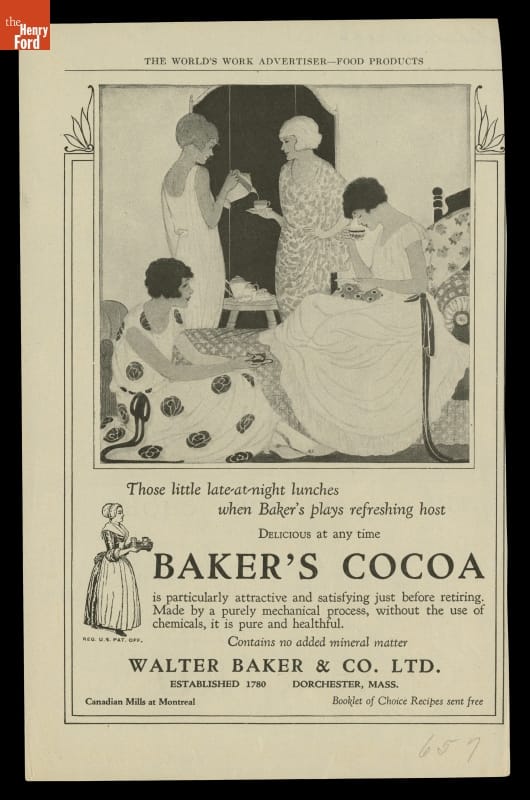 These young “flappers” are enjoying Baker’s Cocoa during a late-night sleepover party. THF131083

Cocoa powder (a processed component of chocolate)—easy to carry and prepare—became a popular field ration for soldiers during both the first and second World Wars.  Women emerged as major new consumers of chocolate beverages, for parties and get-togethers.  Hot cocoa was also considered a healthful, life-enhancing food for invalids. 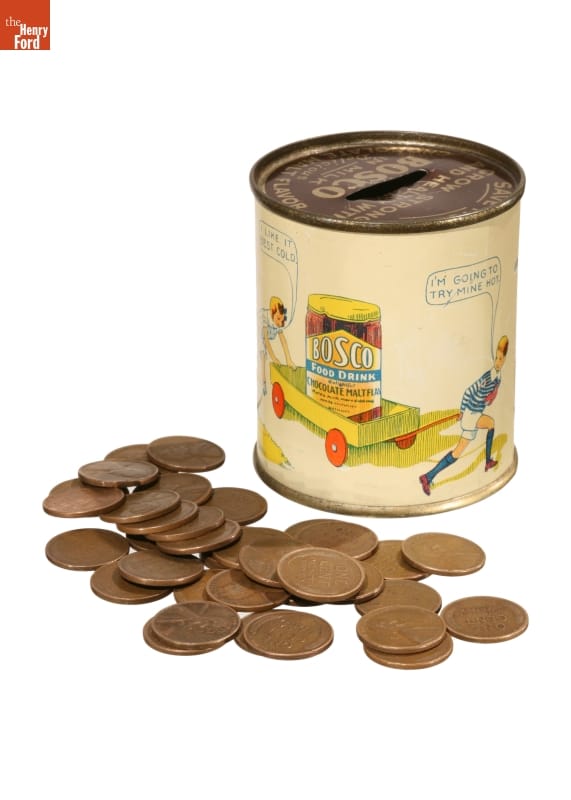 For the first time, despite warnings from critics about tooth decay, acne, and weight gain, chocolate drinks were promoted as a nutritional health food for children—a good way to get more milk into their diets while also giving them increased zest for life.  Bosco, a chocolate syrup first produced in 1928 in Towaco, New Jersey, was advertised as a healthful “milk amplifier” for children. 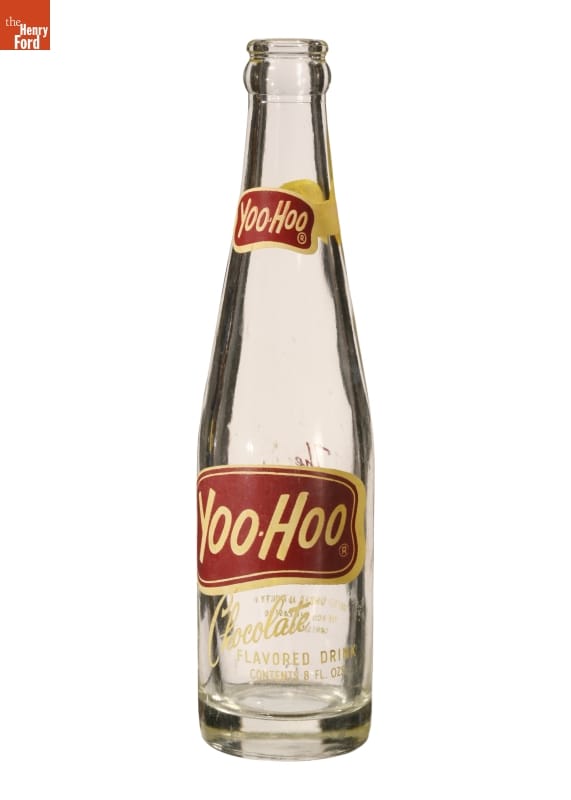 Yoo-Hoo Chocolate Flavored Beverage, also originating in New Jersey in the 1920s, was popular with and marketed to young people. 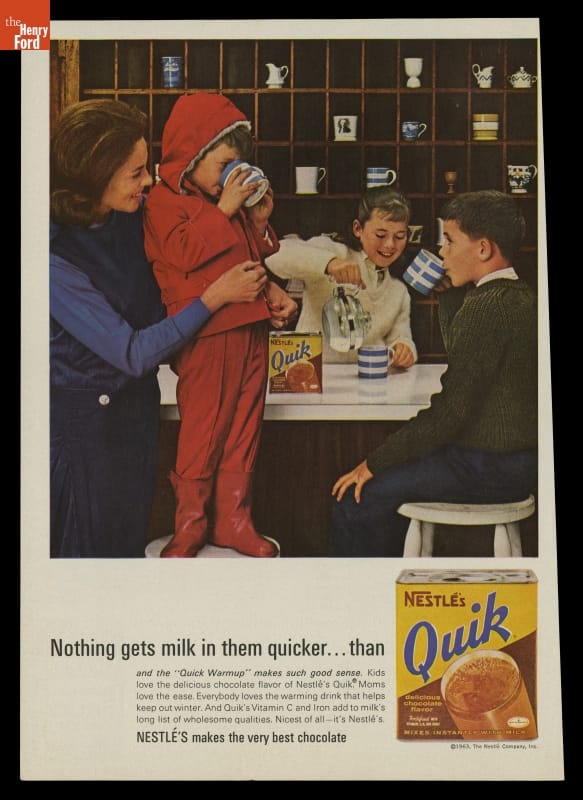 By the mid-20th century, chocolate beverages reflected Americans’ on-the-go lifestyle with the introduction of “instant” cocoa powder and chocolate-powdered flavoring mixes.  Nestle’s Quik, produced in the United States although the company originated in Switzerland, was advertised as “the only chocolate milk that makes itself!” 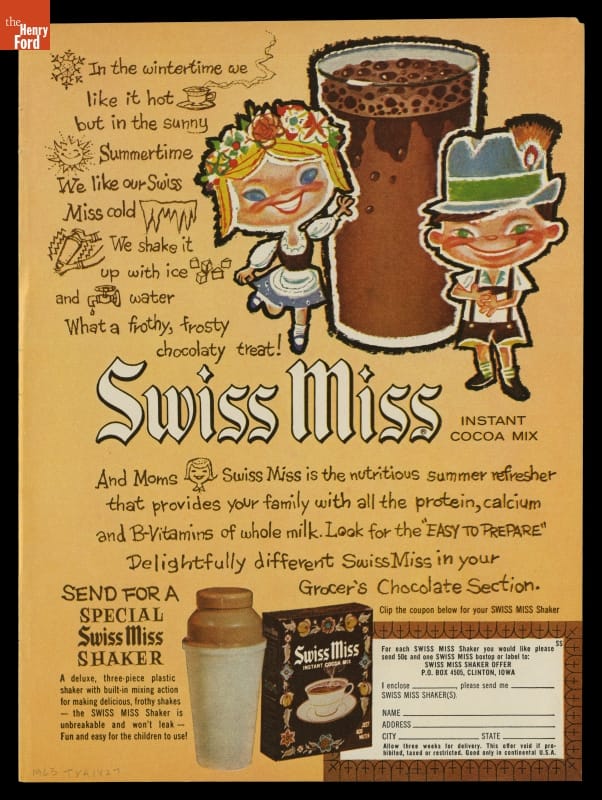 Swiss Miss Instant Cocoa Mix, whose name and packaging were intended to evoke chocolate’s “Old World” roots, became so popular as an easy-to-prepare airline beverage in the 1950s that it soon became available at grocery stores. 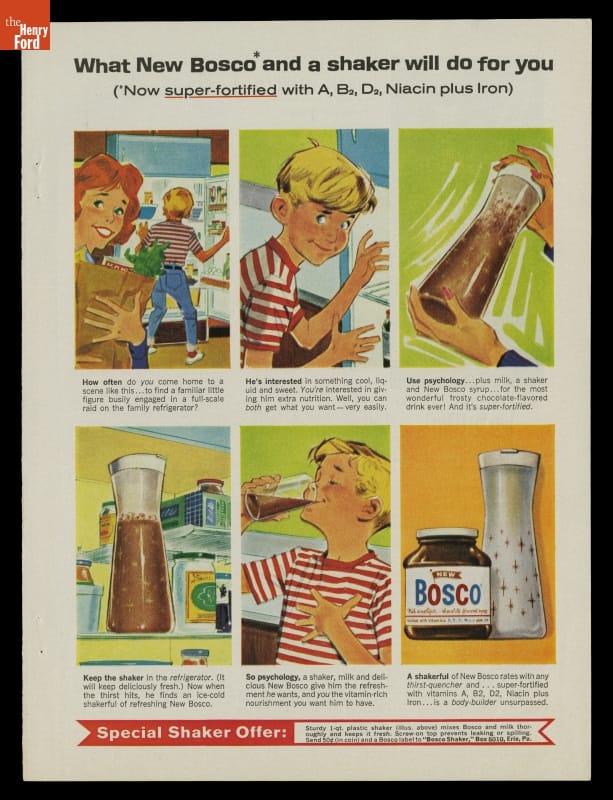 These and other “instant” chocolate drinks lent themselves perfectly to advertising through the new medium of television. What Baby Boomer does not remember the “I Love Bosco” jingle from the 1950s and early 1960s? And Quicky the bunny, famous for inhaling Nestle’s Quik at record speeds, debuted in commercials in 1973. At the same time that these commercials promoted chocolate beverages as fun and delicious for kids, they reminded Moms that these drinks were also healthful and nutritious. 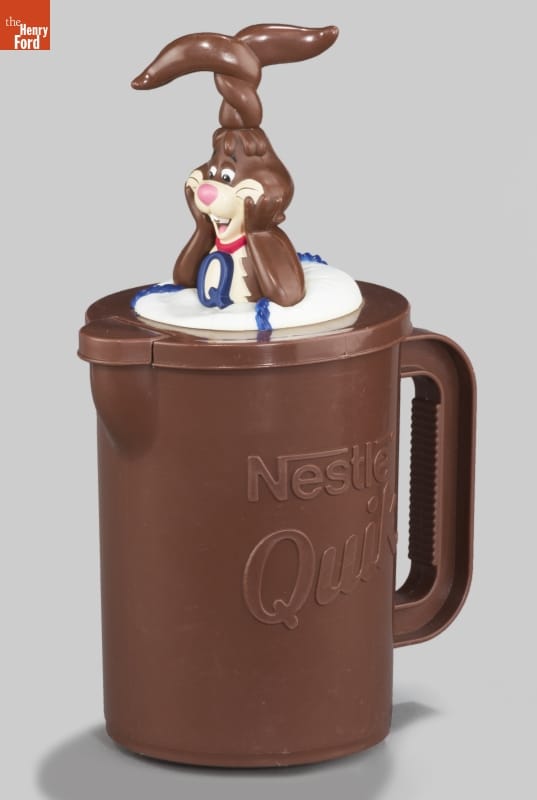 After centuries of preferring chocolate beverages that were increasingly easier, faster, and cheaper, Americans today are turning to a new appreciation for Old World and more traditional forms of chocolate and the beverages using this chocolate.  Maybe this is a permanent trend or maybe it’s just a temporary respite from our fast-paced lives.  Whatever it is, Milton Hershey was certainly on target when he declared: “Chocolate is a permanent thing.”