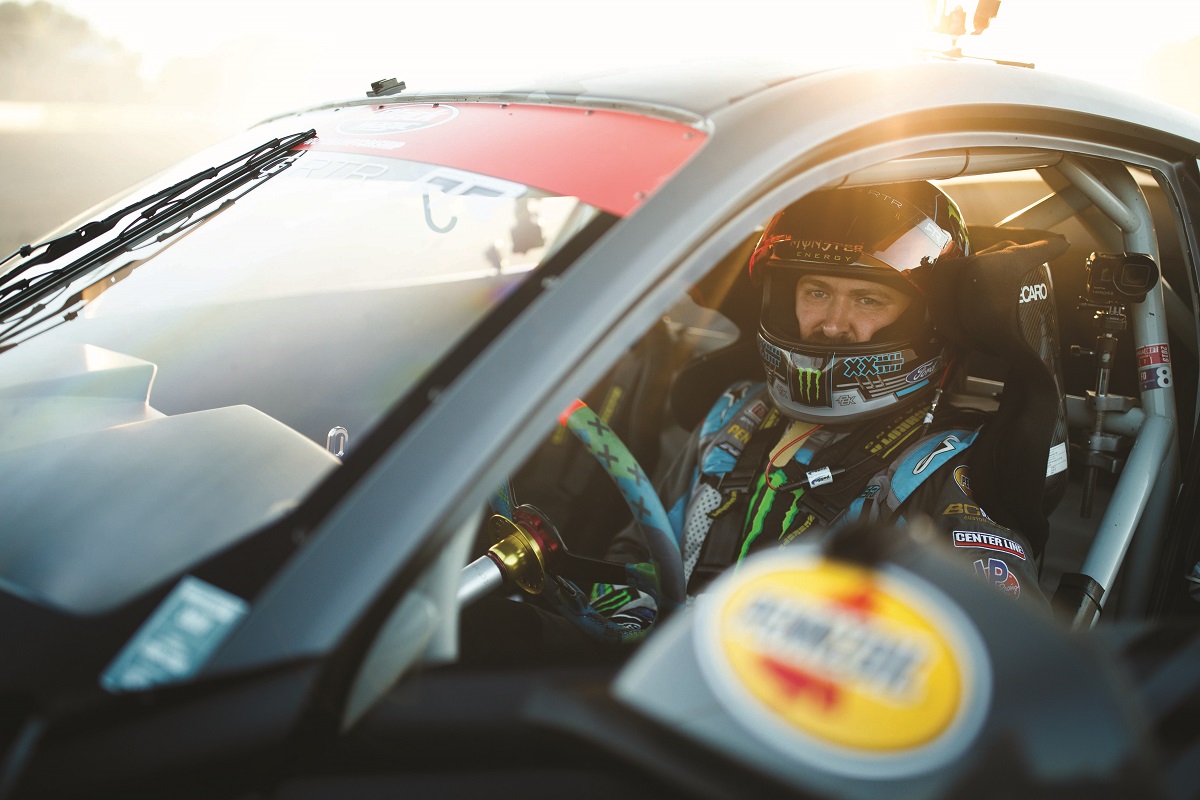 Drifting is one of the fastest growing forms of motorsports in the world. It is the sport of losing traction, a driving technique where a driver purposely oversteers and causes the rear tires (or sometimes all the tires) to lose grip on the road. A car is said to be drifting when the rear slip angle is greater than the front slip angle, and the front wheels are pointing in the opposite direction to the turn. Basically, the car is turning left, but the wheels are pointed right. What’s extreme here is that the driver is controlling these factors the entire time. Drifters don’t cause a car to drift and then try to straighten things out. They just over-counter so the car goes into another drift. That’s the whole point. 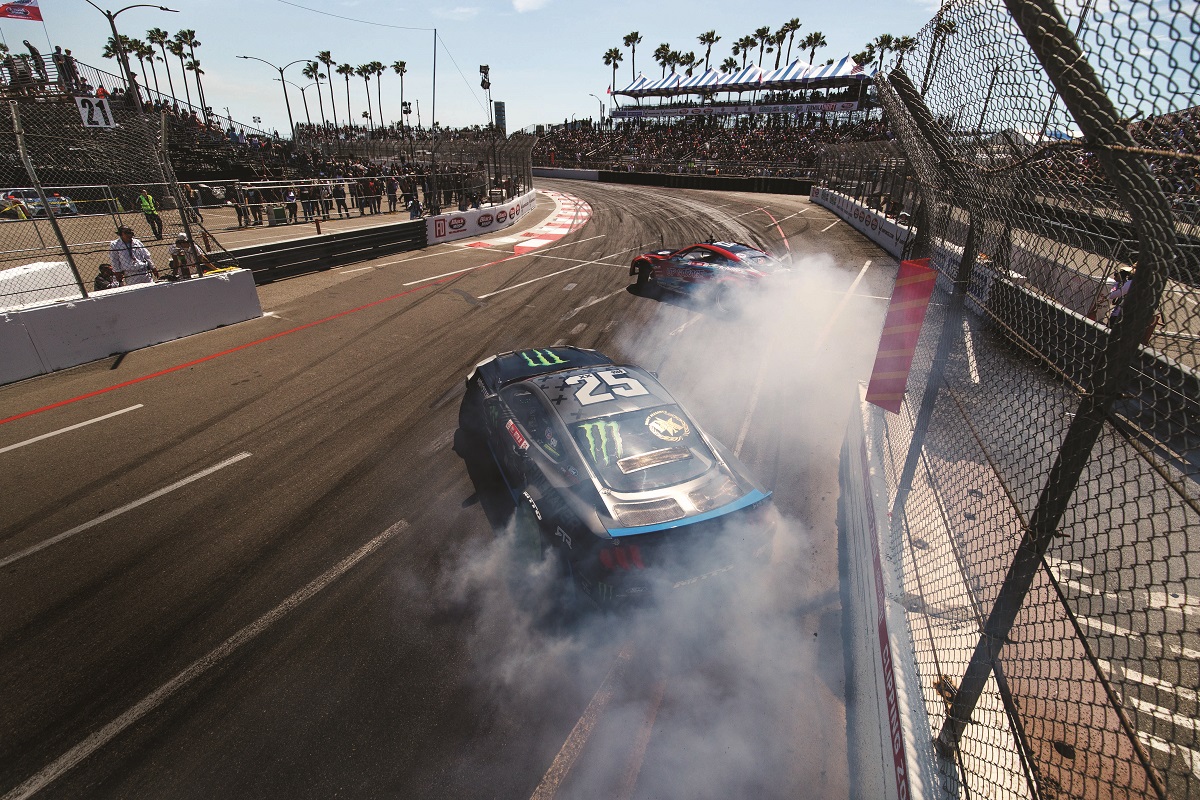 In a drift turn, the frictional force acts centripetally, meaning that it pulls the car in a circular motion, precisely the motion that is required to maneuver a turn. During a drift, you essentially make a turn too fast, causing the rear tires to lose their grip on the road. As a result, the rear tires over-rotate in the direction of the turn, which makes them go into a spin. To compensate for this over-rotation and spinning of the rear tires, you have to turn the front tires in the opposite direction of the turn that you were originally making. Drifters balance the amount of traction they lose on the rear wheels by constantly balancing the wheel speed and the slide. 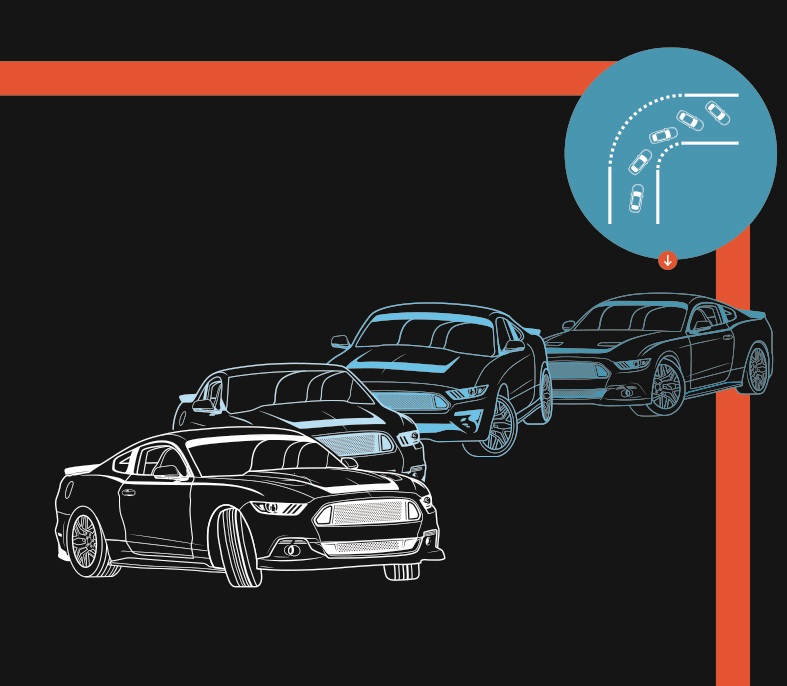 Drifting is not about being the fastest or crossing the finish line first. Drifting is all about skill and showmanship, with each driver being assessed and awarded points for things like speed, angle, line, and personality X factor.

One of those drifter personalities, Vaughn Gittin, Jr., is living a gearhead’s dream. The 2010 Formula D champion is a regular winner on the drifting circuit in his Monster Energy Nitto Tire Ford Mustang RTR. He has expanded his motorsports activities into road racing and off-road racing, where he won the 2018 Ultra4 4500 East Coast Championship. The star of viral videos, television, and video games, Gittin also became involved in the 2000s in the creation of custom Mustangs under the RTR—Ready to Rock—brand. In late 2019, The Henry Ford Magazine interrupted his busy schedule to get the answers to some burning questions. 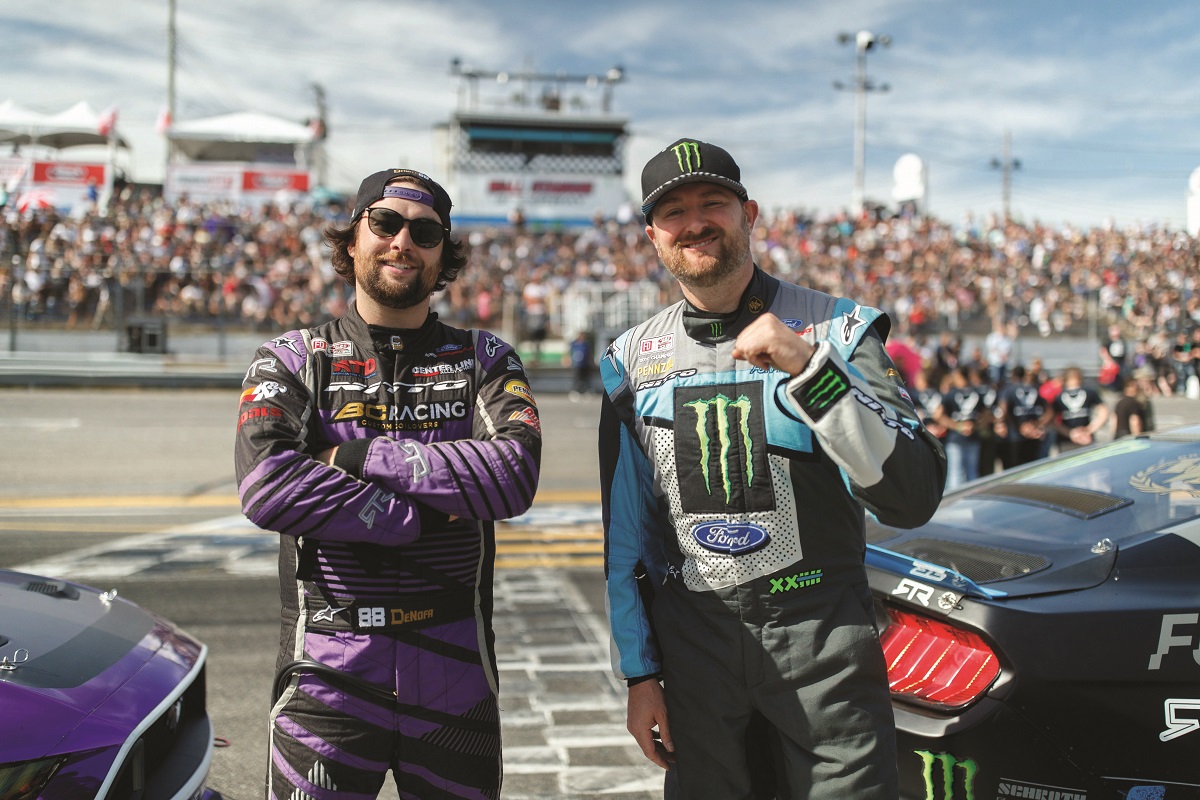 1) How did you first become attracted to drifting and what makes you so good?

Vaughn Gittin, Jr.: My love for cars in general stems back to being a child. My dad was a used-car salesman, and he was a warm-blooded hotrodder. He was always bringing unique, cool cars home. At four years old, I got a go-kart. I vividly remember going out, going as fast as I could and pulling the little brake and making the go-kart slide. Fast forward through skateboarding, riding BMX, motocross…. When I was 18, I got my first rear-wheel-drive car, and I would go to the industrial parks and parking lots where I used to ride my go-kart and do donuts, burnouts, powerslides. Eventually, I saw videos of this sport called drifting, and my perspective was that it was about showing your style and personality with really awesome cars. It was something I just really, really enjoyed.

Right about that time, drifting was coming to the U.S. from Japan. I went to my first organized drift event in 2001 or 2002 and immediately realized that all these things I’ve done—the playing around, the motocross, the skateboarding—really taught me good car control. And I was pretty good, naturally, at drifting. I fell in love with the culture, the scene, the people, and the camaraderie.

Vaughn Gittin, Jr.: To me, fun and fun-having is a mindset. We all have our bad days, and we all have the things we have to do that we don’t necessarily want to do to achieve our goals and dreams.

But I always find something fun in just about everything I’m doing. It’s very similar to what kind of person you are: an optimist or a pessimist? Is the glass half full or half empty? I think a fun haver always looks at life and challenges with the glass half full and creates fun out of it. I truly believe that my purpose is to put smiles on faces and hopefully inspire people to have fun on a daily basis because I think it’s important. And anybody can be a fun haver. I’ve dubbed myself a professional one, but it’s a very inclusive movement and something the world needs more of. 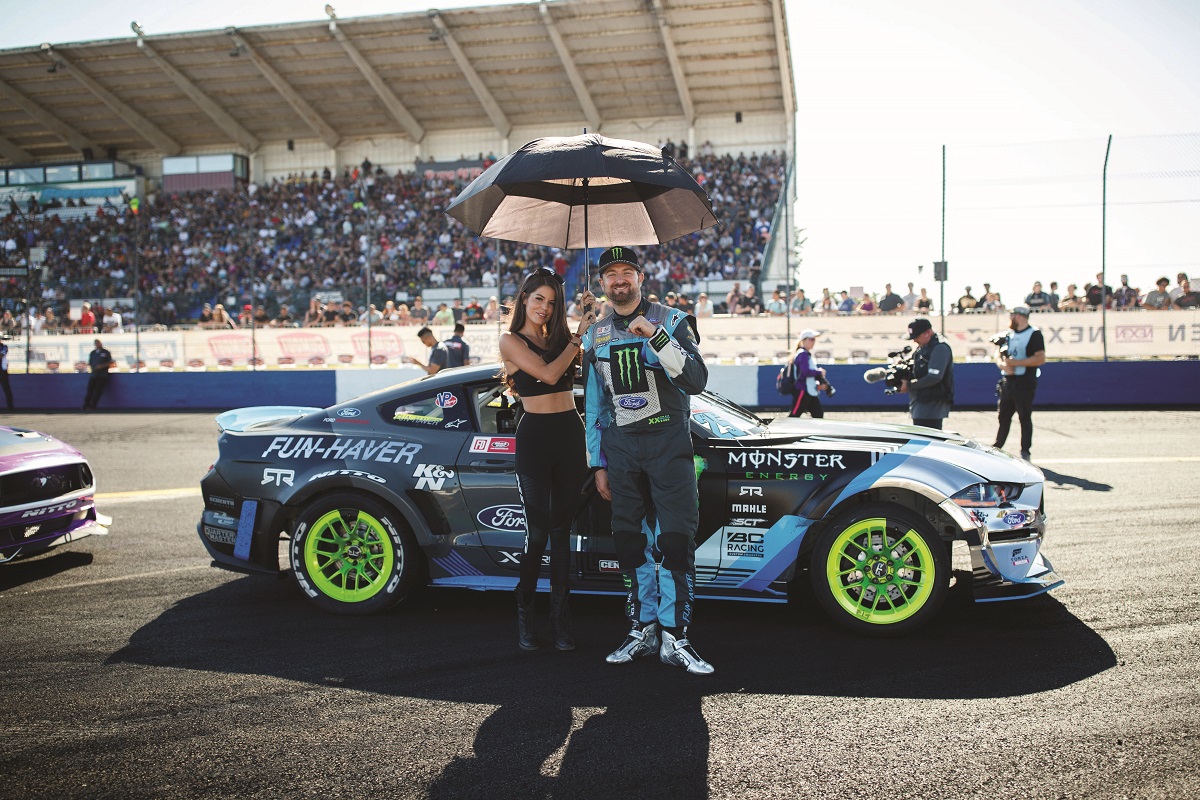 3) What’s next for you in motorsports?

Vaughn Gittin, Jr.: I’m really torn because I have only so much time, and there are so many cool opportunities and things that I’m excited to be a part of. You’re going to continue seeing me having some fun in drifting and competing. I’m definitely focused on doing more festival events, like GRIDLIFE, where I can go and get my fix on the track and have fun and perform and then chat with fans and get people in the passenger seat. Certainly, I have taken a liking to off-road, not just the racing, but the culture and being outdoors. Ultra4 is what I’ve kind of just fallen into the last couple of years, and my perspective is that it’s the most challenging type of off-road racing there is. You race in the desert, you race on the short course, you’re going over massive boulders and driving up waterfalls. It’s an absolutely incredible challenge, and it’s so beautiful when you’re out there.

4) Where do drifting and racing come together?

Vaughn Gittin, Jr.: Drifting is the epitome of car control, arguably one of the most challenging sports—the precision required and the commitment and the mental capacity to be the absolute best you have ever been in your life in that moment, because there are no chances to make mistakes. When you take that focus that has been built from drifting, and the car control and the feeling of the vehicle, it really translates to just about every other single motorsport or anything you could ever do that involves managing the vehicle, managing weight, and pushing yourself outside perceived limits. 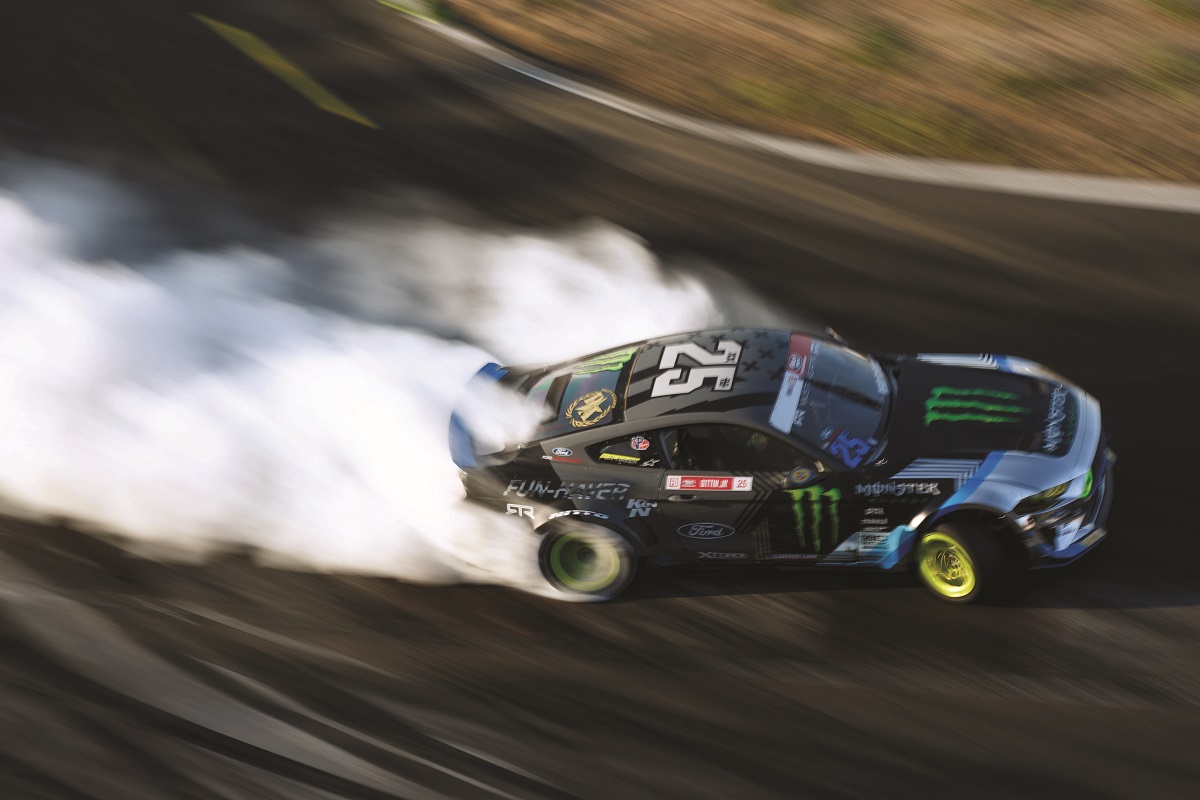 5) What’s harder, being behind the wheel or in front of the camera?

Vaughn Gittin, Jr.: I’ve always been in front of the camera. My mom used to have a camera on us all the time, and I was always a little ham with it. I was never shy of the camera and love being in the car. I would say both are equally as easy!

6) What led to your love of and loyalty to Ford?

Vaughn Gittin, Jr.: Growing up, I wouldn’t have considered myself a Ford guy; I was an import guy. But when Ford came out with that ’05 Mustang, I just fell in love with the look. I thought: “Man, I’d love to bring some American muscle into this import-dominated sport.” I’ve been working with Ford since 2007, and I beat the door down for a couple of years before I got an answer. Since then, I’ve met some really great people that speak my language and love the things that I do. 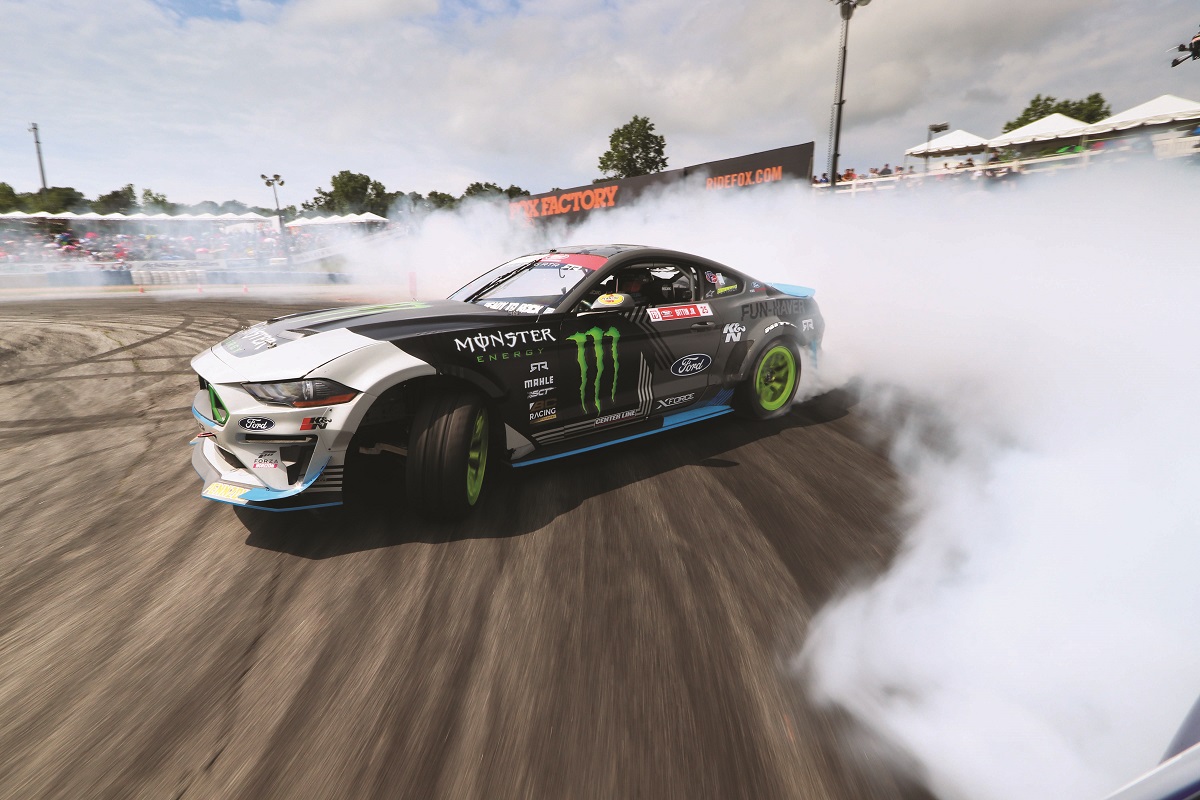 7) How did you come to launch your own brand of customized Mustang?

Vaughn Gittin, Jr.: When I first got into Mustangs in 2005, I was looking for a way to customize it and personalize it, but there was nothing that spoke to me. It inspired me to launch a new generation of Mustang. Ford was doing a phenomenal job building cars for everybody, and I wanted to build something that was for me. That’s when I conceptualized the idea of RTR. I wanted to have a Mustang that was Ready to Rock—it was representative of me from the exterior, and the performance was ready for anything I might want to do.

Vaughn Gittin, Jr.: I think it’s very important to keep your reality and passion in check. These things that we’re passionate about can very easily suck us in and make us forget reality. I maxed out credit cards that took me years to pay off. I think it’s important to pay attention and enjoy your passion, but always keep your reality one foot forward so you don’t get yourself in trouble. Most importantly, have fun!


Richard S. James is a Southern California–based writer, photographer, and content producer. This post was adapted from an article first published in the January–May 2020 issue of The Henry Ford Magazine.