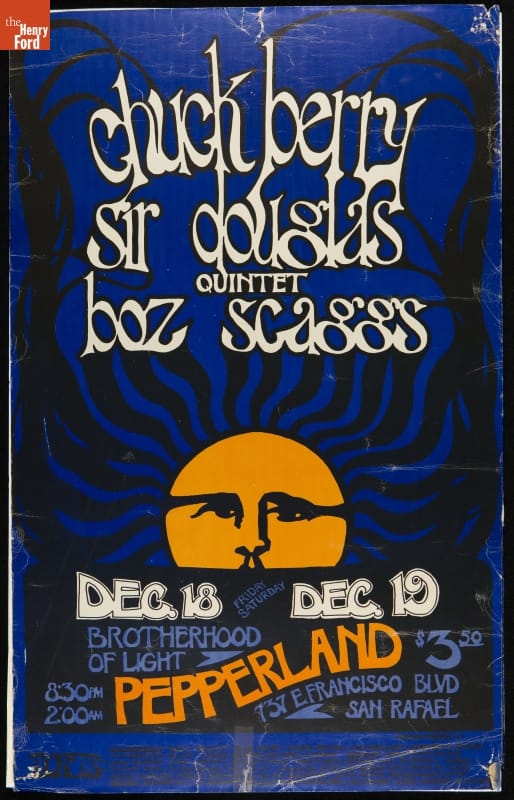 In the digital age, it’s easy to keep up with your favorite bands—you might sign up for their email list, follow them on social media, or get text alerts on your phone. In any of these cases, you’ll probably know when they’re coming to your town to perform.

In the mid-20th century, though, posters were a way to show potential fans which acts would be performing, where, and when. Bright colors, bold graphics, and dramatic fonts caught the attention of passers-by in cities where dozens of venues competed for audiences.

With the 50th anniversary of the Summer Of Love just a few months away, we’ve just digitized a few great examples of rock posters dating between 1969 and 1971, including this poster advertising Chuck Berry, the Sir Douglas Quintet, and Boz Scaggs at Pepperland in San Rafael, California, in 1970.

Visit our Digital Collections to see more rock posters or other rock-related artifacts—and rock on!

Update: This post was originally written on March 13, 2017, only a few days before Chuck Berry’s death at the age of 90. I obviously had no foreknowledge of that event to come, but this poster, out of all the ones we digitized, caught my eye because Mr. Berry holds such a large place in our collective memory, and is an artist I deeply respect and enjoy. I’m glad that The Henry Ford is able to preserve and share some of his quintessentially American legacy. Hail, hail, Chuck Berry—may you rest in peace and your music live on.  –Ellice Engdahl, 3/20/17