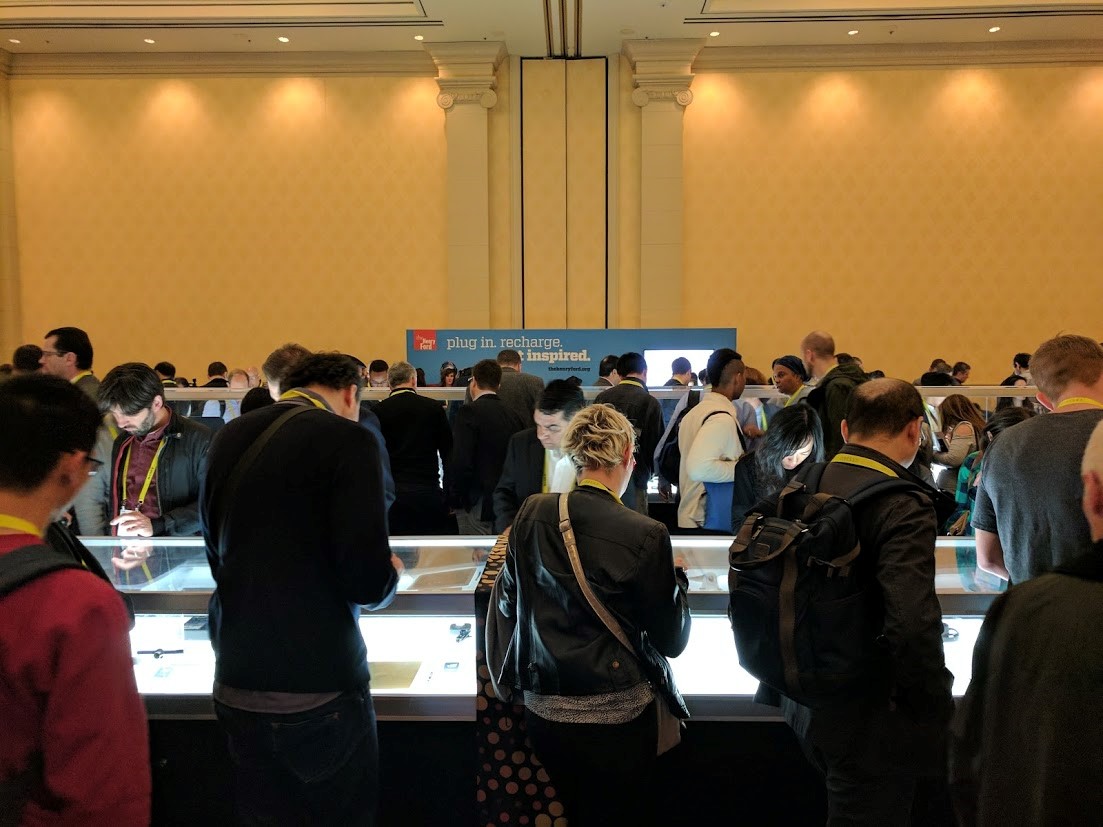 If you explore the Consumer Electronic Show “by the numbers,” the tallies show an influx of 177,000 people into one small area of Las Vegas. Over the course of four days, the visiting population (equivalent to that of a small city) attempts to make its way through nearly 2.5 million square feet of exhibitions presented by almost 4000 different companies. By no means to be shrugged off is the 35 miles of walking I did over the five days that I was there; despite all of this trekking across three separate venues, I failed to see everything.

For those unfamiliar with the event, CES is a global trade show produced by the Consumer Technology Association. Every January, established companies and young startups alike launch and demonstrate the latest in consumer technology. At this event, some of the biggest names in innovation display alongside next-generation technology developers. 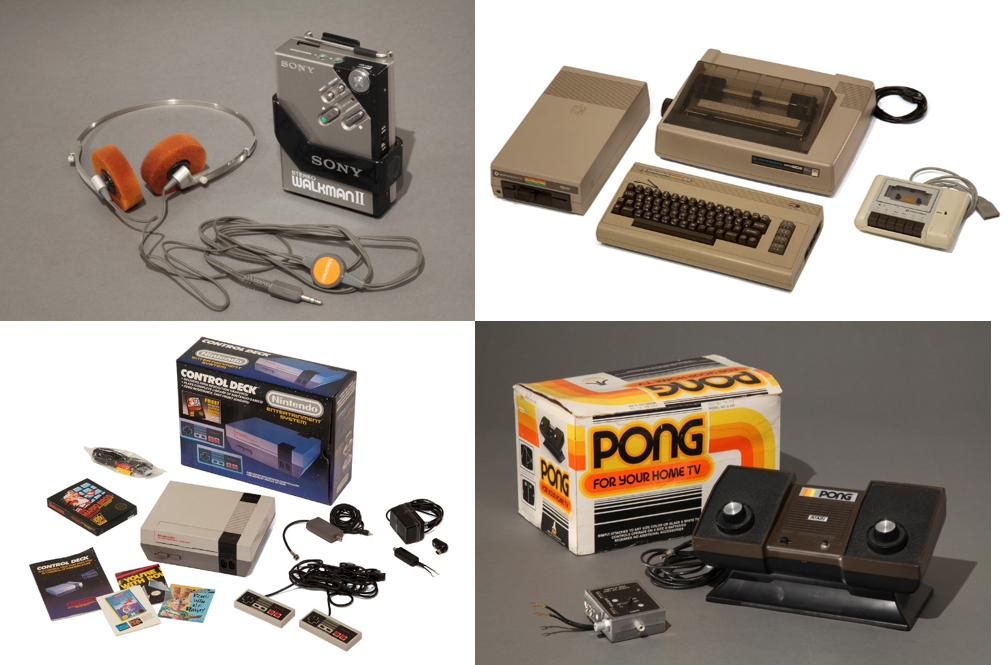 Many artifacts from The Henry Ford’s collections, including those above, were first launched at CES.

In 2017, CES reached its 50th anniversary. To celebrate this milestone, an exhibition of devices first introduced to the public at the show were on display. The list of technology unveiled at CES over the years is impressive: Sony’s U-matic VCR (1970), the Sony/JVC personal Camcorder (1981), Philips’ CD player (1981)—as well as a lineage of media formats like the laserdisc (1978), CD (1981), DVD (1996), and Blu-Ray (2004). Many items that were introduced to the marketplace at CES also appear in The Henry Ford’s collections: Atari’s version of Home Pong (1975), the Commodore 64 (1982), the Nintendo Entertainment System (1985), the Sony Walkman (1980), and many cellphones from the 1980s that seem laughably large to us now such as the Motorola “brick phone” and wearable StarTAC flip-phone. 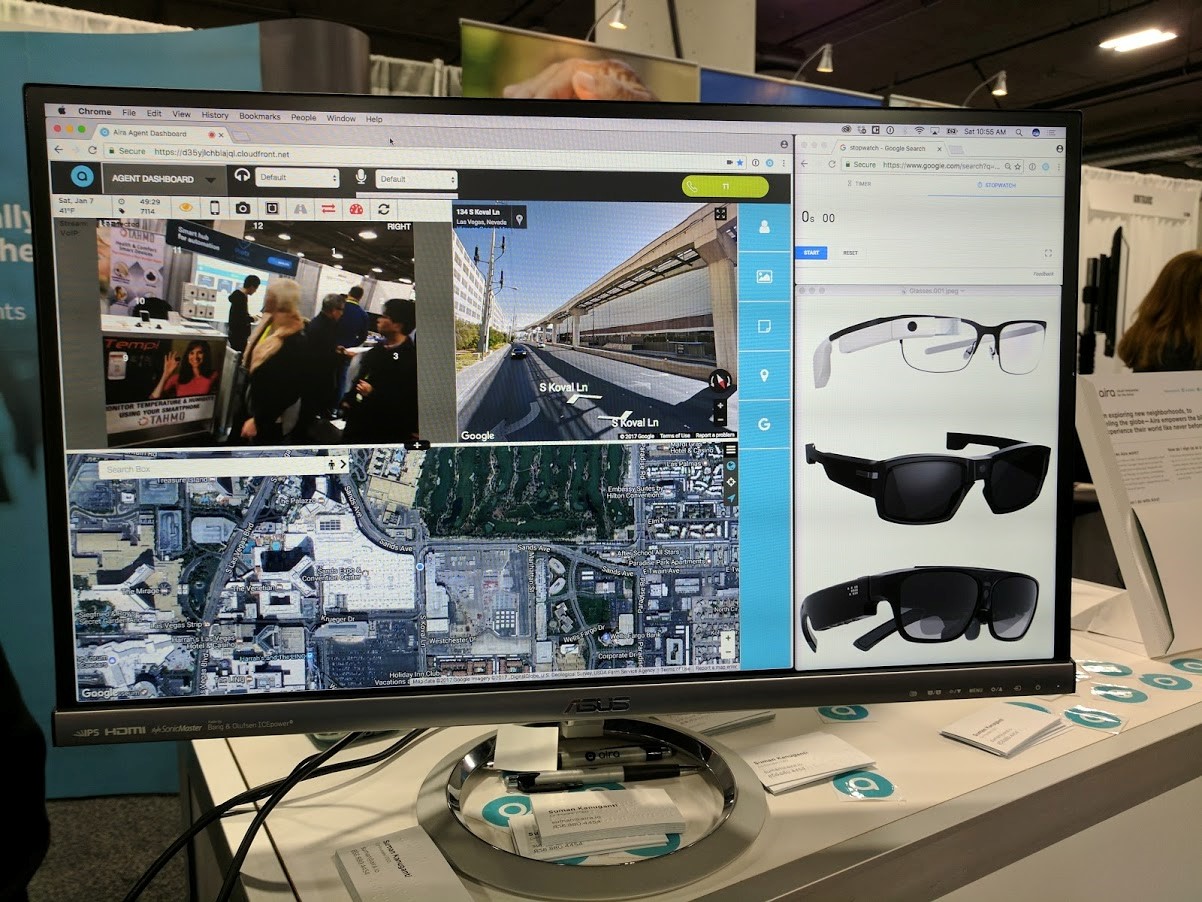 The Aira service is a digital visual interpreter for the blind.

The Henry Ford also sponsored the CES 2017 Innovation Awards—“an annual competition honoring outstanding design and engineering in consumer technology products.” Several winners in the Accessibile Tech category were of interest, given The Henry Ford’s archival collections documenting a visit from Helen Keller, blind workers at the Ford Rouge, TTY/TDD devices, or vibrating alarm clocks for the deaf and hard of hearing. The Aipoly application uses artificial intelligence and a smartphone camera to help the blind identify objects around them; the Aira service is a similar real-time visual interpreter that makes use of wearable devices like Google Glass to do the same. The ReSound ENZO2 hearing aid also makes use of the Bluetooth technology embedded in smartphones, allowing people to adjust noise cancellation levels in crowded area from an app on their phone—or to stream phone calls and music directly to their assistive devices.

Increased awareness of digital citizenship and responsibility were also evident in the Innovation Awards—an important theme that will continue to affect our technology collections as we continue to grow them. The XooLoo Digital Coach rethinks parental controls over teen’s technology use. Rather than simply limiting content, this application allows parents to ethically participate and learn about the patterns of use in their children’s digital lives. The app does many things, such as log the amount of time spent on websites and social media, allows parents to turn off digital access during mealtimes—yet respects privacy by not exposing messages or geo-tracking. Other examples include the Motorola Moto-Mods series, which allows a Moto Z phone to transform into a boombox or a big screen projector—turning the solitary viewing or listening of media stored on smartphones into outward, shared experiences. The pleasant-looking Remi smart alarm clock by UrbanHello visually trains children how to create better sleep routines, which results in healthy growth, moods, and learning. Its glowing face flips from sleepy to happy mode, indicating when it is acceptable for a child to get out of bed; additional custom programming tells children when to brush teeth, plays calming music or can act as a monitoring device. 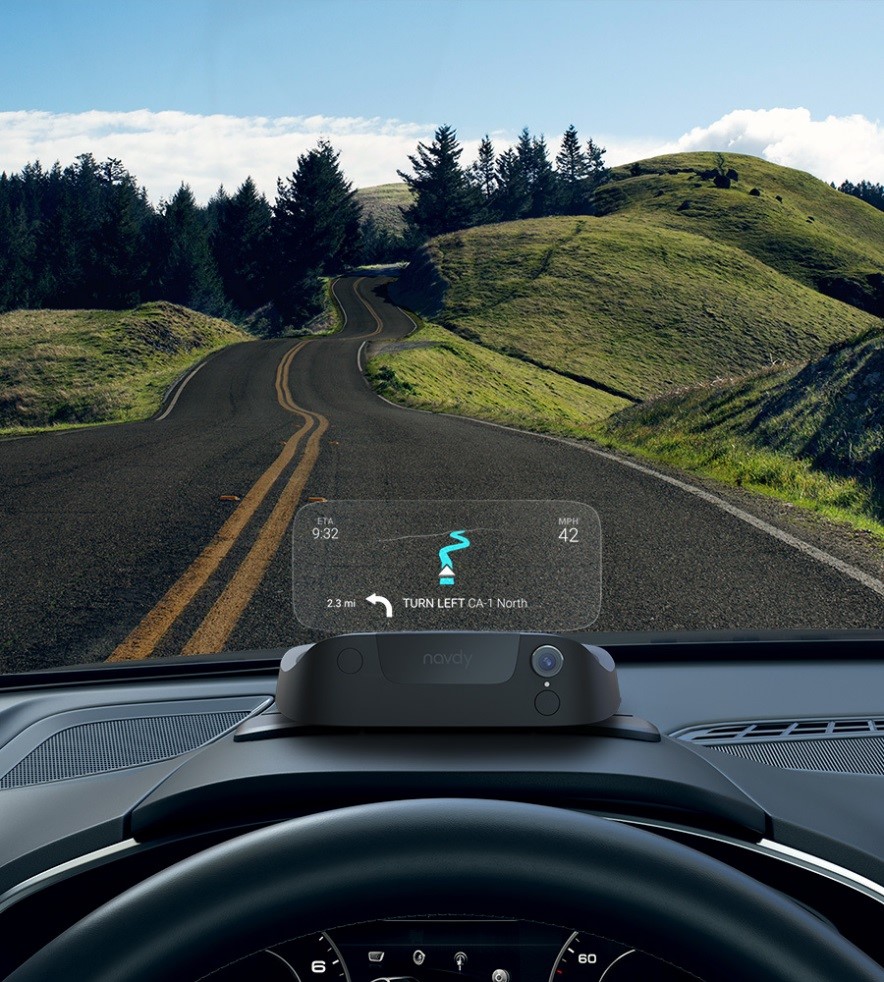 The Navdy heads-up display allows drivers to see basic information linked from cell phone apps through a transparent screen on their dashboard. (Image courtesy of Navdy)

The continuing exploration into the applications of Artificial Intelligence and Augmented Reality dominated many booths, and was present in the work of several Best of Innovation Awardees. The Google Tilt Brush has been receiving attention as one of the first “killer apps” designed for VR, allowing people to create immersive worlds of painted light that might be applied towards prototyping video games, fashion, art projects, and industrial design.


And the Navdy Head-Up Display projects essential information linked from smartphone applications onto a clear display that rests in the line of sight of a driver’s windshield. Intended to reduce mental distraction that comes with needing to turn one’s head to look at vehicle technology, the Navdy allows drivers to see basic mapping, messages, and incoming phone calls without looking at their cellphones. 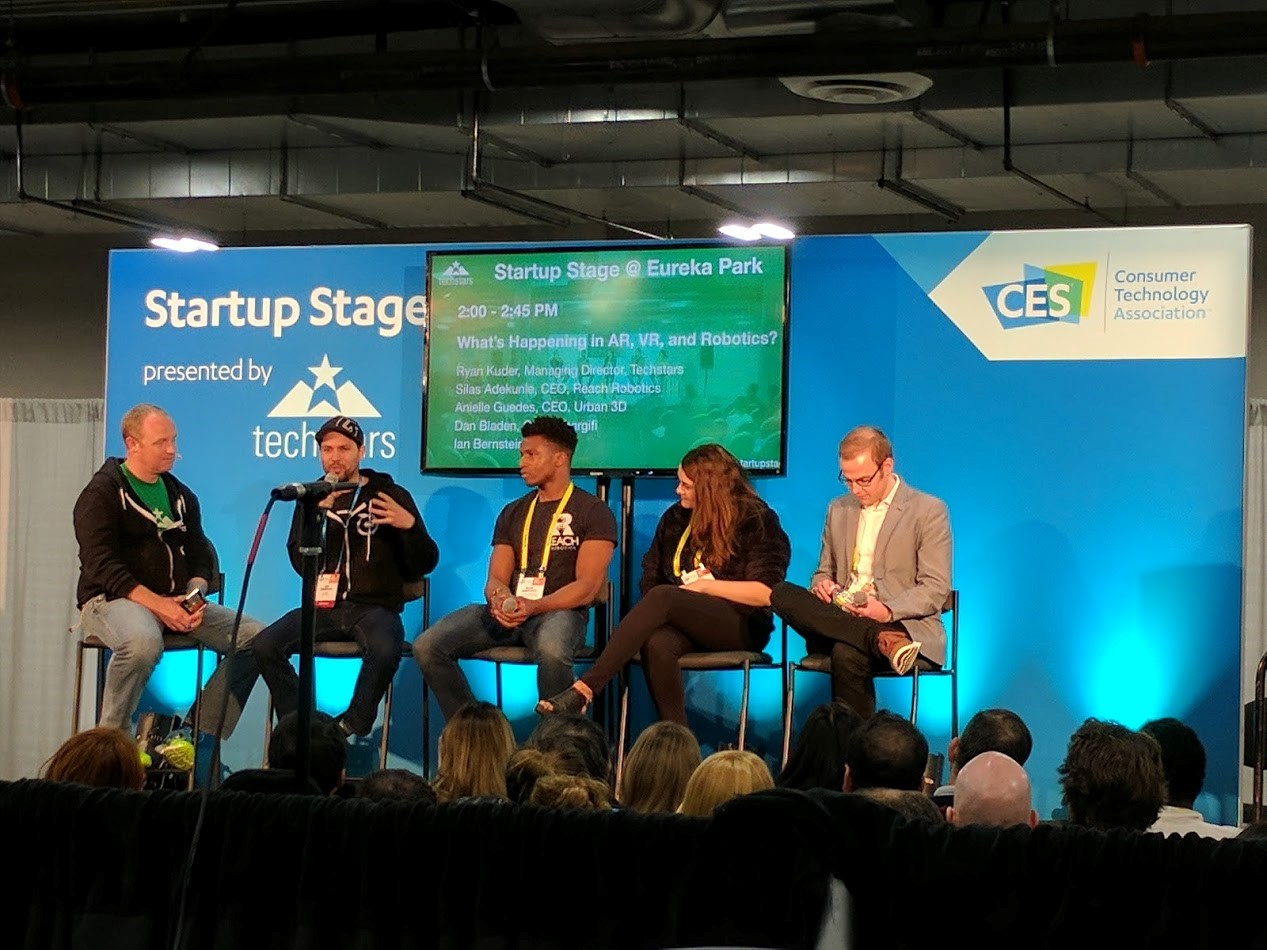 At a TechStars panel discussion, Ian Bernstein of the robotics company Sphero spoke about the importance of a young hardware company being able to “fake it.” Sphero was one of the first three companies in the world to create a device controllable from a smartphone. Their quirky spherical robots glide around with huge amounts of personality. Today, most people would recognize their Star Wars BB-8 toy sold in major retail stores beginning in 2015. But when Bernstein and co-inventor Adam Wilson first demonstrated their prototype Sphero at CES in 2011, after two days of heavy use, the 3D printed shells started to break down. On the third day of CES, the robots might have looked the same to visitors, but in reality, hours before the show opened, Bernstein had been misting clear backup shells with white spray-paint out in the parking lot. The spheres were also held together with clear silicon bands to make it easier for his friends working the booth to charge drained batteries.

As a curator of technology, it was easy to become overwhelmed by the sheer volume and potential of promising new technologies that were everywhere I looked. But beyond the dazzle of the “near future,” there were other layers to consider: the absolute importance of technology as an agent of social transformation, the remixing of old technologies into new—or the collapsing of multiple technologies down into one “convergence” device. Also tangible was the sheer amount of ingenuity and resourcefulness it could take for a single company to finally reach a point of presenting their work to the public. The innovator trait of embracing failure and revision in the prototyping process was also top of mind as I walked through the show. In the end, it is difficult to predict which ideas and devices will eventually reach the level of mass adoption by the everyday people—a key component to the “staying power” of technology. 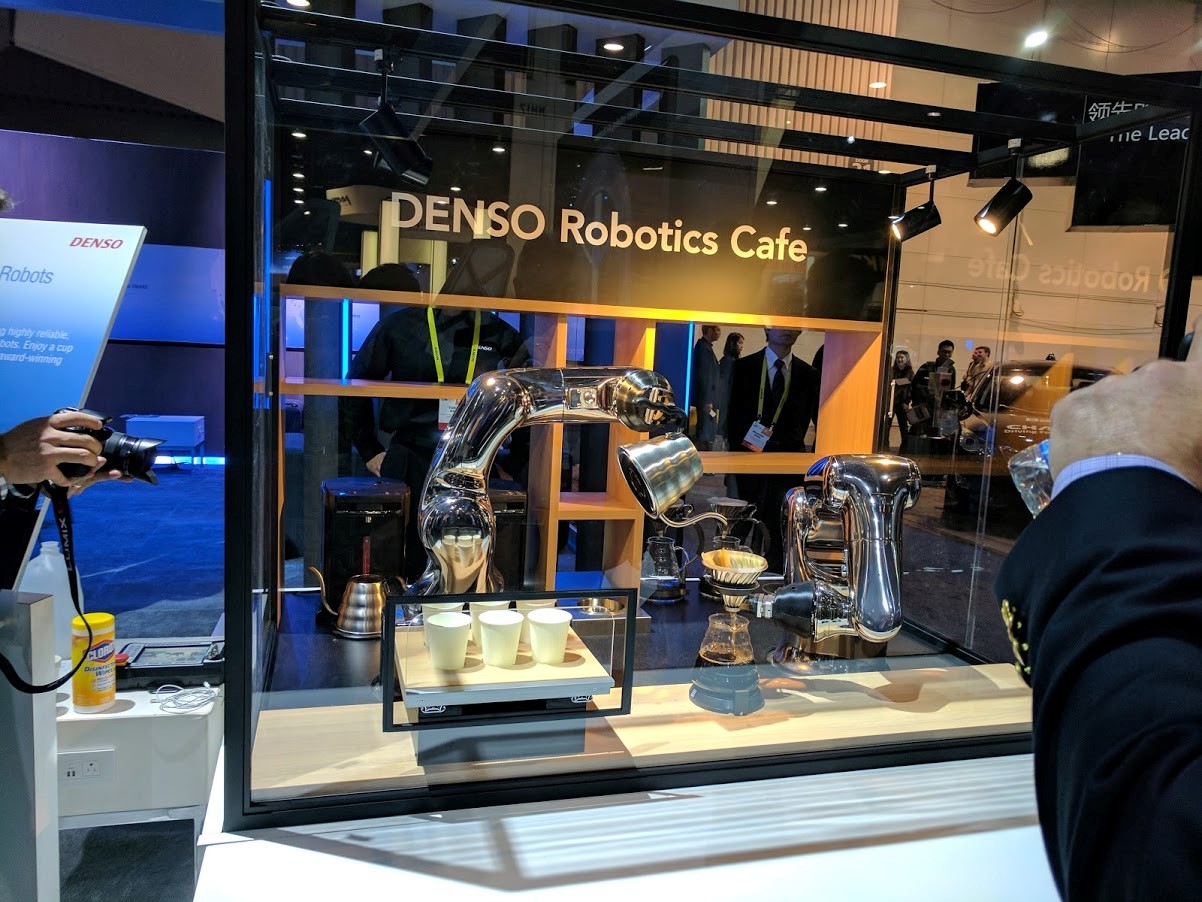 Our curator of technology can verify that the coffee made in the DENSO Robotics Café was very good.

Many people have asked: “what is the best thing you saw at CES?” This question usually results into a wide-eyed panic as I try to rank one incredible bit of innovation over the other. But maybe a better question would be “what is the strangest thing you experienced at CES?” Immediate answer: being served a surprisingly good cup of pour-over coffee brewed by two graceful robot arms in the DENSO robotics booth. Once the former barista in me stopped thinking in a panic—“the robots are coming!”—the caffeine fix was appreciated, all the same.