Every January, the tech world descends upon Las Vegas for the Consumer Electronics Show. In 2018, over 4000 global companies displayed their products and ideas, spread throughout 2.6 million square feet of exhibition space in the Las Vegas Convention Center and ten hotels. Nearly 185,000 industry professionals, exhibitors, and media from around the world attended this year. By the numbers, it is an impressive event.

Many successful home technologies have made their debut at CES over its 51-year run: VCRs, camcorders, CD players, DVDs, tablet computers—even the original Nintendo Entertainment System and Xbox. This year’s trends included the forthcoming “5G network,” digital health and fitness, and improved autonomous vehicles. One “battle” visible on the show floor was the widespread adoption of voice-command technology—from smart speakers in the home to command modules in vehicles—and which platform would reign. Ask Alexa. Hey Google. Hi Bixby.

CES has been known to “make or break” companies. Established companies use the event as a forum to launch new products, improve existing devices, or inadvertently—present the occasional flop. Likewise, the 600+ startup companies that populate the specialized “Eureka Park” section angle to find the right pair of eyes on their idea and to secure funding for marketplace production.

Even with two curators on the ground, it was impossible to see everything. What follows is a sampling of our Curator of Communication & Information Technology and our Curator of Transportation’s favorite “CES Moments.” 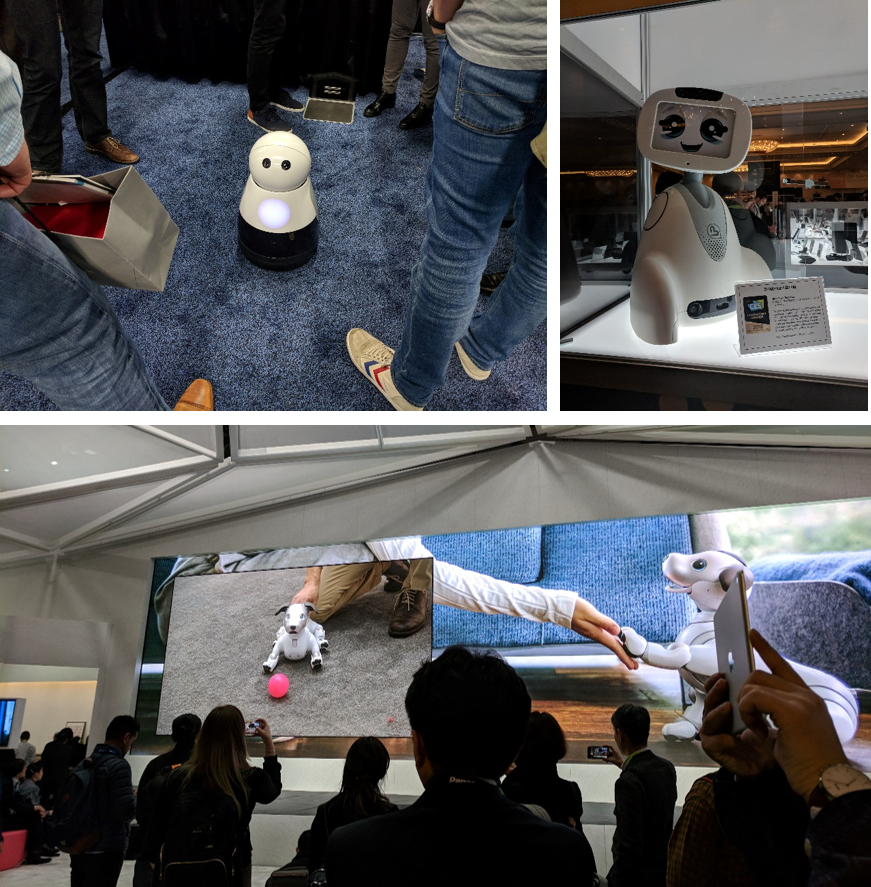 Here come the robots! Some of them can’t be described as anything but “cute,” like this Kuri model (upper left) from Mayfield Robotics. Also popular was Blue Frog’s “Buddy,” (upper right) and Sony’s Aibo the robot dog (bottom). All three of these devices are designed as “companion robots” and have a variety of expressive features. Today’s robots are equipped with facial recognition, cameras for capturing life’s moments, and often double as home security.

Analog is always new again! The proliferation of quality cellphone cameras and social media has all but locked our memories into digital landscapes. But people remain hungry for physical media and printed photographs. This year at CES, Kodak displayed the Printomatic (right) and Polaroid announced the OneStep 2—an instant camera blending old and new technology (left, middle). The colorful film options and iconic square format should look familiar to today’s Instagrammers. Continuing in the analog spirit… When the Technics SL-1200 record turntable debuted in 1972, its direct-drive technology made it an immediate hit not just with consumers but also with radio and club DJs. These robust “Wheels of Steel” played an essential role in the early years of hip hop record scratching and live dance music mixing. While the SL-1200 went out of production in 2010, many 1970s-era Technics remain in use today. At 2017’s CES, the coveted device began production once again. This year, Technics announced a new high-end turntable—the SL-1000R—which carries over the best qualities of the SL-1200. While the drastic rise in recent vinyl sales is often touted as a “revival,” the commitment of companies to produce quality turntables is evidence that the medium never really went away. 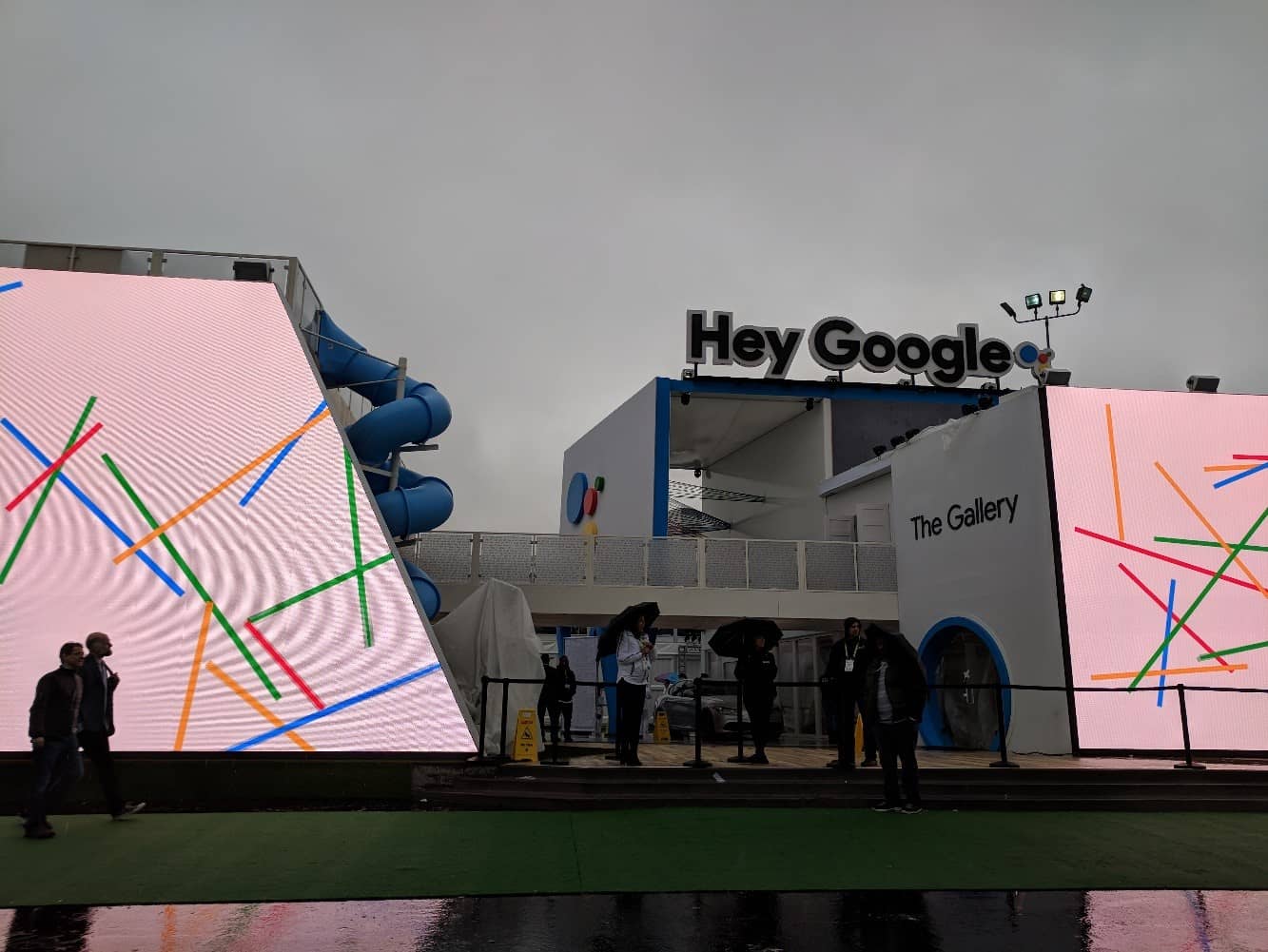 There was a lot of buzz at CES 2018 about the coming of the “voice assistant wars” between Amazon’s Alexa, Google Assistant, and a flood of startups finding their way into the mix. Voice-activated technology is nearly ubiquitous, as we have learned to ask Siri and Google for directions. And smart home devices—especially interactive speakers—have become more commonplace as we use them not only to listen to music and podcasts, but also to seek out information like weather, steps to a recipe, or to set up reminders. Our tech curator’s biggest CES disappointment was the heavy rains and floods that forced the Google Assistant booth to close, as well as that fun looking slide to the left.

Growing plants – that’s technology too! A variety of companies presented vertical hydroponic growing systems, geared towards health-savvy consumers who wish to take control of the food they consume. The SmallGarden by ēdn (right) and products by Opcom Farm (left) have married stylish, scalable design with LED lighting and intelligent automation. 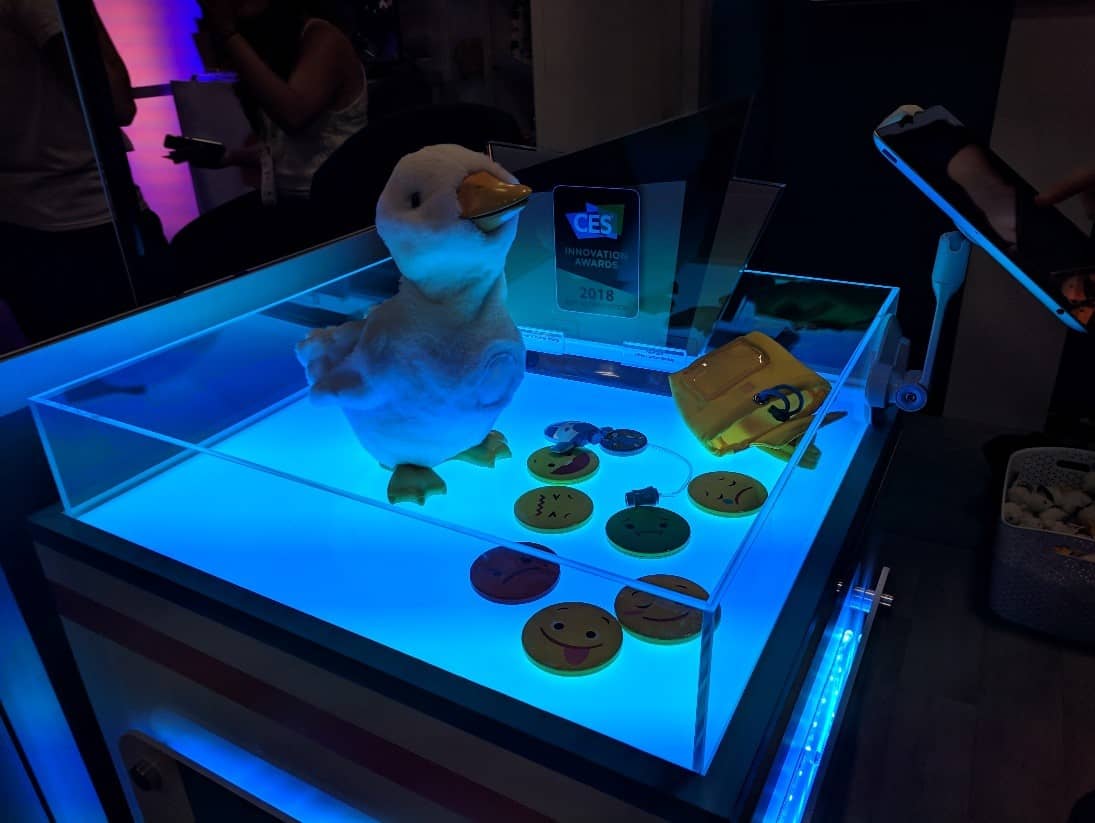 And perhaps our tech curator’s favorite item at CES this year was this robotic duck, designed through a partnership between Aflac and Sproutel. The award-winning “My Special Aflac Duck” is designed to help children cope with cancer treatment. Its touch sensors respond with soothing sounds when it is cuddled with, and it teaches young children calming breathing exercises while they undergo IV treatments. Round RFID chips containing emoji faces are meant to mirror emotions—when tapped against the duck, the toy will then reflect its patient’s feelings by groaning or quacking happily. An accessory even allows kids to play out administering “medication.” These features combine to allow young patients to communicate their emotions effectively, take on the role of caregiver, and reduce anxiety. The duck will be tested at an Atlanta treatment center this year, with the future goal of donating the social robot to any child diagnosed with cancer, nationwide.

While it’s not quite the North American International Auto Show, CES is an increasingly important venue for automakers to debut new technologies, or to announce new partnerships with tech-savvy firms. If the automotive side of this year’s show was to be captured in a single word, it’s “autonomy.” Self-driving vehicles are on everyone’s mind – we’re no longer talking about this tech in terms of “if,” but “when.” 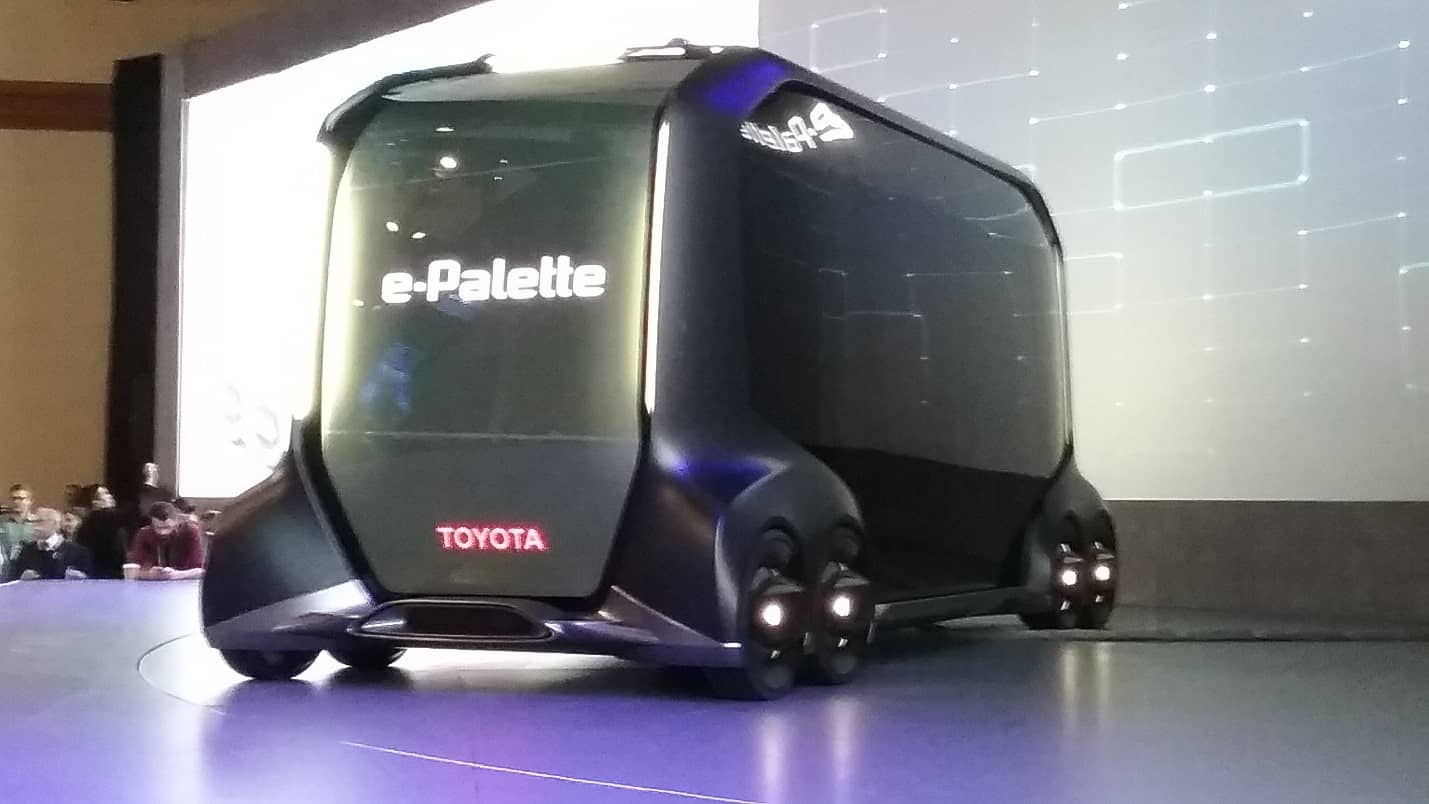 Toyota president Akio Toyoda spoke clearly to the growing overlap between the automotive and tech worlds when he noted that his company’s competitors now include not only carmakers like General Motors, Volkswagen and Honda, but also firms like Google, Apple and Facebook. Toyoda sees the car evolving into a personal assistant, using predictive artificial intelligence to anticipate the travel needs of its owner. And, like a growing number of other industry members and observers, he also predicts the inevitable – if slow – extinction of the internal combustion engine. Toyota and Lexus plan to offer electric or hybrid versions of every one of their models by 2025.

Toyota’s big CES announcement focused on its e-Palette concept (above). The fully-autonomous electric vehicle is designed for maximum flexibility. An e-Palette could serve as a bus providing ride sharing services. It could work as a mobile store bringing goods to your front door on demand. It could even function as a rolling flexible workspace, giving us back some of those 38 hours that the average American loses to traffic congestion each year. Companies like Amazon, Pizza Hut and Uber have already agreed to partner with Toyota in e-Palette’s development. Self-driving cars offer more than mere productivity. Safety promises to be their greatest benefit. Some 35,000 people die in motor vehicle accidents in the U.S. each year, and 90 percent of those accidents are due to human error. Eliminate the human element, so the thinking goes, and you eliminate the vast majority of those deaths.

Sophisticated lifesaving tools are here today. CES exhibitor eyeSight Technologies uses in-car sensors to track driver eye movement, blink rate and head pose (above). Look away from the road – say, at your phone – for too long and the system can trigger an audible alarm. Blink too often or for too long – perhaps because you’re too drowsy to drive – and the system could conceivably cause the car to slow down and pull off to the side of the road.

There are still many problems to solve before we have fully-autonomous cars in every garage. Who’s liable in an accident? The carmaker, the programmer, the owner? What happens when you’re traveling in a remote area with poor broadband service – and no GPS? What happens in the “transition” period, when self-driving cars share the road with human-driven vehicles? Can they communicate with one another? And the biggest question of all: Will people be comfortable putting their lives in a computer’s hands? But, ready or not, this new world is coming. In fact, it had already arrived at CES – Lyft and Aptive partnered to provide rides around Las Vegas in autonomous BMWs. 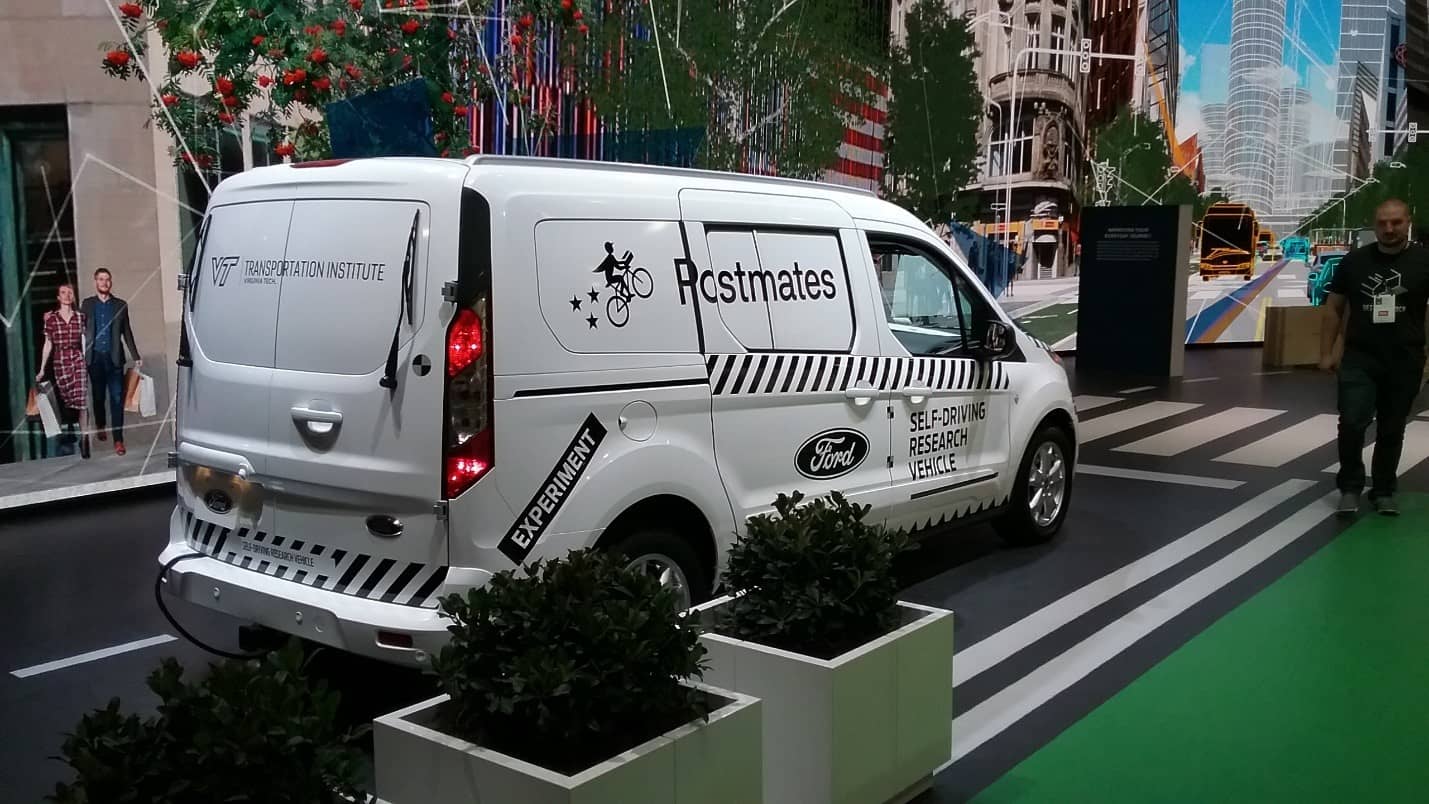 When you think about the relationship between humans and self-driving cars, remember that it’s not just the humans inside the car. How pedestrians, cyclists and other street users interact with an autonomous vehicle is equally important. Ford’s CES booth featured a van at the center of an interesting research project (above). In the study, a driver camouflages himself in a seat-cover costume – yes, really – and then drives around gauging people’s reactions. How disconcerting is it to see an empty van rolling toward the crosswalk? And how confident can you be that it’ll stop for you? Ford and Toyota both emphasized that they’re not in the car business anymore – they’re in the mobility business. The recreated streetscape in Ford’s booth included not only the van and an autonomous Fusion sedan, but also bicycles, skaters and pedestrians. Ride sharing and self-driving vehicles will reduce traffic, either by cutting the number of cars on the road, or by using roads more efficiently. It’s a dream come true for urbanists who’ve long searched for ways to reclaim pavement for uses other than moving and/or parking cars. (Ever hear the term woonerf? You will!) In fact, Ford’s street even included park benches and grass in a reclaimed lane (above). 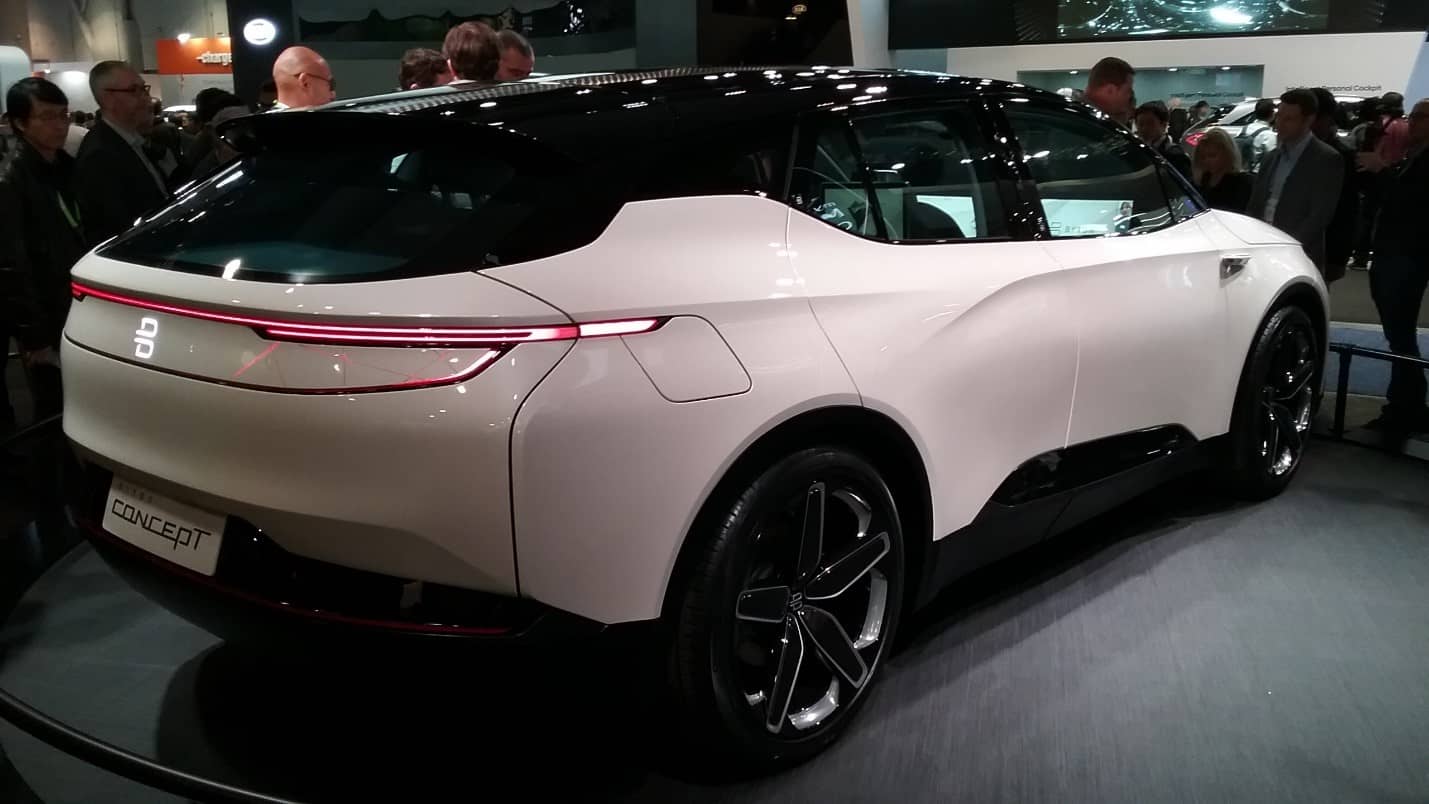 The twin revolutions of the electric powertrain and autonomous capability may provide the best opportunity to get into the car business since just after World War II. Few newcomers attracted as much attention at CES as Byton. The Chinese manufacturer plans to enter the American market in 2020 with a battery-powered Level 3 autonomous car capable of up to 325 miles between charges (above). Instead of a dashboard, Byton’s car uses a 49-inch screen. And instead of knobs and buttons – or even a touchscreen – passengers control the car’s features with hand gestures. And you don’t even have to worry about locking your keys in the car – the Byton’s doors are unlocked with facial recognition software. And finally, for something completely different, the prize for Most Unexpected Quadricycle Sighting goes to… Gibson Guitars (above). The company’s special edition “20th Century Tribute” archtop, on display in its CES tent, featured images of influential people, technologies and events from the past century. Note that Orville and Wilbur Wright had a well-deserved spot, too!