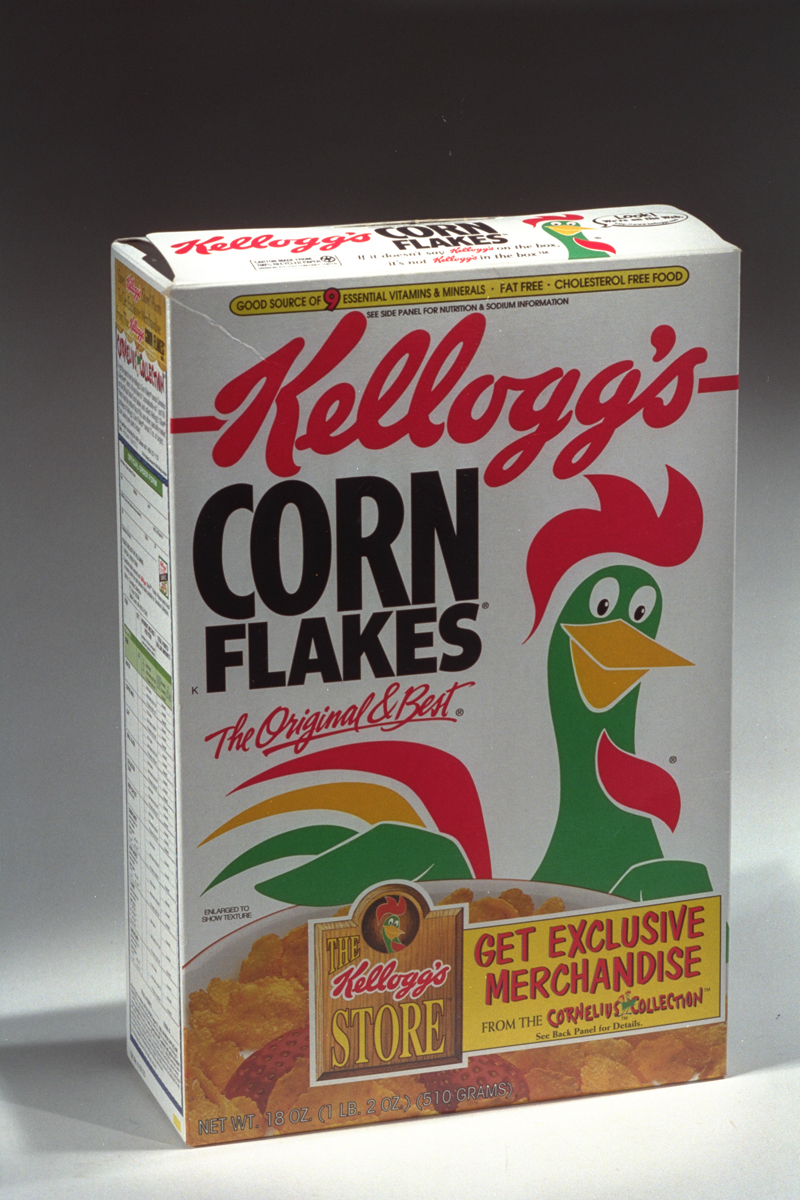 Perhaps it could only happen in western Michigan: the combination of religious fervor, fertile soil to grow grains that could be transformed into easily digestible breakfast cereals, and the spirit that one could accomplish anything with hard work and determination. Out of this world came John Harvey (J.H.) and William Keith (W.K.) Kellogg—two brothers who would transform the way that Americans ate breakfast. They were, unfortunately, often at odds. And they didn’t work alone. But, through their persistence and combined efforts, the dry cereal flakes they perfected would start a breakfast revolution.

Into the early 20th century, the American breakfast was often heavy, starchy, salty, and fatty—laden with leftovers from last night’s dinner, like cured meats, day-old biscuits, and lard-fried potatoes. No wonder that one of the most common complaints of the time was “dyspepsia”—a term that applied to a medley of stomach ailments, including constipation, diarrhea, heartburn, and indigestion. For the sick and the elderly, lengthy cooking of porridges or gruels was the only morning-meal alternative. 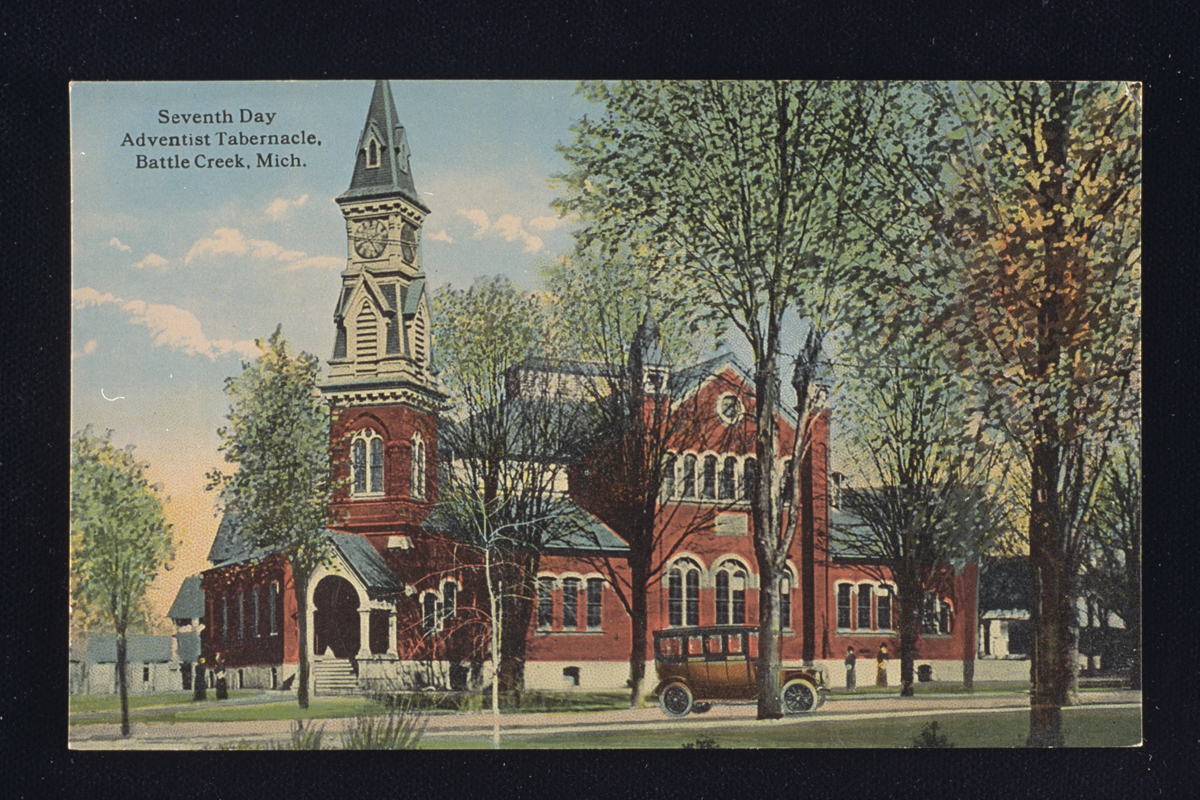 The Kellogg brothers—John Harvey (1852-1943) and his younger brother Will Keith (1860-1951)—grew up in the close-knit community of Battle Creek, Michigan, a center for the Seventh-day Adventist Church. Members of this homegrown Christian religious sect not only believed in the connection between spiritual and physical health, but also that healthy living depended upon maintaining a nutritious vegetable- and grain-based diet.

Seventh-day Adventist leaders Ellen and James White hand-picked J.H. Kellogg to run their medical and health programs in Battle Creek, and ultimately sent him to the prestigious Bellevue Hospital Medical College in New York City. It was during his morning rush to classes at Bellevue that he began thinking about creating a nutritious, ready-to-eat cereal. 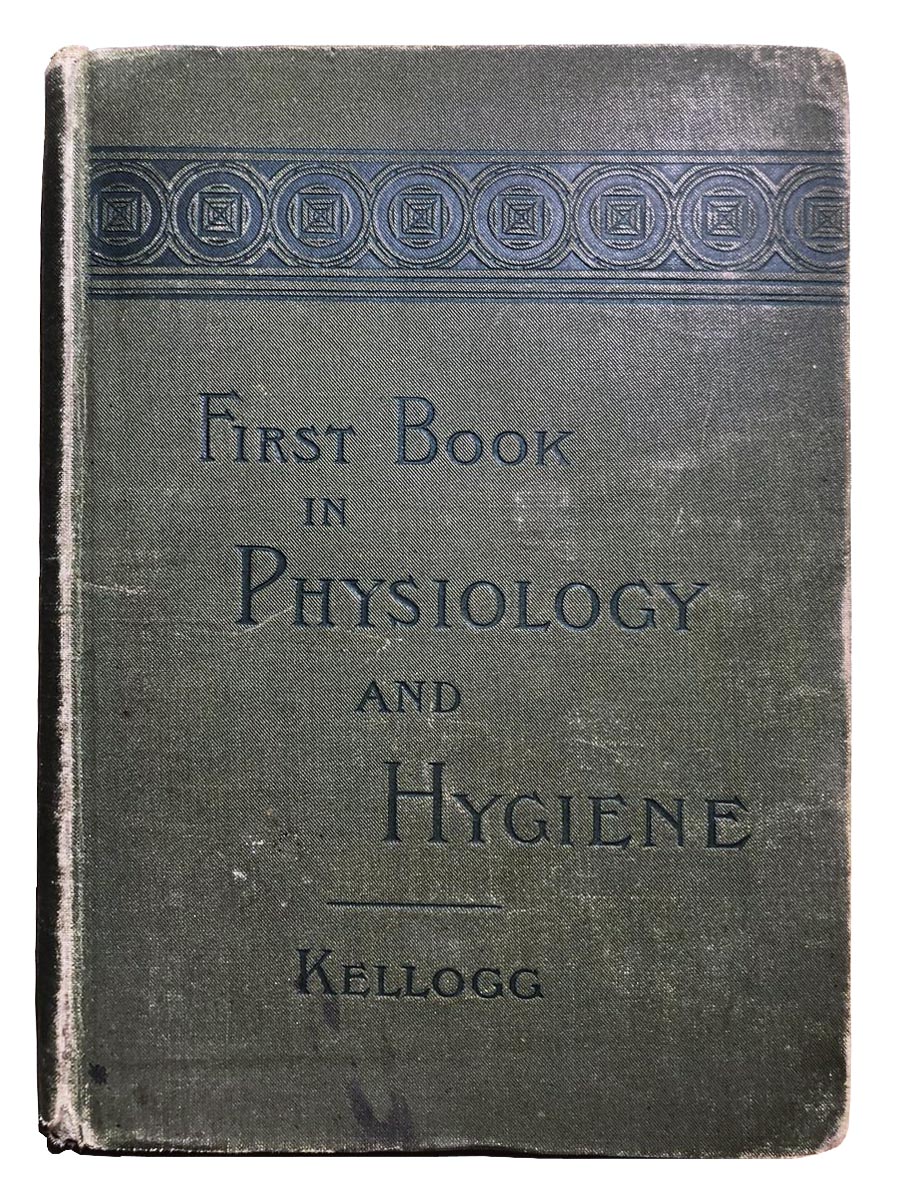 In 1888, Dr. John Harvey Kellogg authored this book (29.1119.14), aimed at explaining to young people, “in clear and simple language,” the structure and functions of the human body as well as his personal philosophy for healthful living. THF183317

Upon returning to Battle Creek in 1876, Dr. J.H. Kellogg assumed leadership of the Whites’ Western Health Reform Institute. But his vision was much larger than theirs, ultimately leading to his breaking ties with his Seventh-day Adventist backers. With the able (but underappreciated) assistance of his brother, Will, to run the business end of things, Dr. Kellogg turned the Whites’ once-modest institution into the grand Battle Creek Sanitarium. Nicknamed the San, this “university of health” would become a world-famous health resort, catering to the rich and famous (including Henry Ford) as well as the truly ill. At the San, Dr. Kellogg would profess and put into practice his long-held philosophy of “biologic living”—that is, the belief that correct eating and drinking, plenty of exercise, hydrotherapy, and the abstinence of tobacco would lead to a healthy mind, body, and spirit. 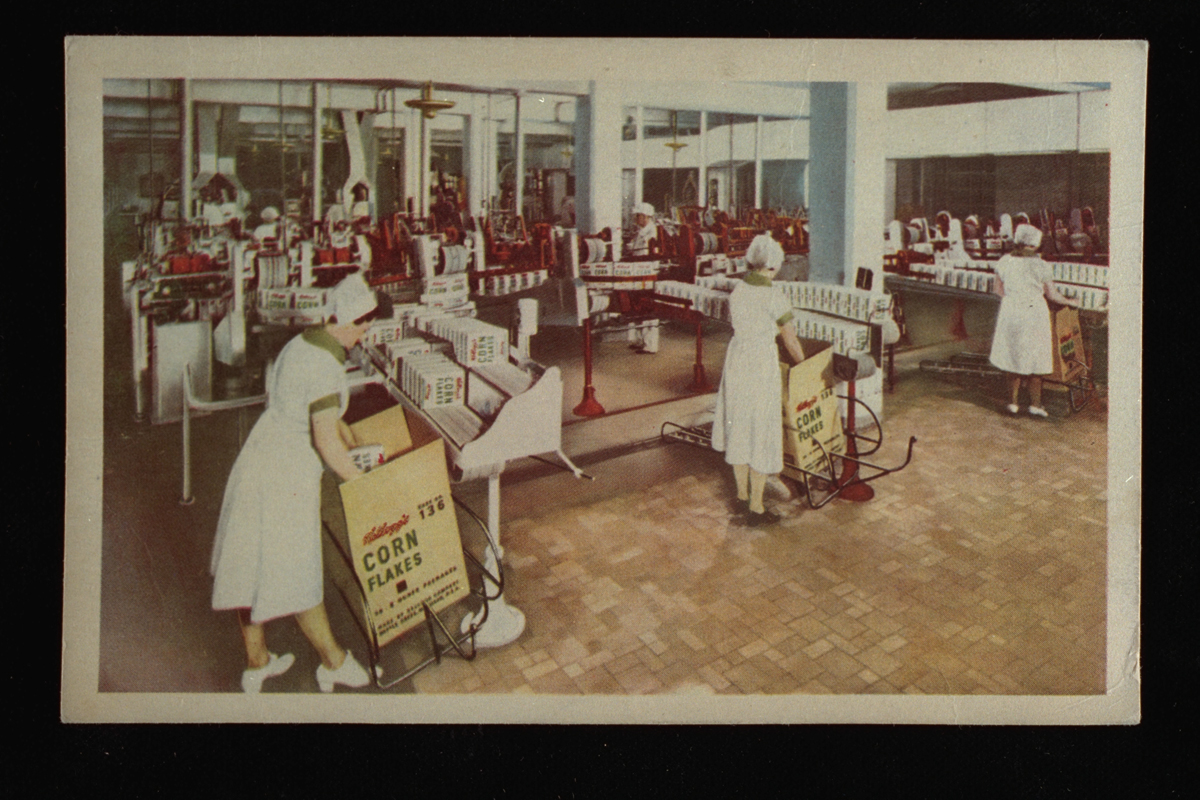 The true origin of corn flakes is difficult to trace, as competing versions of it have been offered by Dr. Kellogg’s wife Ella (whose dedicated assistance was integral to the San’s food operations), his brother Will, other family members, and San employees. All agree, however, that it started with Dr. Kellogg’s correct hypothesis that a grain-based cereal would be easier to digest if the grain’s starch was broken down through a pre-cooking process. (Ironically, nutritionists now agree that easy digestibility is less healthful than the slower-to-digest high-fiber cereals that are so popular today.) Hours of experimentation and a little accidental fermentation finally led to the creation of an easily digestible flaked cereal made of wheat. Patients at the San loved it and mail-order demand (usually by former patients) soon exceeded supply. Dr. Kellogg felt that he had accomplished what he had set out to do. 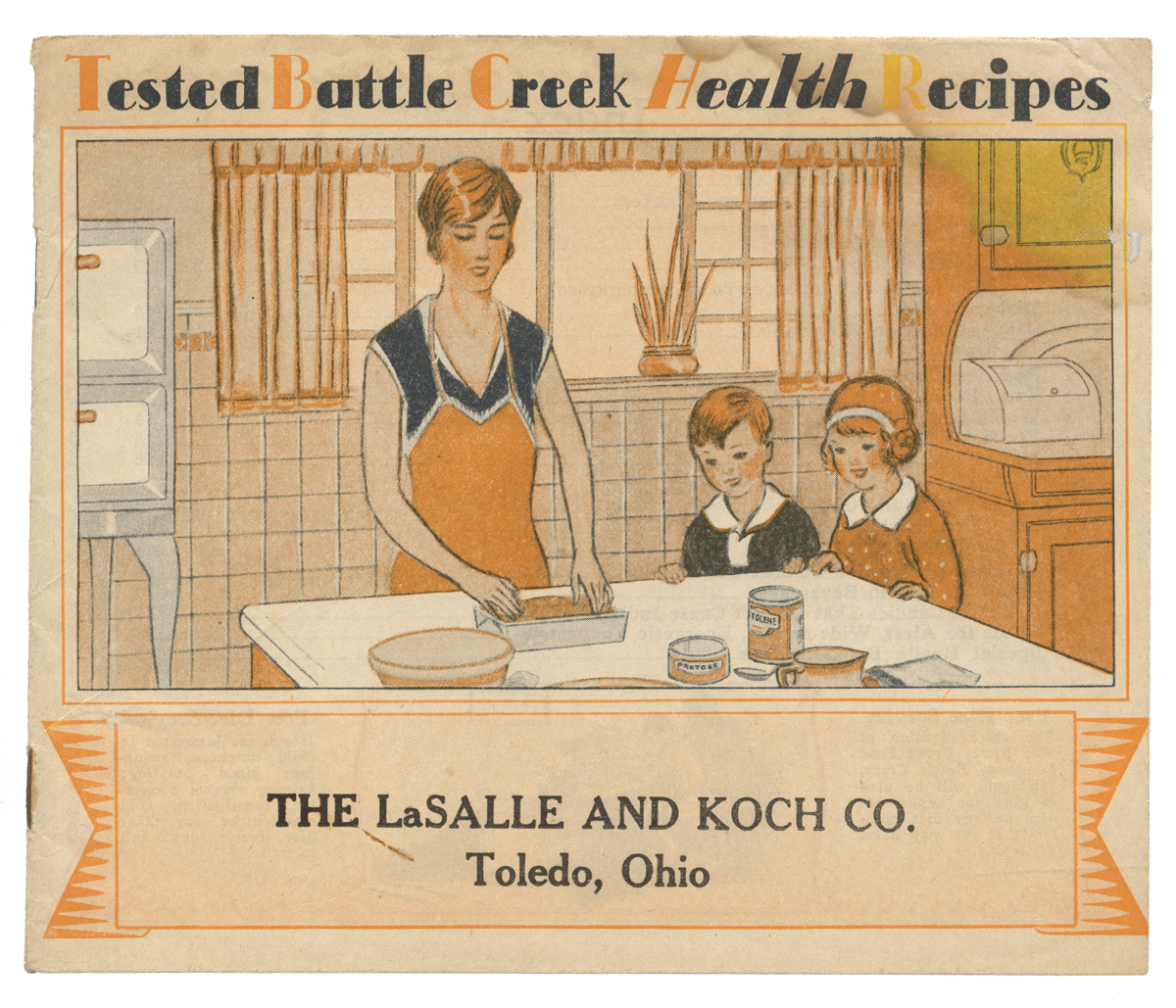 But his younger brother Will was far from done. Will saw a raft of competitors scrambling to introduce their own—often very similar—flaked breakfast cereals and making money off of their original idea. Whereas his brother, the doctor, was satisfied with continuing to produce healthy, nutritious foods for his niche group of patients, Will saw an opportunity to market a light, healthy breakfast cereal to a much larger public. After helping his brother rebuild the San following a devastating fire in 1902, he bought the rights to the flaked cereal and struck out on his own.

Will immediately made some changes to the initial cereal his brother was serving at the San. He replaced the wheat with cheap, plentiful, better-tasting corn, and added (to his brother’s horror) malt, sugar, and salt to make the cereal more palatable to the general public. In 1906, Will Kellogg founded the Battle Creek Toasted Corn Flake Company and the cereal we know today as Corn Flakes was born. 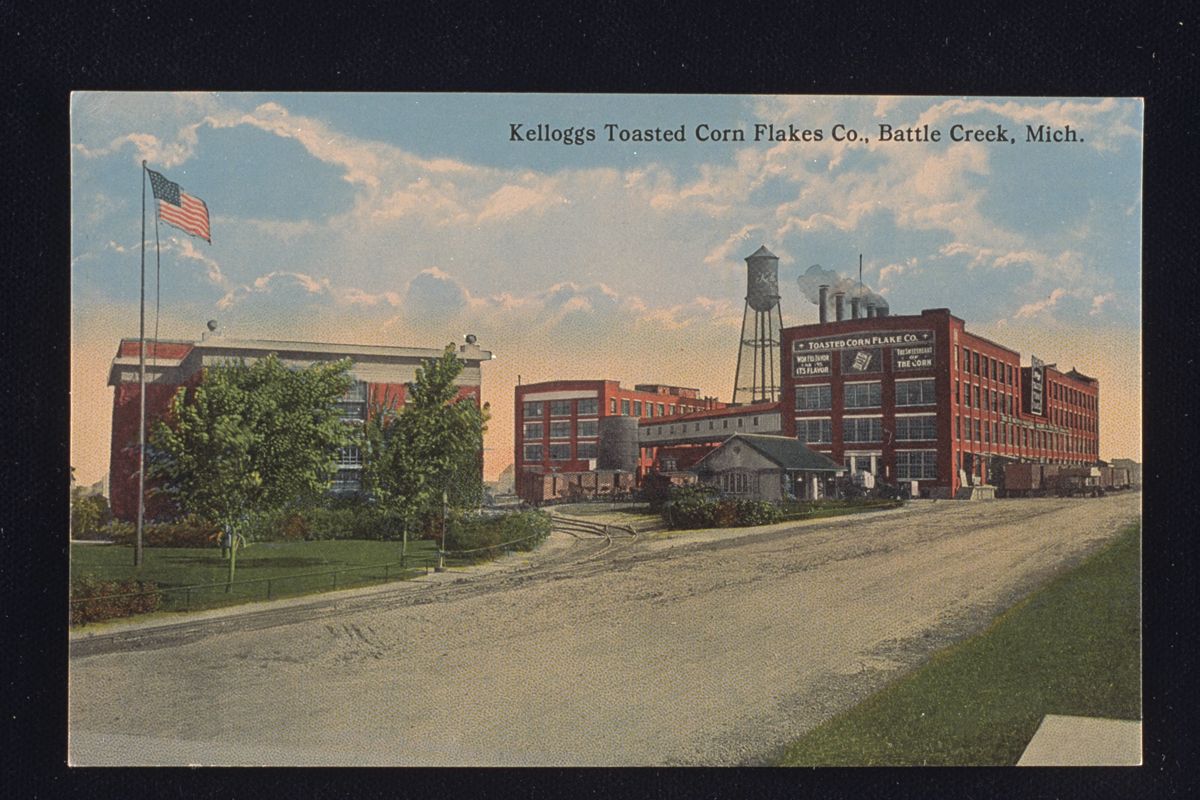 Will’s business acumen kicked in, as he embraced ever more sophisticated forms of advertising and packaging, as well as the most up-to-date machinery, factory practices, modes of communication, and distribution networks. By adding his signature to the front of each cereal box, he guaranteed the quality of his products to the public while also—once and for all—staking his claim to them. By 1909, the company was producing and shipping 120,000 cases of Corn Flakes every day! 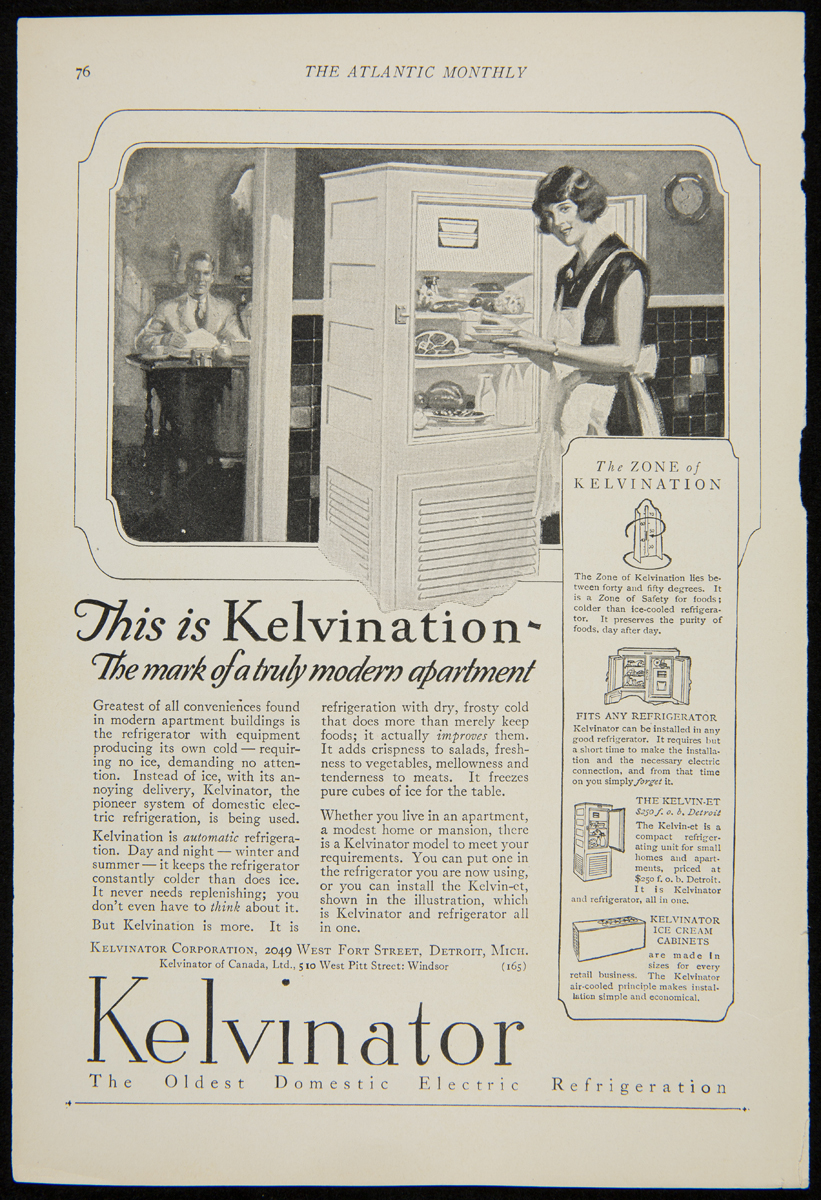 The popularity of dried cereal flakes for breakfast was in part due to improvements in both safe-to-drink milk and electric refrigerators (as shown in this 1925 ad, 2019.0.3.1) to keep the milk cold. THF290841

During Will’s active years of running the company—from 1906 to 1939—Kellogg’s became a national and ultimately global brand. These years also coincided with the growth of self-service grocery stores—in which name brand products and eye-catching packages were key to customer purchasing decisions. The success of Kellogg’s cereals was also aided by improvements in safe, pasteurized milk and the increasing popularity of electric refrigerators to keep the milk fresh. 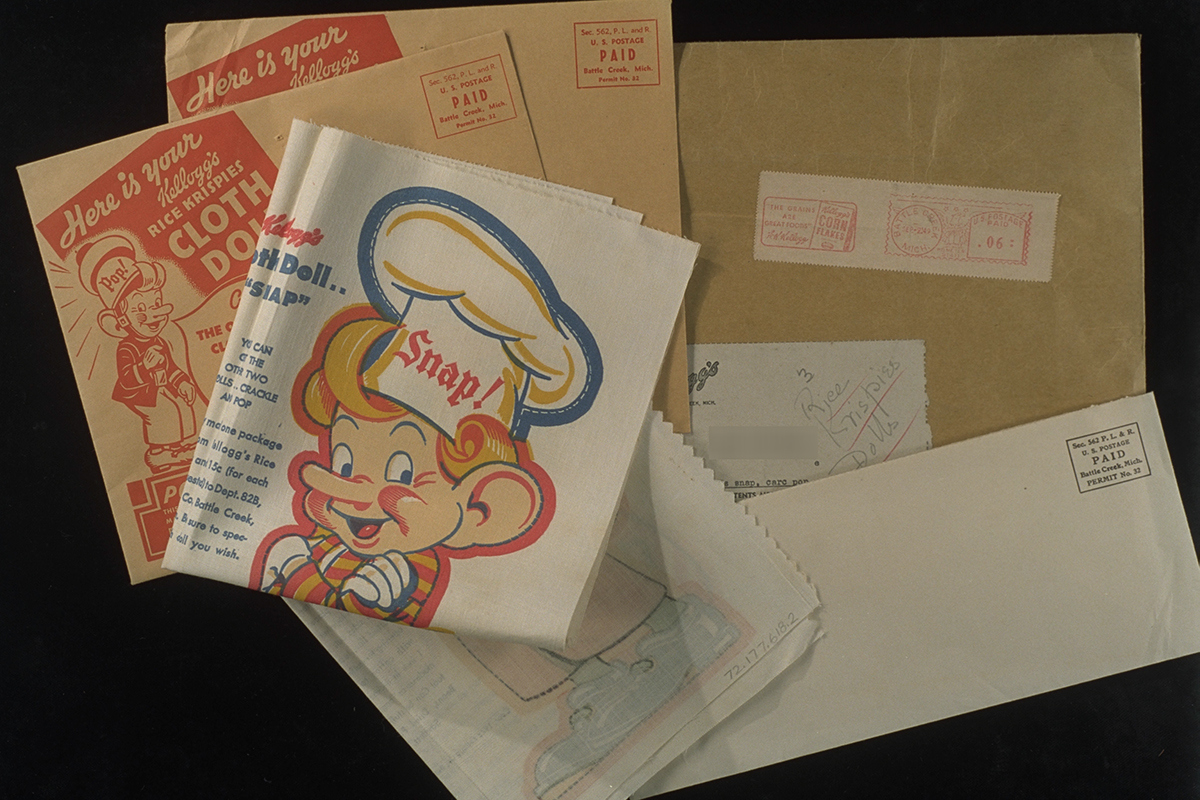 Through Will’s leadership, the company continued to embrace new methods of advertising—cereal box coupons and giveaways, catchy jingles and character logos, colorful print ads, recipe booklets, and radio advertising. By 1939, Kellogg’s controlled over 40% of the ready-to-eat cereal business in the United States and over 50% of the business outside the U.S. 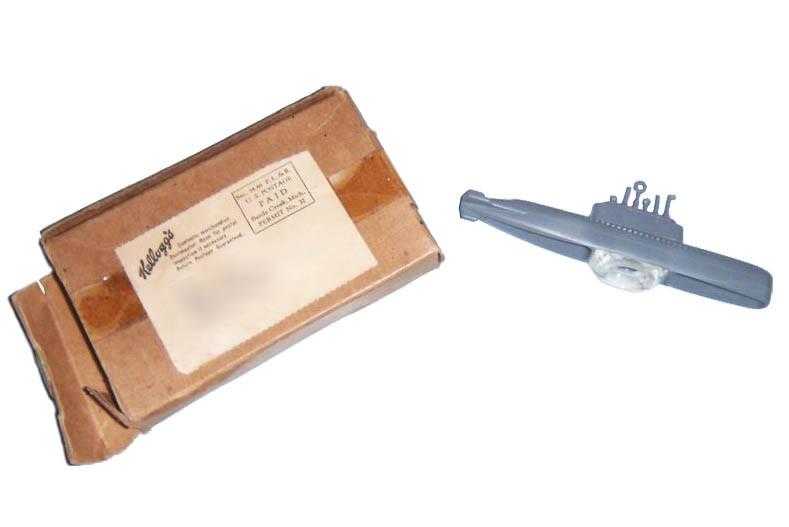 After Will stepped down, the company continued the aggressive marketing for which it had long been known. TV commercials and sponsorships replaced those previously on radio. Facing stiff competition from other cereal companies after World War II, Kellogg’s veered from its traditional reputation for healthful cereals and introduced a succession of sugar-loaded cereals for the new Baby Boomer market. Iconic new character logos helped promote them, like Tony the Tiger (introduced with Sugar Frosted Flakes in 1952) and Toucan Sam (introduced with Froot Loops in 1963).

The interest in “natural foods” in the 1970s and 1980s included healthful grains that, ironically, Kellogg’s had initially promoted—like those in the bran cereals featured as ingredients in this circa 1982 recipe booklet (92.256.9). THF296229

For Kellogg’s and other cereal companies, pre-sweetened and classic cereals would dominate the market during the 1950s and 1960s. But, in 1972, following a trend toward more “natural” foods, a little-known company named Pet, Inc., achieved breakout success with its Heartland Natural Cereal. Mainstream cereal companies scrambled to introduce their own versions of “natural” cereals, including Kellogg’s contribution, Country Morning Natural Cereal (1975–80). The trend toward more healthful and nutritious cereals brought Kellogg’s full circle back to its roots and continues to be popular today. 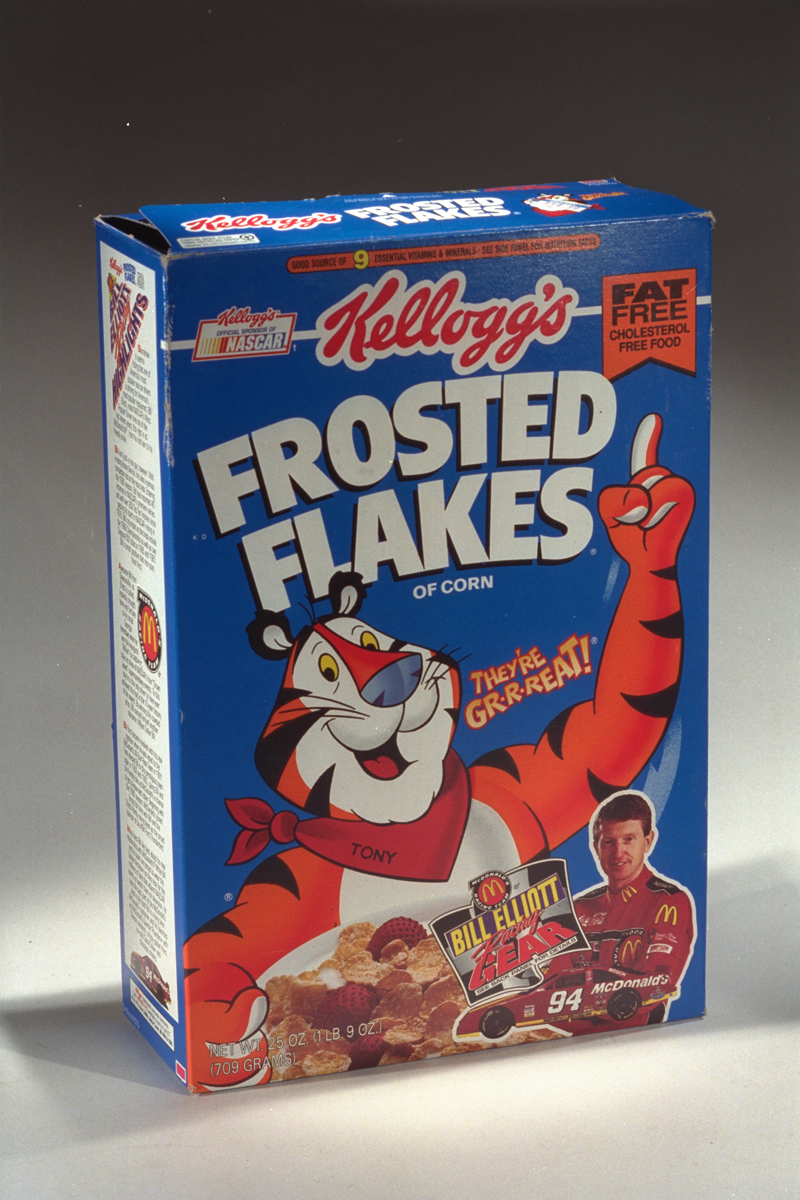 The front of this 1990s Frosted Flakes box (96.34.3.15) both features popular character logo Tony the Tiger and alludes to Kellogg’s sponsorship of NASCAR. In keeping with the times, this pre-sweetened cereal also claims to be fat-free, cholesterol-free, and include nine essential vitamins and minerals. THF302680

Too few people today recall the names of the two Kellogg brothers who started the breakfast revolution with their toasted flake cereal some 120 years ago. But it is impossible to ignore the legacy of their contribution. Through their lifetimes, Dr. J.H. Kellogg promoted healthful living, while his brother, W.K., convinced consumers that breakfast was the most important meal of the day. Meanwhile, the familiar character logos and advertising jingles for which Kellogg’s has long been famous remain in our heads and hearts.

For more reading, see: The Kelloggs: The Battling Brothers of Battle Creek, by Howard Markel (2017) and The Great American Cereal Book: How Breakfast Got Its Crunch, by Marty Gitlin and Topher Ellis (2011).