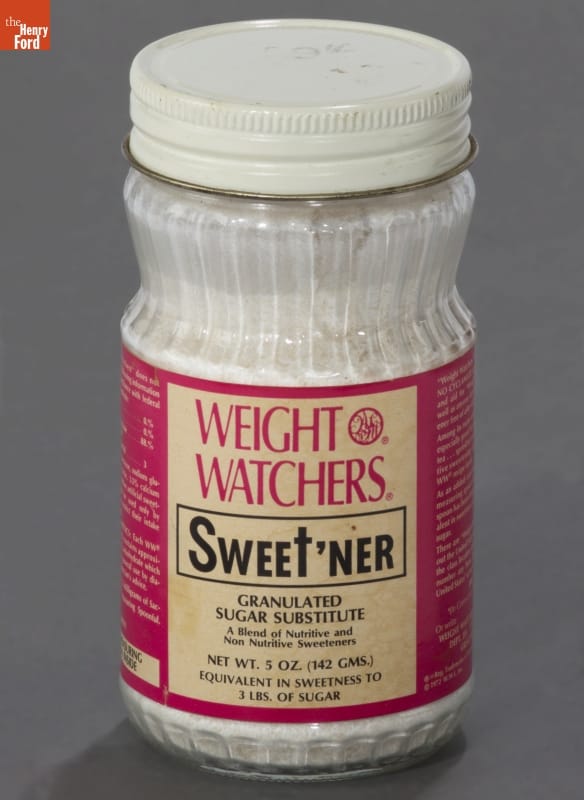 Weight Watchers was founded in 1963, by Jean Nidetch, an overweight, 40-year-old homemaker living in Queens, New York. Constantly struggling with dieting but never able to keep off her weight, she called up a few friends one day to come over and share their weight loss struggles. Within a short time, these meetings became so popular that she began to arrange support group meetings and realized that by sharing their stories and supporting each other, people were starting to change their eating habits. Al Lippert, a merchandise manager who lost 40 pounds through these weekly meetings, began to give Nidetch advice on how to organize and expand her activities and soon a four-person partnership was formed among Nidetch and her husband, Marty, and Al and Felice Lippert. In May 1963, Weight Watchers was incorporated and opened for business in Queens, New York.

This jar of “Sweet’ner” mostly contained saccharin. The 1972 Weight Watchers program did not permit the consumption of sugar (except in “legal” recipes) and, instead, promoted the use of its artificial sweetener in all recipes, dishes, and beverages. The promise of this simple-to-use, calorie-free product helped bring new members into the program. At the same time, Weight Watchers introduced a new line of artificially sweetened foods and sodas. 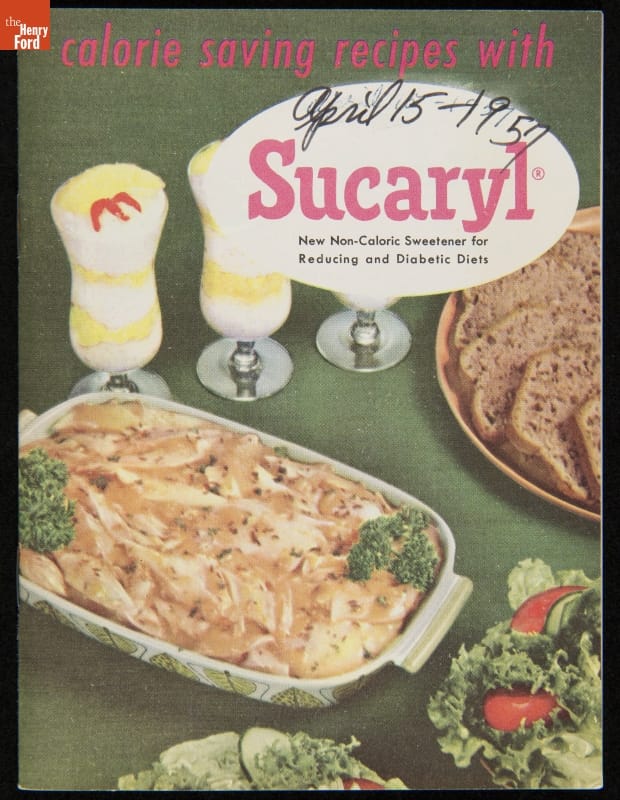 Synthetic sweeteners have always seemed like miracle foods. The promise of a calorie-free treat or drink has had a stronger pull than the health and safety risks that might accompany them (such as causing cancer or possibly actually encouraging weight gain).  This is why it seems that, as soon as one sweetener is declared dangerous, the next big sweetener is just around the corner. Saccharin, accidently discovered in 1897 by a Johns Hopkins University researcher, was the first widely used artificial sweetener. But some thought it to be dangerous and toxic. The introduction of a sweetener called cyclamate, discovered 1937, replaced it in popularity and it coincided with the diet soda boom of the 1950s and 1960s.  But the use of cyclamates came to a halt when it was banned by the FDA in 1969, as it was found to cause cancer in rats. Saccharin, by then popular in Sweet ‘n’ Low, was banned in 1981 for its cancer-causing risks but it was unbanned in 2010 in more than 100 countries, including the United States. Meanwhile, other non-caloric sweeteners became popular, including Aspartame (used in NutraSweet and Equal) and Sucralose (used in Splenda). Each of these came with health and safety risks.

Despite competition, food fads, and uneven business expansion efforts, Weight Watchers has maintained its dominance in the weight loss business and, through continual refinement and addressing consumer needs, remains as popular as ever.