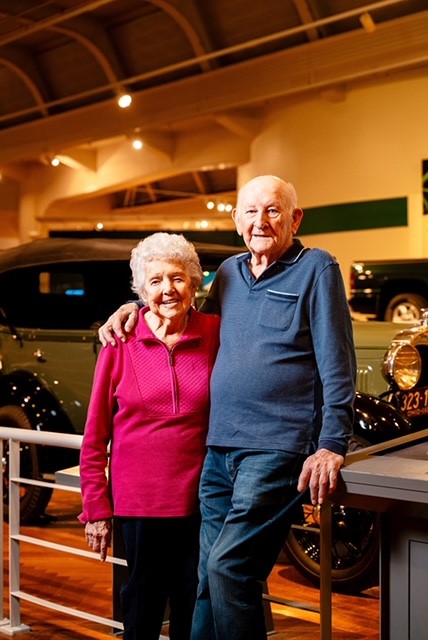 When you’re in your mid-90s, finding a climate-controlled space where you feel comfortable getting in a bit of physical fitness may be difficult. That’s why you’ll find John Henry and Beatrice Marie “Peggy” Rendzio at Henry Ford Museum of American Innovation almost every day around 10-10:30 a.m. Members of The Henry Ford for a quarter of a century, the Rendzios are longtime regulars with The Henry Ford’s museum walkers, a cherished group of old and young who use the museum’s perimeter and winding exhibit pathways to exercise and socialize. Danette Fusco, with The Henry Ford’s Guest Services team, sees the Rendzios often. “Like clockwork, this charming couple visits to get their daily exercise and socialization,” she said. “They are truly an inspiration.”

Their must-do:
Walking in Henry Ford Museum of American Innovation.

Their favorite member perk:
“We walk almost every day in the museum,” said John Henry. “We know the security guards and lots of the staff. And after we’re done walking, we can stop in at Plum Market for a coffee and sometimes a cookie.”


What’s your spark? Let us know what inspires you on your next visit and what takes you forward from your membership. Email us at membership@thehenryford.org. Take it forward as a member—enjoy benefits like free parking, discounts on events and tours, exclusive member previews, and more.

This post was adapted from an article in the forthcoming June-December 2021 issue of The Henry Ford Magazine.