For centuries in America, Black history has been relegated to the margins, with stories of Black lives only recorded by those who had the means or the motivation—or perhaps the hope that future generations would value them. The second-class treatment of Black history, the result of entrenched sociocultural discrimination, is painfully obvious to historical professionals looking to the written record for answers about the past lives of Black Americans.

While a major discrepancy still exists between the quality and quantity of Black historical records when compared to white counterparts, scholarship and re-examination, aided by new technologies, have helped in making new and old information alike more accessible. With barriers to information accessibility lessened to some degree, assembling these pieces of information into individual stories remains the biggest and most puzzling challenge. A prime example of this challenge can be found in the analysis of a document from The Henry Ford’s Digital Collections—an 18th-century apprenticeship contract. 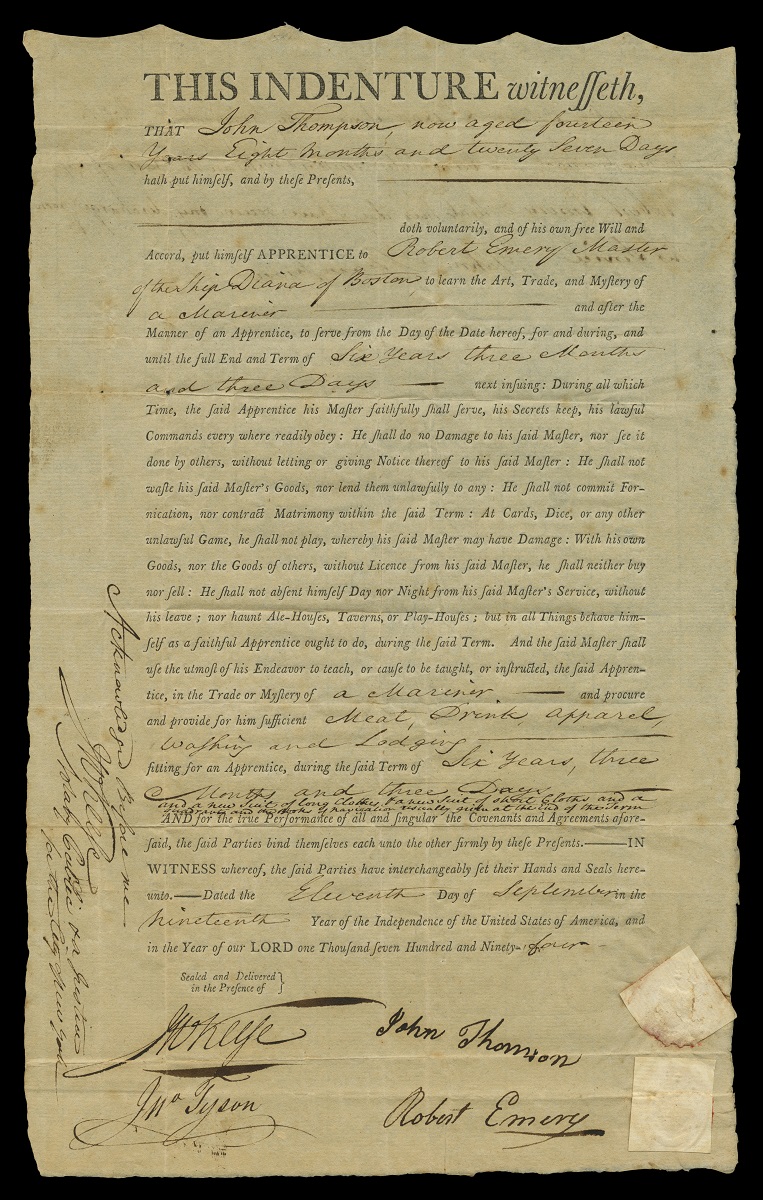 This apprenticeship document was gifted to Henry Ford in 1928 by William Van Rensselaer Abdill of Titusville, New Jersey. Abdill was a well-known collector whom Ford and others called upon to locate certain objects from history. This item was most likely part of a larger document collection that Abdill had amassed. / THF129623

On the surface, this apprenticeship document shows no indications of being related to Black history, but a careful examination proves otherwise. To start, there’s a name, “John Thompson” (or “John Thomson,” as signed at the bottom); there’s an age, “fourteen years, eight months, twenty-seven days”; and there’s a date, September 11, 1794. Other information from the document tells us that John Thomson was from Salem, Massachusetts, and was apprenticing to be a “mariner.” A careful sifting of this information through genealogical resources reveals that in May of 1809, this same John Thomson applied for a Seamen’s Protection Certificate. The application confirmed Thomson’s birth in 1780 in Salem, Massachusetts, and described him as a “negro, born-free.” 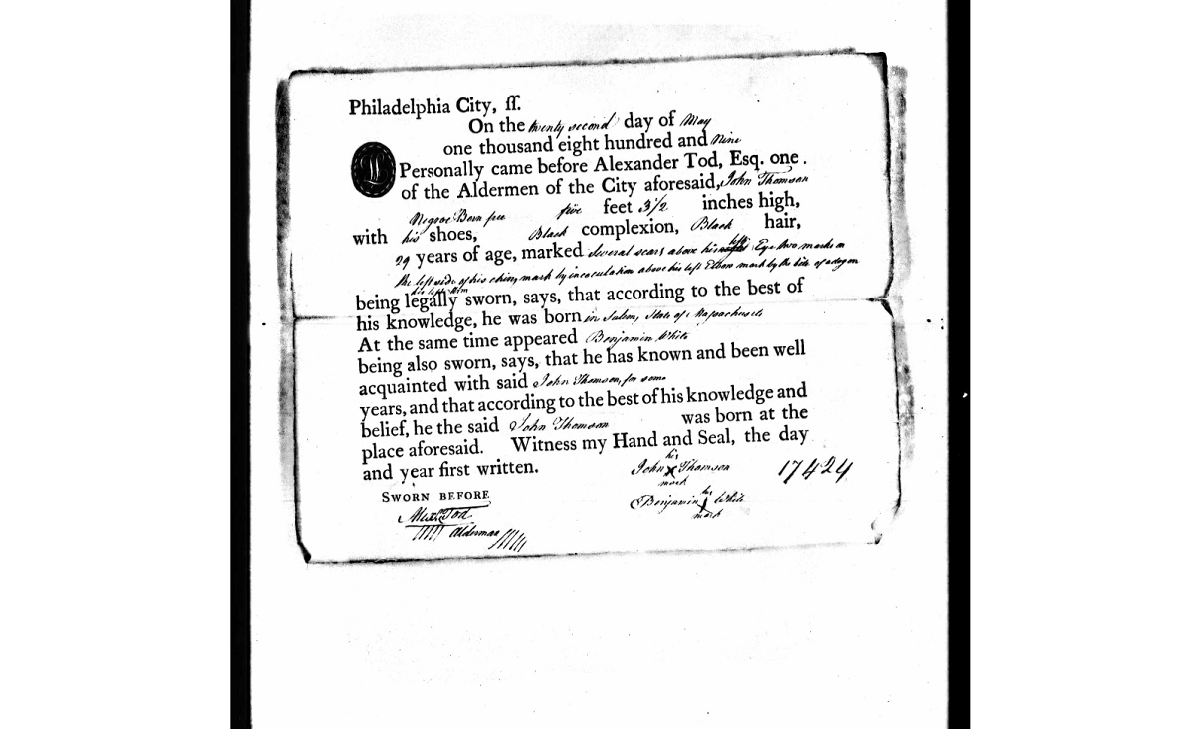 John Thomson’s application for a Seamen’s Protection Certificate included identifying information. The document states he was about five feet, three inches, in height and had several scars above his left eyebrow, as well as a scar from a smallpox inoculation on his left elbow and marks from a dog bite on his left arm. / Citation: The National Archives and Records Administration; Washington, D.C.; Proofs of Citizenship Used to Apply for Seamen's Certificates for the Port of Philadelphia, Pennsylvania, 1792-1871

Further historical context helps illuminate John Thomson’s life and experiences. During the “Age of Sail,” when global commerce was facilitated by sailing ships, the city of Salem, Massachusetts, was a bustling international port. In the centuries before Thomson’s apprenticeship, slavery played a major role in Salem’s maritime economy, not only in the city’s involvement in the slave trade, but in the lives of those who worked its ships and docks. Even after Massachusetts became the first state to abolish slavery in 1783, slavery’s discriminatory legacy continued. As one of the few occupations open to them, free Blacks found life on the sea as a sailor to be a more integrated and less racially tense working environment. In port cities like Salem, these kinds of employment opportunities helped lay the foundation for Black communities in the early years of America.

John Thomson’s 1794 contract also reveals clues about how the then-14-year-old spent the next six years of his work life apprenticed to Captain Robert Emery on the ship Diana. Information on the ship and its captain (in contrast to Thomson) is plentiful. We know that the Diana was built in 1790 up the coast in Amesbury, Massachusetts, and was used to carry trade with Europe. Sometime in 1793, a change of ship masters occurred in New York City and the Diana was transferred to Emery, who was merely 20 years of age at the time. 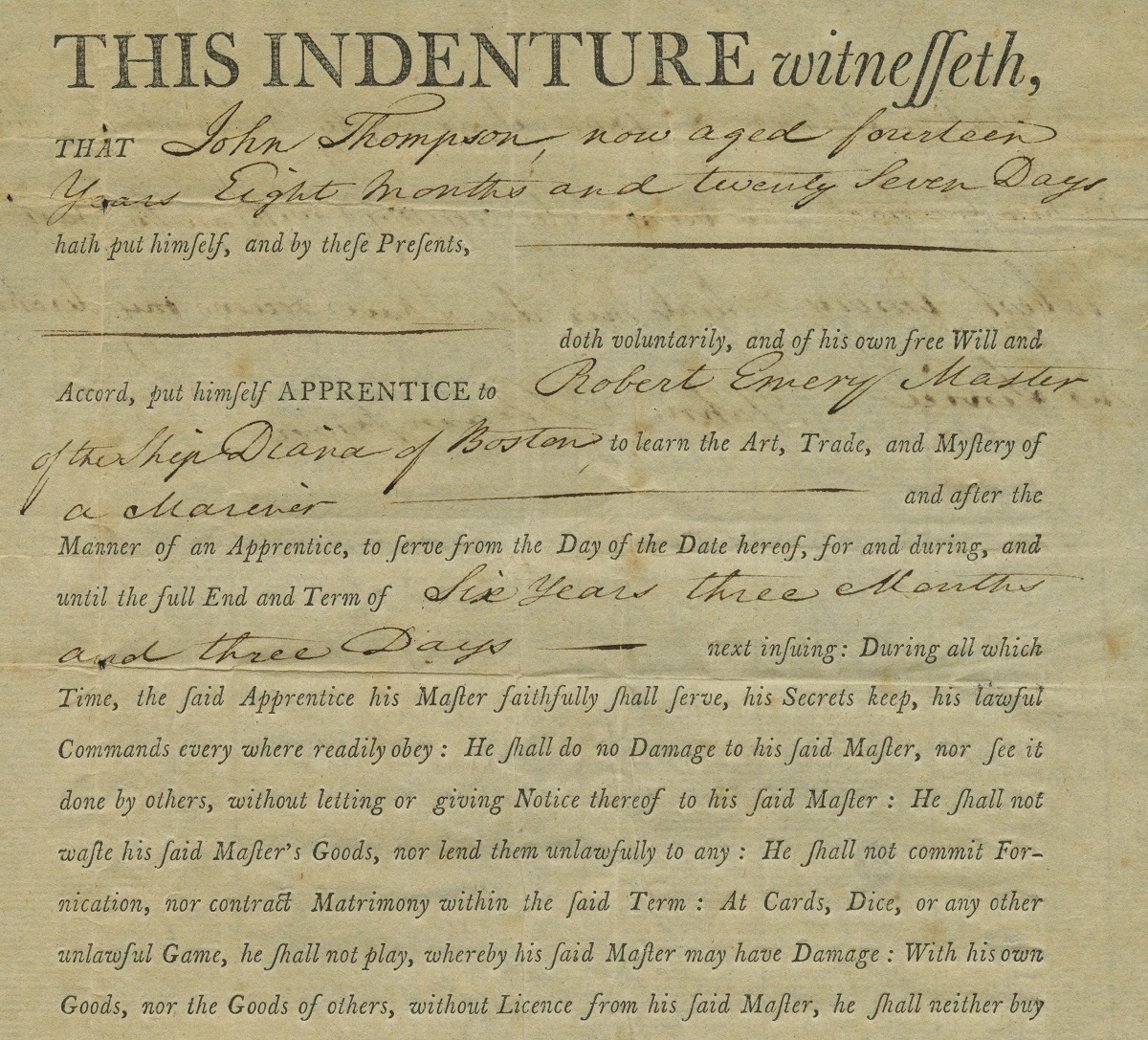 Information from the first part of the document tells us that Robert Emery was the master of the ship Diana (whose owners were based in Boston), and that John Thomson’s apprenticeship would last just over six years. / THF129623, detail

In 1794, Emery was hiring a crew for an upcoming trip to Bristol, England, and needed an apprentice. Apprenticeships were standard in a variety of trades during this period of American history. Usually, a boy of about 13 or 14 would be indentured to a master until he reached the age of 20 or 21. In return, the master would provide food, clothing, shelter, and, most importantly, training. For Black adolescents like John Thomson, whose opportunities were limited, a stable source of food, clothing, and training could be life changing. Racially integrated crews were common for ships sailing out of Northern port cities. In 1805, five years after Thomson’s apprenticeship ended, Emery hired another racially integrated crew to sail out of Salem for India aboard the vessel Golden Age. Among the group were two local Black men: a “first mate” (next rank under captain) and a “boy” (another name for an apprentice).

As part of the agreement, John Thomson would be provided “meat, drink, apparel, washing and lodging” during his apprenticeship. / THF129623, detail

Threats abounded for Black sailors when John Thomson agreed to his apprenticeship contract in 1794. A year earlier, the 1793 Fugitive Slave Act was passed, giving slaveholders the right to recover an escaped slave. Abuse of the law began immediately, as it offered no procedural protections for free Blacks to avoid being seized as slaves—no right to a lawyer or a trial by jury, or even to speak on their own behalf. Furthermore, the British were struggling to staff a massive navy and actively forced thousands of unwilling American sailors into service. In an effort to stop illegal impressment by the British, Congress began issuing Seamen’s Protection Certificates in 1796, which worked as identification papers and proof of a sailor’s American citizenship. These kinds of papers would have been doubly important to Black sailors who were also under constant threat of being enslaved.

In the years preceding Seaman’s Protection Certificates, around the mid-1780s sailors began carrying papers that helped prove their identity. These could have been copies of parish or town records or a notarized statement by a reputable person who could attest to the bearer’s American citizenship. Notarizing this apprenticeship document, most likely Thomson’s only proof of identification, would have been vitally important. The writings along the side of the document speak to this, as they show that this document was notarized by John Keese of New York City—a notary public, attorney, and founding member of the New York Manumission Society. As New York was a major port city, it’s likely Thomson would have been there at some point, and while the Manumission Society played a paternalistic guardian role in lives of New York’s slaves and free Blacks, it would have been one of the only groups advocating for Black rights in general. For free Blacks like John Thomson, having Keese’s name on the document carried weight if anyone questioned his identity. 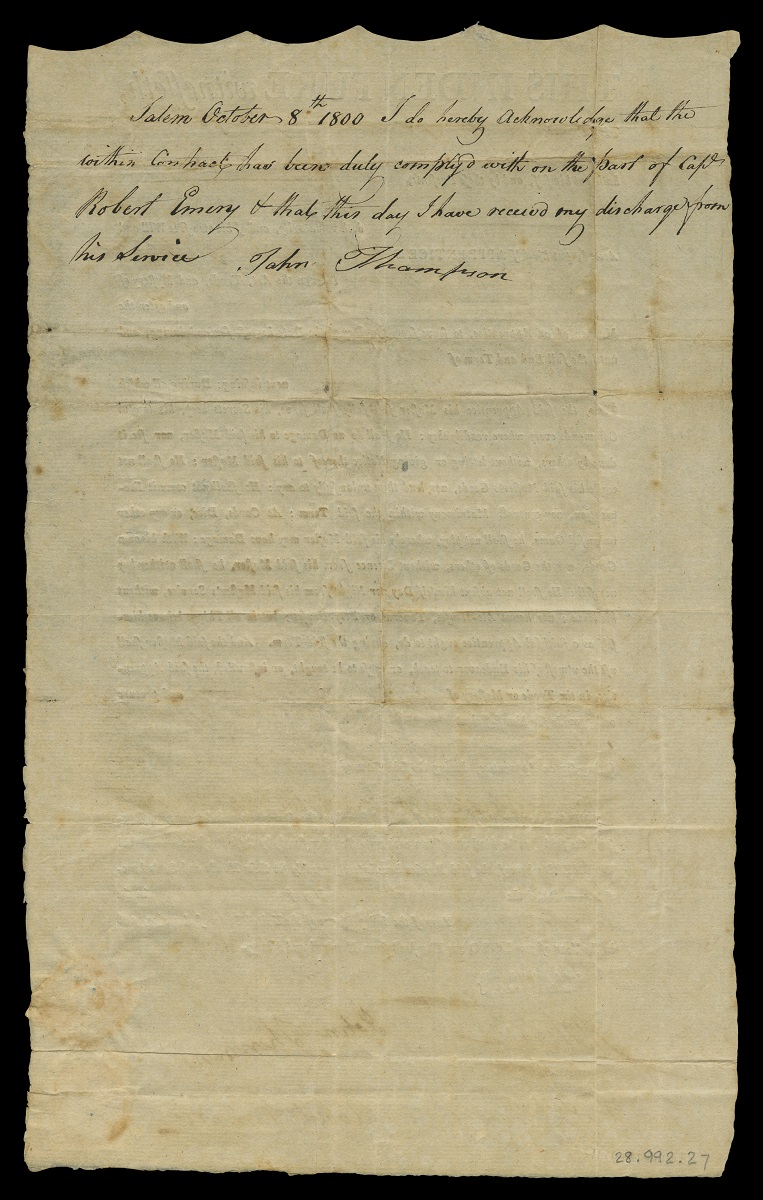 The reverse side of the agreement confirms Thomson finished his apprenticeship in Salem on October 8, 1800. / THF129624

We know little about Thomson’s time on the Diana, except for the fact that at some point in the late 1790s, Emery armed the ship for protection against the French. According to the reverse of the contract, Thomson’s apprenticeship ended in Salem in 1800. Details about the remainder of Thomson’s life and career remain lost (or at least very well hidden) to history—whether or not he had a family (some sources suggest he married Violet Wilkins in 1817), if he joined fellow Black sailors in defending the nation during the War of 1812, or even when he died. What has endured though, are the pieces of information that provide enough clues to tell a meaningful part of Thomson’s story—and offer an important lens into the lives of early Black Americans.


Ryan Jelso is Associate Curator, Digital Content, at The Henry Ford. He would like to point out that numerous digital resources were used in the researching of this blog—from genealogical resources like Ancestry.com and academic resources like JSTOR, to the digitized collections of many other institutions.