"Veterans of the Late Unpleasantness": A Brief History of the Grand Army of the Republic 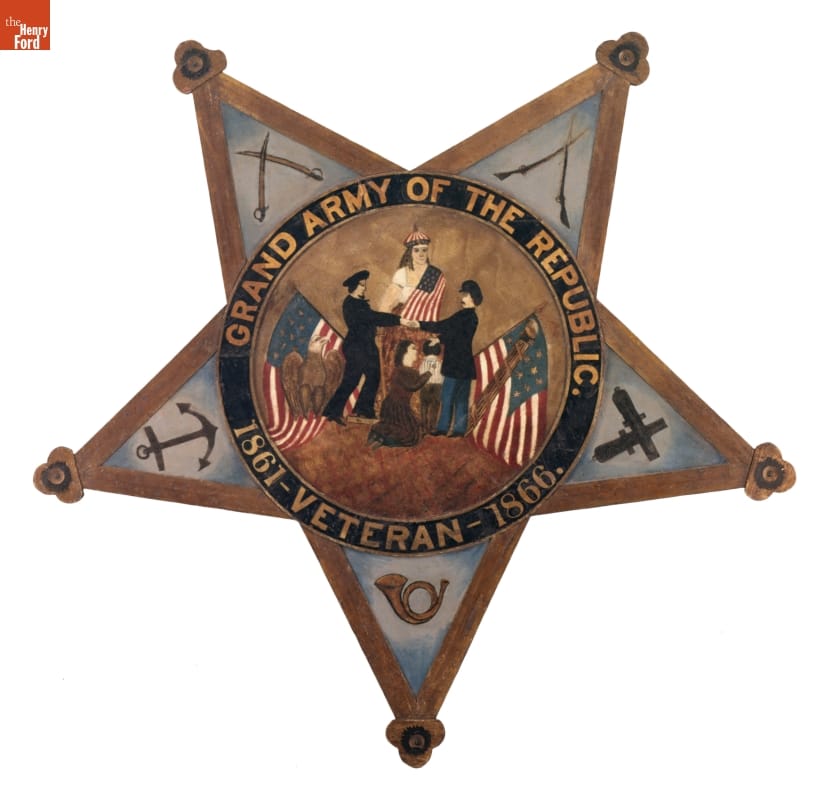 Following the end of the Civil War, numerous fraternal veterans’ societies were formed. These societies enabled veterans to socialize with individuals who had similar experiences and also allowed them to work towards similar goals.

Dr. Benjamin Franklin Stephenson formed the Grand Army of the Republic (G.A.R.) for all honorably discharged Union veterans on April 6, 1866, in Decatur, Illinois, and it quickly grew to encompass ten states and the District of Columbia. The G.A.R.’s growth was astronomical, peaking in the 1890s with nearly 400,000 members spread out through almost 9,000 posts in all 50 states, as well as a few in Canada, one in Mexico, and one in Peru. These posts were organized into departments, which were typically divided by state, but could include multiple states depending on the population of Union veterans in the area. 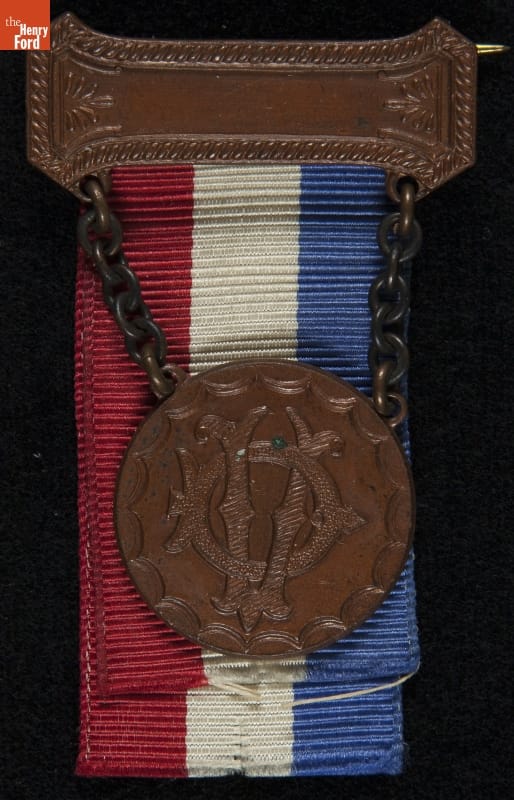 Daughters of Union Veterans of the Civil War Membership Badge, circa 1900 / THF254033

The tenets of the G.A.R. were “Fraternity, Charity, and Loyalty,” and are depicted in the seal of the G.A.R.  The fraternity aspect was met by fraternal gatherings such as meetings, as well as annual reunions known as encampments at the departmental and national level. Charity was demonstrated through fundraising for veterans’ issues, including welfare, medical assistance, and loans until work could be found, as well as opening soldiers’ and sailors’ homes and orphanages. Loyalty was demonstrated in several ways, including erecting monuments, preserving Civil War sites and relics, donating cannons and other relics to be displayed in parks and courthouses, and donating battle flags to museums. The G.A.R. was assisted in all of their work by their auxiliary organizations, known as the Allied Orders of the G.A.R.: the Women’s Relief Corps, Ladies of the Grand Army of the Republic, Sons of Union Veterans of the Civil War (SUVCW), the Auxiliary to the SUVCW, and the Daughters of Union Veterans of the Civil War—all of which are still active today. 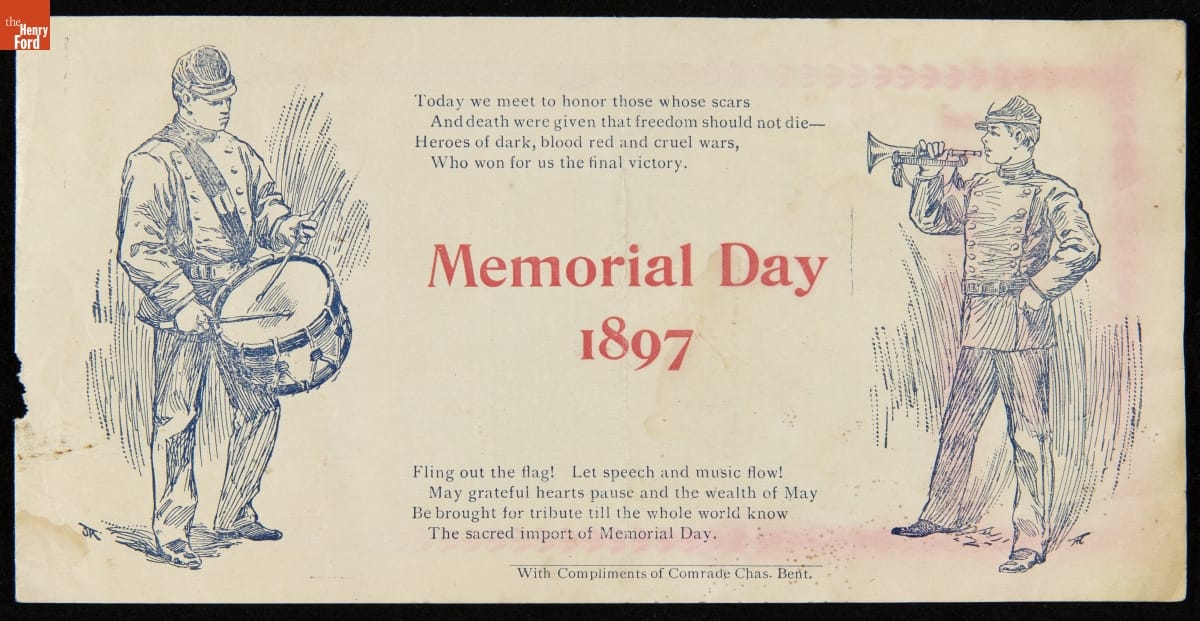 Additionally, the G.A.R. was instrumental in having the tradition of memorializing the dead and decorating their graves recognized as the federal holiday Memorial Day, formerly known as Decoration Day. From its origins in smaller, localized observances throughout the country, it gained national recognition after Commander-in-Chief General John A. Logan issued a proclamation on May 30, 1868. Programs like the one above detail the order of events of these celebrations, and some even detail how to appropriately contribute. 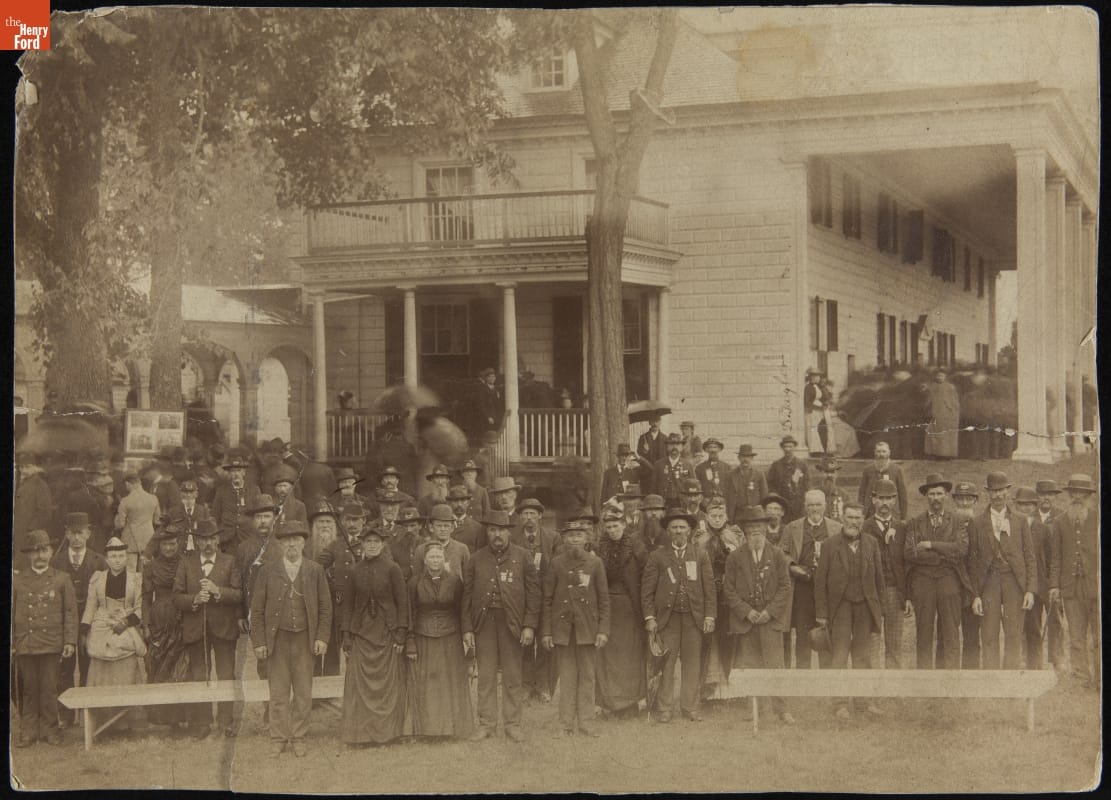 The annual and national encampments were not just big events for the G.A.R. and the Allied Orders of the G.A.R, but also for the railroads and cities in which the encampments were held. Railroad companies, such as the Maine Central Railroad Company, advertised the encampments and offered round-trip tickets to attendees. A typical schedule of events for encampments included speeches, business meetings where delegates voted on resolutions and other organizational business, receptions for the G.A.R. and the Allied Orders, parades reminiscent of the Grand Review of the Armies following the end of the Civil War, campfire activities, concerts, outings to nature or historic points of interest, and reunions of other groups, including regimental and other veteran organizations. Attendees to the 1892 Washington, D.C., National Encampment were able to visit Mount Vernon. 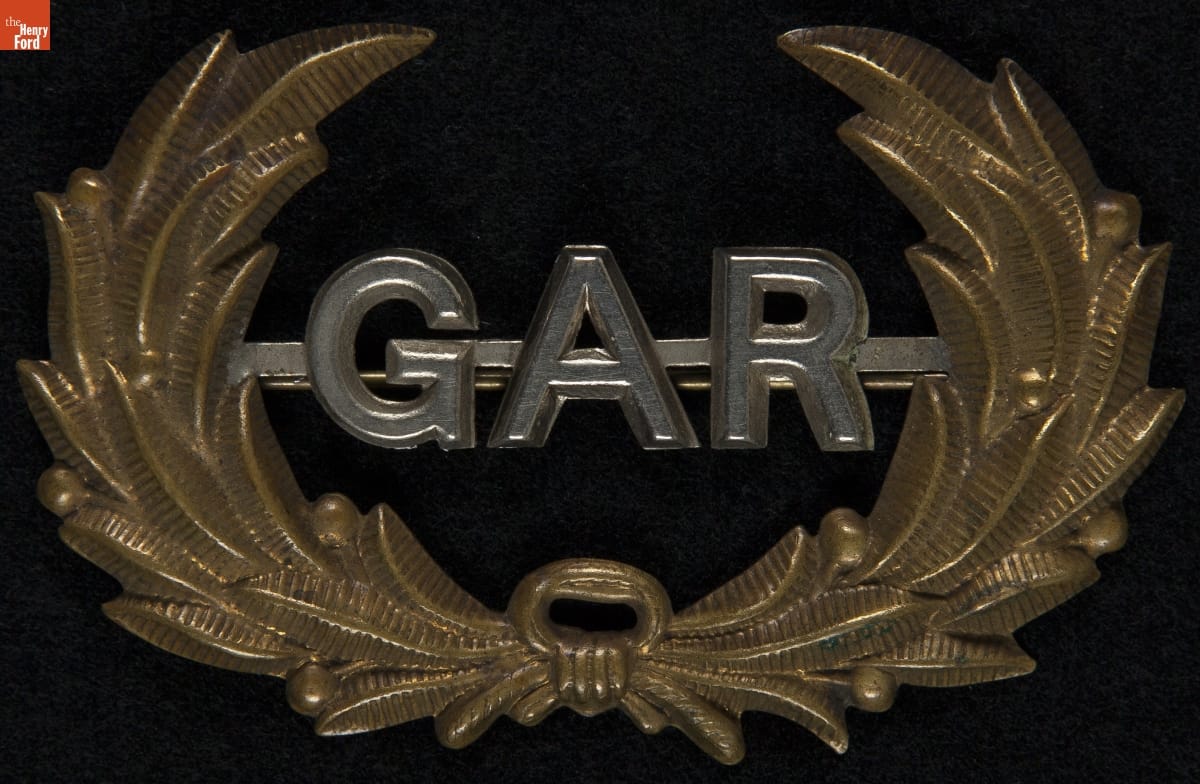 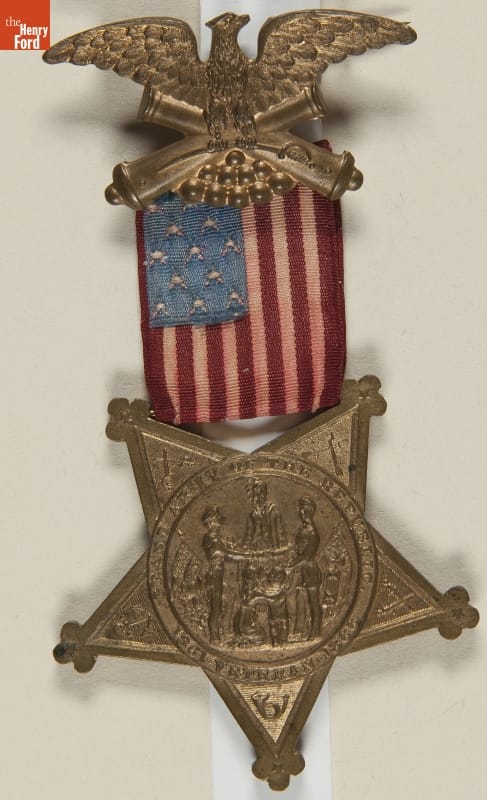 Members would show up in their uniforms, which often included hats with G.A.R. insignia, as well as their G.A.R. membership badge, an example of which can be seen above. Membership badges denoted the wearer’s rank at the time they mustered out and would also show what rank within the G.A.R. they held; Commander-in-Chief badges would be substantially more ornate.

In addition to their membership badges, attendees would also represent their home state, posts, or departments with ribbons or badges stating where they were from. An example is the Forsyth Post badge used at the 1908 Toledo, Ohio National Encampment. These ribbon badges are all unique to the host city—for instance, Detroit’s national encampments’ badges featured an image of Antoine de la Mothe Cadillac sailing to Detroit, signifying the city’s founding in 1701; national encampments held in California typically featured a grizzly bear, like their state flag; Denver’s 1905 National Encampment featured a cowboy on a bucking bronco; and Holland, Michigan’s 1904 and 1910 Annual Encampments featured wooden shoes and windmills.

Badges help tell the story of the G.A.R., and make these events more relatable to modern audiences—who hasn’t bought a souvenir on vacation or at an event? Beginning in 1882, The G.A.R. produced official souvenir badges for purchase in addition to the membership badges. Some of these souvenirs were made from captured Confederate cannons authorized for destruction by acts of Congress. In the case of the G.A.R., badges were so important that in the 50th Congress, 1st Session, a bill (Report No. 784) was passed to “prevent the unlawful wearing of the badge or insignia of the Grand Army of the Republic or other soldier organizations.”

Watching the highly decorated G.A.R. members march in the parade was a sight that drew many thousands of spectators wherever the encampments were held. The members would have likely marched in their G.A.R. uniforms, which included a double-breasted, dark blue coat with G.A.R. buttons and a hat (either kepi or slouch felt) with G.A.R. insignia. Other uniform pieces, such as leather gauntlets with G.A.R. insignia, are known to exist, but they do not appear to be commonplace. As they had done in the Grand Review of the Armies, they would march with their flags. In 2013, one such flag was conserved by The Henry Ford, as documented in this blog post: “Conserving a G.A.R. Parade Flag.” 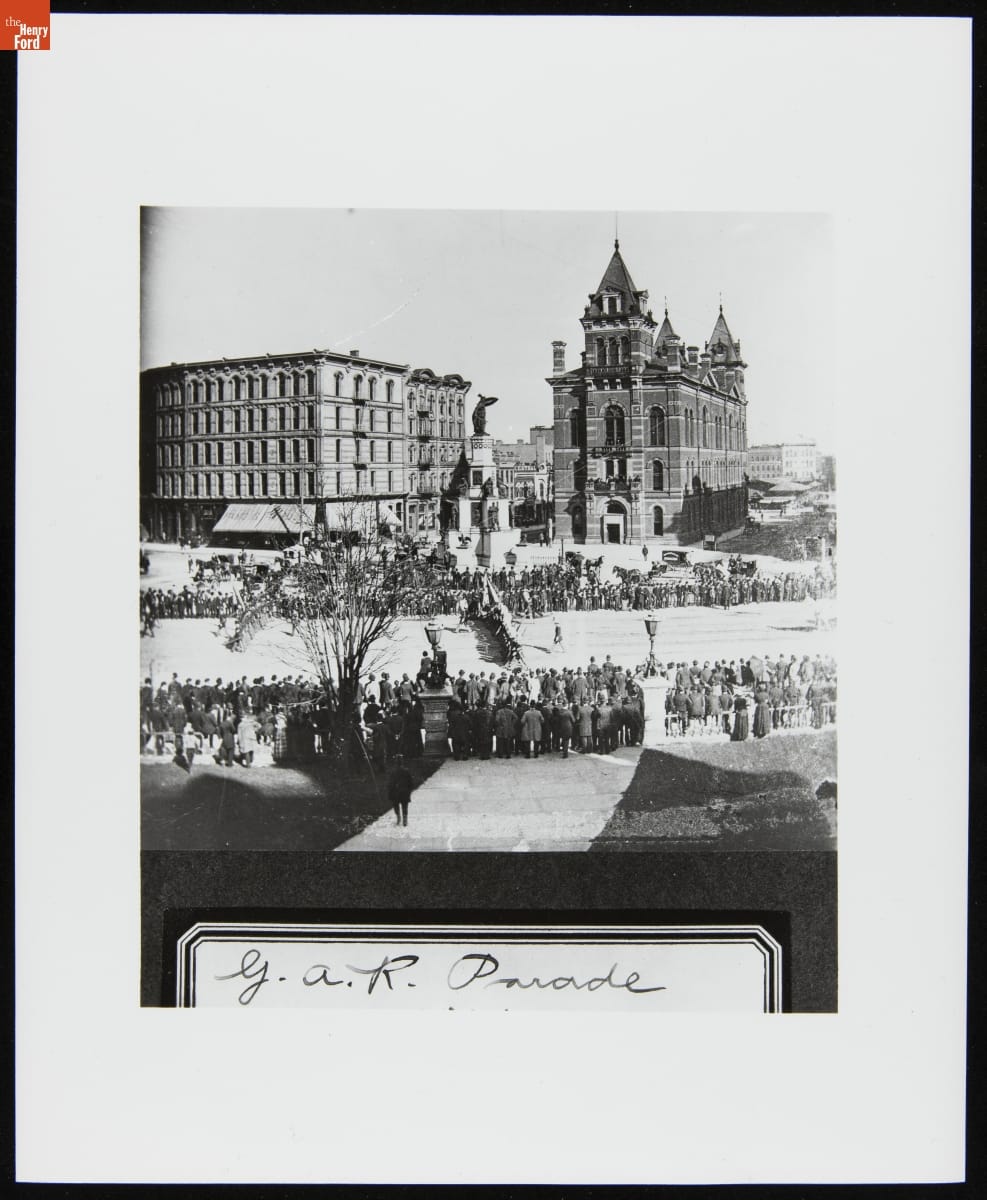 As the G.A.R. members aged, the number capable of walking an entire parade route dwindled, but luckily for them, the rise of the automobile ensured that they could still participate. For veterans who did not take their personal automobiles to the encampments, calls were sent out to round up enough vehicles to provide each veteran with a car for the parade. In the case of the 1920 Indianapolis National Encampment, John B. Orman, Automobile Committee Chairman, sought to get enough automobiles for all of the veterans requiring them and said “The ‘boys’ of ’61 are no longer boys. Today the distance from the monument erected to their memory to Sixteenth Street is longer than the red road from Sumter to Appomattox.” Local dealerships loaned their cars for the parade, much like today’s parade sponsors sending cars or attaching their names to floats in parades.

At the 83rd and final G.A.R. National Encampment, held in Indianapolis, Indiana, in 1949, six of the last sixteen G.A.R. members not only made the trip to Indianapolis but were able to “march” in the final parade—thanks to the automobile.

Joseph Clovese, one of the six to have participated in the final parade, can be seen with fellow G.A.R. members adorned with their G.A.R. badges on his Find a Grave page. Clovese was born into slavery on a plantation at St. Bernard Parish, Louisiana, in 1844. He joined the Union Army during the siege of Vicksburg as a drummer boy, and then later became an infantryman in the 2nd Missouri Colored Infantry Regiment (later the 65th U.S. Colored Troops Regiment). Following the war, Clovese worked on riverboats on the Mississippi River and assisted with the construction of the first telegraph line between New Orleans, Louisiana, and Biloxi, Mississippi.

Clovese received a citation and medal at the “Blue and Gray” reunion, the 75th anniversary of the Battle of Gettysburg in 1938. At age 104, he moved to Pontiac, Michigan, with his niece, and, according to his obituary in the New York Times, he would take daily walks and was hardly ever ill. He died July 13, 1951, in the Dearborn Veterans Hospital at the age of 107. More information about his long and fascinating life, as well as additional photos of him wearing his G.A.R. badges, can be seen in his Fold3 Gallery.

The G.A.R. officially dissolved in 1956 with the death of the last member, Albert Woolson, but the spirit of the organization lives on through the Allied Orders of the G.A.R.

For additional looks at the G.A.R., check out the other G.A.R. artifacts in our Digital Collections and read a past blog post, “Fraternity, Charity, Loyalty: Remembering the Grand Army of the Republic.”


Laura Myles is Collections Specialist at The Henry Ford.