Western Interactions with East Asia in the Decorative Arts: The 19th Century

Western Europe and its former colonies in the Americas were long fascinated with the Eastern cultures Europeans depicted as “mysterious”—specifically their exotic and luxurious trade goods. This is the second of two blog posts that examine this European and American fascination with Asia and the way that was expressed in the decorative arts. In the first post, I discussed the China trade in the 17th and 18th centuries, specifically Chinese export porcelain and the related tea trade. This post focuses on the 19th century, with the decline of the China trade, the opening of Japan to the West, Western eclecticism in the decorative arts, and the beginning of Western understanding of Asian design.

The China Trade in the First Half of the 19th Century

By the early 19th century, Europe and America had learned the secret of “hard paste” or true porcelain, so Westerners could produce their own high-quality wares. In the early American republic, porcelain factories popped up as early as the 1820s. This is not to suggest that that trade in Chinese porcelains declined; rather, it entered a new phase. 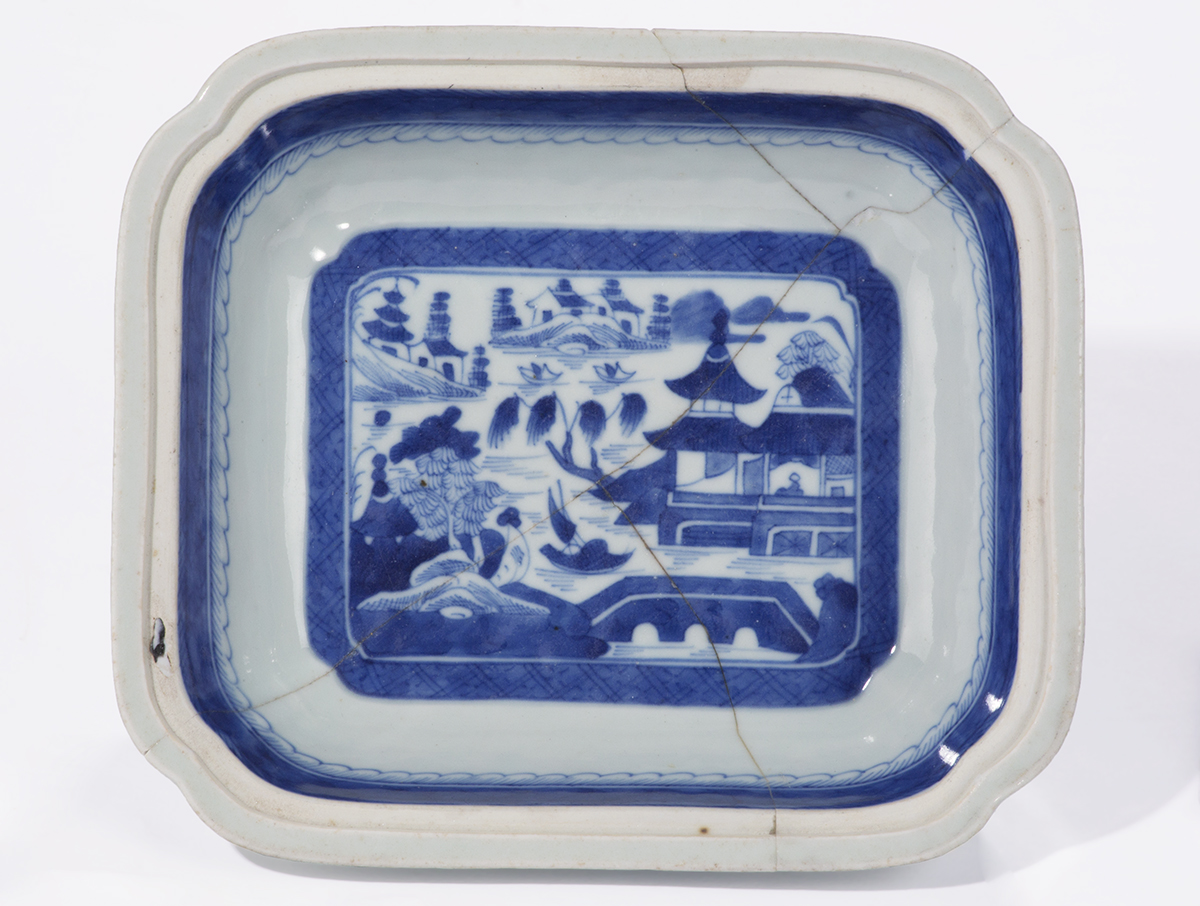 The serving bowl above would have been a prized possession of an American family in the first half of the 19th century. Part of a dinnerware set, this Canton ware, or “Blue Willow,” pattern appealed to middle-class Americans as an example of the exoticism of a faraway place, and implied the owners’ good taste and sophistication. Compared with the expensive and highly prized 18th-century wares, Canton china was inexpensive. This porcelain was shipped from Guangzhou, then called the Port of Canton by the English, to serve as a ship’s ballast under the more valuable tea chests. 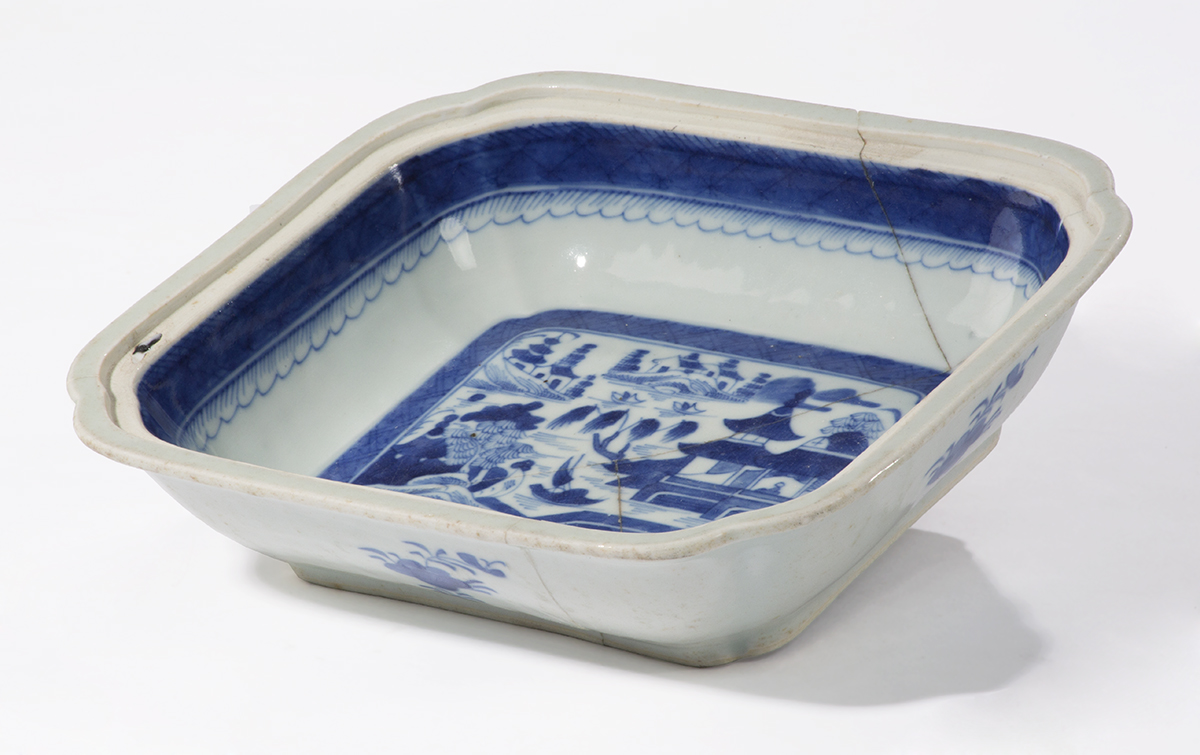 These wares usually depict a landscape with Chinese buildings and a bridge in the center and have a decorated rim. This pattern was widely copied by English makers in the late 19th and 20th centuries and became so inexpensive that it was sold at five-and-ten cent stores in the 20th century.  This example is interesting as it broke at some point during its working life and was mended with visible staples, indicating that it was indeed a valued possession. 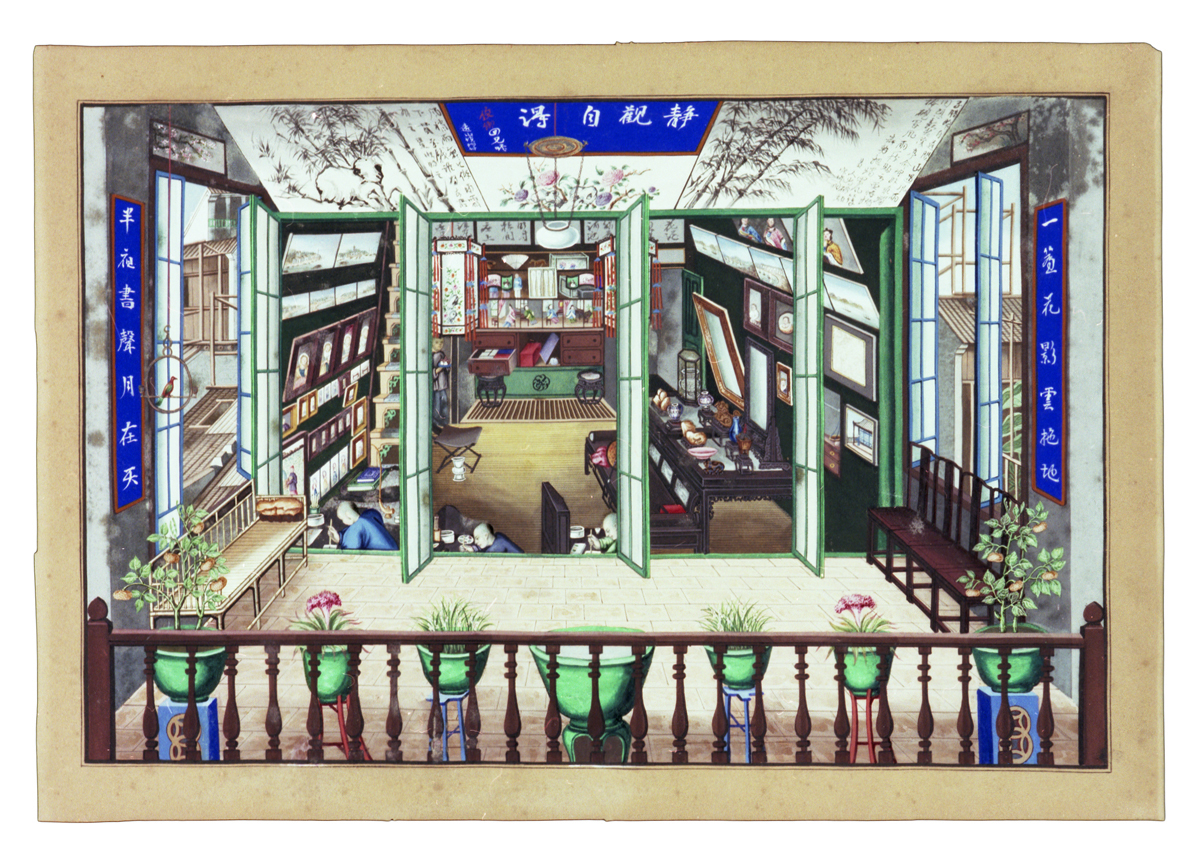 The remarkable image above shows the interior of a Chinese porcelain studio, with craftspeople decorating ceramics for the Western market. Visible on the wall on the left are prints or drawings supplied by Western agents, which were then copied by the artists in the foreground. The table on the right is filled with finished pieces of decorated ceramics. This piece itself was a souvenir intended for the Western market.

While the China trade continued throughout the 19th century, imports to America declined with the Civil War in the 1860s and never rebounded. After the Civil War, the United States and Europe became fascinated with another Asian nation, Japan.

Japan and the West

Japan, like China, traded with the Spanish, Portuguese, and Dutch beginning in the 15th century. However, by the middle of the 17th century, Japanese authorities closed their doors to Europeans, primarily due to the undue influence of Catholic and Protestant missionaries. In 1853, the American Commodore Matthew Perry, under the direction of President Millard Fillmore, arrived in Yokohama harbor with a fleet of steam ships, which impressed the Japanese with their high degree of technology. The Japanese grudgingly agreed to open their markets to the Americans and the West. During the next few decades, traditional Japanese arts flowed to the West, where they profoundly influenced European and American fine and decorative arts.

The wood block prints above are good examples of Japanese exports that excited Western artists and designers. The compositions were like nothing ever seen in Europe or America. The use of flat, unmodulated colors laid down next to each other, combined with diagonals, provided a sense of depth. This influenced the Impressionist and Post-Impressionist artists in France and designers everywhere. 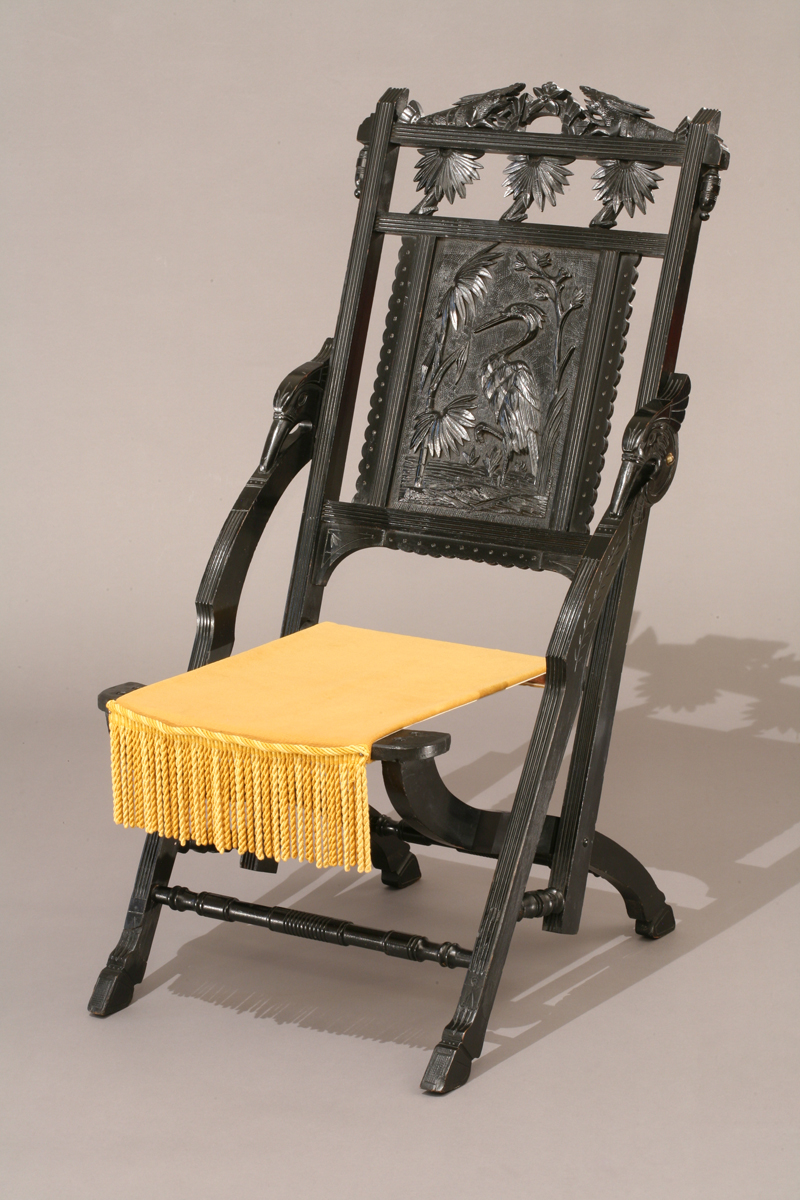 The influence of images from Japanese prints on Western decorative arts can be seen in the carved cranes on the side chair above, painted in black to imitate ebony, an expensive wood that late Victorians associated with Japan. This is known as Anglo-Japanese style, which began in England in the 1870s and spread to America by the 1880s. Like many of the Asian imports, this Western style had little to do with Japan itself; rather, it suggested the “exoticism” of the Far East. 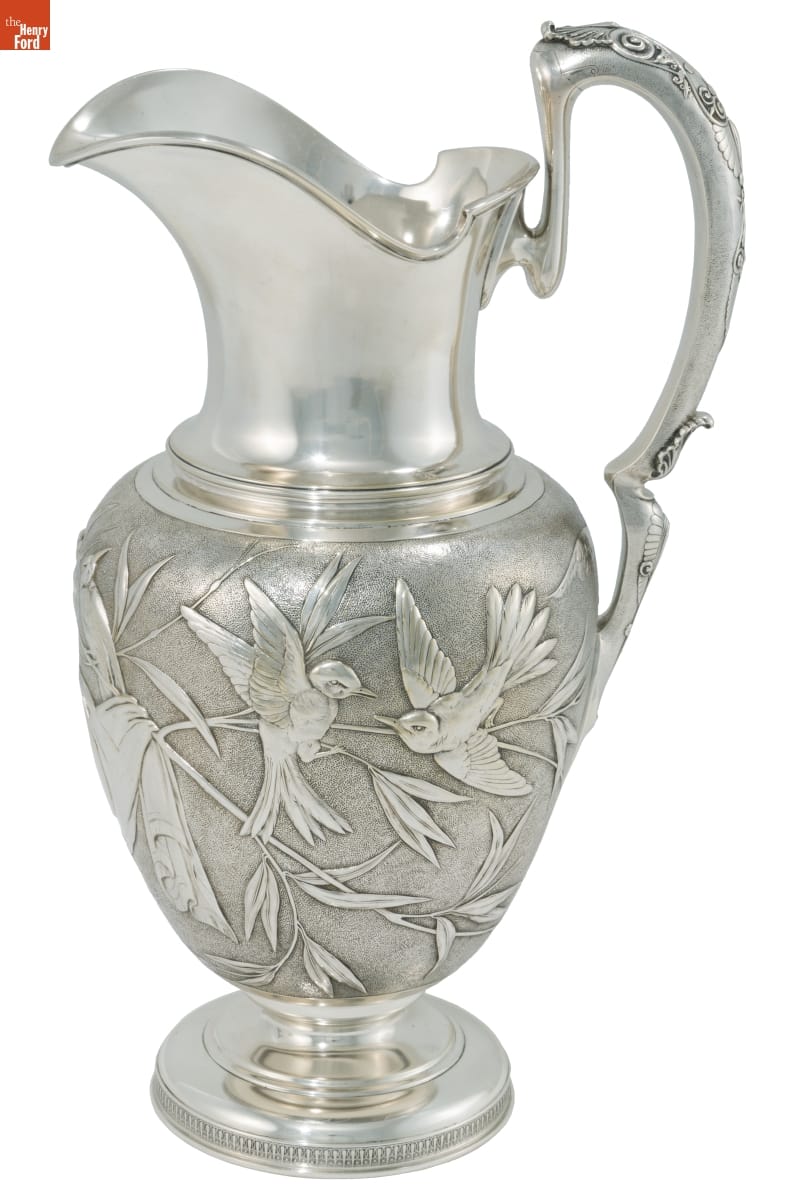 Like the side chair, Tiffany and Company’s elegant silver pitcher uses stylized images of birds and foliage done in the Anglo-Japanese style. 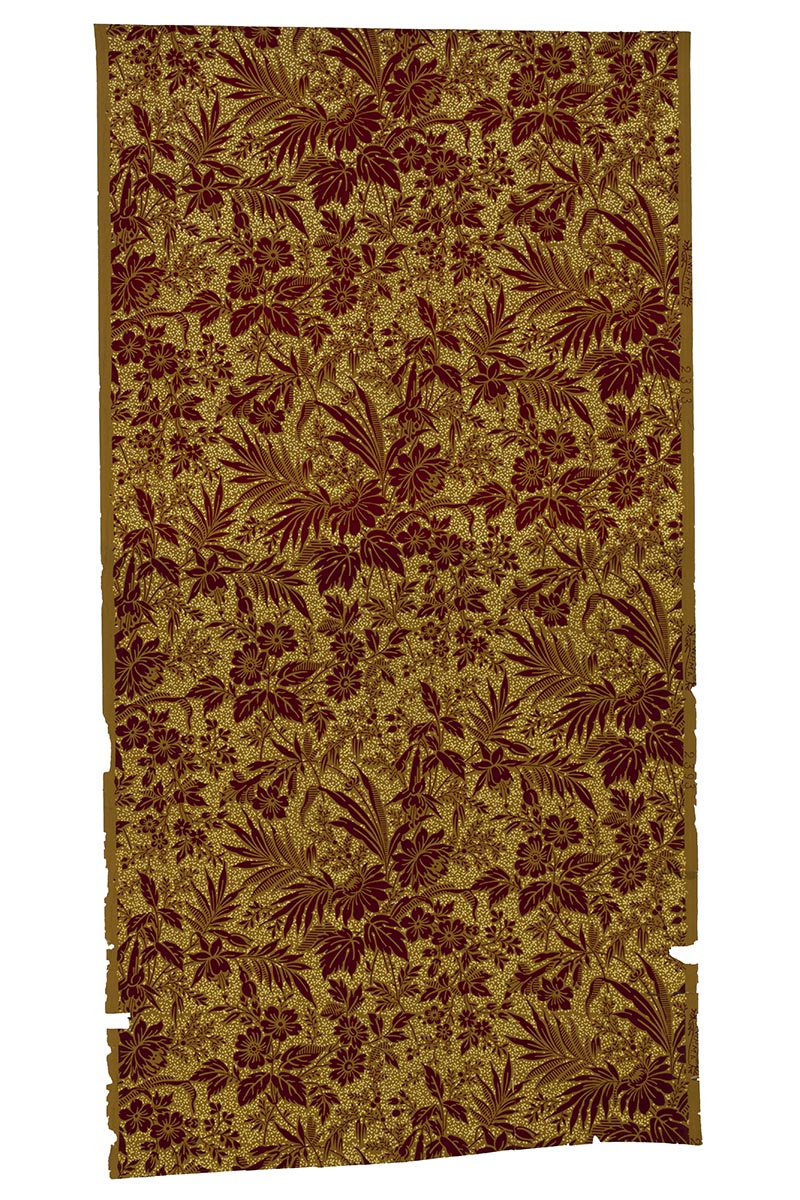 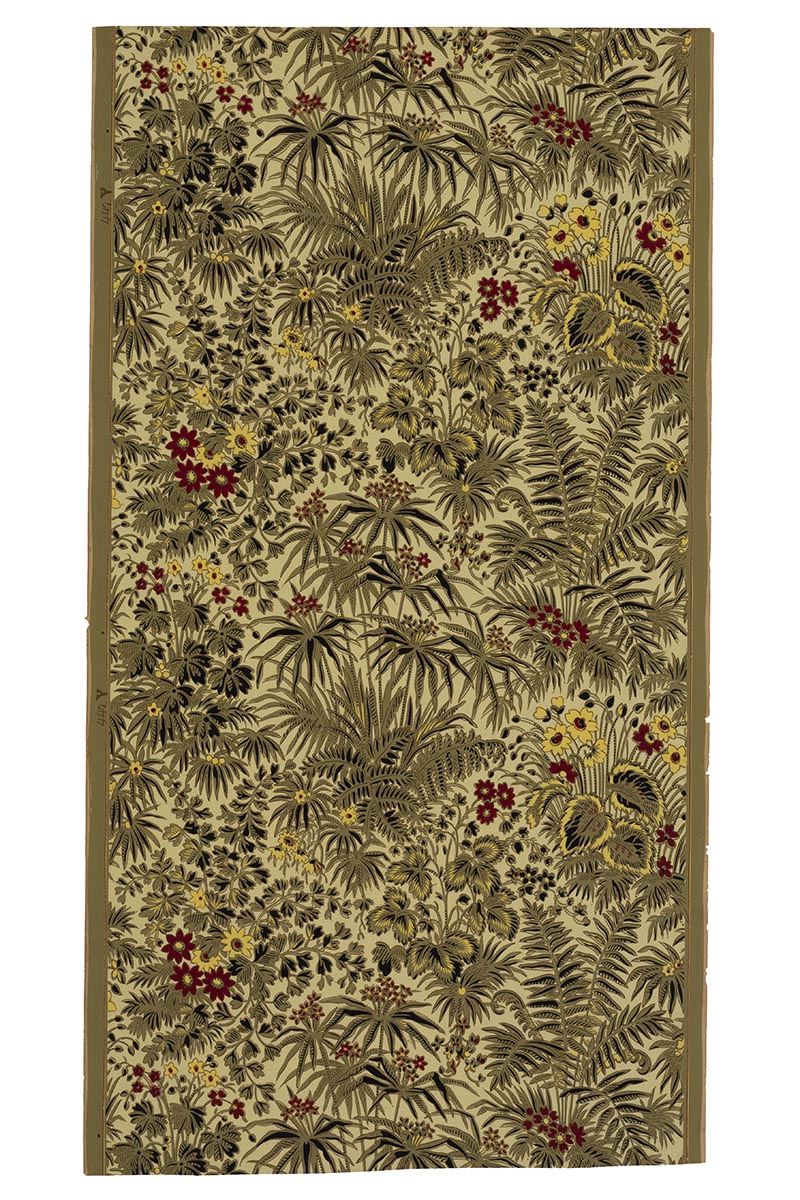 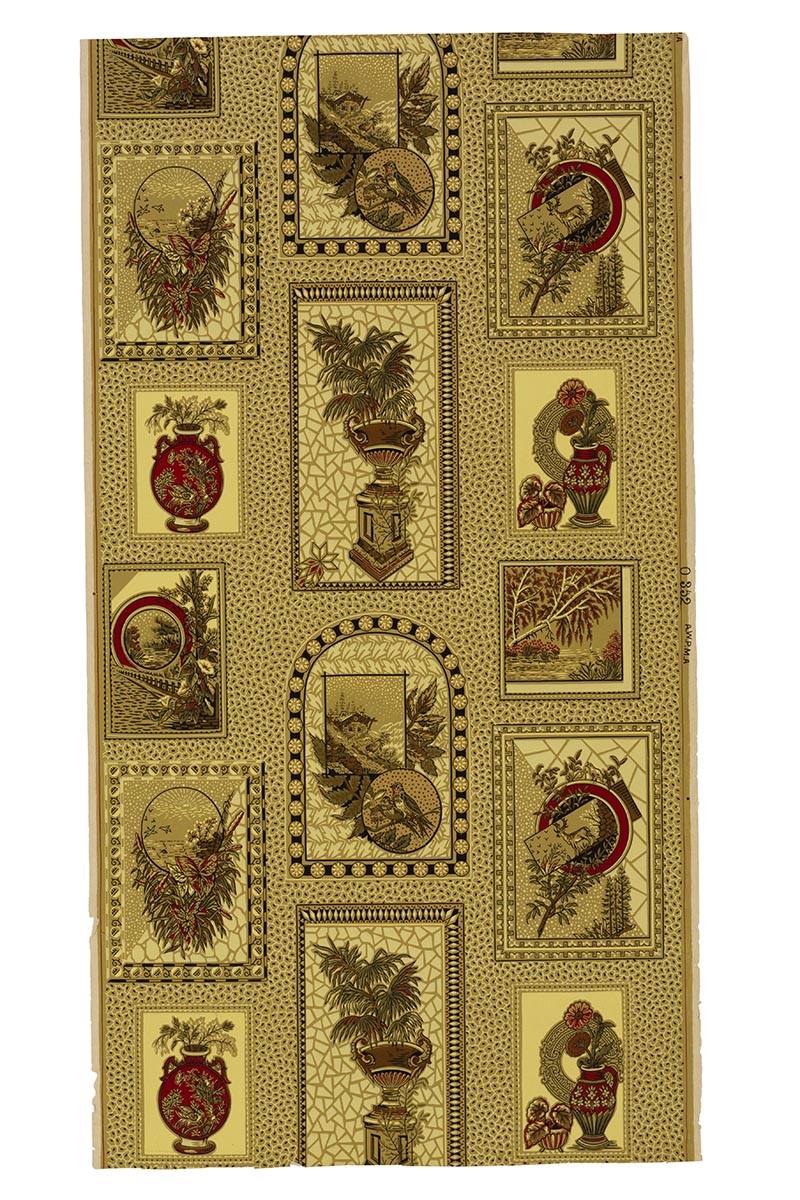 The highly stylized wallpapers shown above were derived from the floral patterns of Japanese prints. European and American designers called these abstracted patterns “conventionalized” ornament. These wallpapers appealed to those interested in what was called the “aesthetic” taste. This taste tended to be high style, although by the 1880s, middle-class Americans applied elements of it in their interiors. For example, the sample above was found in the middle-class Firestone Farmhouse, now in Greenfield Village. The date of our interpretation is 1885.

What we’ve looked at so far has imagery directly linked to either Chinese or Japanese originals, but there is another category of decorative objects that contain more interpretive elements derived from Chinese, Japanese, or other Asian designs. Some of these pieces contain imaginary elements that the designer created out of thin air. 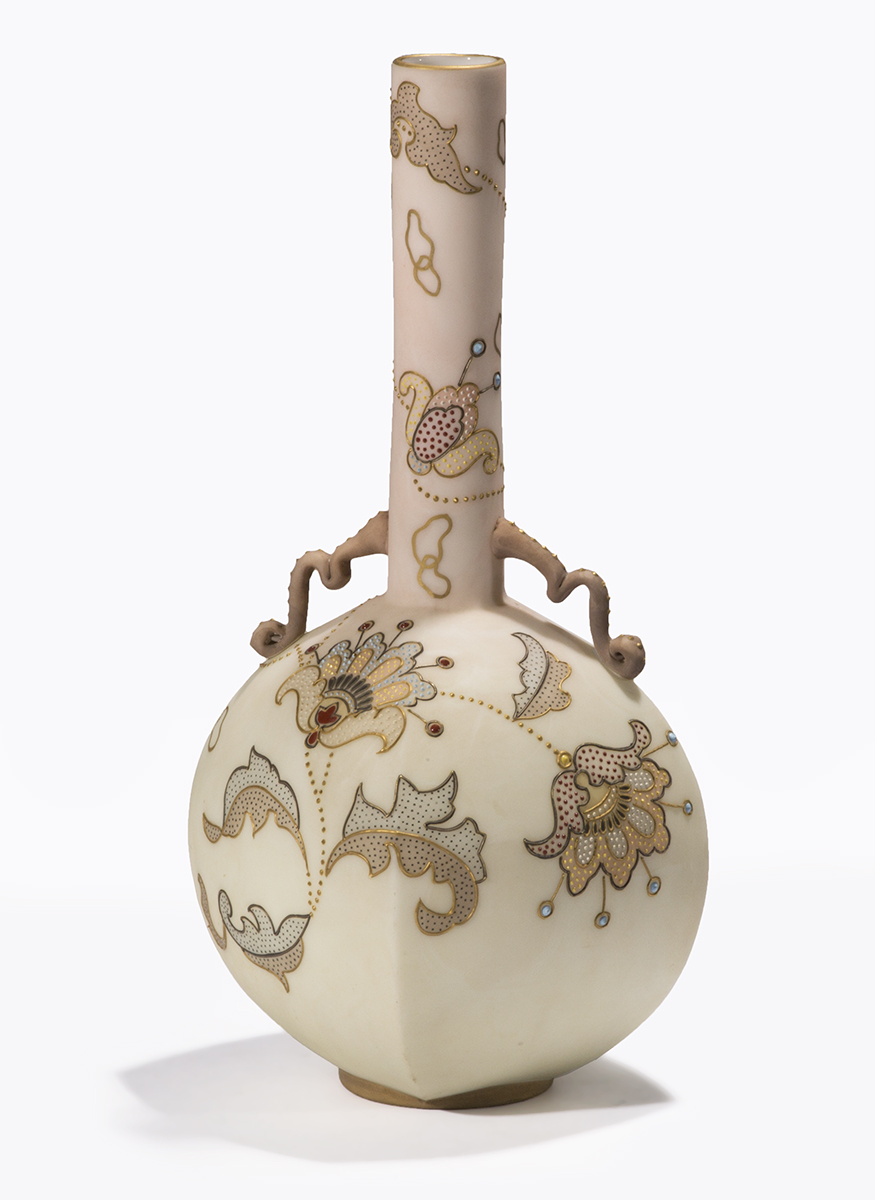 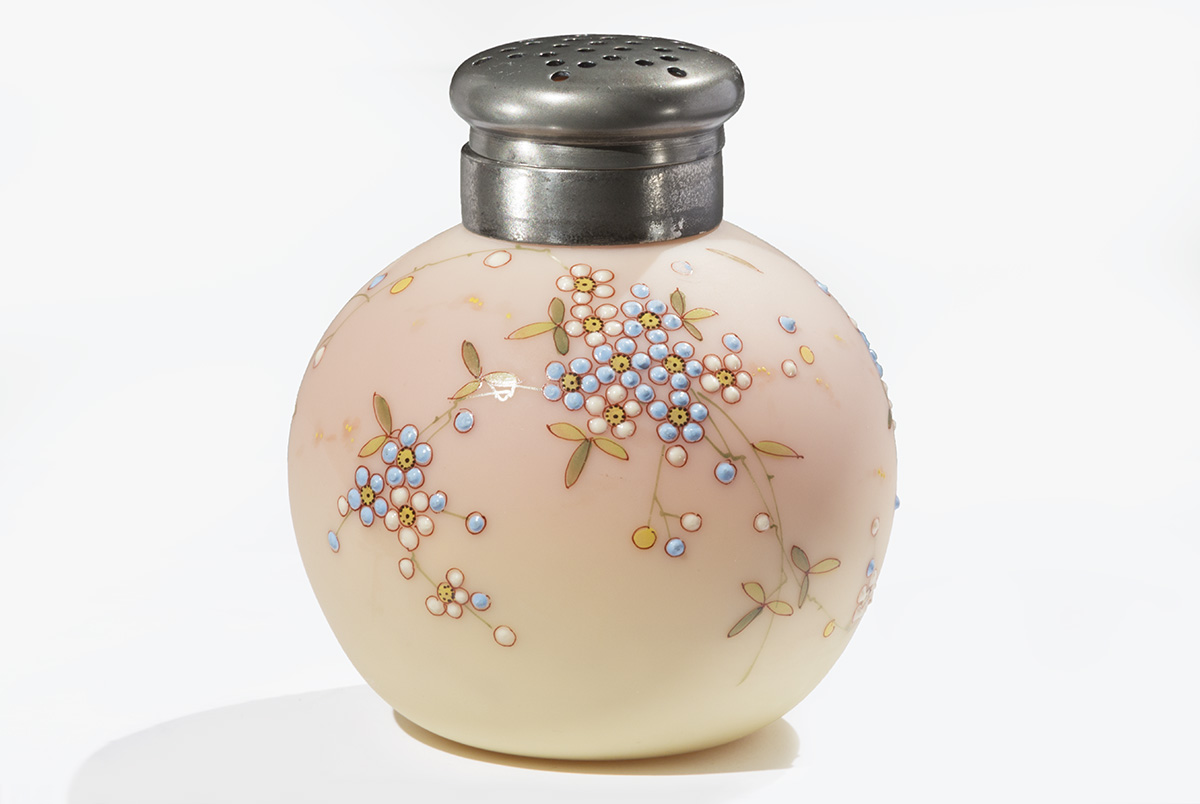 The ornate and elegant glass pieces above are clearly influenced by Japanese designs but have been transformed by late-19th-century American glassmakers into something unique. They are highly decorative and distinctly of their time. 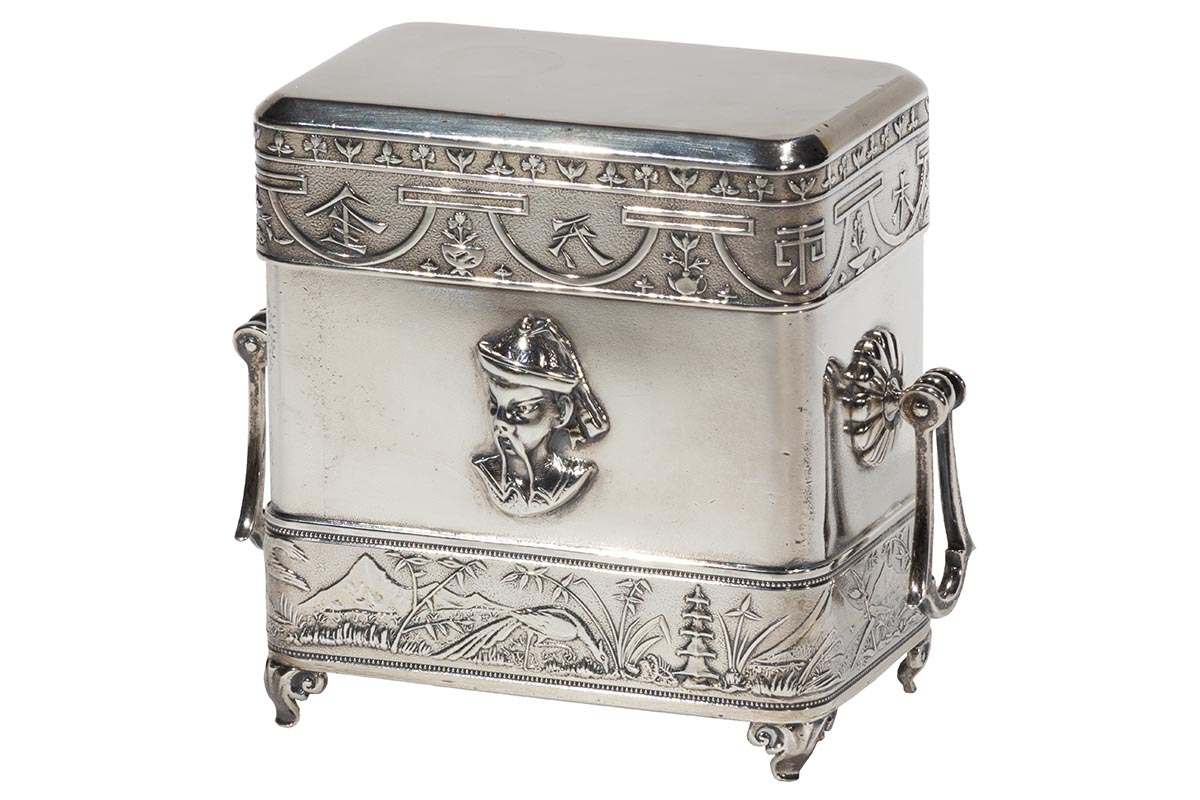 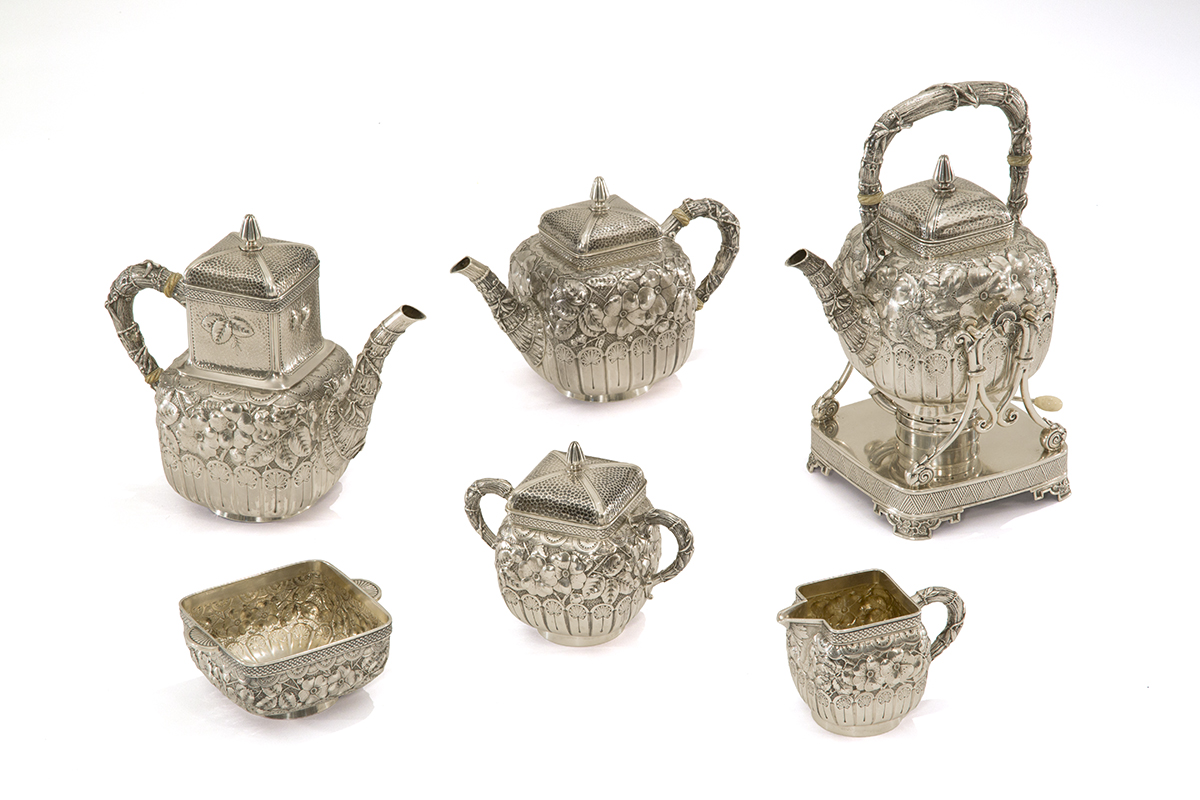 In the late 19th century, wealthy Americans demanded ornate silver sets, and above are notable examples of just how wild they could get. The tea caddy references Asian design elements—as perceived by Americans, who had little true understanding of Asian cultures. Likewise, the full tea set picks up on the Anglo-Japanese style, but takes it much farther, into something truly Victorian—and, like the glass examples, totally unique. 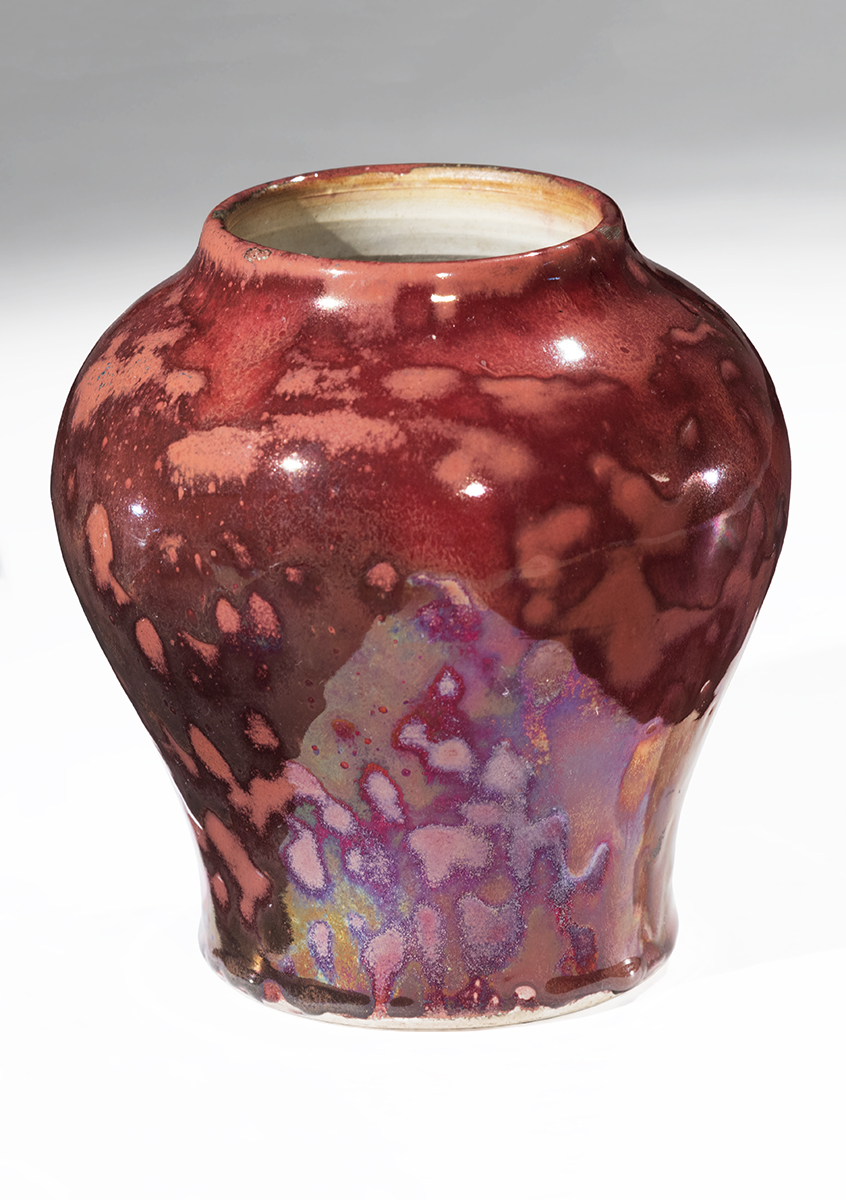 By the beginning of the 20th century, there were several designers looking for true sources of inspiration in Asian design. One of the most interesting of these was the English-born potter Hugh Robertson (1845–1908). During his time at the Dedham Pottery in Massachusetts, Robertson was obsessed with recreating the well-known Chinese oxblood glaze, seen on the vase above. He spent decades experimenting and perfecting the glaze, first at his family's Chelsea Keramic Art Works and later at Dedham. He was also interested in recreating the forms of Chinese porcelain made for domestic production rather than for export.

I hope you have enjoyed this quick journey through The Henry Ford's collection of Asian-influenced decorative arts. All of these artifacts, as well as many more, are available for browsing online in our Digital Collections.