The China Trade in the 17th and 18th Centuries

Western Europe and its colonies in the Americas have long been fascinated with the Eastern cultures Europeans depicted as “mysterious,” and specifically their exotic trade goods, such as spices, silk, porcelain, and, later, tea. In fact, this interest was the motivation behind the European arrival in the Americas, as Europeans sought a shorter route to reach China and India in the 15th and 16th centuries. This is the first of two blog posts that examine the European and American fascination with Asia and how that was expressed in the decorative arts.

The earliest form of decorative arts that fascinated Europeans was porcelain. Around the 7th or 8th century C.E., the Chinese first produced what Westerners call “hard paste” porcelain—clay that consists of a compound containing the mineral kaolin and is fired at an extremely high temperature, usually around 1400 degrees Celsius. The kaolin in the clay fused the body with the glaze on top during the firing process. The resulting vessel proved to be extremely durable, almost glass-like, and resisted chips and cracking. Should the piece break, it would be a clean break.

Western ceramics were mostly made from earthenware, usually fired at a relatively low temperature with a slip (watered-down clay) glaze or a true glaze. Both processes cover the vessel with fine particles which fuse into a glasslike layer, sealing the pores of the clay body. There are two main types of glazed earthenware. The first is covered with a transparent lead glaze, where the earthenware body to which this glaze is applied has a creamy color, known as creamware. The second type, covered with an opaque white glaze, is called tin-glazed earthenware, popularly known as majolica, faience, or delft. Both types of earthenware chipped and broke easily.

When Europeans were first exposed to Chinese porcelain in the 14th and 15th centuries, it was seen as wondrous and innovative. In addition to its glasslike qualities, the pure white color of the porcelain amazed Europeans. In the 16th and 17th centuries, Spanish, Portuguese, and Dutch traders competed to secure Chinese porcelains for the European markets. The teacup shown below is a good example of what the Europeans craved. 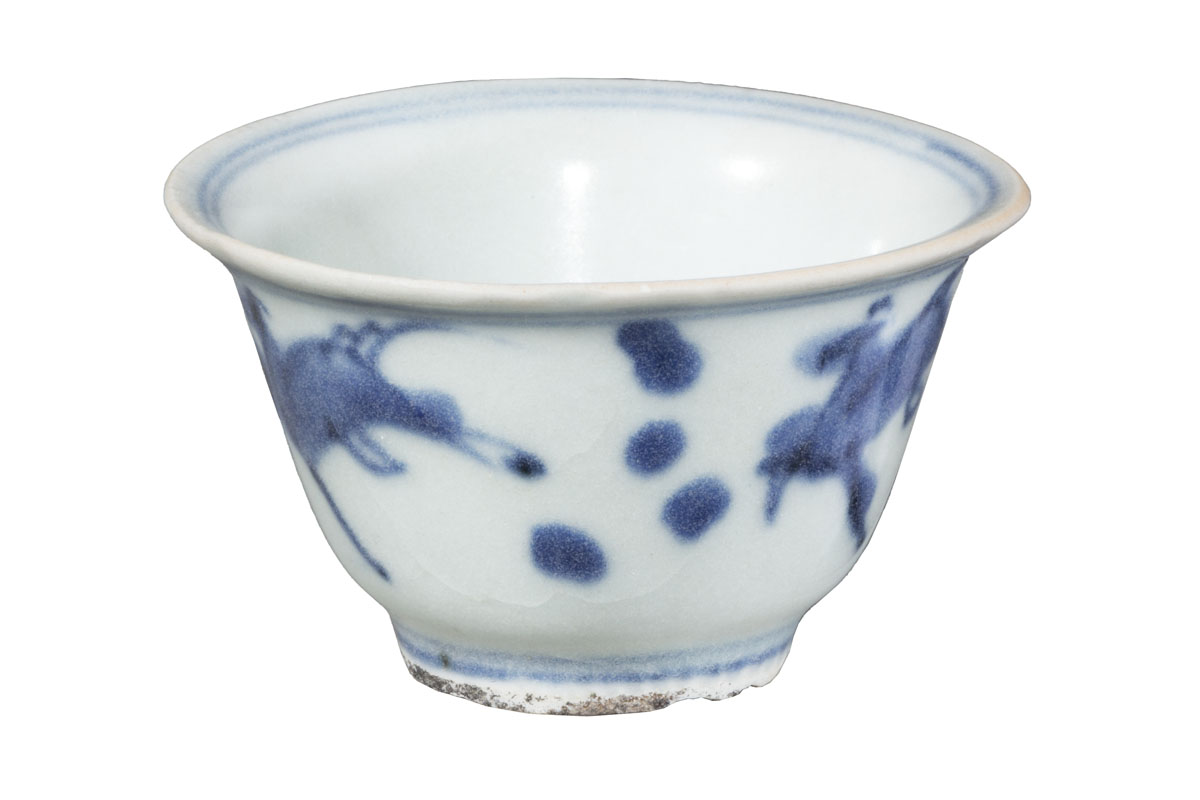 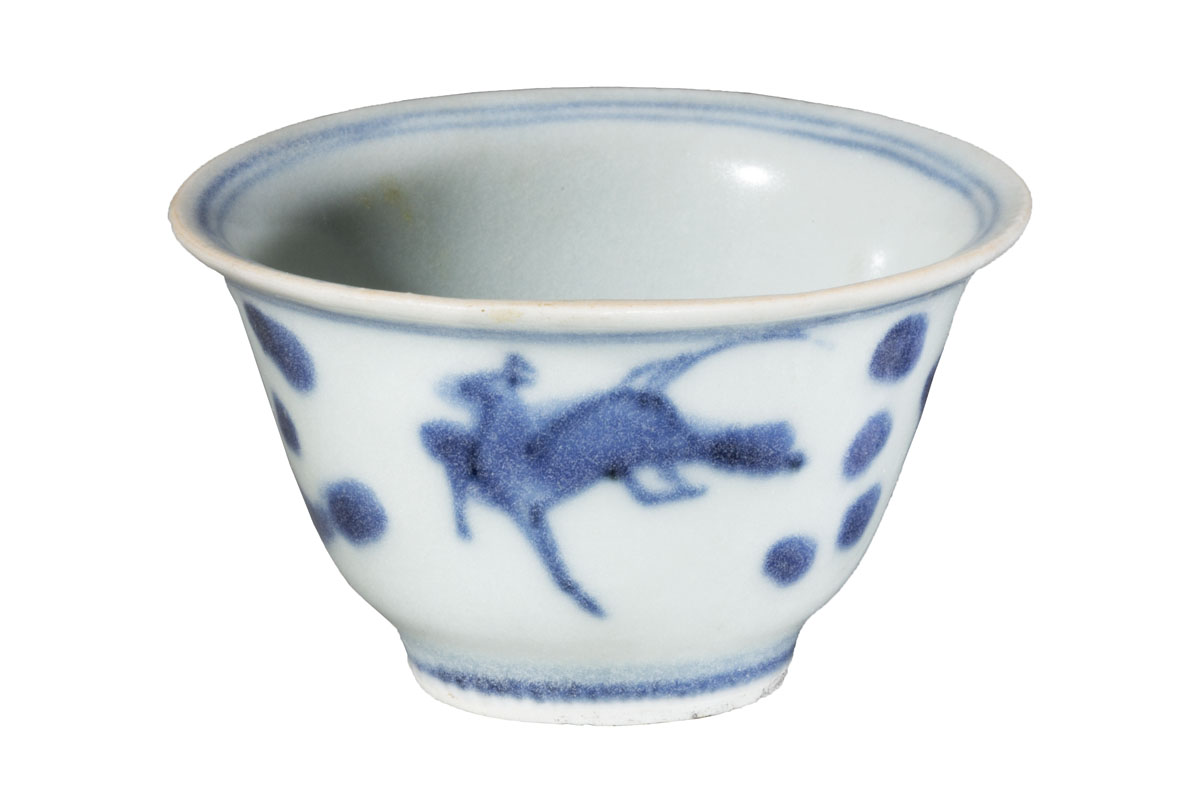 This teacup was salvaged from a shipwreck dating around 1690 in the South China Sea, about 100 miles from Vung Tau, Vietnam. During the early 1990s, thousands of porcelain items destined for the Dutch market were brought up from the wreck and sold at auction. The Henry Ford acquired this item from one of the auctions. This small cup would have been prized in the household of a wealthy European. It might even have found its way to the American colonies as a luxury item during the late 17th or early 18th centuries.

Items like this teacup provided a design source for European ceramic makers beginning in the late 17th century. Basically, they attempted to appropriate the Chinese designs in earthenware, as in the storage jar shown below. 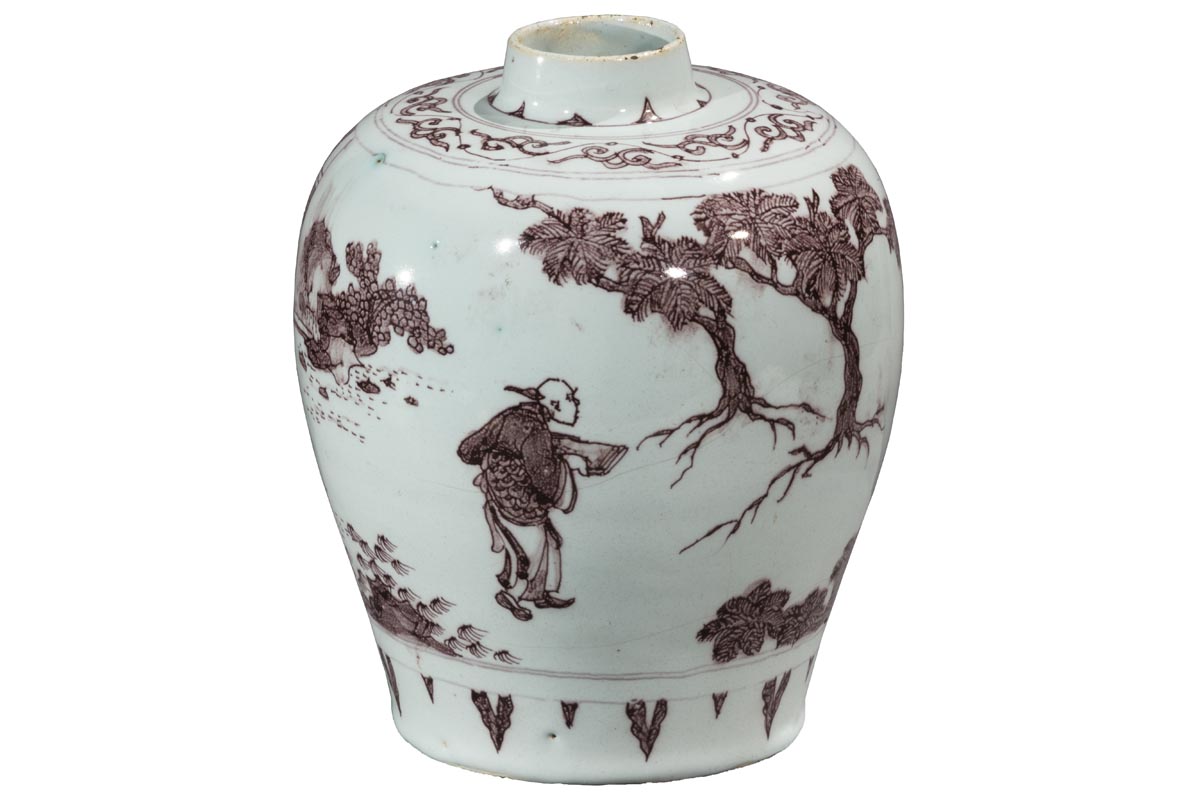 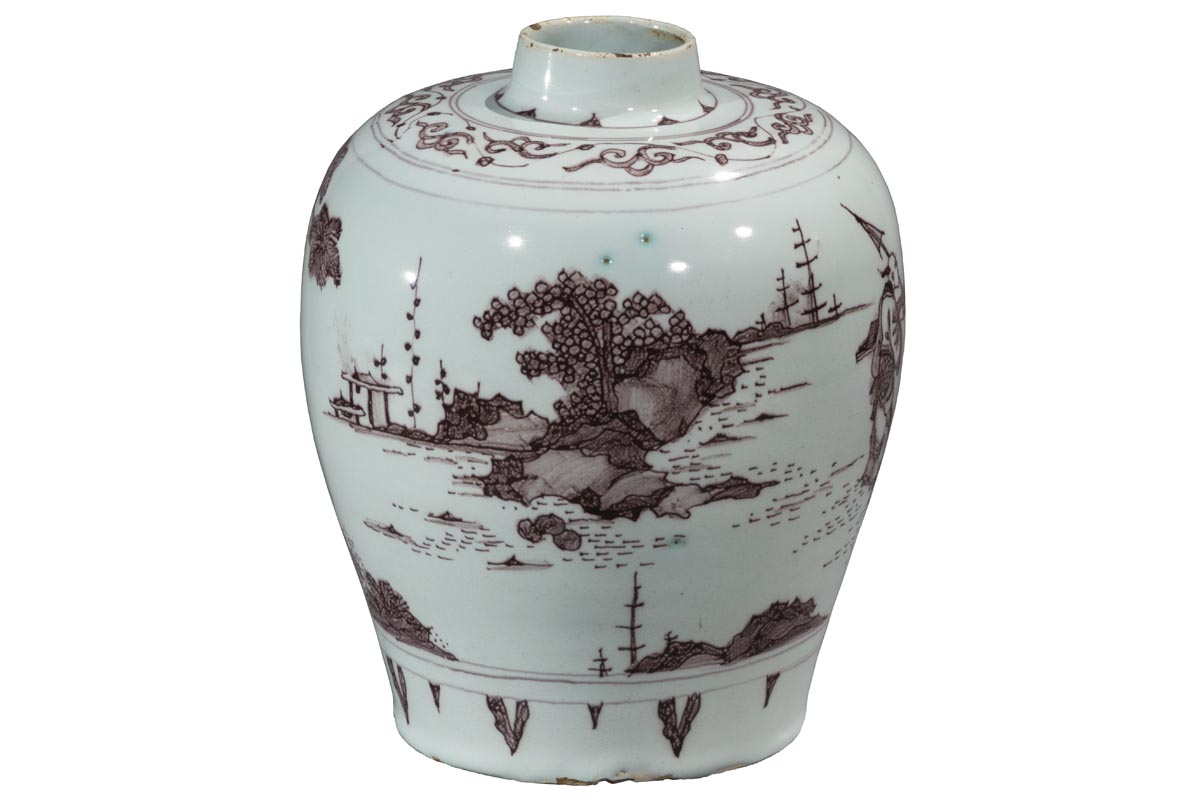 What is so interesting about this piece is that the Dutch decorator is drawing Chinese figures in a Chinese inspired landscape for a European audience. Even the form, known as a ginger jar shape, is based on Chinese precedent. The only missing element here is the circular lid. This is helpful for us because the top rim, where the lid should be, shows us the chips in the glaze that occurred though use. We can see that this is not Chinese porcelain, as the dark-colored earthenware body shows through. Chips are also visible along the base. Clearly this jar was not only a prized object but was used. 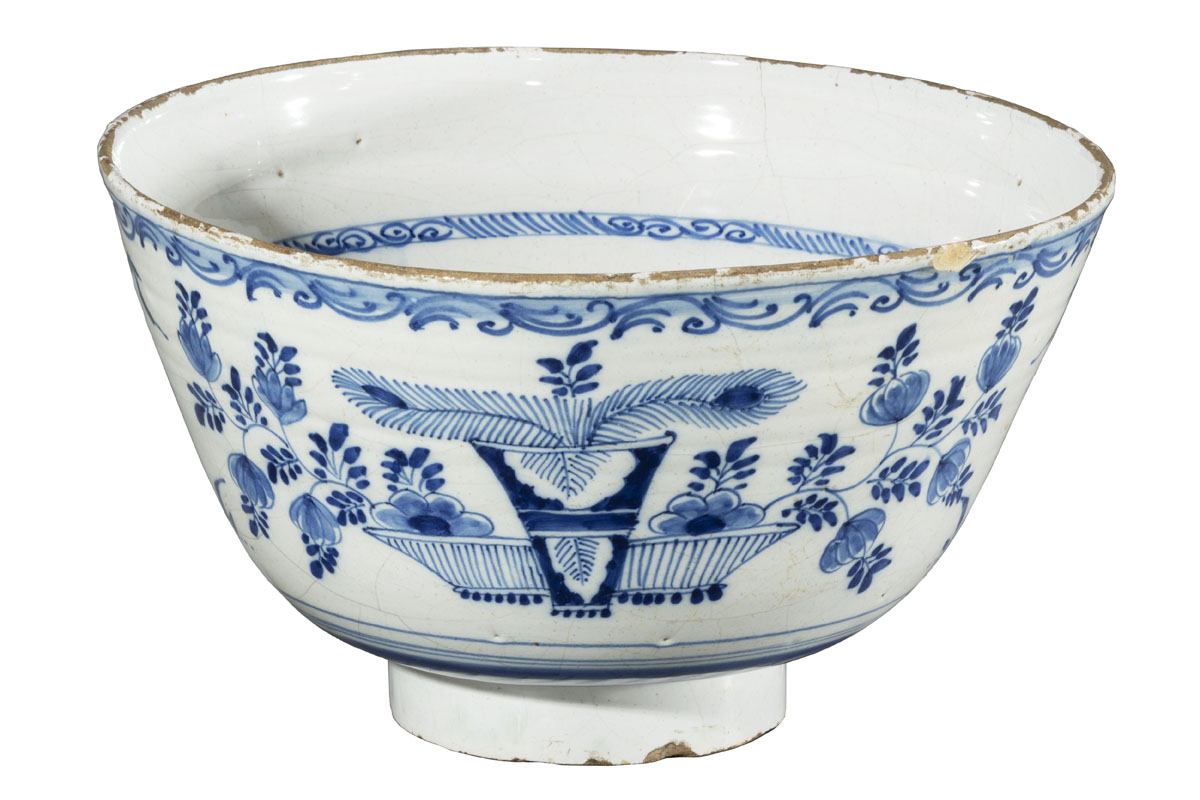 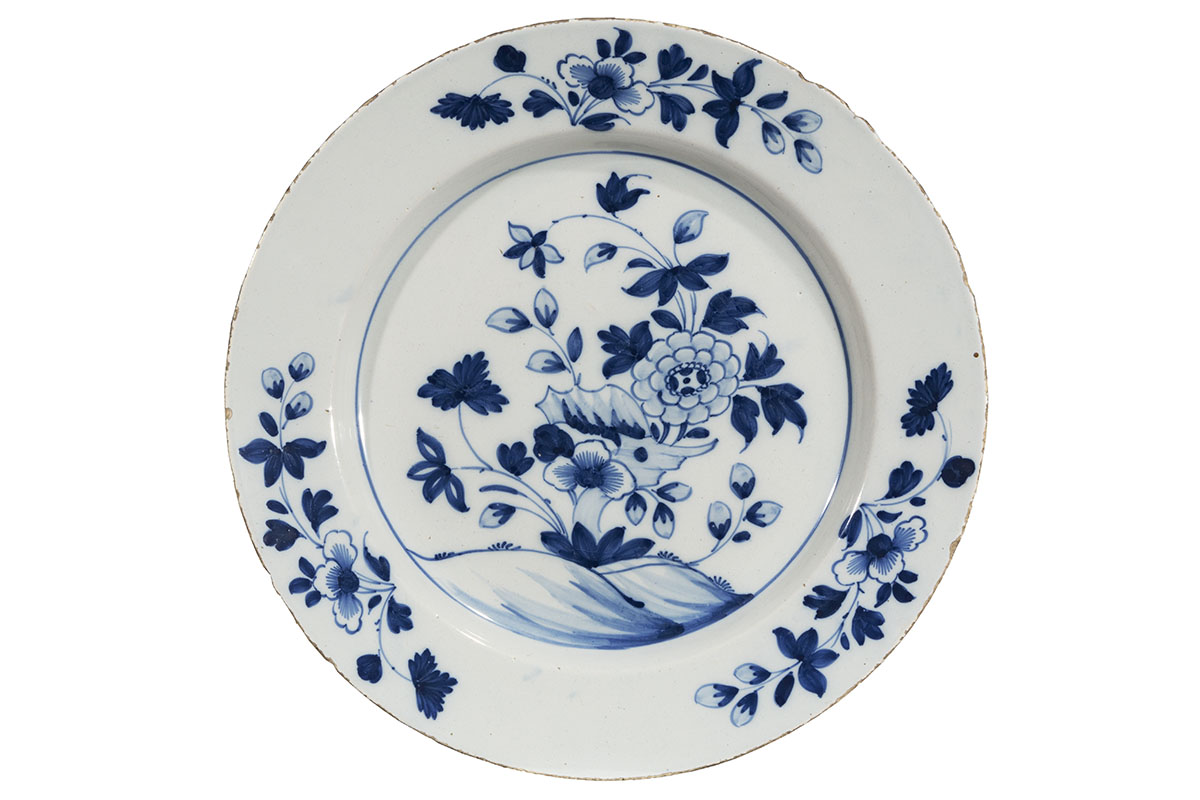 The punch bowl and plate shown above, both made in England, attempt to copy the look of Chinese porcelains—but, like the storage jar, are made of earthenware. We could really call these the first "knock-offs" in history. They represent the beginnings of what collectors and scholars call “Chinoiserie”—the appropriation and interpretation of Chinese and East Asian design motifs by Europeans. The idea was to create the spirit of a faraway place and give the owner the cachet of owning a luxurious and expensive object. The underlying idea was to project a sense of worldliness and sophistication. 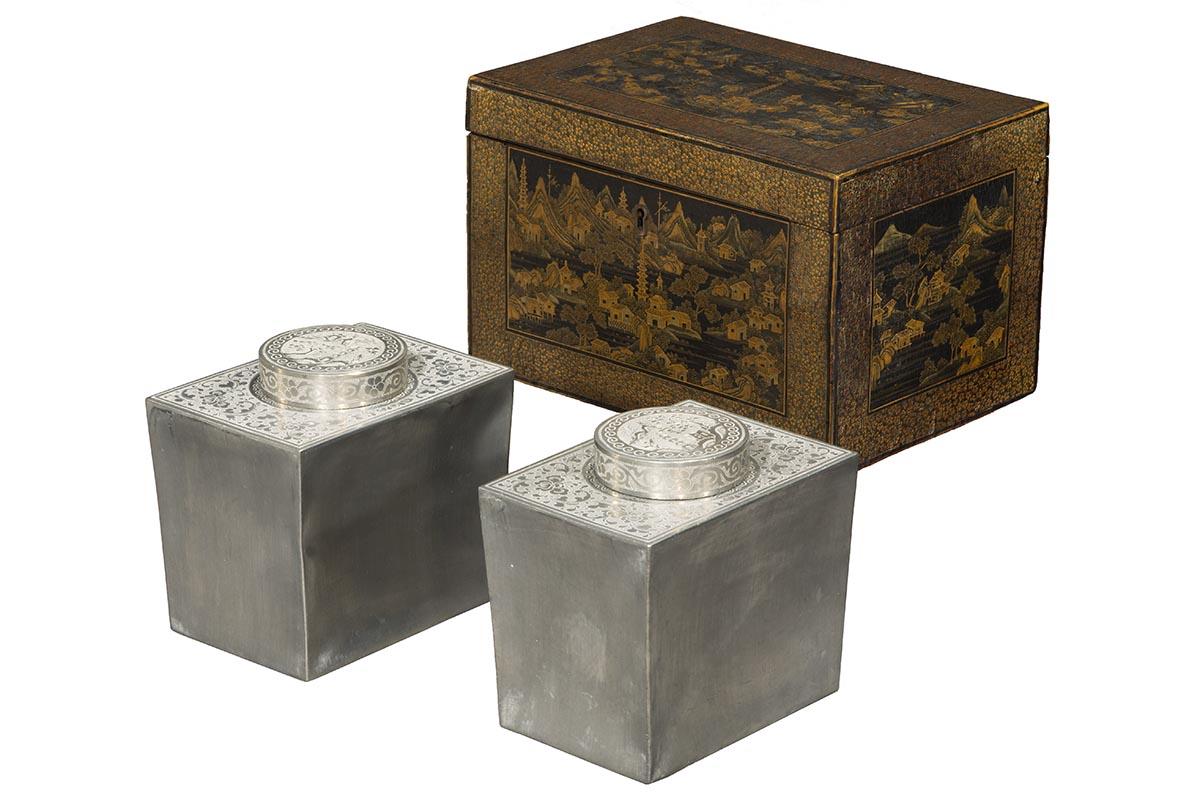 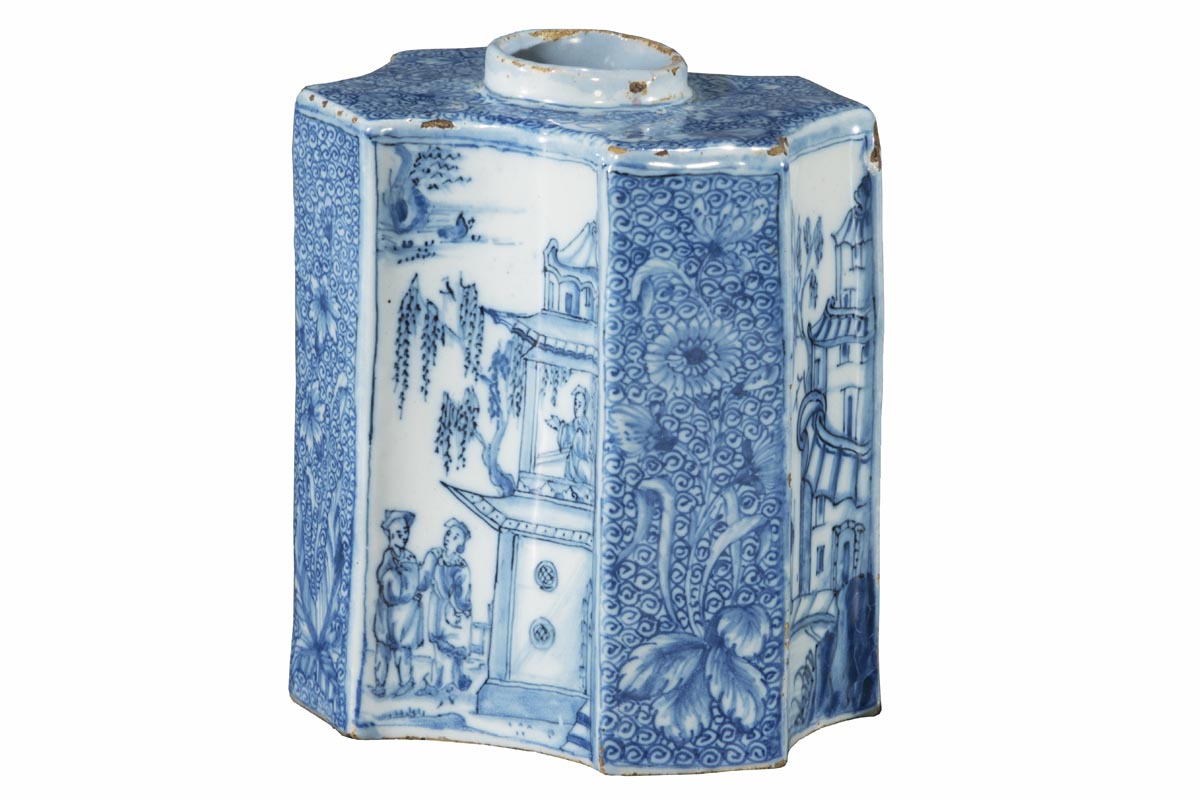 During the 17th and 18th centuries, tea from China became an important trade good, especially in England and America. Elegant Chinese lacquer boxes, complete with Chinoiserie scenes, became the rage, as did tea caddies, a necessary part of a tea set designed to safely store and dispense tea leaves. 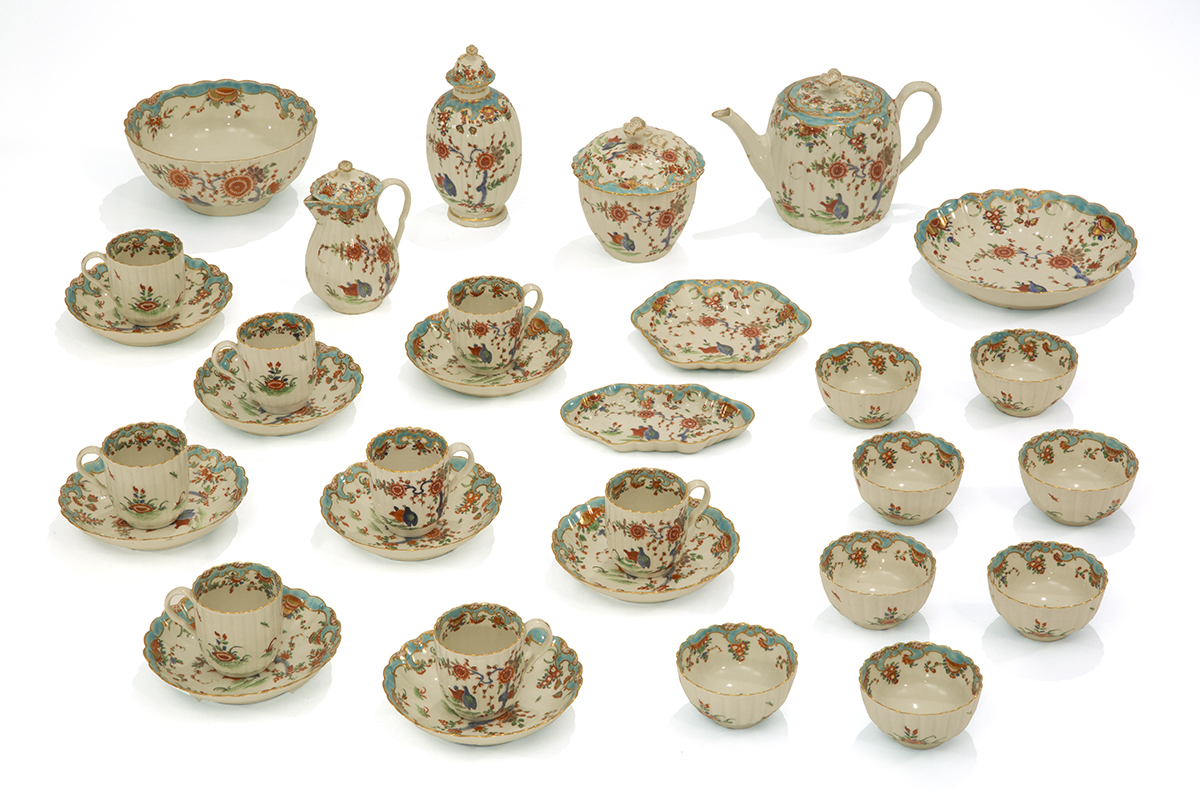 In the later 18th century, tea equipment became extremely sophisticated, as the set above shows. This service uses Chinese or Chinoiserie decorative elements and combines them with the popular French Rococo decorative style to a luxurious effect. The English Worcester Porcelain Company tried to imitate Chinese porcelains with their “soft paste” porcelains, which were close approximations of the true “hard paste” Chinese wares. By 1800, the chemistry of Chinese porcelains was known in Europe—first by the Meissen firm in Germany, then later spreading out across the continent. 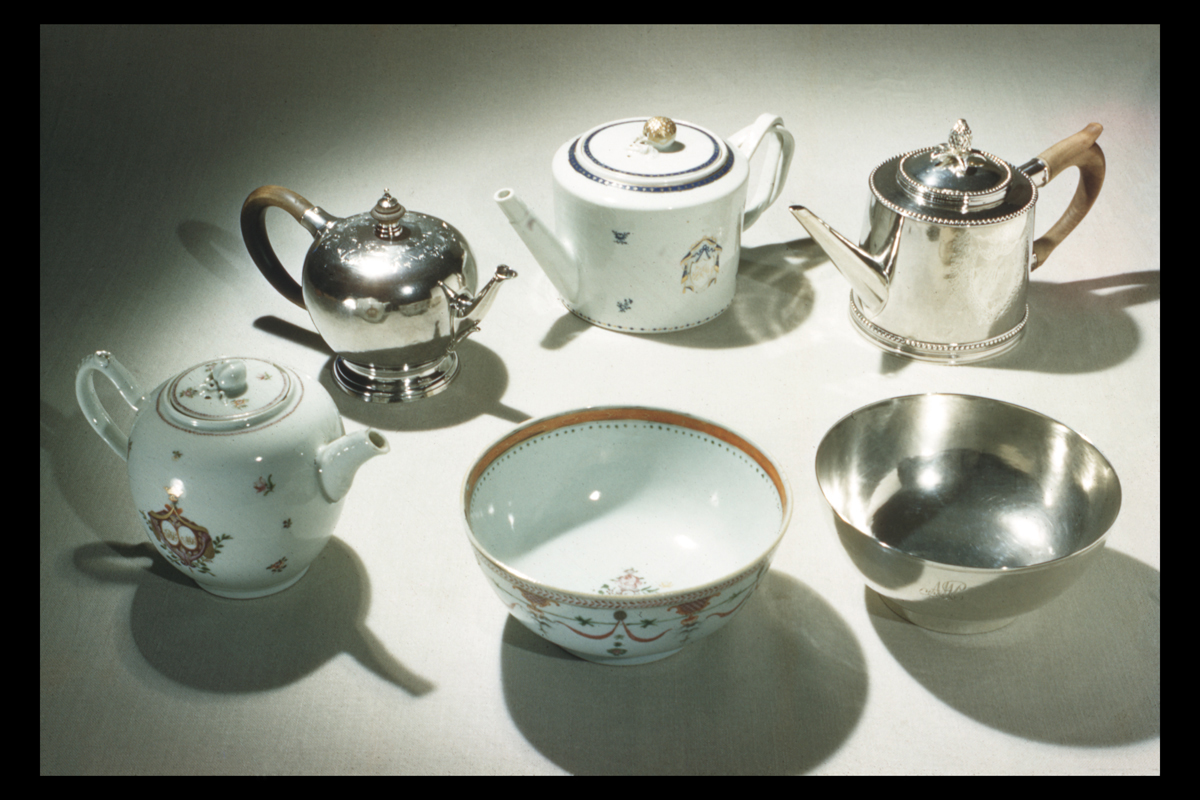 An interesting aspect of the China Trade was the production of Chinese versions of Western forms in porcelain. Western traders or agents, known as “supercargoes,” brought examples of Western wares for copy to Guangzhou (then called the port of Canton by the English). There, they presented them to their Chinese counterparts, who took these items to the porcelain factories located in Jingdezhen, then the porcelain capital of China. 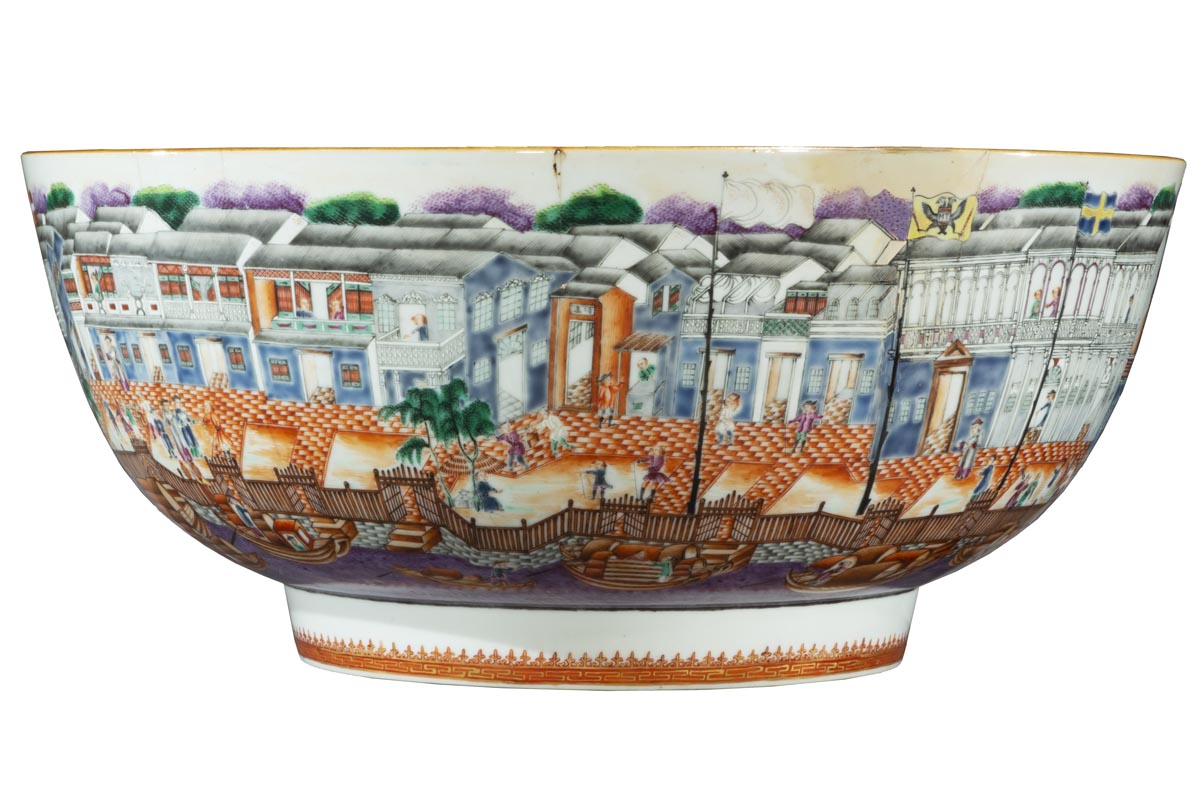 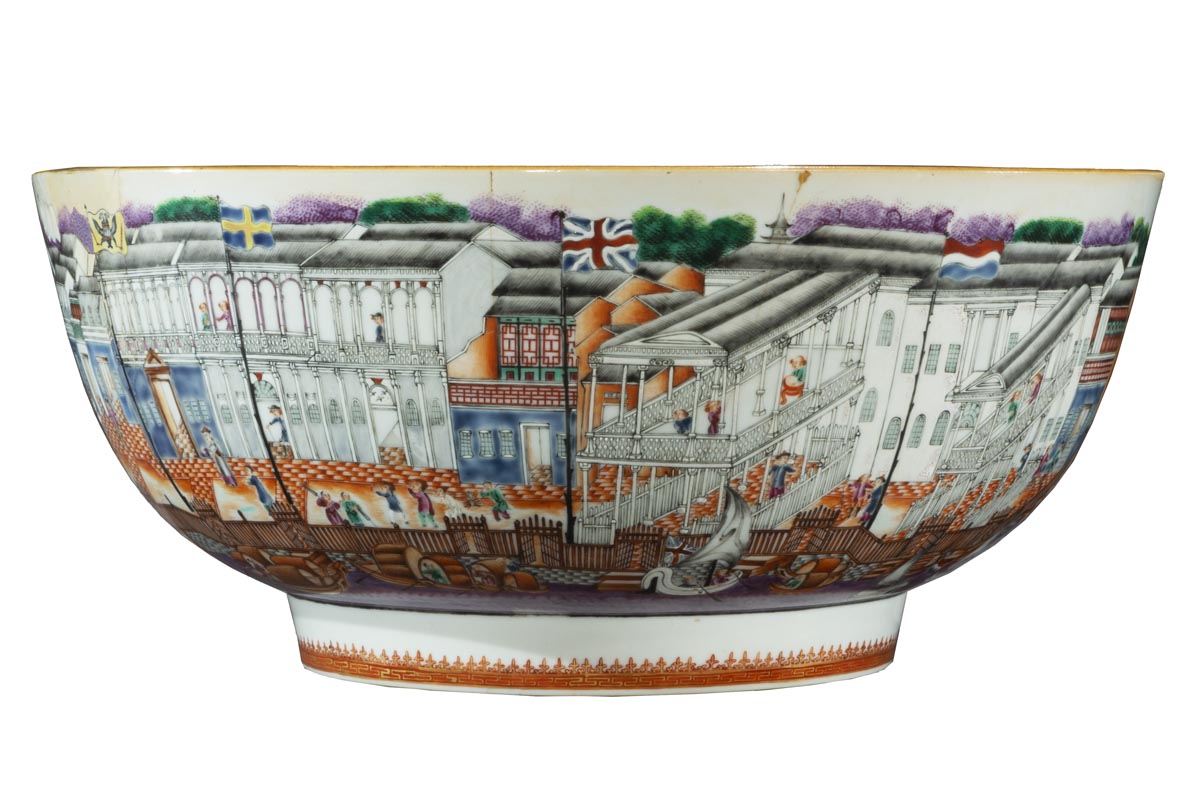 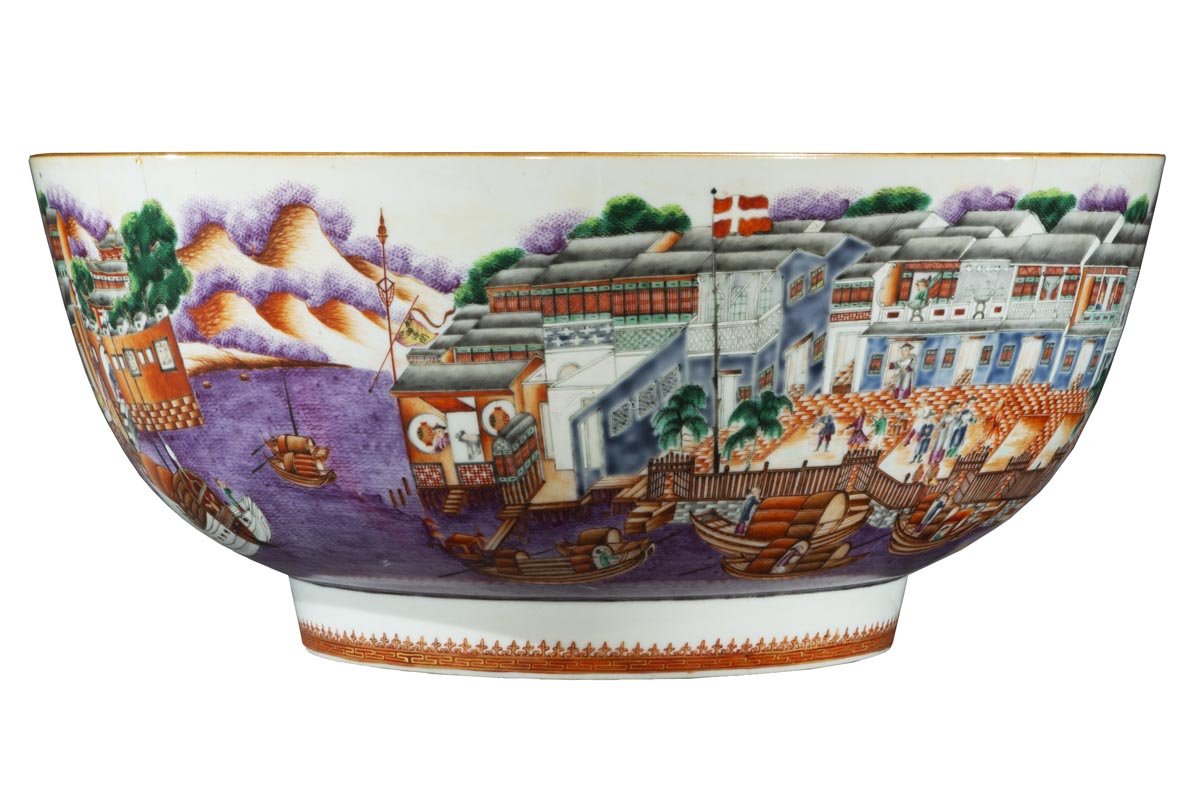 “Hong” Bowl, about 1780, Showing the Port of Guangzhou and the Trading Office of Denmark, Indicated by the Flag / THF190088

One of the most interesting aspects of the China Trade was souvenir “Hong” bowls that showed panoramic views of offices, warehouses, and living spaces for foreign merchants in Guangzhou in the late 18th century. These were brought back to the West by supercargoes and used for serving punch at parties. Western merchants were allowed access only to the port area and needed Chinese intermediaries to send their orders to the porcelain factories inland.

In addition to porcelain tea and lacquerware, Westerners sought out luxurious Chinese silks, but relatively little else was imported to the West. One exception is the teapot shown below, made of a Chinese alloy of nickel and copper known as Paktong that resembles silver. In fact, the term “Paktong” is a corruption of the Chinese “bai tong,” meaning “white copper.” 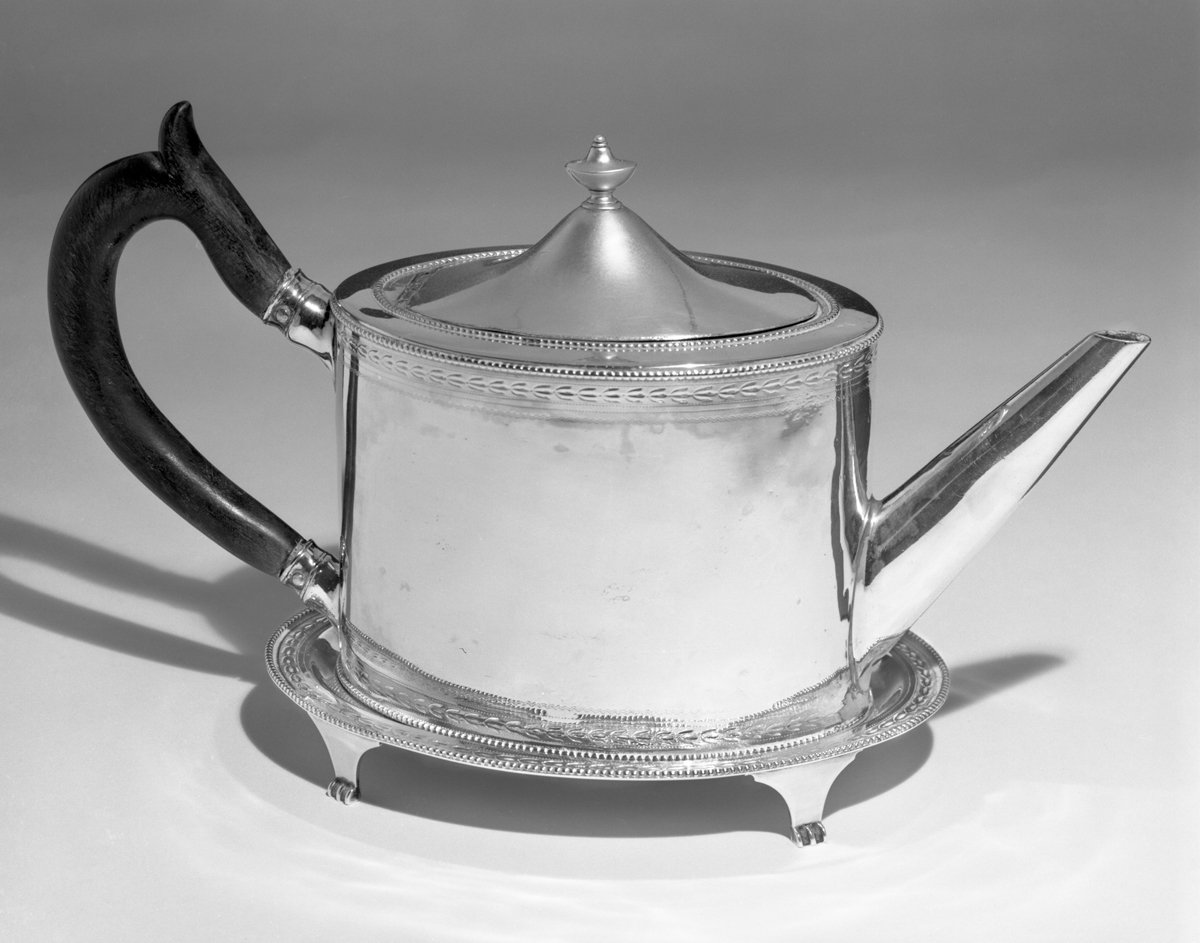 This teapot, made around 1800, was created for sale in the newly independent United States. Following the Revolutionary War, Americans were eager to establish international trade, and the lucrative China Trade was at the top of their list. This teapot would have appealed to Americans as it was executed in the fashionable Federal or Neoclassical style, which emphasized geometric forms, ovals, and cylindrical shapes.

By 1800, the China Trade began to transform. The American market broadened the China Trade, especially as the 19th century progressed and the United States grew. Also, Chinese goods were no longer viewed as unique and luxurious, as they were in the 18th century. This is partly due to the Western discovery of true or “hard paste” porcelain. The Chinese monopoly was gone. Still, Asian goods were depicted as exotic and the romanticized mystery of the Far East continued. In a second installment of this story, we will examine the transformation and role of Japanese influence on the West in the later 19th century.