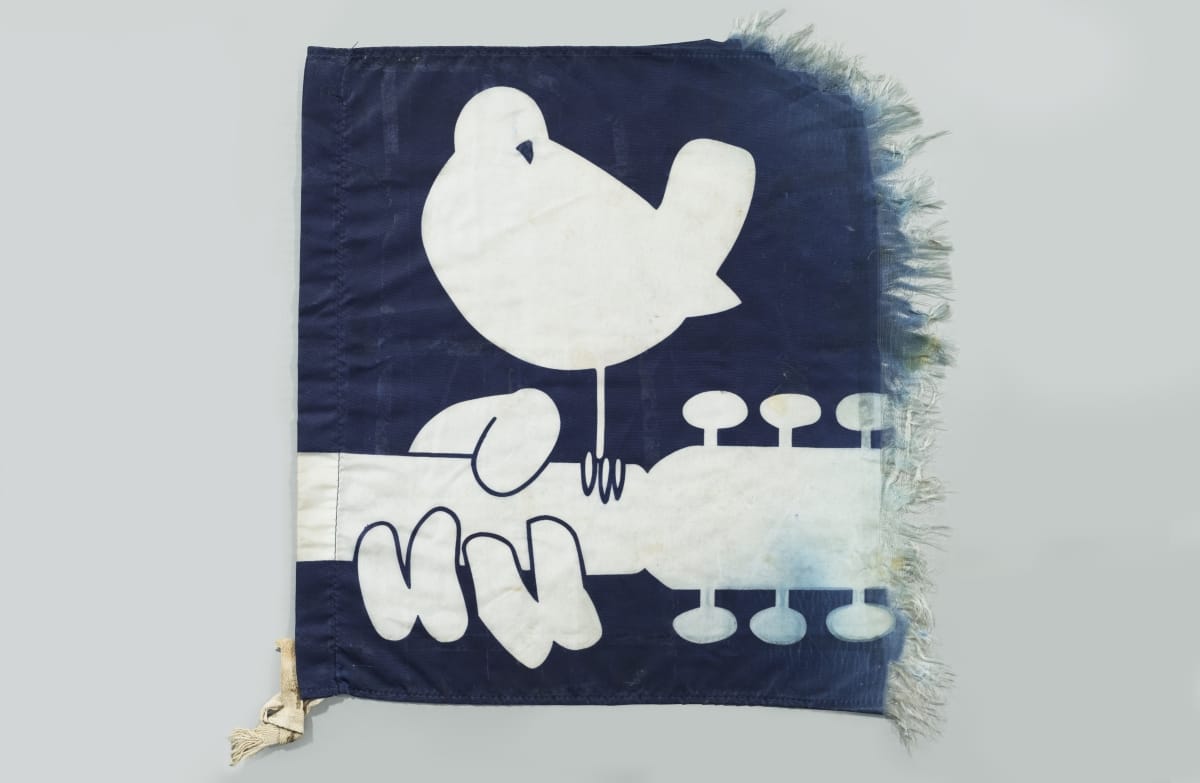 This flag was at Woodstock, too--a witness to this legendary event that reflected the 1960s counterculture movement’s quest for freedom and social harmony.

Flags like this one were provided to vendors, musicians, and technical crew to allow them access to the Woodstock Musical Festival grounds at Max Yasgur’s 600-acre dairy farm in upstate New York during the August 1969 event. They were to fly the flag from their vehicles or attach it to their booths.

Woodstock’s organizers--none of whom were over 27-- billed the event as “An Aquarian Exposition: Three Days of Peace and Music.” Held from Friday, August 15 and extending into the early morning of Monday, August 18, the music festival featured 32 iconic performers including Joan Baez, Creedence Clearwater Revival, Janis Joplin, The Who, the Grateful Dead and Jimi Hendrix.

There was a lot that went right with Woodstock. And many things that didn’t. The free-spirted and peaceful audience was filled with excitement and the musicians turned in electrifying performances. But the inexperienced organizers found their planning for this unprecedented event enormously inadequate--especially since they had to find a new venue only a few weeks before the concert.

The original location--an industrial park near Woodstock, New York--pulled out only a month and a half before the event.  Fortunately, two weeks later Max Yasgur agreed to rent his Bethel, New York farm as the new venue. Nathan’s Hot Dogs--Coney Island’s famous vendor--pulled out when the location of the festival was moved.  Two weeks before the concert, the organizers hired Food for Love, a trio with little experience in the food business. Larger food-vending companies hadn’t wanted to take on Woodstock--no one had ever handled food services for such a large event. Many were reluctant to put in the investment required--what if the festival didn’t draw enough of a crowd to make a profit?

Woodstock’s organizers had told the Bethel authorities that they expected no more than 50,000 people. As the event drew near, with 186,000 advance tickets sold, 200,000 concertgoers seemed a more likely estimate. The organizers then hurriedly tried to bring in more toilets, more water, and more food. Woodstock would ultimately draw an inconceivable number--over 400,000 concertgoers.

The roads around Bethel became jammed for miles with people heading to the concert. Many abandoned their vehicles and made the long walk in. The plugged roads would also make it extremely difficult to get needed supplies in.

The stage, parking lots, and concession stands were barely finished in time for the event. Concert-goers started arriving two days before--with the ticket booths and gates still uncompleted. Since people were able to just walk in, the organizers were forced to declare it a free concert--creating a monumental debt for them. (Though profits from a soundtrack and movie made from films of the Woodstock Festival would help bring down the debt.)

Most concertgoers arrived expecting to be able to purchase food. Food for Love concessions were quickly overwhelmed.  Food became very hard to find. The Hog Farm, a West Coast commune hired to help with security, stepped in to help. They provided free food lines serving brown rice and vegetables--and granola. For some of the crowd, granola was nothing new. But for many it was. Granola would soon become the iconic food of the hippie era.

When the people of Sullivan County, where Yasgur’s farm was located, heard reports of food shortages, they gathered thousands of food donations, including 10,000 sandwiches, as well as water, fruit, and canned goods. Concertgoers who had brought their own food shared what they had with others.

It rained off and on during the event, interrupting or delaying performances--and creating a sea of mud. There weren’t enough receptacles for garbage.  People waited an hour to use one of the portable toilets--then finding it an extremely unsanitary experience when they finally reached the front of the line.

Yet--despite unbelievably crowded conditions with wall-to-wall concertgoers, massive traffic jams, serious food shortages, no running water, no telephones, no electricity (except for the performance stage--and even that was sketchy at times), lack of sufficient restroom facilities, and the muddy quagmire--Woodstock was a place of communal peace and sharing for the three days of the festival. There were no reported incidents of violence among this gathering of over 400,000 people.

In the end, Woodstock wasn’t really about the food, the weather, or even the lack of creature comforts. For many who attended, Woodstock was about experiencing three days of legendary rock and roll music, being part of a peaceful community with hundreds of thousands of other young people, and immersing yourself freely and fully in the moment.  (And, yes, free love and drugs in addition to rock and roll.) The Woodstock concert logo on this flag--the guitar and dove of peace--sums up the idealism of many of Woodstock’s concertgoers.

This flag’s faded and tattered appearance seems to suggest the logistical challenges of Woodstock. But it is more likely that its owner displayed this treasured keepsake for years after--the flag couldn’t fade this much or get this tattered in just three days. Instead, this flag attests to the eternal staying power of Woodstock as a cultural landmark for an entire generation of American youth--and for the nation.

Woodstock captured, vividly and indelibly, the spontaneity and free spirit of the counterculture movement of the 1960s--and its vision of freedom and social harmony that would ignite change in American society during the coming years.

Woodstock has left its “mark”--not only in memory--but in archeology. Binghamton University’s archaeology team can really “dig it.” In 2018, they determined the location of the stage. By analyzing rocks and vegetation, they also located the area of the vendors’ booths, known as the Bindy Bazaar.