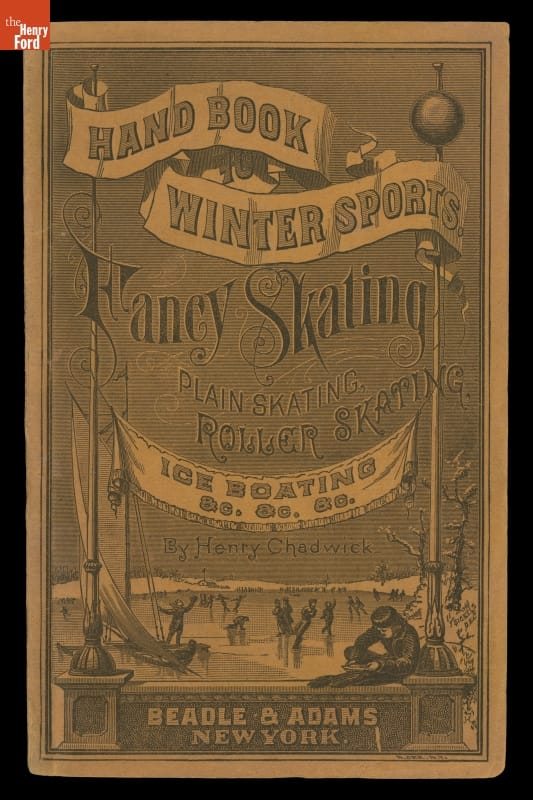 The above quote appeared almost 130 years ago in the small but richly detailed Handbook of Winter Sports. Written by Henry Chadwick, this 1879 handbook provides a fascinating glimpse into the sports that excited and engaged Americans at the time. Sportswriter and promoter Henry Chadwick spent much of his career helping to make baseball America’s “national game.” His ongoing desire to increase Americans’ devotion to “physical exercise and healthful outdoor recreation” is clear in many of the passages of this winter sports handbook.

With the Industrial Revolution cranking up after the Civil War, thousands of Americans flocked from farms and villages to cities for jobs in industry and business. The pressures and routines of the workplace caused many people to begin to view sports as a necessary outlet. Joining an amateur sports club or team provided a comforting feeling of community amidst the growing anonymity in American cities.

Some of the sports described in this handbook may seem a little unusual to us today, but they made perfect sense to Henry Chadwick and his readers back in 1879. 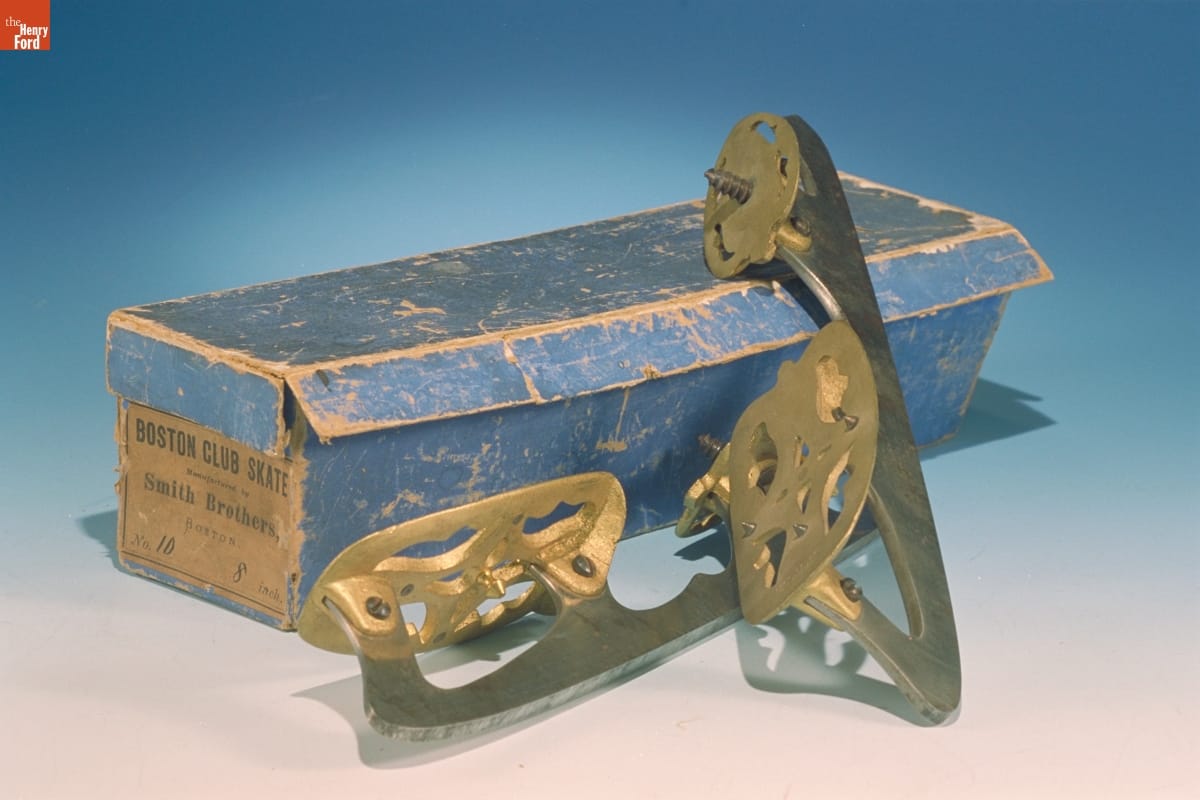 "The great outdoor recreation of the winter season in our northern clime is, undoubtedly, the invigorating and exciting exercise of skating."

Ice skating was America's first national winter sports craze. When New York City's Central Park opened in 1858, it became a fashionable pastime, both for men and for ladies who wanted to “keep up with the times." Soon, all classes and ages of Americans were taking to the ice—on country ponds, in small-town parks, and at indoor rinks. 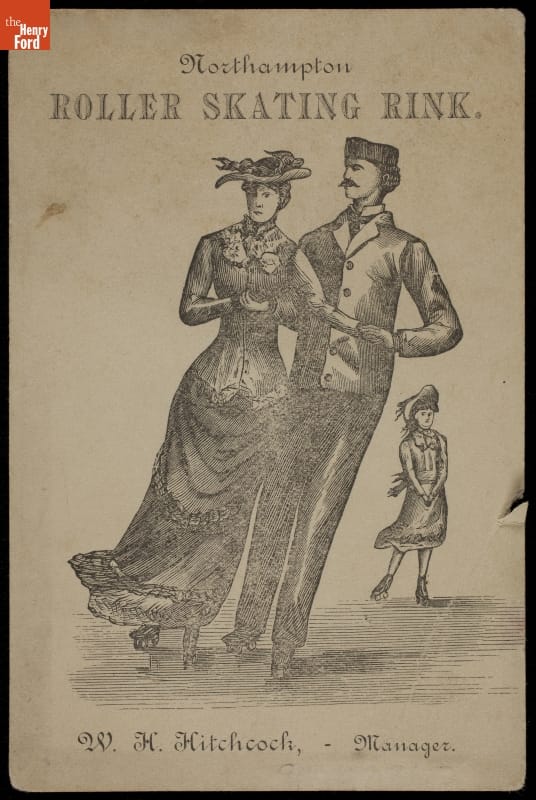 By 1879, roller skating was considered a perfect alternative to ice skating—especially for those times when the ice was too rough or too soft, or when "the keen blasts of the winter's wind are too severe." Roller skating would become a huge craze in the 1880s, when almost every city and town had its rink. Story even has it that the upstairs of the J.R. Jones General Store, now in Greenfield Village, was used for roller skating for a time—probably in the late 1870s or early 1880s—back when the store was at its original location in Waterford, Michigan. 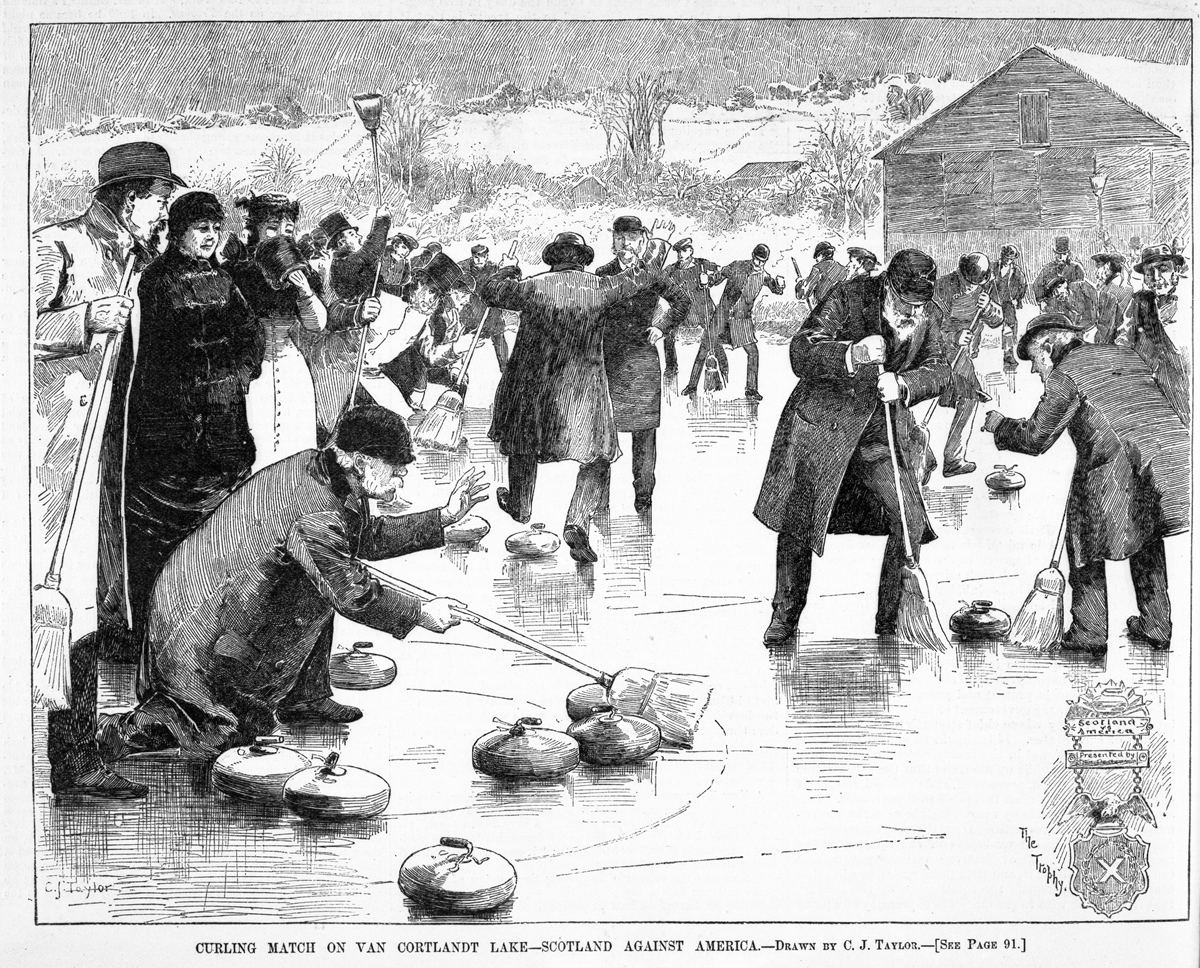 "Curling is a game worthy of the hardy Scots, calling into play … most of the characteristics of manliness…"

In the sport of curling, teams of players slide slightly flattened, round granite stones to a designated spot on the ice. From Scotland, curling spread to Canada—where it took permanent hold. Although this sport showed sure signs of popularity in America in the 1870s, it would never have as passionate a following as it did in Canada. 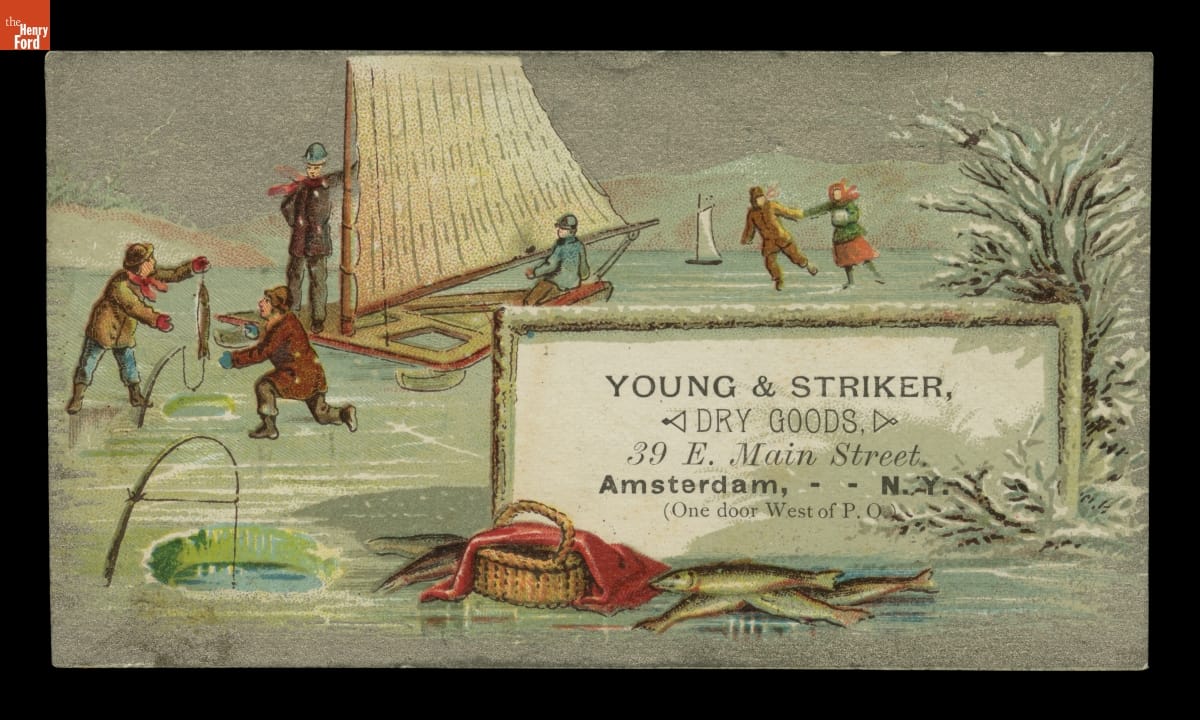 Ice-boating is part of this idyllic winter scene, from a trade card for the Young & Striker dry goods store in Amsterdam, New York, around 1890. / THF125112

"…for thrilling excitement [ice-boating] surpasses every other [sport] in vogue."

Ice-boating probably originated in the Netherlands, where frozen canals and lakes became speedy highways during the winter months. This sport's early popularity in America centered around the Hudson River, where ice-boating became a mass spectator sport during the 1870s. Simple ice boats evolved into great ice "yachts"—designed for stability and speed. 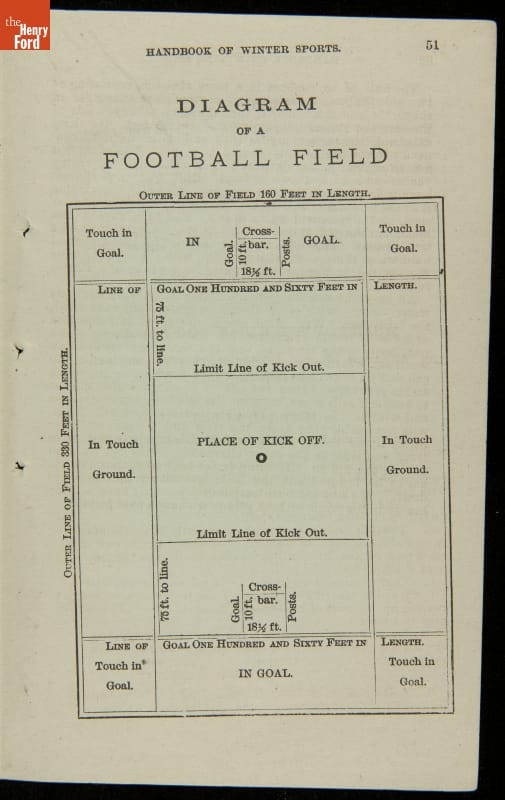 This is the first known diagram of an American football field, pictured the 1879 Handbook of Winter Sports. / THF231598

"The game of football is called the 'national winter game' in England, because it is played there throughout the winter season."

Americans don't generally think of football as a winter game. Even Chadwick admitted that "in all but the Southern states, it can only be played during a portion of the winter season, when the snow is off the ground." But by 1879, football was showing definite promise as an up-and-coming American sport. So Chadwick seized the opportunity to document its rules and publish the first known diagram of an American football field in this handbook.

Football, which evolved from the English game of rugby, first became popular as a collegiate sport. The rules of play for the American version of football continued to evolve into the 20th century. Professional football would not come of age until the 1920s. 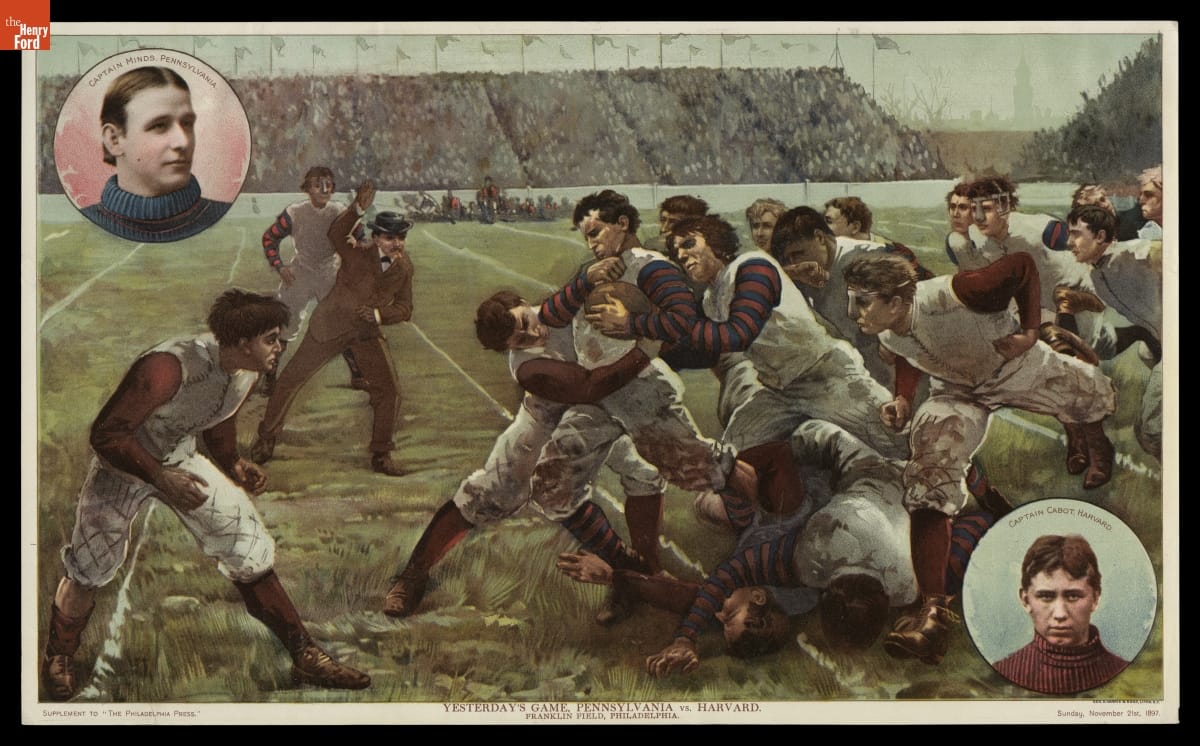 This 1897 football game shows the rough nature of the sport at the time, predating the use of helmets and padding. / THF117849

The American refinements to English rugby rules included reducing the number of players from 15 to 11; assigning players to specific positions; changing rules for running, kicking, and passing the ball; and replacing the rugby huddles, or “scrummage,” with a clearly defined line of “scrimmage.” As the game became Americanized, it focused more on speed and finesse—with a new emphasis on passing—and away from brute force and roughness.

What's Missing from the 1879 Handbook? 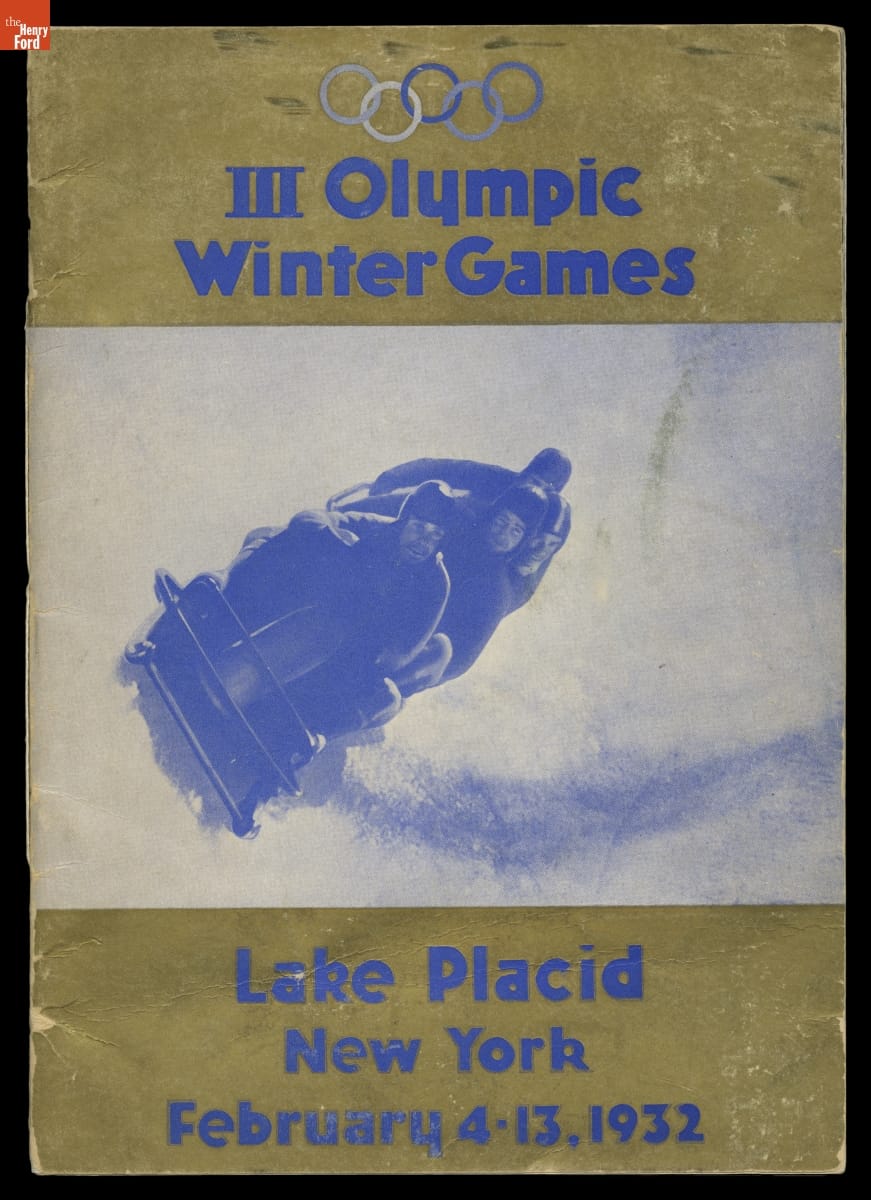 So what about the winter sports we think of today—like basketball, hockey, and skiing?

Basketball was devised at a Y.M.C.A. in 1891 as a way to keep athletes in shape over the winter months. This sport quickly spread to school physical education programs for both boys and girls. It did not go professional until 1946. Skiing was brought to America by Scandinavian immigrants during the late 19th century. Ice hockey came to the United States as an organized sport from Canada during the 1890s. Amateur, youth, and collegiate teams were popular before professional ice hockey gained a national following during the 1920s.

More than any other sports event, the international Winter Olympics (begun in 1924) heightened Americans' interest and enthusiasm for winter sports—especially after the Olympics came to Lake Placid, New York, in 1932.

The pastimes and sports described in the 1879 Handbook laid the foundation for Americans' passion for winter sports. Many winter sports became faster and more competitive. They came to be played by men and women of all ages and provided outlets for people from many different walks of life.

Some winter sports—like football, basketball, and hockey—have become mass spectator sports. However, many others—like sledding, skating, and snowshoeing—still provide opportunities for healthful recreation and, as Chadwick put it back in 1879, "a wonderful power of exhilaration attendant upon breathing the pure oxygen of a winter atmosphere."

You can read the entire handbook in our Digital Collections here.


Donna R. Braden is Senior Curator and Curator of Public Life at The Henry Ford. This post was adapted from the January 2007 entry in our former Pic of the Month series.