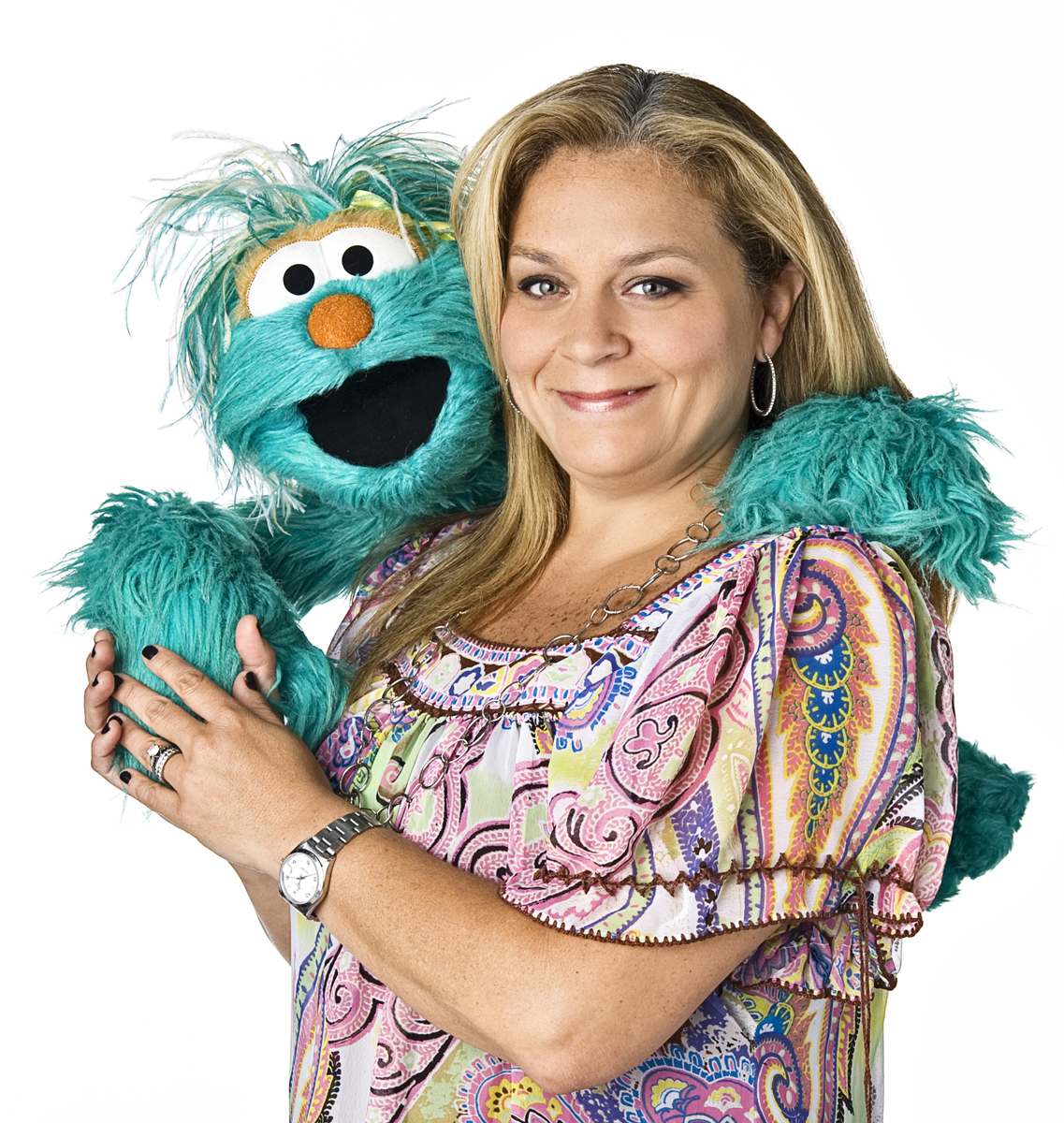 Carmen Osbahr-Vertiz shares her journey to becoming a professional puppeteer, how she met Jim Henson, and what it’s like being a part of the Sesame Street family.

As a curator at The Henry Ford, I gained renewed appreciation for Jim Henson while researching the 50th anniversary of Sesame Street in 2019, then again while commemorating Henson’s legacy on the 30th anniversary of his passing in 2020. So it was with great anticipation that I looked forward to interviewing Carmen Osbahr-Vertiz, puppeteer for the Sesame Street character Rosita and someone who had worked for and personally known Jim Henson.

Carmen enchanted us with her stories: growing up in Mexico; her personal interests and love of family; her passion for puppetry and how this turned into her involvement with Jim Henson Productions; how she helped create her Sesame Street character, who was vibrant, outspoken, and passionate—much like Carmen herself.

Carmen struck us as fearless—a young, raw talent beating out more seasoned professionals for work, leaving Mexico behind to attend a puppetry workshop in New York City because she desperately wanted to learn more, and staying there because Jim Henson himself asked her to. She regrets that she never returned home, but recognizes that, through her work, she can proudly represent and keep close to her heart her love of her homeland, community, and family.

Did you know from an early age that you wanted to work with puppets, become a professional puppeteer?

No. Of all my friends growing up in Mexico City, I was the one who had no idea what she wanted to do. Nothing that gave me a sign. At one time, I thought I wanted to go to the Olympics—I was good in sports, very competitive. I even wanted to work with and talk to the dolphins until I found out about all the science I would need.

When I was 5 or 6 years old, I did love to watch Topo Gigio [a character on a children’s puppet show on Italian television in the early 1960s] every Monday on TV. He was so alive. And then when I was 8, I remember having a playdate at a friend’s house watching Plaza Sésamo [Mexico’s Sesame Street, one of the first international co-productions of the show, which started running in 1972] for the first time. We laughed and sang.

I think my curiosity was there—I wanted to know how they did it. I watched the Muppets, too, when that show came out. But I didn’t know much about Jim Henson until a friend of my brother brought me a book, Of Muppets and Men [Of Muppets and Men: The Making of the Muppet Show, written by Christopher Finch], when I was in high school. The book had pictures of the puppeteers and explanations on how they did it. It was the first time I saw how it worked, and it blew my mind that they had to work with their arms above their heads, that they did the voices themselves.

Was reading that book your light bulb moment?

The light bulb really went on for me when my brother, who was working for Televisa [a Mexican mass media company] at the time, invited me and my friends to attend a workshop with Americans for a children’s show that had puppets. I was the only one called back. I was with a bunch of professional actors from university—the youngest in the group at 18 with no idea of acting. On the third day of the workshop, they brought the puppets out, and we had to work with the cameras and monitors and learn how, when you move the puppet one way, it appears the other way on the monitor—it’s inverted. That is when it really clicked for me. I started remembering all I had watched on TV, how the puppets breathe and walk. They live. I was mesmerized by the challenge to make this thing with no expression have expression. 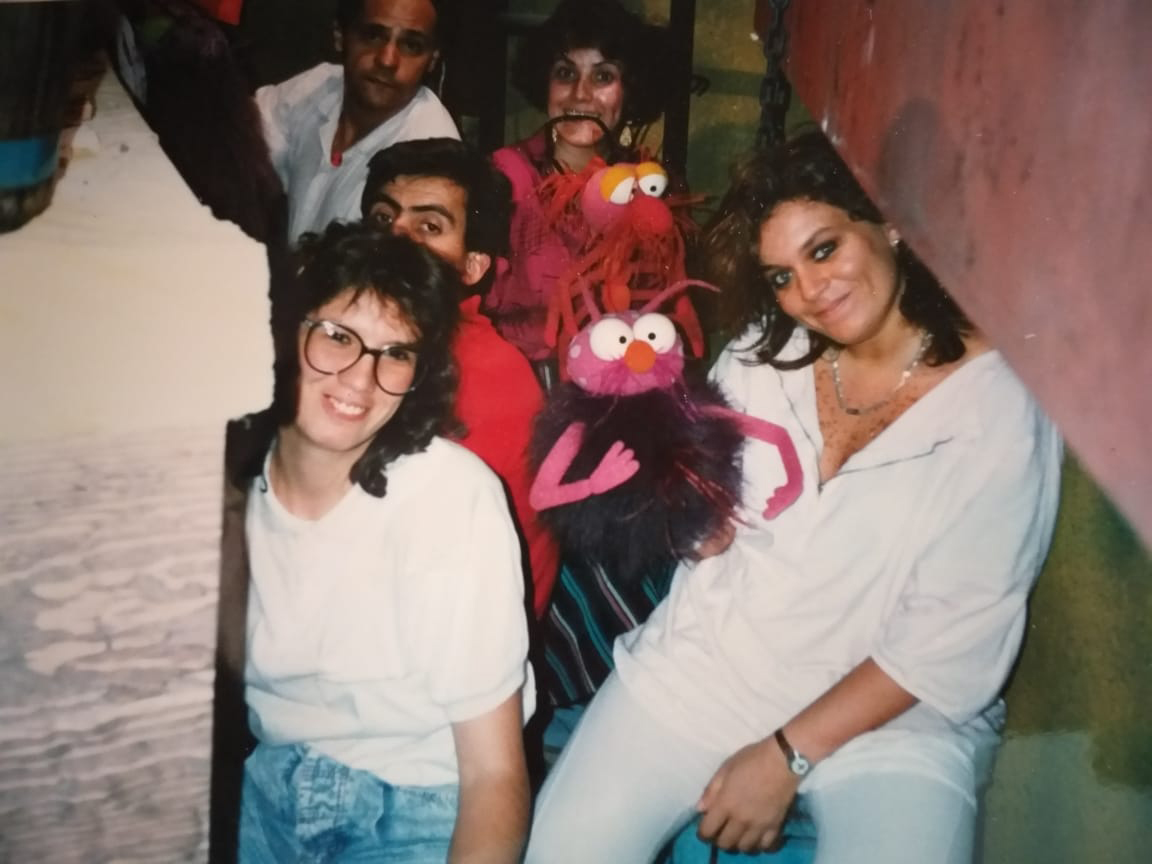 While working on the children’s television show Super Ondas for Mexican mass media company Televisa in the 1980s, Carmen Osbahr-Vertiz (at right) was one of a small group of professional female puppeteers in the industry. / Photo courtesy of Carmen Osbahr-Vertiz

I loved it. I was in heaven. While the professional actors were having problems because their expressions were happening below, not above, I was making this puppet come alive. It didn’t matter that I was shy or didn’t have the acting skills.

I think my brother knew when he invited me to that workshop. After that, it all came together for me—why I loved the puppets, the magic, the joy, the curiosity.

And I got a job working for Televisa.

How did you cross paths with Jim Henson?

I was working as a puppeteer at Televisa on The Treasure of Knowledge show when I met Kermit Love from the Henson group. He was in Mexico to train puppeteers from Plaza Sésamo. I asked him if he could help me. I felt that I was the only person in Mexico that was passionate about the puppets, that I had respect for them that no one else did. Most puppeteers were actors who were quick to move on to other things. I started asking questions about why we couldn’t do our own voices. I wanted to get better at my craft. I wanted our work to be better.

Kermit invited me to the U.S. to attend a workshop. So I went to Manhattan. One day, he came by and said, “We’re going to a party. Here’s your mask.” Suddenly, I was at a masquerade party thrown by Jim Henson at the Waldorf Astoria. That’s when I met Jim for the first time. It was so amazing. He was so amazing. He invited me to come observe production of his next season of Sesame Street. Just to see them working as a team. They were brilliant, geniuses, magicians. I thought to myself I would love to stay here. This is a dream.

When Jim did call me and said he decided he wanted me to be a part of the Muppet family, that he wanted a strong female puppeteer, I raised my hands and was like, “WAAAWWW!”

What role did you play in bringing your Sesame Street character Rosita to life?

When Jim was alive, he told me he always wanted a bilingual character for Sesame Street. I told him I didn’t really speak a lot of English. I was probably at 25%. He said no worries. We will work together. It will come out naturally. It’ll be fun.

Designer Ed Christie first asked me to help write a bio for my character because he wanted to create someone I would be comfortable with. So I told him I wanted her to be colorful and present. We Latinos like to hug and kiss. She needs to be cuddly with flowing hair. I wanted her to play the guitar and be musical like I was.

I wanted to name her Rosita, after my best friend in Mexico City, Rosa. I really liked the idea of how people could R the R’s—RRRRRosita.

Ed heard all that and made a puppet that wasn’t tiny but had a presence. She has a round belly, live hands and wings like a flying squirrel. He said he designed her like that thinking of a flamenco skirt. And she’s turquoise, which is an important color in Mexican culture, representing life and hope.

I just loved her from the start. Rosita is my immigrant girl, a happy, family-oriented monster that speaks better English than I do. She’s confident, doesn’t mind making mistakes and has explosive feelings.

Is it difficult to bring Rosita’s explosive personality to life?

When you’re a puppeteer, you quickly learn that it is not just about your character above. It’s also about the layer underneath.

We are in a very physical situation that is often very uncomfortable. You can’t be claustrophobic and you can’t be smelly. We all joke about eating no onions or garlic, brushing your teeth.

With Rosita, I have someone else doing her right hand as well, so he has to match what I am doing so carefully. If you move the puppet slightly the wrong way, for example, it won’t look like it is listening. It is very specific, and you’re sharing a small, cramped space with others, looking at monitors and trying to work in extremely coordinated ways. 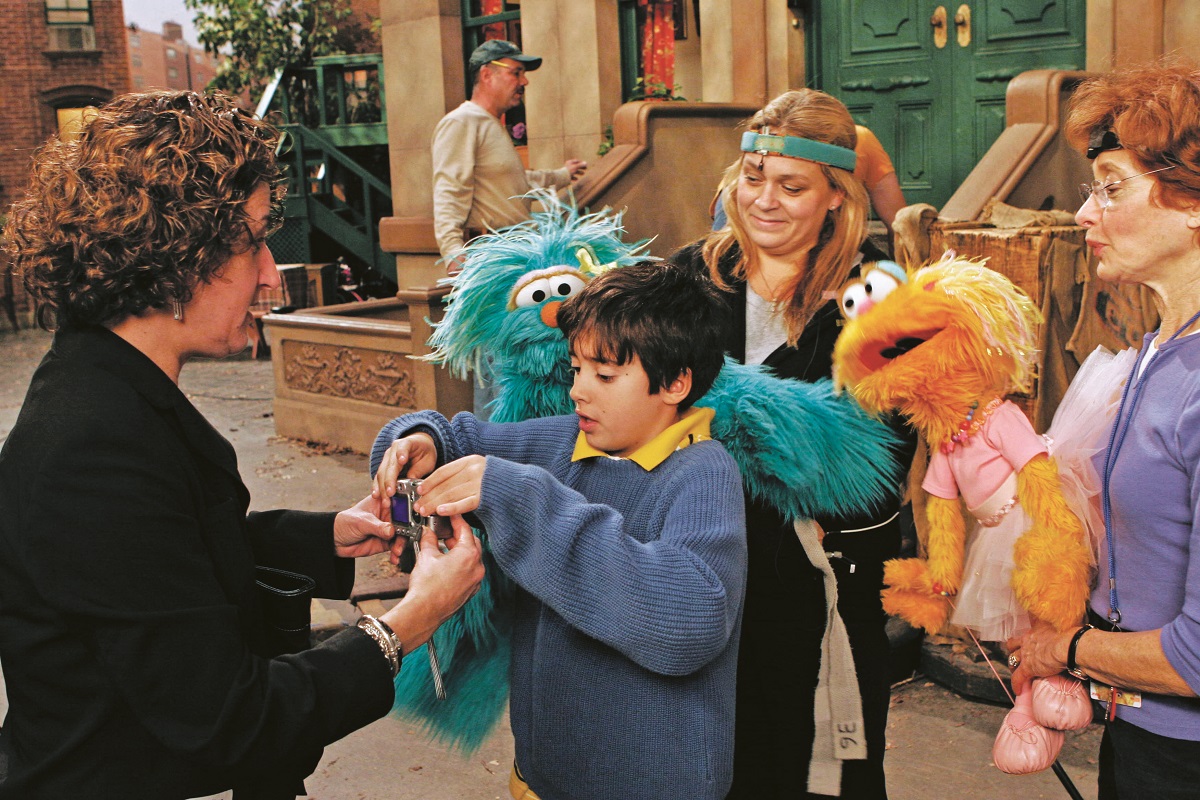 As puppeteers, we are solving physical problems all the time, learning new ways to trick the cameras into presenting our characters as living, breathing things. It’s about subtle movements, creating reactions that match with the other characters.

In your creative community, in the entertainment industry in general, do you feel as if Jim Henson’s legacy is still alive and well?

Jim was amazing. His mind was brilliant. He was curious and put together this world around all the things he liked. He was ahead of his time, and we keep trying to keep his legacy alive because he had it right.

For me, I can see that he still touches people. I have so many young people come up and say, “I want to be a puppeteer. Jim Henson changed my life.” And so many of them are very, very clever. They are bringing all of these new ideas and technologies to the conversation. I’m so proud of everyone that comes to us that were inspired by Jim. It’s so rewarding.

What about with audiences? Does Jim’s vision resonate with the next generation?

I know animation is where it’s at today, but it’s just so flat, and Jim’s characters are just so alive. When we did Sesame Street’s 50th anniversary concert live a few years ago, I was so worried about the audience’s reaction to seeing us rolling around, sweating on the stage. What I felt instead was absolutely incredible. I saw grandparents with their grandkids, parents with their children singing and crying, connecting with each other. Because of Jim. It was so touching, so inspiring.

In terms of your impact, how has your career influenced others? Can you speak to the appreciation you have for how your role as Rosita is helping children learn and grow?

What this job has brought to me has been amazing, and impact really goes both ways. The impact Rosita has had on others and the impact people have had on my life because of her. 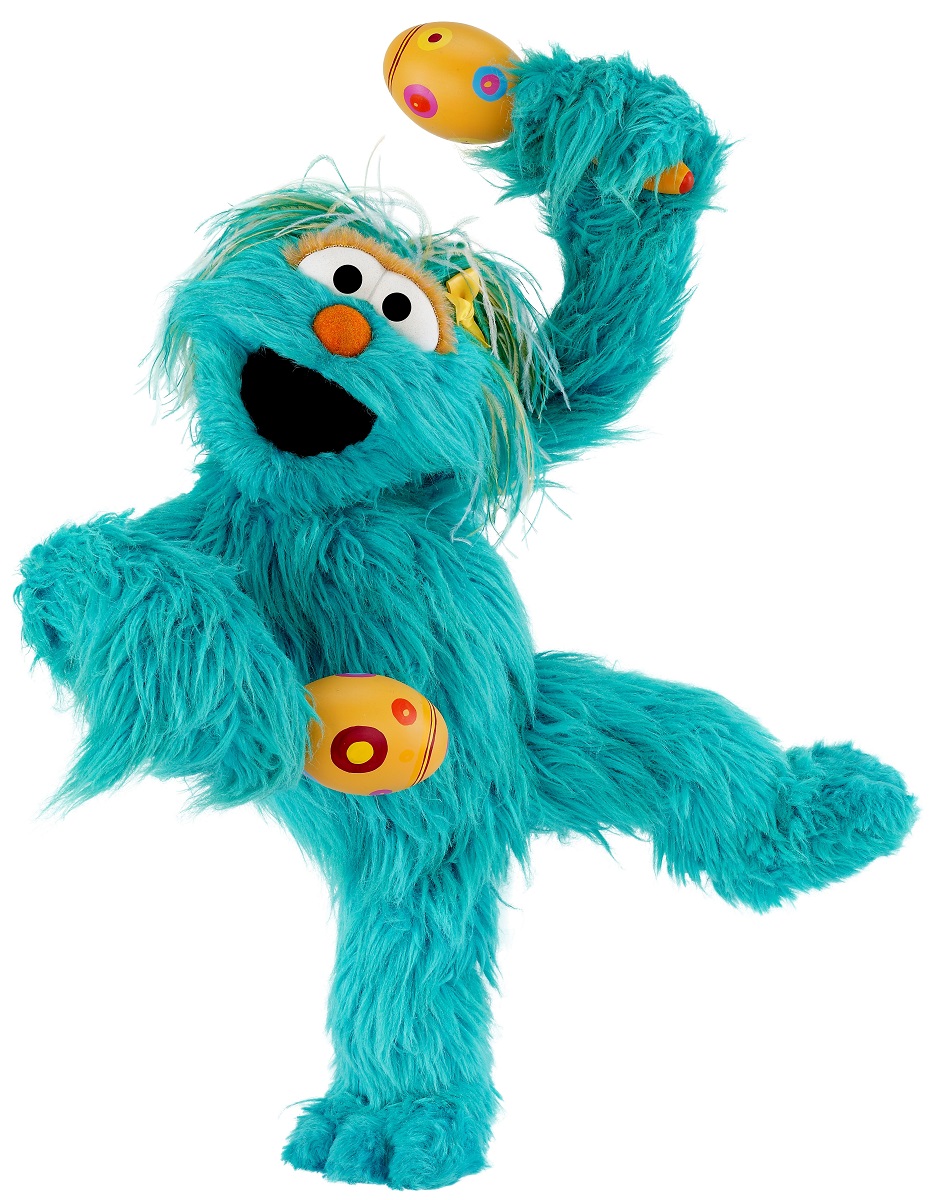 Rosita is part of lots of outreach within communities where so many see her and the other characters as friends. Today, we are working on racial justice messages, and Rosita and I have also been working with military families for 10 years. We’ve created videos for young parents so they can help explain deployment to their children. We’ve also had a script where Rosita’s dad comes back home from a tour of duty and is injured and in a wheelchair. The words in that video—how military families have to deal with both invisible and physical injuries, the suffering they face and sacrifices they make—I took it very personally. I even asked myself if I thought I was ready to become an American citizen. It was something I had researched before, but I was never sure if I was ready—I’m so proud of my Mexican heritage. After working with military families, though, I said to myself that I was definitely ready, and I became an American citizen.