Microwave ovens gained popularity in the 1970s, becoming all but standard in American kitchens by the mid-1980s. These new appliances cooked food differently than conventional stovetop or oven methods, which worked by surrounding food with heat. In a microwave oven, electromagnetic waves caused food molecules to vibrate, creating heat that transferred from the outside to the center of the food.

Foods cooked much faster in microwave ovens than in conventional ones. For example, microwaving reduced the cooking time for a baked potato from 75 minutes to just four. And frozen meat pies, which could take 45 minutes to bake, would be ready after nine minutes in the microwave.

This time-saving cooking method promised convenience, but it took some getting used to, requiring adjustments to cookware and cooking techniques. Glass and plastic transmitted electromagnetic waves in microwave ovens, but metal reflected them, causing sparks that could damage the appliance or even cause a fire. Manufacturers had to develop heat-resistant cookware and cooking utensils safe for use in the microwave. 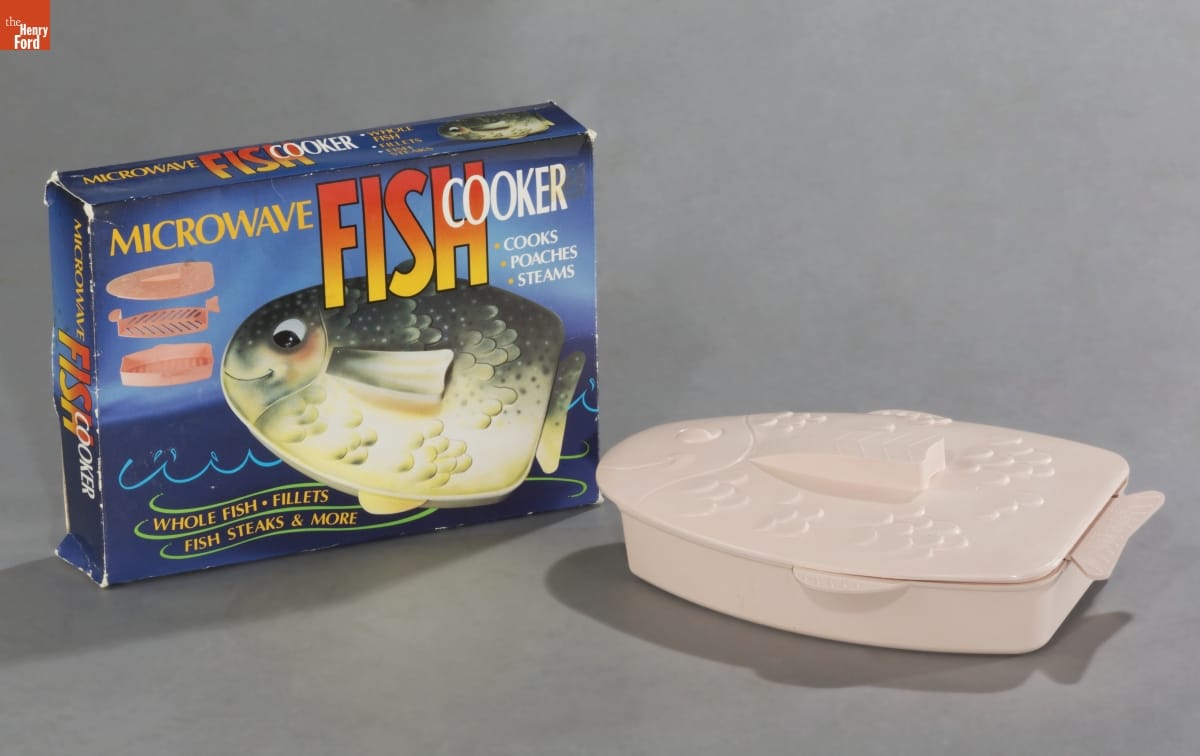 With specialized cookware and new cooking techniques, Americans could microwave a variety of foods (including fish) quickly, with familiar results. THF174103

In addition to purchasing microwave-safe cookware, Americans needed to learn new cooking techniques. Familiar foods required different preparation -- eggs had to be removed from shells and stirred to break the yolks, and potatoes needed to be pierced before cooking. People also had to change their expectations, as microwave cooking didn’t brown or crisp many foods the way conventional methods did. Meat could be cooked in the microwave -- with varying results. Specialized browning skillets provided some familiar texture and flavor to meats that would otherwise seem limp and unappetizing.

Microwave manufacturers included instruction manuals and recipe suggestions with the ovens they sold. Cookbooks also helped home cooks adjust. Some offered information on how to convert conventional recipes for microwave cooking, while others focused solely on recipes created specifically for the microwave. Two booklets from the collections of The Henry Ford offer a look at the early decades of microwave cooking in America. 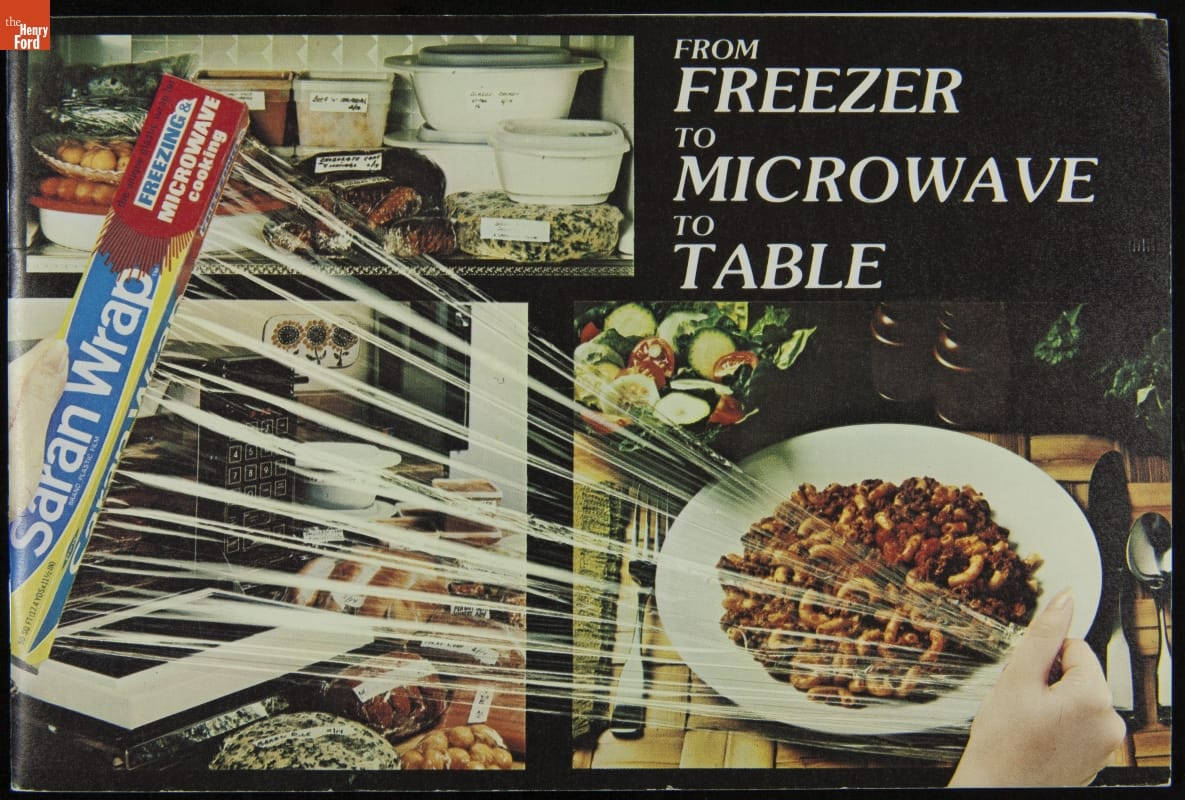 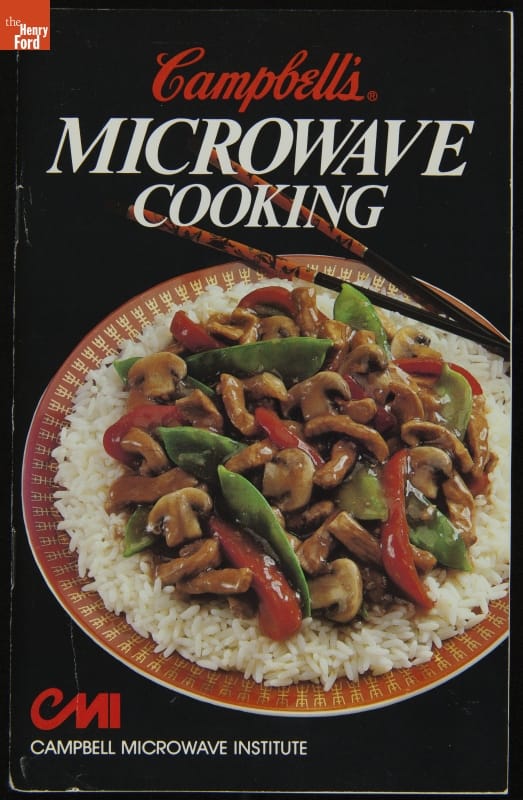 Some manufacturers published microwave cookbooks to promote their products. From Freezer to Microwave to Table (1978) encouraged people to use Amana microwaves and freezers and cover foods with Saran Wrap. Recipes in Campbell's Microwave Cooking (1987) called for ingredients made by the Campbell Soup Company.THF275056 and THF275081 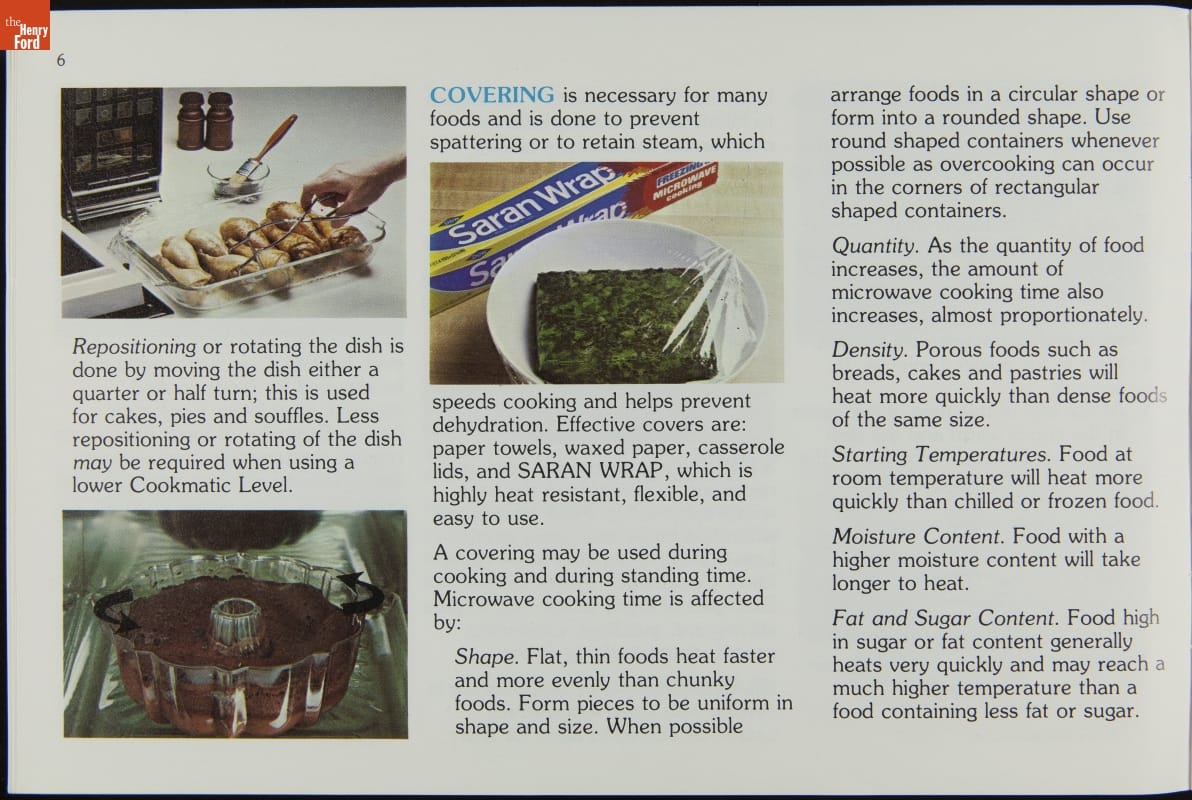 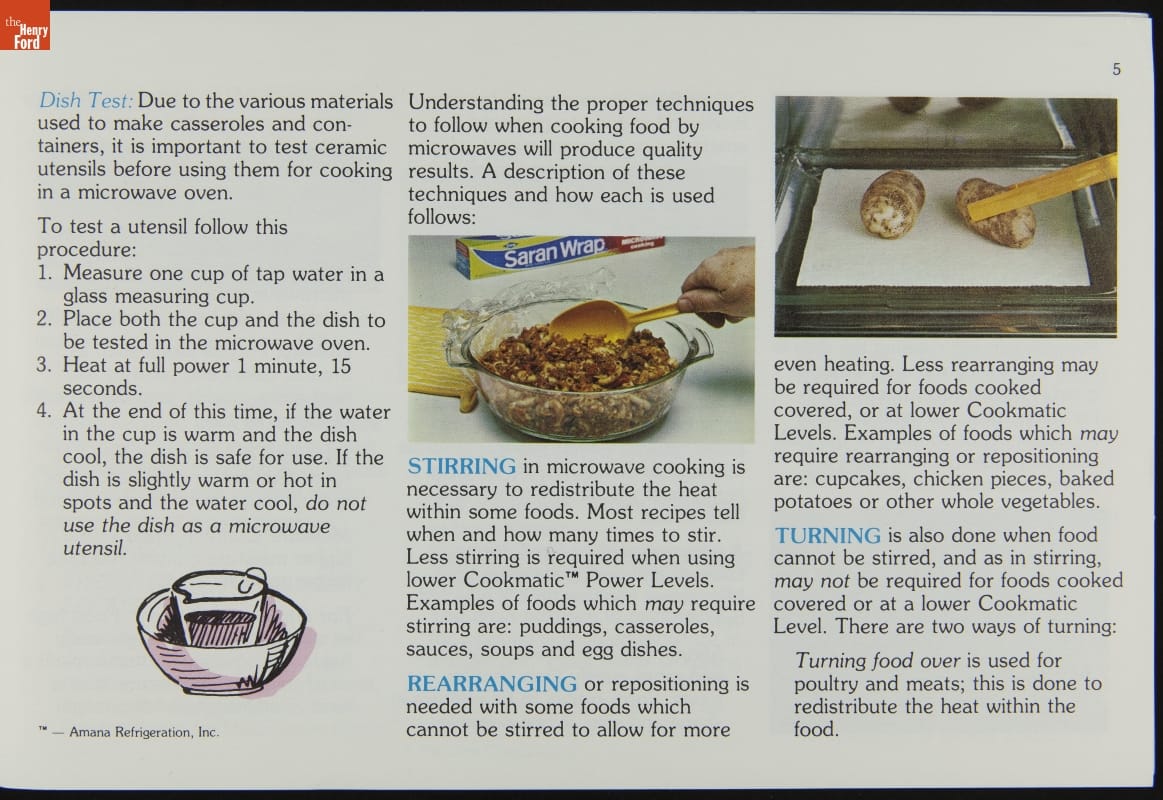 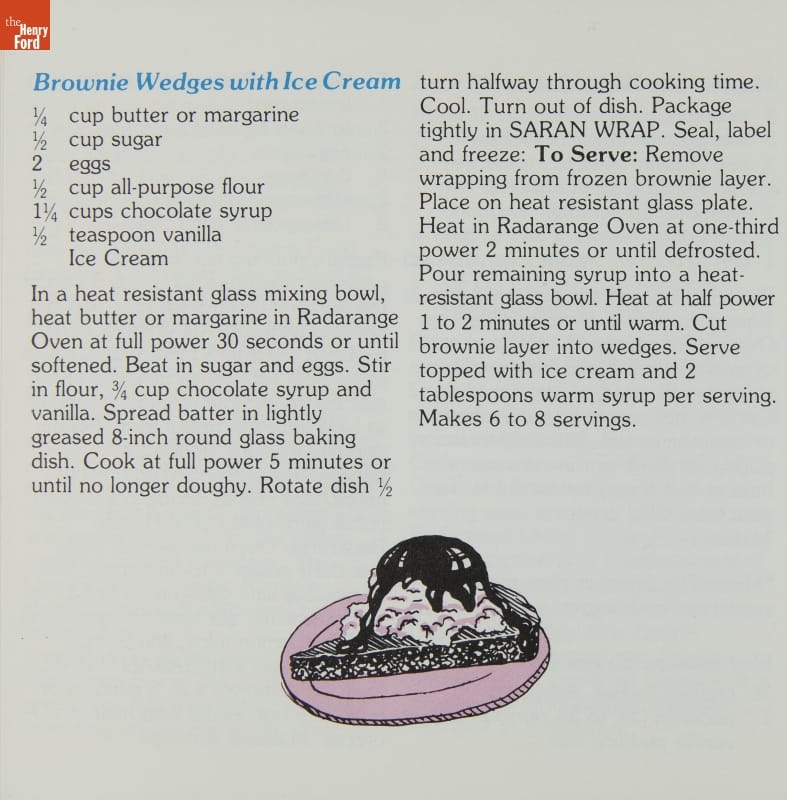 This brownie recipe reminded cooks to use heat-resistant glass dishes and included instructions for melting, baking, defrosting, and reheating in the microwave. THF27506 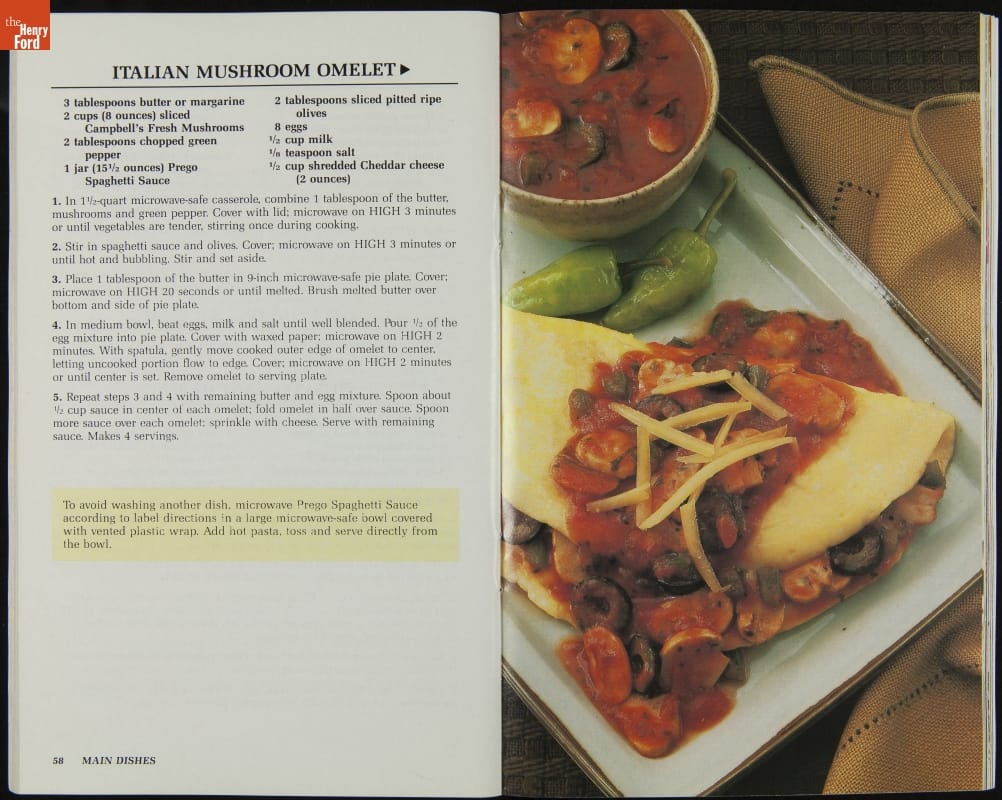 This omelet recipe with an Italian twist emphasized convenience and efficiency. It called for store-bought spaghetti sauce and required only two dishes for cooking--one of which, according to the suggestion highlighted in yellow, could be reused to sauce and serve pasta. THF275089

View these and other cookbooks at the Reading Room in the Benson Ford Research Center, and browse objects related to microwave ovens in our Digital Collections.