This is the first of a series of blog posts presented in conjunction with the traveling exhibition, Louis Comfort Tiffany: Treasures from the Driehaus Collection. The exhibit, consisting of approximately 60 artifacts, is on view at Henry Ford Museum of American Innovation from March 6, 2021, through April 25, 2021. All of the objects shown here are from the collections of The Henry Ford and provide background on themes in the exhibition.

In the 1890s, artists and designers in Europe and the United States attempted to create a modern aesthetic for the emerging 20th century. This aesthetic was consciously modern. The decorative style that emerged, Art Nouveau, featured bold color contrasts and organic lines, sometimes flowing gracefully and sometimes sharply undulating, like a whiplash. Artists and designers associated with this trend looked to nature as their guide. As they often said, there is nothing historical about nature, it is universal. This bookplate, created by French designer Rene Lalique, is derived almost purely from nature, although the floral forms are abstracted into sinuous and linear elements that we associated with French Art Nouveau of the 1890s and early 1900s. Even the letters of the name, “Emilie,” are rendered into organic shapes.

Increased communication and trade with Asia in the second half of the 19th century brought new design inspiration to Europe. Japanese woodblock prints particularly appealed to Art Nouveau poster and decorative designers, who incorporated asymmetry and contrasting colors in their own work. Notice the unmodulated areas of light colors against dark colors, which create pictorial depth. A major element of the Art Nouveau style, the sensual female figure was popularized by French poster artists like Jules Cheret and Alphonse Mucha. The illustrator of this Art Nouveau bookplate placed a woman at the center, used diagonal lines to create an illusion of depth (a technique derived from Japanese prints), and added stylized botanical motifs to frame the image. 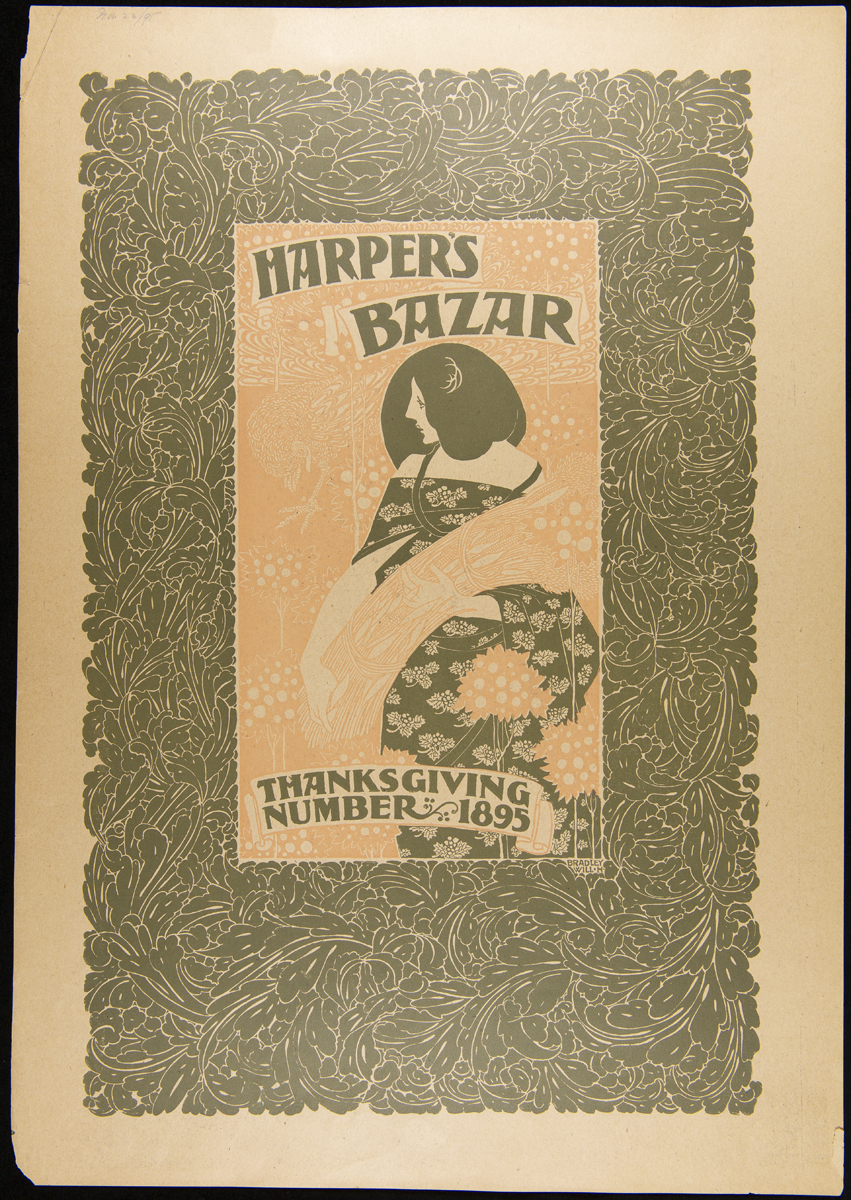 Art Nouveau in America came first as imported graphic art printed in Europe for an international audience. American illustrators, like the young Will Bradley, adapted these design elements for their illustrations in magazines and advertising posters. This poster promotes the Thanksgiving issue of the magazine Harper’s Bazar (which would later become Harper’s Bazaar) and appeared on newsstands in American cities from coast to coast. This poster is full of harvest and Thanksgiving symbols: the sheaf of wheat and the subtle turkey, suggesting the bounty of the season. The Art Nouveau elements include the organic whiplash floral forms and the female figure predominating the scene. 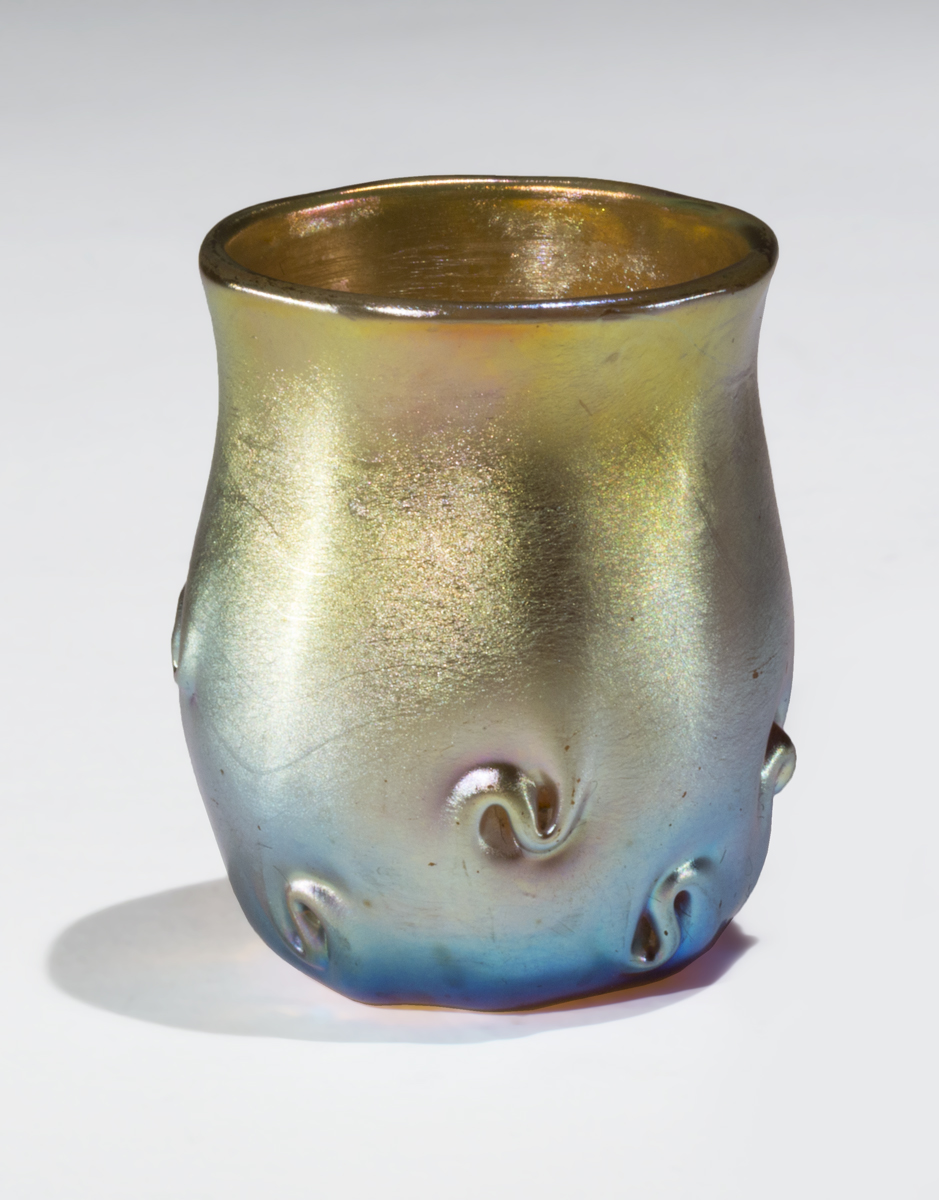 In the 1890s, American designer Louis Comfort Tiffany developed a process to imitate the iridescent shimmer of ancient, weathered glass. His "Favrile" line of art glass included organic forms characteristic of the Art Nouveau style, sometimes featuring abstract ornamentation, such as the design on this toothpick holder. 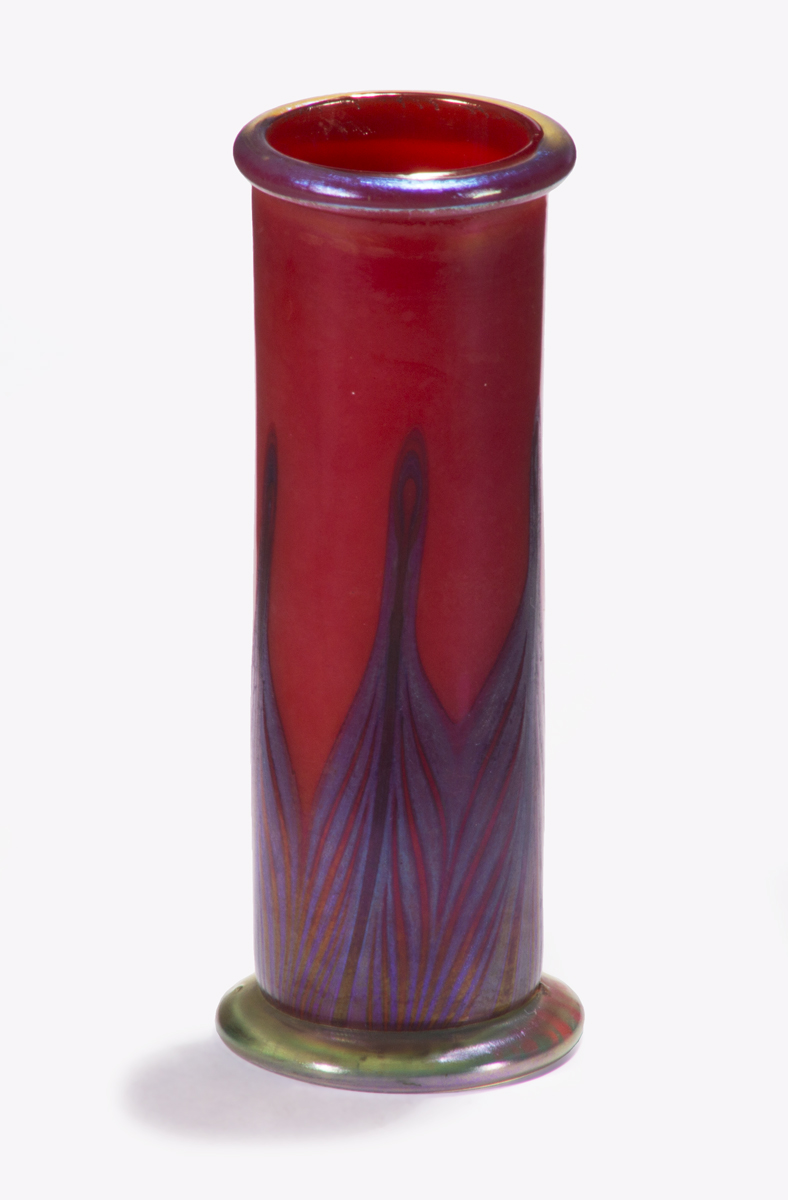 Tiffany’s small vase expresses the Art Nouveau trademark element of the peacock feather, which, like many Art Nouveau elements, has its roots in European design. Tiffany was renowned in America and Europe for developing the Art Nouveau into elegant, yet simple, products, as well as grand, large-scale objects like stained glass windows and elaborate electric lighting. 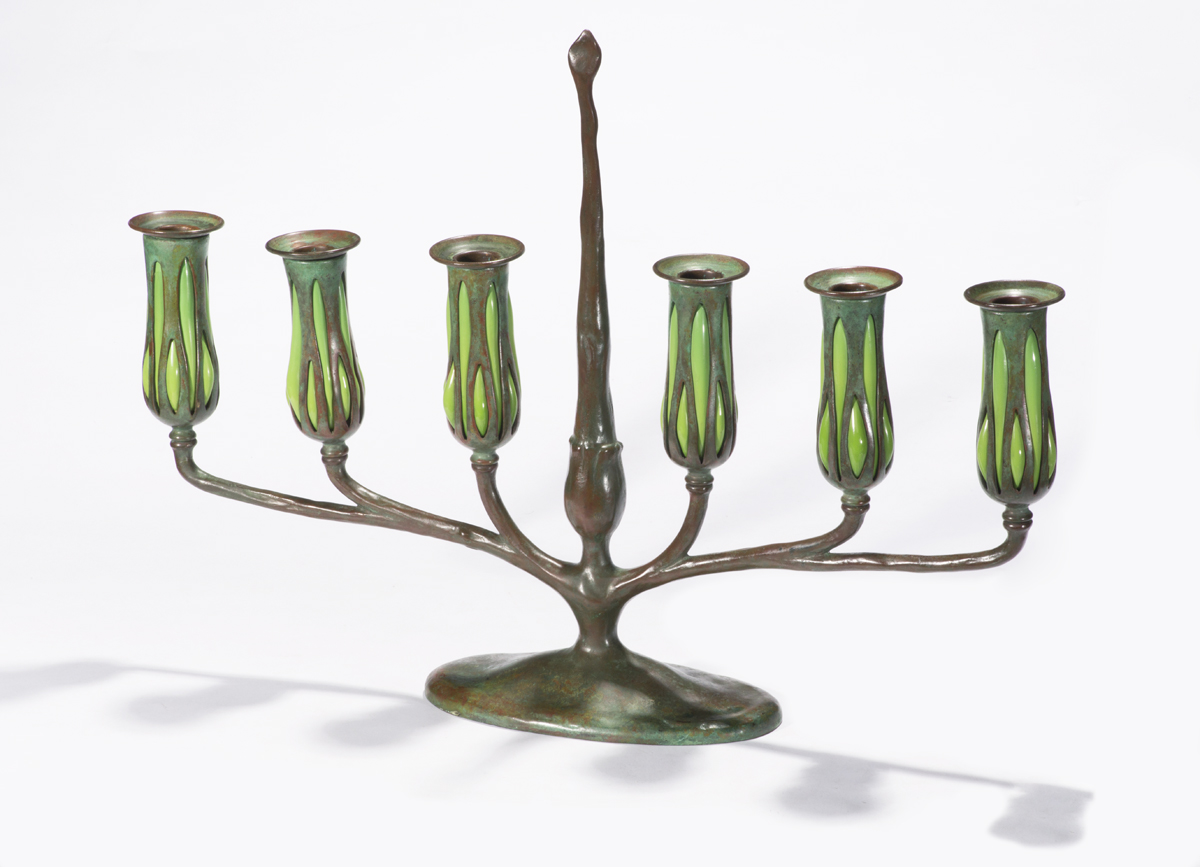 Tiffany Studios made a great variety of candleholders for upper middle-class clients. This model is described in the 1906 catalogue as simply, "6 lights, in a row, extinguisher on stem." The customer could choose from 11 designs of "candlestick tops," or standard interchangeable sockets, that were listed and priced separately. These included "long" or "short" metal or glass and metal tops in a variety of forms.

Around 1900, Tiffany started making large scale floor lamps—this is one of his first efforts. The fishscale-like shade is composed of his signature Favrile glass, which glows when illuminated. The bronze base features undulating spirals which rise up through the lamp’s shaft. The kerosene reservoir is covered with organic S- or wave-like patterns, all of which derive from Tiffany’s Art Nouveau vocabulary. 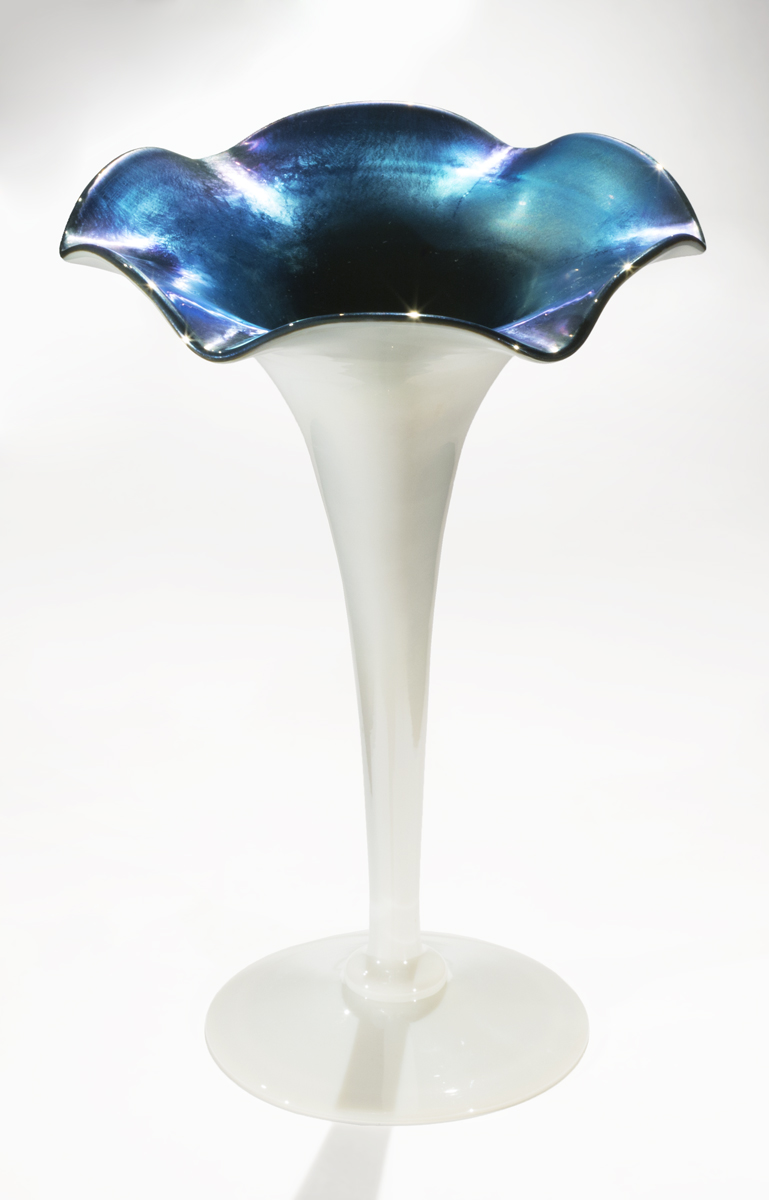 “Aurene” was the name that Frederick Carder used for his iridescent art glass at the Steuben Glass Works in Corning, New York. When Aurene was first produced, around 1902, Louis Comfort Tiffany sued Carder for copyright infringement. The courts found in favor of Frederick Carder and Steuben’s Aurene competed with Tiffany’s Favrile glassware. This elegant, floral-shaped vase combines a cased white outer shell with a dark blue iridescent interior and comes directly from the Art Nouveau vocabulary found in Tiffany’s production. 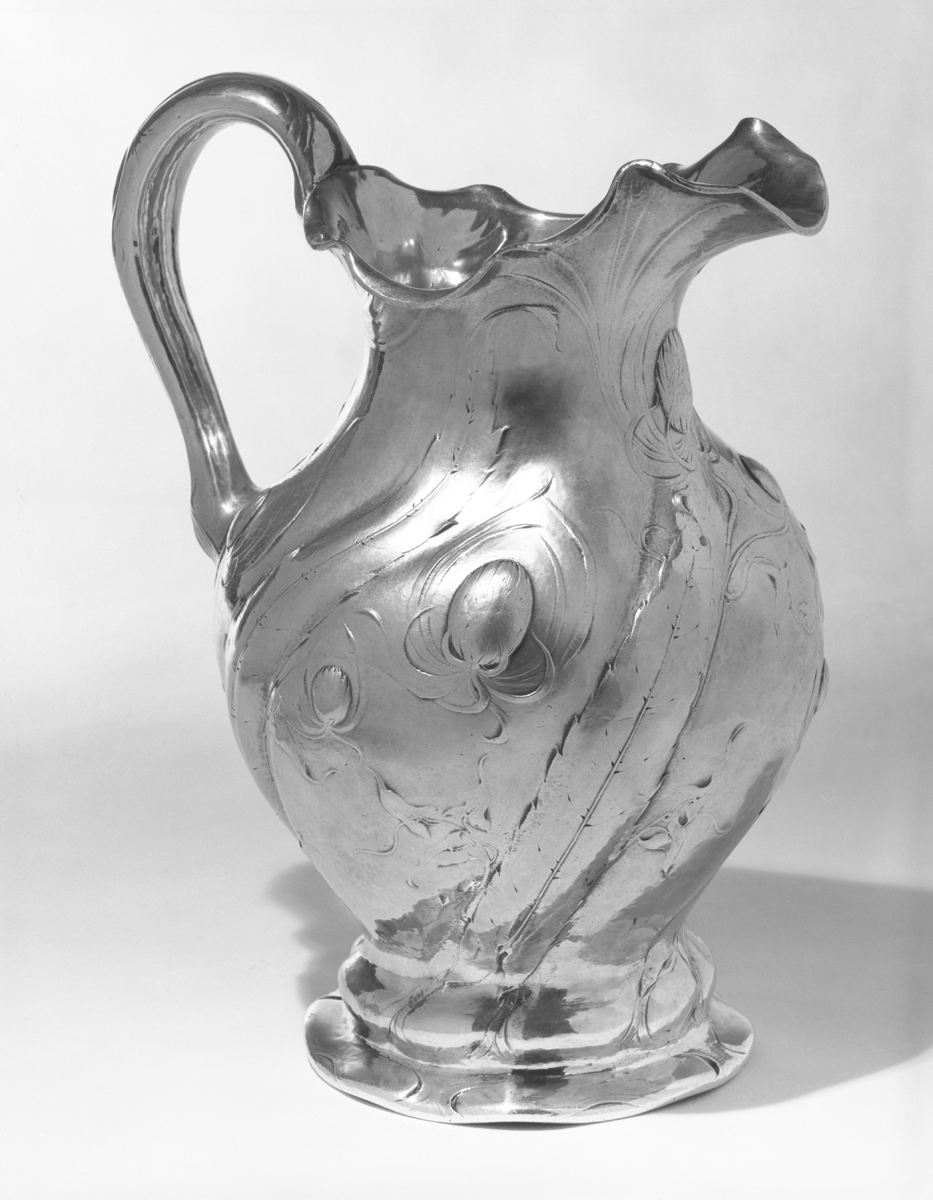 Like Steuben, the Gorham Silver Company of Providence, Rhode Island, produced its own line of Art Nouveau–inspired wares. Called Martele, meaning hand-hammered, this was one of Gorham’s high-end lines. This pitcher shows an organic swirl of motion, presumably sea water, with an octopus placed asymmetrically across the surface. 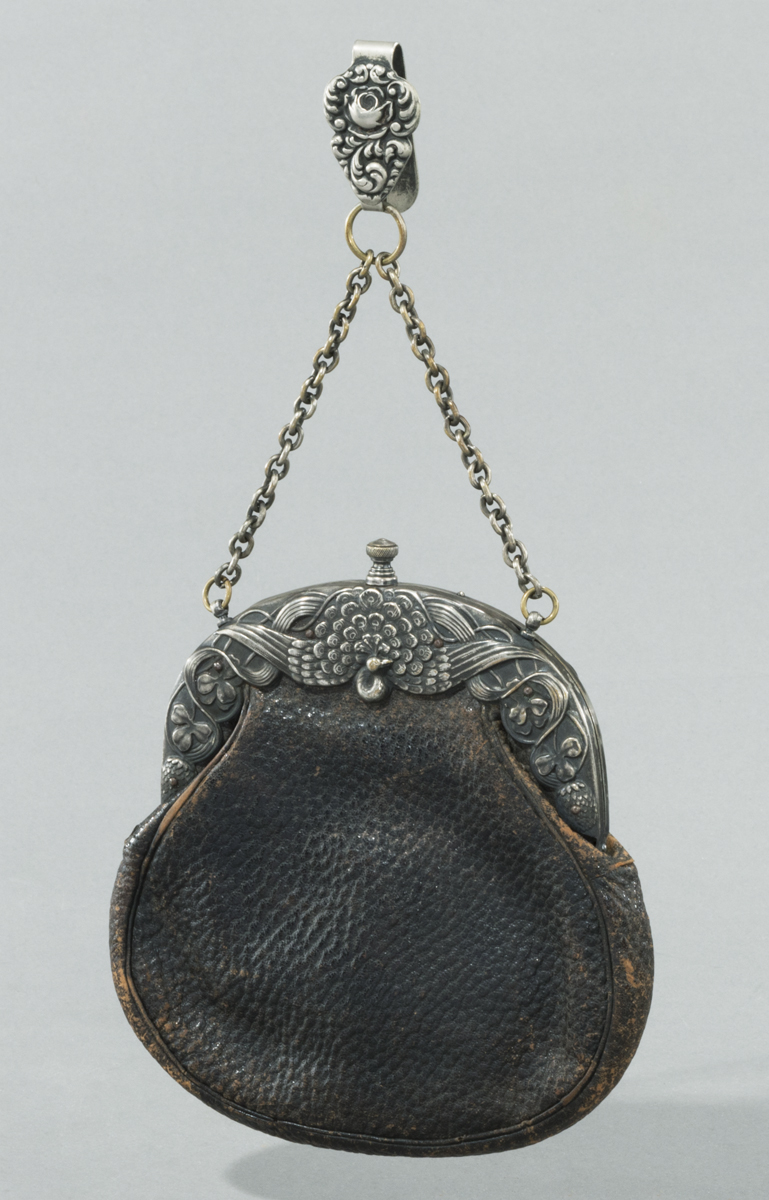 By the turn of the century, well-heeled consumers could choose from an array of luxury goods in the Art Nouveau style. This handbag features classic Art Nouveau motifs: botanical elements, curved lines, and a peacock, whose fanned tail feathers dominate the center of the design. In the first decade of the 20th century, the Art Nouveau style began to filter through many levels of American society. This Wilton rug is a good example, as it features characteristic elements of Art Nouveau design: striking color combinations, undulating "whiplash" lines, and stylized botanical motifs. The explosion of the electrical industry in the 1890s generated new design needs. Electrical corporations hired artists working in the style of the day—Art Nouveau—to design their buildings, products, and communications. These partnerships marked the beginnings of industrial design. 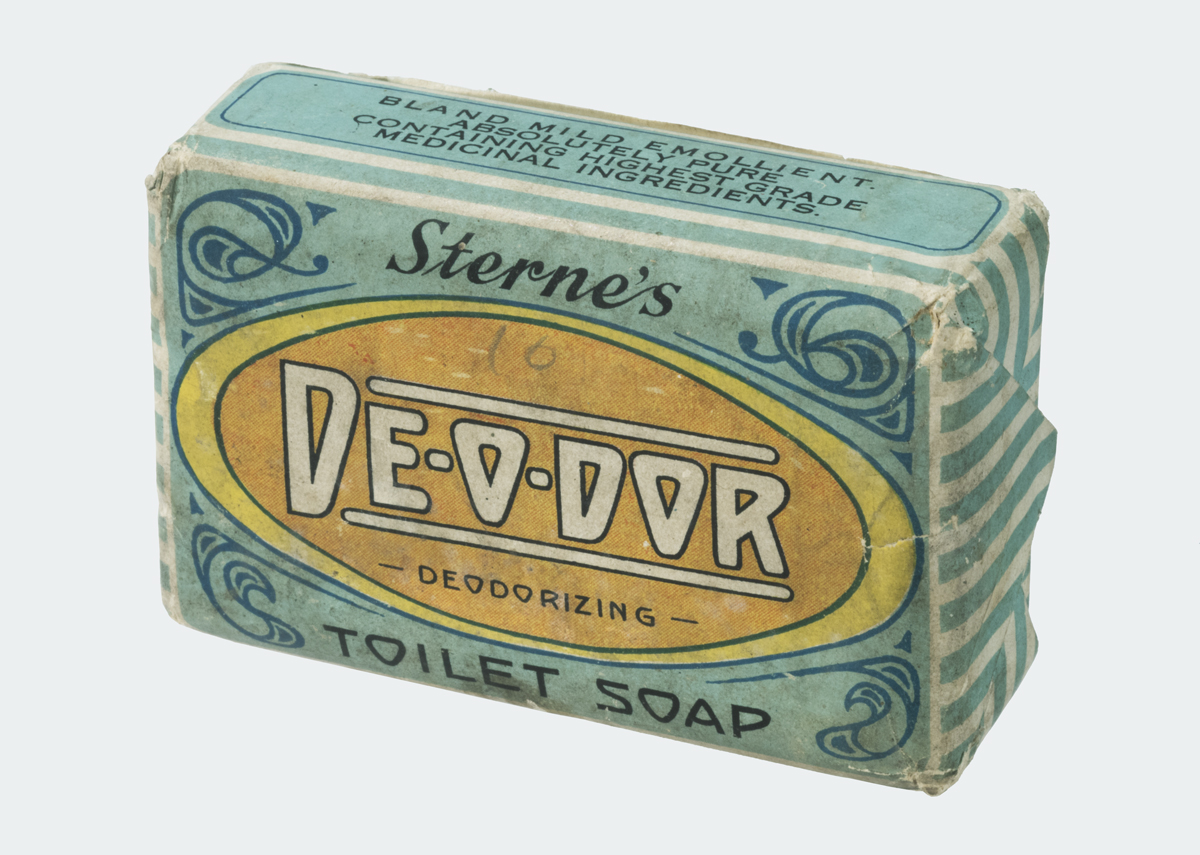 Art Nouveau reached its peak of popularity in 1900, but American manufacturers incorporated echoes of the style in products and product packaging into the 1910s. The Art Nouveau styling of the label for this everyday product—a bar of soap—would have appealed to many consumers.

By 1914, the Art Nouveau style was considered old-fashioned. Most European and American designers had moved on with their work. Tiffany was the rare exception. Tiffany Studios continued producing Art Nouveau–inspired lamps, vases, desk sets, and windows through the 1920s. Tiffany retired from day-to-day management in the early 1920s. It took until the Great Depression struck in 1929, and Tiffany’s death in 1933, for the firm to cease production.