The Arts and Crafts Movement was a reaction against ornate and what it considered “overwrought” decoration. Led by the British designer, philosopher, and social reformer William Morris (1838–1896), the movement sought to redirect public taste toward simpler esthetics. He also sought to reform industry and politics. Members of the movement used the term “arts and crafts” because they worked to reunify the fine arts (painting, sculpture, and architecture) with the crafts (such as metalwork, ceramics, and textiles) that had been demoted to second-class status with the coming of the Industrial Revolution.

Morris created the first interior design firm, Morris and Company, in London in the 1860s. His idea was to reform society through the home. The ideas of the Arts and Crafts Movement were widely disseminated, and its influence began to be felt in the United States by the 1880s and 1890s. By the turn of the 20th century, America had its own Arts and Crafts tastemaker, Gustav Stickley, who echoed many of the arguments put forth by William Morris. Stickley produced furniture and published an influential magazine called The Craftsman. 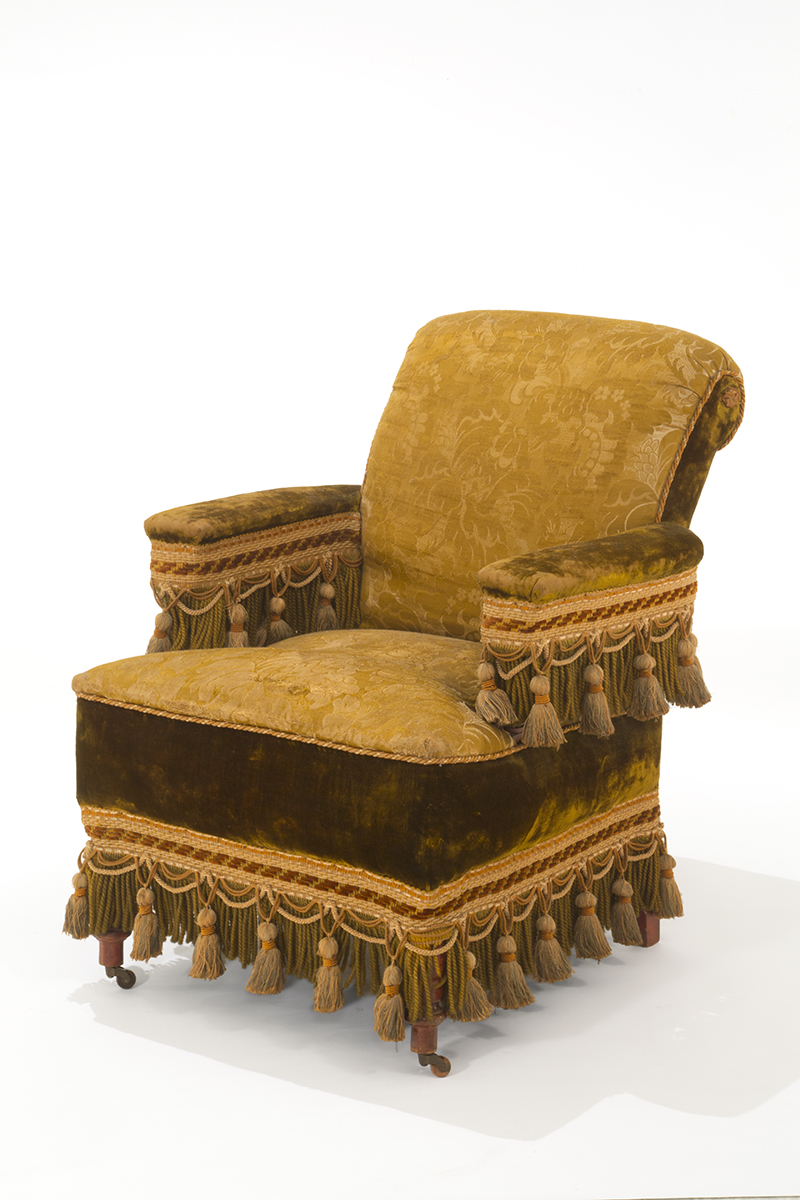 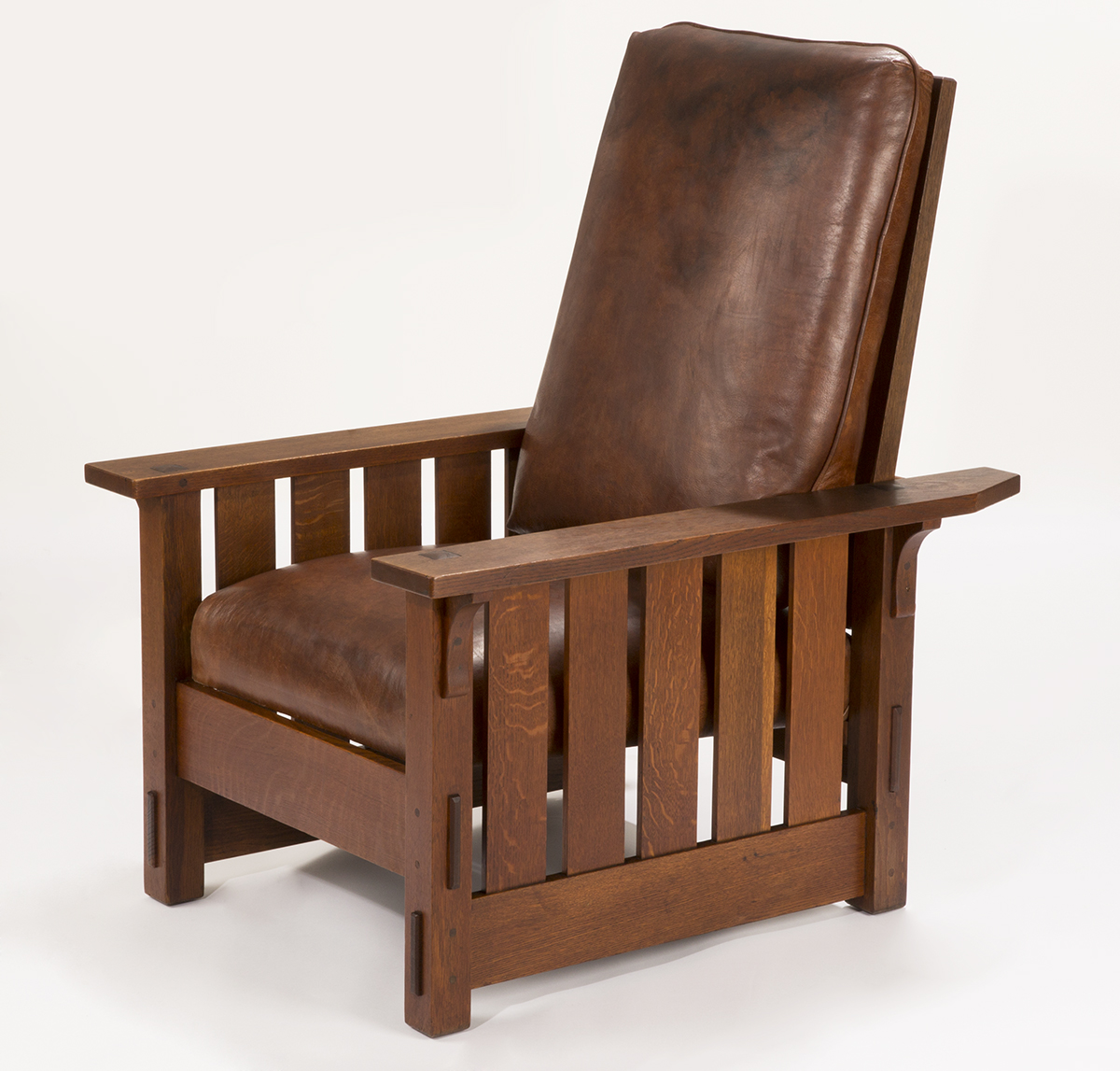 Comparing Stickley’s “Morris” armchair with a “Turkish” style late Victorian armchair clearly shows the distinction between the two. The Stickley chair is very rectilinear, with the solid oak structure exposed, where the “Turkish” style armchair is covered with lavish upholstery and highly decorative tassels and swags. Both are intended to be comfortable seating, but the Stickley chair has a mission—to reform taste. In fact, much American Arts and Crafts furniture is described as “Mission” furniture.

Grand Rapids, Michigan, began to emerge as a furniture-making center long before the Arts and Crafts Movement evolved in America. Beginning in the 1870s, and certainly by the 1880s, Grand Rapids became the center of furniture-making in America. There were an estimated 40 different companies producing furniture in the city by 1900. Two of the most interesting were the Stickley Brothers Company and the Charles Limbert Company. 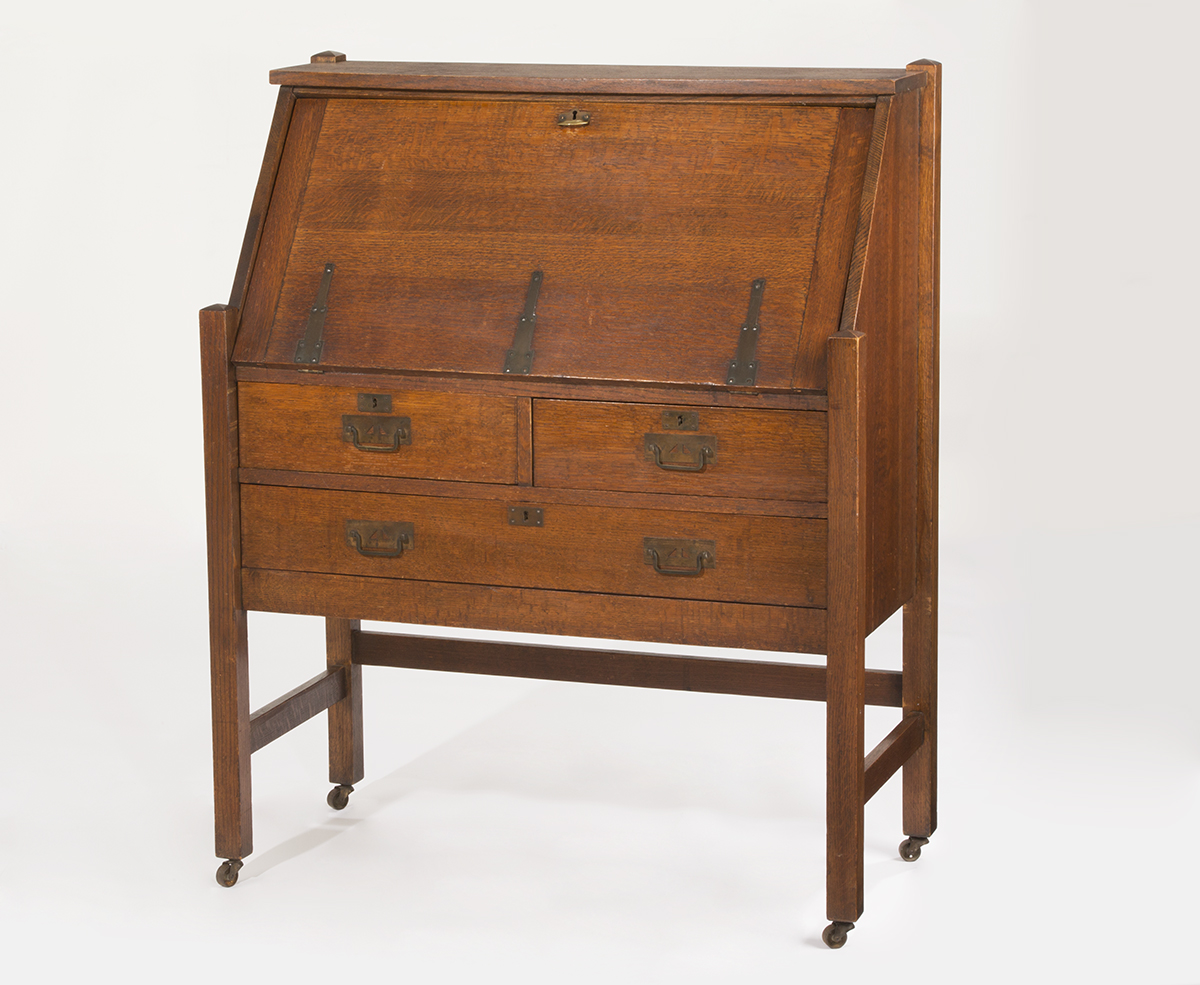 The Stickley Brothers Company, headquartered in Grand Rapids, was one of three Stickley family furniture firms. The others were headed by older brother Gustav, called “Craftsman Furniture,” and located in Eastwood, New York, now part of Syracuse. Gustav was the most famous of the Stickley brothers because of his Craftsman magazine. Two younger brothers formed the L. and J.G. (Leopold and John George) Stickley Furniture Company in Fayetteville, New York. This firm also produced important Arts and Crafts Furniture. Ironically, the Grand Rapids enterprise was the first chronologically, with Gustav, Leopold, and John George departing over time to create their own companies. 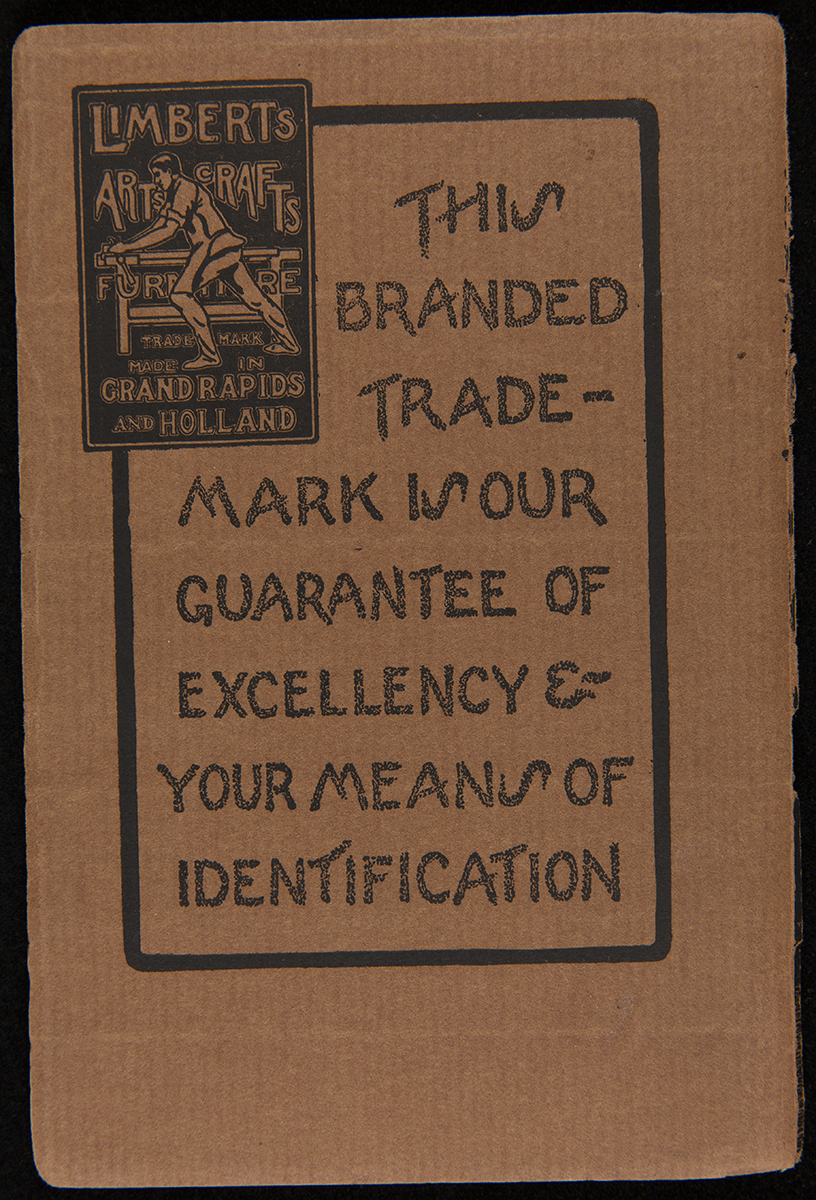 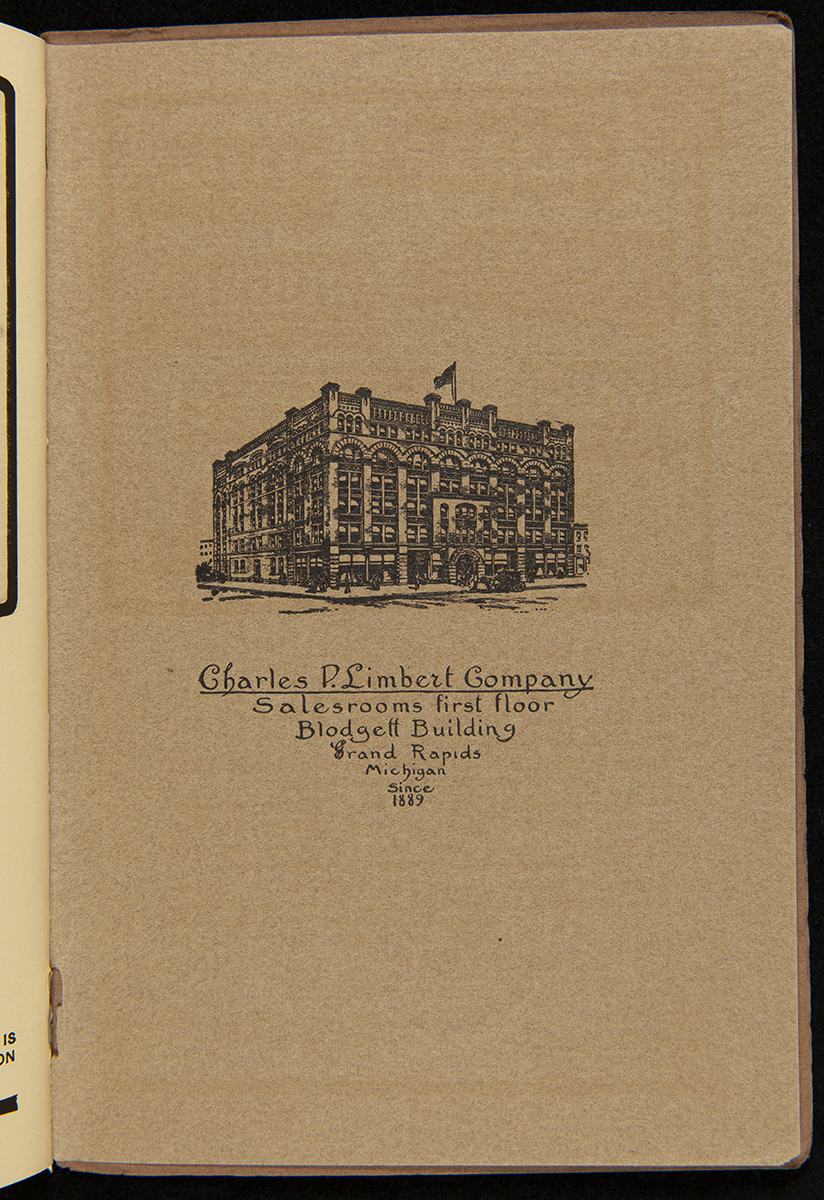 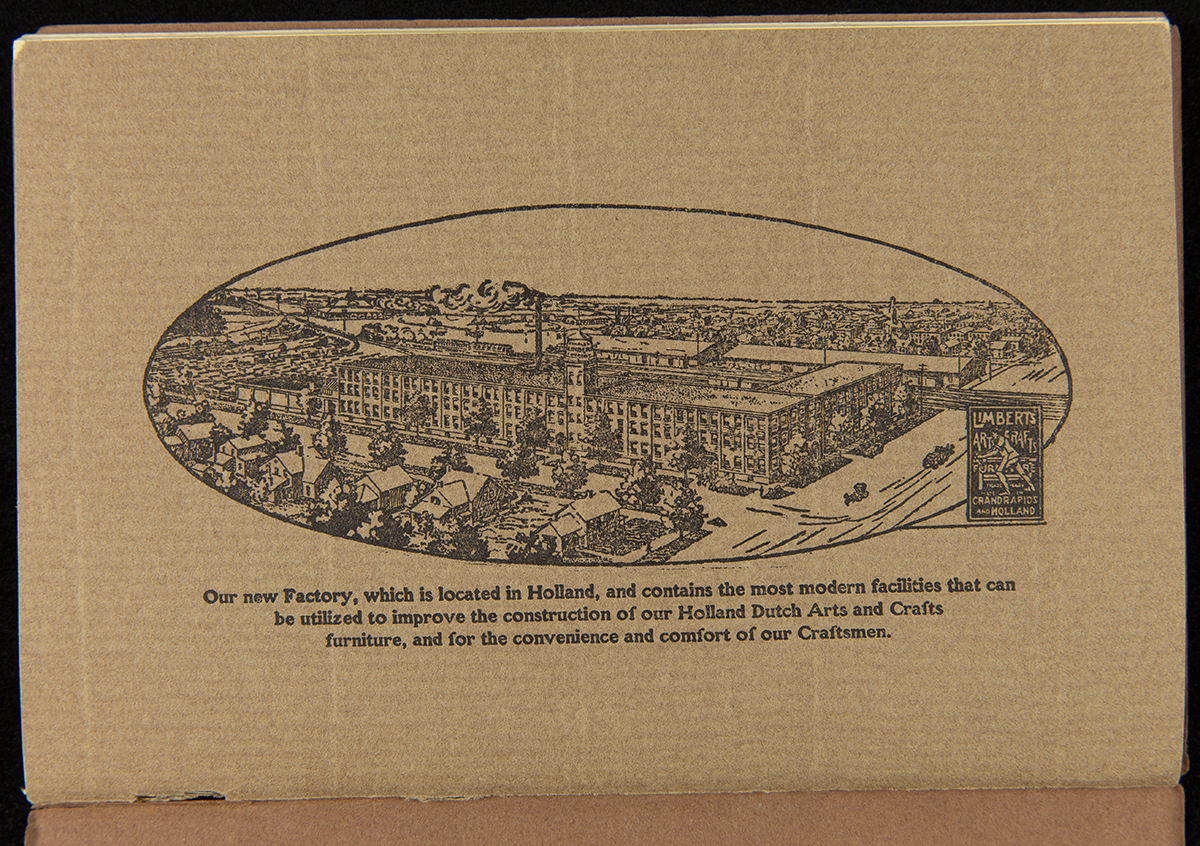 Charles Limbert’s company began in 1889 as a typical Victorian furniture maker. With the rise of the Stickley Brothers firm in the 1890s, Limbert began to hire designers knowledgeable in the most current trends in order to compete. From 1900 to 1910, Limbert became one of the most varied in production of any of the Arts and Crafts furniture makers. Their sales dramatically increased, and in 1910 they added a second factory in Holland, Michigan. The Henry Ford is fortunate to have a broad range of Limbert furniture in our collection, as well as a detailed trade catalogue dating to the height of the firm’s production, around 1910. 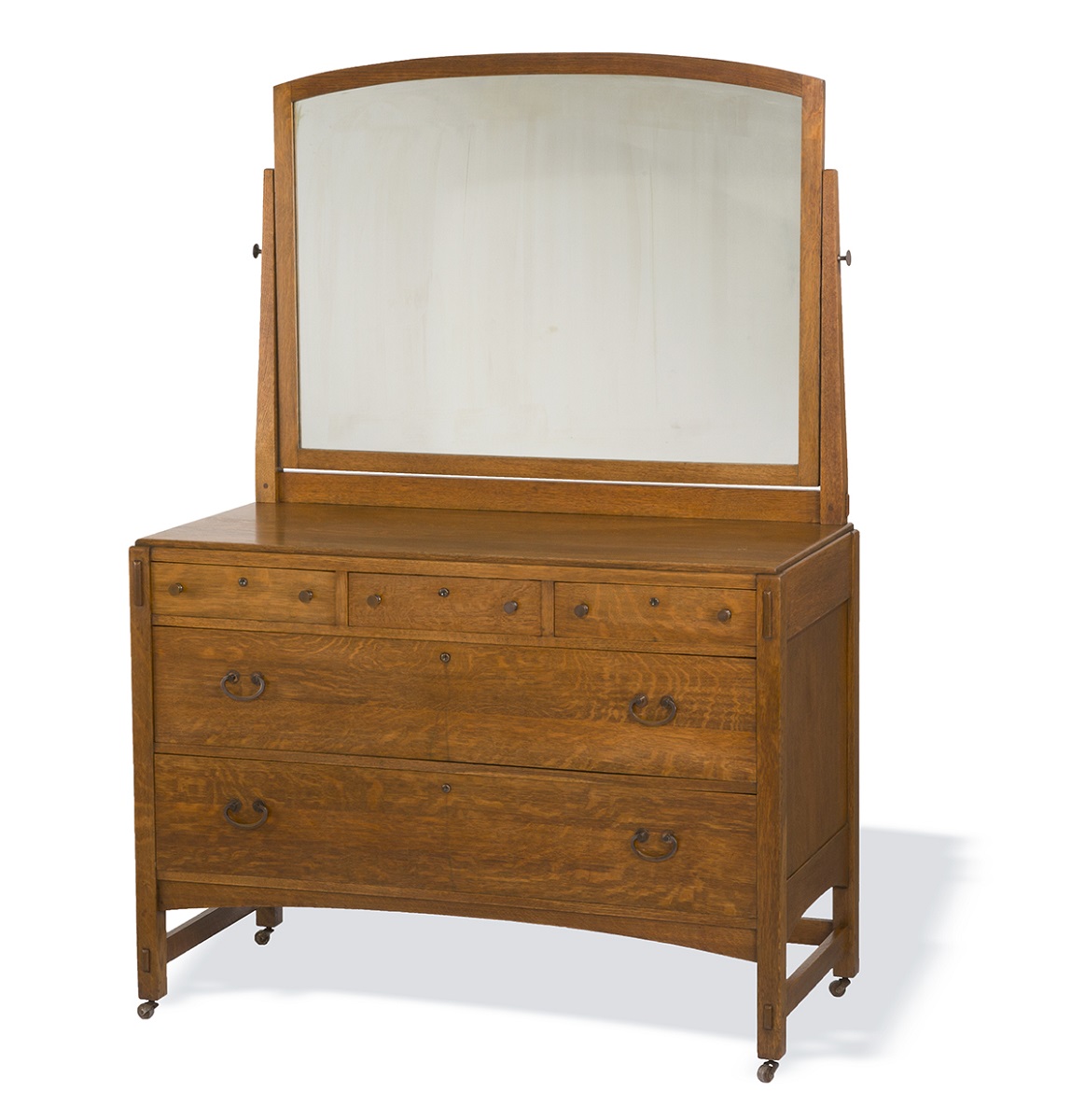 This dresser with mirror is typical of the standard types of Limbert’s production, a well-made and well-proportioned chest of drawers. It is typically Arts and Crafts, made of oak and expressing its method of construction via visible structural elements, like the stretchers or struts holding the legs together. 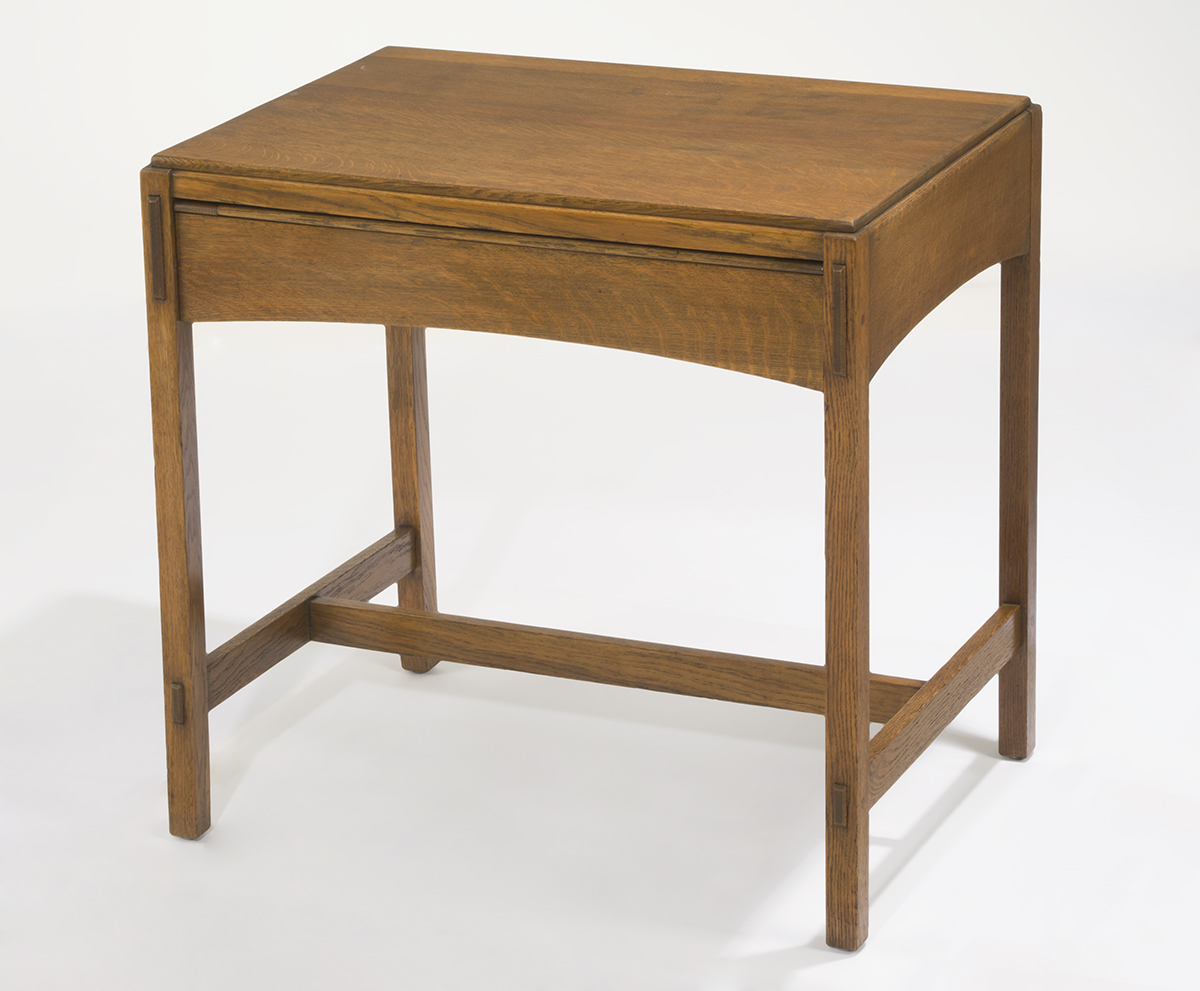 This library table, which could also be used in a parlor or living room, is a quintessential form in Arts and Crafts furniture making. Limbert, however, provides several unique features for how this table may be used. 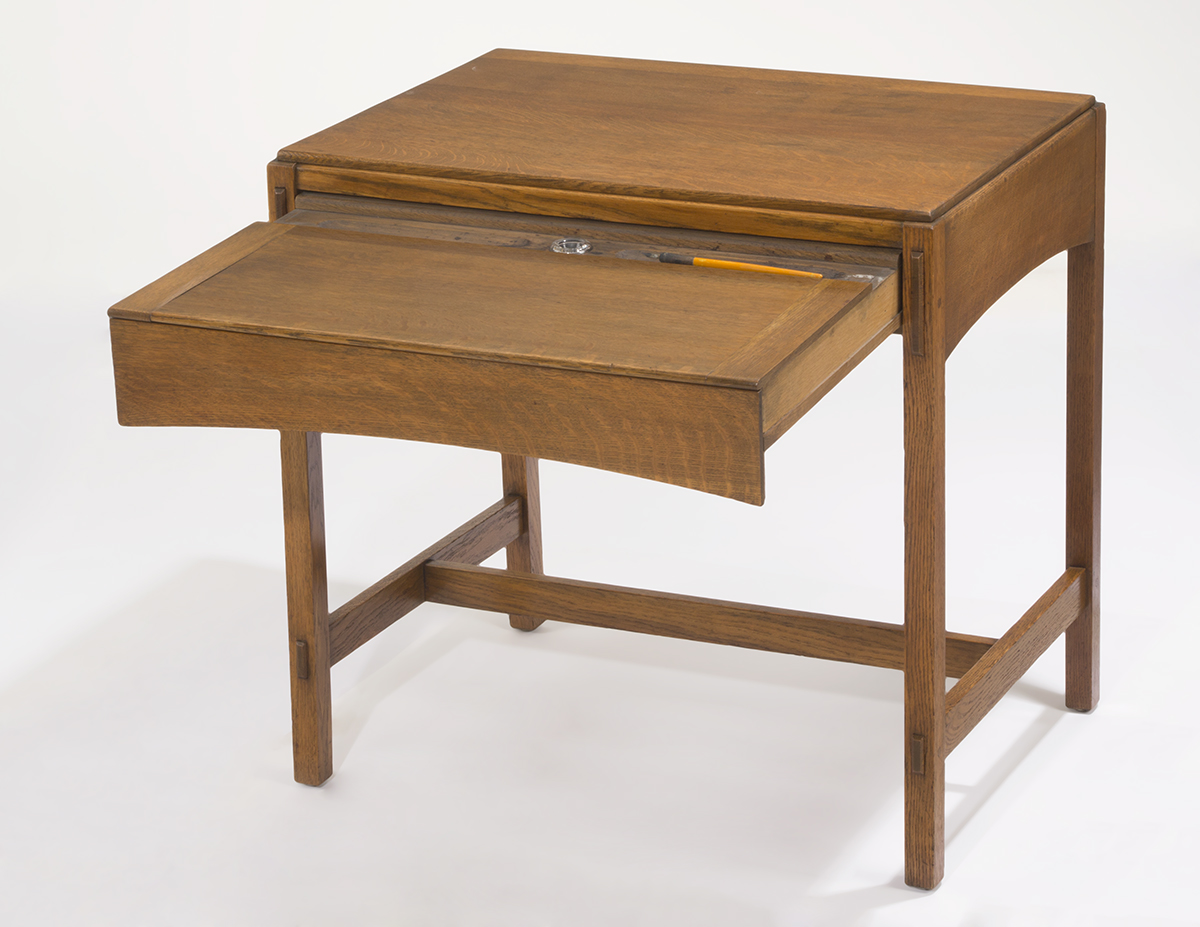 Where other furniture makers would place a drawer along the long side of the table, Limbert’s designers added an ingenious pull-out writing surface, transforming it into a desk. / THF159606 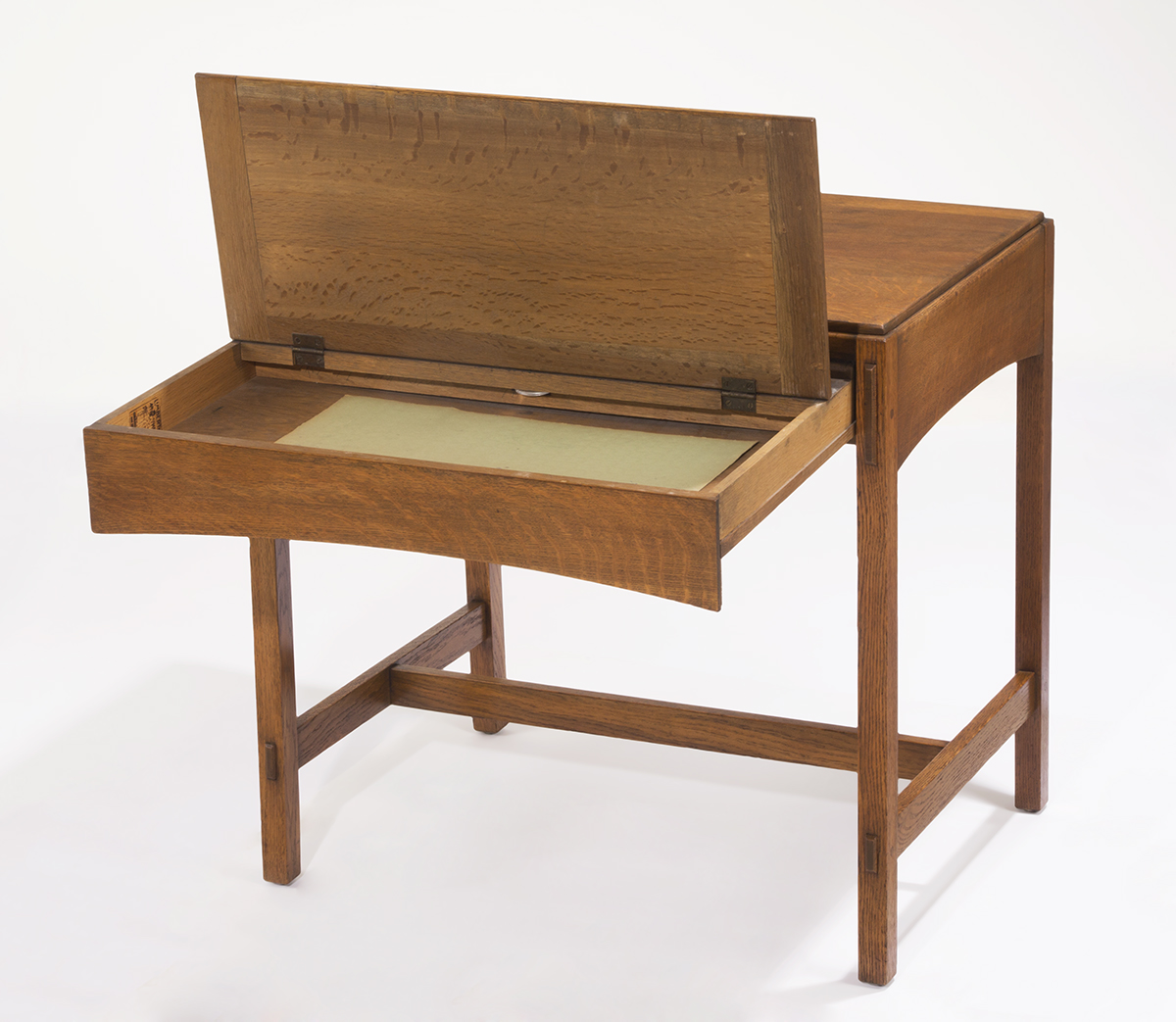 The designers also hinged the writing surface, allowing for storage space in what otherwise would have been a simple drawer. / THF159605 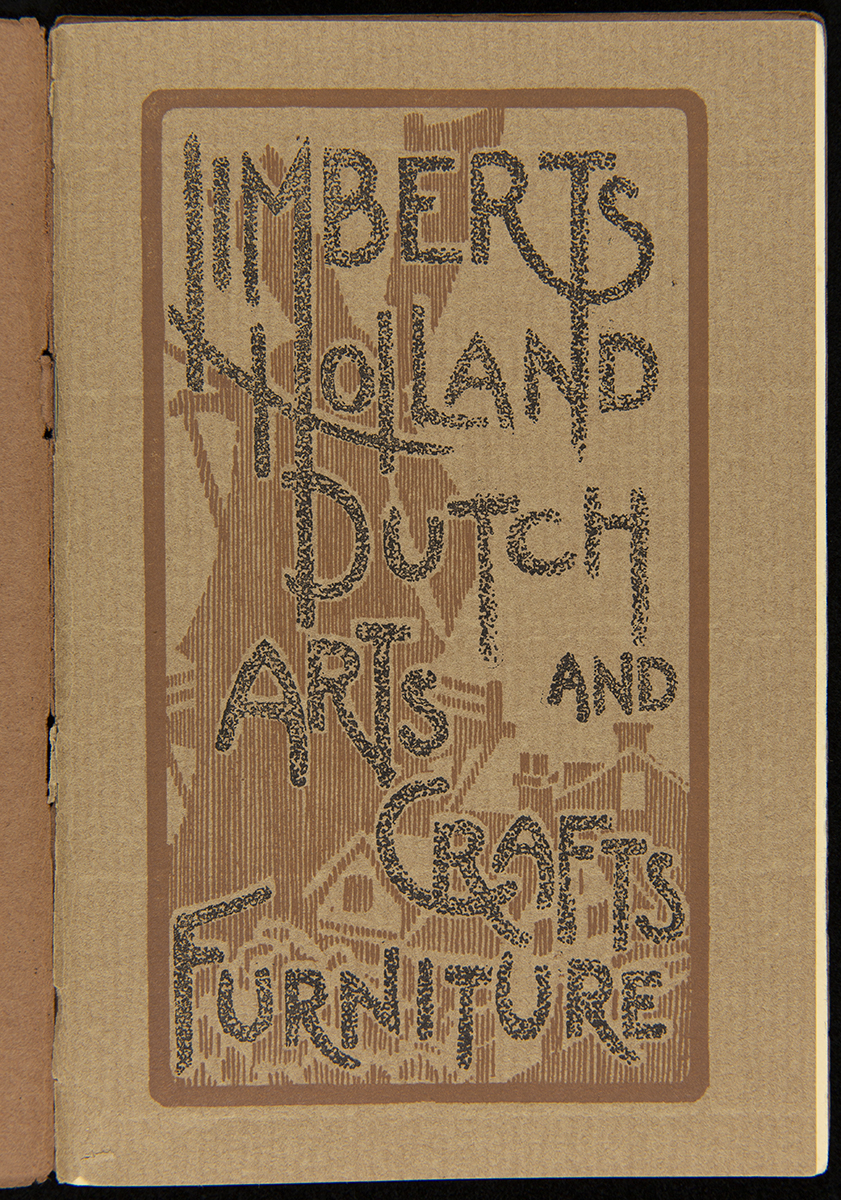 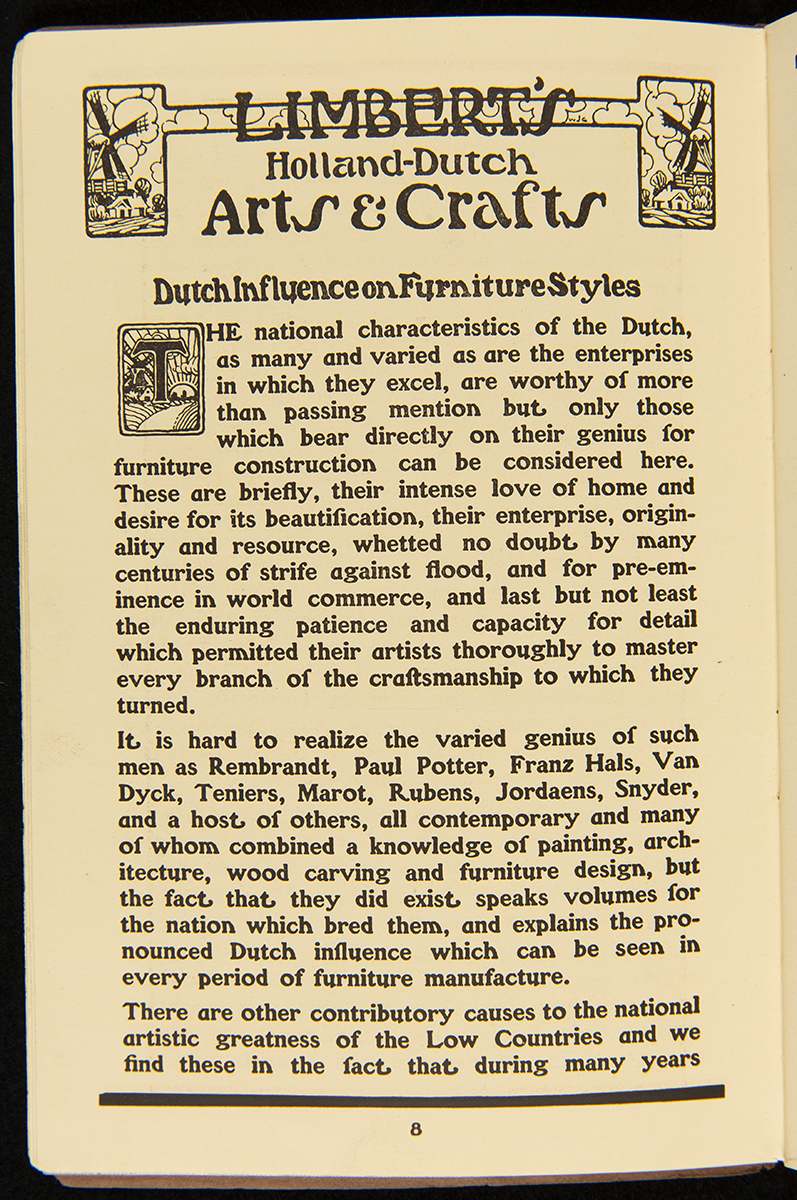 One of the interesting things about Limbert’s marketing strategy was their interest in linking themselves with the Dutch origins of many in western Michigan, as seen in these pages from their 1910 catalogue. 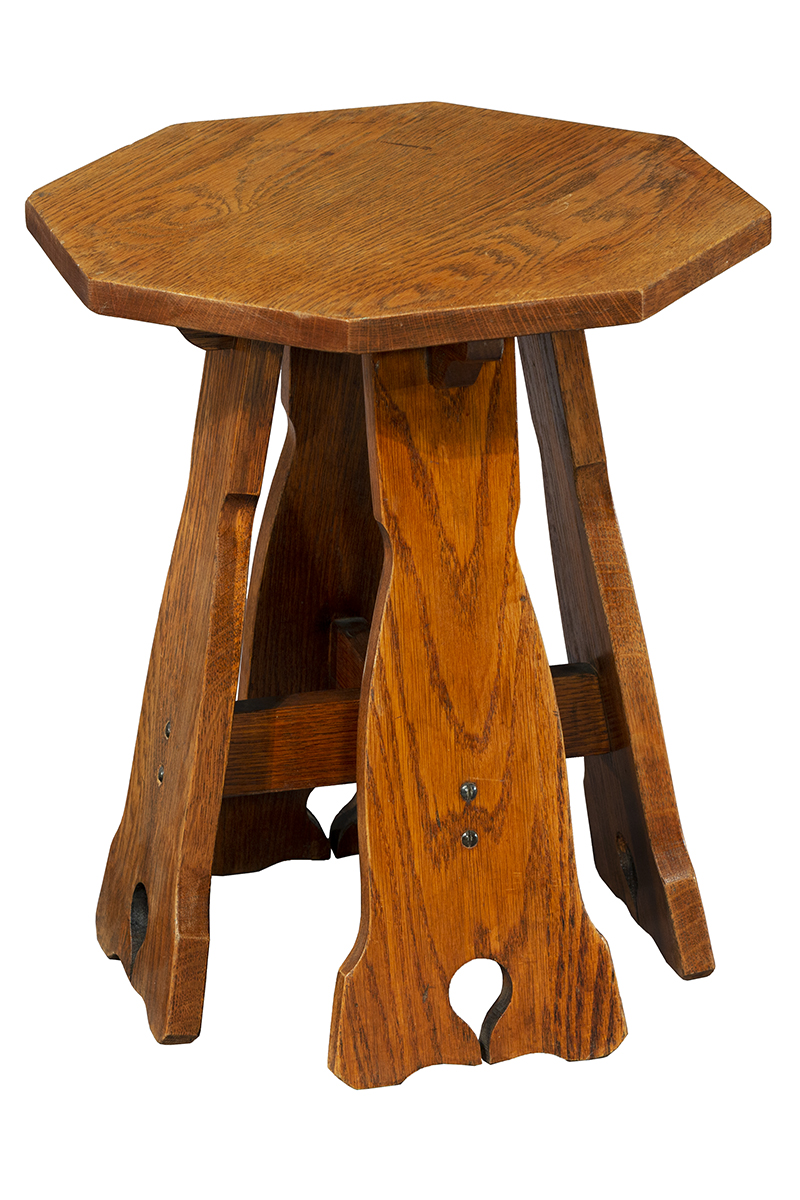 With the benefit of historical perspective, we can see that Limbert’s designers were looking at a variety of sources, some highly original. This small table, or tabouret, is an example of a design unique to the Limbert shop, as it lacks the angular forms typical in most Arts and Crafts furniture. 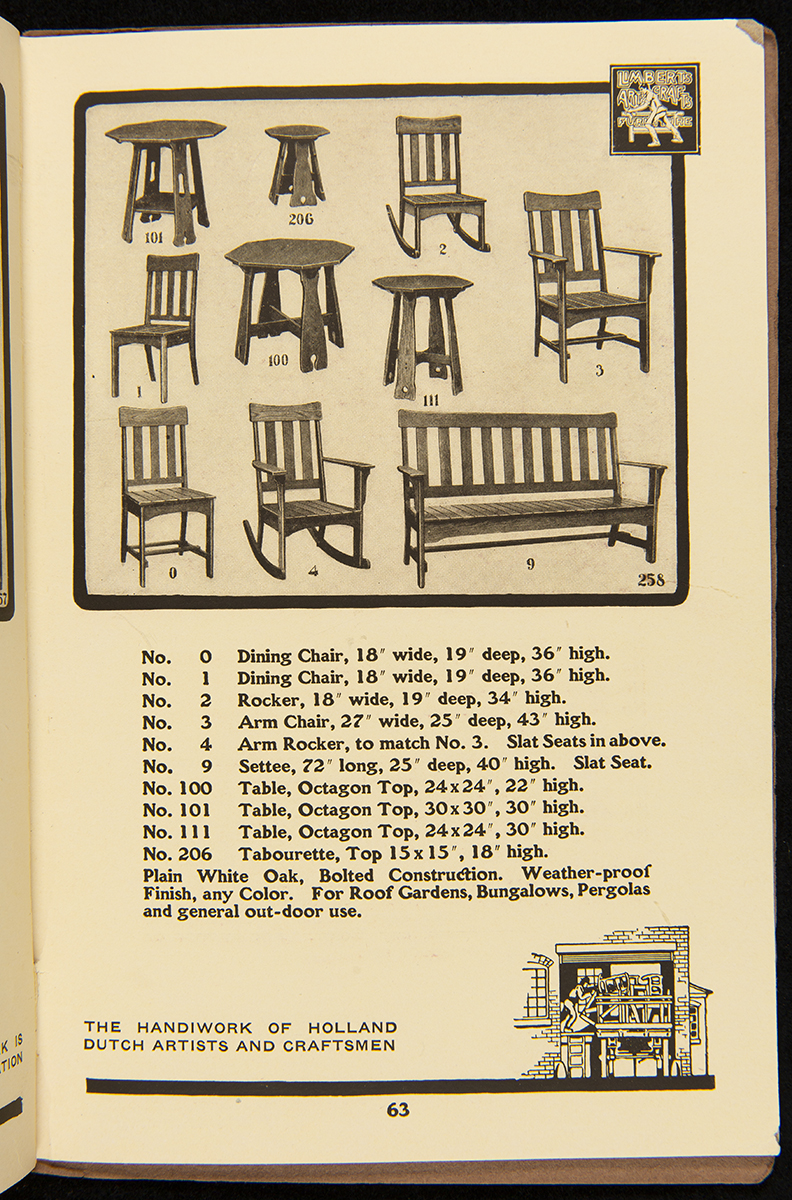 Looking at the catalogue, we can see that the tabouret was sold in a variety of sizes. 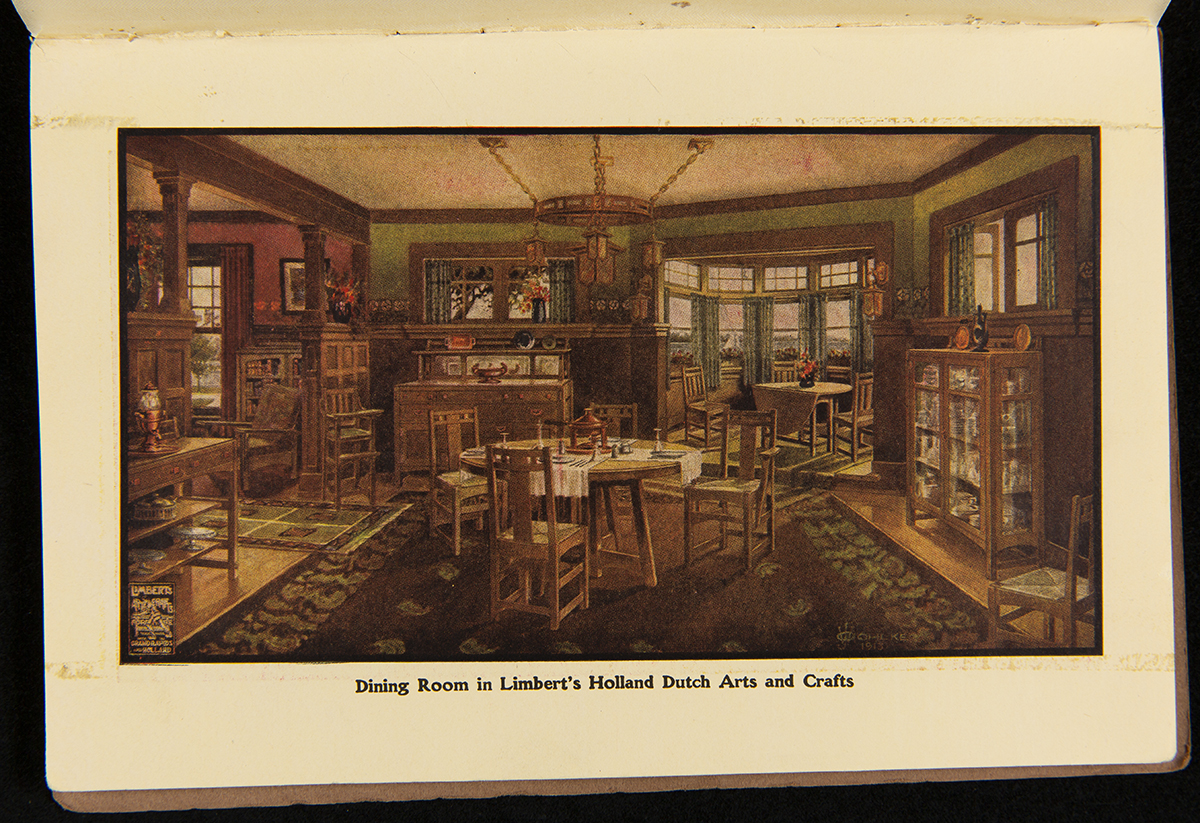 This elaborate illustration from the 1910 catalogue shows the ideal dining room with an adjacent breakfast nook. While many of the furnishings are standard Arts and Crafts designs that could have been made by many American makers, the unconvential dining room chairs are unique to Limbert. Specifically, the chair backs show a solid central splat vertical element and feature open squares along the top. This may derive from contemporary English or German sources, which were available to Limbert’s staff through design magazines. 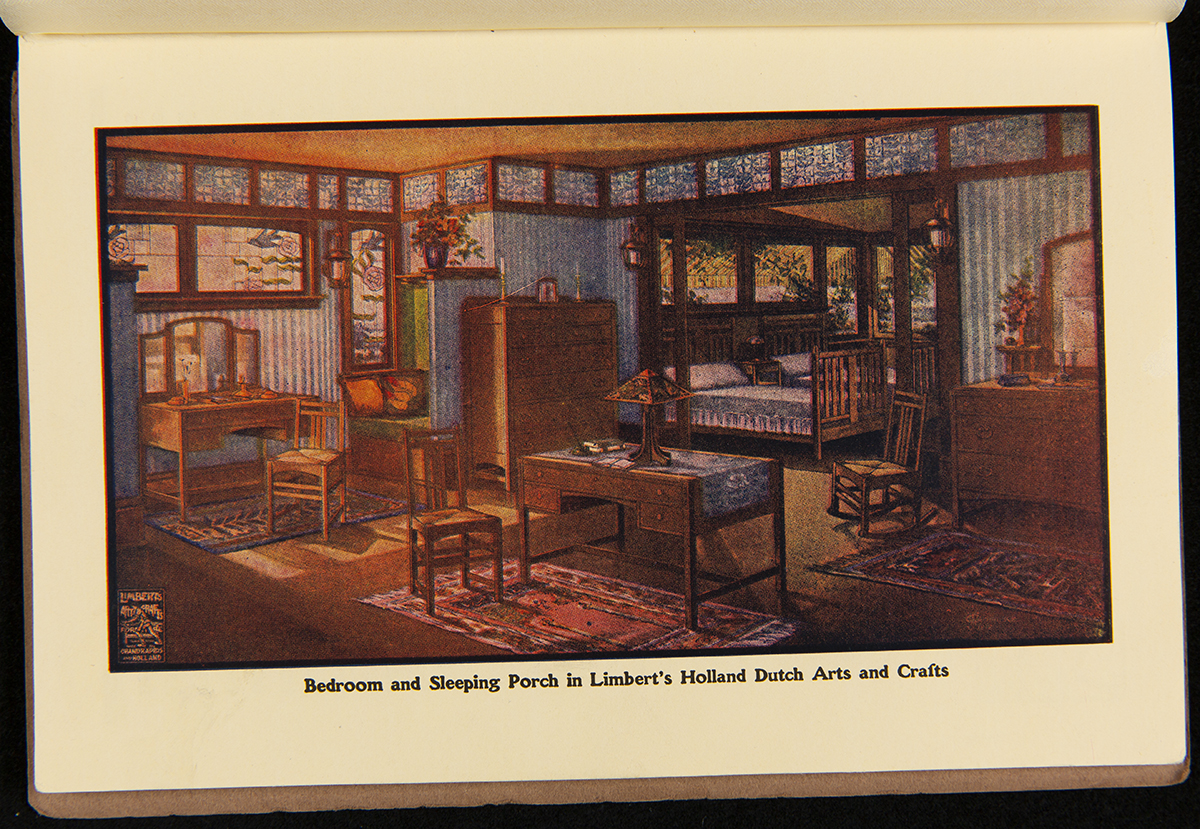 A bedroom with an adjacent sleeping porch was very popular in the era before air conditioning. It was considered healthy to sleep surrounded by fresh air when diseases like tuberculosis were common. The furniture is typical for Arts and Crafts, but the bright blue walls are a departure from the earth tones which were promoted by tastemakers like Gustav Stickley and Frank Lloyd Wright. 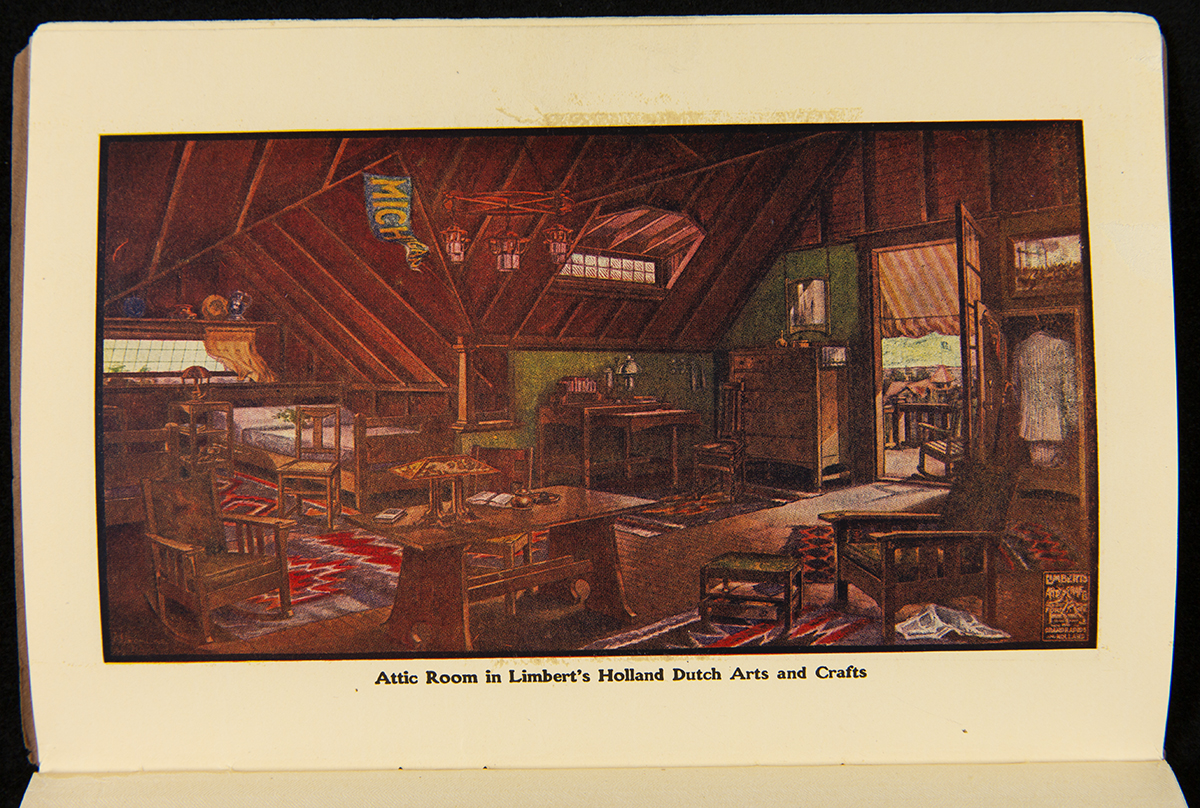 The room shown above was probably intended for an older child about ready to head off to college—note the Michigan pennant hanging above the bed. The use of an attic space as a bedroom was unusual. The library table mentioned earlier is pushed up against the back wall.

The Arts and Crafts period of the late 19th and early 20th centuries was one of the most inventive in the history of American decorative arts. Within that period, one of the most creative of American firms was the Charles Limbert Company, as these image and objects demonstrate. At The Henry Ford, we are fortunate to hold these collections and pleased to be able to share them.