Striker to the Line: An English Plate Depicting an American Sport 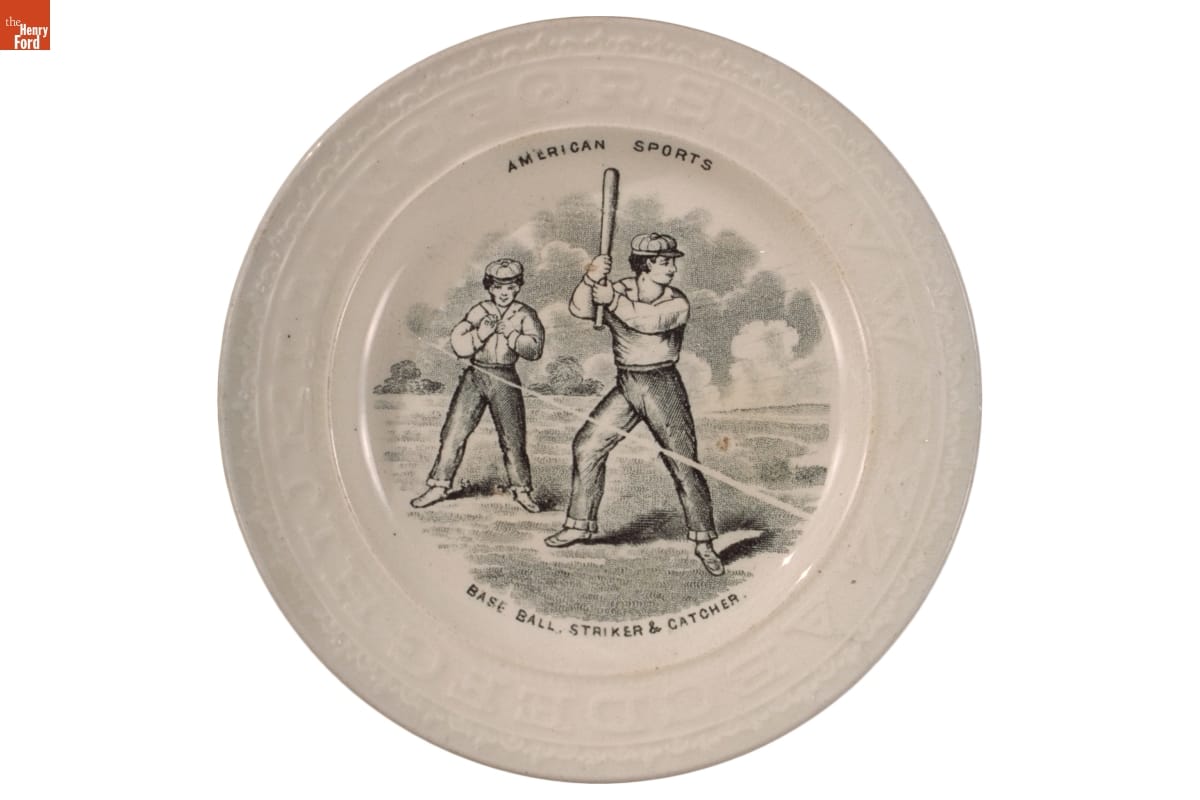 In the 1880s, many Michigan towns supported baseball teams, including Waterford, in Oakland County, but the game's history goes back further. The game of base ball (as it was often spelled into the 1890s) had its origins in a number of children's games, but especially a British game called "Rounders." Rounders rules called for the game to be played on a diamond, with a striker (batter) who faced a feeder (pitcher).

The American game of base ball gained in popularity in the mid-1800s, so much so that English ceramic makers produced dishes such as the "Base Ball" plate above, depicting a "Striker & Catcher," to appeal to American consumers. American interest in base ball in the late 1800s is evident in the production and marketing of such a plate.

Americans purchased these English-made ceramics to celebrate their national game, but base ball did not have all the regulations we know in modern baseball today. Until the 1880s, rules stated that the pitcher had to deliver the ball underhanded with a straight arm. The batter could call for a high or low pitch. A high pitch was considered one between the belt and shoulders, and a low pitch was to be delivered between the belt and knees, a range close to the modern strike zone. Balls and strikes were usually not called until the 1870s.

Some rules called for home plate to be made of marble or stone, but there was no batter's box, only a line that bisected the plate. Consequently, today's historic base ball umpires will frequently signal the start of a game by calling, "Striker to the line!" Early rules discouraged, and often forbade, players being paid.

You can browse artifacts related to both the early and more modern forms of baseball in our Digital Collections. Or, if you want to see vintage base ball firsthand, check out the schedule for the Greenfield Village Lah-De-Dahs, who borrowed the name of the old Waterford team. The Village nine suit up to play teams from Ohio and Michigan throughout the summer as a part of Historic Base Ball in Greenfield Village. Though the song "Take Me Out to the Ball Game" was not written until 1908, you might hear the band play it. If you wish, you can sing along and cheer on the base ball strikers for the Lah-De-Dahs.


This post was adapted from the July 2000 entry in our former Pic of the Month series.