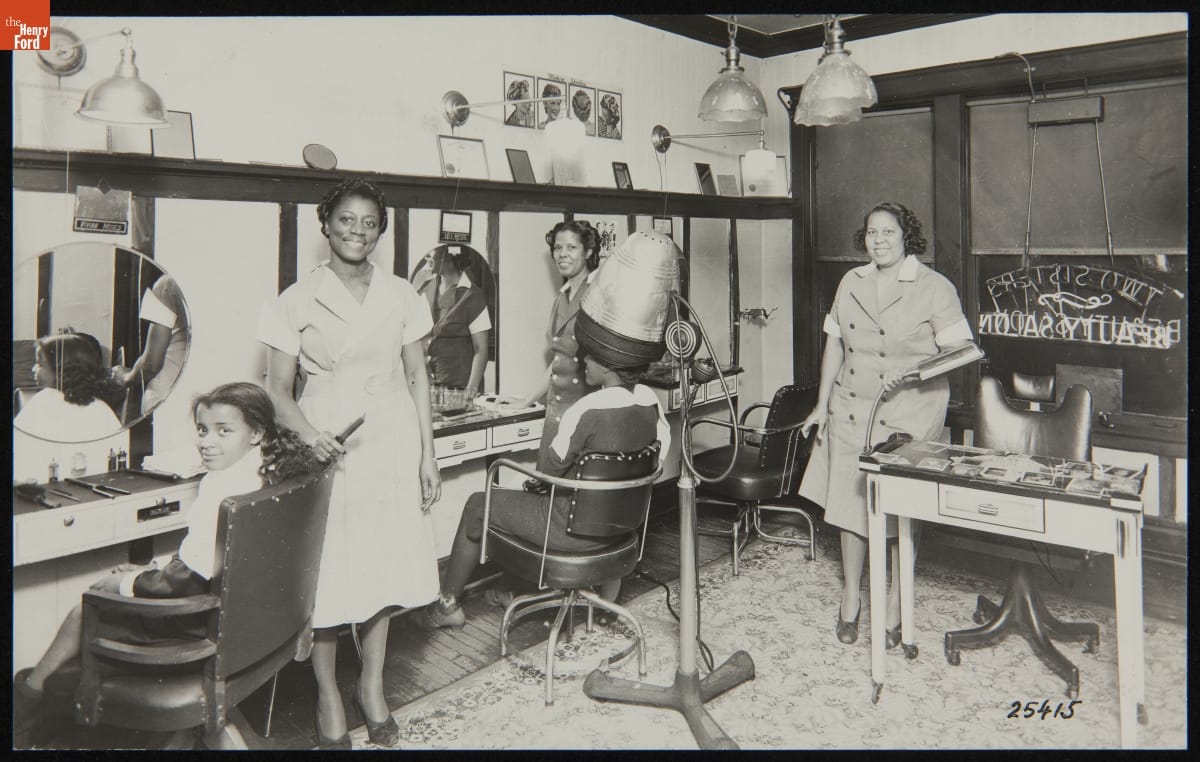 “Jim Crow” laws—first enacted in the 1880s by angry and resentful Southern whites against freed African Americans—separated blacks from whites in all aspects of daily life.  Favoring whites and repressing blacks, these became an institutionalized form of inequality. 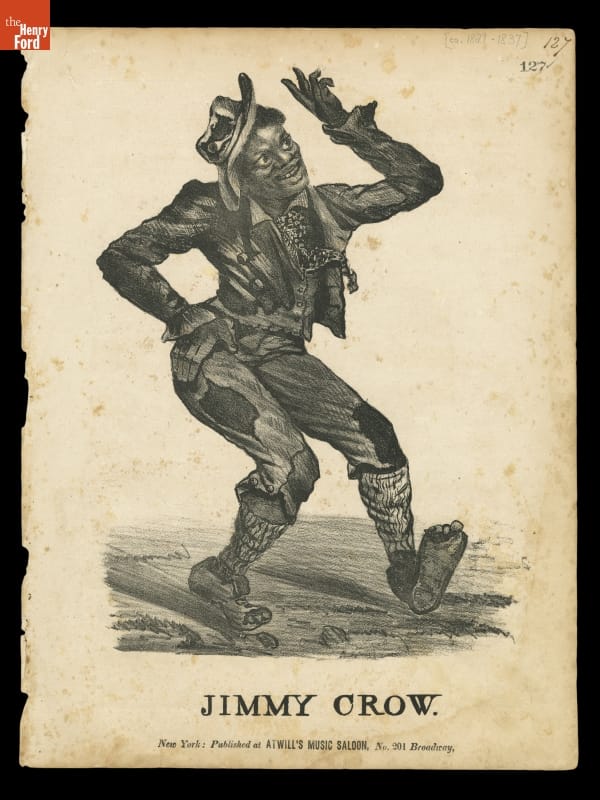 Jim Crow was a character first created for a minstrel-show act during the 1830s.  The act—featuring a white actor wearing black makeup—was meant to demean and make fun of African Americans.  Applied to the later set of laws and practices, the name had much the same effect. THF98689

In the Plessy v. Ferguson case of 1896, the U.S. Supreme Court ruled that states had the legal power to require segregation between blacks and whites.  Jim Crow laws spread across the South virtually anywhere that the two races might come in contact.  In the North and Midwest, segregation became equally entrenched through informal customs and practices.  Many of these laws and practices lasted into the 1960s, until outlawed by the 1964 Civil Rights Act. 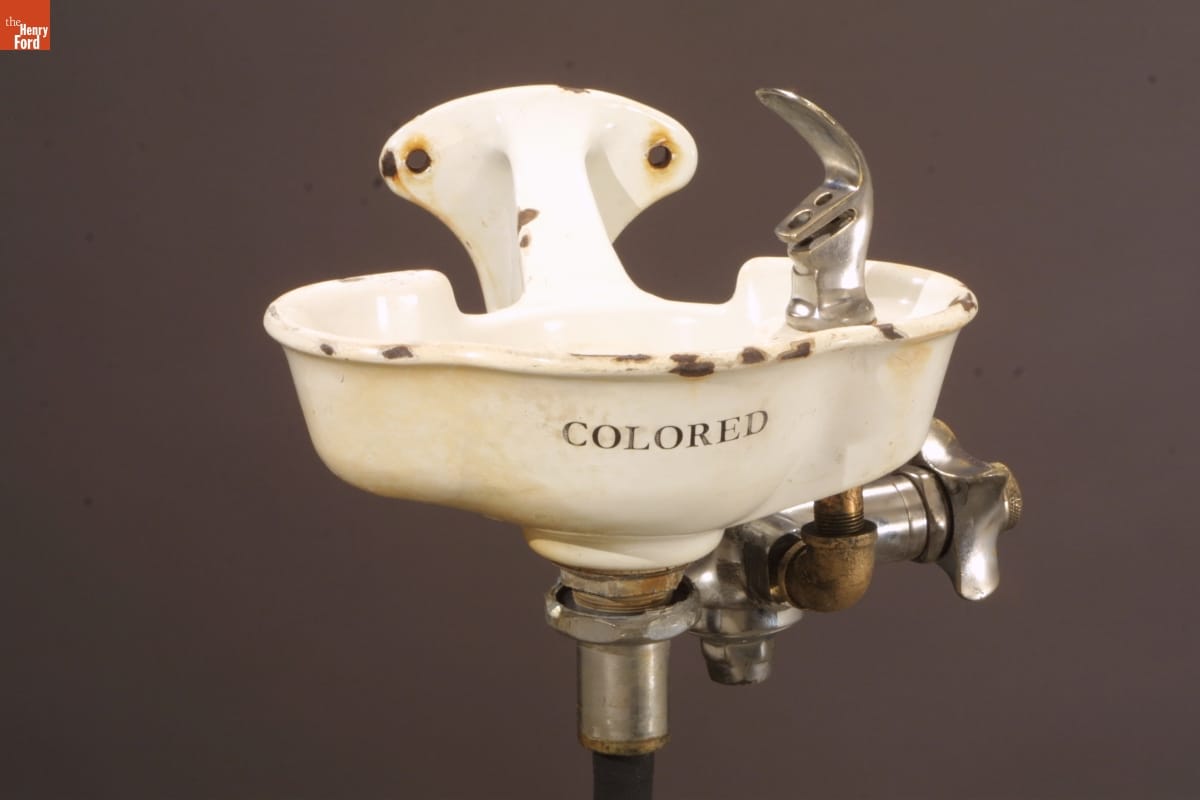 It took a great deal of courage, resilience, and strength of character for African Americans to maintain their self-respect and battle the daily humiliation of Jim Crow.  The black church, self-help organizations, and men’s and women’s clubs offered refuge, support, and protection, while the National Association for the Advancement of Colored People (NAACP) provided potential legal assistance. 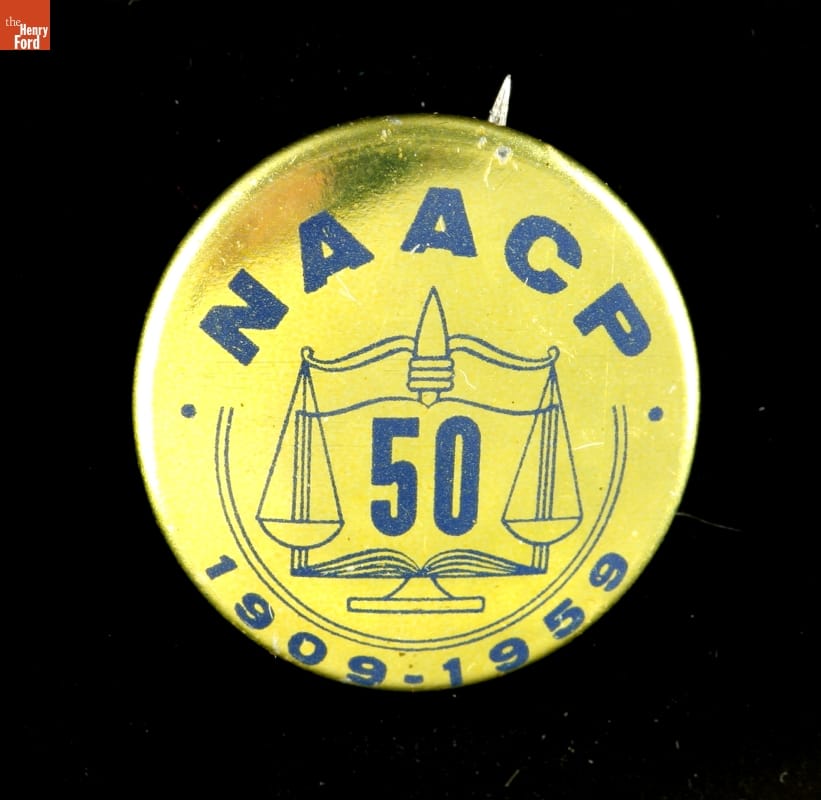 The NAACP, formed in 1909, emphasized fighting for racial equality through legal action rather than political protest or economic agitation. THF11647

Out of the demeaning environment of Jim Crow arose the opportunity for some African Americans to establish their own businesses.  The more cut off that black communities became from white communities and the more that white businessmen refused to cater to black customers, the more possible it became for enterprising black entrepreneurs to create viable businesses of their own.

Most of these businesses were local, small-scale, and family-run.  Many black entrepreneurs followed the tenets of Booker T. Washington, who had established the National Business League in 1900 to promote economic self-help.  Washington advocated economic development as the best path to racial advancement and the means to eventually challenging the racial prejudice of Jim Crow.  While Washington’s precepts would become increasingly out of step with the times, especially when the Civil Rights movement gained momentum, the support for his ideas among black entrepreneurs of the Jim Crow era is repeatedly evident in the naming of businesses after Washington.

The following images from the collections of The Henry Ford provide an intriguing window into the world of black enterprise and entrepreneurship during the Jim Crow era. 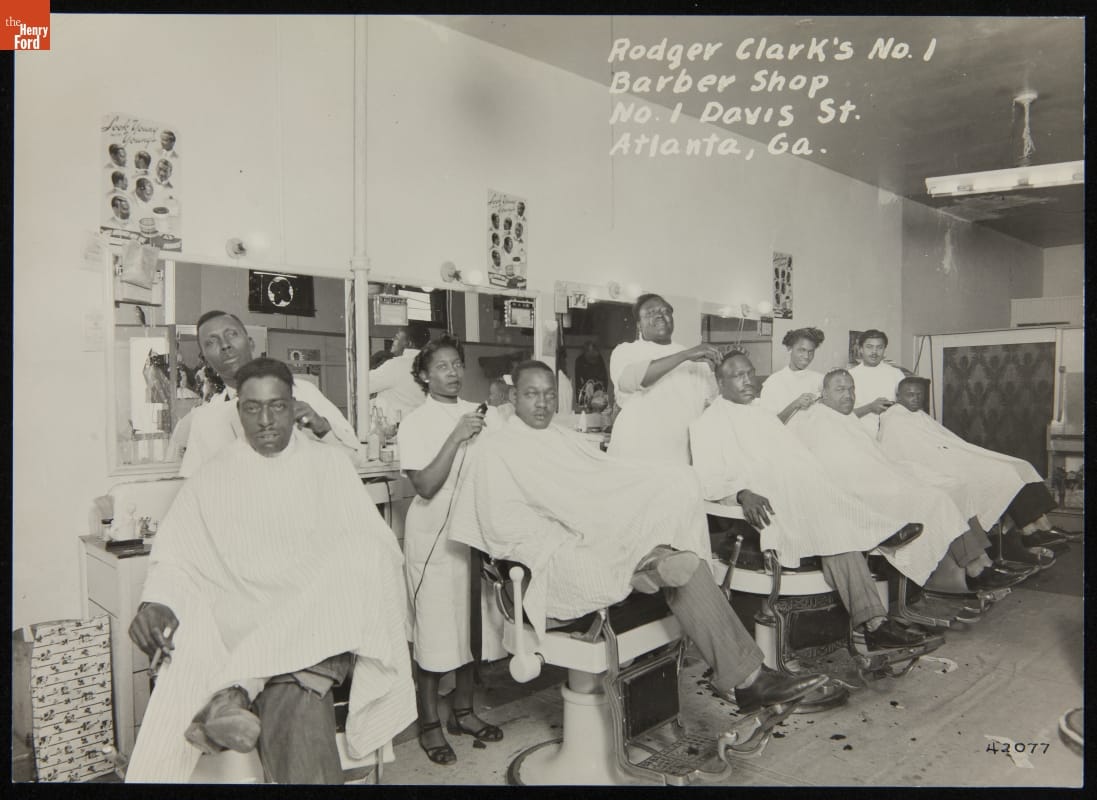 Black barbers had long cut white customers’ hair as part of their traditional second-class status in service to white people.  But, by the early 20th century, white patrons had begun to shift their business to white-owned shops.  A new generation of black barbers proudly established shops within their own communities, catering to a growing black consumer market.  They knew that their white counterparts would offer no competition, as they did not want the close contact with blacks that cutting hair demanded.  Nor could white barbers offer black men the kind of haircut and shave that they themselves knew how to give.

The cost to enter the field was low but black barbers’ status was high.  They generally attracted a regular customer base, akin to church preachers.  Men congregated and felt comfortable in these shops, and conversation flowed freely, both about local goings-on and larger racial matters that concerned them all.  Barber shops remained important spheres of influence during and after the Civil Rights era.

The rise of black female beauty culture paralleled larger trends in society, especially the influence of mass media like movies and popular magazines.  Several black female entrepreneurs spearheaded an emerging beauty culture industry—the most famous of these being Madam C. J. Walker.  Some enterprising black women, initially trained as agents to sell special hair preparation and cosmetic products (so-called “beauty systems”), eventually opened their own beauty shops as permanent spaces to facilitate their work as “beauty culturists.”  With the little capital needed to start their own businesses, they could free themselves from economic dependence on their husbands or on white employers.  It was respectable work, considered doing their part for racial progress and the economic uplift of the black race.

Beauty parlors became places where black women could indulge in moments of pampering, self-indulgence, and relaxation while also letting off steam, gossiping, and speaking their minds.  Increasingly, beauty parlors became vital public spaces that nurtured debate and activism among women within black communities. 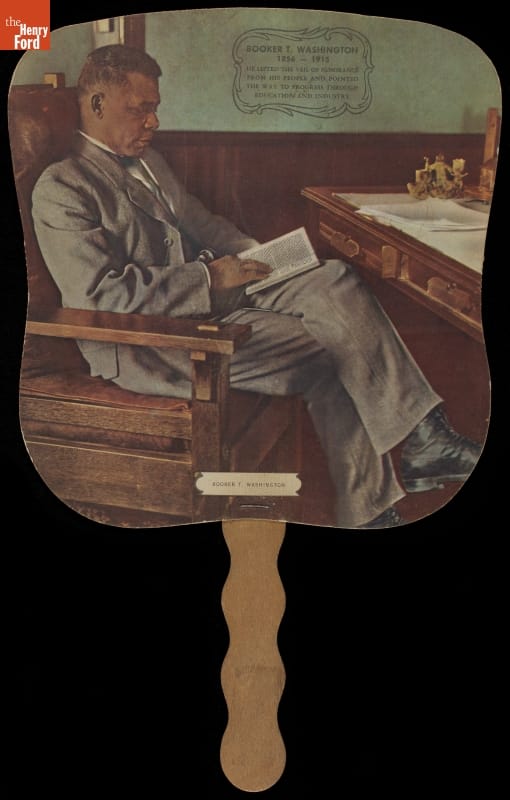 Booker T. Washington was depicted on the front of this cardboard handheld fan for the Jacob Brothers Funeral Home, Indianapolis, Indiana, circa 1955.  As advertised on the back, the funeral home promised air-conditioning and an organ in its chapels. THF224305

By the 1920s, funeral homes had emerged across the country as primary locations for carrying out the responsibilities of handling and burying the deceased.  These first emerged in large towns and cities and gradually spread to rural regions.  Funeral homes became a particularly lucrative avenue of entrepreneurship for blacks, which lacked white competition because of the close physical contact that was involved in this work.  When African Americans were excluded from joining the National Funeral Directors Association, they organized their own independent organization in 1925.

People entrusted black undertakers and funeral directors in their local communities with the proper and responsible treatment of their deceased loved ones.  These entrepreneurs offered an appropriate mixture of respect for traditional religious practices, modern American values, and the changing desires of local neighborhoods.  Some black funeral homes flourished through aggressive marketing and modern amenities like spacious limousines. 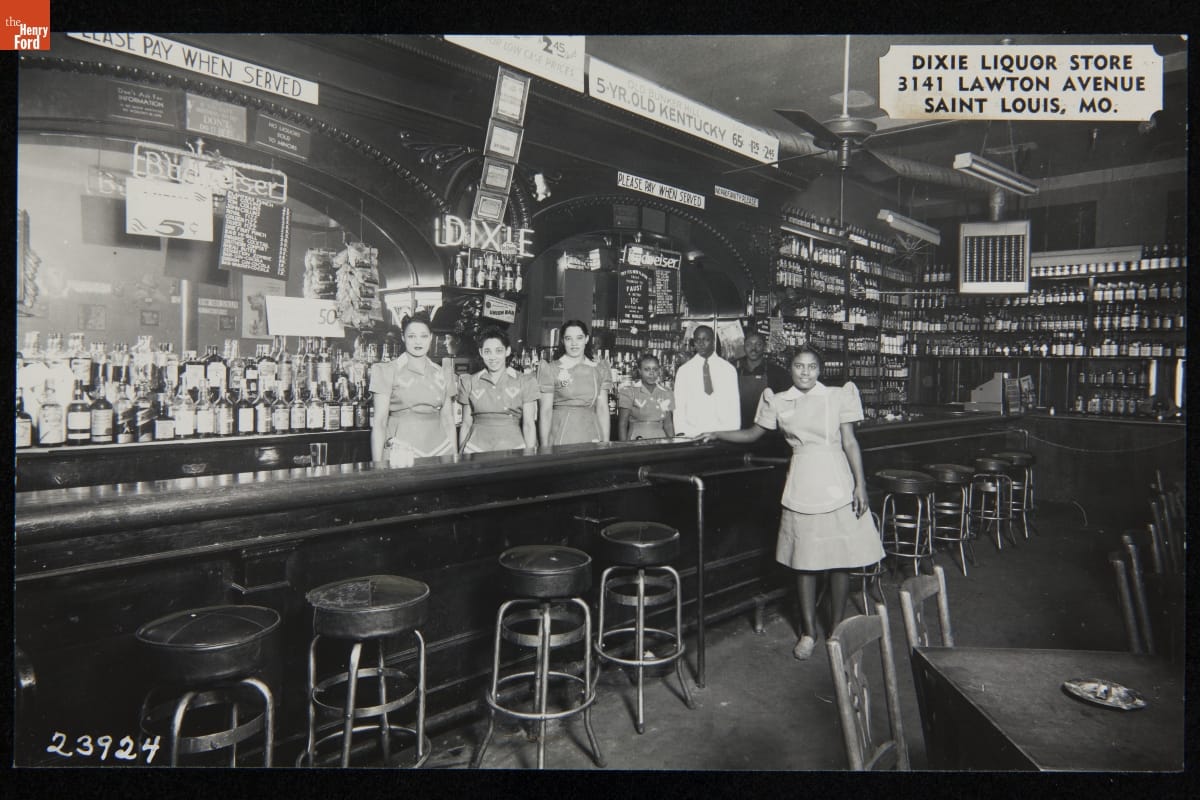 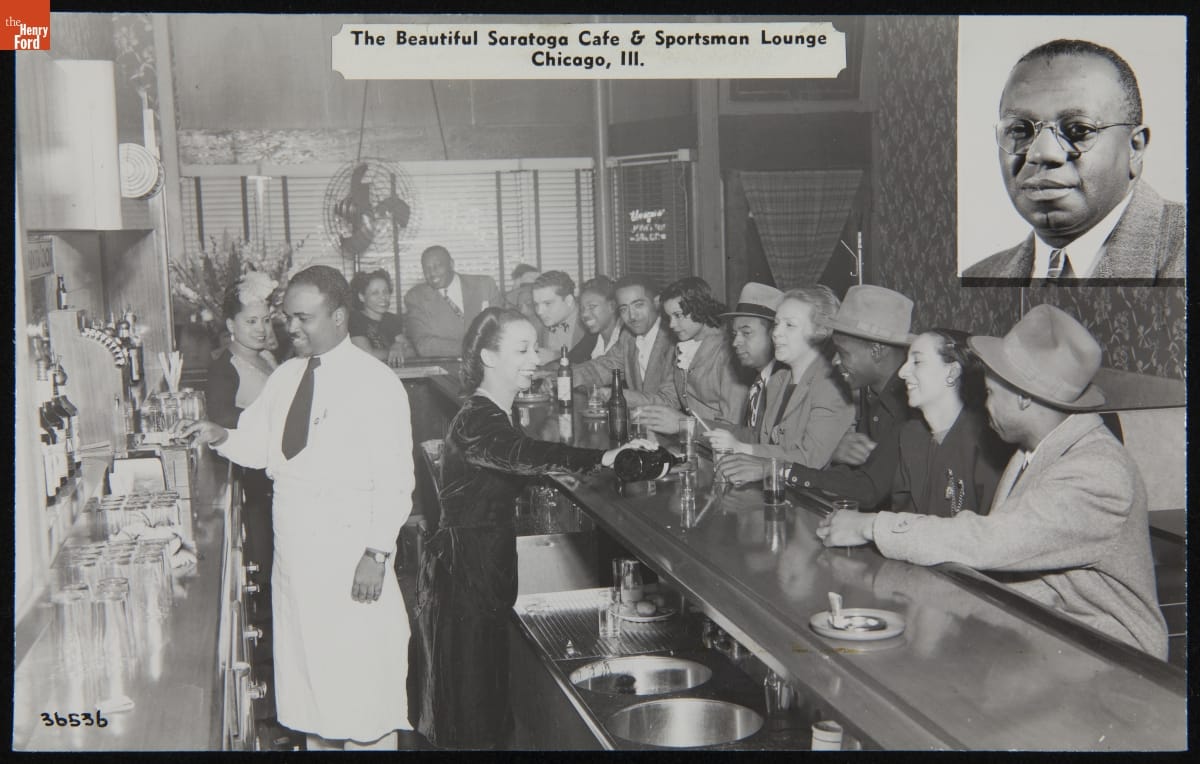 During the Jim Crow era, segregation may have been the law in the South but it was just as apparent in northern and midwestern cities.  Restaurants, cafés, taverns, and liquor stores thrived in black neighborhoods, established by local businessmen and geared to local customers.  These two stores—in St. Louis, Missouri and Chicago, Illinois—seem to have been extremely popular gathering places for both men and women. It was one thing to frequent the businesses in your own neighborhood.  But what happened when you took an out-of-town road trip?  Where might you and your family inadvertently encounter hostility, be turned away, perhaps even risk your lives?  Black postal worker Victor H. Green attempted to help black travelers combat this dilemma by creating The Negro Motorist Green Book.  From 1936 to 1966, the Green Book offered a directory of safe places for African-American travelers.  This included not only the expected roadside amenities of lodgings, service stations, and restaurants, but also listings of many of the classic businesses found in local neighborhoods—like barber shops, beauty parlors, liquor stores, and nightclubs.  [For more on the Green Book, see this blog post. One of the most difficult and risky aspects of cross-country travel for African Americans was the question of where to stay overnight.  The Negro Motorist Green Book attempted to update its listings as often as possible, while word of mouth helped African Americans learn of safe places—who often drove miles out of their way to get to them.  But the fact remained that the most extensive listings of hotels and motels were in northern metropolises with large populations of black Americans.  In smaller towns, a tourist home or two might be listed—which meant staying in a room in someone’s house.  Many towns lacked even a single listing.

In 1954, a new kind of black-owned lodging opened in Birmingham, Alabama, coinciding with a black Baptist convention in town.  Billed “The Nation’s Newest and Finest Motel,” it was built, owned, and run by pioneering black entrepreneur Arthur George (A. G.) Gaston.  Gaston also established several other businesses in Birmingham, including a bank, radio stations, the Booker T. Washington Insurance Company, a funeral home, and a construction firm.

Modeled after the groundbreaking Holiday Inns that had recently opened in Memphis, Tennessee, the A. G. Gaston Motel included 32 rooms, each with their own air-conditioning and telephone.  Gaston remarked that opening this motel “means that many persons passing through our city will have a fine place to stay.”  In 1963, the Gaston Motel became the epicenter of Birmingham’s Civil Rights protests and demonstrations. This Smokey Robinson and the Miracles 45 rpm record was licensed to and issued nationally by Chess Records because Motown as yet lacked a national distribution network. THF170558

Berry Gordy Jr., founder of Motown Records in Detroit, Michigan, in 1959, created a business that successfully bridged the Jim Crow era and the post-Civil Rights Act era.  He accomplished this by accurately predicting the coming of an integrated market of consumers for black popular music.

In 1922, Gordy’s father, Berry Sr., moved his family to Detroit from Georgia—an area steeped in Jim Crow laws and practices—because he faced hostility and potential violence from local whites when his food distribution business proved too successful.  Berry Sr. established the Booker T. Washington Grocery Store in the black working-class neighborhood of Detroit, which soon also became highly successful.  All the while, he encouraged his children to be industrious and establish their own business ventures.

Inspired by the legendary boxer Joe Louis, Berry Jr. first dreamed of becoming a famous boxer but he eventually gravitated to his other interest—music.  From record store owner to songwriter to multi-million-dollar record producer and distributor, Gordy used his business savvy to redefine black music coming out of Detroit as popular music that both blacks and whites would want to hear and buy.  Throughout the monumental success of his career, Gordy claimed that he had continually upheld his family’s business ethic and the self-help ideals of Booker T. Washington.

The Jim Crow Era provided the impetus for a number of black businesses to grow and flourish, instilling a sense of pride within black communities, serving as symbols of racial progress, and promising safe places to do business and socialize.  The conversation and ideas that flowed freely in black business establishments also helped raise consciousness and establish a sense of solidarity within black neighborhoods.  When the Civil Rights movement gained momentum—offering an end to the indignities and disenfranchisement of Jim Crow—many black entrepreneurs did what they could to support the movement.  After the Civil Rights Act passed in 1964, and segregation was declared illegal, black entrepreneurs could take pride in the role they had played in the Civil Rights movement despite the fact that the future viability of their segregated businesses were now in jeopardy.

To read more on these topics, check out these helpful books: