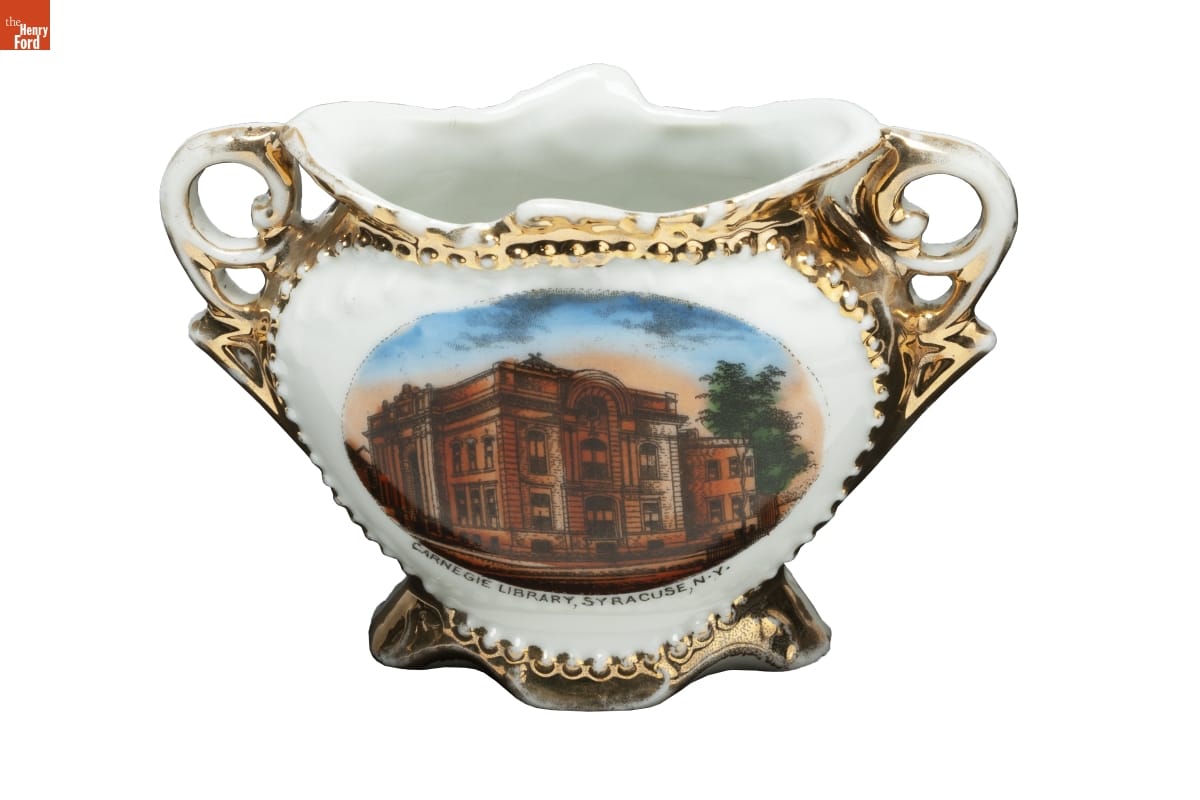 The Carnegie library depicted on this ceramic vase was built in Syracuse, New York, in 1905, with a $200,000 grant from Andrew Carnegie. Designed by Syracuse architect James Randall, it still boasts its original spacious marble vestibule and grand curved marble staircase. / THF192213

When I was growing up, I loved to visit the library. My local library, in a repurposed 1920s-era mansion in an eastside suburb of Cleveland, Ohio, was a magical place — complete with niches, mysterious cupboards and a grand staircase. I had no familiarity with Carnegie libraries until the 1980s when, as a young museum curator, I visited the Port Huron (MI) Museum of Arts and History to consult on a log cabin located on the museum’s grounds. When the director showed me around the main museum, he proudly told me that it had once been a Carnegie library. The interior space was delightfully laid out in a rotunda shape with staircases and balconies. 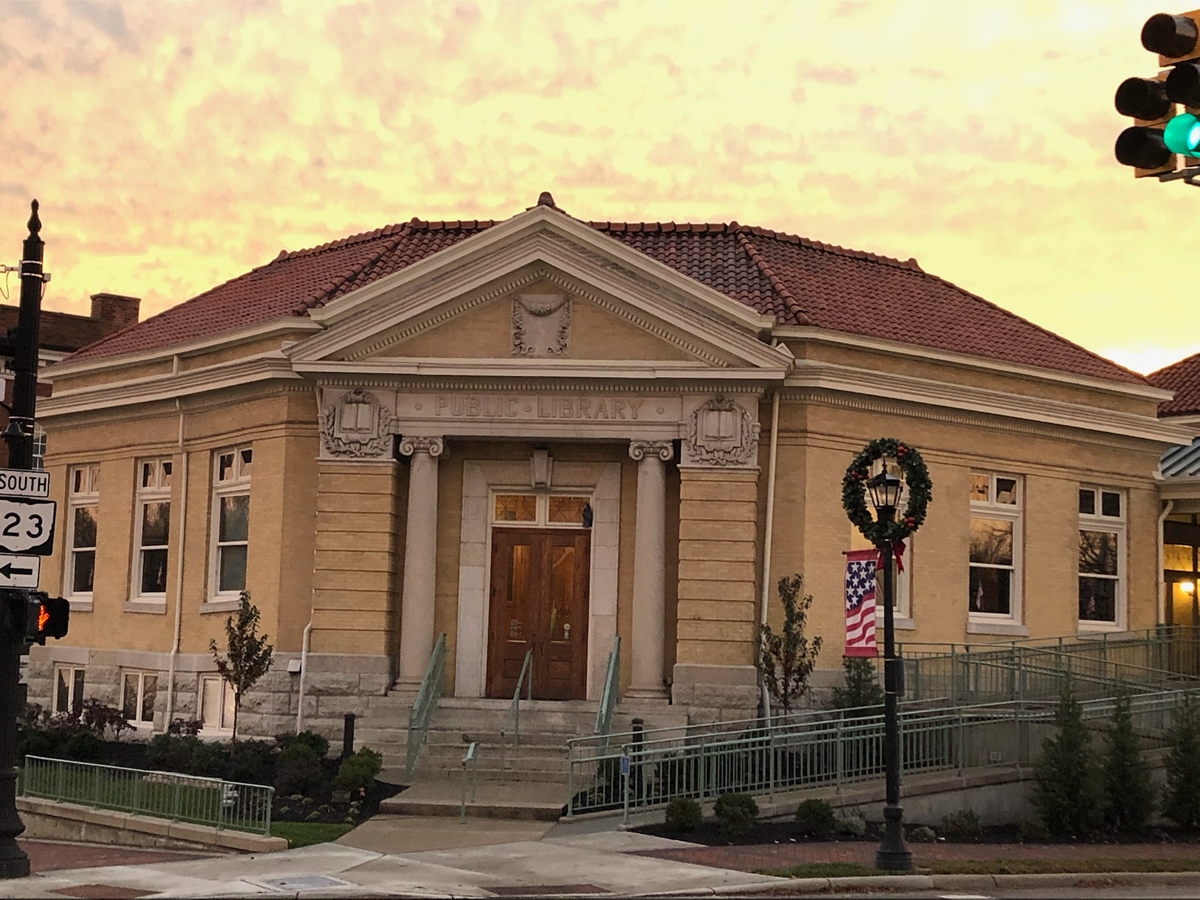 The Carnegie library in Lebanon, Ohio — funded by a $10,000 grant from Andrew Carnegie and supplemented by locally raised funds — opened in 1908. A large addition was built in the 1980s. / Photograph by the author.

I later encountered Carnegie libraries in other towns — like Traverse City, Michigan (where the library was also repurposed as a museum) and Lebanon, Ohio (where it is still used as a library). The townspeople in these places similarly spoke with pride about the fact that these were Carnegie libraries. 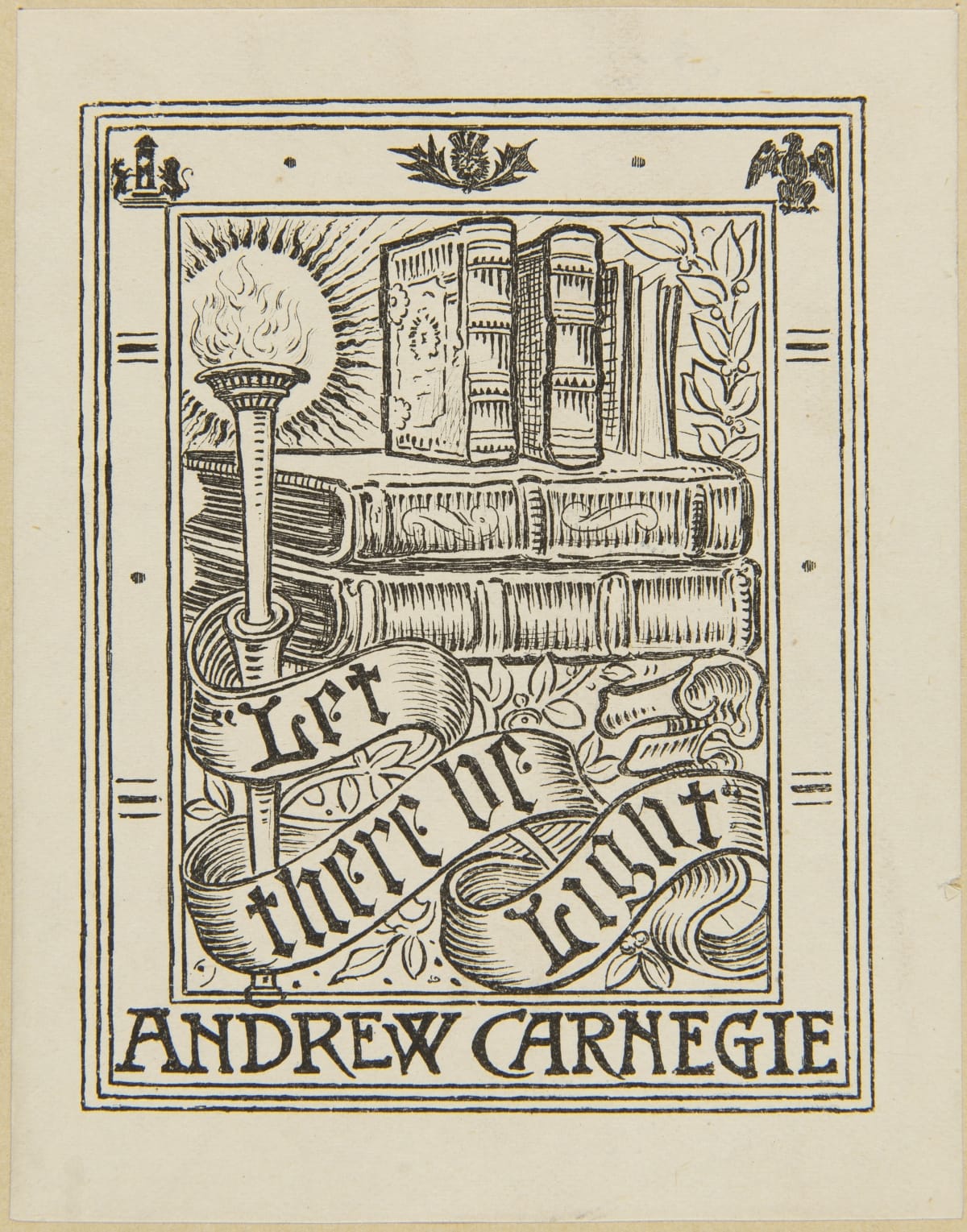 Carnegie libraries were the vision of Andrew Carnegie (1835-1919), a Scottish immigrant who was born poor but amassed an immense fortune from railroads, oil and steel. By the time he sold his Carnegie Steel Company for $250 million and retired, he was one of the wealthiest men in the world — perhaps the wealthiest.

As a youth working for a telegraph company in Allegheny, Pennsylvania (now part of Pittsburgh), Carnegie was introduced to a Colonel James Anderson, who generously opened his private library to young workers wishing to borrow and read books. This inspired Carnegie so much that he promised himself that if he ever became wealthy, he would provide similar opportunities to eager and deserving workers. 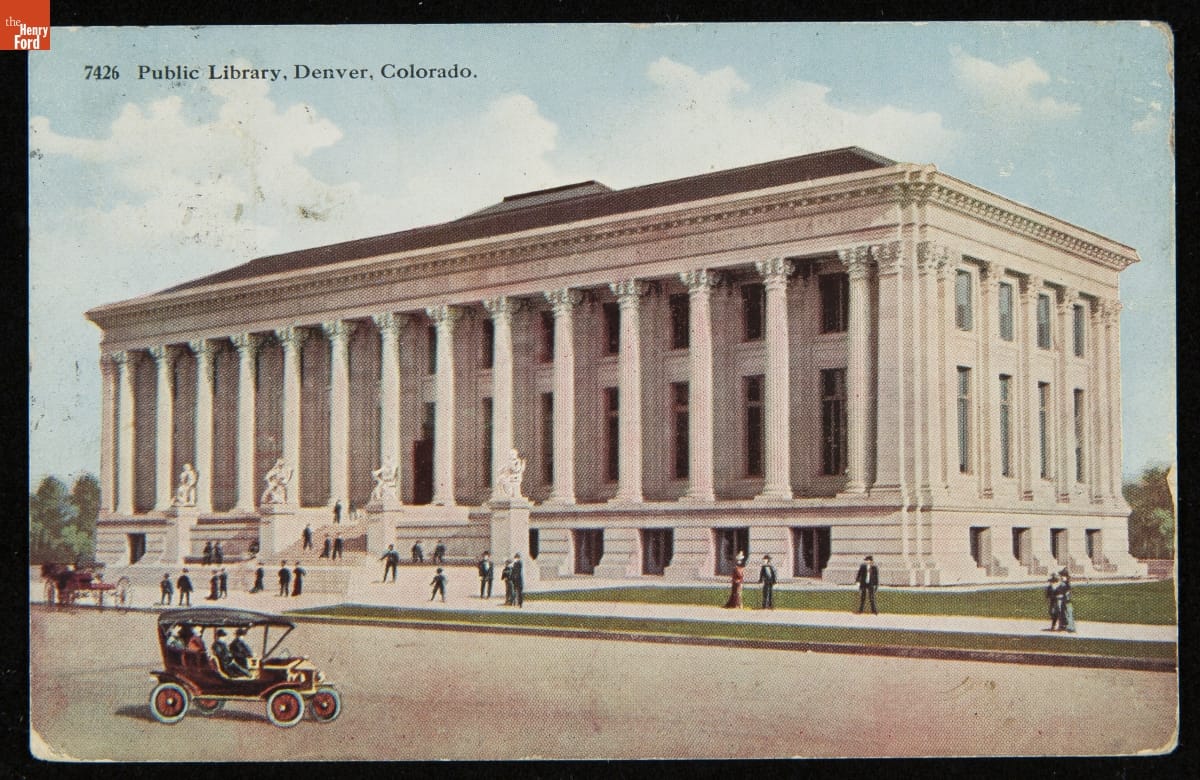 In 1910, Denver, Colorado, opened its Central Library building, an elegant Greek temple design made possible by a grant from Andrew Carnegie. Between 1913 and 1920, Carnegie also underwrote the construction of the city’s first eight branch libraries, which came to a grand total of $230,000. This building was decommissioned in 1956 when a new Central Library opened. / THF628038

Indeed, when Carnegie retired a wealthy man, he devoted the rest of his life to philanthropy, giving away some $350 million — nearly 90% of his fortune — to a variety of charities. At the same time, he developed a philosophy about wealth and philanthropy, which he described in an 1889 essay entitled, “The Gospel of Wealth.” In this essay, he asserted that the wealthy should use their riches for “lasting good” to society. They should live without extravagance, provide moderately for their dependents and distribute the rest of their riches to benefit the welfare and happiness of the common man — meaning not just anyone, but those who helped themselves, those who were interested in improving their own lot in life. 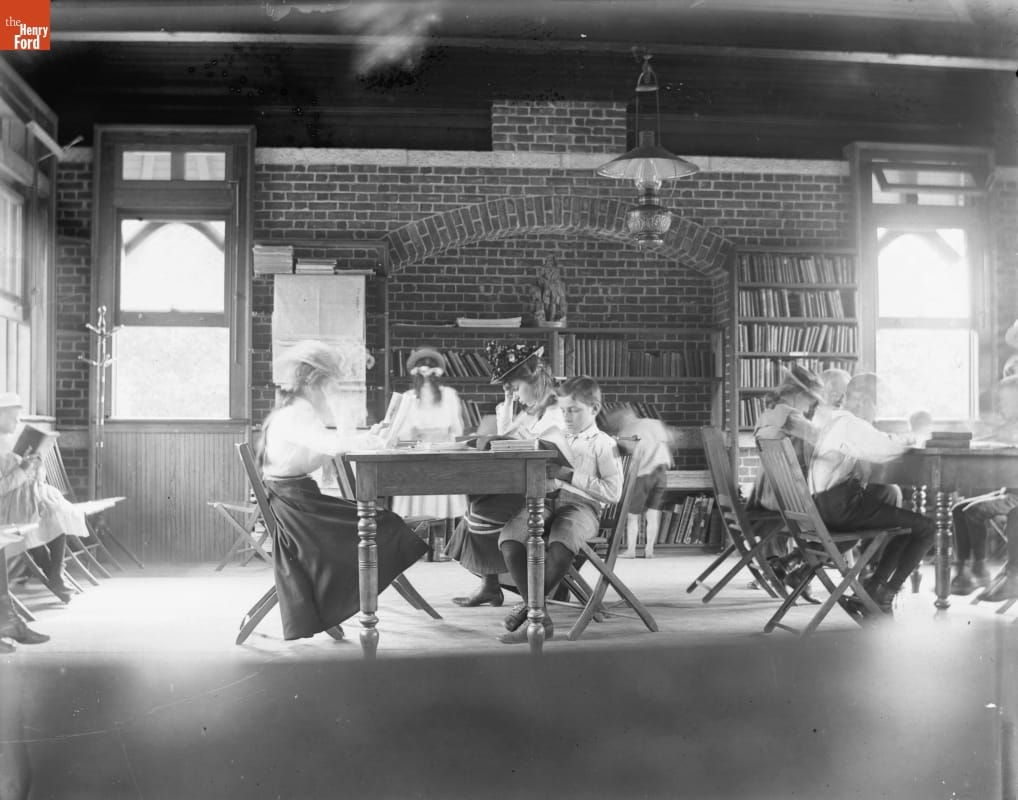 This free public library, which was designed by McKim, Mead & White and opened in 1904, was located on Manhattan’s Lower East Side. It was aimed at the varied immigrant populations — German, Italian, Jewish, Polish and Ukrainian — who inhabited that part of the city. / THF38047

This philosophy paralleled that of Progressive-era reformers of the time, who attempted to “remedy” the challenges inherent in the tremendous increase of immigrants arriving in America. These reformers believed that libraries were important to arming the new immigrants with knowledge to help them rise in society, become better voters by resisting the lure of dishonest politicians and avoid such unwholesome pursuits as drinking and gambling. 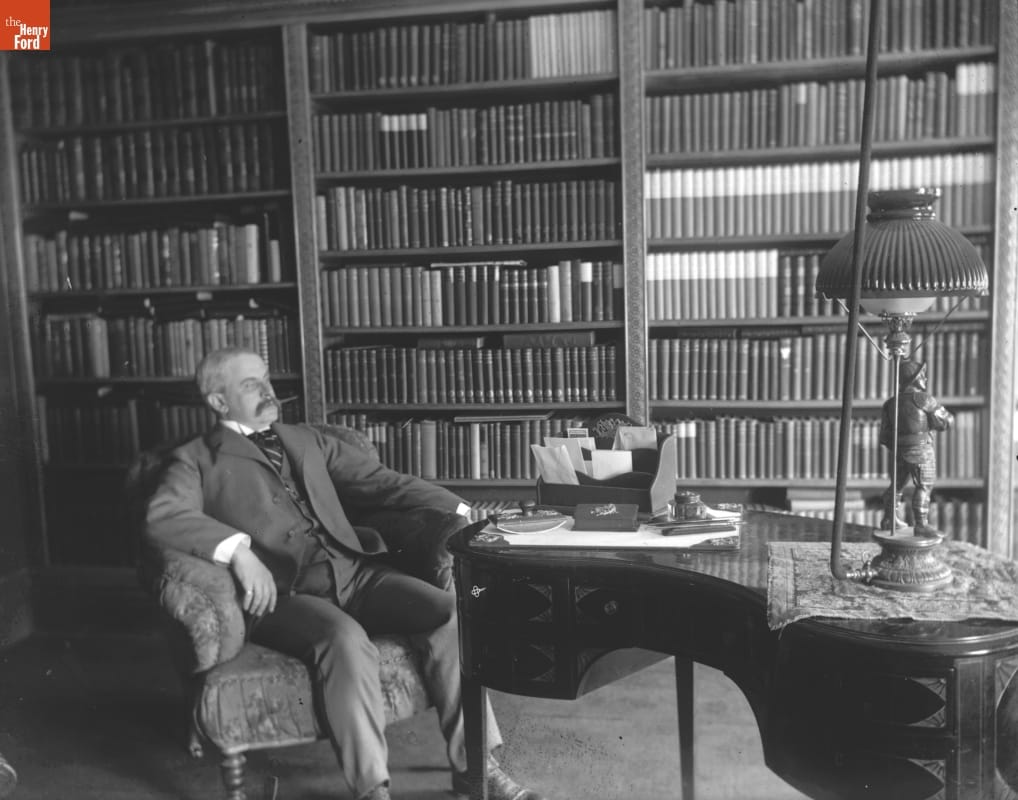 Wealthy, educated citizens often amassed private libraries for their own use. In this photograph, William J. Carr, justice of the Supreme Court of Kings County, New York, poses in front of his massive book collection. / THF38611

Free public libraries began to spread during the early 20th century, coinciding with new town developments. Before that time, most book collections were either privately owned, accessible by paid subscription or haphazardly stored in such public buildings as churches, post offices or city halls. But, although townspeople were high on ideals and ambition, these public libraries usually lagged behind in development, as money was tight, book collections were lacking and establishing places for reading just seemed to be a lower priority than such essential city services as public transportation, sanitation and schools. 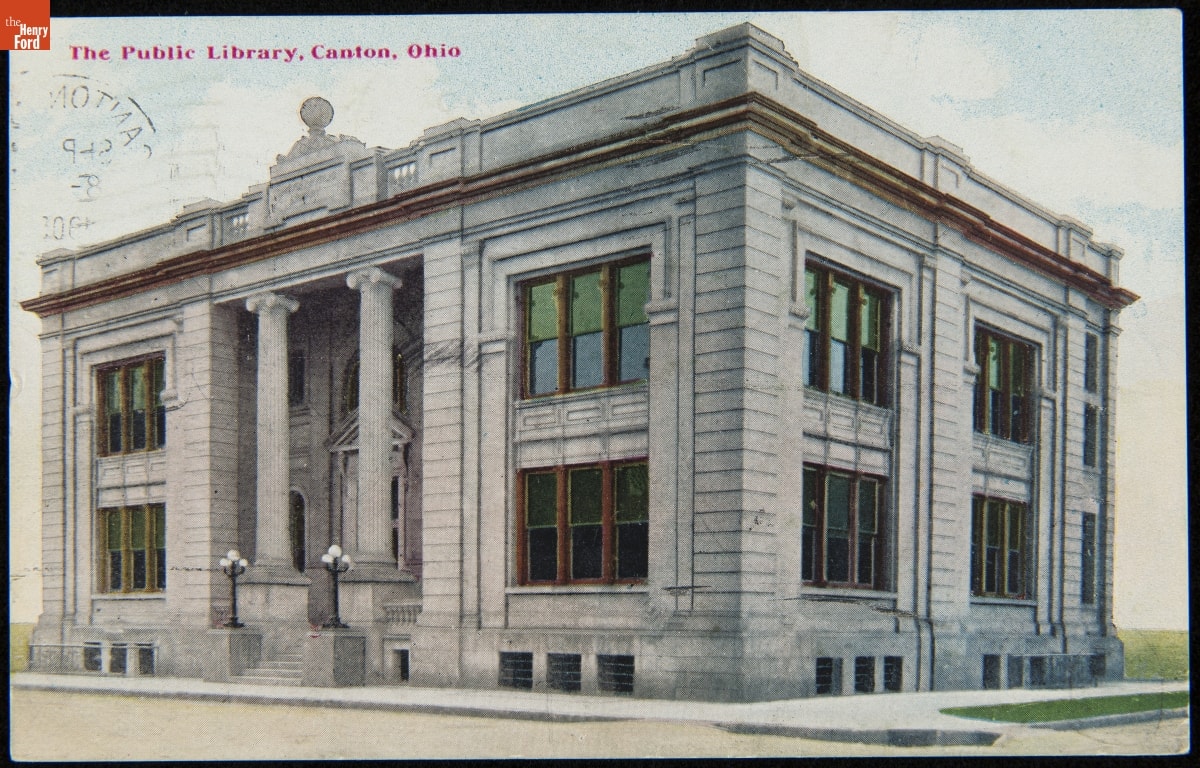 When the citizens of Canton, Ohio, received Carnegie funding for a new library building, they enthusiastically held a design competition. Canton architect Guy Tilden won the competition and designed a stately new library, which opened in 1905. It was listed on the National Register of Historic Places in 1982. / THF289036

Enter Andrew Carnegie, armed with happy memories of times spent as a youth in Colonel Anderson’s library and committed to helping those who wanted to improve their own lives. The first of his funded libraries opened in 1889, in Braddock, Pennsylvania, home to a Carnegie steelworks. This was followed by a library in Carnegie’s own hometown of Allegheny.

Between 1886 and 1919, Andrew Carnegie donated more than $40 million to 1,679 new library buildings in communities of all sizes across America. Carnegie libraries were constructed in 46 states — with Indiana leading the way (165), followed by California (142), Ohio (111), New York (106), Illinois (106) and Iowa (101). Carnegie also funded libraries in other countries — the first being in his birthplace of Dunfermline, Scotland. 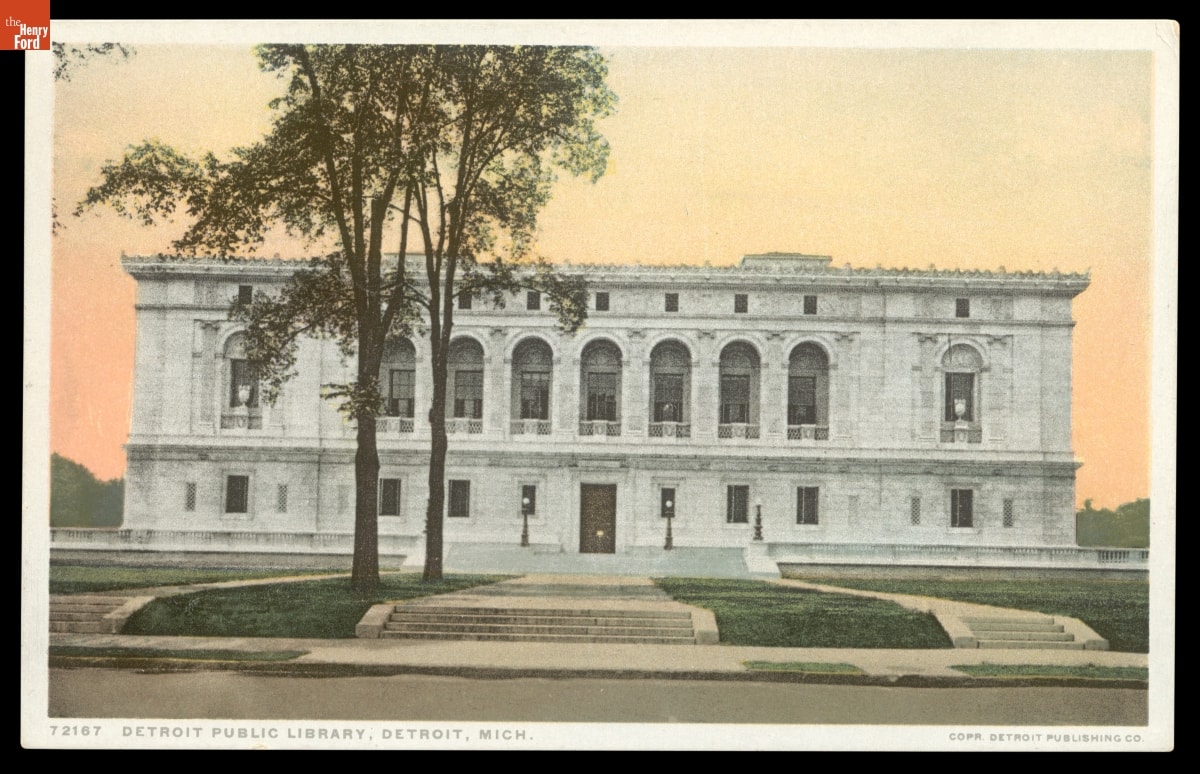 As Detroit grew by leaps and bounds in the early 20th century, the existing library building quickly outgrew its capacity. In 1910, the city accepted funds from Andrew Carnegie to build a new library to be situated along rapidly expanding Woodward Avenue. New York City architect Cass Gilbert (designer of the famed Woolworth Building) won the design competition for the new building, which opened in 1921. North and south wings were added in 1963. / THF119073

Towns had to apply to receive funding for a Carnegie library. In their applications, townspeople had to promise that their town owned the land on which the library would be built and that they would commit to the library’s ongoing maintenance and staffing. The architectural styles of the buildings typically followed popular building styles of the time and were often the result of local design competitions. In many small towns, the Carnegie library stood out as the most imposing structure, symbolizing that community’s dreams of prosperity and hopes for the future. 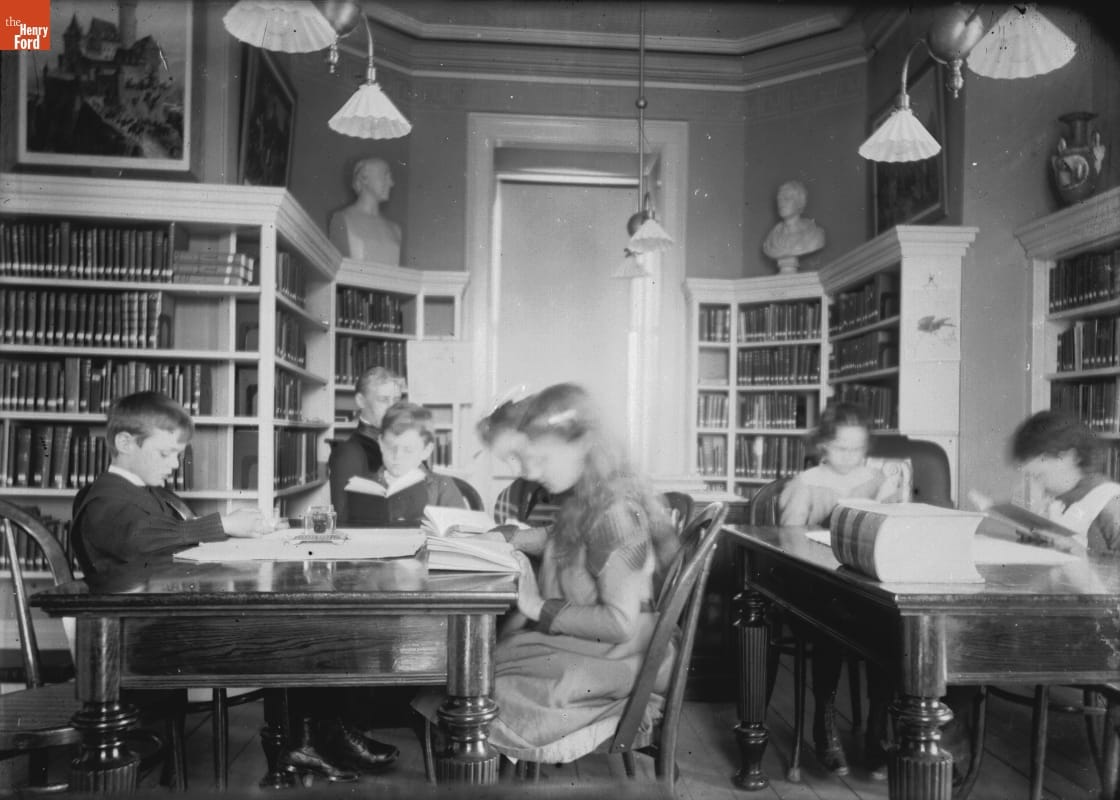 Although a free public library had existed in Newark, New Jersey, since 1884, this building, which opened in 1901, featured the new innovation of open stacks. / THF38387

A unique feature inside these libraries was "open stack" shelving that encouraged browsing. (Before, a clerk or librarian would retrieve requested books from “closed stacks.”) The libraries also tended to be open in design so that a librarian stationed at a central desk could keep a watchful eye over the entire library. Unfortunately, over time, staffing and maintenance did become an issue in many towns, as city planners were thrilled to receive a grant to build their library but then found themselves strapped for funds to support and maintain it. 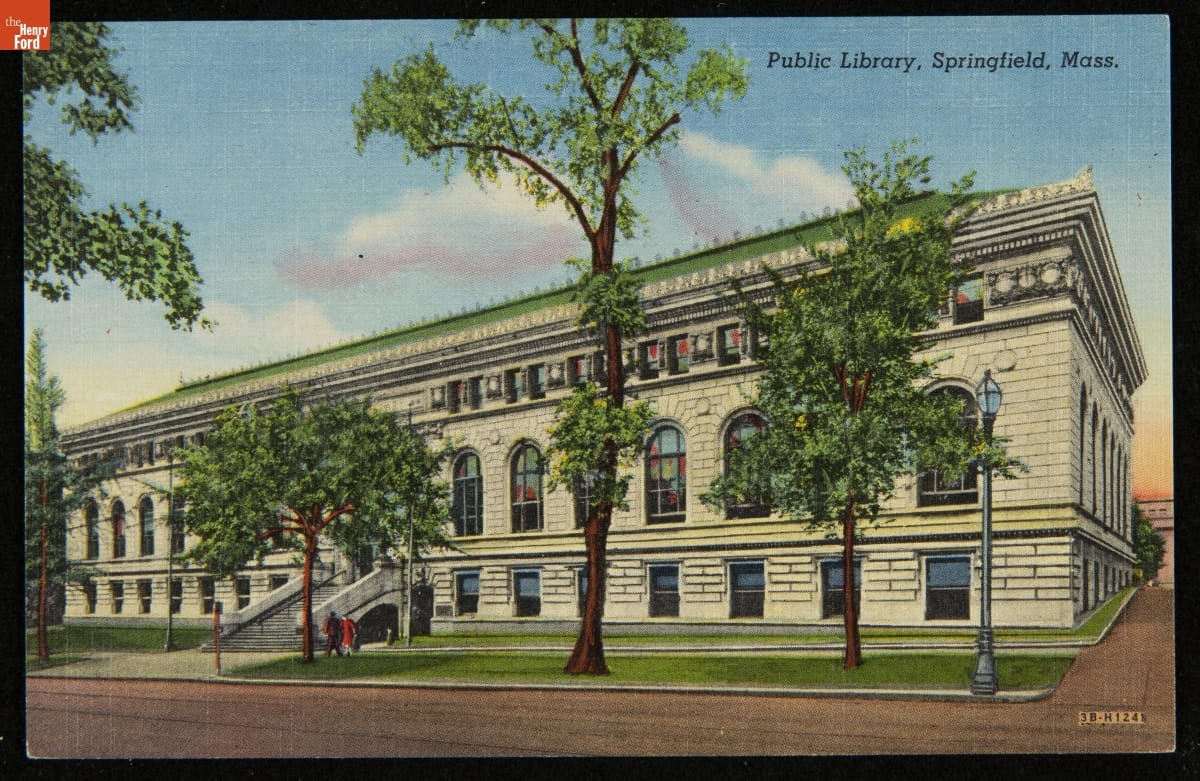 In 1905, Andrew Carnegie donated an initial $260,000 to build a central library and three branch libraries in Springfield, Massachusetts (with enthusiastic contributions from local citizens, he increased his donations twice). An Italian Renaissance Revival-style design was chosen for the building, which opened in 1912 and featured a bronze bust of Andrew Carnegie in the central rotunda. In 1974, the library was placed on the National Register of Historic Places. / THF628058

Some people questioned Andrew Carnegie’s motives in funding these libraries. In 1892, Carnegie refused to end violence caused by strikebreakers at his company's Homestead Steel Works, forever staining his reputation. People criticized him for being ruthless, for funding libraries as a personal monument, for funding institutions that focused on the poor, or for focusing myopically on libraries as a panacea to society’s ills. Black activists criticized him for reinforcing Jim Crow (segregationist) policies while white racists accused him of potentially forcing integration into towns that strictly adhered to Jim Crow laws. 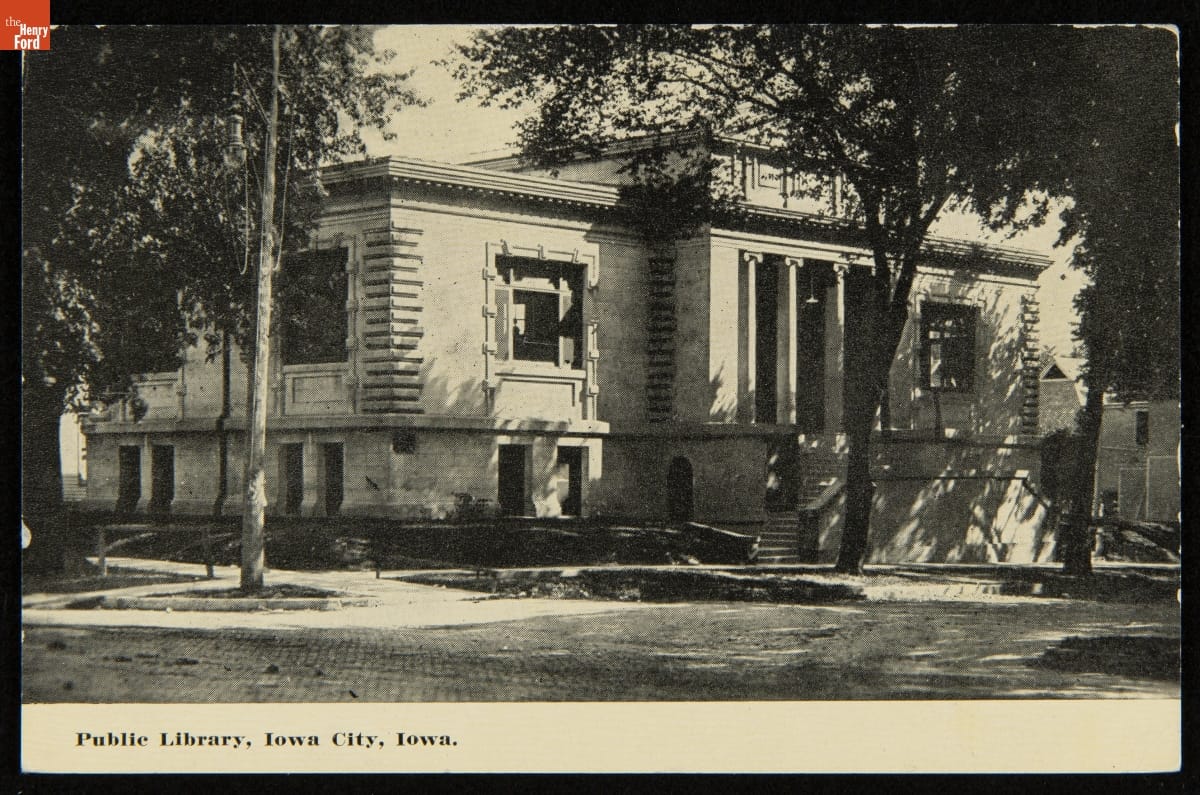 Iowa City, Iowa, was undergoing extensive growth at the turn of the century, and the Library Board of Trustees saw the wisdom of building a permanent home for its library. The board sent an inquiry to Andrew Carnegie during the summer of 1901 and was awarded a $25,000 grant (with an additional $10,000 the following year) for the library’s construction. The library opened in 1904. / THF628004

In the end, despite questions and criticism, large cities and small towns alike could not resist the lure of outside funding for a public library. To those who did get Carnegie funding to build a free public library, their libraries were, and have remained, sources of civic pride, epitomizing the sort of democratizing spirit that pervaded American communities in the early 20th century.

Donna R. Braden is senior curator and curator of public life at The Henry Ford.