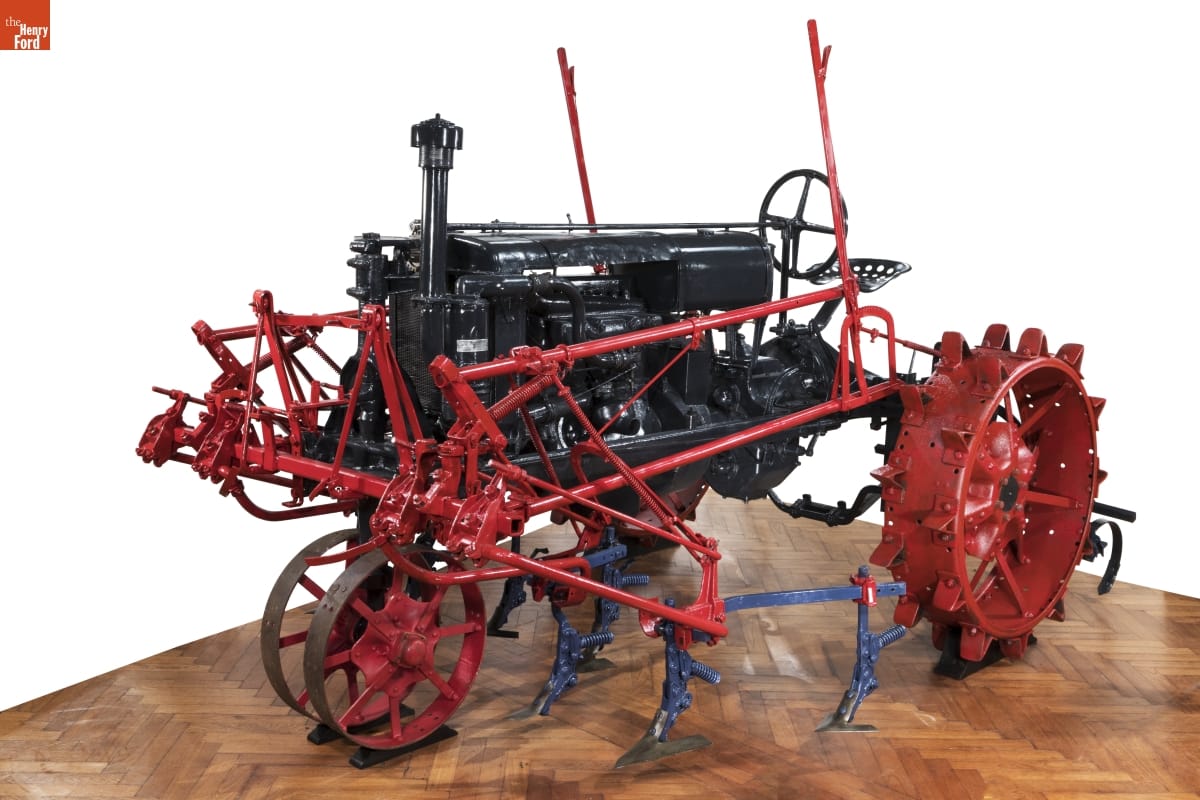 International Harvester introduced the first commercially successful row-crop tractor, the McCormick-Deering Farmall, in 1924. It represented a whole new approach to farming. Today we think of corn, cotton, soybeans, and other crops as being planted and harvested in long rows, but before the 1920s, farmers often planted crops in a grid pattern on smaller fields, which they cultivated using draft animals and a shovel plow.

As tractor usage increased, farmers were able to reduce the amount of land dedicated to housing and feeding draft animals. On average, farmers could re-purpose five acres of land for every horse that was no longer needed. This increase in usable land for farming provided a powerful incentive for farmers to own a tractor.

The McCormick-Deering Farmall was the first tractor to incorporate small, closely spaced front wheels that could travel between rows, and a high rear axle clearance to straddle the plants. It also included a power “take-off” unit to run machinery like the New Idea corn picker. International Harvester, with its Farmall tractor, overtook Ford Motor Company to lead the nation in tractor sales.

We recently completed some conservation work on the McCormick-Deering Farmall "Regular" tractor (52.38.4), which is on display in the Agriculture and the Environment exhibit in Henry Ford Museum of American Innovation. The Farmall “Regular” has gone through a series of restorations and re-interpretations since it came into our collection in 1952. 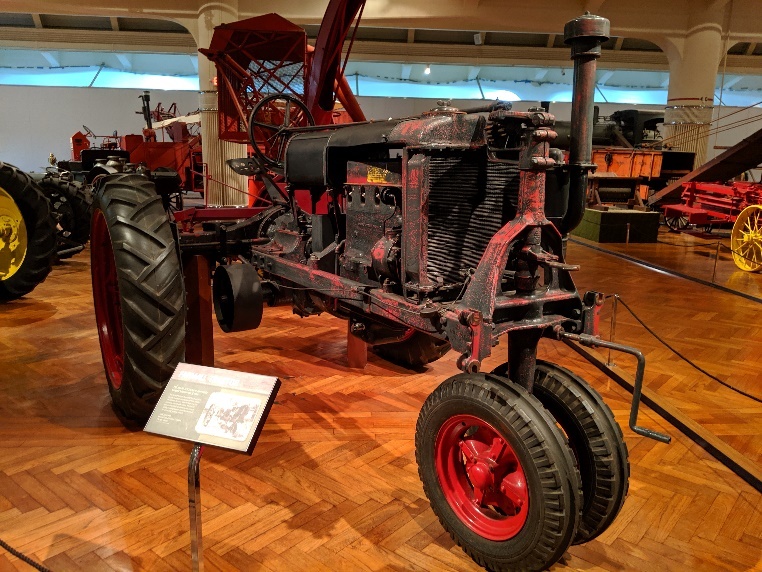 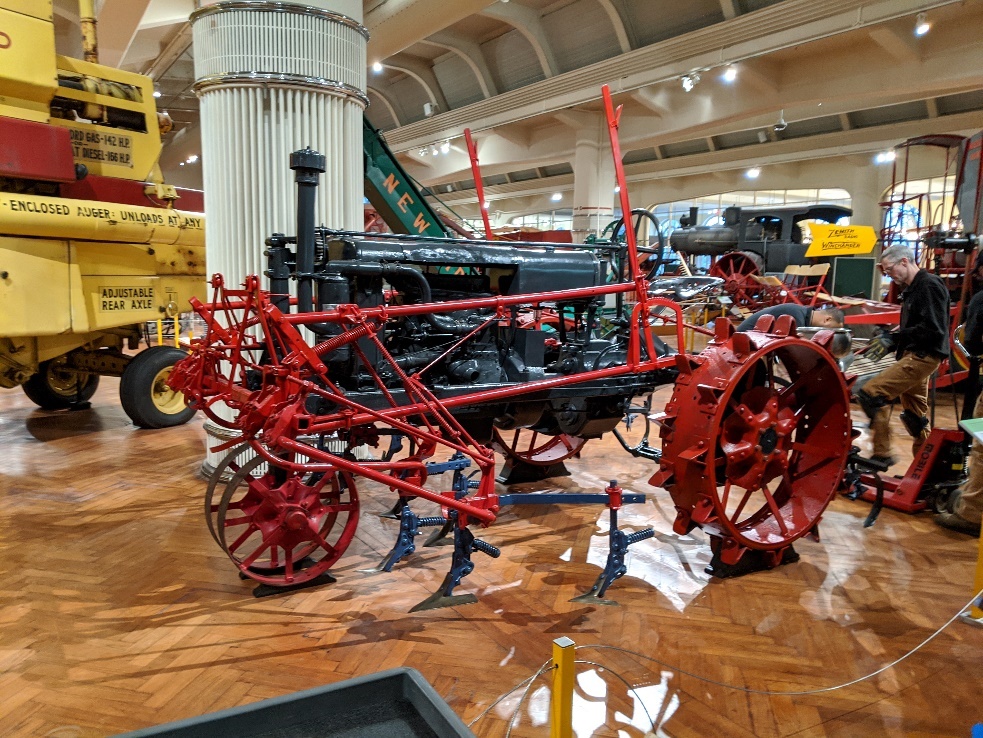 Before (above) conservation and after (below) 2019 conservation work, with the addition of the Farmall Cultivator No. HM-229 add-on kit and set of metal wheels.

In 2003, a team of volunteers, under the direction of a conservator, began the process of returning the tractor to its 1926 appearance. During this process, most of the newer Farmall red restoration paint layer was removed, as were F-20 parts that were not appropriate to the “Regular” model.

Most recently, we made the decision to retain the 1926 appearance and re-introduce the 1930s Farmall Cultivator No. HM-229 add-on kit, a compatible addition farmers could purchase. To do this, the tractor would need to be painted in appropriate colors. Luckily, our Curator of Agriculture and the Environment, Debra A. Reid, tracked down the manufacturer’s elusive colors: International Harvester Gray and Harvester Blue varnish enamel paint.

Harvester Gray was fortunately documented by Mark Stephenson at McCormick-Deering.com. The Harvester Blue was matched from residual paint on a gang beam that was hidden behind an installed cultivator part. The paint was compared with a manufacturer’s paint chart from the Wisconsin Historical Society. 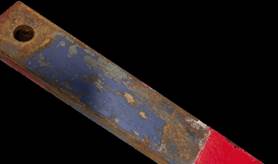 The residual Harvester Blue paint on the Cultivator’s gang beam. 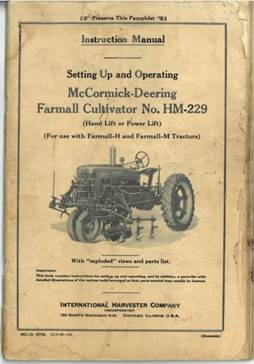 To aid in completion of this project, a copy of the manufacturer’s original instruction manual we obtained proved to be an invaluable resource. 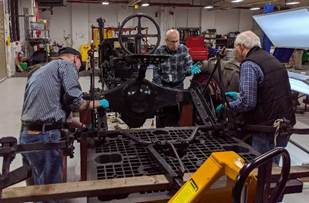 Conservation Specialist Andrew Ganem steers the tractor as it is towed by Exhibits Preparator Bernhard Wilson.

Logistics included towing the tractor to its display location at the museum and completing the rest of the assembly onsite in the museum; for ease of movement, the rubber wheels were used to maneuver the tractor into the museum. 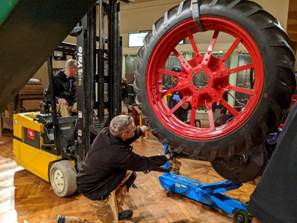 Exhibit Preparators Ken Drogowski on the forklift and Jared Wylie on the floor remove one of the 40” x 6” rubber wheels. 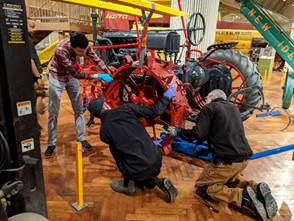 The rest of the cultivator assembly, which includes gang beams, two rear spring teeth, and ten gang sweeps, was added after the tractor returned to the exhibit area. A set of 25” x 4” front metal wheels and 40” x 6” rear metal wheels replaced the rubber wheels. This process required a methodic approach to safely complete, using forklifts, straps, a watchful eye for concerns and risks, and general tools. Once removed, the set of rubber wheels were returned to collections storage.

This work could not have been completed without the help of staff from the collections management, conservation, curatorial, and exhibits teams at The Henry Ford, as well as our dedicated volunteers Glenn Lysinger, Doug Beaver, Jim Yousman, Larry Wolfe, Harvey Dean, Neil Pike, Deb Luczkowski, Maria Gramer, and Eric Bergman.

Check out the recently conserved tractor and a variety of other agricultural items in the Agriculture exhibit in Henry Ford Museum of American Innovation.


Cuong T. Nguyen is Conservator at The Henry Ford.