Crispus Attucks and Evolving Perceptions of the Boston Massacre 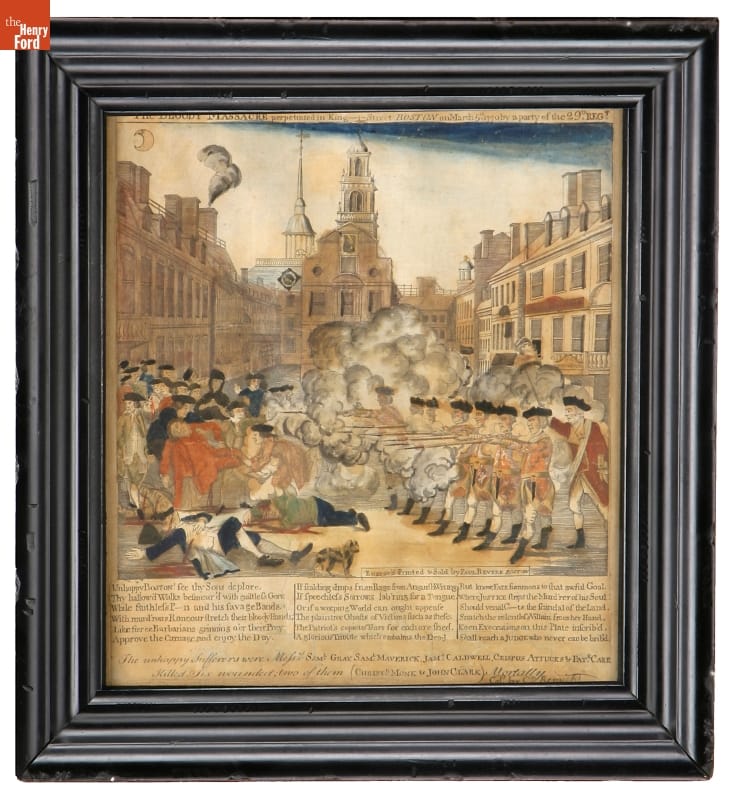 “The Bloody Massacre,” 1770, engraved by Paul Revere and hand-colored by Christian Remick. / THF8141

On March 5, 1770, in King Street in Boston, Massachusetts, several British soldiers fired into an angry group of civilians who had been taunting them. When the shooting was over, five of these civilians lay dead or dying. The first to fall, it is believed, was a man of African American and Native American heritage named Crispus Attucks.

The event, which soon became known as the Bloody Massacre, or—over time—the Boston Massacre, incensed Bostonians to such an extent that it came to be considered a defining moment in the lead-up to the American Revolution.

The more than 200 eyewitness accounts that were collected afterward agreed on some points but disagreed on many others. In the end, we have only impressions, fragments, and often competing narratives of what people remembered seeing. The sequence of events might have gone something like this: The initial angered group approached a guard in front of the Customs House and started insulting him and pelting him with snowballs and chunks of ice. The situation quickly escalated as the crowd grew larger. The guard called for reinforcements. Other British soldiers, including a captain, arrived. More townspeople joined in, throwing snowballs and insults at the troops. A soldier was knocked to the ground. He stood up, yelled, and fired his musket into the crowd. Then several other soldiers fired their weapons, killing three and mortally wounding two others.

Perhaps this is the sequence of events. We will never know for sure.

Whatever people thought they saw, almost immediately the popular press took full advantage, describing the event in endless detail and hailing the fallen victims as martyrs in the fight for liberty. Even the use of the word “massacre” implied a premeditated, cold-blooded, intentional act by British soldiers against American patriots.

This event did not occur in isolation but was an outgrowth of months of increasing tension between the British and Boston civilians, who were angered by the relentless passage of new British-imposed taxation laws. In 1768, British soldiers had been deployed to Boston to try to maintain order there. 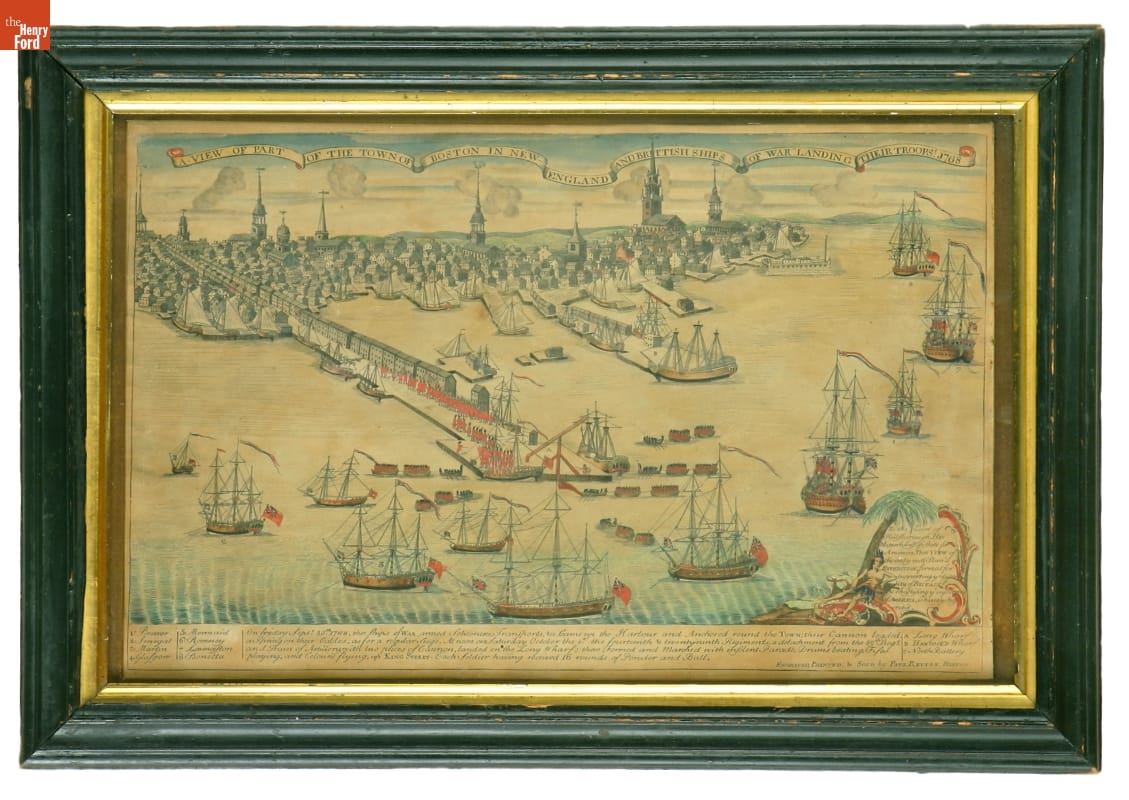 “A View of Part of the Town of Boston in New-England and British Ships of War Landing Their Troops!” 1768, engraved by Paul Revere and hand-colored by Christian Remick. / THF11644

In fact, the angry individuals who had initially taunted the soldiers were not patriotic Sons of Liberty but working-class day laborers, apprentices, and merchant sailors. These individuals had a particularly personal gripe against the British soldiers: the soldiers, who were poorly paid, often competed with them for jobs, and this competition inevitably led to lowered wages.

In the end, it didn’t matter that the initial crowd who started the fracas was motivated more by economic reasons (jobs, wages) than ideological ones (liberty, independence). Nor did it matter that John Adams’ brilliant defense of the soldiers eight months later in court played to the jury’s prejudices against race and class by labeling the angry crowd as an unruly mob of young, lower-class, Black and Irish sailors. Bostonians were riled up. And the fact that all but two soldiers were acquitted at the end of their murder trial further inflamed them. 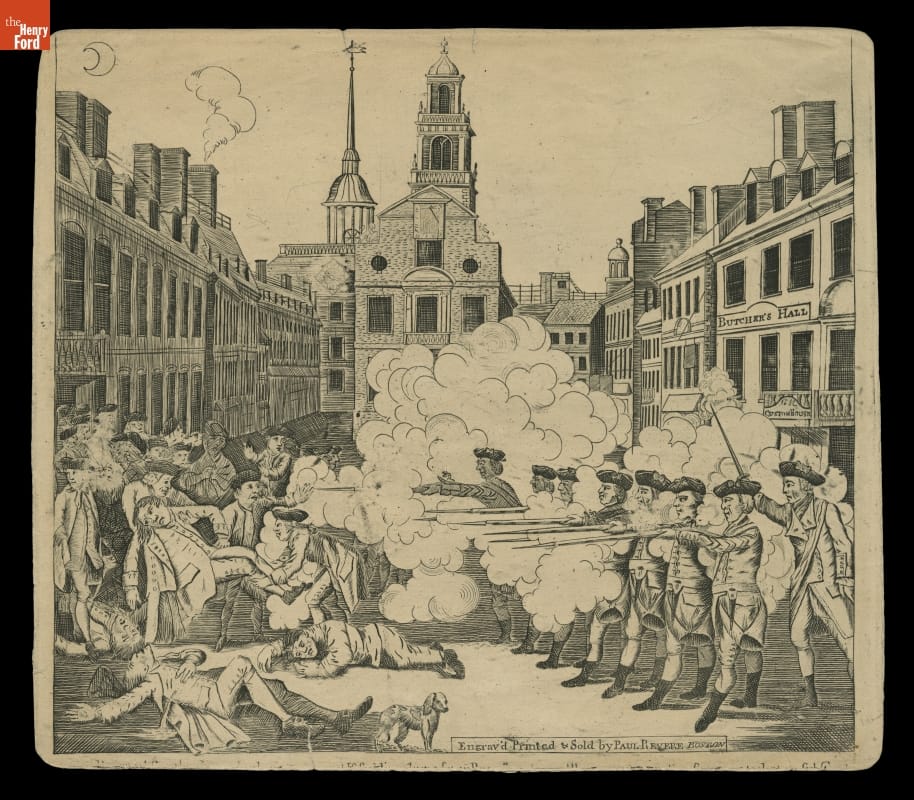 Engraving of “The Bloody Massacre,” created about 1800 from the original 1770 Paul Revere print, showing a clearer depiction of the Butcher’s Hall sign than the hand-colored lithograph shown at the beginning of this post. / THF130817

One Boston patriot, engraver Paul Revere, decided to use this event to make a larger political statement (for more on Paul Revere, see “Paul Revere and The Henry Ford's Tie to Tea”). Basing his engraving upon an as-yet-unpublished rendering created by artist Henry Pelham, Revere was able to complete his own engraving ahead of Pelham’s and start disseminating a mere three weeks after the event. He gave it the dramatic title, “The Bloody Massacre: Perpetrated in King Street, Boston on March 5, 1770, by a party of the 29th Regt.” This title ensured that the focus would be on the shooting, the place, and particularly on the “guilty”—i.e., the soldiers.

Revere cleverly heightened other details to make certain points—the orderly lineup of British soldiers firing into the American crowd, their actions depicted as brutal and deliberate; the colonists dressed as gentlemen rather than laborers, their behavior seen as innocent and defenseless; and, above the soldiers’ heads, a sign reading “Butcher’s Hall,” rather than the actual Customs House, to underscore the goriness of the event. All of these details—and more—were, in fact, inaccurate and misleading. But they certainly shaped public opinion. The narrative told within this print would endure for centuries—even to the present day. It was possibly the most effective piece of war propaganda in American history.

Noticeably absent in Paul Revere’s engraving is the aforementioned Crispus Attucks—generally thought to be the first casualty of the Boston Massacre. The reason for this? Likely, depicting a mixed-race, working class, itinerant sailor from out of town would not have played to the public sentiment that Revere was aiming for. Only later did Attucks emerge as the most famous of the five victims of the Boston Massacre.

What do we know about Crispus Attucks? Admittedly, not much. Historians believe he was born of an enslaved African American father and a Native American mother. He spent his early life enslaved to a man in Framingham, Massachusetts. At age 27, it is believed, he ran away (about 20 years before the Boston Massacre) and was never apprehended (he might have changed his name to avoid detection). An ad for a runaway slave that was possibly Attucks described him as 6’2”, with short, curly hair and a robust physique.

He apparently made his way to Boston, where he sought work as a sailor (one of the few trades open to non-whites), spending most of his time on whaling ships, and when on land, was a rope-maker (a typical dockside job for sailors). He was often at sea, and on this particular day, March 5, 1770, he was waiting for an opportunity to ship out. Not only could his anger at the British soldiers have been due to job competition, but he, like other merchant sailors, also faced the danger of being forcibly impressed into the British Royal Navy (for more on the lives and risks of African American merchant seamen, see “Piecing Together Black History: A Case Study”).

Accounts vary widely as to Attucks’ role in the Boston Massacre. Was he a leader and instigator of the angry crowd, as some claimed? Did he step into the fray, swinging a stick and grabbing a soldier’s bayonet, as others described? In defending the British soldiers, John Adams sought to distance Attucks (and the other so-called “rabble-rousers”) from the upstanding, respectable, solid citizenry of Boston. He described Attucks’ behavior as “mad” and declared him the self-appointed leader, chief to blame for the “dreadful carnage.” Other testimonies claimed he was not the leader or an instigator, but stood off to the side, watching the melee unfold. Rather than angrily wielding a stick, he was quietly leaning on one.

Most people at the time considered him—along with the other fallen victims—a martyr, a hero. Breaking with usual segregation customs, Attucks was accorded an honored burial alongside his fallen comrades at the Granary Burying Ground on Tremont Street. Burial rites for the victims, held at Faneuil Hall days later, reportedly attracted some 10,000 of Boston’s 16,000 citizens. 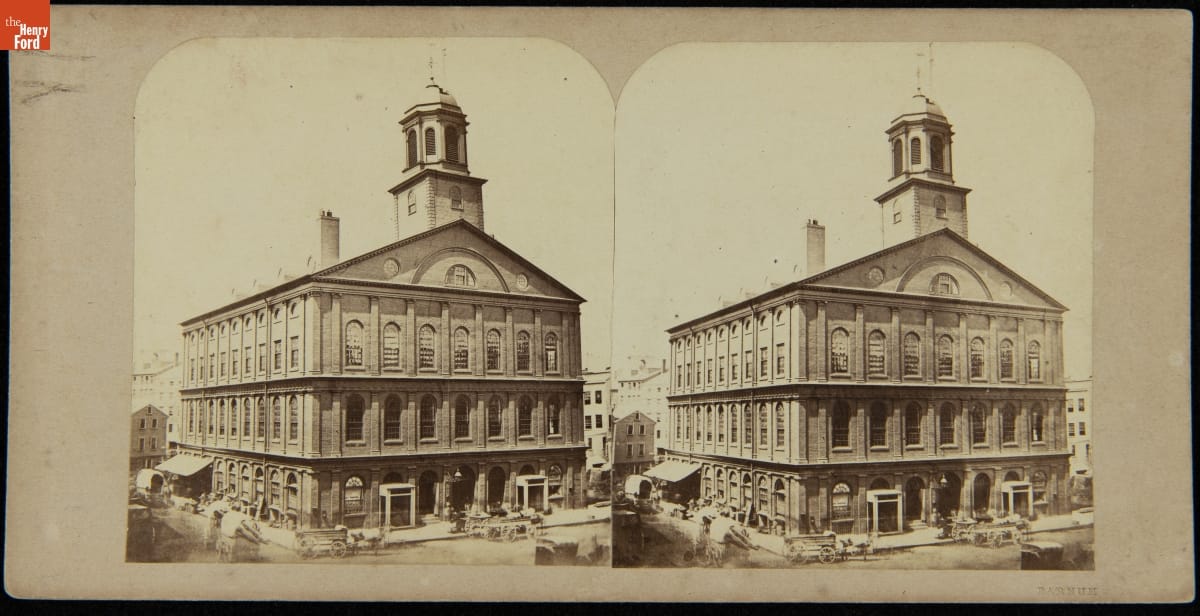 When seen through a special viewer, the two pictures in this stereograph give a three-dimensional effect. This circa 1859 stereograph is of Faneuil Hall, the public meeting hall that was the site of the burial rites for the Boston Massacre victims back in 1770. / THF278882

Several decades later, Attucks was recast as the central figure of the conflict. During the decades before the Civil War, anti-slavery advocates memorialized him in order to garner support to end slavery—calling him the first martyr in the fight for American independence. 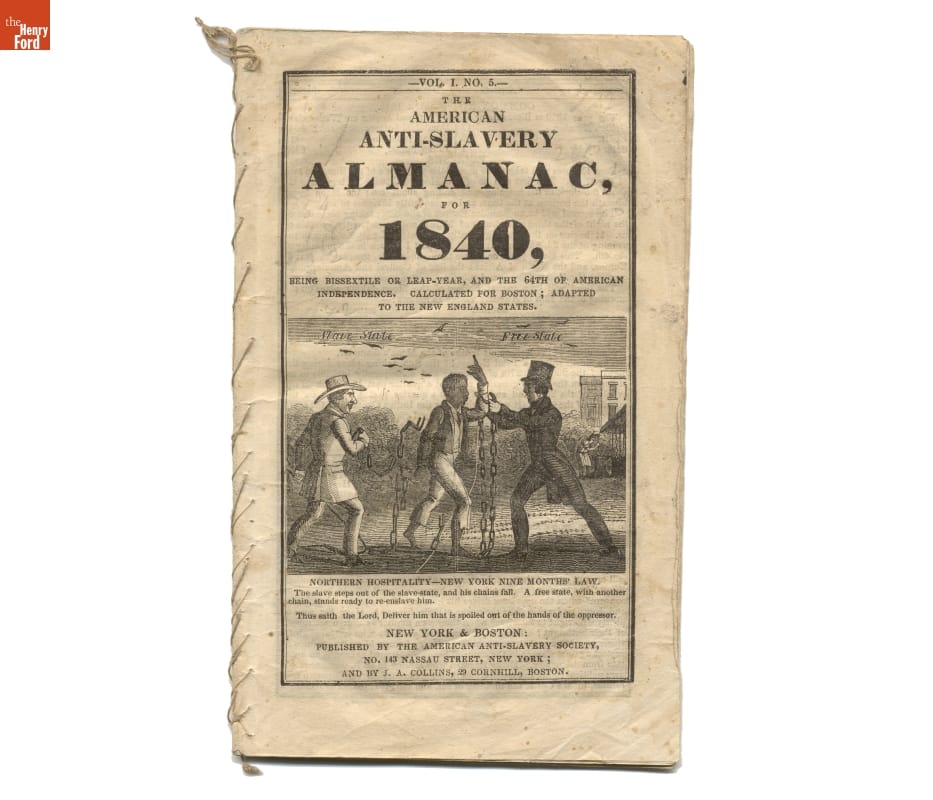 The anti-slavery press, centered in northern states like New York and Massachusetts, produced and sold almanacs like this one that featured provocative cover illustrations depicting the brutality of slavery. / THF7209

In 1855, in direct contrast to Revere’s earlier engraving, artist William L. Champney featured Attucks in a brand-new rendering of the Boston Massacre, placing him at the very center of the conflict. The rendering was turned into a popular color print by J. H. Bufford.

In 1888, a monument (still standing today) was unveiled in Boston Common honoring all five victims of the massacre, but it focused attention on Attucks and was ever after referred to as the Crispus Attucks Monument. During the Civil Rights movement of the 1950s–1960s, Attucks became a powerful symbol of African Americans’ struggle for freedom and equality. In his seminal 1964 book Why We Can’t Wait, the Reverend Dr. Martin Luther King, Jr. reinforced the symbolic role of Crispus Attucks: 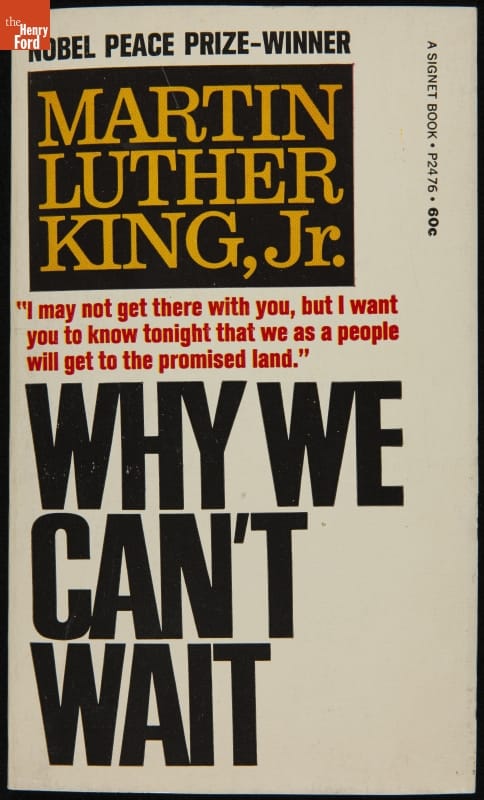 In recent years, Attucks’ role in the Boston Massacre has been reimagined again, this time as the first African American victim of unrestrained police brutality.

The role that Crispus Attucks played in this event was debated from the beginning. Was he the leader of an unruly mob angry about jobs? Was he a hero and a martyr, fighting for liberty? In fact, his most important role may be that of showing how perceptions of individuals can change over time. As historians and curators continue to sift through the documented details about the Boston Massacre, interpretations will change. But the power of this dramatic event, and the meaning people find within it, will endure.


Donna R. Braden is Senior Curator and Curator of Public Life at The Henry Ford. This blog post is part of a series that sheds new light on stories told within the With Liberty & Justice for All exhibition in Henry Ford Museum of American Innovation.