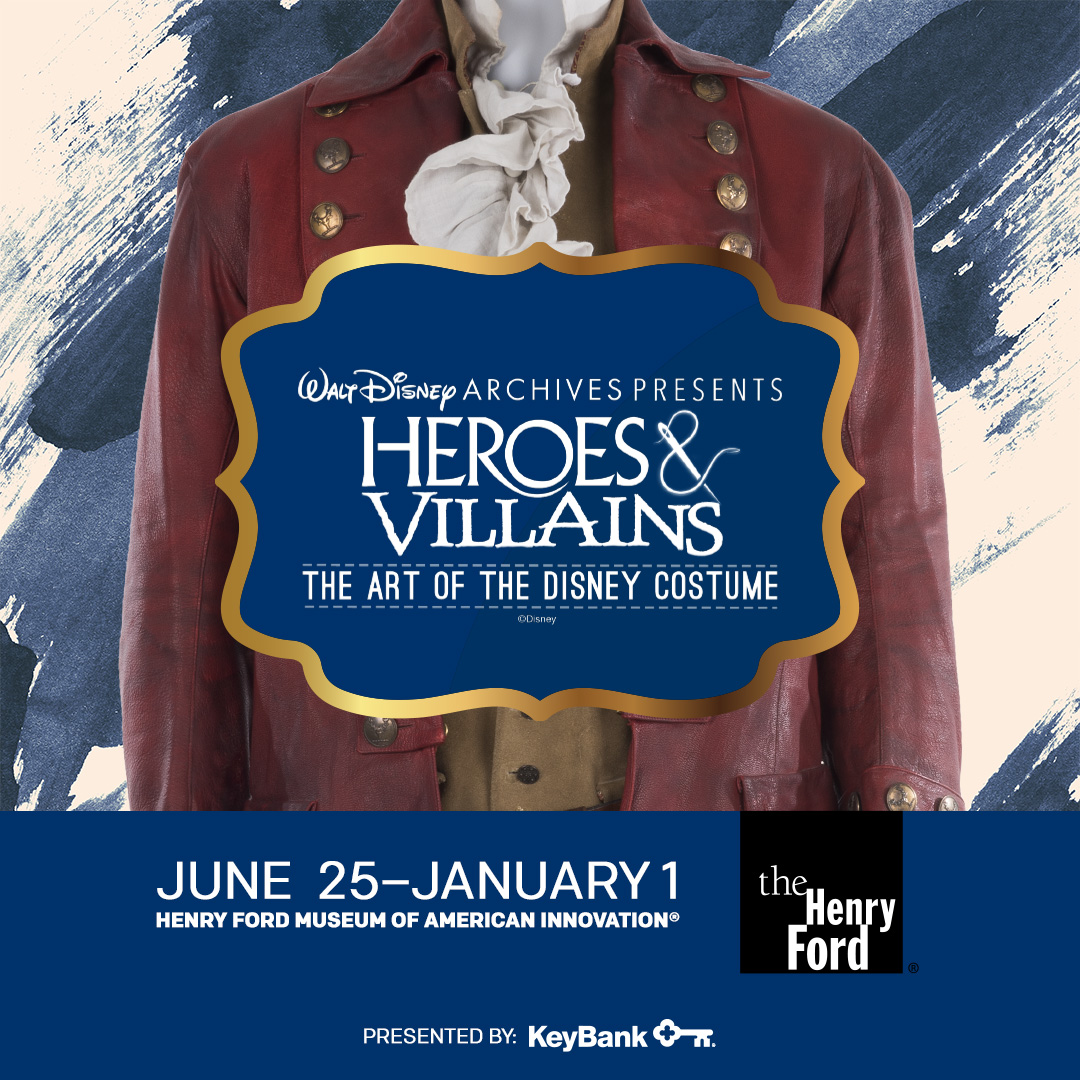 Poster for Heroes and Villains: The Art of the Disney Costume.

Inspired by the creative thought process of founder Walt Disney, everything that the Walt Disney Company does is based upon the power of story. This can range from the plot of a film to the backstory of a theme park attraction. In all cases, the sets, props, and costumes help to provide clues for the audience about story elements and characters.

The songs in a Disney film can also enhance the story, moving it forward through emotion, detail, and nuance. Through songs, the characters become more believable, helping the audience become more invested in the story. Here are some classic examples.

Babes in Toyland was a popular 1961 Christmas musical featuring a cast of Mother Goose characters. It starred Annette Funicello as Mary Quite Contrary, Tommy Sands as Tom Piper, Ray Bolger as the evil and villainous Barnaby, and Ed Wynn as the Toymaker. Annette Funicello later recounted that this was her favorite filmmaking experience.

The film was based upon Victor Herbert’s popular 1903 operetta of the same name. Herbert, a composer, wrote it with Glen McDonough, an opera librettist, in an attempt to outdo the extremely popular stage musical The Wizard of Oz, then playing on Broadway. (This was, of course, decades before the 1939 movie The Wizard of Oz.) The Babes in Toyland operetta continued to be performed for many years on the stage, where it was embraced as a children’s classic.

Disney’s was the second film version of the Babes in Toyland operetta released at movie theatres (the first was a film by Laurel and Hardy) and it was the first in Technicolor. In the Disney version, the plot was changed quite a bit and many of the song lyrics were rewritten. Some of the song tempos were even sped up.

“March of the Toys” is the best-known portion of the score of Babes in Toyland. It was used in the sequence in which the Toymaker displays his toys for the human children who have strayed into Toyland. One can almost imagine the toys coming alive in this lively up-tempo march.

“Toyland,” a whimsical song about a magical land filled with toys for girls and boys, also debuted in the original version of Babes in Toyland. This song still shows up on Christmas playlists, as it has been covered by many vocalists over the years, including Nat King Cole, Perry Como, Jo Stafford, Johnny Mathis, and—most notably—Doris Day.

“No One is Alone” comes from the 2014 Disney musical fantasy film Into the Woods, which was adapted from a 1986 musical theater production. This song was created by American composer, songwriter, and lyricist Stephen Sondheim. It appears at the end of Act II, as the four remaining leads (the Baker, Cinderella, Little Red Riding Hood, and Jack) try to understand the consequences of their wishes and decide to place community wishes above their own. The song serves to demonstrate that even when life throws its greatest challenges, you do not have to face them alone.

With its universal theme, this song has been used for many other purposes, including the Minnesota AIDS Project in 1994, and a speech by President Barack Obama during the tenth anniversary of 9/11.

Although this film is lesser known than many other Disney live-action films, Stephen Sondheim is one of the most important figures in 20th-century musical theater, known for tackling dark, complex, unexpected themes that range far beyond the genre’s traditional subjects. He wrote the music for West Side Story, Sweeney Todd: The Demon Barber of Fleet Street, and A Funny Thing Happened on the Way to the Forum.

Beauty and the Beast 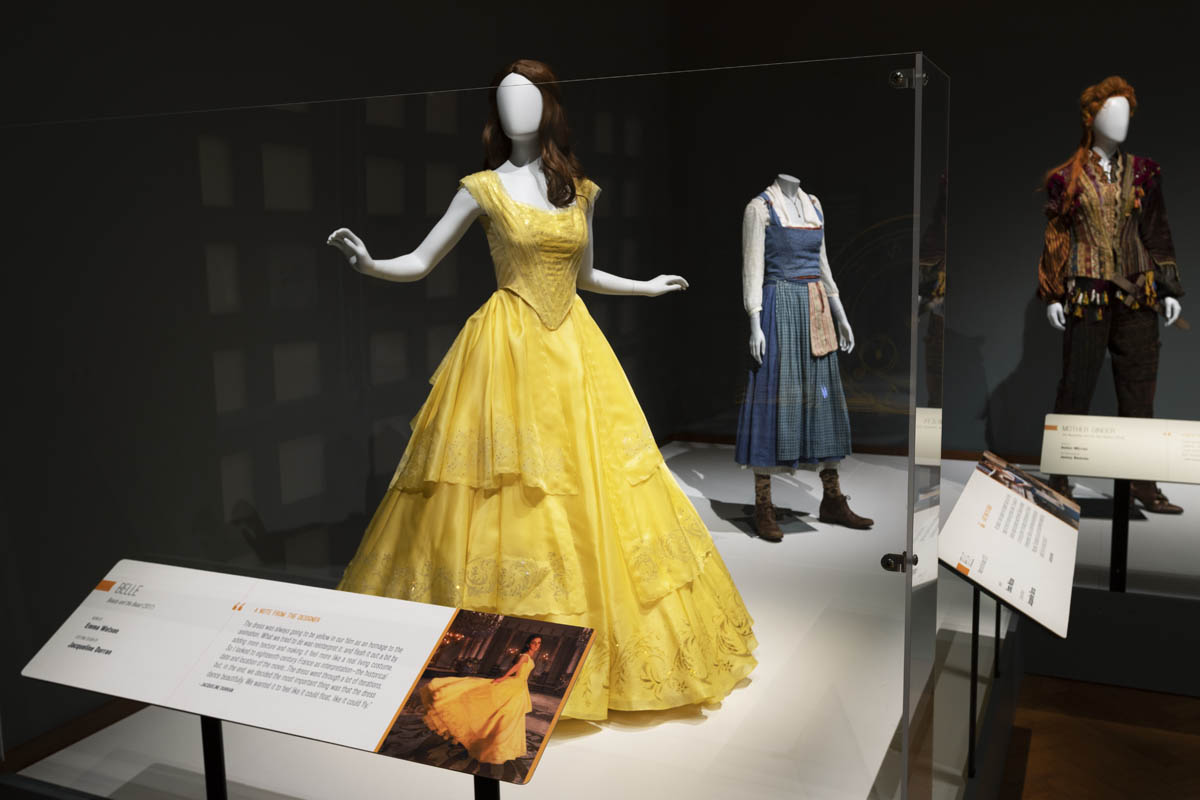 Costumes from the live-action movie Beauty and the Beast in the Heroes and Villains: The Art of the Disney Costume exhibit. / THF191450

The song “Beauty and the Beast” was written by lyricist Howard Ashman and composer Alan Menken for the Disney animated feature film of the same name (1991). This, truly the film’s theme song, was recorded by American-British-Irish actress Angela Lansbury in her role as the voice of the character Mrs. Potts. Lansbury was hesitant to record “Beauty and the Beast” because she felt that it was not suitable for her aging singing voice, but ultimately she completed the song in one take. It was also recorded as a pop song for the closing credits by the duet of Canadian singer Celine Dion and American singer Peabo Bryson. It was released as the only single from the film’s soundtrack. Both versions of “Beauty and the Beast” were very successful, garnering both Golden Globe and Academy Awards for Best Original Song.

Considered to be among Disney’s best and most popular songs, “Beauty and the Beast” has since been covered by numerous artists. In the 2017 live-action adaptation of the animated film, it was sung by Emma Thompson as Mrs. Potts and as a duet by Ariana Grande and John Legend during the end credits. In addition to Beauty and the Beast, Howard Ashman and Alan Menken collaborated on the music and lyrics for two other beloved Disney animated films—The Little Mermaid and Aladdin—before Ashman’s untimely death in 1991. 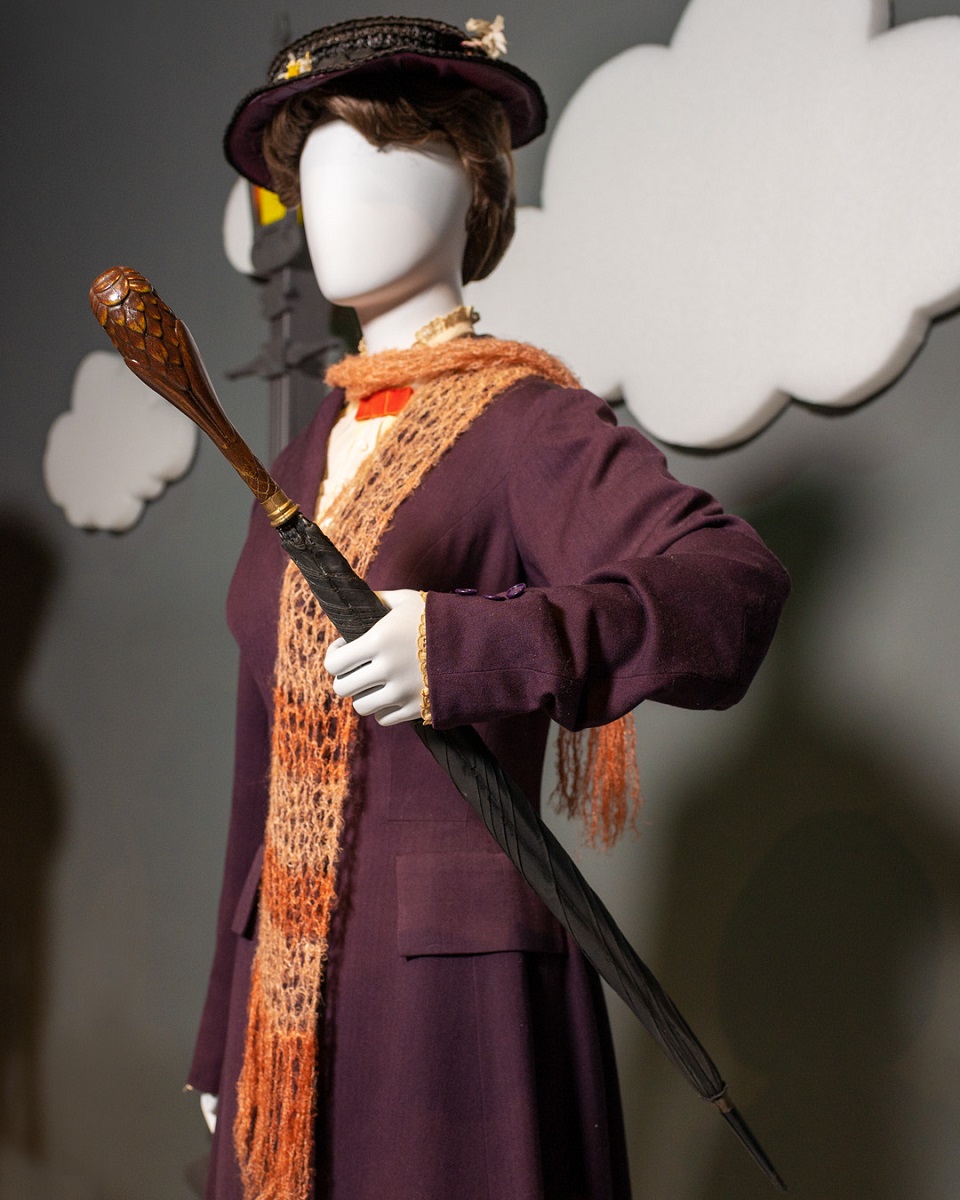 Costume from Mary Poppins in the Heroes and Villains: The Art of the Disney Costume exhibit. / Photo by Real Integrated for The Henry Ford

Mary Poppins was an incredibly popular 1964 Disney live-action film. All the songs for this film were written by the inimitable Sherman brothers. Robert and Richard Sherman were hired by Walt Disney himself to be his staff songwriters in 1961. While at Disney, they wrote more motion-picture musical scores than any other songwriters in the history of film, including Mary Poppins, Chitty Chitty Bang Bang, all but one song from The Jungle Book, Bedknobs and Broomsticks, and The Aristocats. But they are possibly best known for their can’t-get-them-out-of-your-head songs from two Disney theme park attractions: “There’s a Great Big Beautiful Tomorrow” from the Carousel of Progress and “It’s a Small World (After All)” from the attraction of the same name.

But, back to Mary Poppins. First, the song “Feed the Birds” speaks of an old beggar woman who sits on the steps of St. Paul’s Cathedral, selling bags of breadcrumbs to passers-by for tuppence a bag so they can feed the pigeons. The scene is reminiscent of the real-life seed vendors of Trafalgar Square in London. It is intended to be a lesson about charity and the merits of giving to others.

The song was regarded as one of Walt Disney’s favorite songs. Robert Sherman recalled:

“On Fridays, after work, Walt Disney would often invite us into his office and we’d talk about things that were going on at the Studio. After a while, he’d wander to the north window, look out into the distance and just say, ‘Play it.’ And Dick would wander over to the piano and play ‘Feed the Birds’ for him. One time just as Dick was almost finished, under his breath, I heard Walt say, ‘Yep. That’s what it’s all about.’ ”

“A Spoonful of Sugar Helps the Medicine Go Down” is an up-tempo number sung by Julie Andrews as Mary Poppins as she instructs the children, Jane and Michael, to clean their room. Although the task is daunting, she tells them that, with a good attitude, it can be fun. Story has it that Robert Sherman, the primary lyricist of the duo, worked an entire day trying to come up with a song idea for this scene. As he walked in the door at home that evening, his wife, Joyce, informed him that the children had gotten their polio vaccine that day. He asked his son Jeffrey if it hurt, thinking he had received a shot. Jeffrey responded that the medicine was put on a cube of sugar and that he swallowed it. By the next morning, Robert had the title of his song. Richard put a melody to the lyric and the song was born.

Finally, “Supercalifragilisticexpialidocious” is sung by Julie Andrews as Mary Poppins and Dick Van Dyke as Bert the chimney sweep in the live-action film’s unique animated sequence—just after Mary Poppins wins a horse race. Flush with her victory, she is immediately surrounded by reporters who pepper her with leading questions and comment that she is probably at a loss for words. Mary disagrees, suggesting that at least one word is appropriate for the situation—a word to say when you have nothing to say, and that is: Supercalifragilisticexpialidocious!

The Sherman Brothers have given several conflicting explanations for this word’s origin, in one instance claiming to have coined it themselves. But, this was disproven when two other songwriters sued the Walt Disney Company, claiming to have written a song using that word in 1949. The Disney publishers ultimately won the lawsuit because they produced affidavits showing that many variants of the word had been known prior to 1949.

These are just a few of the many memorable songs that enhance the stories in Disney animated and live-action films. Which songs from Disney films are your favorites?