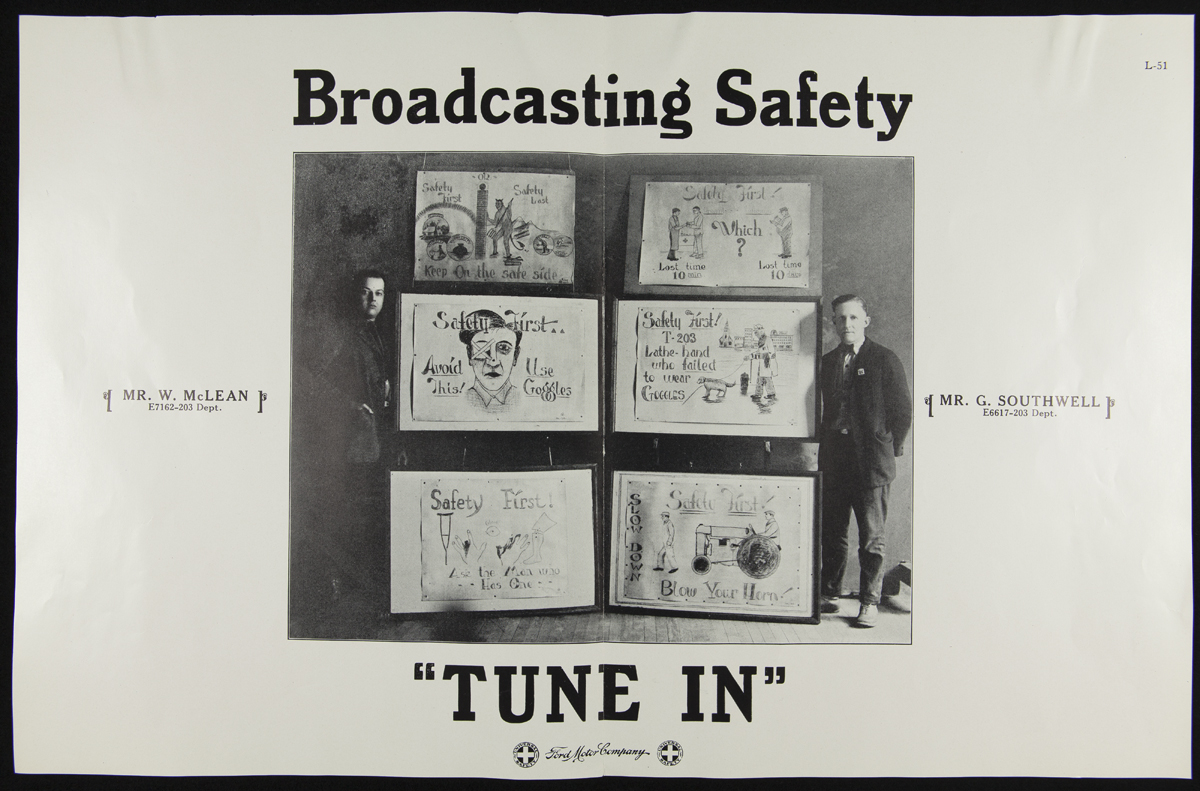 What do Buster Keaton and Harold Lloyd have to do with Ford Motor Company? Well, besides the fact that Ford cars appear in a number of their films), the Ford Motor Company Safety Department. It’s strange to think of these two physical comedians as poster boys of safety, but through weekly films on safety issues the Safety Department used innovative techniques to prevent accidents by showing the right and wrong way of performing jobs and using machines and tools, often using Keaton and Lloyd films as comic examples of unsafe behavior. Safety, however, was taken very seriously at Ford and was seen as so important that early on in the 1910s the role of safety engineering and inspection was removed from the Medical Department and set up as a separate department.

Headed up by Robert Shaw, the department was established in 1914 and was responsible for machine safety, job safety, as well as hygienic safety (the full title of the department was the Safety and Hygiene Department). The first safety committee included P.E. Martin, C.E. Sorensen, C.W. Avery, the minutes stated: “it is the aim of the Safety Committee to reduce the number and serious nature of accidents. The assistance of every Ford man is needed in this work.” And assistance they got. By 1922, the department had around thirty inspectors, some general and some specialists, it also included a bacteriologist who examined areas in the factory to help stop the spread of disease, and a range of cleaners who sanitized, scrubbed, and scoured every inch of the factory to make sure the environment was as germ-free and clean for the workers as a factory could be.

Of the inspectors, some were general, and some specialized in specific areas or machines in the factory. John Wagner, who joined the department in 1922, worked on punch presses and noted when he started workers were losing an average of 16 fingers a month on press punches alone. Wagner designed several guards and safety mechanisms for machines, noting, “we never designed a guard like a pair of handcuffs that would pull men's hands back. I never approved of them. The men resented that type of guard. The sweep guard was not resented.” Shaw also noted that “we never liked harnessing a man to a machine.” Every machine in the factory was inspected and new guards or devices installed as necessary, any new machines had to be approved by the department, and they were consulted when new machines were being designed.

Shaw worked not only to fix machines that caused accidents, but also to heighten awareness of unsafe behavior and correct problems before they caused injury. Weekly safety bulletins were published, posters were posted, articles appeared in the Ford Man, and safety slogans and tips were printed on the back of each man’s timecard. Safety statistics for each department would be compiled monthly and distributed to all the departments for contests with departments competing against each other for the best safety record. The department hosted safety sessions where they showed movies, performed skits, and gave talks designed for individual departments and the safety hazards they faced. Safety rallies, parades, and picnics were hosted at different plants and branches in Detroit with the Ford Motor Company Band entertaining the crowd. 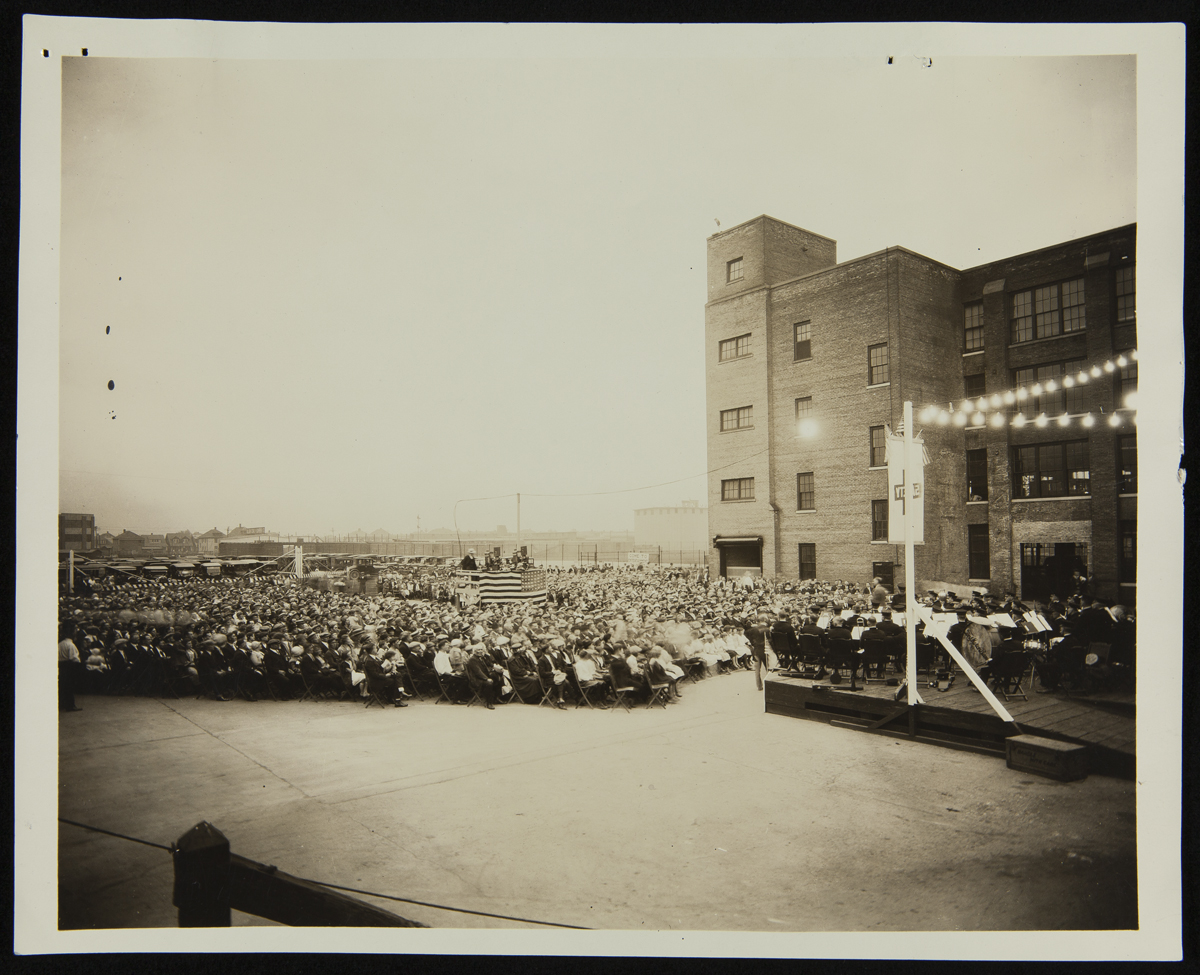 The department created safety cards for each job, which men has to read, sign, and turn in to the foreman who then carried them and used them to coach employees when they didn’t follow safety rules. Each new man was trained in safety procedures for his job before he started and was held accountable for complying with regulations. If a man was caught in violation of a safety regulation, such as running in the factory (with or without scissors), cleaning a machine while it was running, or using mushroom head tools that could catch and pull a man into a machine, they were sent up to the safety office to read through the safety bulletins and look at photos of industrial accidents from the plant. In rare cases of severe violation, a man was suspended, and if even more rarely, they were laid off for repeat safety offenses. 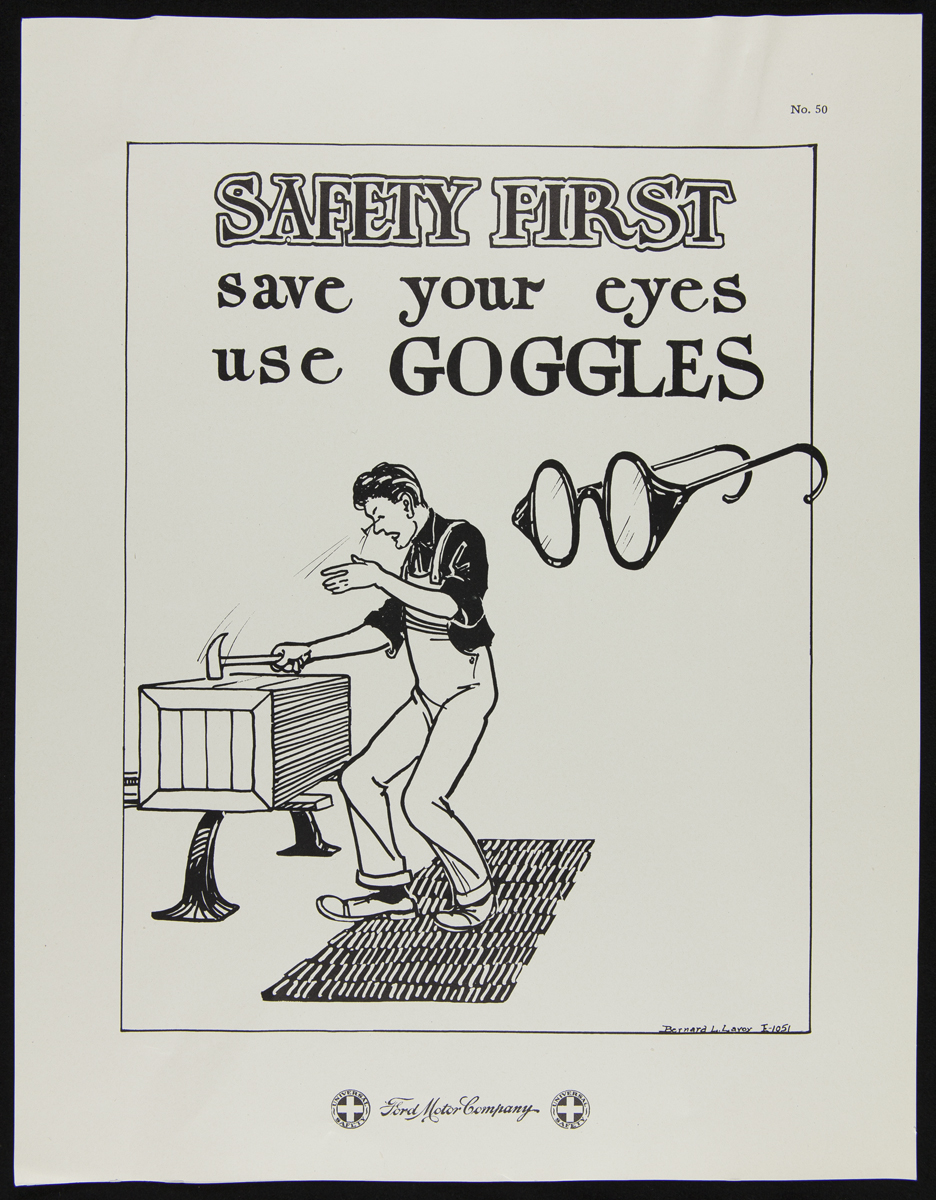 The pamphlet Factory Facts from Ford noted in 1917: “Safety work concerns not only the loss of fingers and injuries of this nature, but undertakes to protect the health of the men as well.” To this end the hygiene side of the department pumped in washed air “at just the right temperature for comfort and efficient work,” provided filtered and cooled water in drinking fountains that were sanitized multiple times a day, placed dust collection systems in dusty work areas, and scrubbed the floors at least once a week, boasting that cleaners swept “even the spaces which the average housewife passes over.”

Shaw extended the Ford safety program outside the company as well and was a founding member of the Detroit Industrial Safety Council. The council was composed of various Detroit area manufacturers and focused on reducing accidents through increased awareness, better machines and guards, and improving factory policies and environment.