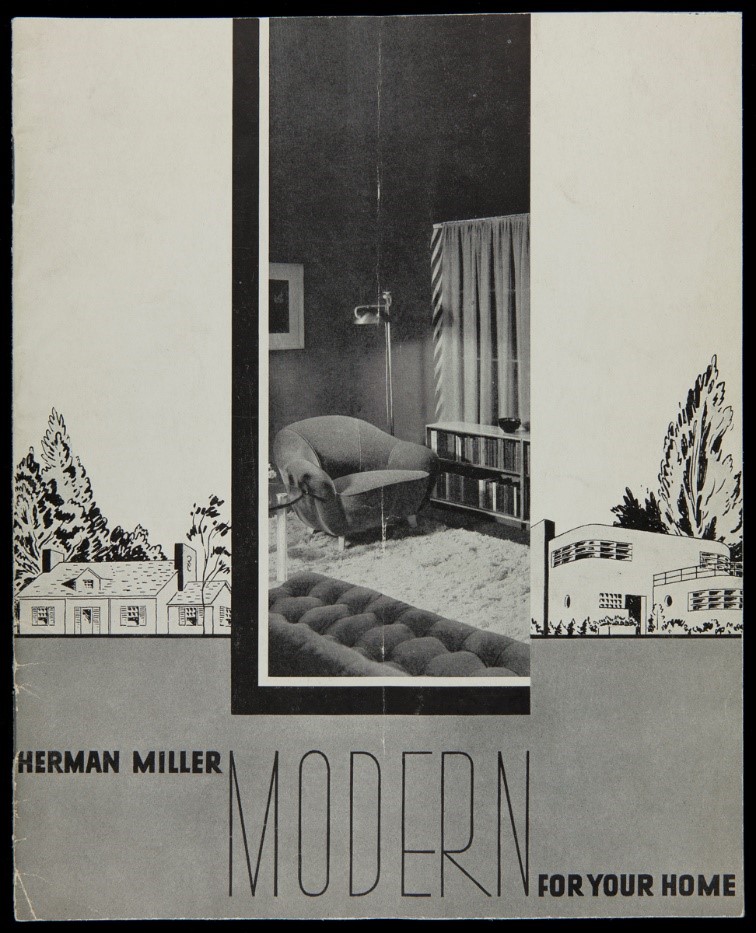 West Michigan is known for its furniture. Furniture factories-turned-apartment or office buildings can be seen throughout Grand Rapids and its surroundings—some with company names like Baker Furniture, John Widdicomb Co., and Sligh Furniture still visible, painted on the brick exterior. While fewer in numbers today than in 1910, West Michigan still boasts numerous major furniture manufacturers. One of these, the Herman Miller Furniture Company in Zeeland, is known around the world for its long history of producing high quality modern furniture—but the Herman Miller name was not always synonymous with “modern.”

A young man named Dirk Jan (D.J.) De Pree began working as a clerk at the Zeeland-based Michigan Star Furniture Company in 1909, after graduating from high school. It was a small company and De Pree excelled, partly due to his appetite for reading books about business, accounting, and efficiency. Just a decade after starting with the company, he was promoted to president. In 1923, De Pree convinced his father-in-law, Herman Miller, to go in with him to purchase the majority of the company’s shares. The furniture company was renamed the Herman Miller Furniture Company in honor of De Pree’s father-in-law’s contribution, although Miller was never involved in its operation. Renamed, rebranded, and under new ownership, D.J. De Pree pushed a new culture of quality and good design that, he hoped, would help the company stand out amongst a competitive and crowded West Michigan furniture industry. 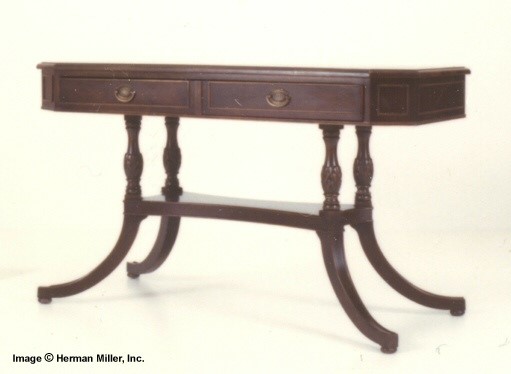 At the time, many West Michigan furniture companies were producing stylistically similar pieces that were essentially reproductions of historic forms, especially Colonial and European Revivals. Most of the manufacturers “designed” furniture by copying from books or authentic vintage furniture found in museums. The best designers were known to be the most faithful copyists. The Herman Miller Furniture Company manufactured primarily reproduction furniture until the early 1930s. Their furniture lines were typically very ornate and sold in large suites—and following in the footsteps of other West Michigan companies, Herman Miller released new lines with each quarterly furniture market, despite the undue pressure this placed upon them.

As the Great Depression crippled industry across America in the late 1920s and early 1930s, the Herman Miller Furniture Company struggled to survive. With bankruptcy on the horizon, D.J. De Pree reflected on the shortcomings of the furniture industry and issues within the company. A devoutly religious man, he also prayed. Whether by divine intervention or regular old coincidence, Gilbert Rohde—a young designer that would leave an indelible mark on the Herman Miller Furniture Company—walked into the company’s Grand Rapids showroom in July of 1930, bringing with him the message of Modernism. 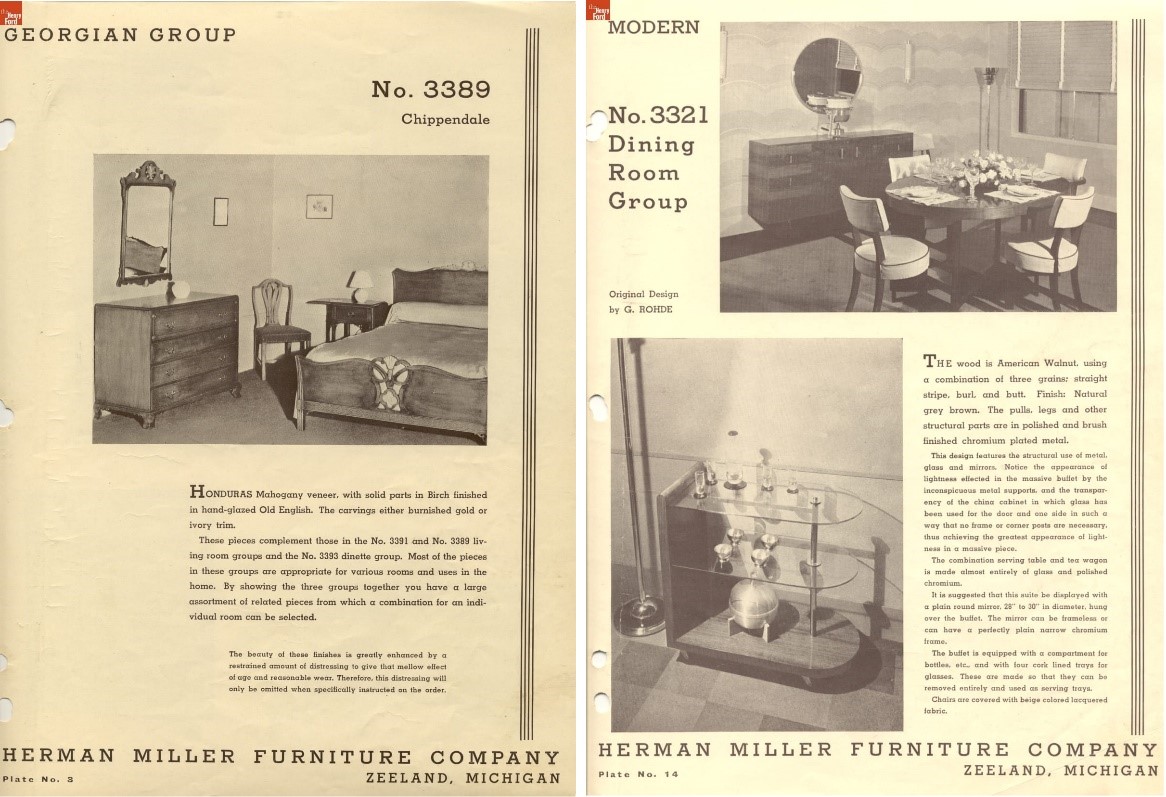 Born in New York City to German immigrants in 1894, Gilbert Rohde (born Gustav Rohde) showed aptitude for drawing at a young age—he claimed to have drawn an identifiable horse by the age of two-years-old! He was admitted to Stuyvesant High School in 1909, which was reserved for gifted young men. There, he designed covers for the school’s literary magazine, won drawing contents, and began to experiment with furniture design. While he had aspirations (and demonstrated aptitude) to become an architect, he began working as an illustrator and later, a commercial artist. He was successful in this venture for years and learned invaluable lessons about advertising and marketing which would help him—and his future clients—tremendously in the years to come. With determination to become a furniture designer, in 1927 Rohde departed on a months-long European tour of sites associated with the modern design movement. Among his stops, he visited the Bauhaus design school in Germany and the Parisian design studios that featured the modernist ideas exhibited in the breakthrough Exposition International des Arts Décoratifs et Industriels Modernes of 1925. Returning to the United States months later, he began designing furniture with a clear European modern influence and soon began to focus on designing mass-produced furniture for industry, namely for the Heywood-Wakefield Company of Massachusetts. 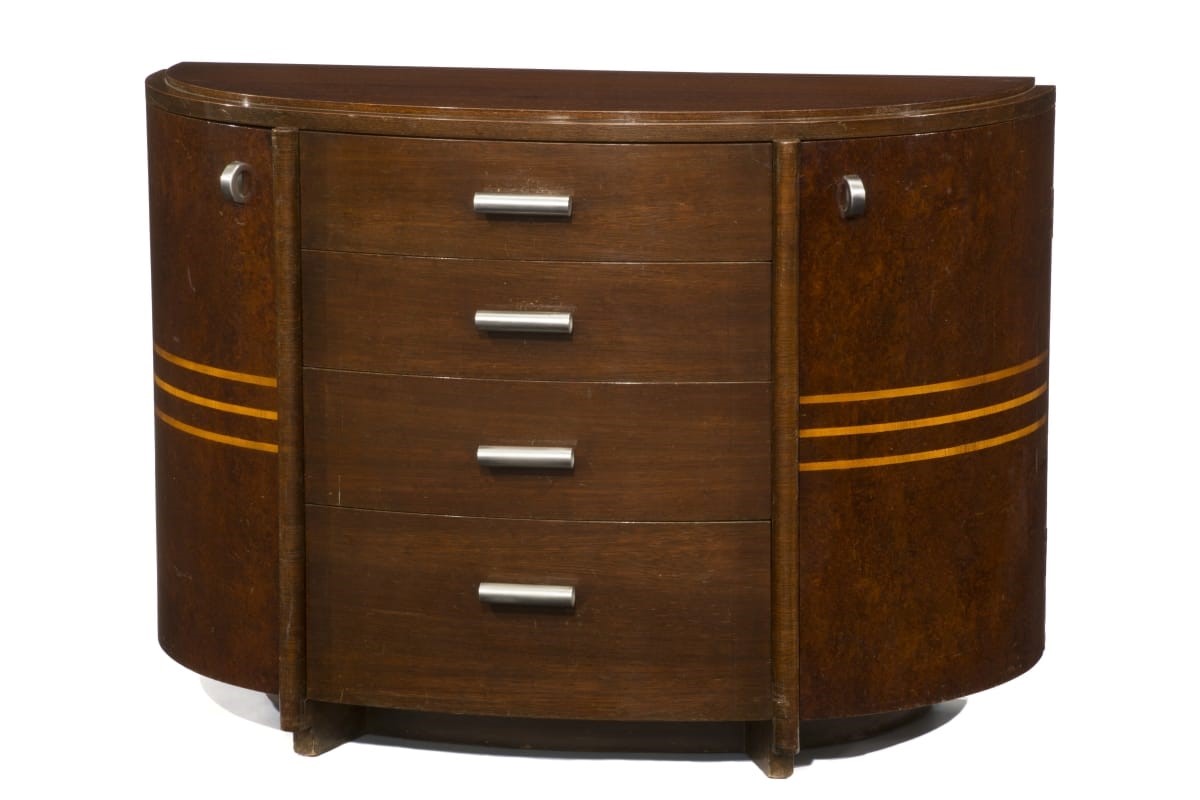 Dresser, 1933-1937 (THF156178). An early example of Rohde-designed furniture manufactured by Herman Miller, this dresser was designed for the 1933 Chicago World’s Fair’s “Design for Living Home.” The house and its furniture garnered broad public acclaim, benefitting the budding Rohde and Herman Miller partnership.

By 1930, Rohde was looking for more clients. He visited the Herman Miller showroom in Grand Rapids, Michigan—at the end of a long day of denials by other manufacturers—and met D.J. De Pree. Rohde argued that modern furniture was the future and told him, “I know how people live and I know how they are going to live.” This confidence, despite few years of actual furniture design, convinced De Pree to give Rohde a chance at designing a line for Herman Miller. Further, Rohde was willing to work on a royalty arrangement with a small consultation fee instead of all cash up front. In combination with Herman Miller’s already-precarious financial situation, these factors helped to offset some of the risk in producing this forward-thinking furniture. Herman Miller began selling Rohde’s first design, an unadorned, modern bedroom suite in 1932, but still played it safe by continuing to sell historic revival lines alongside Rohde’s modern furniture. As design historian Ralph Caplan notes, in those early years, Herman Miller was “like a company unsure of what it wanted to be when it grew up.”  But Rohde’s furniture sold. By the early 1940s, Rohde’s modern lines made up the vast majority of Herman Miller’s output.

Left: Coffee Table, 1940-1942 (THF35998), Right: Rohde Sideboard, 1941-1942 (THF83268). Gilbert Rohde admired the Surrealist Art Movement. In his early 1940s Paldao Group, the forms and materials pay homage to the work of the Surrealists—and were the first biomorphic forms used in furniture manufactured in the United States.

Tragically, Rohde’s tenure at Herman Miller was cut short by his untimely death at the age of 50 in 1944, but his impact is lasting. Rohde’s emphasis on simplicity and functionality of design meant the materials and the manufacturing had to be of the highest quality—this honesty of design and emphasis on quality appealed to De Pree’s Christian values. It remains a hallmark of Herman Miller’s furniture to this day and undoubtedly contributed to the longevity of Rohde’s furniture sales. Sales of Rohde’s furniture did not slow the season after it was introduced, like many of the historic reproductions. The Laurel Line, Rohde’s first coordinated living, dining, and sleeping group, remained in production almost his entire tenure with Herman Miller. D.J. De Pree recounted that his lines often sold for 5-10 years instead of the 1-3 that was typical of the historic reproduction styles. Rohde’s design work for Herman Miller extended far beyond furniture and into advertising, catalogues, and showrooms, and he advised on the manufacture of his furniture too. This expansion of the designer’s role and the creative freedom allowed by D.J. De Pree came to define Herman Miller’s relationship with designers and then the company itself. 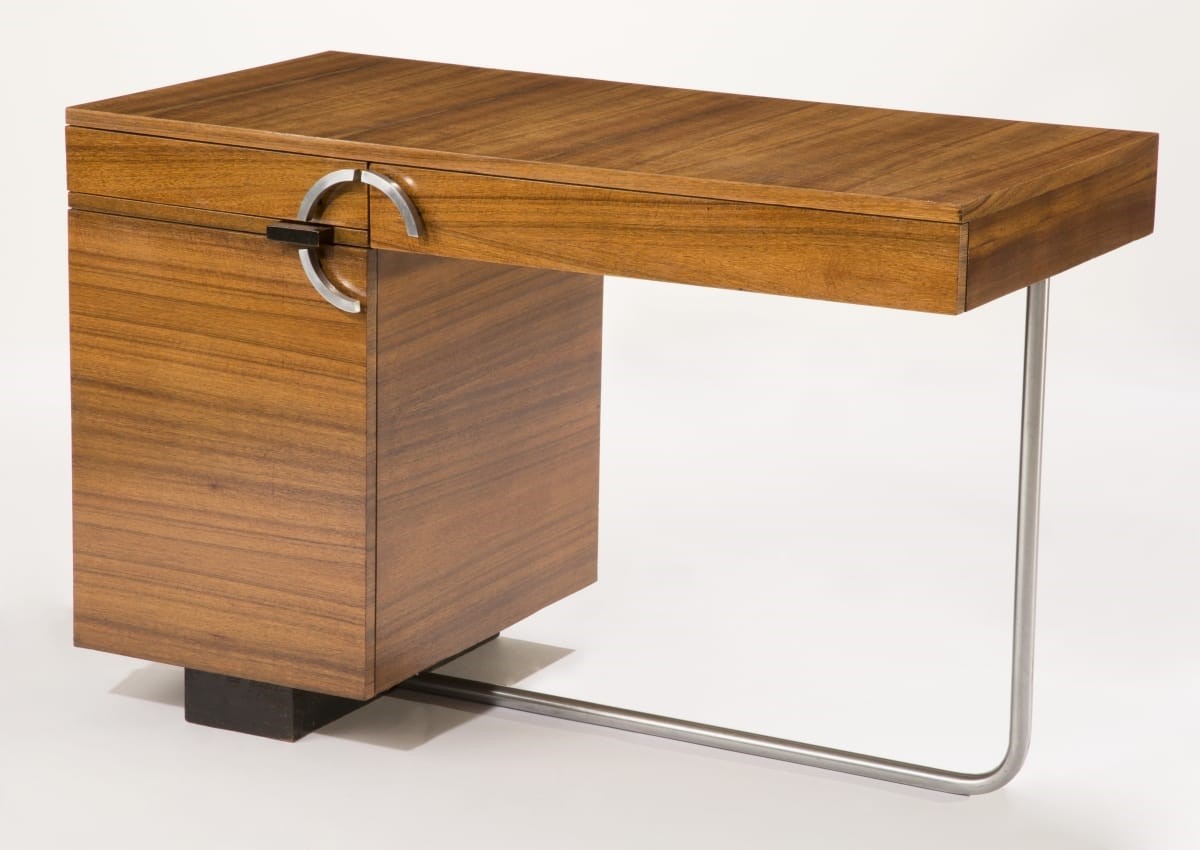 Rohde Modular Desk, 1934-1941 (THF159907). This Laurel Group desk was part of one of Rohde’s early—and most successful—lines for Herman Miller. It was part of a coordinated modular line, which meant that new pieces would be added regularly over years. This was in opposition to the new lines for each quarterly furniture market approach that D.J. De Pree counted as an “evil” of the furniture industry. 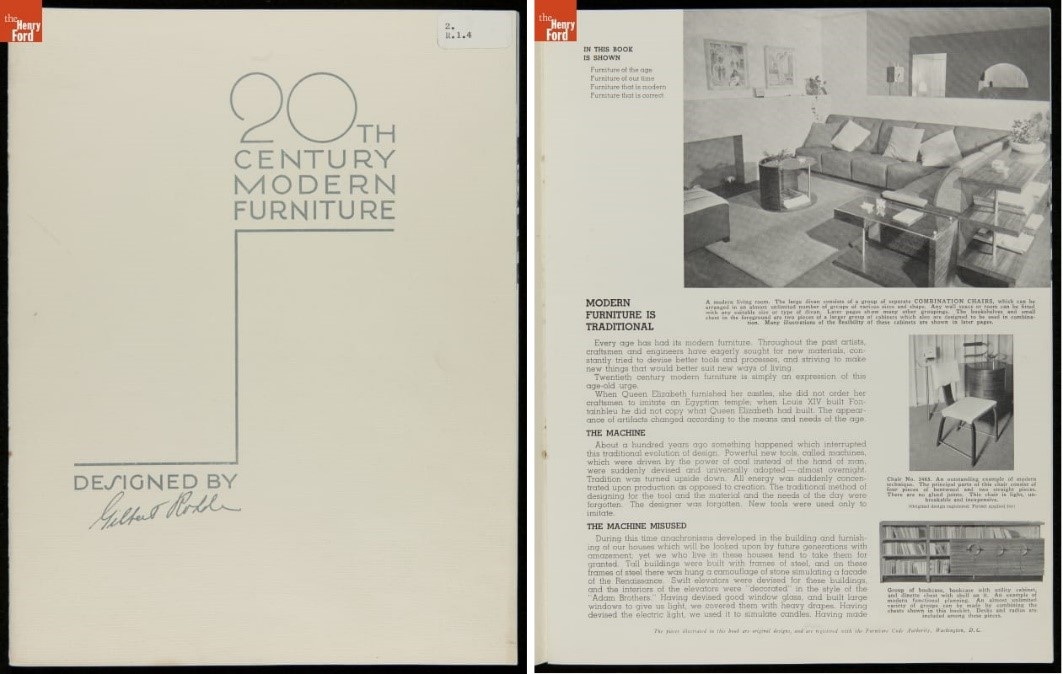 Cover and interior page from Catalog for Herman Miller Furniture, "20th Century Modern Furniture Designed by Gilbert Rohde," 1934 (left: THF229409, right: THF229411). Gilbert Rohde expanded the role of the designer during his tenure at Herman Miller. In this 1934 catalogue, he was educator as well as designer, explaining to the consumer that “Every age has had its modern furniture…When Queen Elizabeth furnished her castles, she did not order her craftsmen to imitate an Egyptian temple…”

Gilbert Rohde and D.J. De Pree transformed the Herman Miller Furniture Company—from one manufacturing reproductions at the brink of bankruptcy, to one revolutionizing the world of modern furniture. George Nelson, Charles and Ray Eames, Isamu Noguchi, Alexander Girard and countless others were able to make incredible leaps in the name of modernism, largely due to the culture and partnership developed by Gilbert Rohde and D.J. De Pree. In George Nelson’s words, “we really stood on Rohde’s shoulders.”