The website for Baltimore’s Pimlico Race Course, home of the Preakness Stakes, notes that its 1870 founding makes Pimlico the second-oldest race track in the United States today, after Saratoga. / THF239341

Horse racing was America’s first popular spectator sport, dating back to colonial days. The fashionable standards and sporting traditions established by wealthy Southern planters influenced the future acceptance and organization of many American sports. Further, of the wide variety of sporting diversions in which they engaged, horse racing was the most popular. Subscription races were held in larger towns in Virginia and South Carolina (sponsored by the gentry, but spectators came from every class), while quarter-races (informal quarter-mile matches) were a universal feature of Southern country life at the time.

The Southern planters’ enthusiasm for horse racing in the mid-17th century was soon matched by that of the wealthy gentry living along the Eastern Seaboard. The popularity of horse racing in the East, especially the spontaneous quarter-races between neighboring settlers’ horses, also spread rapidly to the frontier. By 1788, a circular race track had been constructed as far west as Lexington, Kentucky. English thoroughbreds were imported in large numbers during this time, establishing new and dominant bloodlines. Heavy betting accompanied these races, which is why horse racing was widely prohibited in many areas until well into the 19th century. 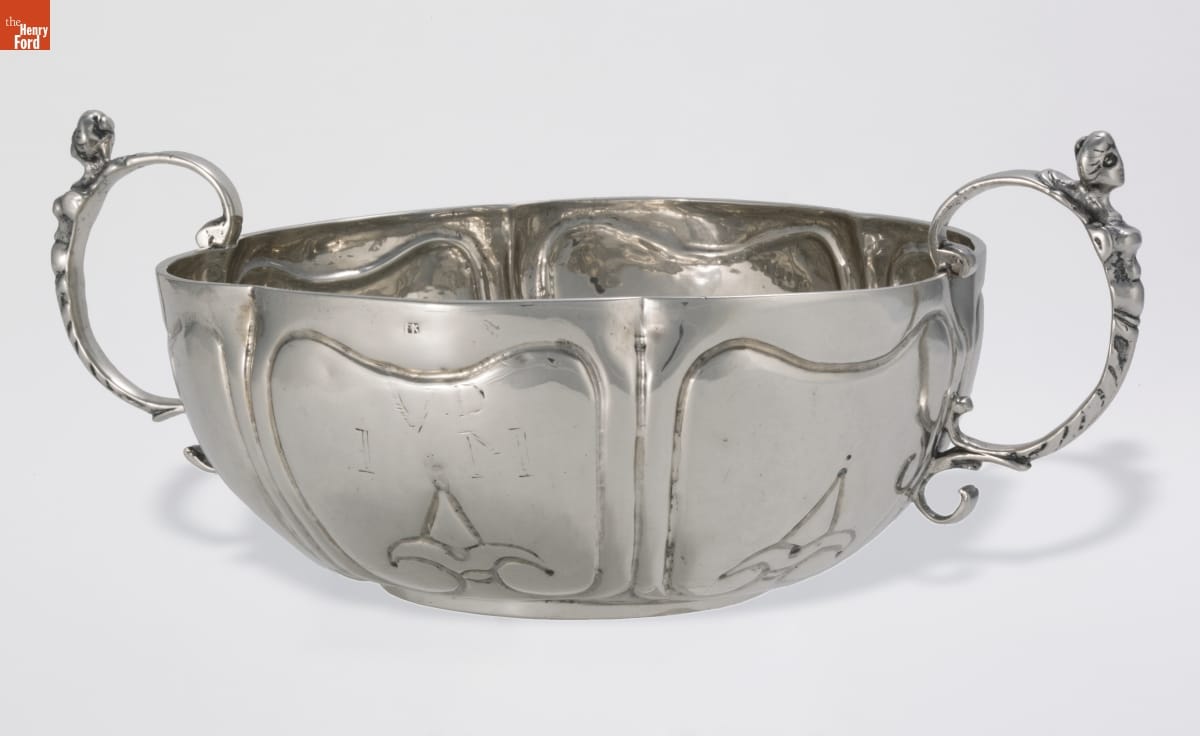 Engraved on one side of this cup, dating to 1699, are the initials of Jacob and Mary Van Dorn of Middletown, New Jersey. Family tradition claims that the cup was won by one of their slaves, racing a colt in a one-mile race. If true, this is the earliest unaltered American racing trophy. / THF159561

People working and living in the growing cities craved diversion. In the 1820s, highly organized horse-racing meets took place in cities as new courses and larger grandstands were built for paying customers. Rules were standardized, schedules published, and racing times recorded. Early sporting periodicals—including the most popular of this era, The Spirit of the Times—spurred the growing enthusiasm. Although betting continued, horse racing had achieved some degree of respectability by the 1850s. It flourished in all parts of the country (except New England) and was especially popular in the South, the West, and on Long Island in New York State. Horse racing also became a major feature of agricultural fairs, to the annoyance of those who had supported the earlier, noncommercial character of these events. 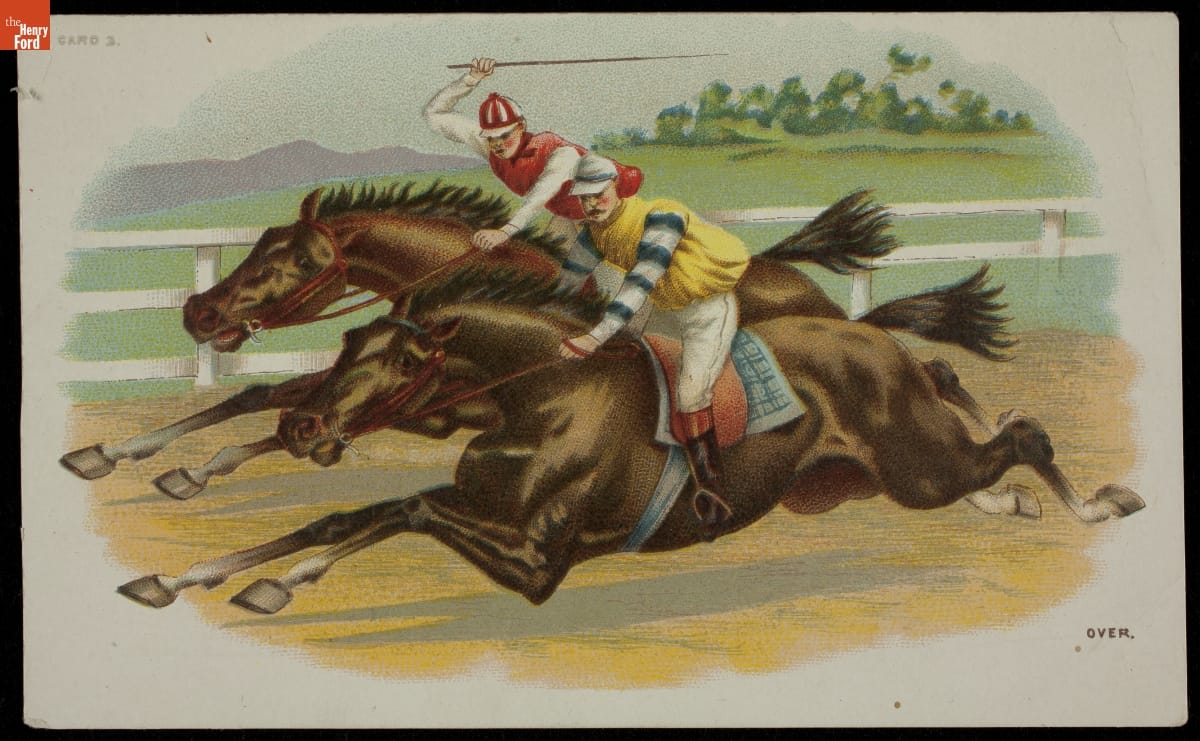 The front of this trade card for "The Big Fair" in New Castle, Indiana, in August 1890 depicts a horse race, while the reverse promises “the fastest races.” / THF225118

During the mid-19th century, the distinctive American sport of trotting (also called harness racing) largely replaced thoroughbred racing at fairs. This sport gained popular support because of its “democratic” nature—a trotting horse with a rig was far less expensive to buy, train, and maintain than a thoroughbred racehorse. It was considered “common to all … open to every one who keeps a horse for his own driving … the butcher, the baker, or the farmer,” and was “the people’s sport, the people’s pastime” (Frank Forester’s Horse and Horsemanship of the United States and British Provinces of North America, 1857). 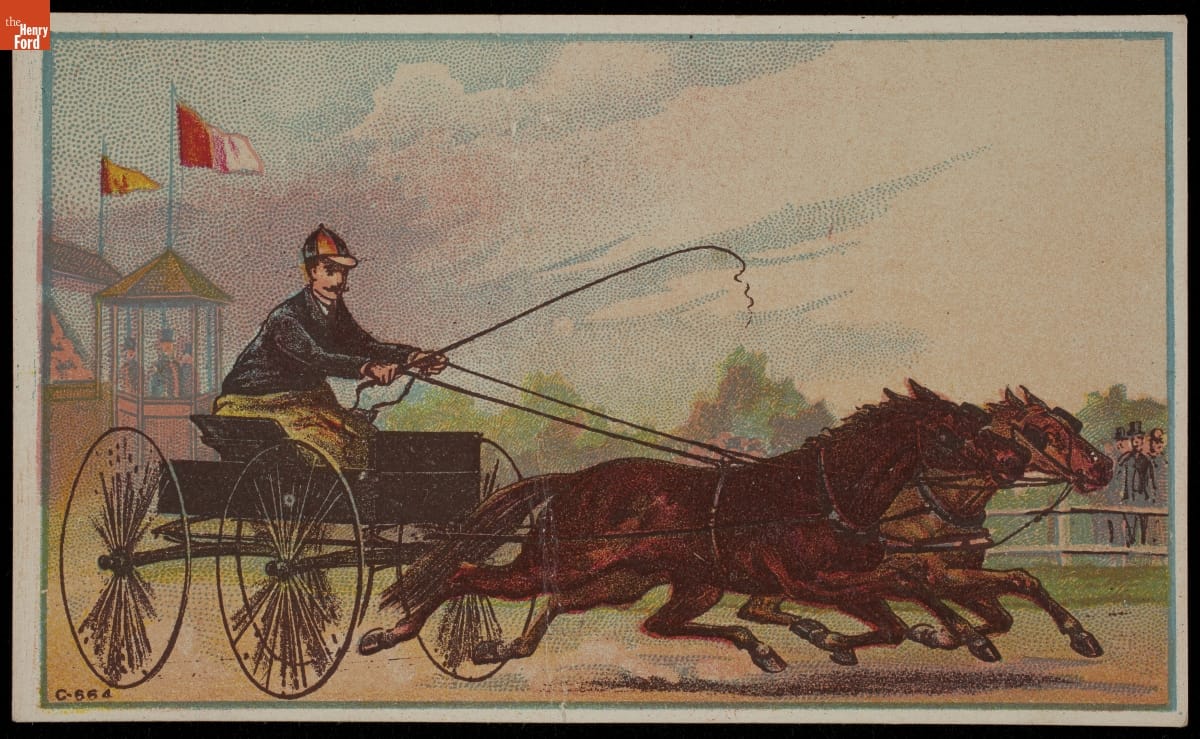 This circa 1891 trade card for a Detroit carriage and buggy manufacturer shows a harness racer on the track. / THF225366

Moreover, many people considered harness racing more respectable than thoroughbred racing since it was not as closely associated with gambling. Thousands upon thousands who cared not a whit for running horses were eager spectators of trotting matches—it fascinated a wide general public, and commercialized trotting races became thoroughly entrenched features of county and state fairs. A National Trotting Association, formed in the 1870s, brought uniform rules, national contests, and the publication of statistics and records.

From 1905 to 1909, undefeated trotting horse Dan Patch became a national celebrity, with a speed so fast that other owners refused to race their horses against him. Dan Patch’s fame subsequently led to his appearance in endorsements of numerous products, including toys, cigars, washing machines, and automobiles. It was decades before his record was broken. 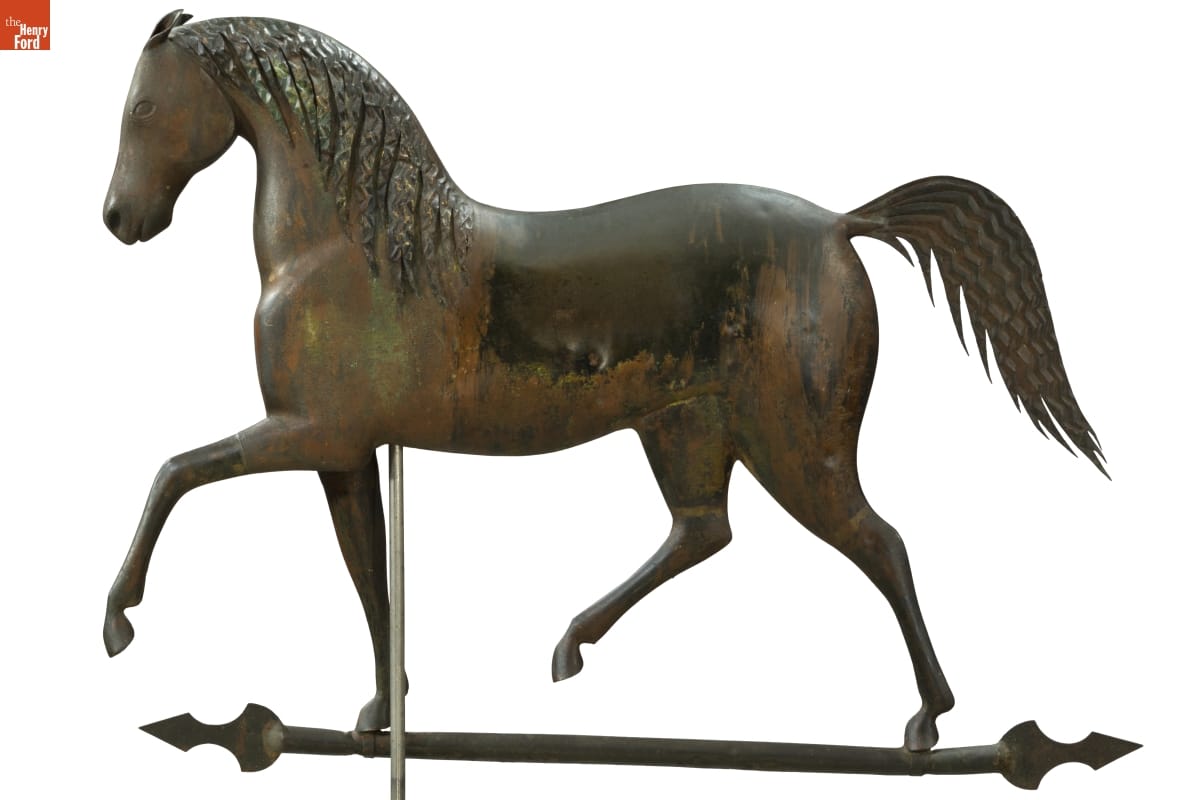 Race horses often became celebrities in their own right—like Lady Suffolk, depicted on this mid-19th century weathervane from our collection, as well as in prints. / THF186729

Harness racing remained a popular spectator sport at county fairgrounds and at specially lit race tracks that made night racing possible. Meanwhile, horse racing remained popular with both the wealthy and the gambling “sporting fraternity.” The number of metropolitan courses increased, and races were highly organized. The Kentucky Derby, first held in 1875, gave national prestige to thoroughbred racing and encouraged the construction of race tracks across the country.

Leisure offers an exceptional opportunity for the display of wealth and the assertion of social importance. Horses were expensive, and some of the great industrialist fortunes of the post–Civil War years went into breeding thoroughbreds for racing. Especially during the 1880s and 1890s, the wealthy joined exclusive country clubs where they might attend horse races at ultrafashionable courses, play polo, or go fox hunting in the English manner. The first of these social spots is believed to be the Brookline Country Club, near Boston, but it was soon followed by the Westchester, Essex, Tuxedo, Philadelphia, Meadowbrook, and Chicago clubs. 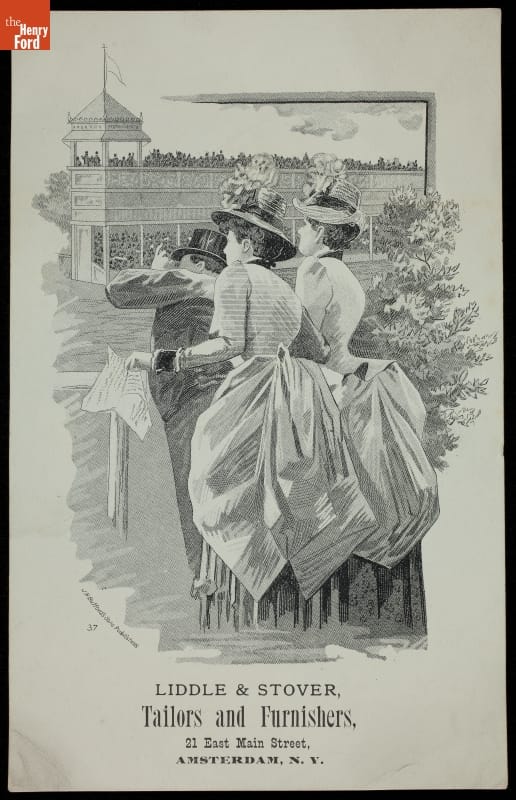 During the 1930s, the hope of great fortunes combined with the publicity surrounding colorful thoroughbreds (like Seabiscuit) and new technical advances (like automatic gates and electric timers) to help revive the sport of horse racing at rebuilt and new courses. Horse racing and harness racing continue to be popular spectator sports today. 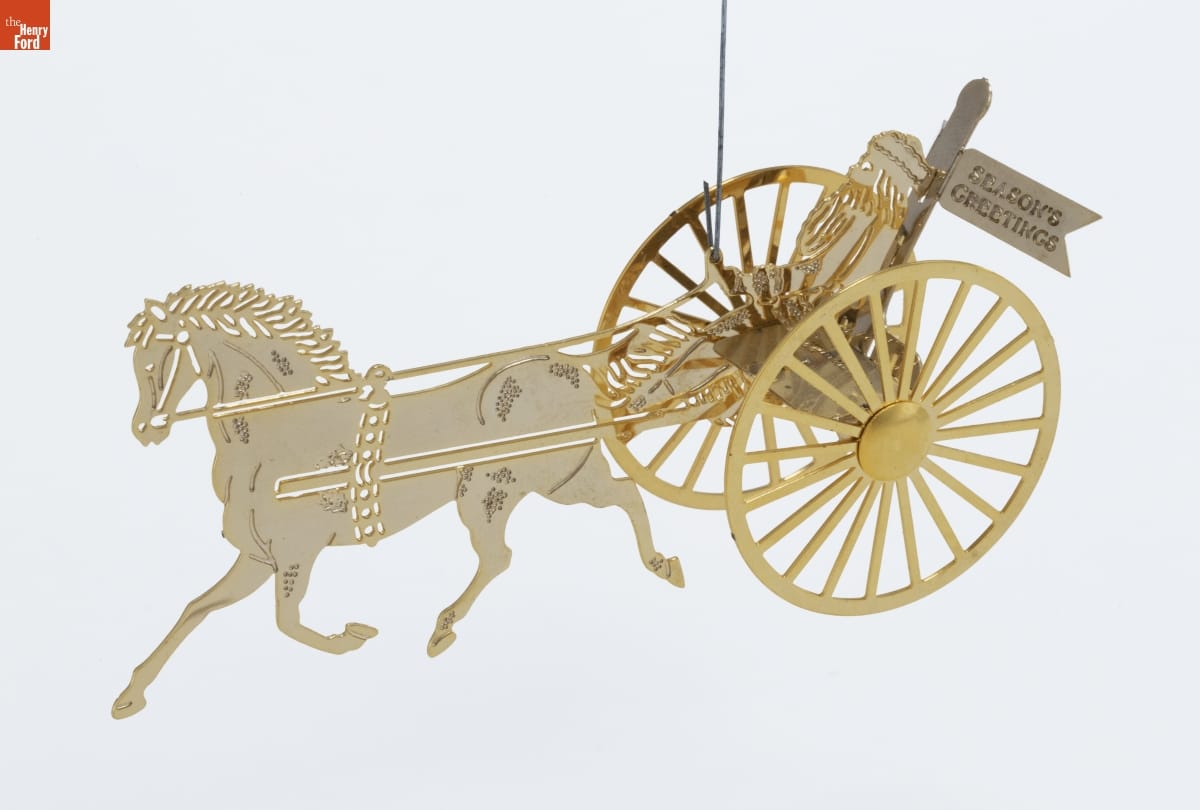 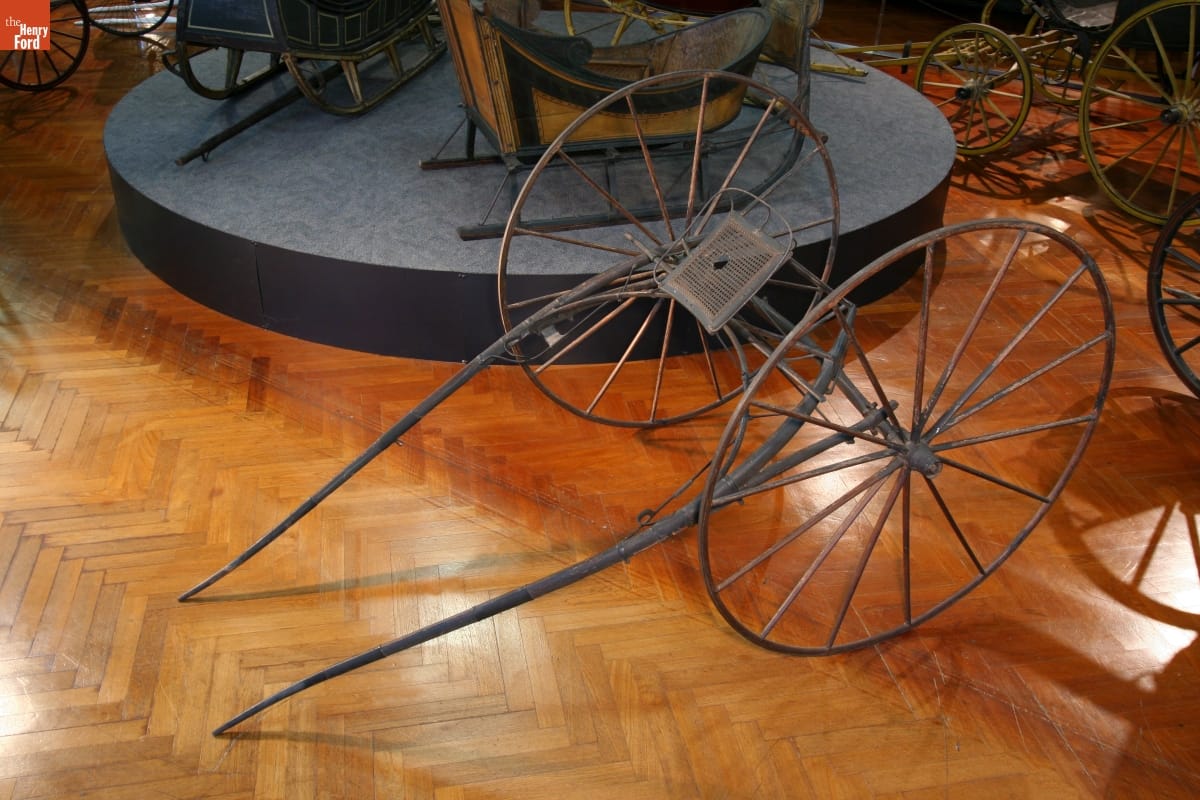 This sulky was used for trotting. It was reportedly used by harness racehorse Guy Wilkes and brought to California in the 1880s. High-wheeled sulkies were lightweight, strong, and efficient, allowing the racehorse to move as swiftly as possible. 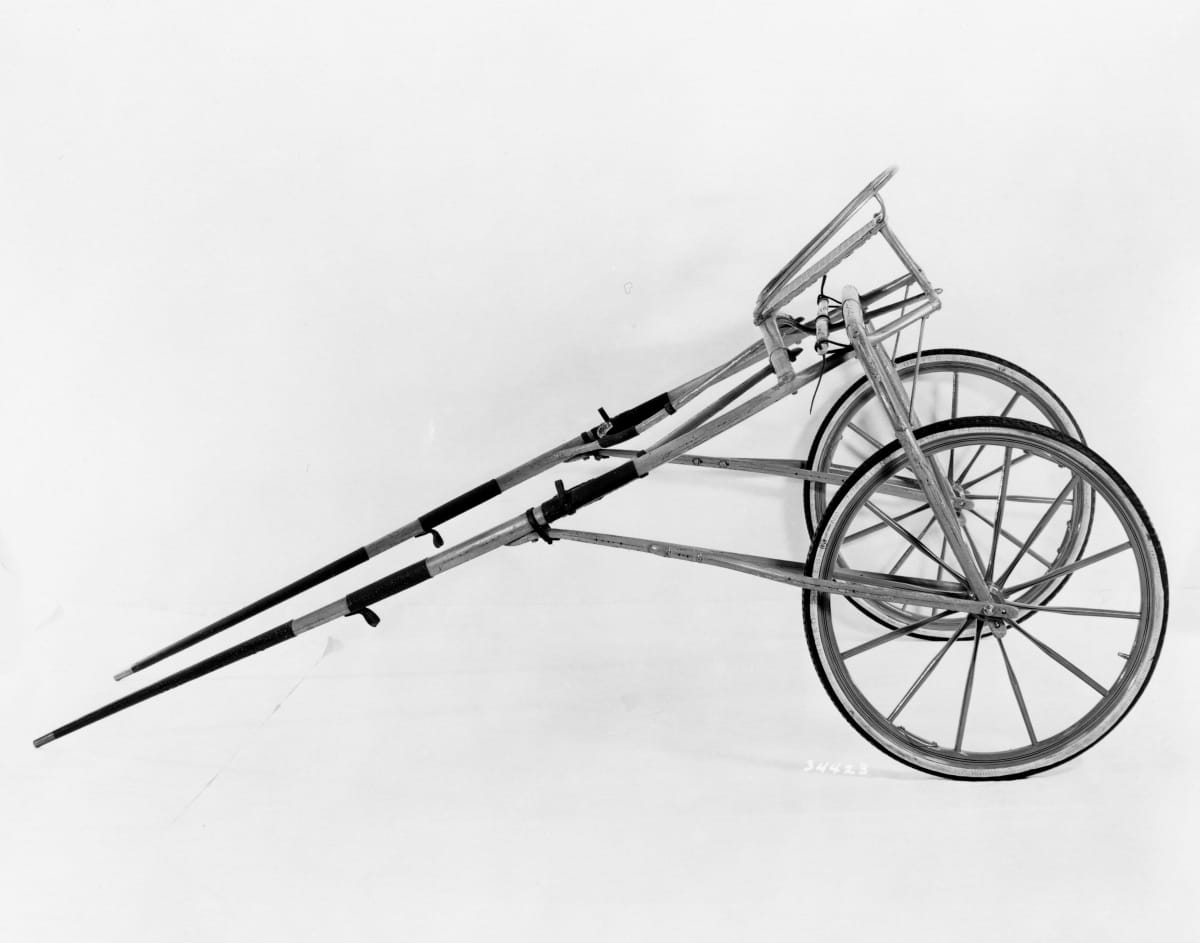 This sulky was used for trotting and was made by A. Bedford of Coldwater, Michigan. The low-wheeled sulky, introduced in 1892 by the Massachusetts bicycle factory of Sterling Elliott, created a revolution in the sport of harness racing. The low wheels and pneumatic tires reduced friction, especially around turns, and enabled horses to improve their speed dramatically. These sulkies were also lightweight, to help the horses increase their speed around the track. 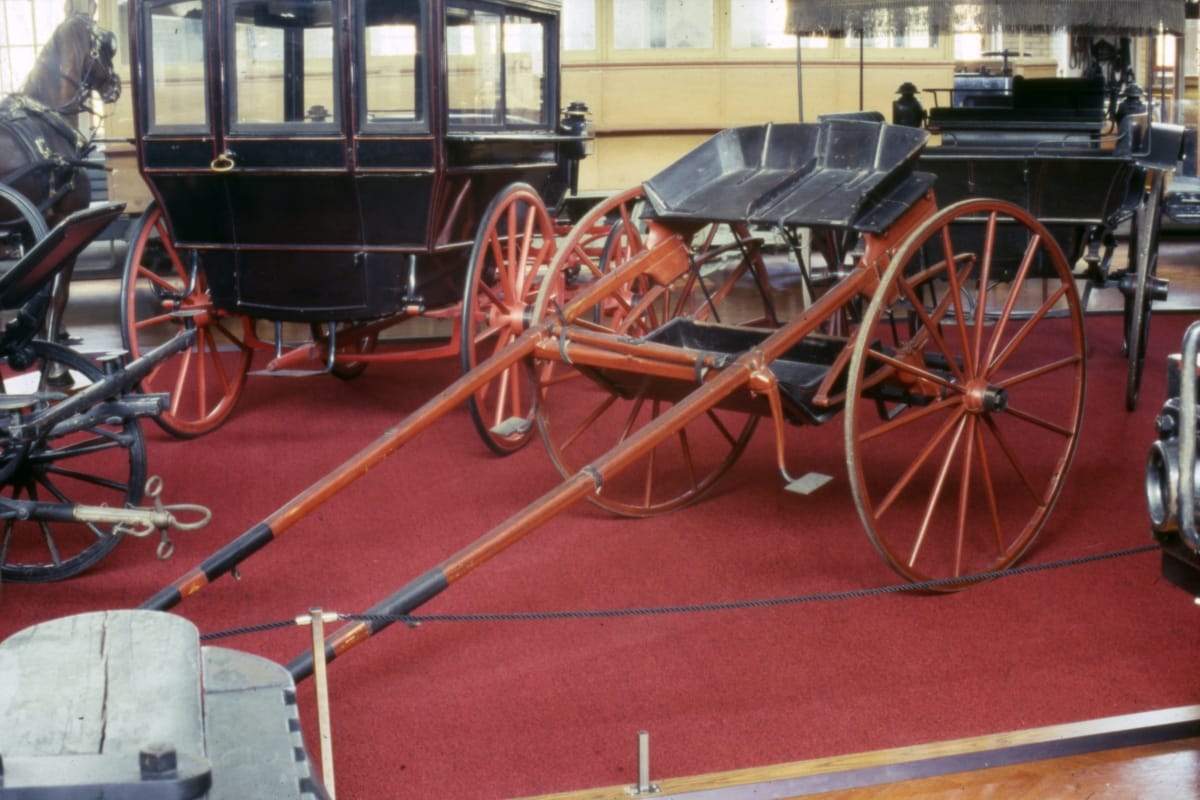 U.S. Senator Leland Stanford (who helped build the Central Pacific Railroad and was also governor of California) trained and exercised two of his finest trotting horses, Sunol and Palo Alto, with this breaking cart. At his 11,000-acre ranch in Palo Alto, California, Stanford developed original methods of training horses that were later adopted by other breeders. By the mid-1880s, he had achieved recognition as the foremost trotting-horse breeder in America. The speed of his two- and three-year-old horses startled the world of harness racing. 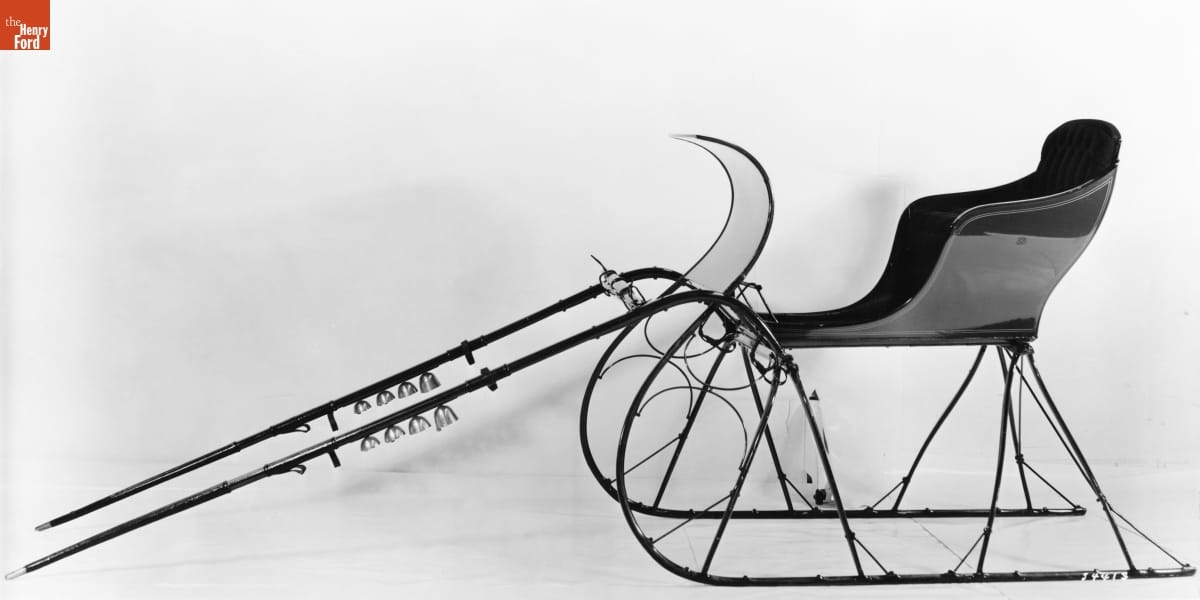 This speeding cutter was made by A. E. Perren of Buffalo, New York. Speeding cutters (sleighs) were hitched to trotters and pacers for horse-racing enthusiasts who found winter no obstacle to their activities. This cutter was used by Everett L. Smith of Westborough Massachusetts, for trotting races, then by Frank P. Knowles, who built a private track at his cattle farm in Auburn, Massachusetts, upon his retirement from his position as vice president at Crompton & Knowles Loom Works.