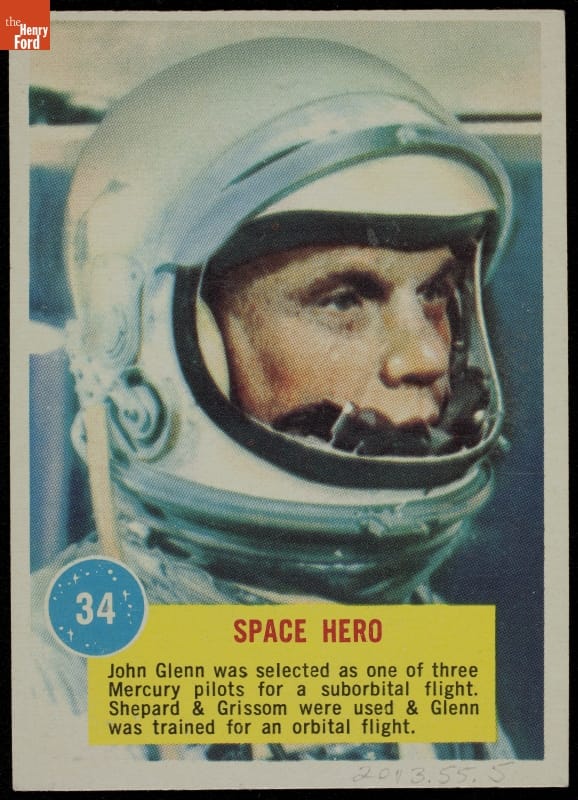 Today, we tend to equate Topps bubble-gum cards with sports heroes, especially baseball players. But, in 1963, a special Topps card series paid tribute to a very different kind of hero—the astronaut. And no astronaut featured in this special card pack was more celebrated at the time than John Glenn.

The Space Race had begun in the late 1950s, when both the United States and the Soviet Union had attempted to launch ballistic missiles into outer space. Americans were surprised when the Russians beat them to it, launching the Sputnik I satellite in October 1957. But, when Soviet cosmonaut Yuri Gagarin orbited earth on April 12, 1961, Americans were downright shocked and not a little concerned. As a response, President Kennedy pledged to support an even more aggressive space program than President Eisenhower had initiated before him. Of course, Congress had to approve a massive budget increase for the newly created civilian space agency NASA (National Aeronautics and Space Administration) to turn President Kennedy’s vision into a reality. 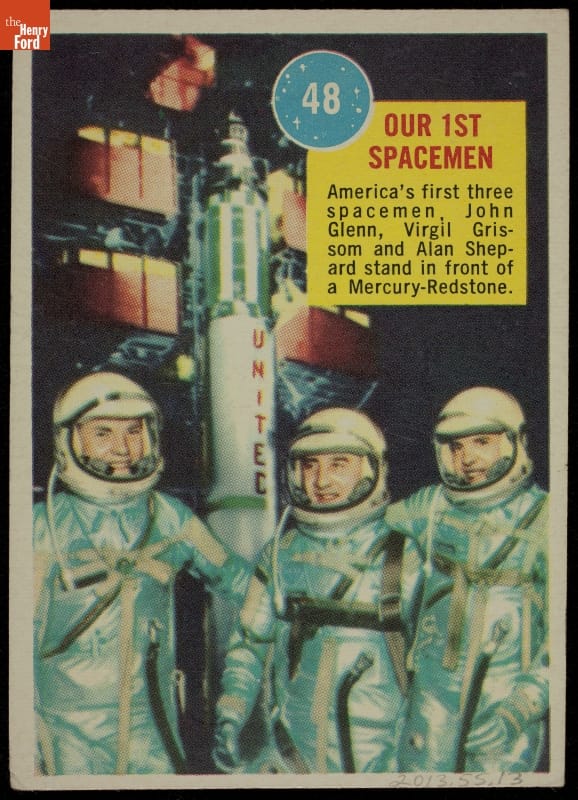 On May 5, 1961, Americans breathed a sigh of relief as astronaut Alan Shepard finally became the first American in space. Two months later, astronaut Virgil “Gus” Grissom followed him with a second suborbital flight (a trip into space but not into orbit). Following up on these and other iterative achievements of Project Mercury, astronaut John Glenn became the first American to orbit the earth on February 20, 1962.  Americans held their collective breath as they followed the mission on radio and television, then celebrated like never before. President Kennedy called Glenn’s flight “a magnificent achievement.” 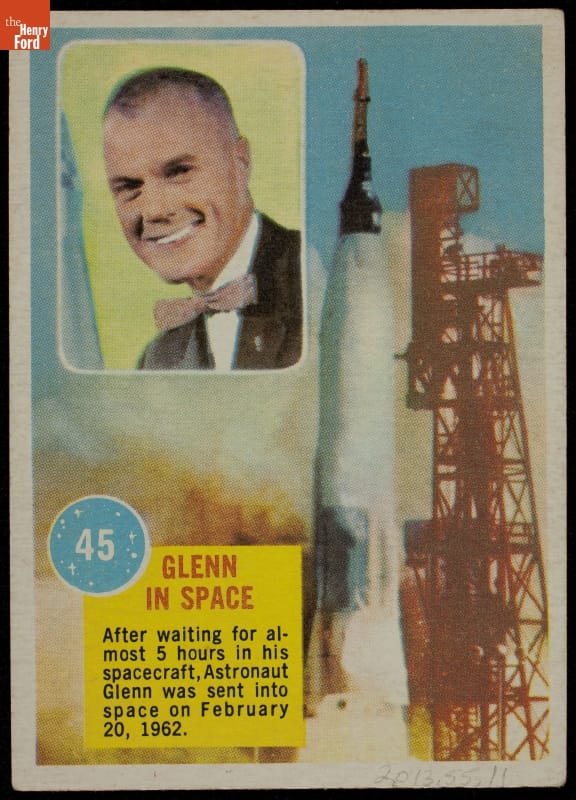 I was nine years old at the time and witnessed John Glenn’s takeoff that day on a fuzzy little black-and-white TV in our school gymnasium. Watching with my teachers and classmates, I felt a great sense of pride—perhaps doubly so because Glenn hailed from my home state of Ohio. 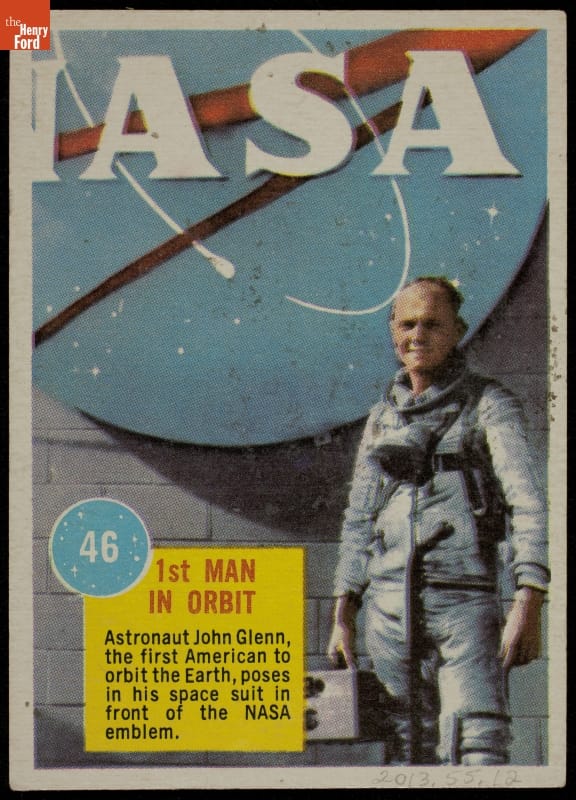 When John Glenn passed away on December 8, 2016, he was the last survivor of the so-called Mercury 7—those seven courageous but well-trained pilots-turned-astronauts who ventured into outer space for their country during America’s nascent Space Program. Glenn will be remembered for his easy smile, his unassuming manner, his sense of duty, and his extraordinary bravery. He renewed American confidence when it was badly shaken during the Cold War era. After he safely landed, he received a hero’s welcome like no other. And he continued to be revered through his 25 years as a U.S. Senator from Ohio, and when he returned to outer space in 1998, as part of the crew on the Space Shuttle Discovery. 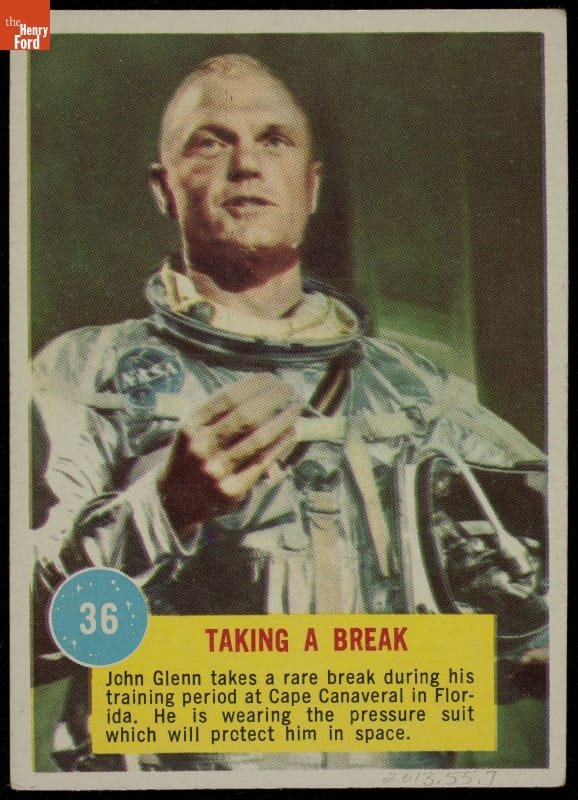 John Glenn struck us as just an ordinary guy, but one who possessed both an extraordinary sense of responsibility and nerves of steel. Through the images on these Topps bubble-gum cards, Glenn seems to be speaking to us across the decades, encouraging us to never stop following our dreams because sometimes the highly improbable actually becomes possible! 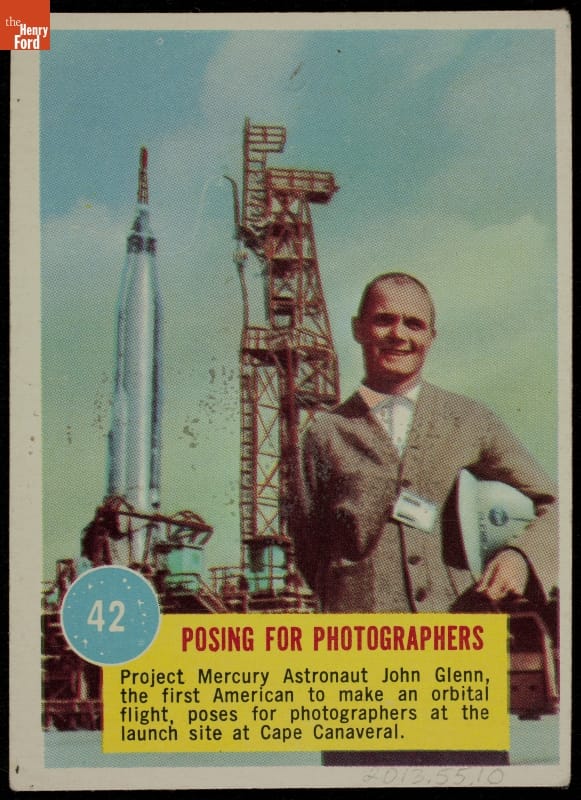 To repeat the well wishes of fellow astronaut Scott Carpenter when Glenn lifted off into the unknown from his Cape Canaveral launch pad in 1962, “Godspeed, John Glenn!”


Donna R. Braden is Curator of Public Life at The Henry Ford.