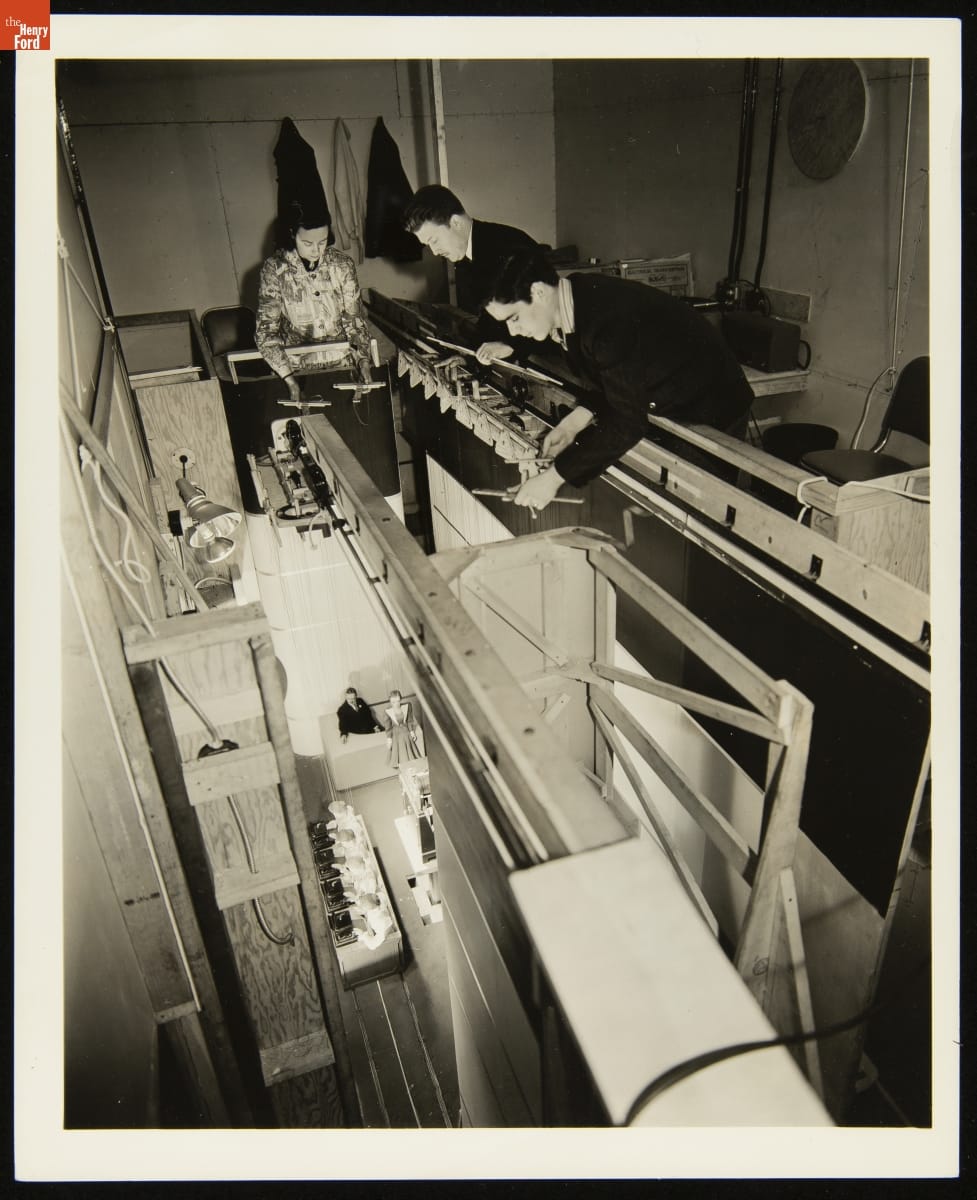 Operating the Marionettes in Writer’s Cramp: A Review in Little Marionette Show at the A.B. Dick Company Exhibit at the New York World’s Fair, 1939 / THF623950

The A.B. Dick Company, a major copy machine and office supply manufacturer, wanted to draw a crowd to its 1939 New York World’s Fair exhibition. The company decided that a musical marionette show, Writer’s Cramp: A Review in Little, was just the ticket. A.B. Dick selected Tatterman Marionettes, a high-quality touring company managed by Edward H. Mabley (1906–1986) and William Duncan (1902–1978). Mabley wrote the musical comedy and Duncan produced the show, staged at the entrance to the A.B. Dick display in the Business Systems and Insurance Building. 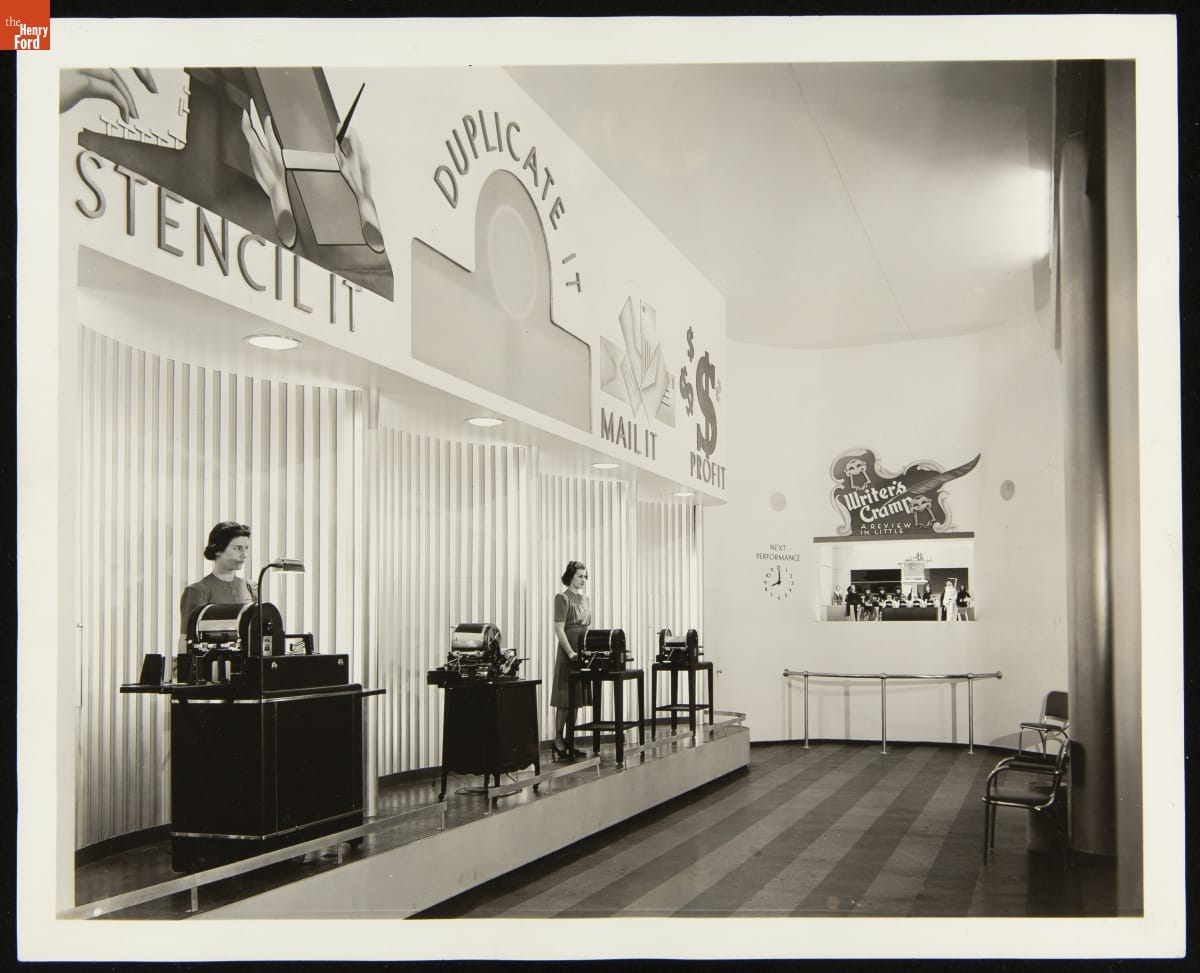 Writer’s Cramp featured changes in communication technology from “the days of the cave man” to the efficient modern office mimeograph machine. Marionettes represented Miss Jones, the secretary, and Mr. Whalen, the executive, trying to rush distribution of important correspondence. Father Time helped inform Mr. Whalen of his good fortune at present (1939) by escorting him through millennia of changes, starting with Stone Age stenographers, and including tombstone cutting, monks with their quill pens, and typists with their typewriters. The play culminated with the unveiling of A.B. Dick Company’s Model 100 Mimeograph, “the World’s Fairest writing machine!” 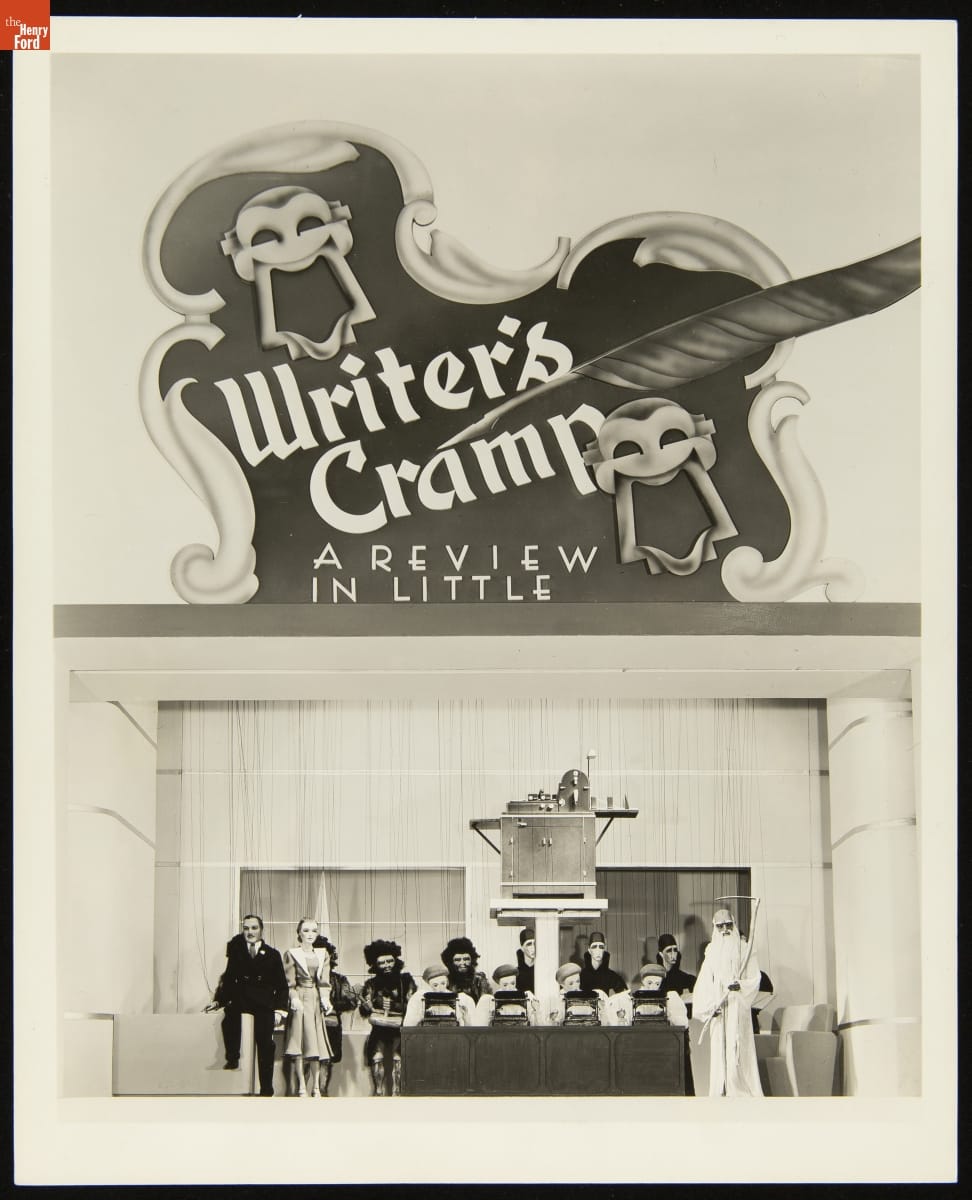 Mabley and Duncan organized Tatterman Marionettes in Detroit, Michigan, in 1922, and had relocated to Cleveland, Ohio, by 1930. They established a reputation through high-quality performances to a range of audiences. 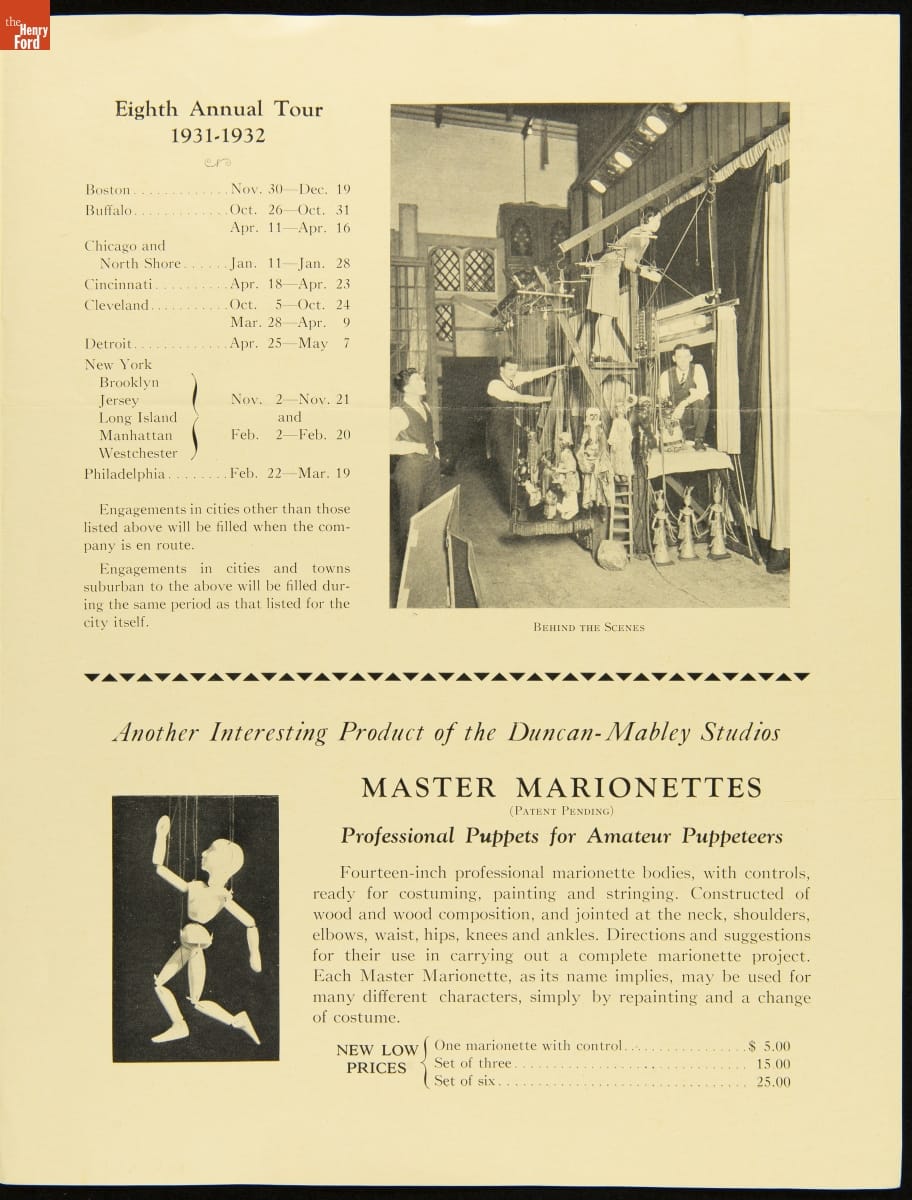 Edsel B. Ford contracted with the company to perform for children in his home during March 1931. At that time, the always entrepreneurial Mabley recommended his and Duncan’s product, Master Marionettes, as “unusual gift favors” for the children attending that show. 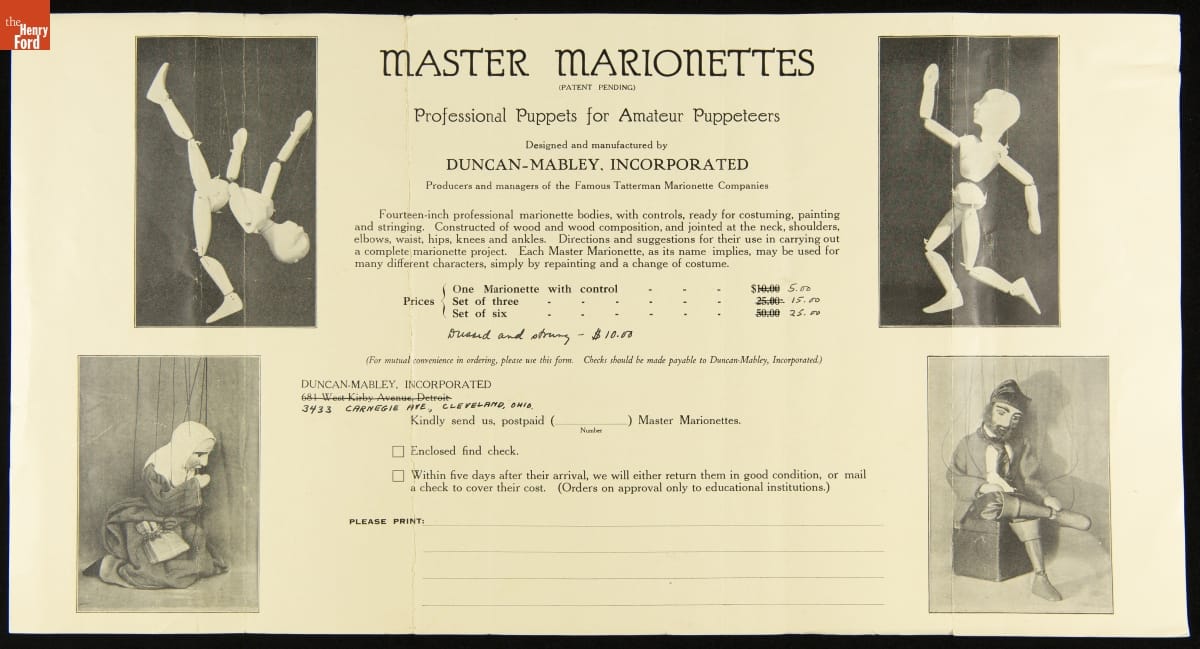 The A.B. Dick Company spared no expense to ensure a first-class production. Tatterman provided the marionettes and experienced operators, while industrial designer Walter Dorwin Teague (1883–1960) prepared blueprints for a detailed stage set. Teague’s exhibit work for A.B. Dick and several corporations during the 1939 World’s Fair helped solidify his reputation as “Dean of Industrial Design.” The company invested in a conductor’s score by Tom Bennett (1906–1970), who would go on to join NBC Radio as staff arranger and musical director after the World’s Fair. 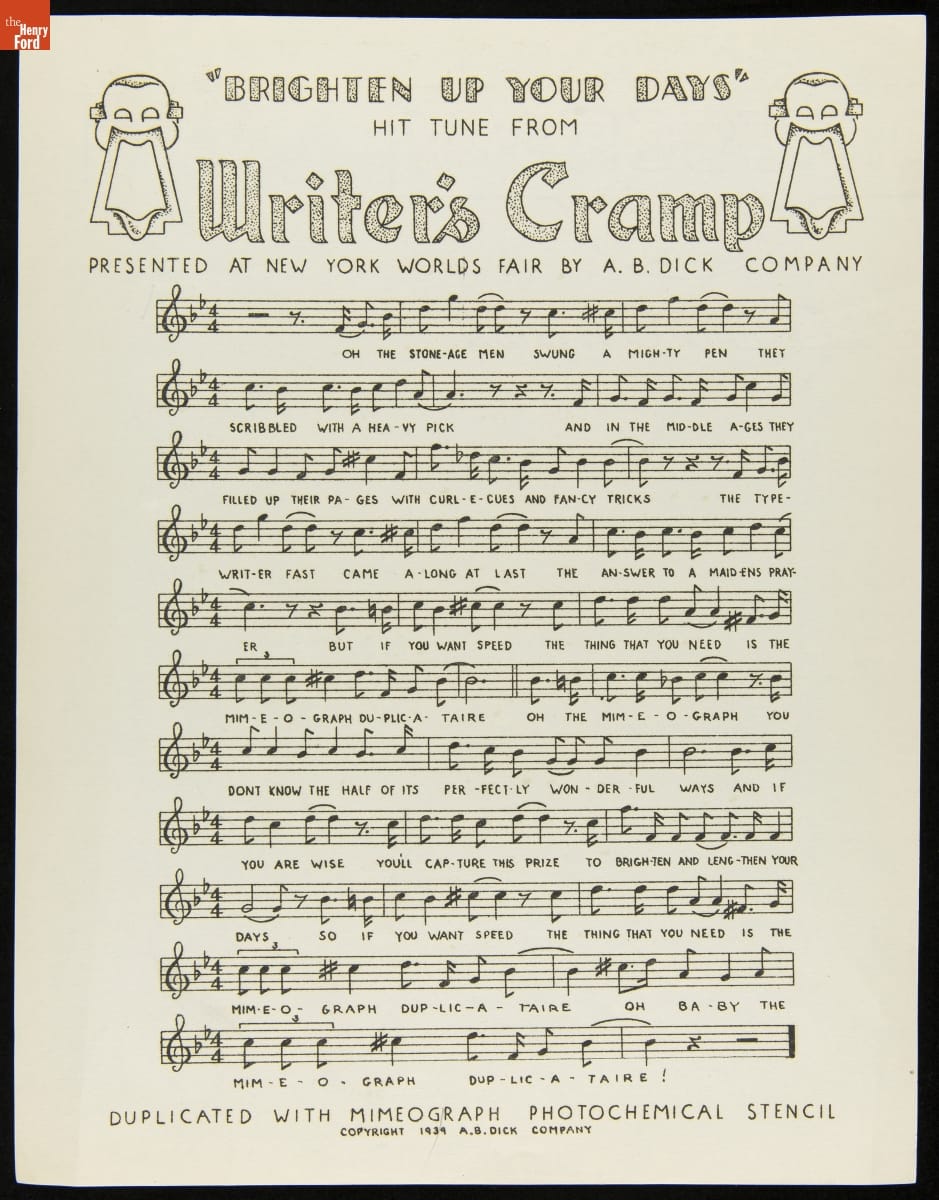 At the end of each Writer’s Cramp performance, A.B. Dick mass-produced the feature tune using a mimeograph machine and photochemical stencil. Attendants distributed this sheet music, calling attention to the modern conveniences: “Just a moment, PLEASE! The young lady right behind you is running off some of the words and music from our show—they’re for you to take home with our compliments. Don’t go away without your copy!”

The Tatterman marionettes from Writer’s Cramp featured prominently in World’s Fair promotional material intended to draw the attention of office outfitters to the Business Systems and Insurance Building. Their little stage set conveyed big lessons to the hundreds of thousands of professionals who flowed through the A.B. Dick exhibit at the New York World’s Fair.


Debra A. Reid is Curator of Agriculture and the Environment at The Henry Ford. Thanks to Saige Jedele, Associate Curator, Digital Content, for editorial guidance.