May 29, 2021 Archive Insight
As we approach the Memorial Day holiday, when our thoughts turn toward lost loved ones and friends, it is insightful to consider how Americans of the past memorialized their loved ones.

Americans always treasured the memory of the dearly departed, but during the era just after American independence, in the late 1700s and early 1800s, elaborate and artistic memorials were the norm. Scholars debate the reasons. Many believe that with the death of America’s most revered founding father, George Washington, in 1799, a fashion developed for creating and displaying memorial pictures in the home. Other scholars argue that the death of Washington coincided with the height of the Neoclassical, or Federal style in America. During the period after the Revolution, Americans saw themselves as latter-day Greeks and Romans. After all, they argued, the United States was the first democracy since ancient times. So, they used depictions of leaders like George Washington, along with imagery derived from antiquity. 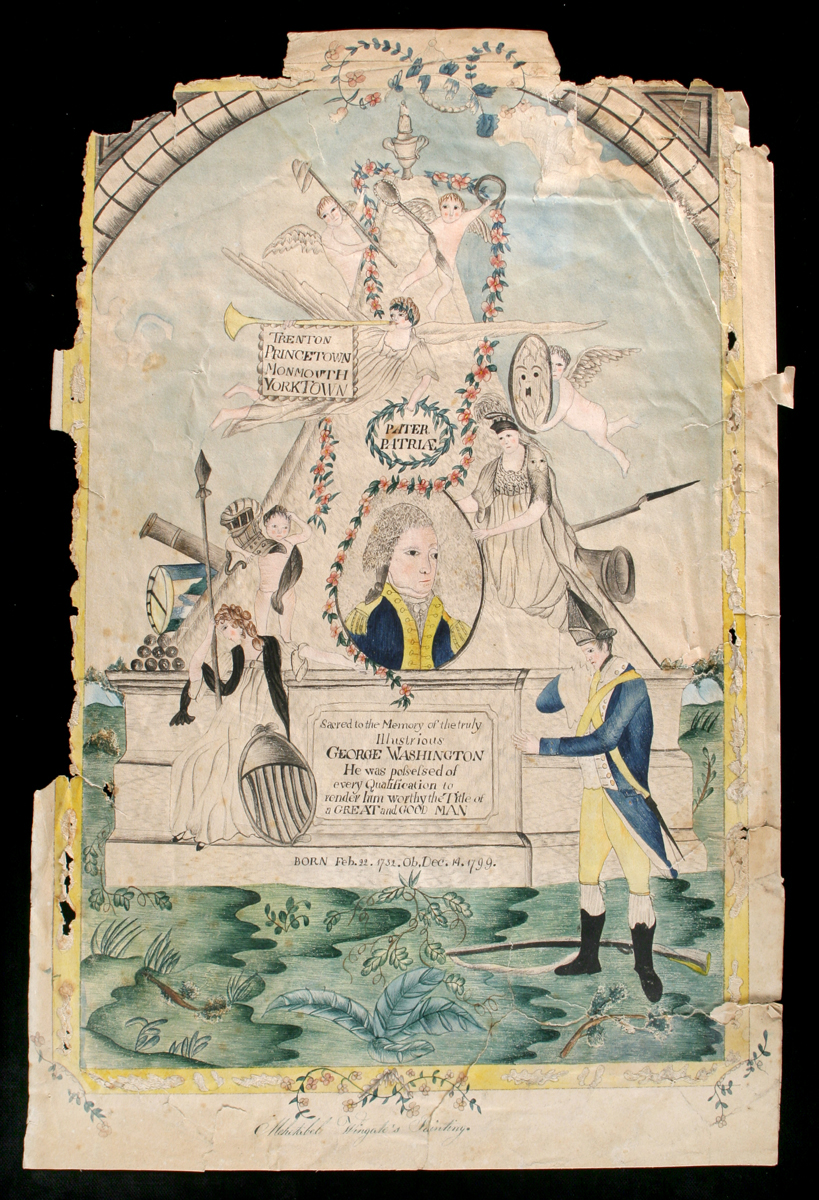 This wonderful memorial painting of George Washington was drawn in pencil and ink and painted in watercolors by a woman in Haverhill, Massachusetts, named Mehetabel Wingate. Born in 1772, Mehetabel was likely trained in painting as part of her education at an academy for genteel young ladies, much like a “finishing school” for young ladies in the 20th century. She also would have been tutored in the needle arts. The concept was to teach proper young ladies the arts as part of an appreciation for the “finer things” in life. This would prepare them for a suitable marriage and help them take their place in refined society.

In the academies, young women were taught to copy from artistic models for their work. In this case, Mehetabel Wingate copied a print engraved by Enoch G. Grindley titled in Latin “Pater Patrae” (“Father of the Country”) and printed in 1800, just after Washington’s death in 1799. Undoubtedly, she saw the print and was skilled enough to copy it in color. The image of the soldier weeping in front of the massive monument to Washington is impressive. Also impressive are the angels or cherubs holding garlands, and women dressed up as classical goddesses, grieving. One of the goddesses holds a portrait of Washington. Of course, the inscriptions tout many of Washington’s accomplishments. Mehetabel Wingate was a talented artist and ambitious in undertaking a composition as complicated as this one. 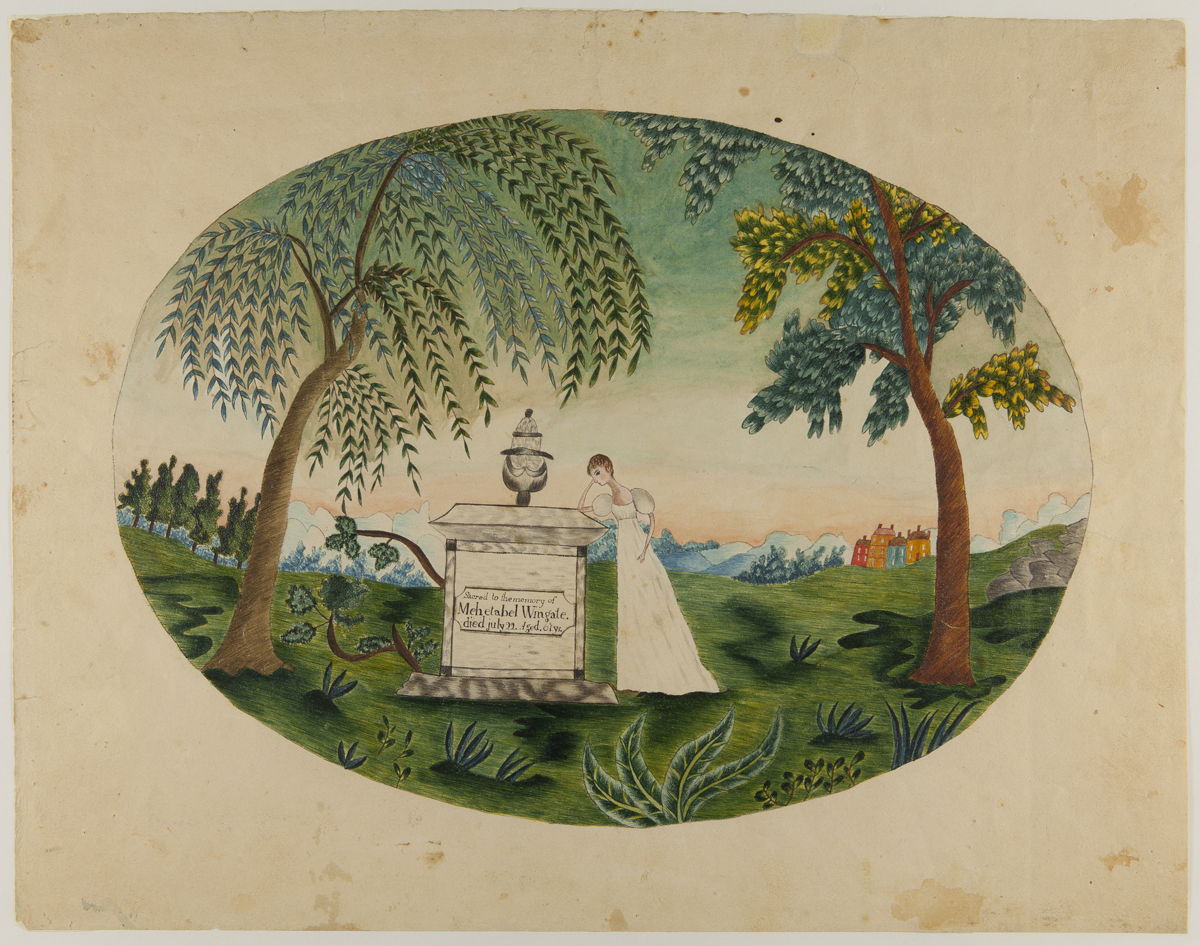 Fortunately, The Henry Ford owns two additional works made by Mehetabel Wingate (1772–1846). From these, we can learn a bit about her life and her family. This remarkably preserved watercolor painting memorializes her mother, also named Mehetabel, who died of consumption (tuberculosis) in 1796. Young Mehetabel, who would have been 24 in 1796, is shown mourning in front of a grave marker, which is inscribed. Although it is simplified, she wears a fashionable dress in the most current style. Around her is an idealized landscape, which includes a willow tree, or “weeping” willow, on the left, which symbolized sadness. On the right is a pine tree, which symbolized everlasting life. In the background is a group of buildings, perhaps symbolizing the town, including the church, which represented faith and hope. These are standard images seen in many, if not most, American memorial pictures. Mehetabel Wingate undoubtedly learned these conventions in the young girls’ academy in her hometown of Haverhill, Massachusetts. 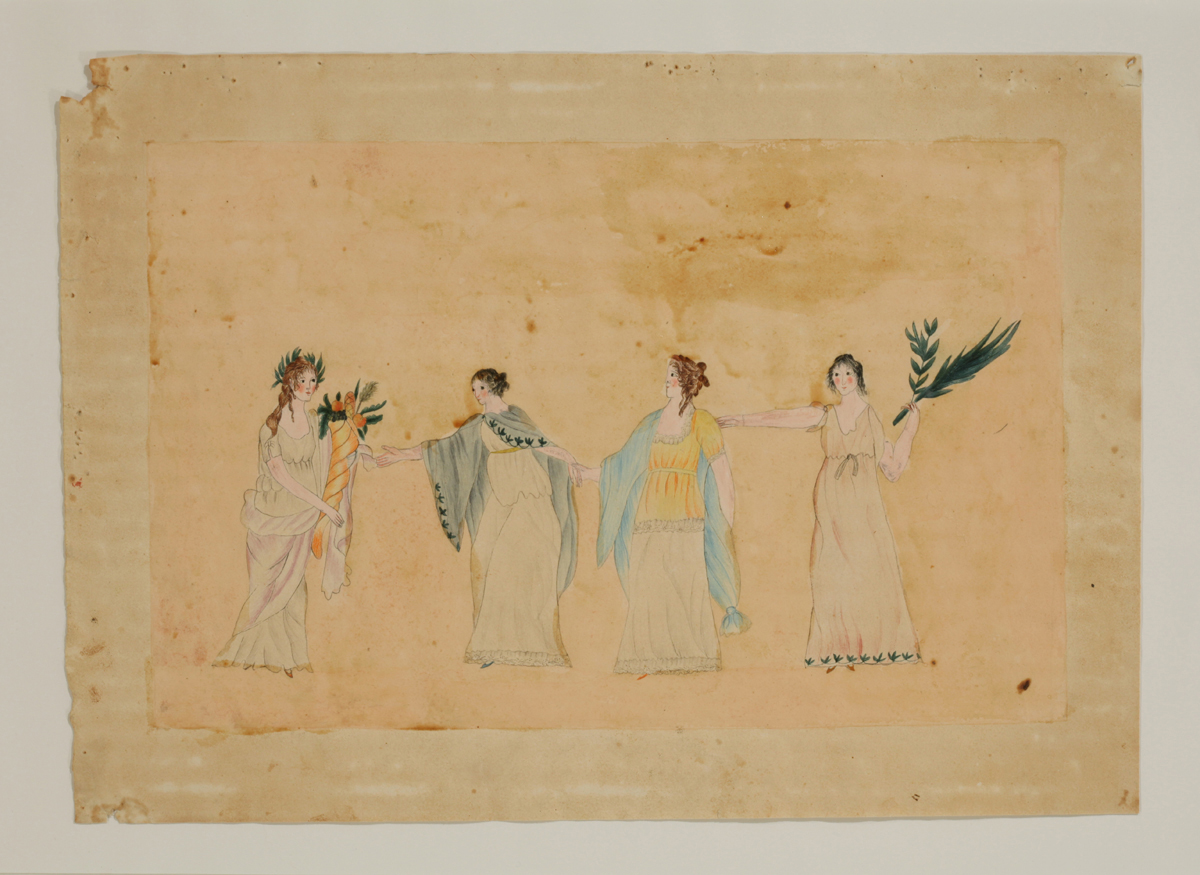 The painting, above, while not a memorial painting, shows us how young ladies in the academies learned how to paint. Mehetabel seems to be practicing poses and angles, as the young ladies dressed as classical goddesses reach out to each other. It likely pre-dates both works previously shown and may have been done as a classroom exercise. As such, it is a remarkable survival. 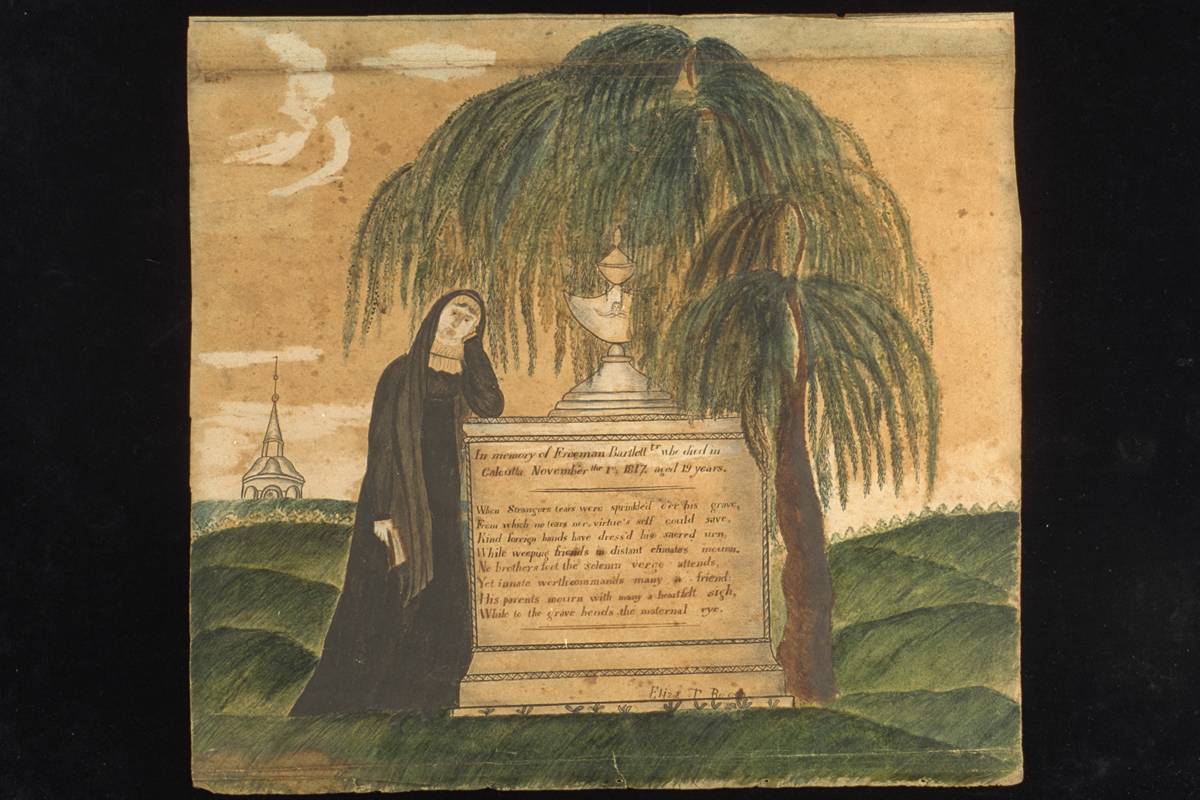 This example, painted later than Mehetabel Wingate’s work, shows the same conventions: a grieving female in front of a tomb with an inscription about the dearly departed—in this case, a young man who died at the tender age of 19 in far-off Calcutta. We also see the idealized landscape with the “weeping” willow tree and the church in the background. 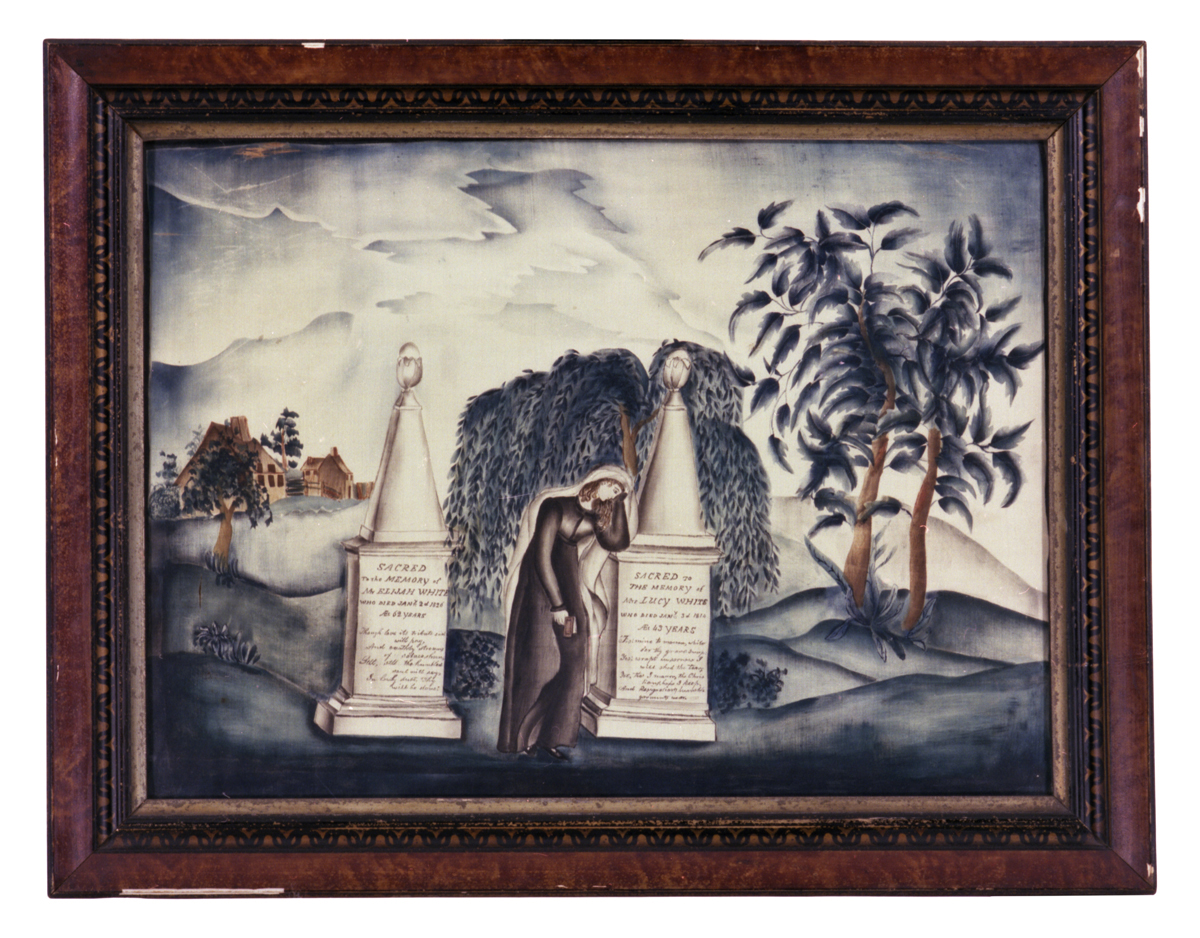 The painting above, done a few years later, shows some of the variations possible in memorial pictures. Unlike the previous examples, painted on paper, this was painted on expensive, white silk. It commemorates two people, Elijah and Lucy White, presumably husband and wife, who both died in their sixties. We see the same imagery here as before, although the trees, other than the “weeping” willows, are so abstract as to be difficult to identify. 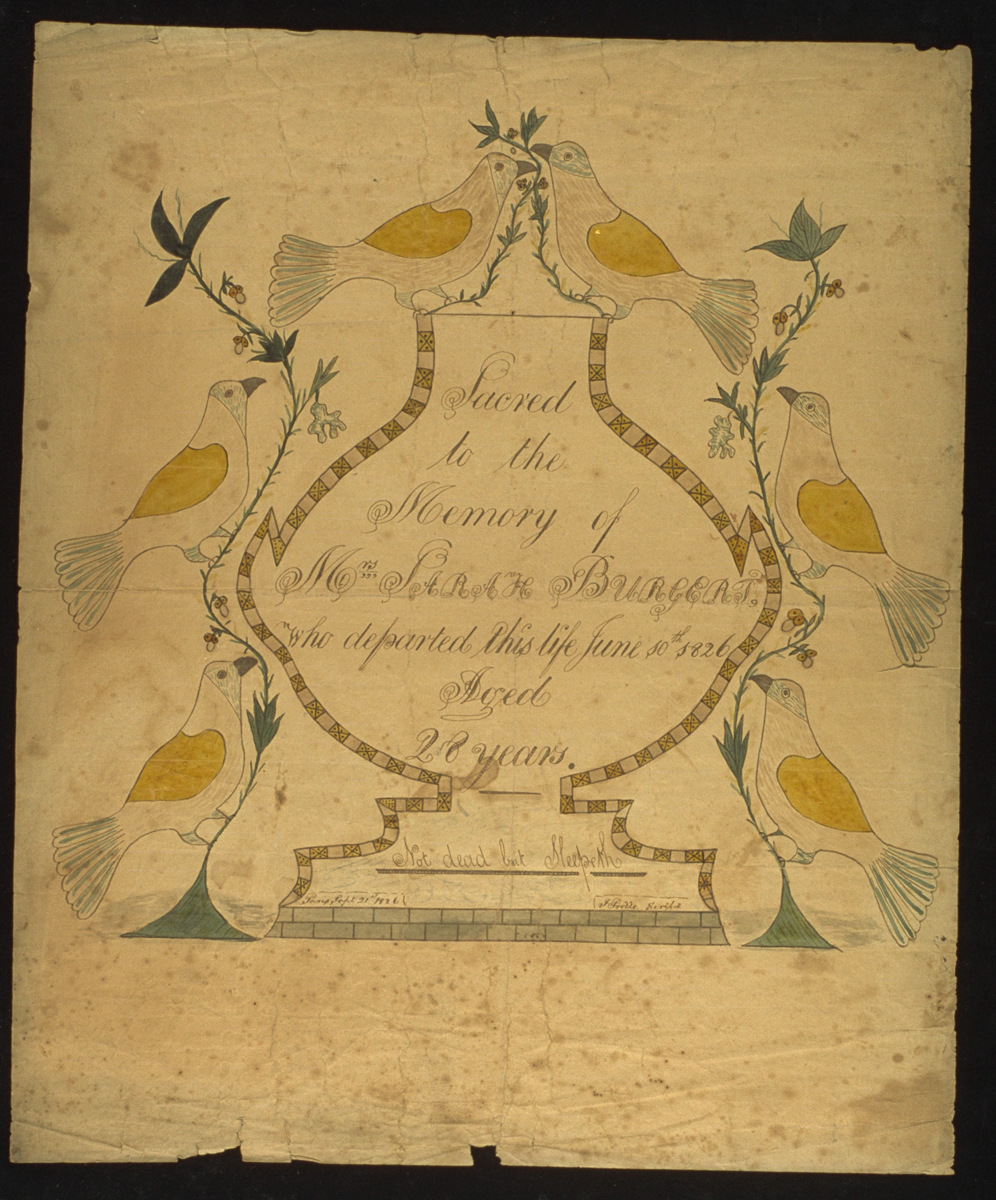 The example above represents a regional approach to memorial paintings. German immigrants to Pennsylvania in the late 1700s and early 1800s brought an interesting, stylized approach to their memorial paintings that have come to be known as “Fraktur.” The urn that would be seen on top of the monument in the previous examples now takes center stage, and is surrounded by symmetrically arranged birds. What we are seeing here is a combination of New England imagery, such as the urn, with Pennsylvania German imagery, such as the stylized birds. We know that this work was made in a town called Paris, as the artist, J. Preble, signed it in front of her name. There are two possible locations for Paris—one in Stark County, Ohio, and the other in Kentucky. Both had sizeable German immigrant populations in the 1820s. As America was settled and people moved west in the early 19th century, cultural practices melded and merged.

By the 1840s and 1850s, the concept of the memorial painting came to be viewed as old-fashioned. The invention of photography revolutionized the way folks could save representations of loved ones and friends. By the middle of the 19th century, these paintings were viewed as relics from the past. But in the early 20th century, collectors like Henry Ford recognized the historic and artistic value of these works and began to collect them. As a uniquely American art, they provide insight into the values of Americans in the late 18th and early 19th centuries.