Our Bugatti Royale (Temporarily) Heads to California in 2017

Undoubtedly, our 1931 Bugatti Type 41 Royale is one of the most popular automobiles in the The Henry Ford’s collection. Rarely off display, the Royale has been a fixture in Henry Ford Museum for decades. It’s rare to walk by the car and not see at least one person snapping a photo, studying the label, or simply daydreaming about what it’s like behind that big steering wheel. And why not? The Royale has everything going for it: beautiful styling, superb engineering, and a princely price tag – not to mention, as one of only six in the world, exceptional exclusivity.

Needless to say, it would take something very special for us to loan the Bugatti to another museum. Our friends at the Petersen Automotive Museum in Los Angeles have presented us with just such a reason. Last month, the Petersen opened an exciting new year-long exhibition, The Art of Bugatti. Automobile aficionados know the Bugatti name via the magnificent race and road cars built by Ettore Bugatti in the 1920s and 1930s. But Ettore was just one member of this remarkably artistic Italian-French family. Ettore’s father, Carlo Bugatti, designed exquisite furnishings. Ettore’s brother, Rembrandt, was a talented sculptor. (The elephant that sits atop our Royale’s radiator is based on a piece by Rembrandt Bugatti.) Ettore’s niece (and Rembrandt’s daughter), Lidia, was an accomplished artist. 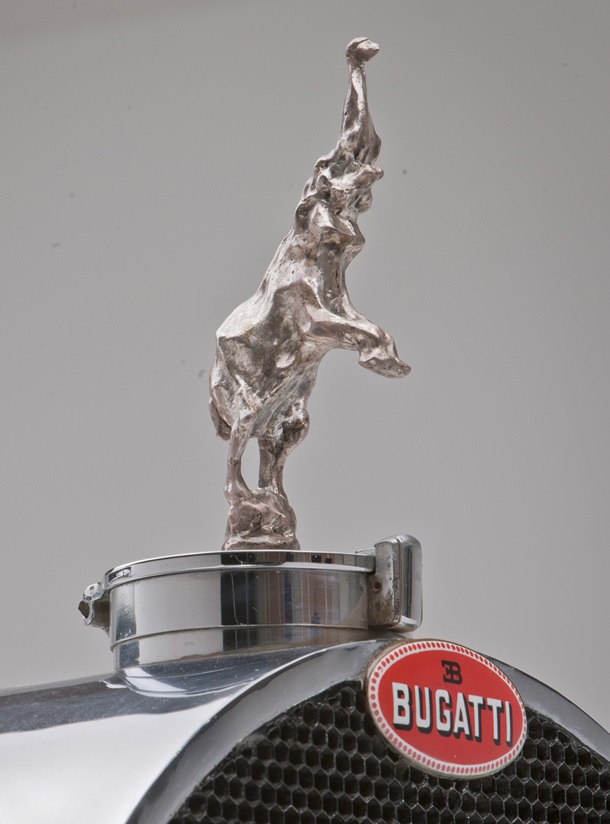 The Bugatti Royale’s distinctive elephant mascot was cast from a sculpture by Rembrandt Bugatti, brother of Royale designer Ettore Bugatti.

Furniture, paintings, sculpture, silver and – of course – automobiles from each of these three Bugatti generations are featured in the Petersen’s show. The broad-ranging exhibit even reaches into the present day. Volkswagen, current owner of the Bugatti marque, has loaned a 2016 Bugatti Chiron to the show. The two-seat supercar, capable of an astounding 260 miles per hour, carries forward Ettore Bugatti’s tradition of elegance combined with performance.

Our Bugatti Royale will be away at the Petersen for five months. The car leaves Henry Ford Museum in mid-January 2017 and returns in mid-June. While it’s away, we’re going to fill the Bugatti’s place in Driving America with another special luxury car from our collection: J.P. Morgan, Jr.’s 1926 Rolls-Royce New Phantom Limousine. It’s been several years since the Rolls-Royce has been on view, so the loan provides a special opportunity for The Henry Ford’s visitors, too.

We are proud to be a part of this wonderful new Bugatti exhibition, and we encourage anyone visiting southern California between now and October 2017 to stop by the Petersen. It’s properly regarded as one of the world’s finest auto museums, and The Art of Bugatti only adds to that reputation.