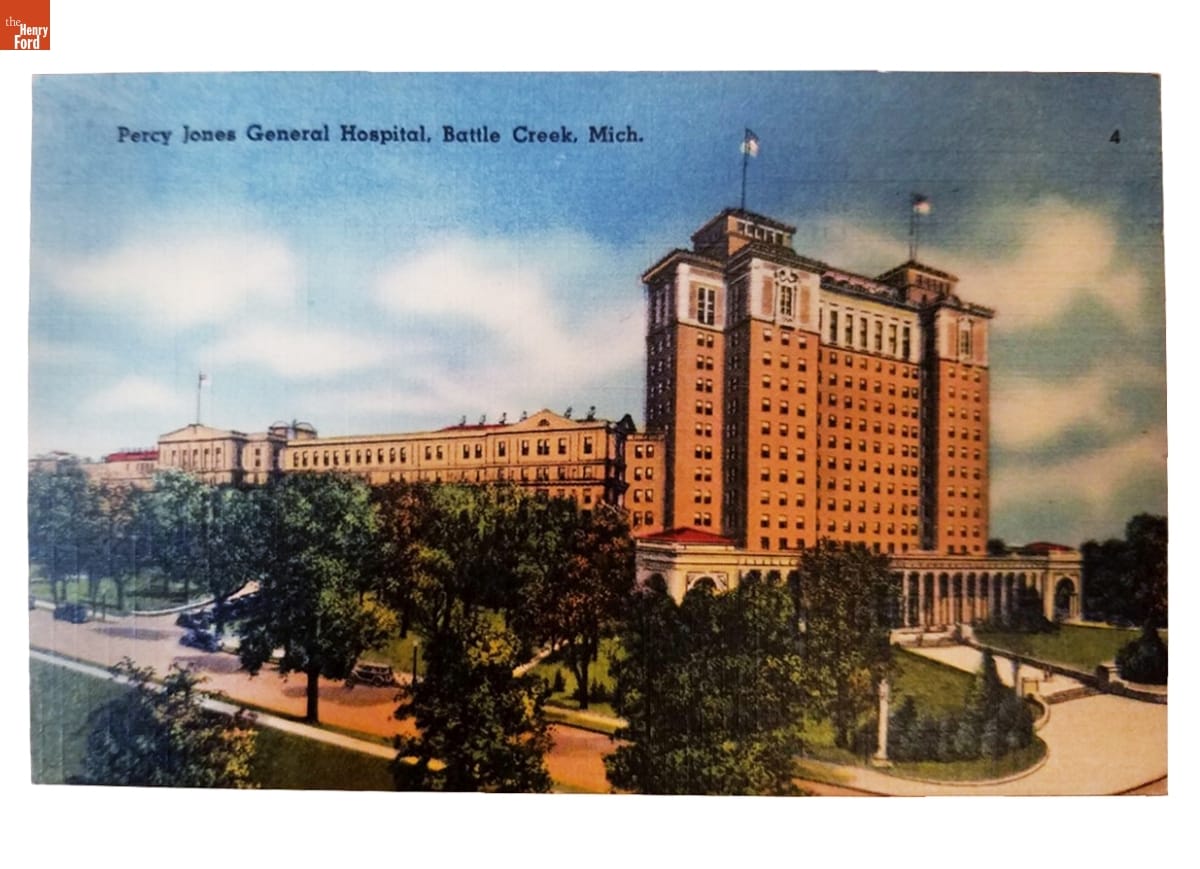 When most people think of Battle Creek, Michigan, breakfast cereal comes to mind--the industry created there by “cereal” entrepreneurs W.K. Kellogg and C.W. Post at the turn of the 20th century.

Yet, Battle Creek was also home to an important World War II military medical facility, the Percy Jones General Hospital. By the end of the war, Percy Jones would become the largest medical installation operated by the United States Army. The hospital and its story are, perhaps, hidden in plain sight in a building now known as the Hart-Dole-Inouye Federal Center—unless one notices the historical marker located there.

Before a Hospital, a Sanitarium

Even before its genesis as Percy Jones, the site and its buildings had rich layers of use and history. In 1866, the Seventh Day Adventists established the Western Health Reform Institute in a cottage on the site to promote their principles of preventative medicine and healthful nutrition. In 1876, Dr. John Harvey Kellogg (older brother of cereal entrepreneur W.K. Kellogg) became its director, renaming the facility the Battle Creek Sanitarium and expanding it to include a central building, a hospital, and other cottages. In 1902, a fire destroyed the sanitarium. An elegant, six-story Italian Renaissance style building soon rose in its place, completed in 1903. In 1928, the sanitarium was enlarged with a fifteen-story tower addition containing more than 265 hotel-like guest rooms and suites, most of which had private bathrooms. This expansive health and wellness complex on 30 acres could accommodate almost 1,300 guests. After the economy crashed in 1929, business declined. By 1933, the sanitarium went into receivership, and the Great Depression that followed forced the institution to sell assets to help pay its debt. 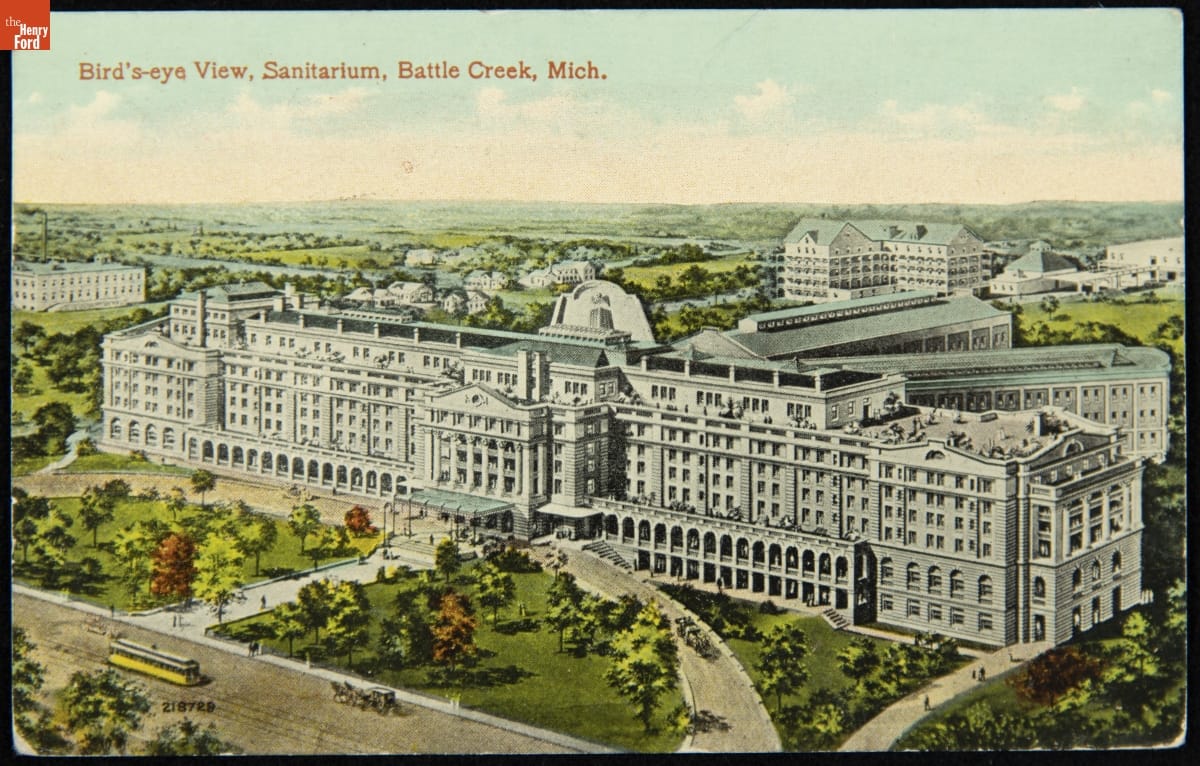 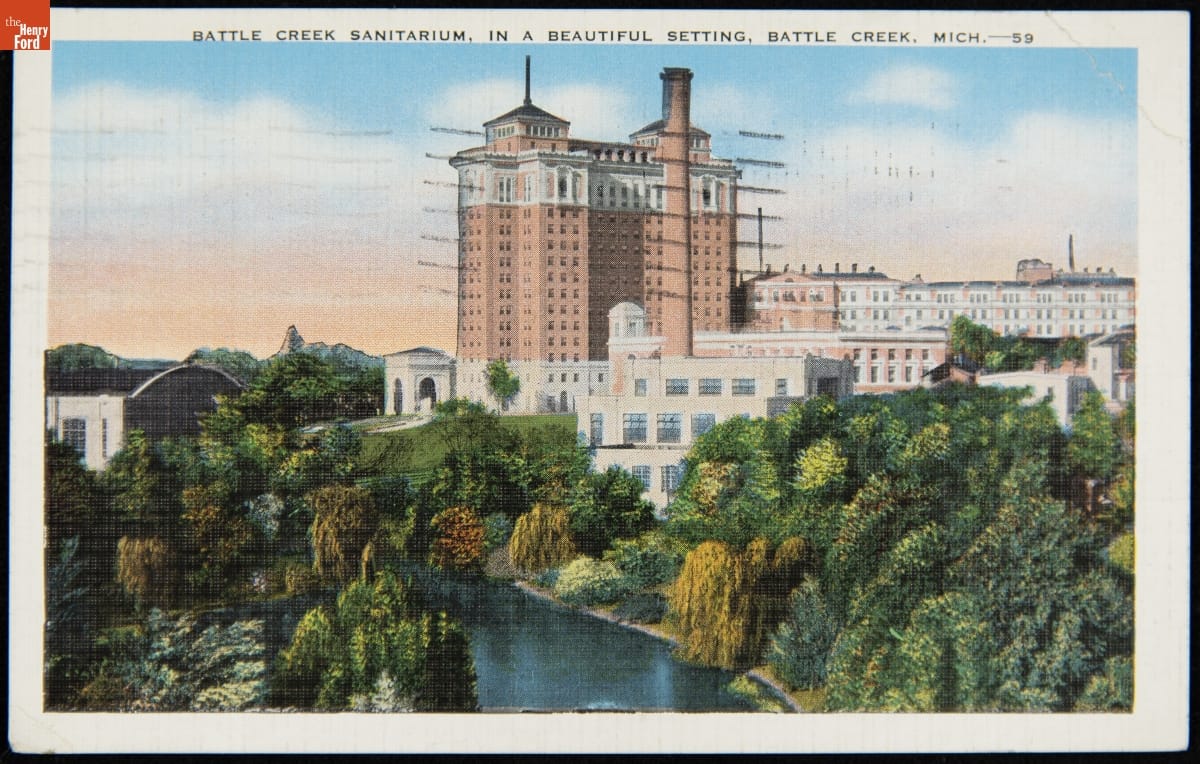 With the outbreak of World War II in Europe in 1939, the United States military began to build up its armed forces and medical treatment capabilities. In late 1940—in order to mobilize for what would become a growing need if the United States entered the war—the Medical Department began to develop a plan for providing a comprehensive system of progressive medical care from battlefield to stateside. A year later, with the Japanese attack on Pearl Harbor in December 1941, the United States did enter the war. The military not only constructed new hospital facilities, but also acquired civilian buildings, making alterations and expanding as needed.

In August 1942, the United States Army purchased the near-vacant main Battle Creek Sanitarium building and converted it into a 1,500-bed military hospital, with crews working around the clock for six months to complete it. Dedicated on February 22, 1943, the hospital was named after Col. Percy L. Jones, a pioneering army surgeon who had developed modern battlefield ambulance evacuation during World War I. By the time the hospital opened—a little over a year after the United States entered the war—American troops had fought in the North Atlantic, North Africa, Italy, and the Pacific. Two and one-half more years of fierce fighting in Europe and the Pacific lay ahead. World War II—a global war which would directly involve 100 million people in more than 30 countries—would become the most costly and far-reaching conflict in history.

Percy Jones would become one of the army’s nine Hospital Centers, medical facilities that included both a General and Convalescent Hospital. Nearby (three miles from Battle Creek) Fort Custer, a military training base and activation point for Army inductees from Michigan and the Midwest, also served as the site of Percy Jones Convalescent Hospital for patients further along in the recovery process. In 1944, W.K. Kellogg’s summer mansion on nearby Gull Lake became a rehabilitation center for Percy Jones General Hospital and the Convalescent Center.

As the number of casualties increased, the facility grew—its authorized capacity would reach 3,414 beds. In one month alone, over 700 operations were performed. At the end of the war in August 1945, the number of patients at the hospital’s three area sites peaked at 11,427.

The massive Battle Creek hospital complex was self-contained and fully integrated. It had its own water supply and power generation, as well as a bank, post office, public library, and radio station. An indoor swimming pool and a bowling alley helped wounded vets regain their health. Rails and ramps were constructed throughout the facility. The Percy Jones Institute, an accredited high school, offered educational and training programs for patients, ranging from photography to agriculture to business. 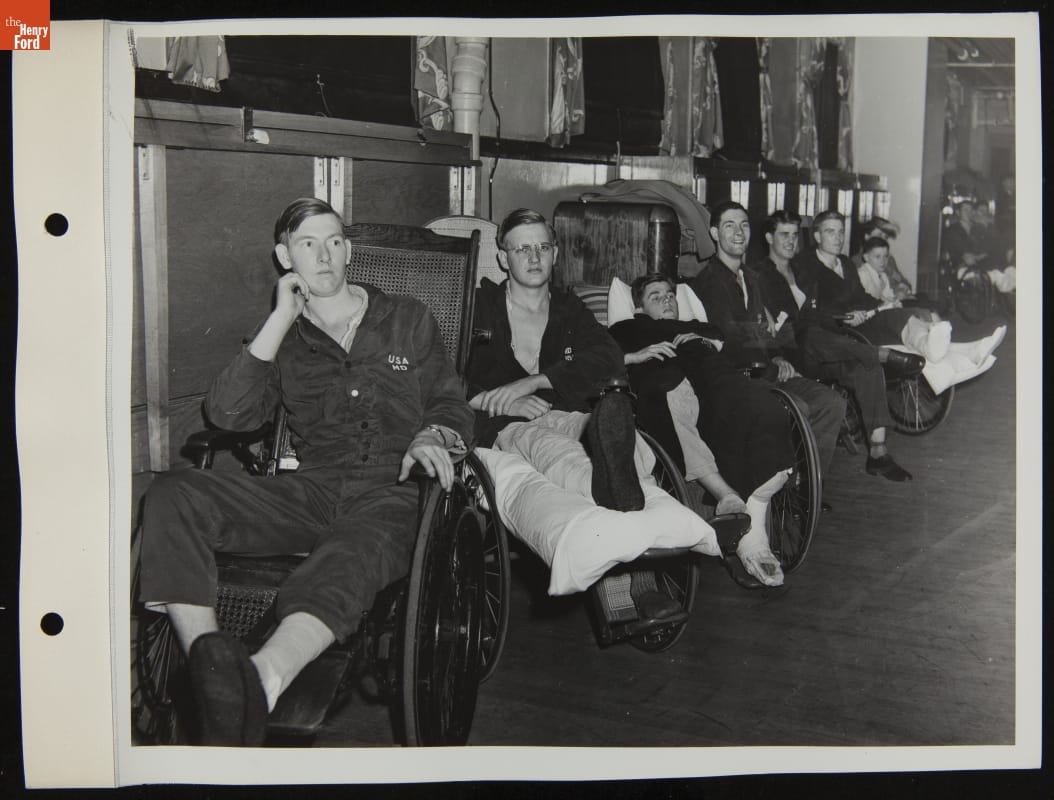 Convalescing soldiers at Percy Jones Hospital in April 1944. The soldiers are wearing the Army-issued convalescent suits and bathrobes provided to patients at stateside hospitals. / THF270685 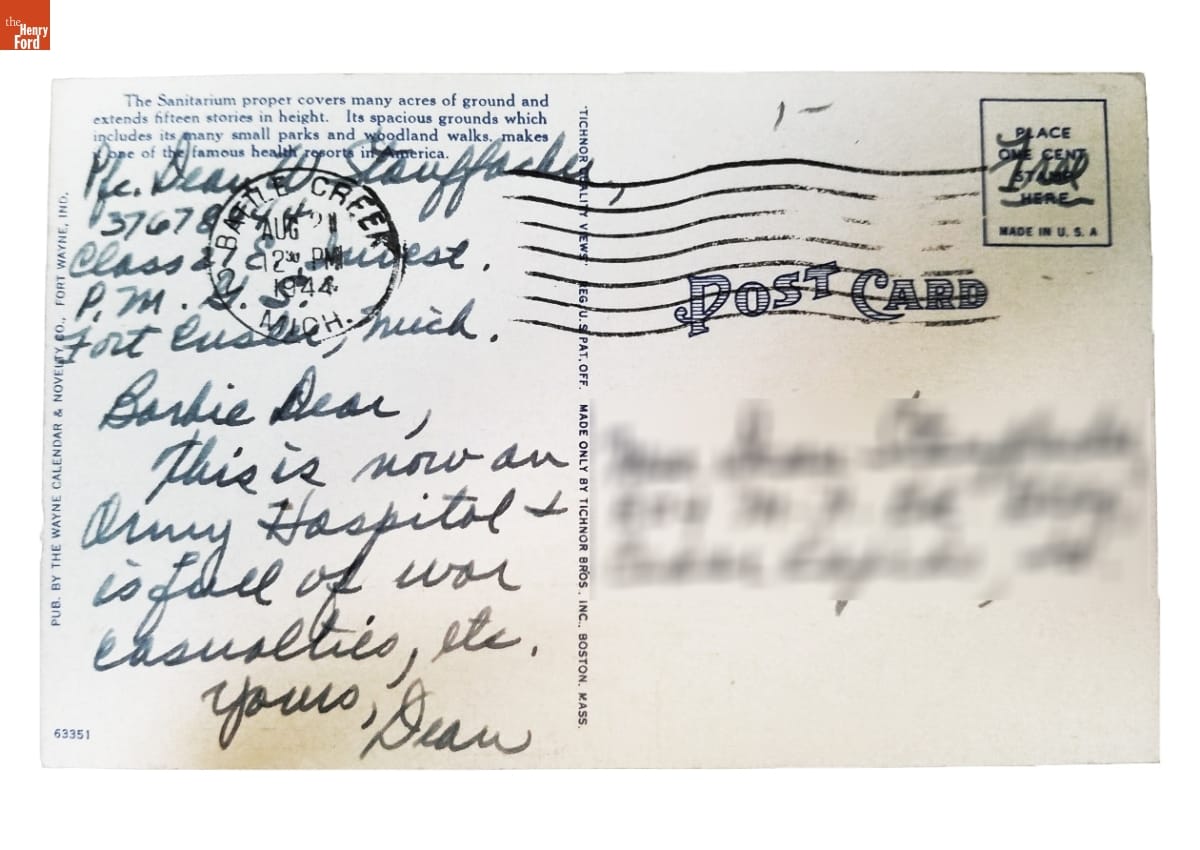 In August 1944, private Dean Stauffacher—training at nearby Fort Custer—sent the postcard at the top of this post (THF184122) of Percy Jones General Hospital to his wife, noting that “This is now an Army Hospital & is full of war casualties, etc.” This postcard was first published during the sanitarium era—the caption on the back dates from that period. Only the title on the front was updated to reflect the building’s use as a military hospital. / THF184123_redacted

Supporting the Troops at Percy Jones 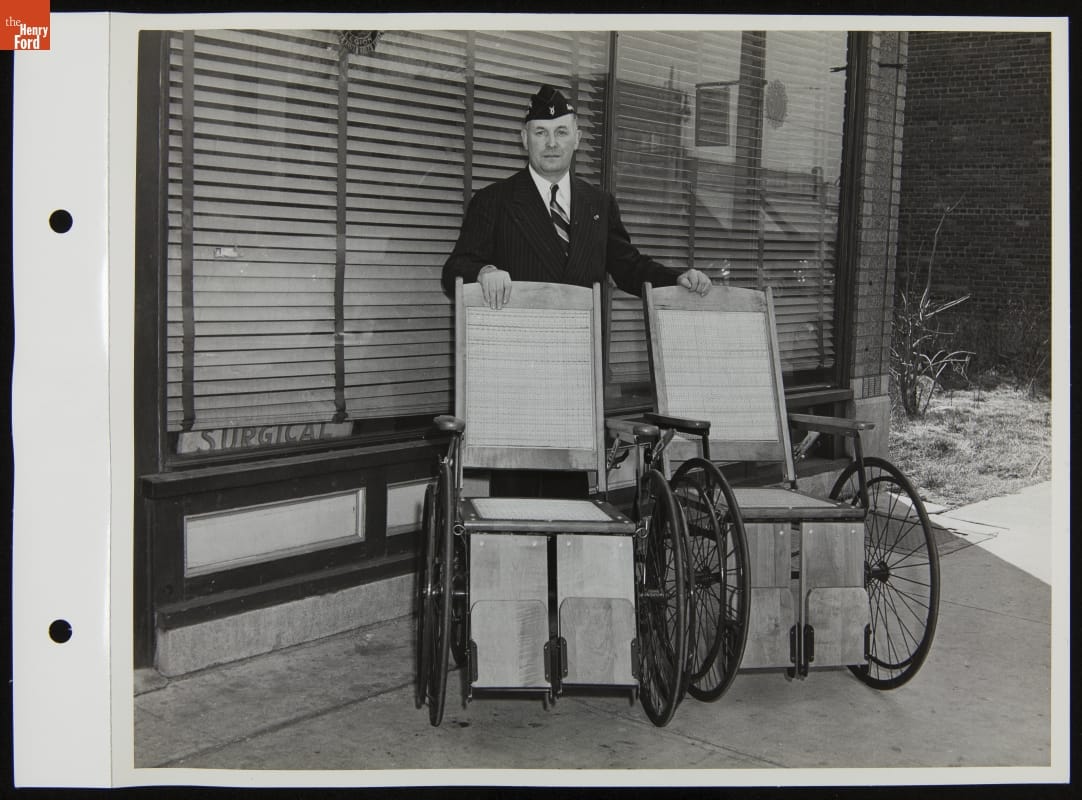 A Ford Motor Company employee purchased two wheelchairs for Percy Jones Hospital with his muster out pay from the military, March 1944. / THF270681 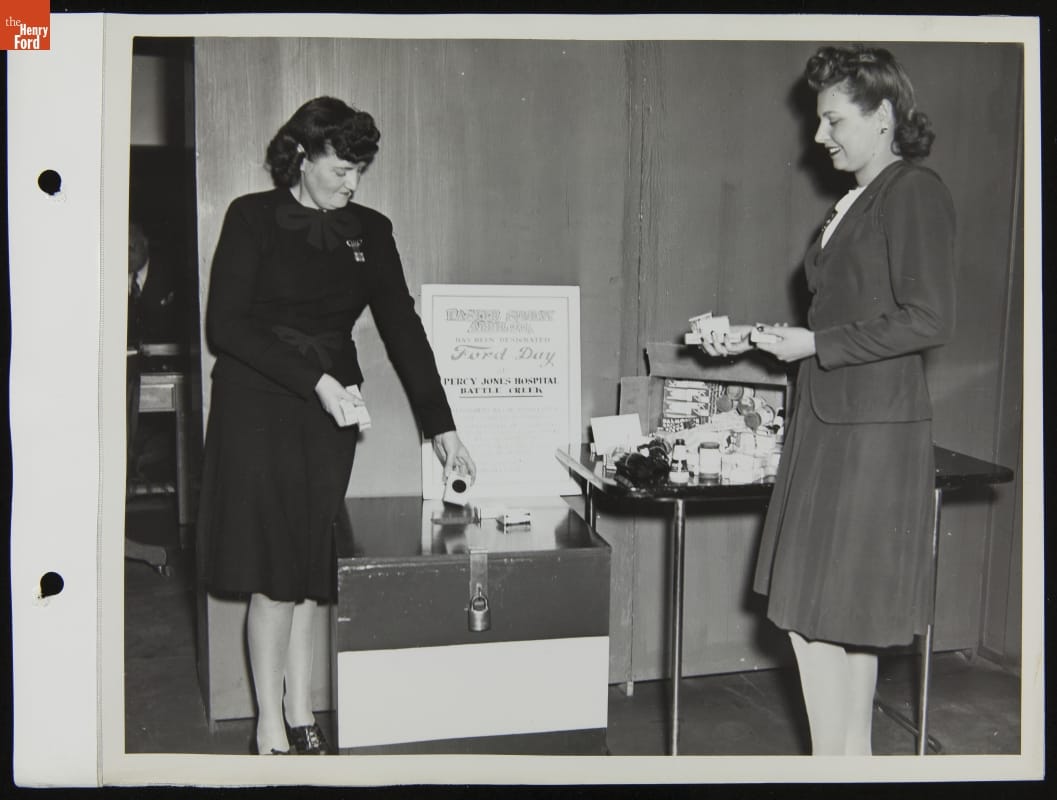 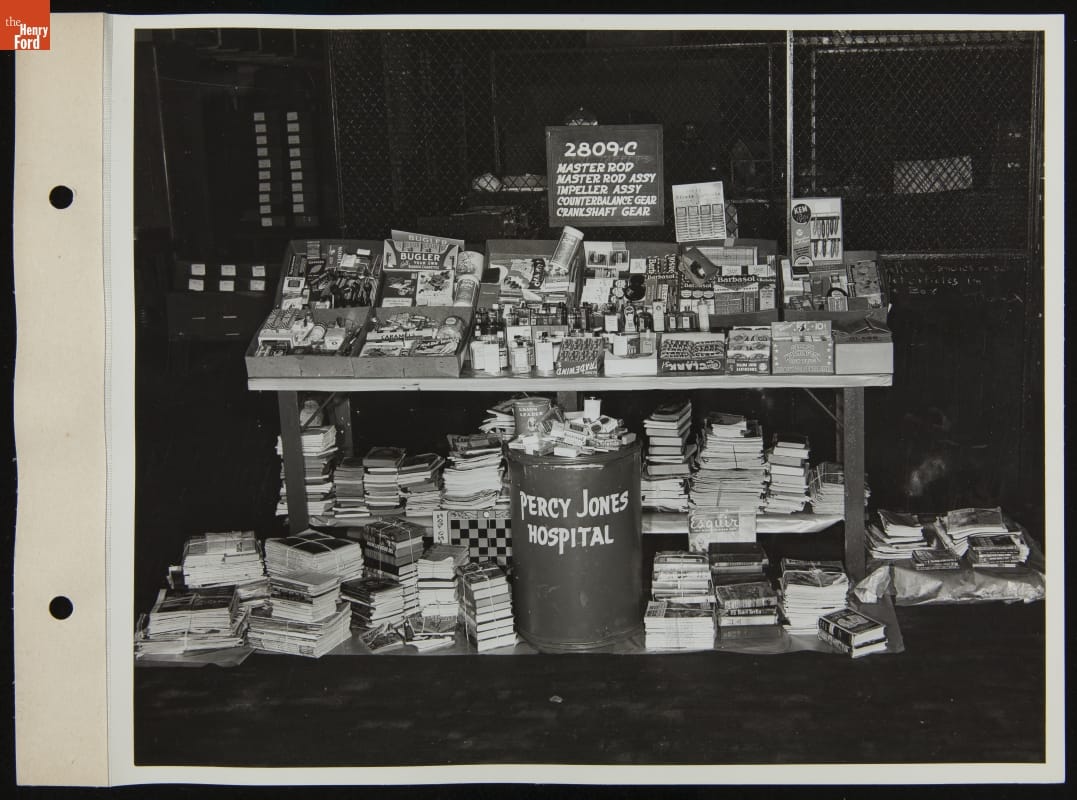 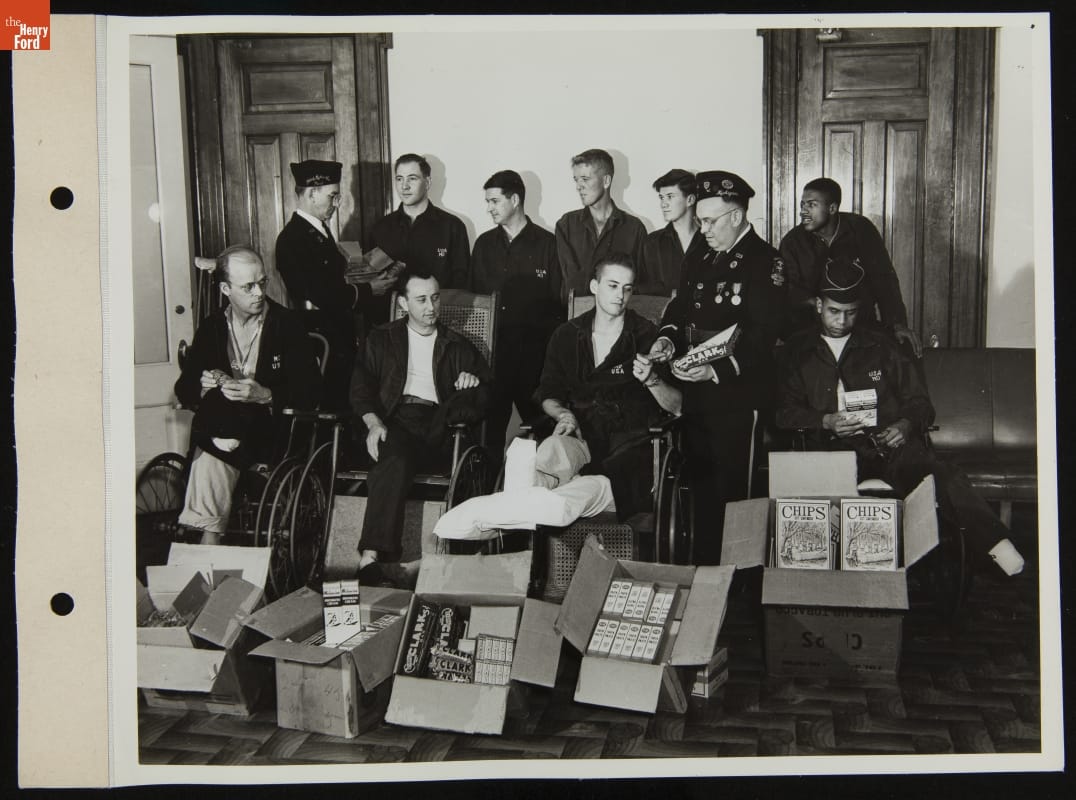 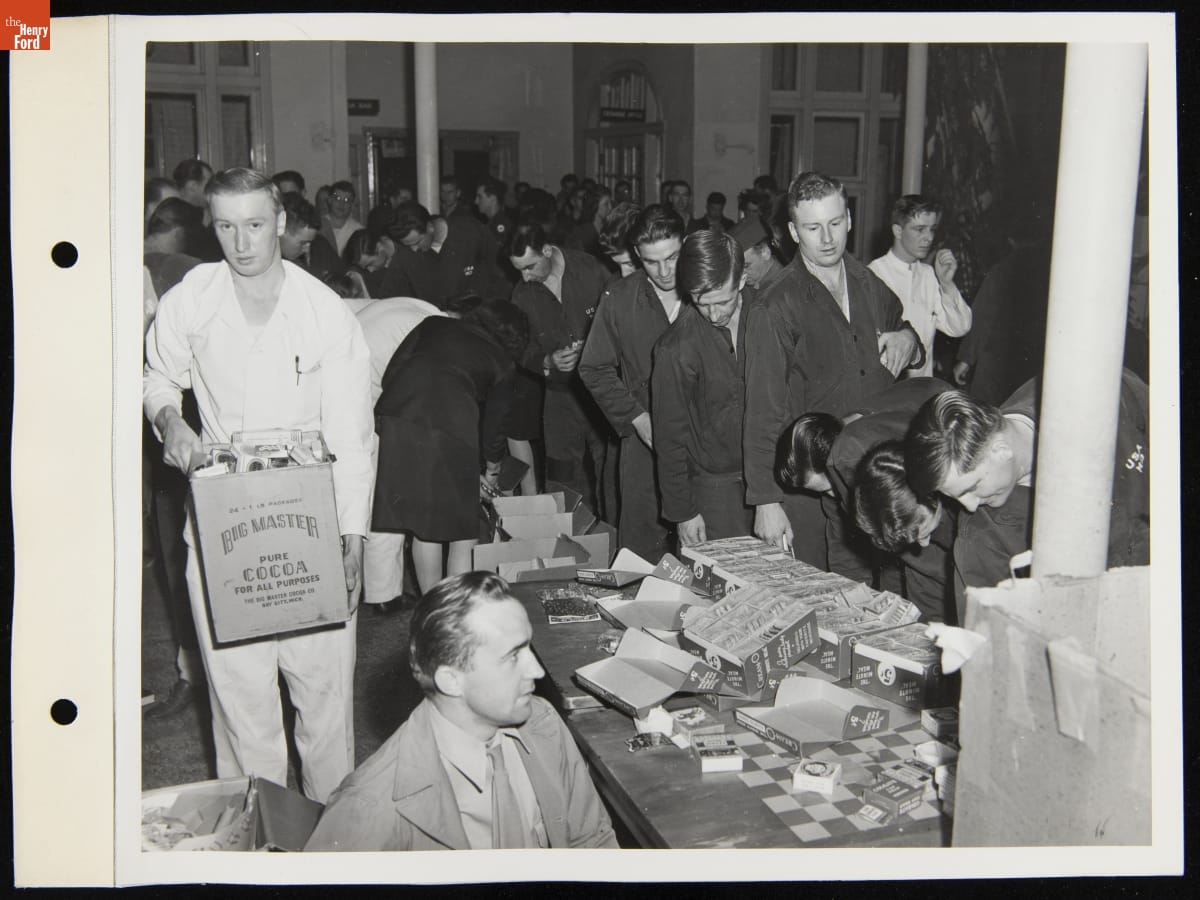 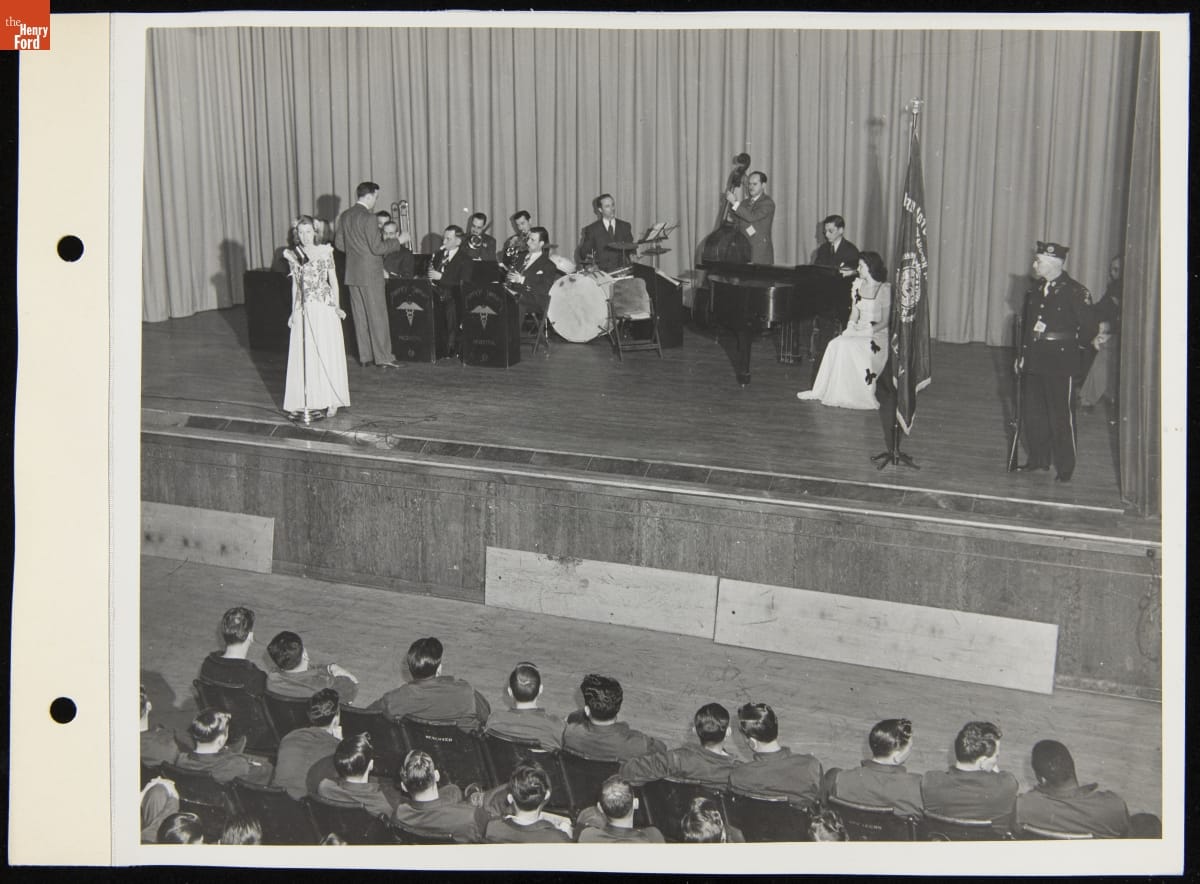 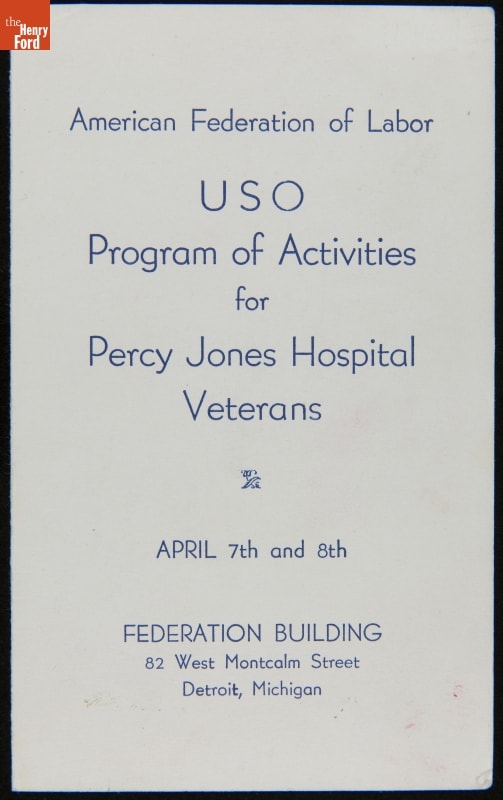 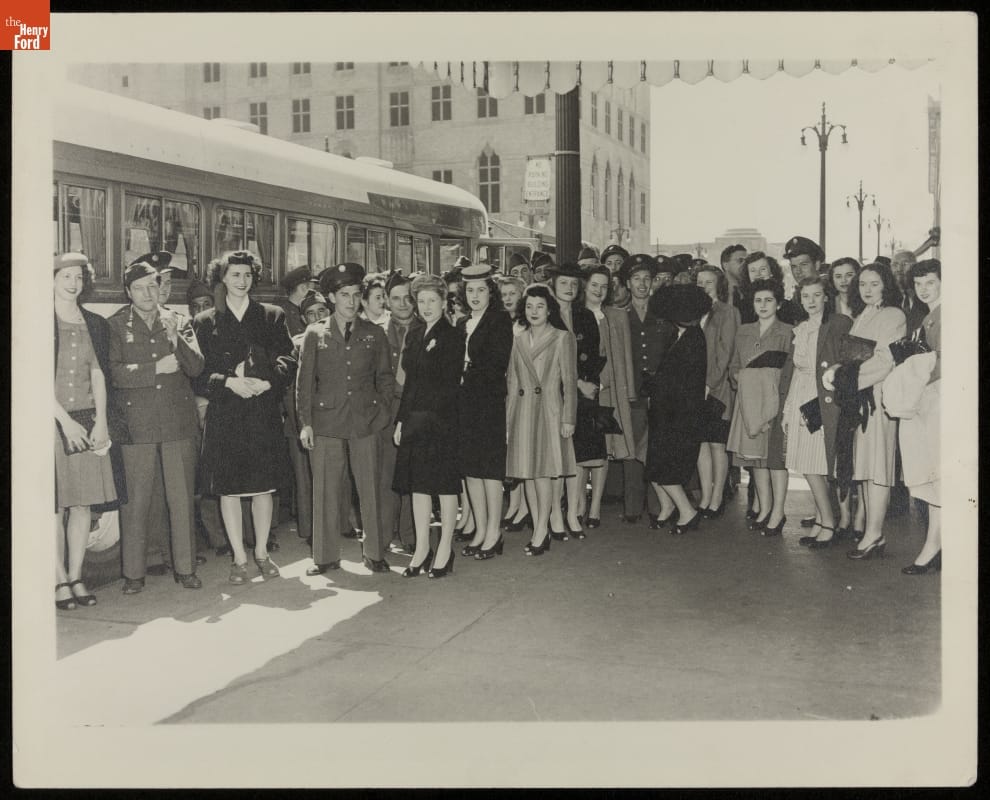 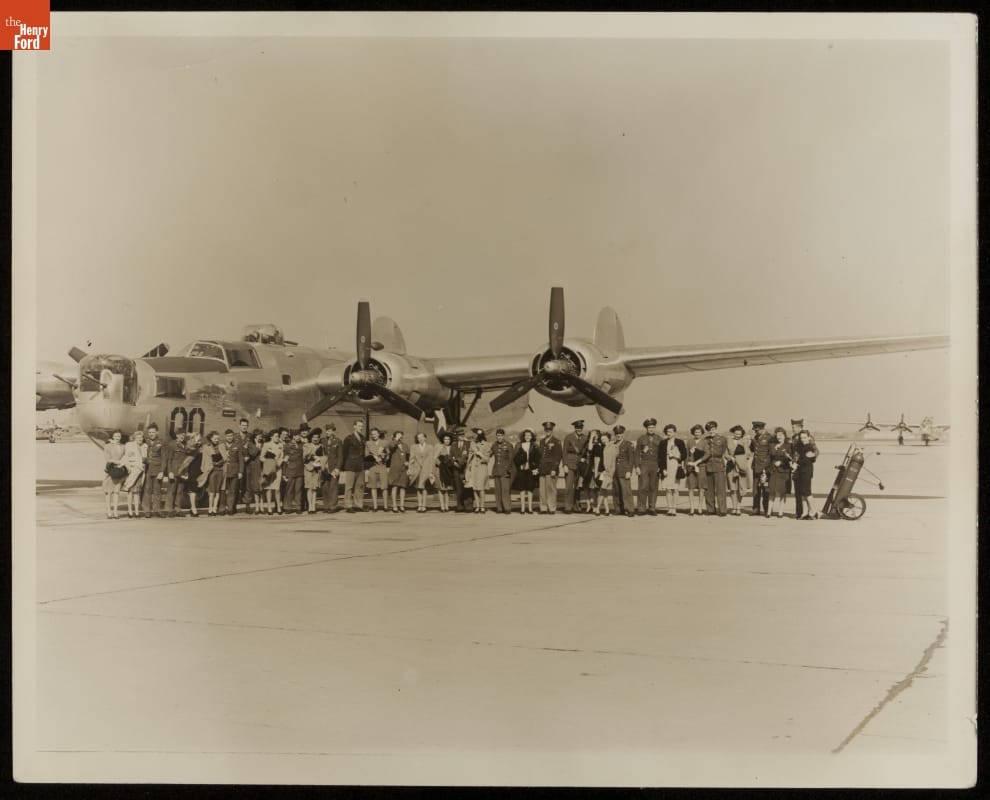 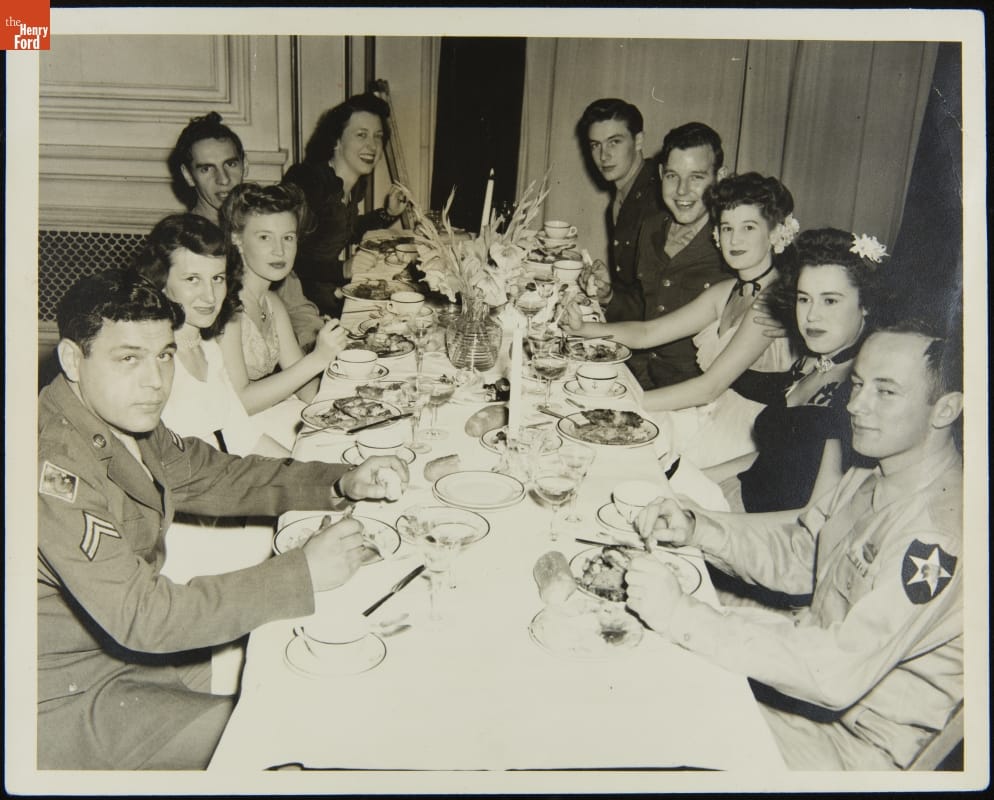 Detroit’s AFL/USO Committee organized a series of weekend social activities for servicemen from Percy Jones Hospital. Volunteer hostesses provided companionship for these soldiers during dinner, dancing, or a visit to local points of interest, as seen in the four images above: Program of social activities, April 1945; soldiers and hostesses gather for the day’s activities; visiting the Willow Run Bomber Plant near Ypsilanti, Michigan; enjoying dinner at the Federal Building in Detroit. / THF290072, THF211406, THF211408, THF289759

After a short deactivation period after World War II, the hospital reopened soon after the Korean War broke out in June 1950. Once again, wounded soldiers found medical treatment and emotional support at Percy Jones Hospital until the war’s end three years later.

With the end of the Korean War, the hospital closed permanently in 1953. But its legacy lived on in the lives of the nearly 95,000 military patients who received care at Percy Jones during World War II and the Korean War. And in the fact that Battle Creek became the first American city to install wheelchair ramps in its sidewalks, created to accommodate Percy Jones patients who visited downtown.

The hospital’s story would begin its fade from recent memory in 1954, as federal agencies moved into the building (now renamed the Battle Creek Federal Center)—only to reemerge (albeit subtly) in 2003. That year, the complex was renamed to honor three United States senators who had been patients at Percy Jones Hospital during World War II: Philip Hart of Michigan, Robert Dole of Kansas, and Daniel Inouye of Hawaii. The building’s new name honored the public service careers of these men—and also quietly reflected what Percy Jones Hospital and its staff had offered not only these World War II veterans, but tens of thousands of their fellow soldiers.