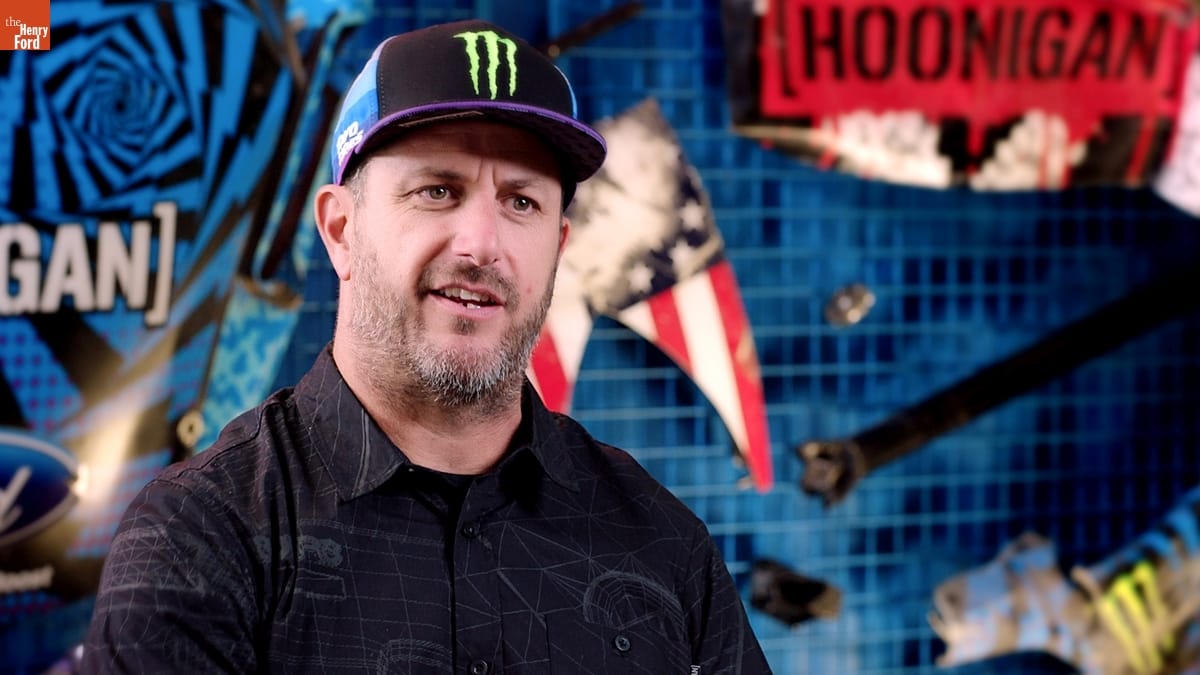 We are deeply saddened by the loss of Ken Block, who passed away in a snowmobile accident in Utah on January 2, 2023. He is survived by his wife, Lucy, and three children. Over the past 30 years, Block distinguished himself on many fronts. He co-founded a top sportswear brand. He competed in skateboarding and snowboarding. He earned multiple podium finishes in rally races. Most famously, Block expanded motorsport’s meaning and fanbase with a series of beautifully filmed and expertly performed videos showcasing his behind-the-wheel skills and sports-marketing savvy.

Ken Block was born in Long Beach, California, on November 21, 1967. Like many Southern California teenagers at the time, he was an avid skateboarder. Block understood the fashion and culture building up around the sport, and he formed his own printing business that sold hand-screened T-shirts to area skate shops. By 1992, his little company was earning more than $1 million a year. Block partnered with Damon Way, brother of professional skater Danny Way, in 1994 to launch a new brand: DC Shoes. Ten years later, Block and Way sold DC Shoes to Quicksilver sporting apparel.

Having achieved success in his first career, Block decided to pursue another teenage passion and take up European-style automotive rally racing – at age 37. Block proved a natural in rallying. He joined the U.S.-based Rally America series in 2005 and earned five top-five finishes in his debut season, gaining Rookie of the Year honors in the process. Block’s age – and the wisdom that came with it – proved to be an asset, as did his marketing experience from his DC Shoes days. Block secured a handsome sponsorship deal from Subaru in 2006.

On November 11, 2008, Block uploaded a four-and-a-half-minute video to YouTube he called Ken Block Gymkhana Practice. He borrowed the term “gymkhana” from horse-riding contests in which equestrians completed various events in a specific sequence. This is exactly what Block did in his video – albeit with different horsepower. Compared to what would come, Block’s first Gymkhana video was short and simple, without fancy camerawork or rapid-fire editing. But it was exciting. Behind the wheel of his 2006 Subaru Impreza rally car, Block offered a showcase of pure, skilled driving without any camera tricks or computer-graphics sweetening. 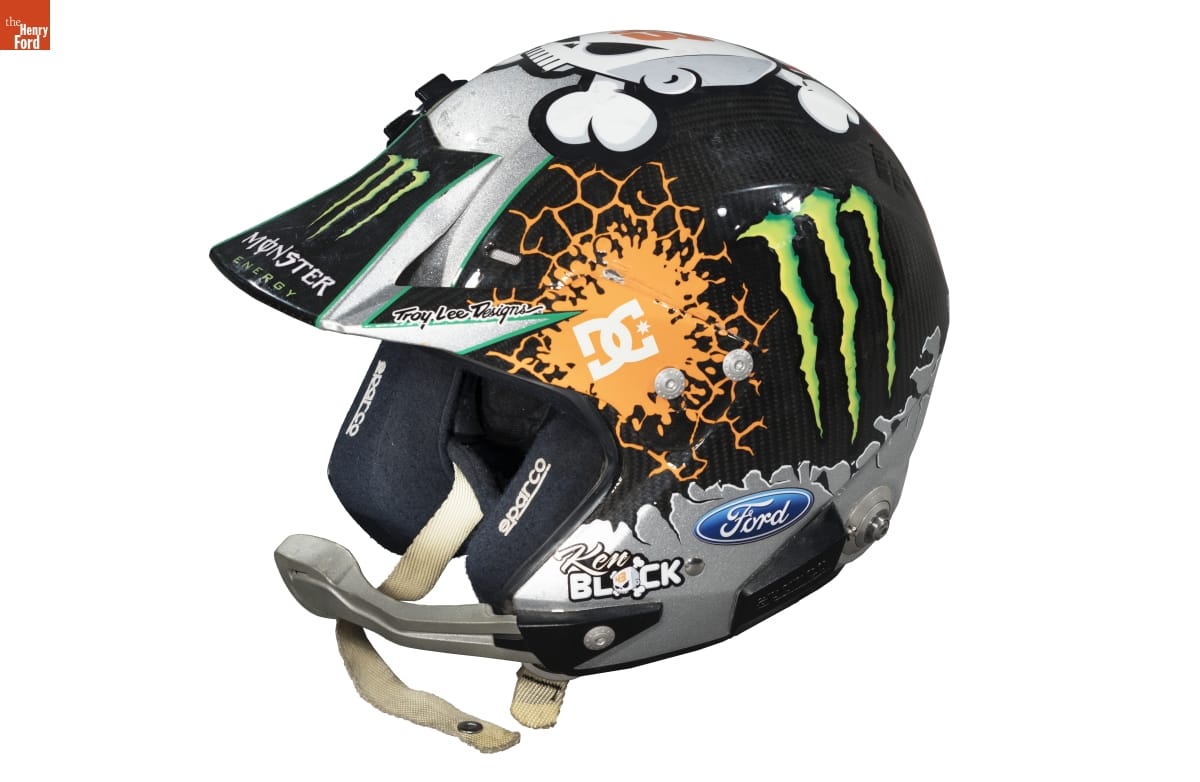 Encouraged by the high view count, Block released a second video on June 1, 2009. With his title, Gymkhana Two The Infomercial, Block made it clear that he was essentially creating long-form commercials. But viewers didn’t mind. Gymkhana Two, with its wilder stunts and slicker production, formally kicked off what would become a series of mini movies spotlighting Block’s automotive aerobatics.

Locations for the shoots varied, from glamorous Dubai to industrial Buffalo. But each video followed Block’s winning formula: a “DC” logo, an establishing shot of the locale, slow-motion run-bys, and enough burning rubber to keep a Toyo Tires dealer smiling for weeks. Perhaps fearing he’d run out of ways to top himself, Block closed the initial Gymkhana series with Ken Block’s Gymkhana Ten: The Ultimate Tire Slaying Tour, released on December 17, 2018. The 19-minute film saw Block in five different cities around the world, including – for the first time – the Motor City itself: Detroit. Together, those ten Gymkhana videos received hundreds of millions of views on YouTube – a soaring success by any definition.

Block’s rallying career continued all the while. He set up shop in Park City, Utah, and formed his own Hoonigan Racing team in 2010. (The name was a play on “hooligan” and “hoon” – an Australian slang term for reckless driving). Block left Subaru for a new sponsorship deal with Ford Performance. He continued to post strong results in Rally America and World Rallycross Championship events, and he won five X Games medals in RallyCross. More recently, Block competed in the Baja 1000, one of the world’s greatest off-road races, and earned a fourth-place finish in the trophy truck class.

Block parted ways with Ford Performance in 2021. His most recent collaboration saw him working with Audi on his first electric Gymkhana car. The Electrikhana video, posted on October 25, 2022, had Block and his “Hoonitron” Audi S1 shredding along the Las Vegas Strip.

When it came time to design our Driven to Win: Racing in America exhibit, we agreed from the start that Ken Block had to be included. To us, Block perfectly represented “performance” in two forms: his ability behind the wheel, but also his artistic appreciation for the entertainment side of the equation. Perhaps more than any other driver in the early 21st century, Ken Block knew how to put on a great show.

Working with Block and his Hoonigan Racing team, we acquired the 2012 Ford Fiesta driven by Block in one of his most popular videos: Gymkhana Five: Ultimate Urban Playground; San Francisco. Along with the car, we collected the suit, helmet, sunglasses, and shoes he wore during the shoot. San Francisco – with its steep hills, switchback streets, and Steve McQueen heritage – was the perfect setting for a Ken Block video. When posted on July 9, 2012, Gymkhana Five received more than 5 million views within 24 hours. (At this writing, it has 114 million total views.) While we would have been thrilled to acquire any car used by Block, the Gymkhana Five Fiesta was particularly special. 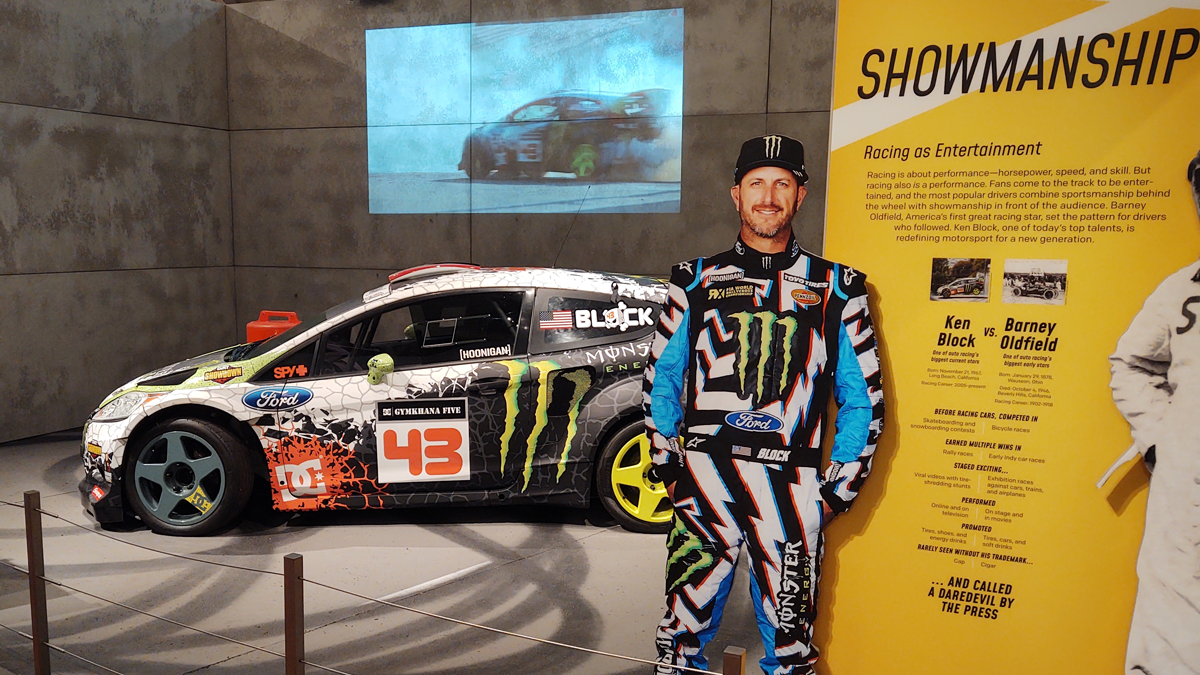 In Driven to Win, we compare Ken Block with Barney Oldfield, an earlier racer cut from the same cloth. Like Block, Oldfield combined on-track talent with a larger-than-life persona. Though separated by a century, both drivers came to racing from other sports (in Oldfield’s case, bicycling), both became multimedia celebrities, and both earned multiple competitive victories. It’s a reminder that some racing characteristics are truly timeless.

Block was kind enough to sit for an interview with us for our “Visionaries on Innovation” series in November 2019. We asked him how he’d like to be remembered – a question we ask many “Visionaries” participants – and he gave a thoughtful answer. Block noted that, while he didn’t have as many wins as a Colin McRae or a Michael Schumacher, he approached his racing from a different perspective. Block certainly considered himself competitive, but he also (rightfully) thought of himself as creative. It was that trait, his creativity, for which Block hoped to be remembered.

And that’s exactly how Ken Block is being memorialized today – as a creative visionary who took motorsport in a new direction for new audiences. It’s a legacy well worth honoring.